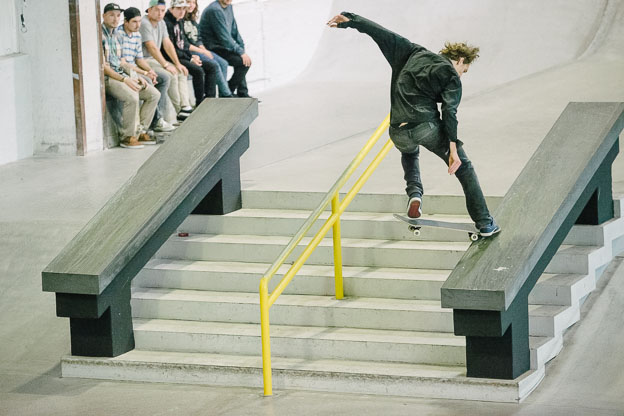 After three days of schmoozing and boozing in Berlin at Bright and Shitfoot it was time for the Nike SB Berlin Open. Saturday was the qualifiers where most of the skaters sweated out their hangovers in the unventilated Nike SB Shelter. After attending last year’s Berlin Open it was immediately apparent that the level of skating had really been taken up a notch this year. After 540 bigspin flips, backside nosebluntslides, switch back lips and nollie flip crooks were thrown down 40 skaters had qualified for the semi-finals to take place on Sunday. But before that happened there was Lennie’s Fox Track race on Saturday evening. 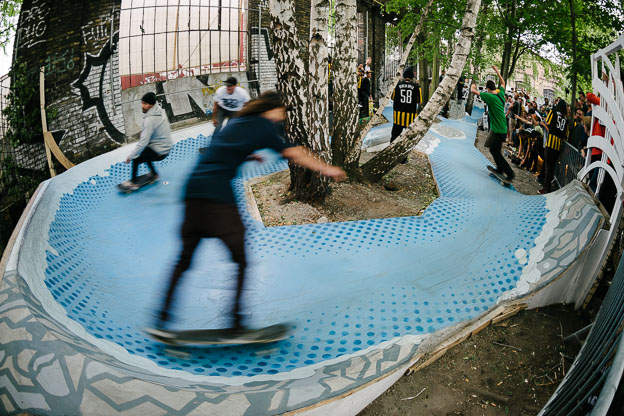 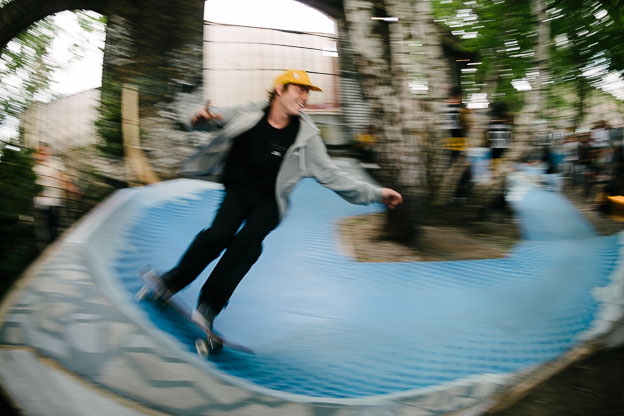 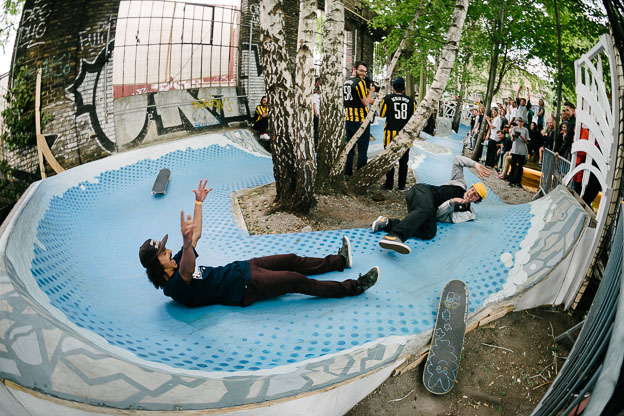 A newly constructed bowl/snake run by Lennie Burmeister (and painted by Rob Mathieson) at the Skatehalle was the locale for a fun-filled, alcohol-fueled skate race. It started off as time trials with two-dozen skaters entering and then, it morphed into a comp with beers for the best tricks and crowd ooooohing slams thrown in the mix. At the end everyone was shitfaced and only two skaters remained: Oskar Hallberg and Simon Karlsson. The crowd decided that these guys both had won so Oski and Simon proceeded to rip the winning check in half and split it. Everyone celebrated into the wee hours of the morning at the bar and Cassiopeia. 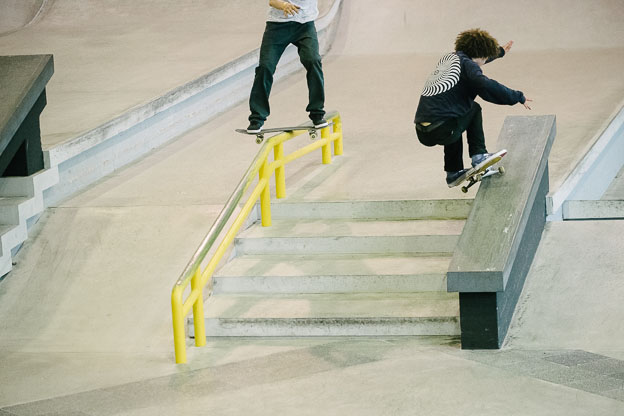 Nassim Guammaz smiths up the hubba whilst a headless man boardslides.

And then it was Sunday: time for the semis and finals. One of the craziest tricks to go down was Adrien Bulard’s feeble grind on the handrailing that went up to the vert ramp. After time had been called on his run in the semis he got the judges attention by staring and holding his index finger in the air as to say ‘one more’ reminiscent of Jamie Thomas. He cleared all the spectators away and with a short two pushes feeble grinded the biggest rail in the park he could find. This earned him a place in the finals where there, in his finals run, he bizarrely feeble grinded the rail again. The crowd went nuts though so I guess he was just giving the people what they wanted. But I would say best trick thrown down in the finals was Carlos Ribiero’s first try switch flip back tailslide down the big hubba. It was completely out of the blue and no one had even seen him attempt it in the warm-ups. 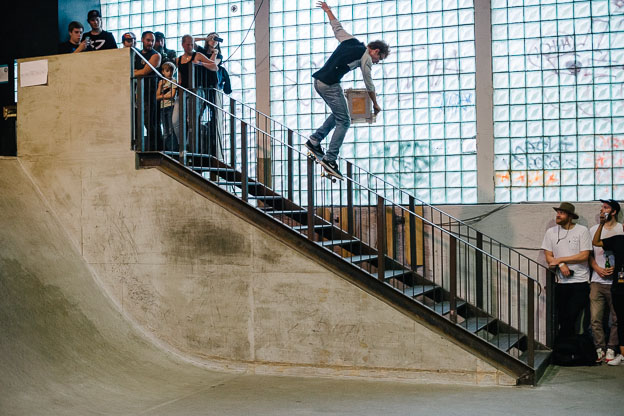 The super finals saw the top three placed rippers skate head to head to see who took the top spot. Norway’s Kevin Baekkel skated against Brazil’s Carlos Ribiero and France’s answer to Ryan Sheckler: Aurelian Giraud. Kevin amazed with footplants and wall plants on the bricks of The Shelter and Carlos probably didn’t do any tricks that weren’t switch or nollie. Aurelian laid down frontside bluntslides to flip out on the small rail, frontside flips over the driveway rail, kickflip back lips and a monstrous kickflip and a board-breaking hardflip off the vert ramp into the course. 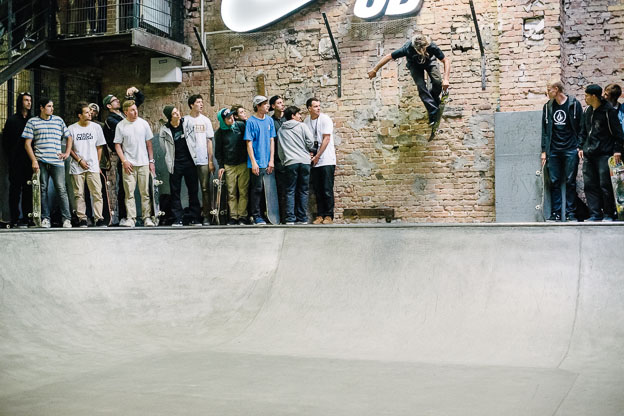 Three skaters with completely different styles and bags of tricks took the top spots so this was nice to see. After it was all said and done Aurelian took first, Kevin Baekkel second and Carlos Ribiero third. 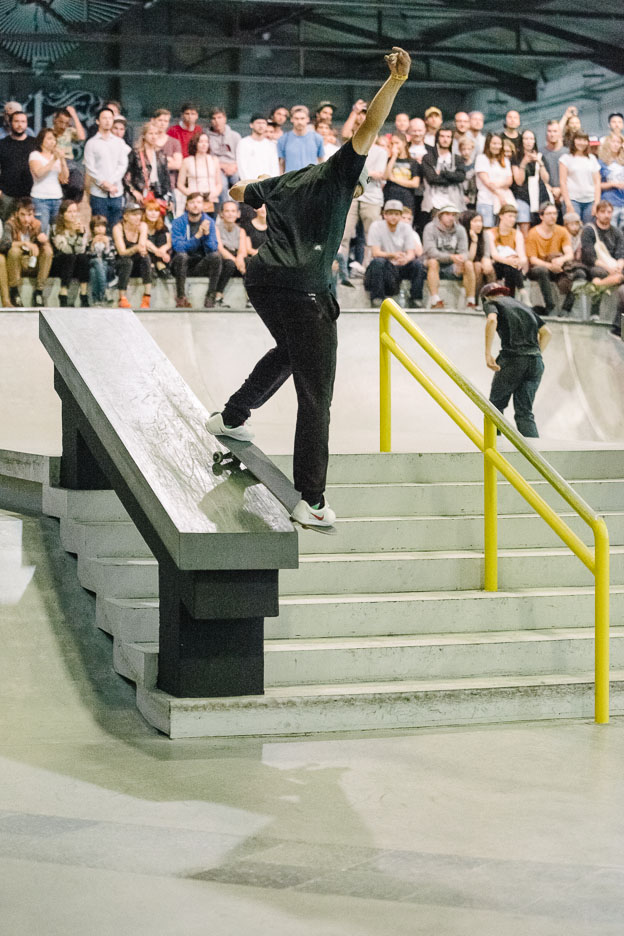 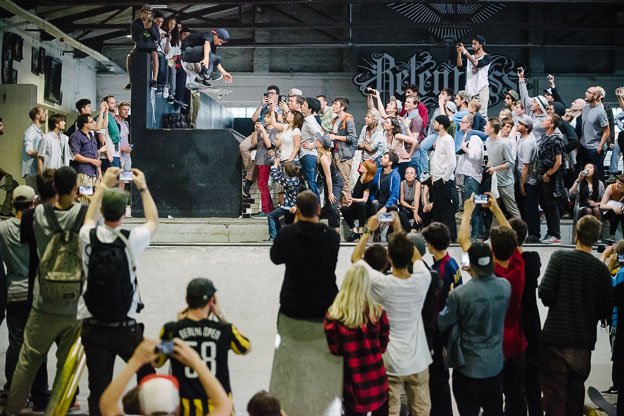 After the finals was the best trick. So many things were thrown down it must have been a headache for the judges, but they decided to award Brazil’s Neverton Casella as the best of the best for his nollie heel back noseblunt down the big hubba – boom! 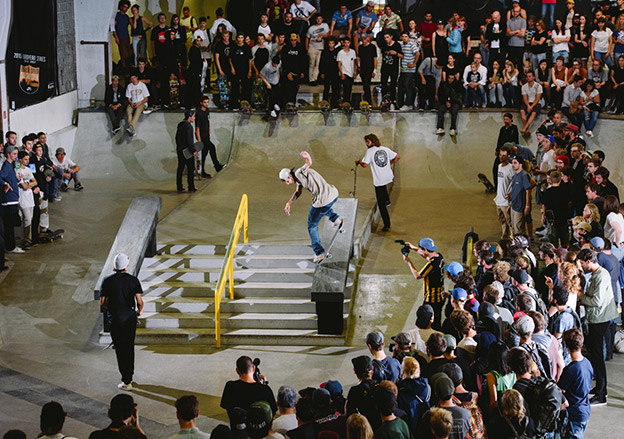 All in all a great weekend and great skating (and great drinking!). See you there next year! 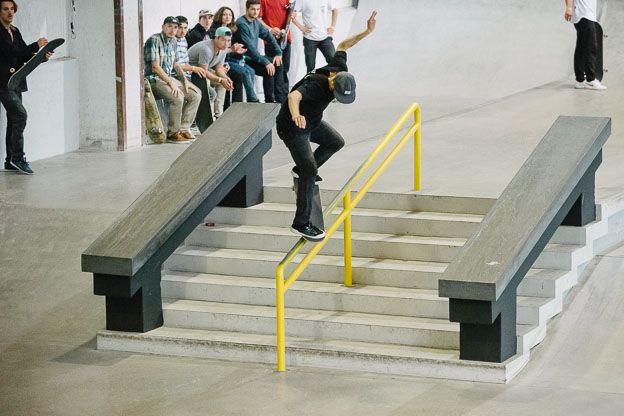 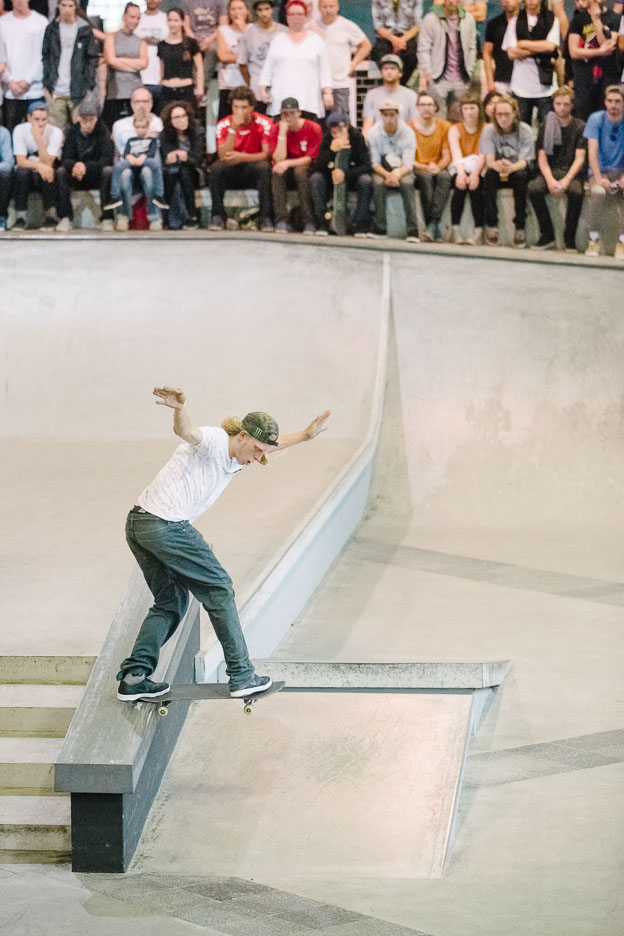 Tim Zom, gap to back tailslide.