Vivien Feil, frontside nosegrind 180. All photos are by Sem Rubio.

My plan was to travel to Bordeaux to link up with the Magenta guys and get a feel for what daily life was like in their hometown. Bordeaux is home to the Magenta headquarters as well as Vivien Feil and Glen Fox. Unfortunately when I visited last October, I had missed Leo (Valls) as he’d flown off to Japan just days before. But luckily Soy Panday was down from Paris for a visit that week. I got to stay at the Magenta HQ and soon realised that the Magenta clique was much larger than just the names you see on the Magenta pro boards. Magenta is really rollin’ deep in Bordeaux! For various reasons this article got shelved for a bit, but luckily it’s now finally seeing the light of day. So although the photos shot by Sem Rubio are from four days last October I talked with Vivien recently to see what had been going on with him and Magenta in the past six months. -Will Harmon

Will: So what’s new and what has been going on with Magenta since I was last there in Bordeaux in October?
Vivien Feil: Well a lot has happened actually. A big one was that Soy (Panday) got Cancer. When we found out this, we had to slow down a bit to deal with that and adapt. The good things is now he’s cured and he’s finally better. Now Soy has moved down to Bordeaux to help get things back on track and get some support. Also Tavu (Olivier Ente) has relocated here from Lille. He’s been helping us out. So many people come by here and visit to skate. We recently had Nikola (Racan) come from Croatia plus loads of other friends from Japan… Just so many people stop through Bordeaux.

And when I was there in October your girlfriend was pregnant…
Yes I had a second kid since you were here last! I’m really busy now, but it’s all good. 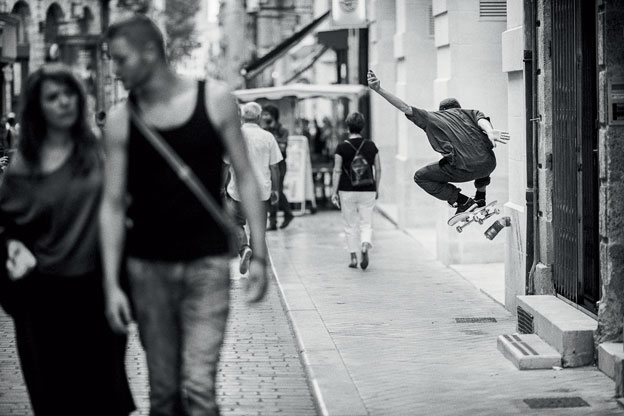 How did your 5-year anniversary exhibition and pop-up shop go in Paris last week?
Yeah it was awesome. We were right next to République so we could skate all day, hangout and drink beer. We had an art show with Jean’s (Feil) photos, Benjamin’s (Derberdt) photos, Soy’s art, Tavu’s art and some other friends. Richard (Hart) had a photo. It was really cool; loads of people showed up. We blocked the street! The opening night the neighbours were not happy, which is always a good sign! (Laughs)

So was there a lot of the Magenta crew there in attendance?
Lui Araki, who we support, came from Japan. We had friends come from all over, but not the whole team. Jimmy (Lannon) is hurt right now. He’s hurt his hip. Ben (Gore) was a little tight with money. So we mostly kept it French.

Gaetan (Salvignol), your sales guy, kills it at skating as can be seen in this article. I remember before you talking about so many people being part of the Magenta family even though they aren’t a Magenta Pro or official Am or whatever. Can you talk more about the Magenta family and what that means?
Yeah well basically we hook up all our friends pretty much who are not hooked up by somebody else. There is a bunch of people, not only in France, but all over that we support. Liu Araki is one of them. He’s an older skater from Tokyo. He’s amazing. We hook up Masaki Ui here in Bordeaux. Also Yoan (Taillandier) also gets stuff… All the friends we skate with you know. If you are skating with these guys all the time, you know you don’t really want them to have to go to a shop to buy a full-price board. 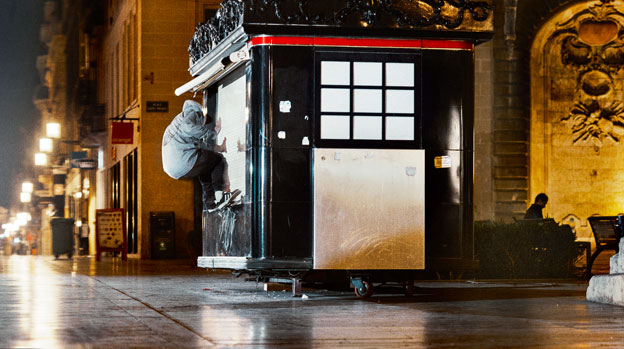 So essentially you are building this big community of Magenta followers…
Yeah sure, it’s just to get people psyched. We like to hook up dudes that share a similar common view about skating rather than just a few select dudes. I think with skateboarding, if you don’t have the community around it then you are going to quit eventually. So many people move to places just because there is a better skate community there. I think it is super-important to stay stoked. I mean human beings do that – they tend to try and have a community of supportive and like-minded individuals around them. I mean if you are a brand and it’s going well then you can hook up all the friends. Why not!

When I was there last Glen (Fox) was working on his welcome part. Now that it’s out, the question everyone asks is: Was any of Glen’s footage sped up in that part?
Well that’s the thing… No. That’s a
big myth. The style of filming created the myth that things were sped up. But if the point of your filming is to convey the energy of skating and stuff like that well then it means that if you film it really good it might look sped up, especially with the VX1000. So the answer is no, it wasn’t sped up. When people see him skate in person they’ll lose their minds! 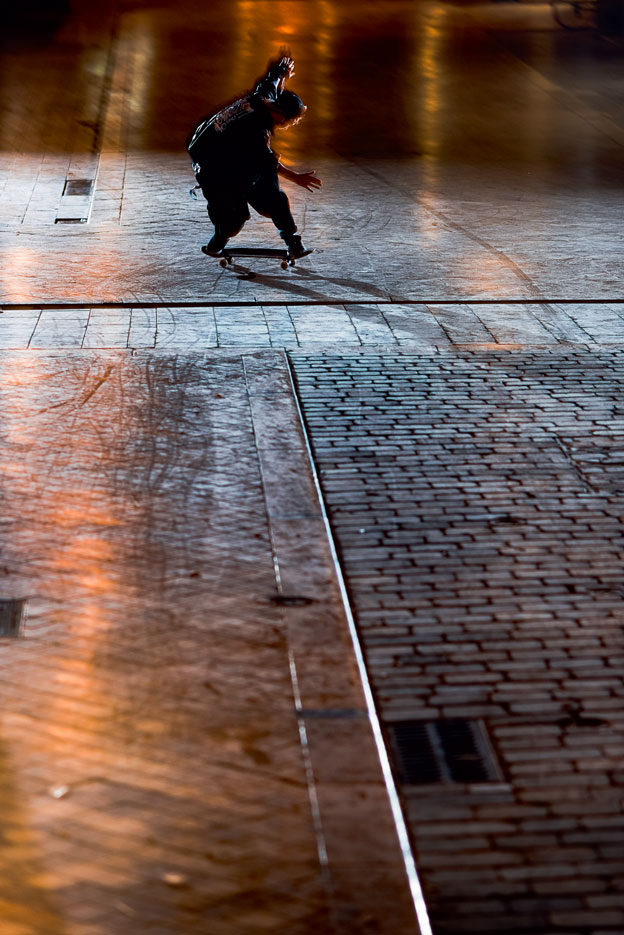 How important is the relationship with the filmer for the brand’s video projects?
It’s very important. The filmer has the way to carry the message and he also holds the key to how the images are going to look. He’s an artist. You know if you look at Yoan he’s not on a schedule for anything because he’s an artist. He does whatever he wants to do. He’s going to bring an eye to it; he’s conscious when he films. He’s not there going: “Oh this will work like that… This is fine.” No, he’s thinking how he can he get the best. He thinks about the little things. So he helps us. We can see that he has this energy when he films and that in turn gives us energy. It helps us focus. (Editor’s note: Soy Panday once said that: “Yoan is performing a trick with his filming. Every movement is thought out and Yoan is thinking about everything in that particular image, not just the trick.”)
It’s the same when shooting with a good photographer like Sam (Ashley) or Jean (Feil). Any good photographer is trying to find the way that things align and they are very conscious. And when you work with these people you have to be conscious of what you are doing.

So how’s Glen doing?
He’s doing well. He was in Paris, now he’s back with his girlfriend in Bordeaux. He’s been killing it: painting, skating and living the good life.

And when I was in Bordeaux last Leo (Valls) was in Japan. Is he back in Bordeaux now?
Yeah Leo was over there for months. Also Ben (Gore) went over there with Glen and Aymeric (Nocus). I think they had a great time. They were filming for Zach Chamberlin’s new video Sprinkles. 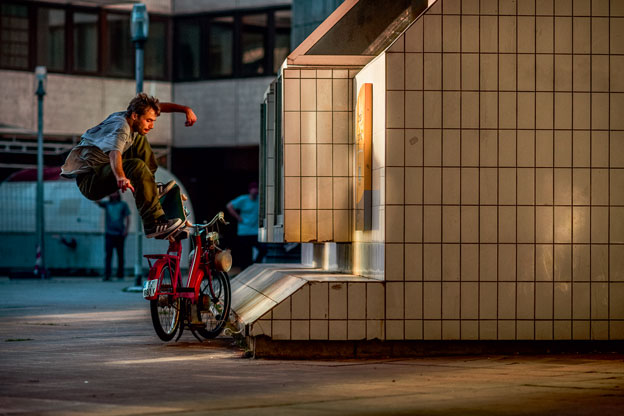 Vivien Feil, ollie into the bank.

Oh Zach has a new video coming out?
Yeah Sprinkles is coming out soon, sometime this year.

So is Leo living back in Bordeaux or San Francisco?
He is in Bordeaux now, but I think he is moving back to SF at the end of the year. He’s always travelling around.

Ok Vivien in another interview I’ve read with you, you refer to “our skateboarding.” Did you mean the Magenta way of skateboarding? And if so, can you explain what that is?
Our way or skateboarding… Basically from what I see would be to just follow what you love about skateboarding. Try to think about what first brought you to skateboarding. And try to stay away from the general trends… Try not to follow the trends like about what you are wearing or whatever because that really doesn’t matter. Try to understand why skateboarding is special to you and why you still are partaking in it after all these years. Think about your feelings and your emotions you had from the start and then try to work on your skateboarding based on this information – not from what it has become from everybody else. What did you see in skateboarding as a child, teenager, or young adult that made you change the course of your life? Usually your first instinct is the best.
When I say “our skateboarding” I’m not thinking about a powerslide or a no-comply it’s just the general idea that… You know I am doing a lot of powerslides now because it’s a new thing; it’s exciting. 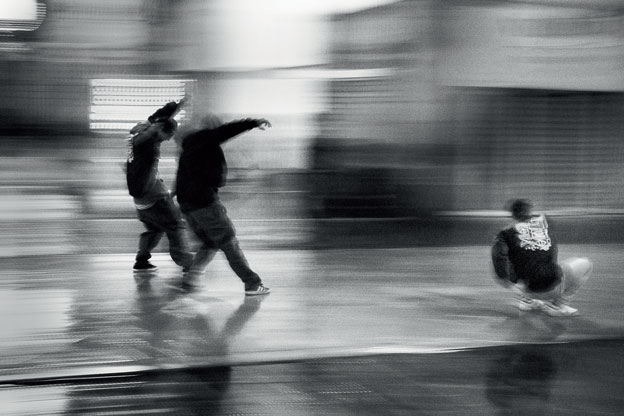 Well Bordeaux has a lot of marble floors that are great for powersliding!
Yes and I mean who cares who came up with it; it’s just skateboarding
you know. It’s whatever you want to do with it.
Also we are involved with the industry too and we’ve met great people within it and some not-so-great people too but that’s how it is. But we could tell we would not be skating long if we had to follow that mould. We wanted to create a mould that allows anybody to skateboard and really feel what it’s about. You don’t have to put yourself through the mental torture of learning everything by the book to enjoy what skateboarding has to bring. “Our skateboarding” would be a way to experience skateboarding in a way that you could skate forever. You don’t ever have to prove anything to anyone except yourself.

Heavy! But well said. So what do you have planned next for Magenta?
We got a lot of secret plans. Ha! (Laughs) No, but I don’t like talking about this stuff as it kills the vibe you know! We are going to take some trips though. We are thinking of heading back to the UK. We were just in Italy with the Chef Family. That video should be out in September. Soy and myself are also going to Switzerland… We are going to try and do a lot of small trips. I just want to try and skate a lot and not do too much office work. 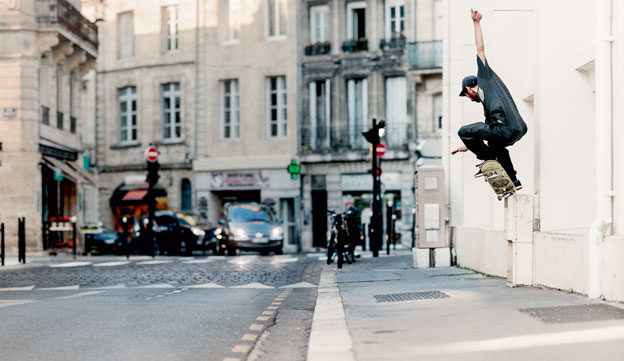 I feel ya. Gotta get out and onto the board!
Yeah I think after five years you look back and you are happy with your success, but then again you realise you’ve been spending an awful lot of time in an office. So this summer I’m
going to try and skate a lot.

So five years of Magenta already! Wow, what do you think about it when you look back?
Well it’s been a big learning process. Starting a brand all on our own isn’t easy. There is a lot of paperwork and you make mistakes, but you learn from it all. I think after five years you just want to go back to the way you were when we started. We just want to focus on the things we have fun with and try to skate a lot. You know we want to do what we are hyped on: make more videos, skate a lot and make some cool products. 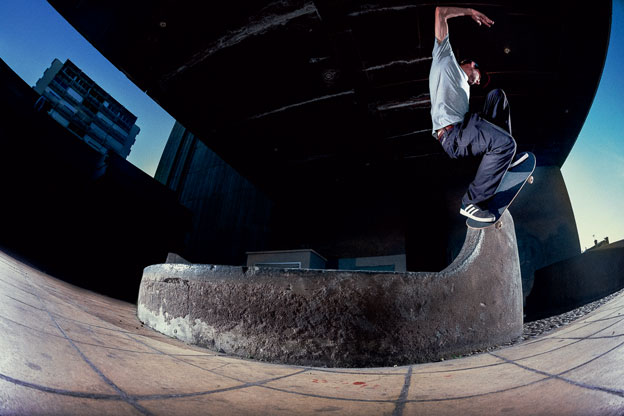