The comeback is pretty rare in skateboarding. The usual story is a skater gets coverage, gets his name out there, gets sponsored then goes pro. They are pro for a while, they get a few boards with their name on it, change a few sponsors and then the coverage starts to slow down. Half or shared video parts start to be the norm, they’re out of the limelight and then before you know it, they are done. No more pro sponsorship, no more money from skateboarding and that’s usually it. You don’t see anything from that skater anymore. They get an industry job or disappear from skateboarding altogether. But rarely, and I mean you can probably count the times on just two hands, a former pro skater resurfaces. Not just pops up again in a few montages, but he really goes in, gets a board again, a shoe sponsor, the whole nine. One such person is Pete Eldridge. Well the comeback kid was in town recently and we caught up with Pete to talk about sponsor hopping, working construction, couch surfing in Europe, what the Bootleg 3000 crew is up to now and more. Have a butcher’s…. 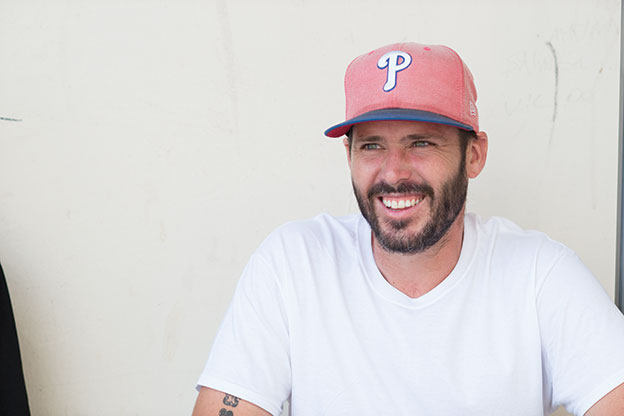 Will: You’ve had a wild ride of sorts with sponsors; let’s talk about the long journey that got you here today. What was your first board sponsor?
Pete: My first board sponsor was a little Philly company called Uptown. From there I got sponsored by Stereo and then to Zoo York. Then it was from Zoo to Bootleg; Bootleg to City. I worked construction for a couple years and then got on Mystery. And now I ride for Cliché.

Can you tell us about the time after City before you got on Mystery? How did Jamie (Thomas) approach you to get you on the team?
Well I was working and Jamie asked me to ride for Mystery. I mean he asked me to ride for Mystery years ago when he first started it. But at that time Bootleg was doing good and I decided to just keep ridin’ with the homies. And then a few years later I’m working construction and I’m sitting in the truck at like 4:30 or 5 in the morning and I was thinking: ‘Ah I just wanna sleep in and go skate! Fuck this!’ So I called up Jamie and was like: “Hey what’s up man? Can you hook me up? Can I get some boards? Maybe we could work something out and get something going?” So Jamie started sending me boards. Then I kind of quit one of my construction jobs and started doing random work here and there, but then skating a little more. Then I filmed a couple things and I showed them to Jamie. I told him I had been skating more and then he asked me: “So what do you want to do man? Do you want to be pro again or do you want to just do blue collar work and get boards? I’ll send you boards till the end of time you know!”

So I said: “Yeah, I’d really like to try and come back and be pro again.” And Jamie was into it and sent me more boards and asked me to come out to Cali. So from there I went out to Cali more often for a year and filmed and went on a bunch of trips. Jamie would bring me out to San Diego and I’d just film whatever I could and then basically I ended up filming a part. So when the part was done he put it out and gave me a pro board. That’s pretty much it.

So why did you decide to go to Cliché and how did Jamie take that?

Uh that’s a tough one. I don’t know if I can hit on that one, I’m sorry. I mean, things were different and a lot of pay cuts were happening and loads was going on at Black Box. I don’t want to name names or any of that kind of stuff, but things just kinda got weird.

Then Cliché went over to Dwindle and I was out skating one day and I saw that Jeremie and Lucas were over on Instagram or something. They were at the Transworld park skating and I live not too far from there. I was hyped these dudes were in town so I cruised over and hung out and kicked it with them. I spent a lot of time with those guys back in the day in Lyon. We just skated, drank and partied a lot and I became good friends with those guys. So then they left Transworld and then a week later I was skating with my friend Oli (Barton) and he had just been skating with those guys and he told me that Jeremie had said that they always wanted to put you on the team back in the day, but they didn’t have the money. Then Oli said that they were at Dwindle now and the timing might be right. I thought about it and since I had been friends with those guys for years and I was like: “Let’s do this!”

Cliché is a rad company and I wasn’t really sure where Mystery was going to go or what was going to happen with it. So that’s how I looked at it and I thought how cool it would be to go to Europe more with Cliché. I knew they would be doing a lot of trips. It’s a different vibe than just staying around in San Diego.

And you spent a lot of time in Europe during the Bootleg days right? I remember you stayed in London for quite a bit…
Yeah in the early 2000s I would stay out here for months and months at a time.

Was that weird for way back then?
Kinda. I mean people would go to all the Europe contests in the mid-nineties and stuff…

But it would just be for the contests right?
Yeah mostly. I mean we did a couple tours, but it’s just sick out here. It’s great meeting everyone and everyone is super cool. Everyone was into the same shit I was into then as well. I mean I’m a city kid; being from New Jersey you got NYC an hour on the train and Philly an hour away as well. I lived in New York and I lived in Philly back and forth and I realised that cities were the place to be. It’s easy to get around once you’re there and you can figure shit out. And if you see someone with a skateboard and you have a skateboard then suddenly you got a place to stay and someone to kick it with.

So that’s what it was at that time, I didn’t have a place back in the States, I was just couch surfing. So I thought: ‘Fuck it! I can just couch surf over here in Europe for a bit.’

Who did you hang with here in London?
Well Oli (Barton) lived here then, so I would stay with him. Or the homie (Christopher) Massey and then Danny Brady would stay. Also (Andrew) Brophy lived here at the time and also I’d be with Lev (Tanju), Chewy (Cannon), Snowy (Daniel Kinloch) and Joey (Joleon Pressey) – basically all the Southbank locals at the time.

Now I remember you first coming up and most of your footage was from Philadelphia and New Jersey. Where else have you lived and where do you live now?
Well I’ve lived back in forth in between Philly and New York for years. Sometimes I had a place, sometimes I’d couch surf, but mainly I’ve lived around there. Then I moved out to Colorado for a bit and kicked it there for a four years. Then I decided to just keep going out west. I mean I lived in LA during the Bootleg days in the early 2000s.

So where do you live now?
I live back in Los Angeles now. I just moved back there two months ago.

Do you think it is essential for skaters to re-locate to California to really make it as a pro skateboarder?
Not as much anymore. Cali just has nice weather – that’s why I like it.

So how did you get on adidas?
Around the City days I was on when they just started again, but they pretty much just had a flow team. So I did that for a while and I was only flow, but they would still hook me up even though I was working doing construction and shit. So when I got on Mystery they saw I was coming back and they started to support me more and more. Then I just got in a good place with them when I began skating full time.

Well I know you’ve been injured with your knee and stuff, but have you been filming with adidas for their upcoming video?
Yeah well I pretty much just started skating again so it’s been slow. I’ve gotten a couple things here and there, but not much as I haven’t been trying to push it too hard. I’m still not 100% with my knee so I don’t wanna go too quick with things.

How long has this video been in the works?
For the last year at least.

Whose part are you most excited for?
Dude, I can’t even say… Everybody! Everybody on the team is so different and unique and some of the shit I’ve seen in real life has been mind-blowing. It’s been crazy; a lot of good stuff has been going down.

What’s next for you Pete? What are you focusing on?
Just trying to get my knee better, that’s pretty much it. I’m just trying to come back and keep skating. I got it in me… I’ve got at least another 2-3 video parts left in me. I’ve got a little room to grow still.

I just watched Bootleg 3000 this morning when I was preparing these questions… You went in! I guess I hadn’t seen it awhile and I’d forgotten. You have like two full parts in there mixed into one.
Yeah that was good times. There was a lot of funny shit too… I mean half of that video we filmed in 30 days. Because we did this one trip across the US and it was like 29 demos in 30 days and then we street skated the whole time in between.

Wow! So do you still talk to (Mike) Maldonado and Elissa (Steamer) and all these people?
Yeah for sure. My boy Brian (Michaud) from that video he’s an engineer now. He’s the dude with the AK; he’s an engineer. And then Scott Kane does real estate… He just sold Brian a house out in Cali. And then he just sold Nick Trapasso’s house for him. And then Elissa is in SF doing Gnarhunters and Mike is doing his thing in PA still in Westchester.

I think that about does it.
Sick, thank you!