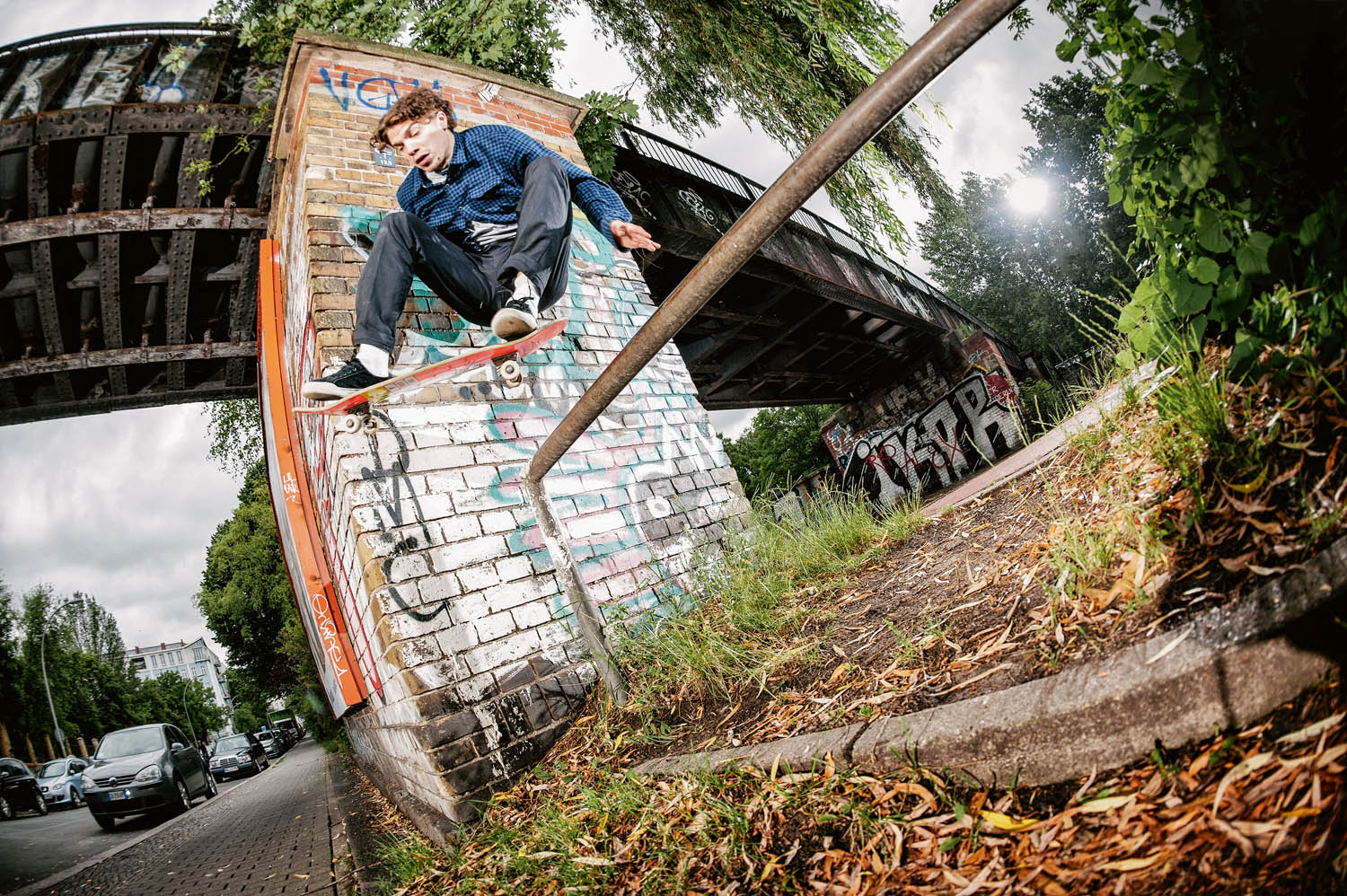 Simo Makela, wallride nollie. All photos are by Fabien Ponsero. Words are by Steve Forstner.

Street dancing in the rain tour would be the best title for this lil’ trip we undertook. We were not blessed with much sunshine or even just dry ground in general. But hey, it is what it is and we still had a good time, shared a bunch of laughs and yes, we played with our wooden planks as well.

Welcome to the European HUF team. This is the first official tour of the crew. The members are Simo Makela, Rory Milanes and myself. I have the pleasure of taking care of this squadron of skateboard artists. Also along for your visual pleasure was Mr. Fabi Ponsero.
Plus as special guest in Berlin one of Austria’s finest humans Sebi Dorfer joined in on some of the fun.
I guess in some way, tour is not the correct term for this adventure since we did not really tour around. We spent one week in Vienna being hounded by constant rain showers that somehow always knew when and where we wanted to skate. From there we jumped on a plane and flew to Berlin to see if the currywurst was a worthy opponent of Vienna’s sausage madness. The amount of sausages consumed on this trip were high to say the least. Especially in Vienna it is not easy to find cheap food later in the evening – so the local sausage stands become the go to. During the day it ends up being bread with wurst and cheese from the supermarkets and by the time you know it, a week has passed and you’ve only managed to eat one meal that did not include a wurst. Our French gourmet Fabi had a breakdown and decided he would not have another wurst. So he pretty much went on a 24-hour wurst strike, but made the mistake of solely consuming cheeseburgers from McDonald’s during this period. That ended up backfiring on him and he finally accepted that “The Wurst is the Best”. I guess Fabi was kind of the MVP on this trip but I will explain that later. 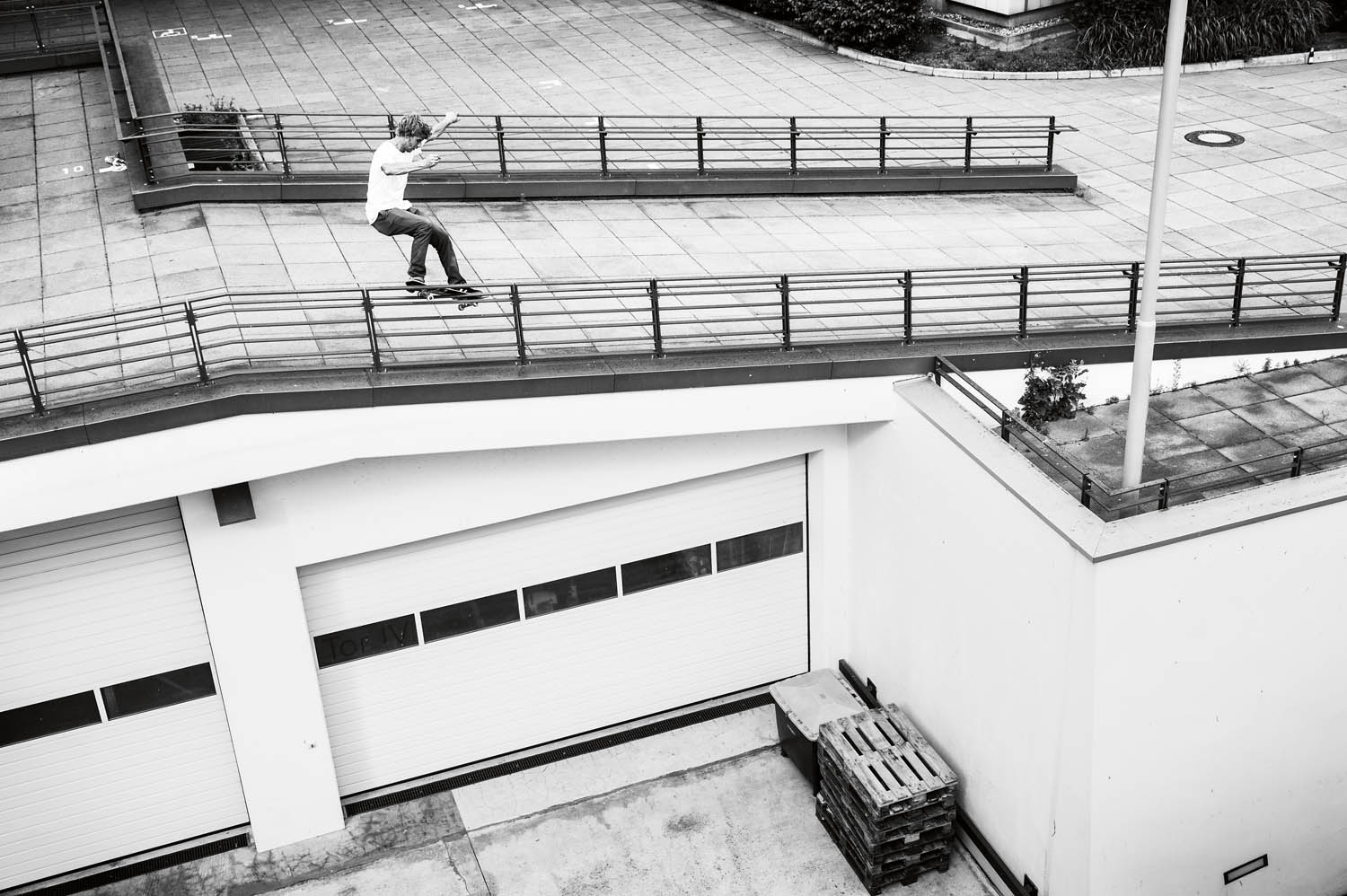 Like I mentioned before Vienna’s weather did not really like us. It rained everyday except one. This is always bad when you are on tour because you do feel that you have a certain obligation to collect photos and video material. Somehow it always started with a slight drizzle once we were nice and warmed up at a spot. You know that little drizzle where you think or hope it might just stop any second and be ok. Of course it never did and once somebody really started to try and skate the spot the downpour came. In Vienna Simo was the rain’s prime target. As soon as he would try to skate something the clouds would come rushing in. This definitely tested his mental strength and at times he would lose his composure. I can’t really blame him since it felt like he was cursed or blessed by the rain, depending on how you wanna see it. Eventually a can of beer exploded inside his backpack while on the Metro. From then on it was clear that Simo and Vienna would most likely never become pals. But somehow, against all odds, Simo did kill it in Vienna. Especially the famous Naschmarkt bump over bar with Jersey barriers… He slaughtered them.
Big thanks to all the lovely people that helped us out and came to shred with us in Vienna: Spoff boys, Muki, Sebi Binder, Johannes Wahl, Ante and many more. 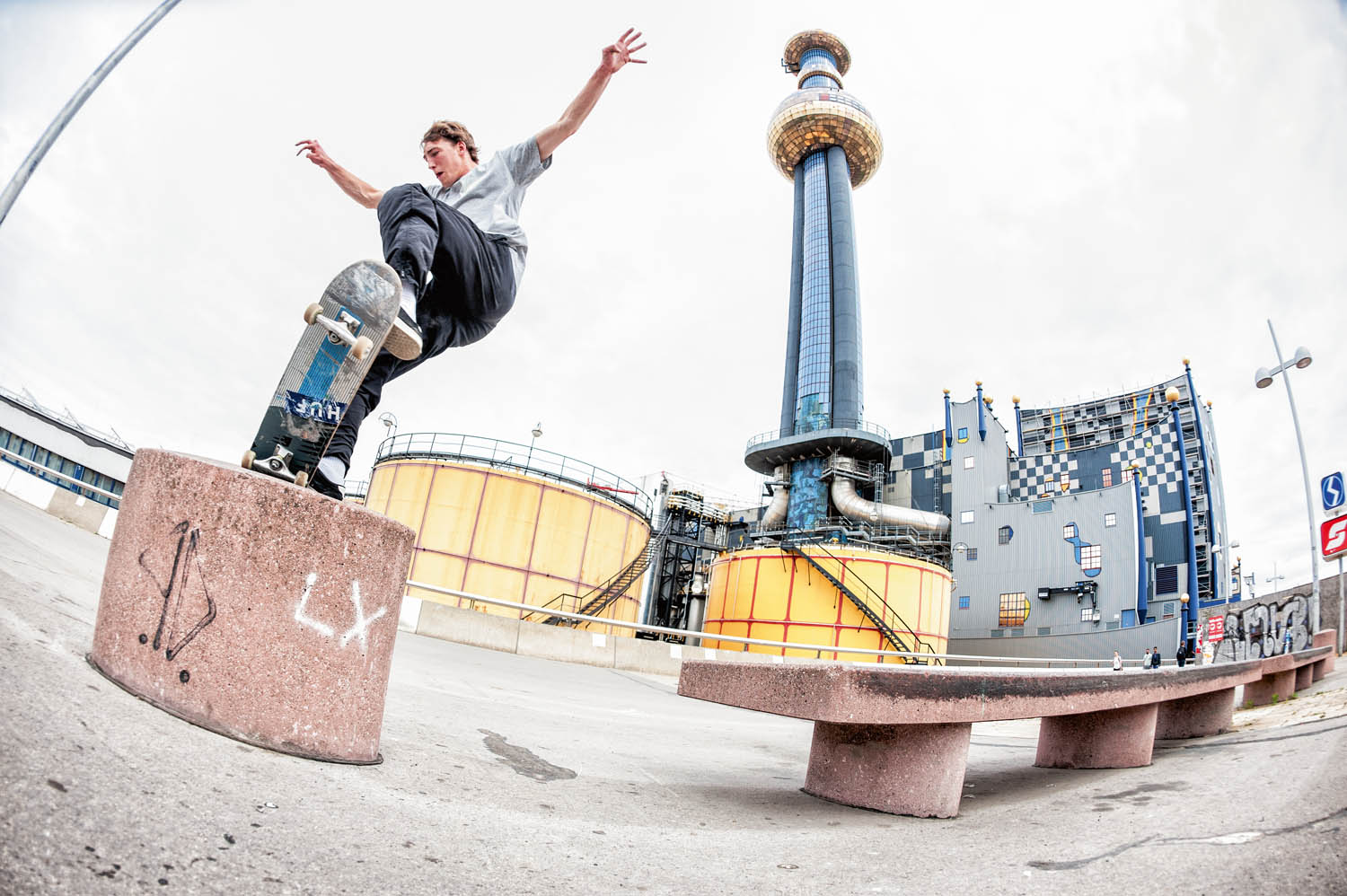 After a week of fun in Austria’s capital we boarded a plane to the German capital: Berlin. I love Berlin and know it very well since I did live there for a few years. This led to us arriving and enjoying a wonderful night at the Franken bar. I think it is the only bar in all of Europe that is actually pleased to see me when I show up. Obviously the next day was kind of difficult but luckily for us the rain from Vienna had followed us and now instead of occasional showers it just poured all day long for about 3-4 days. Now as nice as it is to see some rain when you are hungover, it does really start to suck after a few hours. Plus when it is a couple days of rain you start to see the madness creep into the skaters’ eyes. You can try to distract yourself by going to museums or pretend to be interested in art shows but nothing can replace that oh so very important time that you need on your skateboard. Luckily we did get a few days to skate in Berlin as well. The only problem was that we did not have bikes to get around. In Berlin it is really difficult to skate a lot of spots in one day without a bike. Distances are far and the ground is generally crap. Luckily I know the city quite well and with the help of Valeri Rosemako we managed to skate some spots. Plus if there was no spot really to be seen then Sebi Dorfer always managed to find some crazy stunt opportunity. Sebi was in Berlin with his trusted van “Walter” and decided to join our skate any dry moment quest. He is always a good man to have around since he will skate anything and when I say anything I mean anything. If there is nothing but a big crack in the ground he will find a way to skate it. 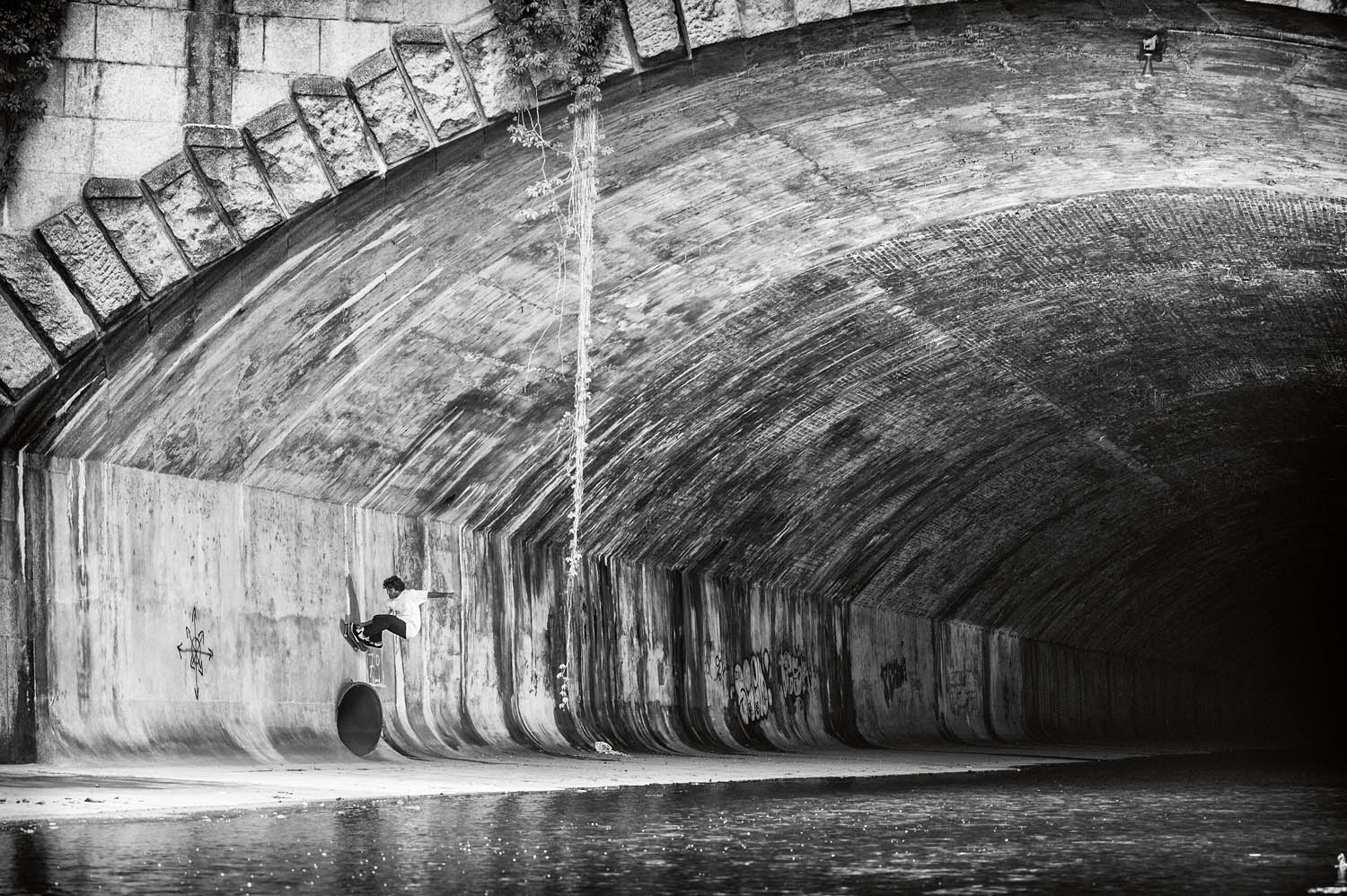 We did manage to eat better in Berlin since food is cheap and good, plus you can pretty much find anything imaginable. That was a relief because I don’t think my body could have handled another wurst.
Now I will come back to my claim that Fabi was the MVP on this trip. Fabi had been on tour for a month straight already before this endeavour, so obviously he was a tad bit burnt out. Then the rain came, which never helps if your spirits are already a bit low. Somehow he managed to keep it all going pretty well despite the fact that he was a bit on edge. Until the last night that is… Last tour nights are always great, you are happy and sad at the same time. You are happy that it’s over in one way but also sad to say goodbye to your homies. 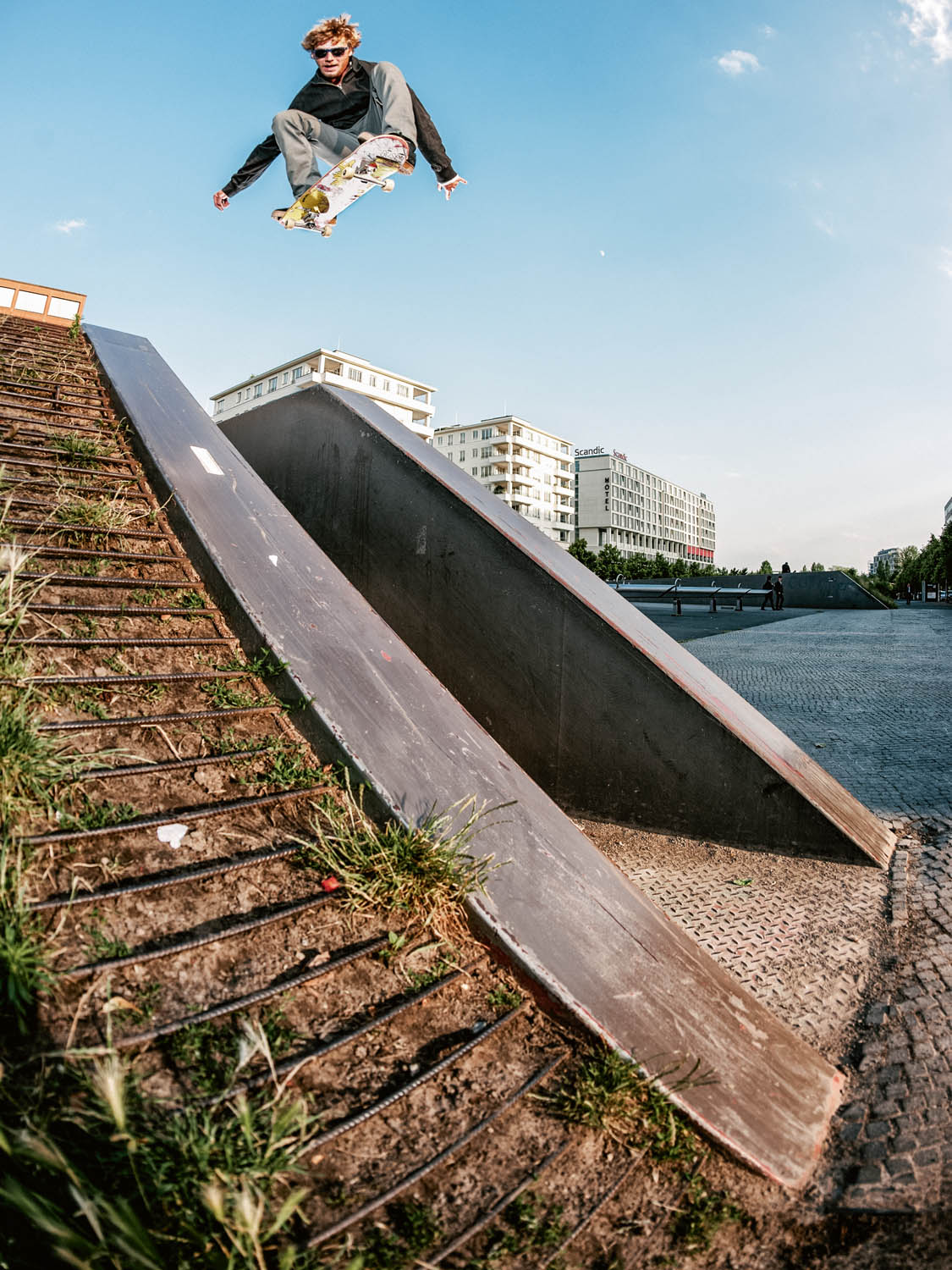 Our last night started out very well. We stopped by an art show of a friend and had some free beers. That always gets motivation levels up. After that we moved on to a bar with a massive crew. I could tell Fabi was gonna go gnarly because there were enough French speakers around for him to let loose. So my TM brain kicked in and I took his camera bag and tripods home to the apartment. I ended up being too lazy to go back out and called it a night. When I woke up I knew we would have to check out of our Airbnb flat, so I took it upon myself to clean a bit and get it all ready. Rory had already left the day before, so there were just Fabi and Simo left to wake up. I got them up and told them to get ready to leave. At this point Fabi had realised that he lost his phone the night before. This explained why his board looked like he had tried to skate a 40-stair rail. He basically spent the next two hours screaming around in French, hating on the whole world and repeatedly hitting himself in the head. Since according to him his whole life was in that phone. I did feel for him in a way but at the same time I had to laugh because it was like watching a lil’ kid throw a fit over not getting ice cream or something like that. At some point I managed to get him to pack his things and we left the flat. He was still so angry and did not want any help so Simo and me had to leave him by himself in the courtyard of the building. There was simply no talking to him. Normally I would not leave a friend behind but Fabi was actually not present at this time. Plus I knew he could take care of himself.

Well kids the moral of this story is: “Back up your shit to a computer.” Oh and have fun on your skateboard rain or shine.