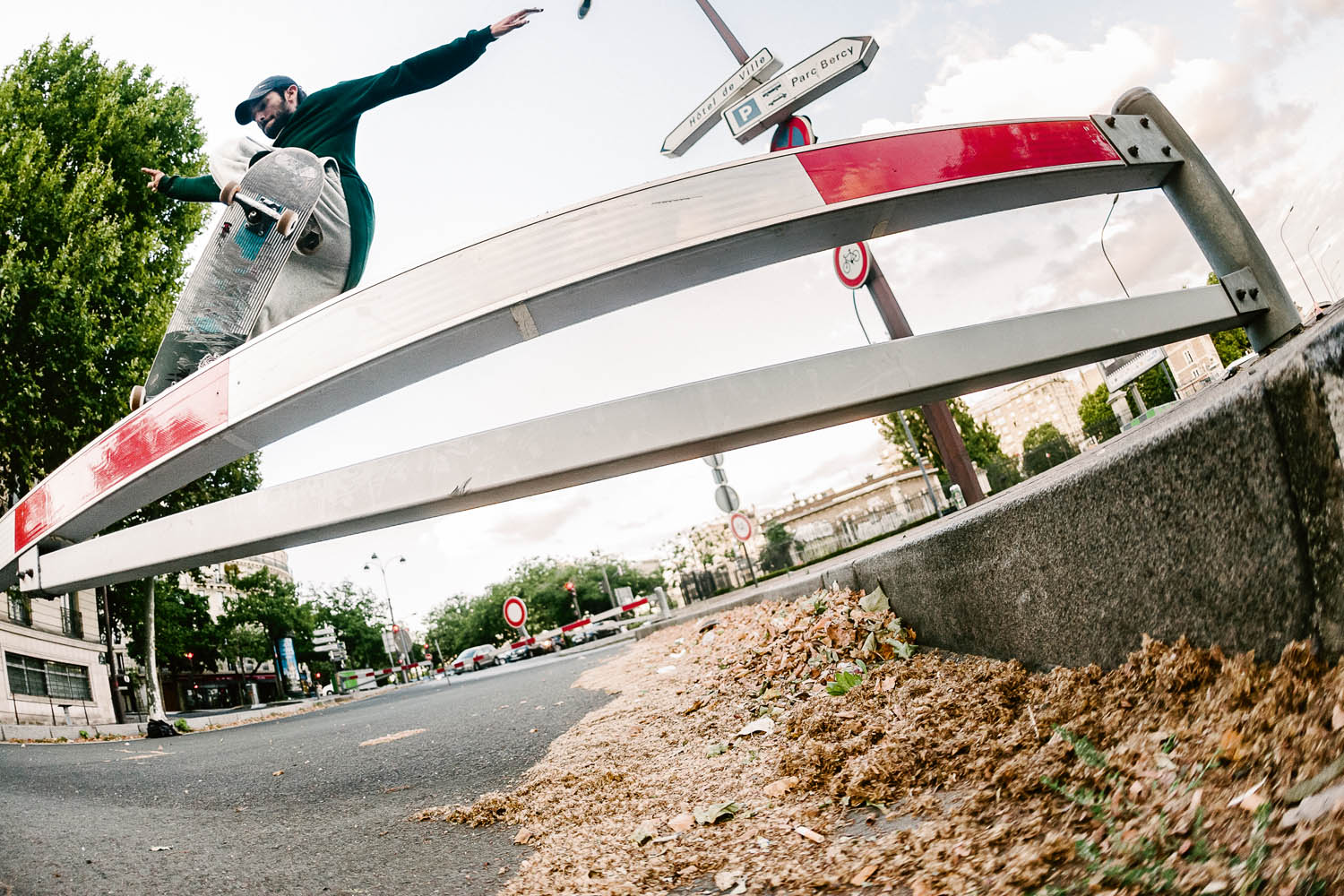 Frontside nosegrind. All photos are by Alex Pires.

We were really hoping to steer away from the Rich Homie Juan references for this one but the interview made it inevitable. We knew he was a ‘smooth operator’ but being offered a part in Gaspar Noe’s new film at four in the morning? Getting given a free Mercedes from 1988 out of the blue? Being in your twenties and having already properly lived in three different continents? The way he lives his life does just ‘make you feel some type of way‘.

How’s it going Juan? I recently saw you on French TV walking up the red carpet at Festival De Cannes. What was that about?
I’m good thanks! Well basically I’m in Gaspar Noe’s new film (Editor’s note: it’s a 3D film called Love) that was presented at the Festival. I initially wasn’t really into the idea of going there and having to walk up those famous stairs etc., but it was the only way I could see the film before its release, so I did.

What?! That’s insane! How did you end up getting a part in that?
About three years ago I met the director at an after party at my house and at about 4 o’clock in the morning he started telling me he had a part for me in his new film. At the time I thought nothing of it, assuming he must say that kind of stuff to loads of people all the time, especially when it gets to this point in the night/morning.
He did follow through though and about a year later he asked me for a portfolio. I told him I didn’t have one and that the closest thing I had to that was probably my Facebook and he ended up just telling me to come down for an audition.
At the audition he confirmed that he wanted me in the film, but added that I’d have to get naked in front of the cameras. “You’ll be naked, you’ll have sex with girls, there will be anal penetration and you’ll be getting your dick sucked”. Straight away I told him that there was no way I’d ever do that so we kind of left it there… That’s when he tricked me. Shortly after that he hit me up asking me if I could come over and meet the actors he’d picked for the film. He said he wanted to know what I thought of them. I was a bit surprised but I went down there anyway not thinking too much of it. Once I’d been introduced and chatted I remember wondering: ‘Great I’ve met them now, they seem like lovely people; so what? And why does he even care what I think?’. What I realised further down the line is that he was actually doing that to ask THEM what they thought of ME. Anyway after that he asked me if I was available that night to help the actors practice a scene: “We won’t be using it in the film, don’t worry, it’s just to help the guys rehearse.”
As soon as I showed up I knew there was more to it than that. Firstly because everyone there was calling me Julio (the role I play in the film) and telling me how happy they were that I made it, secondly because the room where the “rehearsals” were taking place was filled with massive 3D cameras. So I ended up doing what he asked me to do anyway and at the end he said that he was really impressed by my performance and that I should take the part. It was a bit weird because I’d never even considered acting before but I was given this opportunity by this incredible director and felt like I couldn’t turn it down. So I went for it and it was a really good experience. 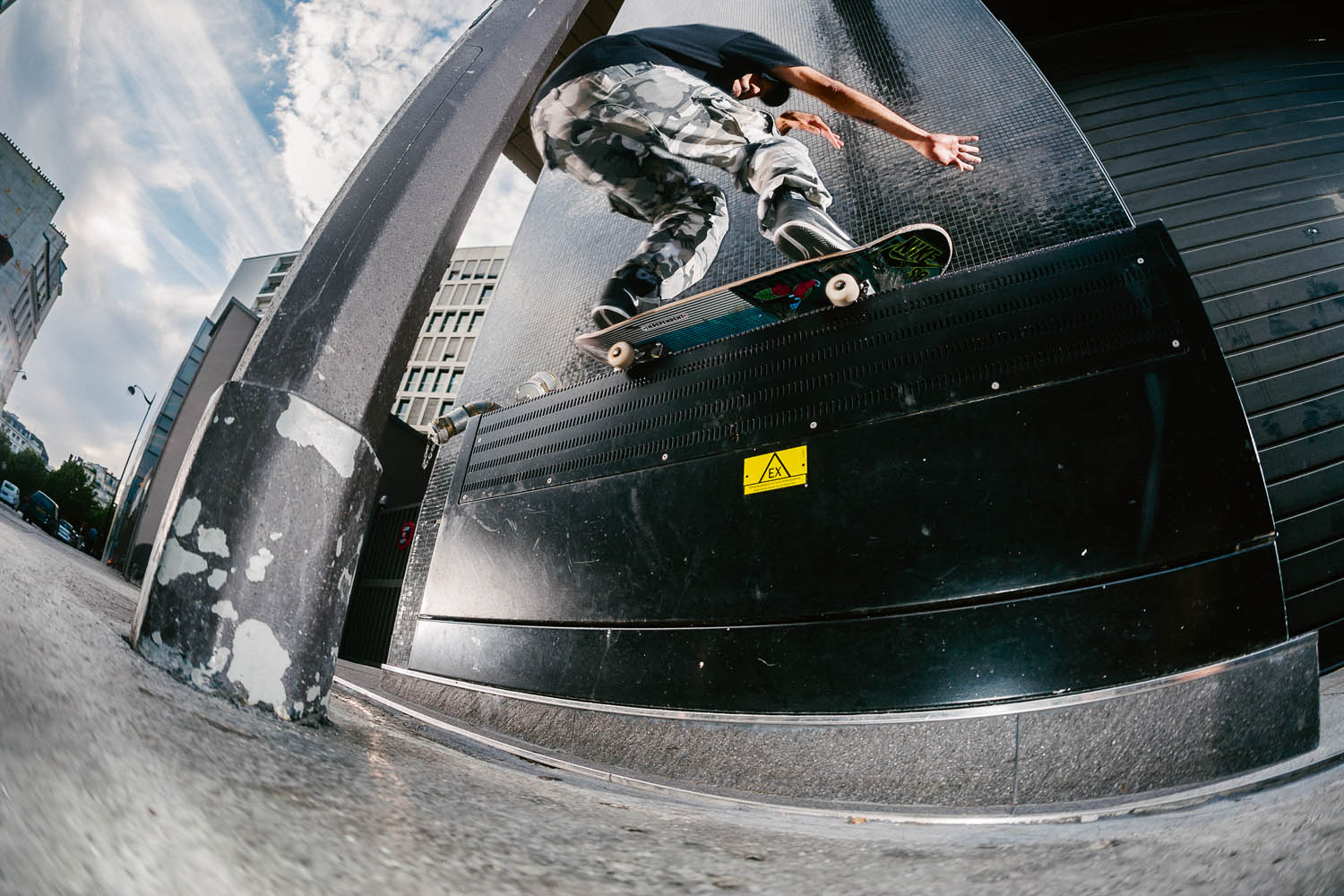 So you got naked in front of the cameras and did everything he’d mentioned before?!
No none of that, I told him I wouldn’t do it so those scenes weren’t in there.

But he still gave you an important part?
Yeah, it’s like the fourth most important part in the film. Gaspar wanted me to be the bad guy; the one that stirs shit up, deals drugs and fucks the leading character/my best friend’s ex-girlfriend etc. whilst remaining the most grounded. All the other protagonists go off the rails and end up a bit psychologically unstable by the end of the movie, but I stay fine.

Wow… I can’t wait to see it. Are you going to try and pursue a career in acting then? There’s been a lot of hype around this film, I’m sure getting some more auditions shouldn’t be a problem.
I don’t think so, no. I’m into skateboarding, that’s what I really love. Gaspar (the director) became a friend and he asked me to do it almost as a favour to him. If someone else approached me I doubt I’d say yes unless there was already a strong human connection between us and I was really into his idea and the artistic direction he wanted it to take. I’m not an actor and that’s not a world that I’m attracted to. I know a lot of people in Paris who gravitate to those circles and they’re the worst. I can’t picture myself working with people like that… So no I won’t getting an agent or anything like that if that’s what you want to know, haha.

But you did study something that had to do with film right?
Yeah, but I was more interested in what was going on behind the cameras – (filming, working with the lighting etc.) and that’s a completely different thing. When I was in high school in America I was the high school filmer. I filmed all the school’s events for about three years. My teacher was also the TV and Cinema production teacher and he got me really hyped on this stuff, which is partly why I moved to Paris, I thought it would be a good place to study that. I quickly realised that studying hard for five years to end up in an industry I disliked wasn’t a good idea. The artistic side of the industry I love, obviously, but the other one I just can’t stand. To me it’s just as bad the fashion industry. 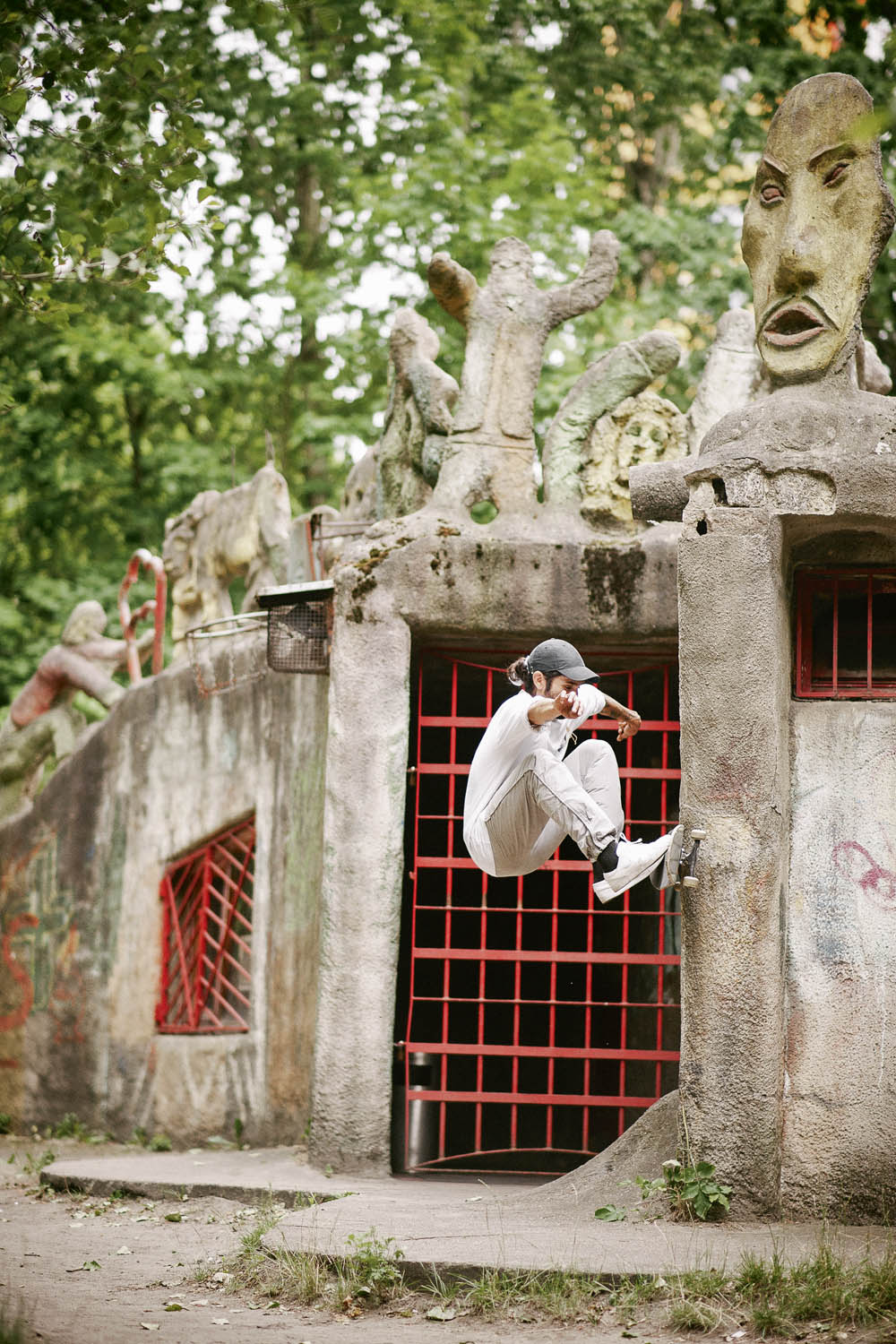 Which is why you quit studying that to do applied languages?
Yeah. It’s a Spanish and English degree and I already speak those languages fluently, which means that I don’t really need to attend any of the classes. It is what I need if I want to really focus on skating and go on as many trips as I want.

Can you remind us why you are trilingual? (Editor’s note: this interview was done in French)
I was born in Colombia where I lived until I was six, which is why I speak Spanish. We had to leave the country because of the violence and the situation with the drug wars. The biggest cartels were in Medellin and Cali where I was born and being in the middle of that and all the tensions with the revolutionary armed forces was becoming unbearable, so my family moved to Paris. My mother always loved the culture so it made sense. Then when I was 13 my family moved again, this time to Miami, where I stayed until I finished high school. I’ll always love the United States but the current system just wasn’t for me, so I ended up going back to Paris after that.

What aspects of the system are you referring to?
Mainly the fact that to be considered a productive member of society you have to go to a good university. At the time that really wasn’t where I wanted to be in my life. I didn’t want to do something that felt like high school. I didn’t want to go to a place where everything would be taken care of for me, where I knew I’d only be hanging out with the people I’d see in class or on the campus. Plus at that age it’s difficult to decide what you want to do with your life. Film was something I thought I could enjoy studying but it wasn’t my passion. I didn’t want to have to take out a student loan and be in debt for ages because the work market in US is terrible and I couldn’t get a job with my diploma. A lot of my friends from high school are in that exact situation right now and have to go back to living with their parents. 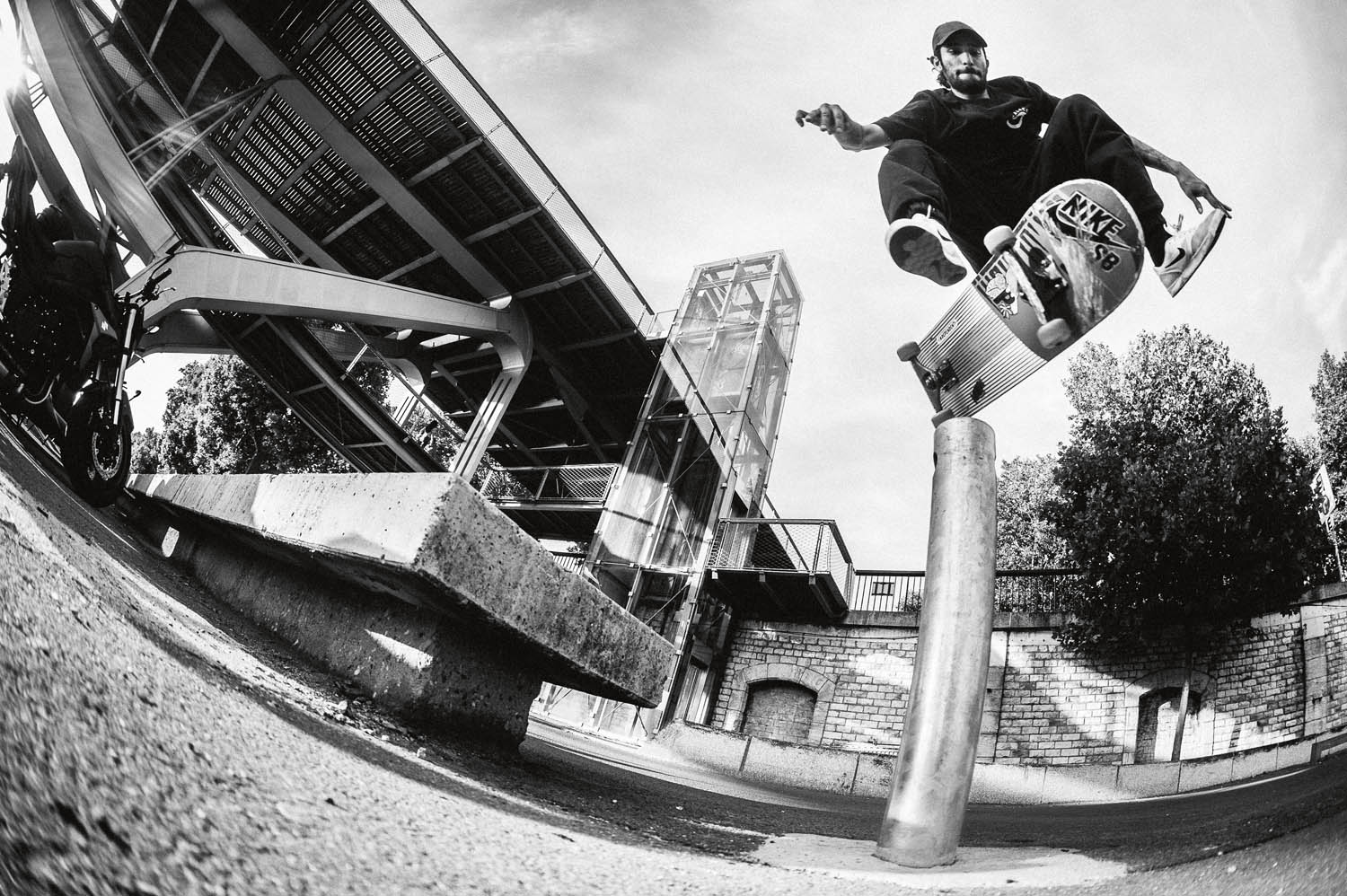 If I don’t fit a question about skateboarding in this now I’ve got a feeling there won’t be a single one. Has your current flexible uni schedule allowed you to get a lot of stuff for the Palace video?
Well I’ve filmed some VHS stuff in Paris but I think they want it to be entirely filmed in London now so I’m not sure what’s going to happen with it. I really want to go up there soon to get some more stuff. Hopefully I’ll do it towards the end the summer.

Got any plans in the meantime?
Well I’m about to go on holiday with my girlfriend. I think we’re just going to drive somewhere, maybe Marseille or Corsica. Not sure yet.

Will you go in the new car? Can you tell us a little bit about that one? Another good example of your endless streak of good luck…
Basically my grandma’s new boyfriend wanted to give her a car and ended up giving it to me, for free, as she already had one.

Well I hope good things keep miraculously coming your way. Right now that’s all we have space for. Plus we don’t really need our lives feeling any duller in comparison…Take care mate. 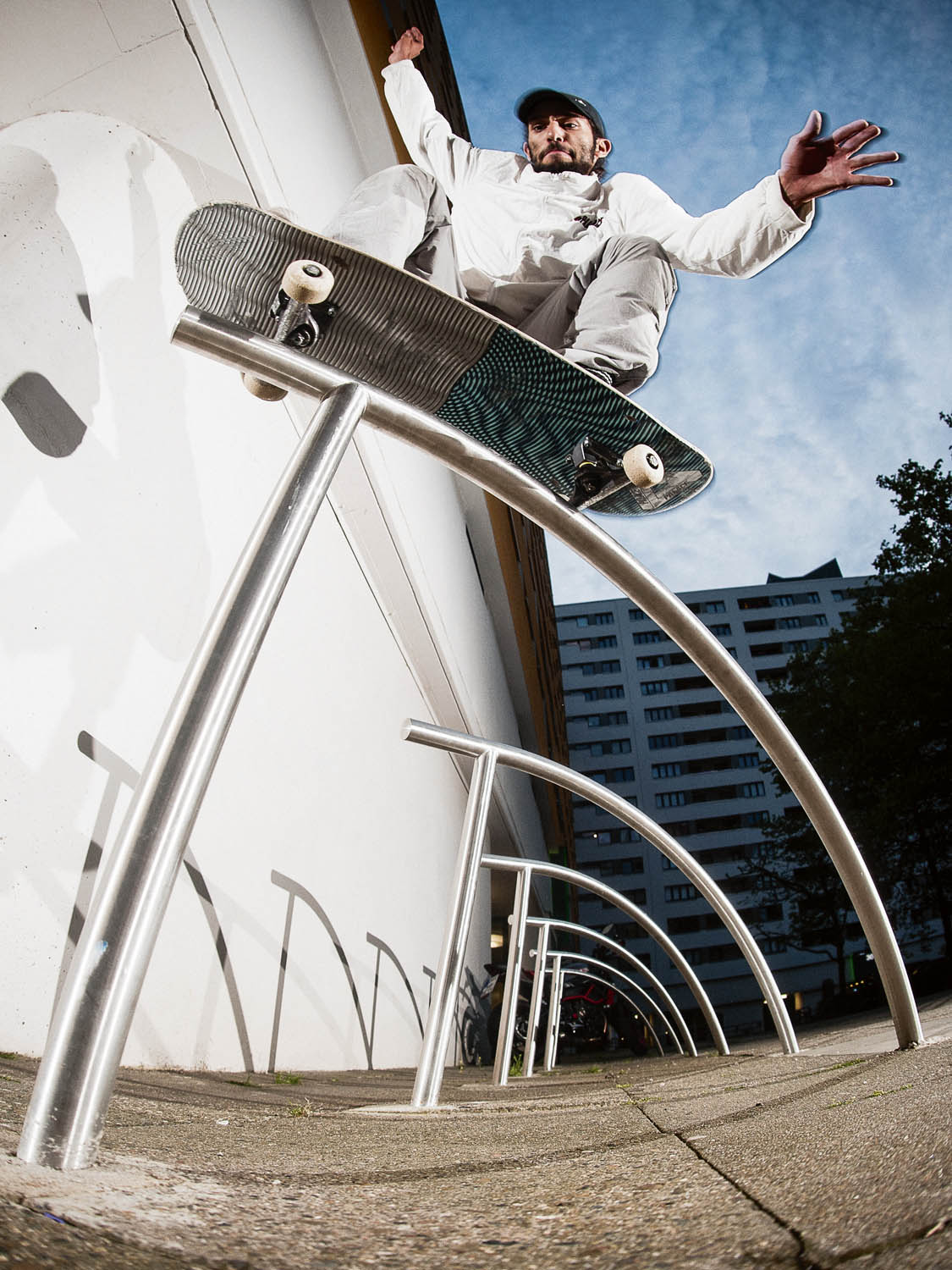