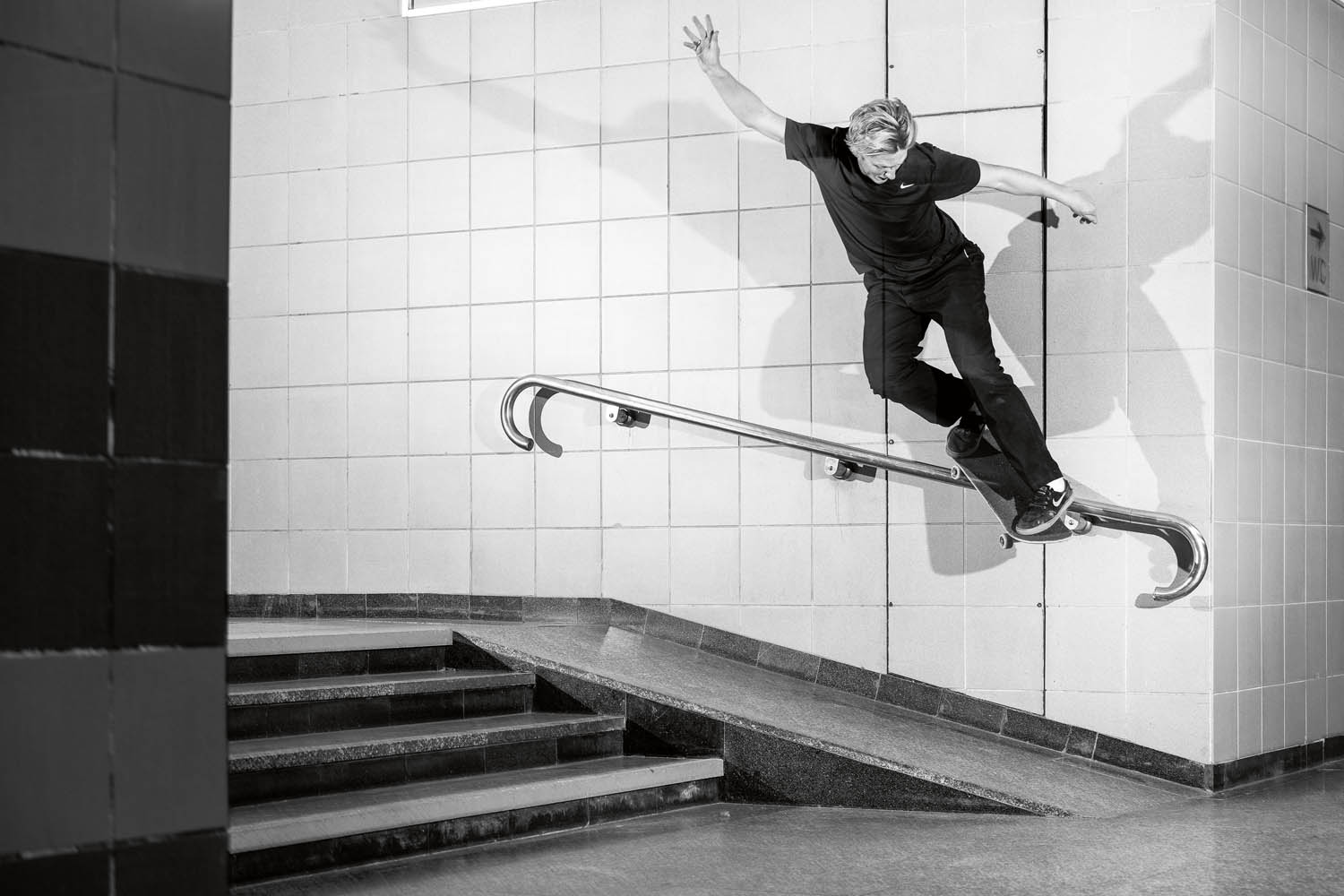 Photos by Marcel Veldman and words by Chris Jones

Following a Nike SB trip to Miami in April 2014 with Jakub Kaczmarczyk (Kuba), Michal Juras, Michal Przybylowicz and CEO of Xpensiv Shit Modest Mysliwski, I stayed in touch with Kuba and have since been trying to organise some sort of excursion to their hometown of Warsaw. After a year, myself, accompanied by giant baby Casper Brooker, travelled across the English Channel to the country’s capital with photographer Marcel Veldman in tow. 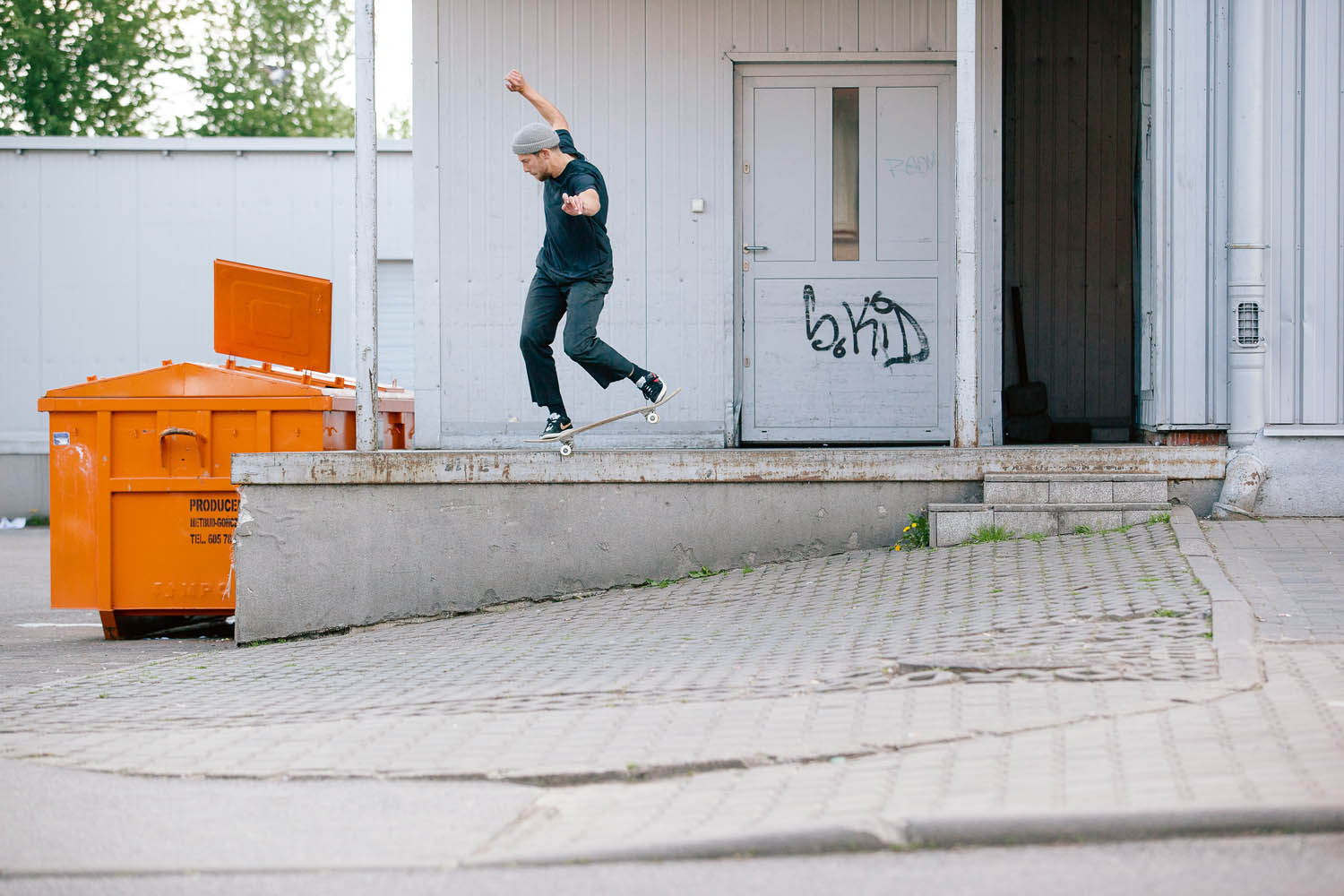 Prior to visiting Warsaw I had very limited knowledge of Poland’s capital. I was aware of the city’s troubled history, having to resurrect itself from previous invasions, wars and conflicts, which has led to the capital being coined ‘The Phoenix City’. These dark memories are still evident, an example perhaps being the ‘Palace of Culture and Science’ that was directly opposite the hotel we vacated. Being the tallest building in Europe it is noticeable from most corners of the city. Its undeniable presence led many Poles initially to criticise it, considering it to be a symbol of Soviet domination – a negative feeling that undoubtedly persists today. Despite my little understanding of Warsaw, I still had expectations as to what it could be like, one being a stereotypical generalisation of Warsaw being a hardened place with noticeable Western and Eastern influences, full of people drinking neat vodka everywhere. Although these assumptions were met to a certain degree, it was clear that the gap between Western and Central Europe is not as different as I expected. Instead, Warsaw upholds very similar characteristics to a lot of capitals around Western Europe, most likely a result of Poland’s membership to the European Union in 2004 since negotiations began around 1989 following the collapse of communism in Poland.

Micha Jura, quick-footed ollie up and over the channel.

Our trip was very different to what was originally planned between Kuba and me. A solo filming jaunt soon escalated in to a Nike SB funded mission. The Greek goddess of victory, Nike, transformed the floor I was expecting to be sleeping on into a fancy hotel with a swimming pool and a health spa. Although the outcome was not initially intended to be an article, morning sauna sessions combined with champagne breakfasts led to an improved level of productivity. An equation I think should be used more often on skate trips. Accommodation aside, our five day outing was no different to a lot of other skate trips in the sense that we woke up, fed ourselves, went skating all day, fed ourselves again, drank beer and went to bed. I also succeeded in my intentions of doing nothing cultural or educational what so ever, choosing to listen to Madonna and watch AVE’s part from the Vans video over twenty times with CaspB. This has resulted with me now being able to recite the entire chorus from Madonna’s hit ‘La Isla Bonita.’ 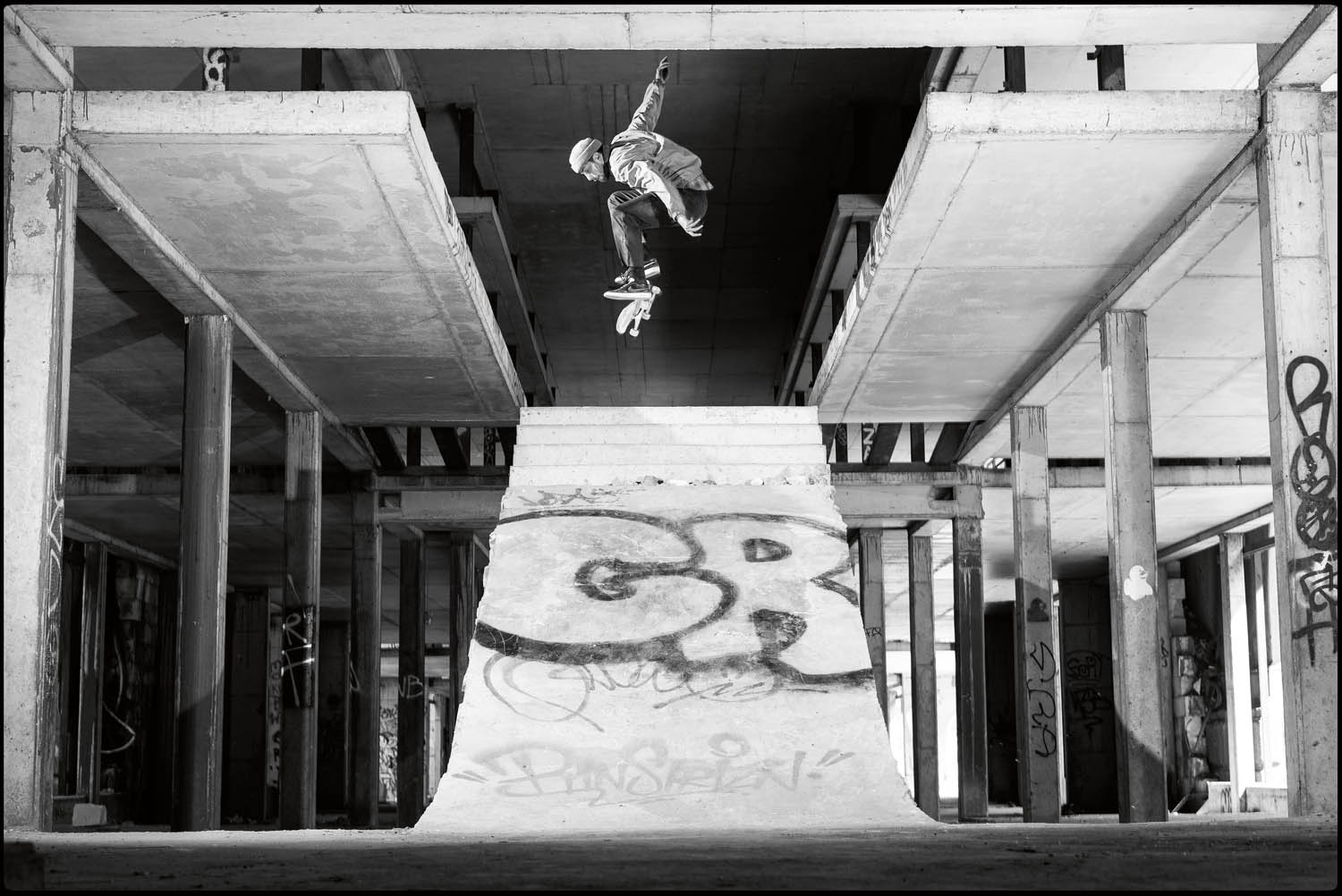 Still, despite my lack of exploration beyond the skateboard sphere, I still have some nice memories from the trip. Our days would usually consist of going for a swim and consuming at least four eggs and drinking too much coffee at the free breakfasts the hotel provided. We would then head out to rendezvous with Kuba, Michal and who ever was keen for a session. Kuba was nice enough to drive us around and Michal would follow on his vintage Honda motorbike. Marcel spent a lot of his time sat in the back of the car making fun of me, either calling me ™Jacket boy∫ because of my great selection of jackets or ironically a ‘hipster’, despite him being the one with a massive beard who would probably pay £5 for a bowl of cereal. Skating would always be followed by dinner and Marcel and Kuba’s vegetarianism influenced us to become veggies during our trip. So because of this we were constantly eating at vegetarian places, one of the most popular being a great Israeli vegetarian restaurant called Tel Aviv Cafe. 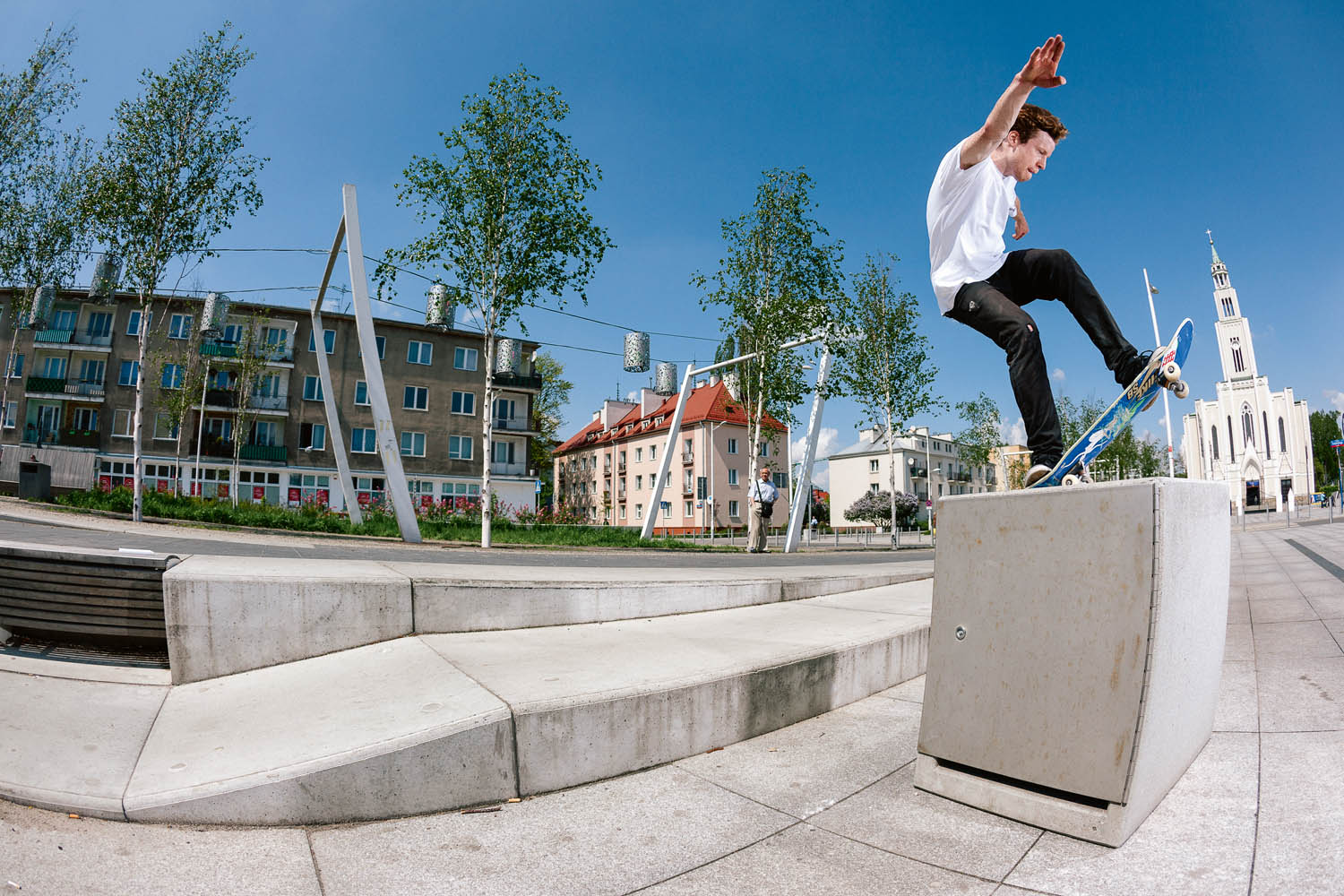 Michal Juras flies out of the bump to frontside bluntslide.

Warsaw definitely falls under one of my favourite places I’ve visited in Europe. My fondness stems from the capital’s raw aesthetic compared to lot of other places that are popular skateboard destinations. This is usually something that translates amazingly well on footage, as displayed perfectly in Kuba’s video Grey Area. I can definitely say that I plan on going back to Warsaw and that I was sad to leave there – what made it even sadder for me and Casper was the fact that we had to go back to a Tory run Britain as the general election was held during the five days in which we were away. WAH! 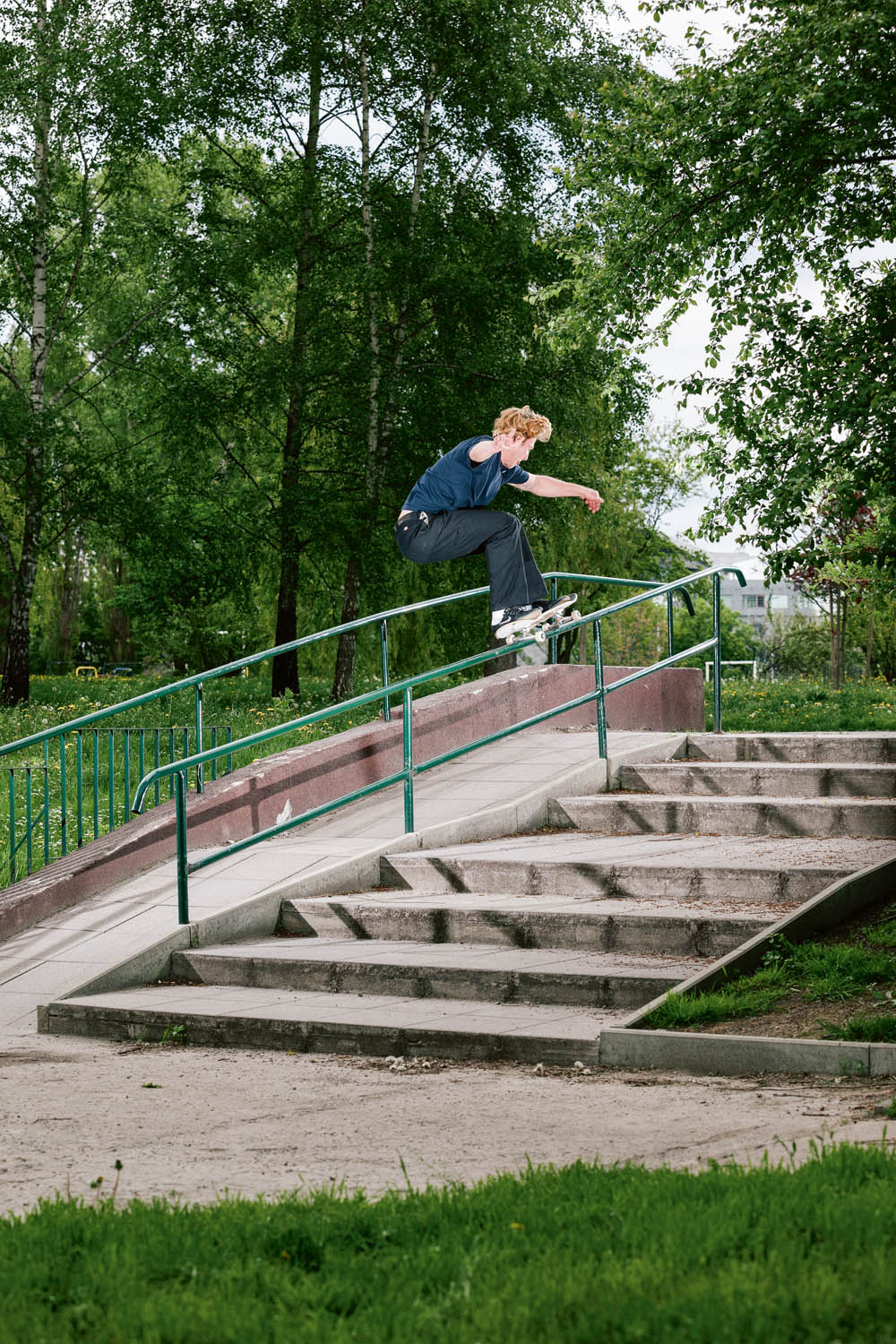 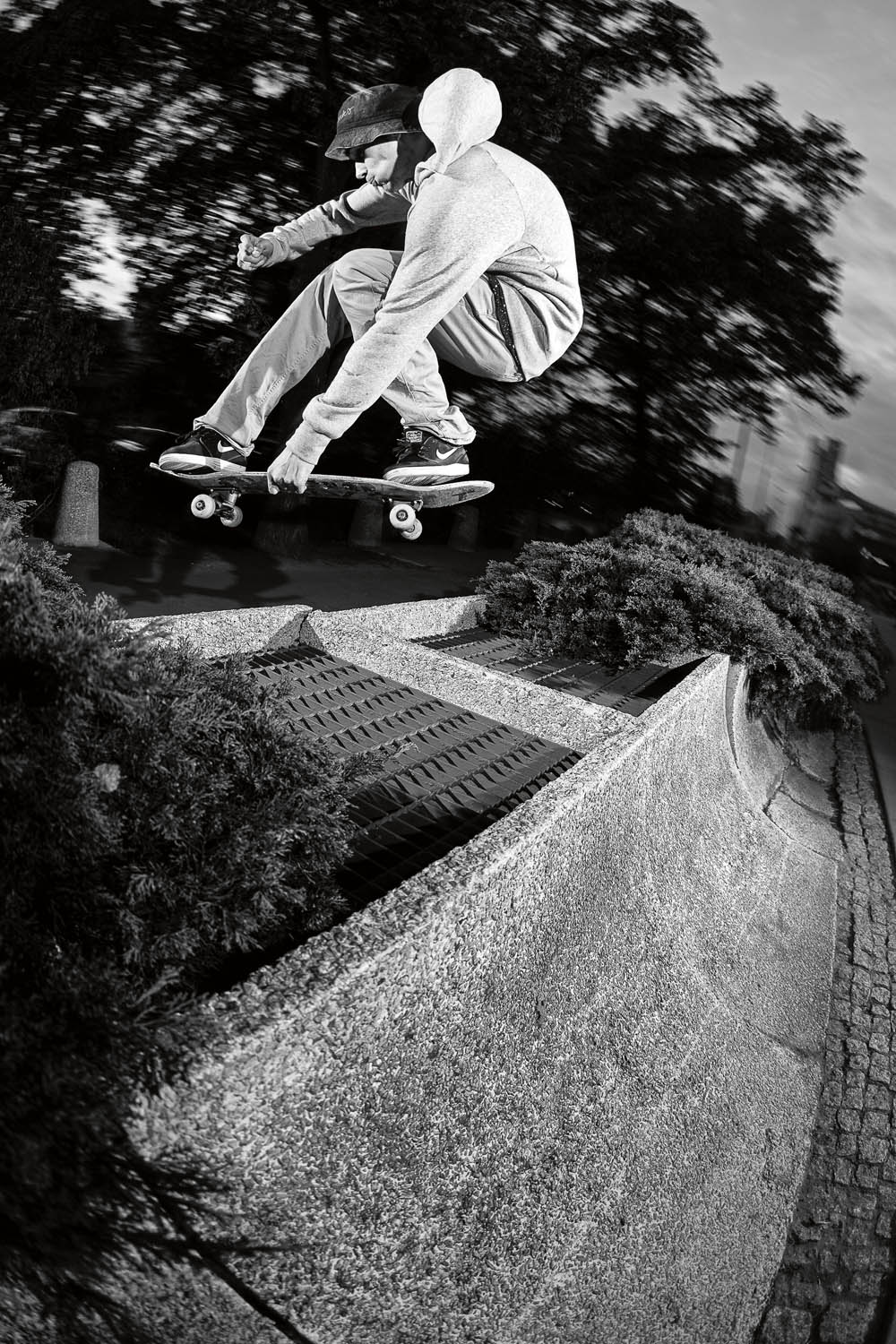