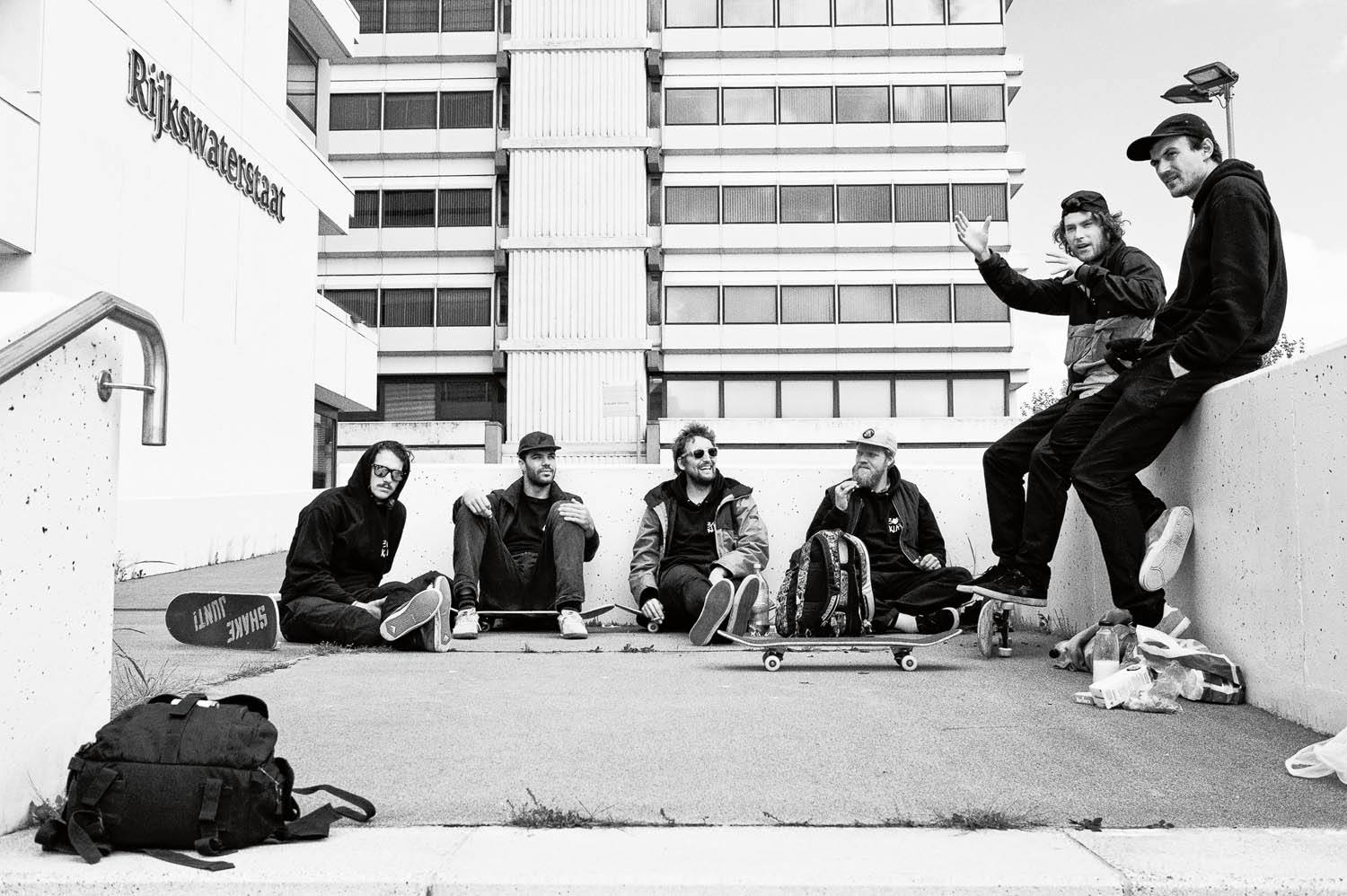 Unless you’ve been living under a rock the past few years you’ve surely heard of the Bombaklats crew. Well if you somehow don’t know, the Bombaklats are a tight-knit crew of skaters from Holland who are wrecking shop in Western Europe. Now this is not the definitive Bombaklats article, not all the crew is represented in these photos, it’s just a small sampling of what our friend Davy Van Laere shot when he accompanied the guys on a short trip up through northern Holland. Bram De Cleen talked to the Bomba’s filmers Sami El Hassani (aka Sami) and Jan Maarten Sneep (aka Sneep) to get a little more info about the crew and what they’ve been up to.

Bram: Who started Bombaklats? When?

Sami: When I was about 16 years old, I was already filming my homies that I skated with back then, together with one of my friends who filmed as well. It was just with a handycam and after a while, when I had figured out that I really enjoyed filming, I considered buying a VX 1000, which obviously is the best skate camera of all time. My friend that was filming as well wanted a VX1 just like me. So in the summertime I got a job at the same company where my mother worked and saved up 1000 euros in about seven weeks. At that time I found an offer for two VX1000’s on the web, which was perfect for my friend and I. I told him that I found a good deal and he was down for one of them. He didn’t have enough money so my mom let him borrow the rest for his share. We were hyped but after he paid back the money to my mom he told me that he wanted to make a video by himself without me. I felt betrayed and that’s where the friendship ended. Now I was on my own and started filming a lot with my other homies. As I improved my filming skills, I got in touch with the better and sponsored skaters like Sebastiaan Vijverberg, Nassim Guammaz and Tim Zom. My friends where skating less and started to do graffiti, they lost interest for filming video parts. So, I planned to make a video with Tim Zom, Nassim Guammaz, Sebastiaan Vijverberg, Rob Maatman, Robbin Oost and a few others. In that period Sneep had just moved in to town. He had already made a skate video with his crew and was working on a new project. So we were both working on our own projects. 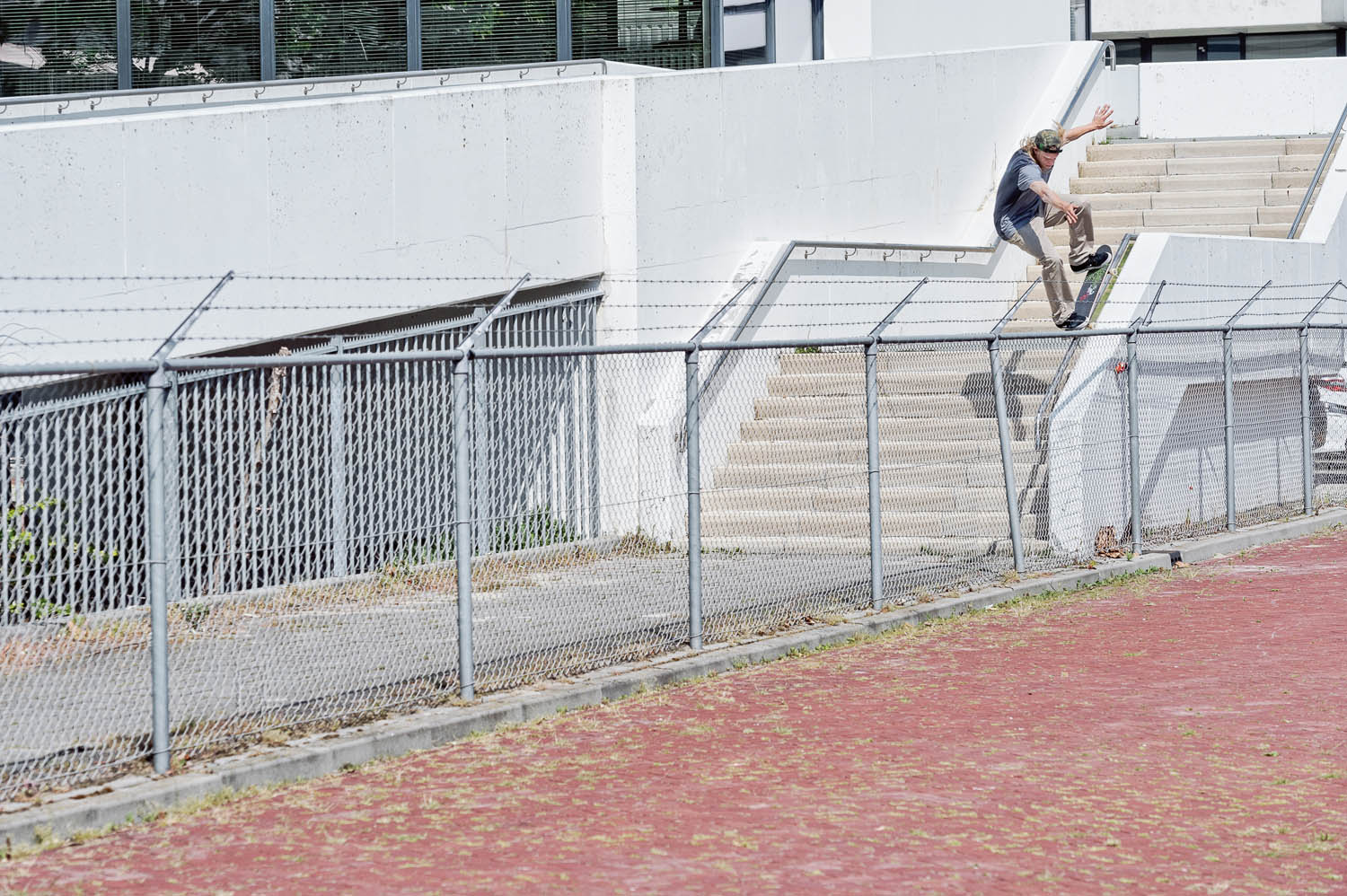 Sneep: I remember when Sami first got his VX, I felt like I had to keep up with those kids. We gradually started skating and filming more together and our crews fused into what became Bombaklats.
Sami: Sebastiaan Vijverberg actually came up with the idea to do one video with all of us together. 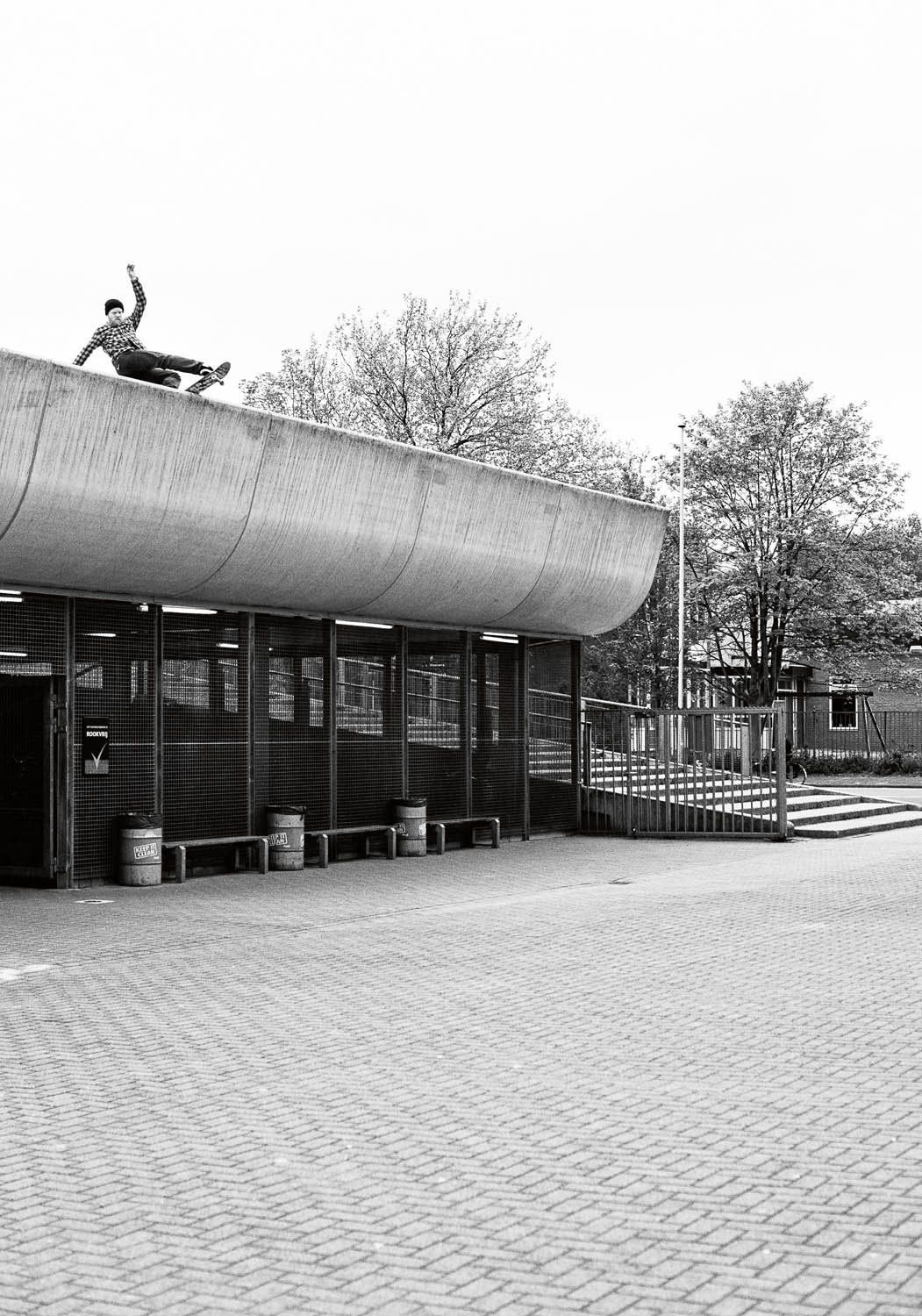 What does the name mean? Who came up with it?

Sami: Alexander Belhadji started saying “Bombaklats!” a lot when he was hyped on a trick or something. The whole crew kind of picked it up and as we didn’t have a name for the video we just called it that.

Who does the filming and editing? 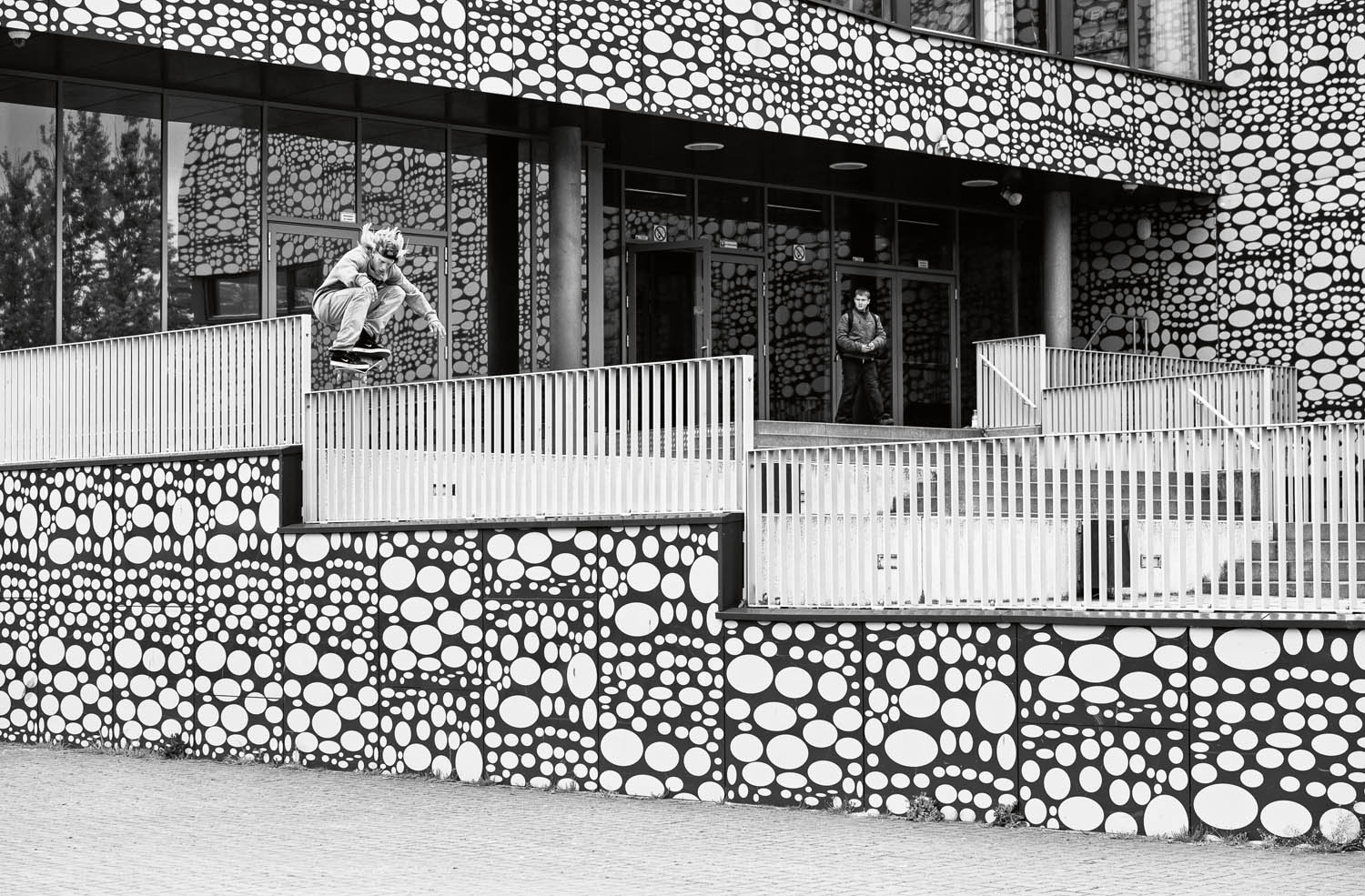 I really liked the graphics, are they a joint effort as well?

Sneep: Creating those animations was more my cup of tea, but we’d still do lots of those together. We used to set up animation nights, where we’d write “bombaklats” over and over with big markers. That’s also where our logo came from, it was just one of those writings.
Sami: At the time Sneep was working on his graduating piece for the Art Academy, and was really into Rotoscope, an animation style. He was really good at it and came up with the idea to use it in the video. I was hyped on that idea and I think it worked really well! He made almost all of them, except for one I did, which ended up first in the video, haha.

You both feel that the animations and graphics work better with SD footage but you’re filming in HD now, does that mean you’re going to stop doing them?

Sami: We’re going to figure out something new that gives it that raw look, but also works with the HD format. This month we’re going to experiment a lot. So no, we’re not going to stop but we still have to start. 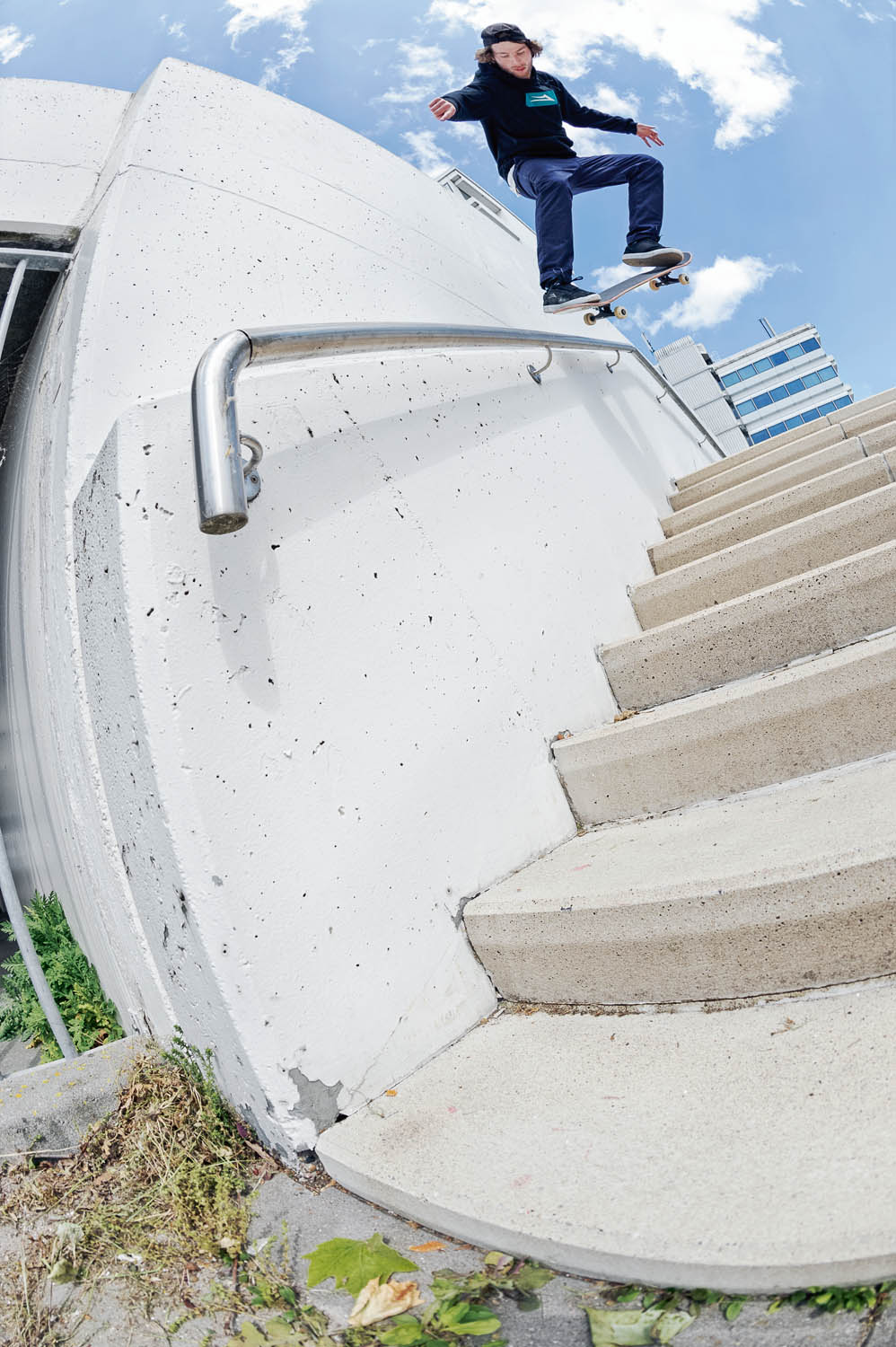 How did the first Bombaklats video end up on the Berrics?

Sneep: We did a premiere in Rotterdam, and an online release a little later. After everything was up on YouTube, I started sending e-mails to all websites that could be interested in posting it. Not much happened, but after about a month I got a reply from the Berrics. They were hyped, I guess! We took it down from YouTube for a while so they could exclusively push it worldwide, one part a day!

When can we expect the next project?

Sneep: We’re working on it. We’ve filmed for about two years now. No date yet though, but the guys did well.

Sami: We’re going to start with the edit now, which is a long process, as many people know. I hope we can still drop it this year.

Who will be the main guys featured?

Sami: Nassim Guammaz, Sebastiaan Vijverberg, Tim Zom, Robbin de Wit, Remco Stolze, Rob Maatman, Daan van der Linden and a lot of others! Actually, the crew that was in the previous movie and some underdogs that nobody knows.
Sneep: We’re also involved in Shajen Willems’ new video part, together with Zev van Sluysdam and Geoffrey van Hove who filmed some clips as well. It’s going to be insane!! 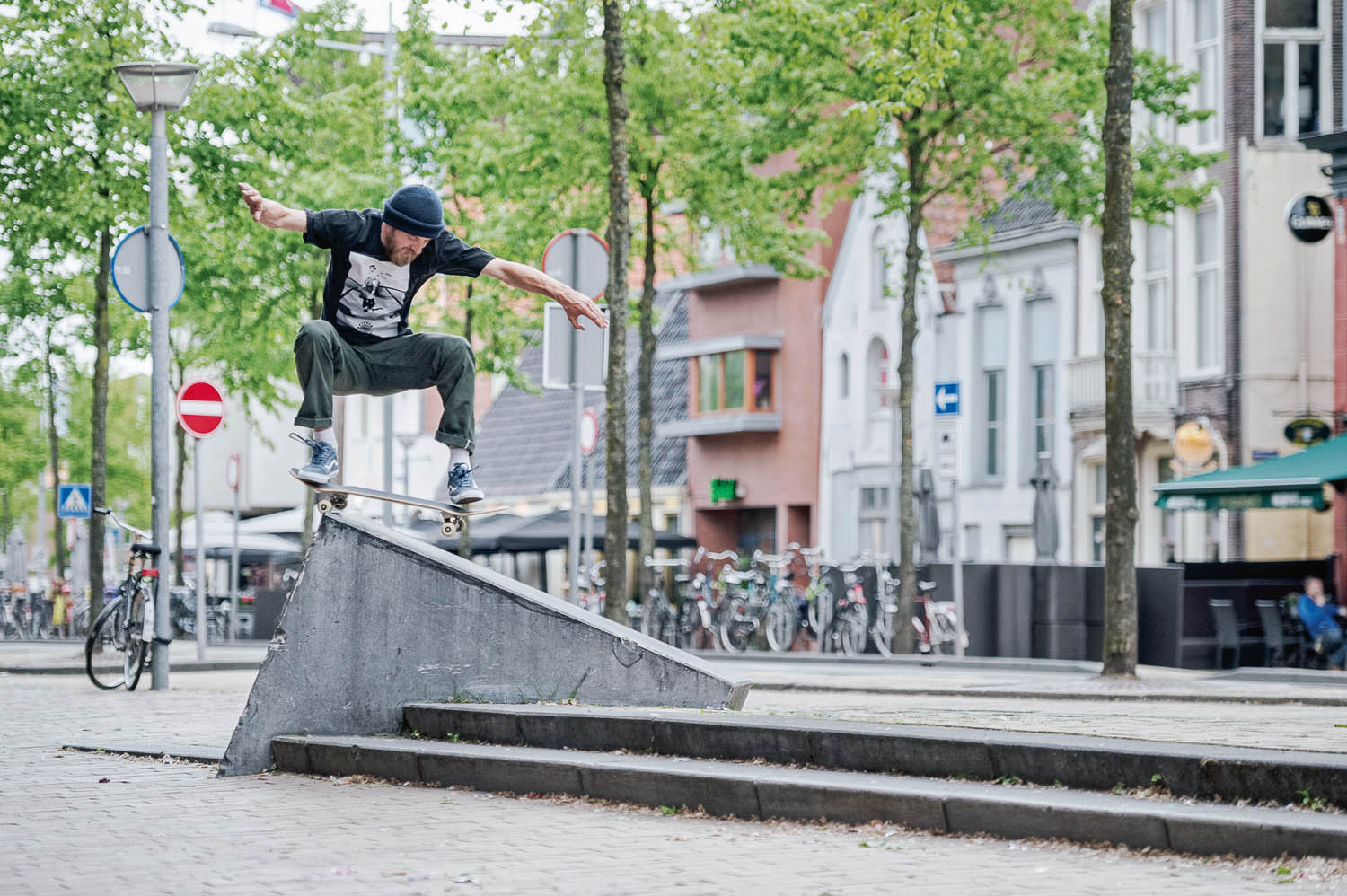 Sebastiaan Vijverberg, wallie to 50-50 in Groningen.

Sneep, you’re doing the Sneep Memory Screen features on the website as well, what’s the inspiration behind that?

Sneep: Memory Screen is my skate nerd project. For about two years I’ve been re-watching every older video I could get my hands on. I wrote down all the tricks that really stood out for me, back when I watched it then, and when I watched them again, now. My original plan was to turn these notes into short Instagram clips. Two years later there were already a handful of people doing this nostalgic skateboarding theme (@koolmoeleo – my fav). Now I’m basically editing all my favourite footage from my favourite skaters to some music that in some way relates to the skater. The list is long, but here’s a glimpse: Mike Carroll, Josh Kalis, Tim O’ Connor, Karl Watson, Rob Welsh, Brian Wenning, Danny Renaud, AVE, and many more to come. 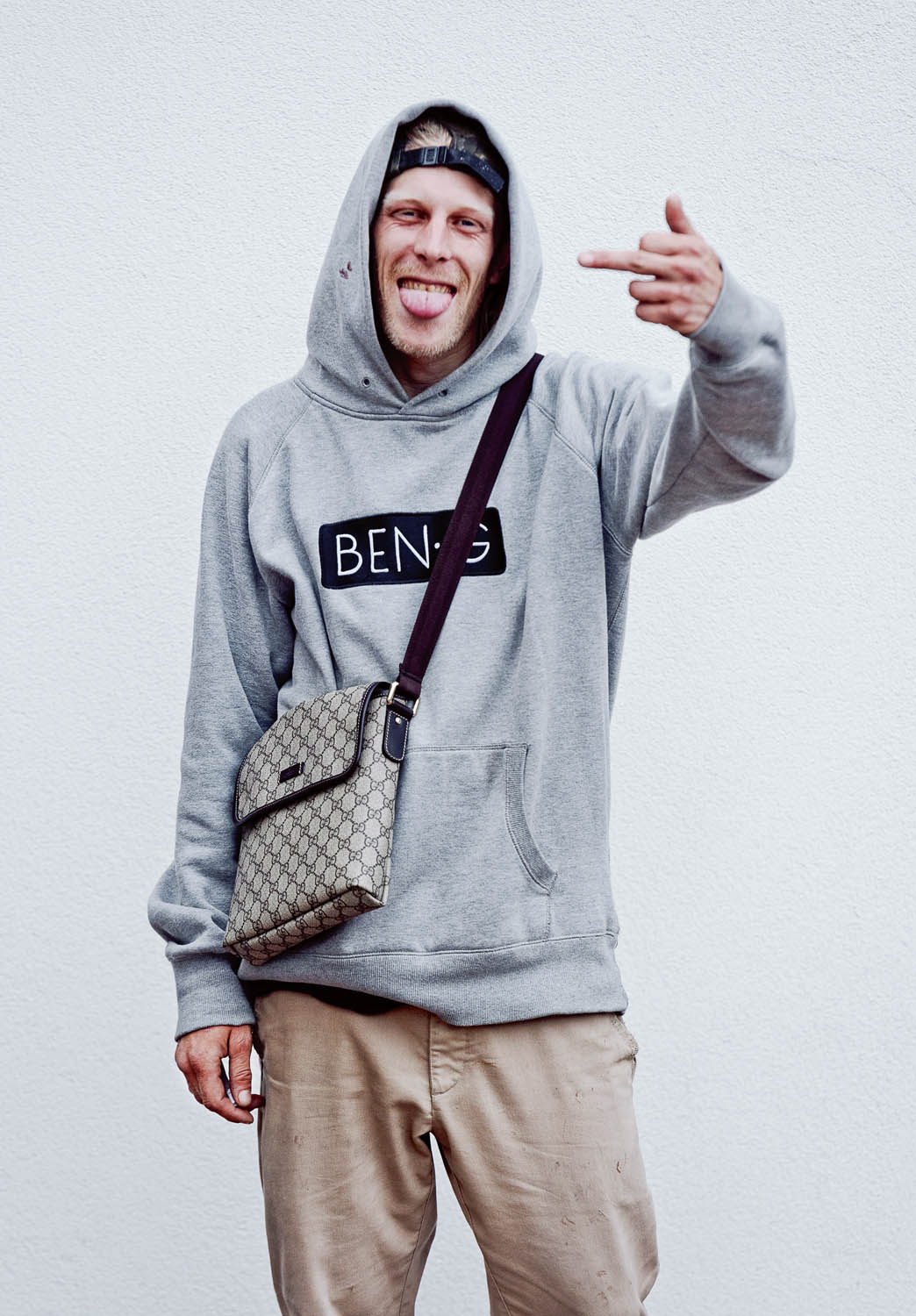 I look forward to seeing all of them! So you guys are involved in the POP Trading Company clips as well, right? You guys seem pretty busy behind the camera and computer and are doing a really good job. Are you starting to make a living out of filming and editing?

Sami: Yeah true, when I first heard of POP and what they were doing I thought it would be just a regular distribution. When I heard that they were doing Palace I told Peter Kolks that he should hook up Alexander Belhadji, because I thought he would fit the brand perfect. Then Ali told me there was a meeting with them and I just went there with him! I met all the boys, well a lot of them I already knew, Peter and Ric (The Main guys behind POP) showed their plans for the team, which I thought were pretty dope! And we took it from there… They started organising team days and they asked me to film it since I new about their plans so then I started to film more with them. And now it feels like a second crew.

I can say that I do what I really want to do without doing other shitty jobs. I feel very fortunate for this and I’m really thankful to all the people that pushed and supported me over the years.

Sneep: Yeah every once in a while Peter Kolks asks us to come film for the POP clips or another project with his riders. It’s been really fun filming with people you don’t really know so well, because they’re able to surprise you. I’ve also been on a couple of Vans Benelux trips, mostly to film with Daan van der Linden. We started filming him to get his name out there, but I guess now he’s already done that for himself. But we still have the footage, so now he’s having a part in our video. So sick! If Daan isn’t your favourite skater right now, better look him up! I feel really lucky to be able to do what I love most.