Yann-Xavier Horowitz isn’t exactly a household name – but not many, if any, skateboarders from South Africa are internationally famous. If there was a South African skater to come along and change that then my bet is on Yann. Yann has been making quite a name for himself through his travels on his useless wooden toy so we caught up with him in late September whilst on a trip to Lyon. Mr Horowitz kindly filled us in on the South African skate scene, various travel tales and his near-death experience.

Yann, so what brings you to Lyon?
Well Familia got a hold of me and told me they were going to do another trip and that they were going to try and finish up their video by the end of the year. So I just saved up all my money and bought a ticket here. It’s just to chill with good friends, film as much as possible and drink cold beer. I’m really enjoying it at the moment… Lyon is amazing!

How did you hook up with Familia in the first place?
I was skating for this company called KFD in South Africa (SA). They’ve been around in SA for a while, but I wasn’t really happy with where they were taking me and what they were doing. So I moved to London in 2010 and it was the first time I met all the Familia guys properly and I just kind of asked them… I was like: ‘Hey you guys, any space? If I get a sponsorship tape ready would you consider putting me on?’ And I guess I just got along with the dudes really well and slowly but surely they started sending me boards.

And can you tell us a little about the Familia brand?
So Familia started in Johannesburg, South Africa awhile back. I can’t say the exact year because it was quite before my time… I was still in like a helmet then. (Laughs) So Gavin Morgan and Adrian Day from SA started it and then Gavin ended up moving to London so it kind of branched out from there. The brand is mainly in SA and the UK. 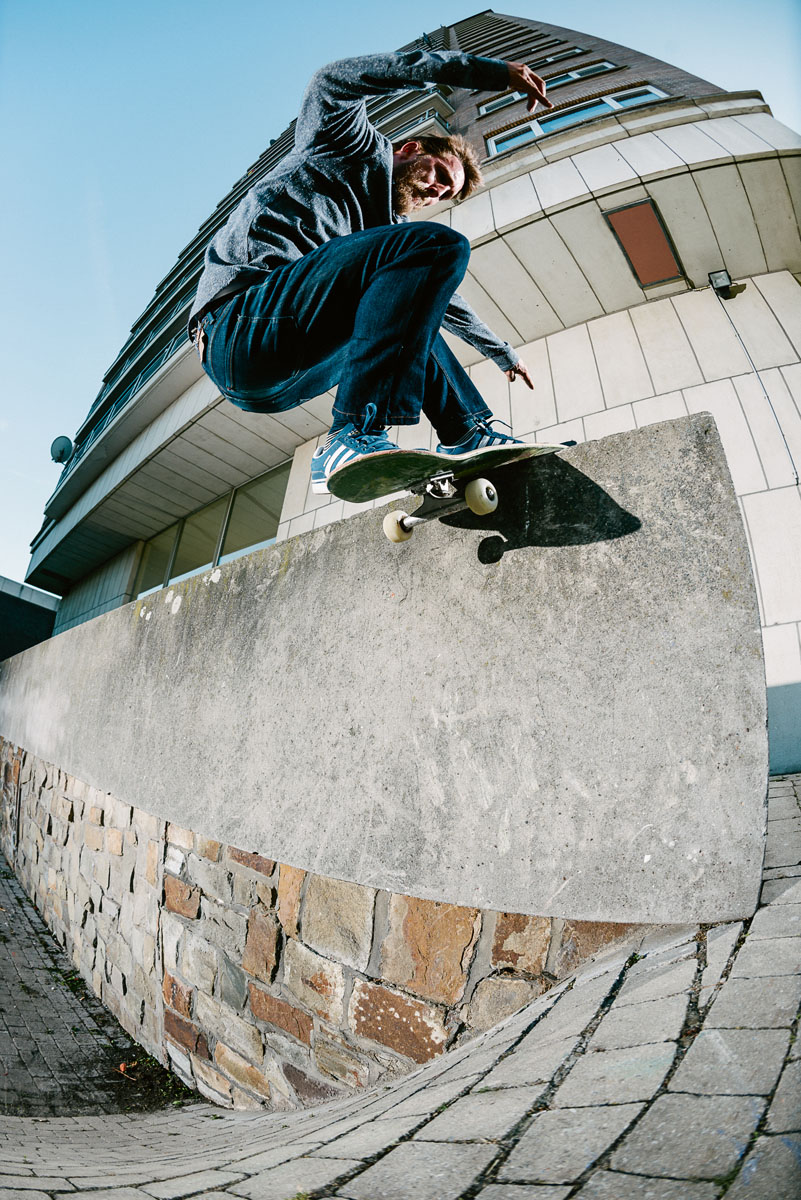 Can you tell us about growing up – how were your first introduced to skateboarding in South Africa?
So I grew up in this sleepy little beach town just outside of Durban. It had one street, one shop, one bar and everyone surfed in my town. And I was the only kid that had a skateboard and I didn’t really tell anyone this at the time, but I had this big fear of the ocean. I couldn’t really get out in the water because if my feet can’t touch the floor I’d freak out. So I just decided to be a land dweller and work on skateboarding. So all my friends just carried on surfing and I was the one that branched out and made friends with the guys more inland in the city. My mum would drive me every weekend to the city. I kind of lead two lives: weekdays were the beach and school and then the weekends were the dirty city and skateboarding. It worked out really well: street smarts and laid back.

So I know you live in Cape Town now, what’s the skate scene like there and in SA in general?
So the skate scene in Cape Town has grown recently. Funnily enough Cape Town is the worst city for skateboarding spots-wise compared to Joburg and Durban. But Cape Town is kind of like the younger city, the party city, so half of the scene has moved there, which kind of makes it tighter. Half the scene is in Cape Town and it forces us to get creative and keep searching for new stuff to skate. And Johannesburg has a really big scene and it’s tight too, everyone knows each other. But in South Africa the whole scene is like one big family – it’s cool. 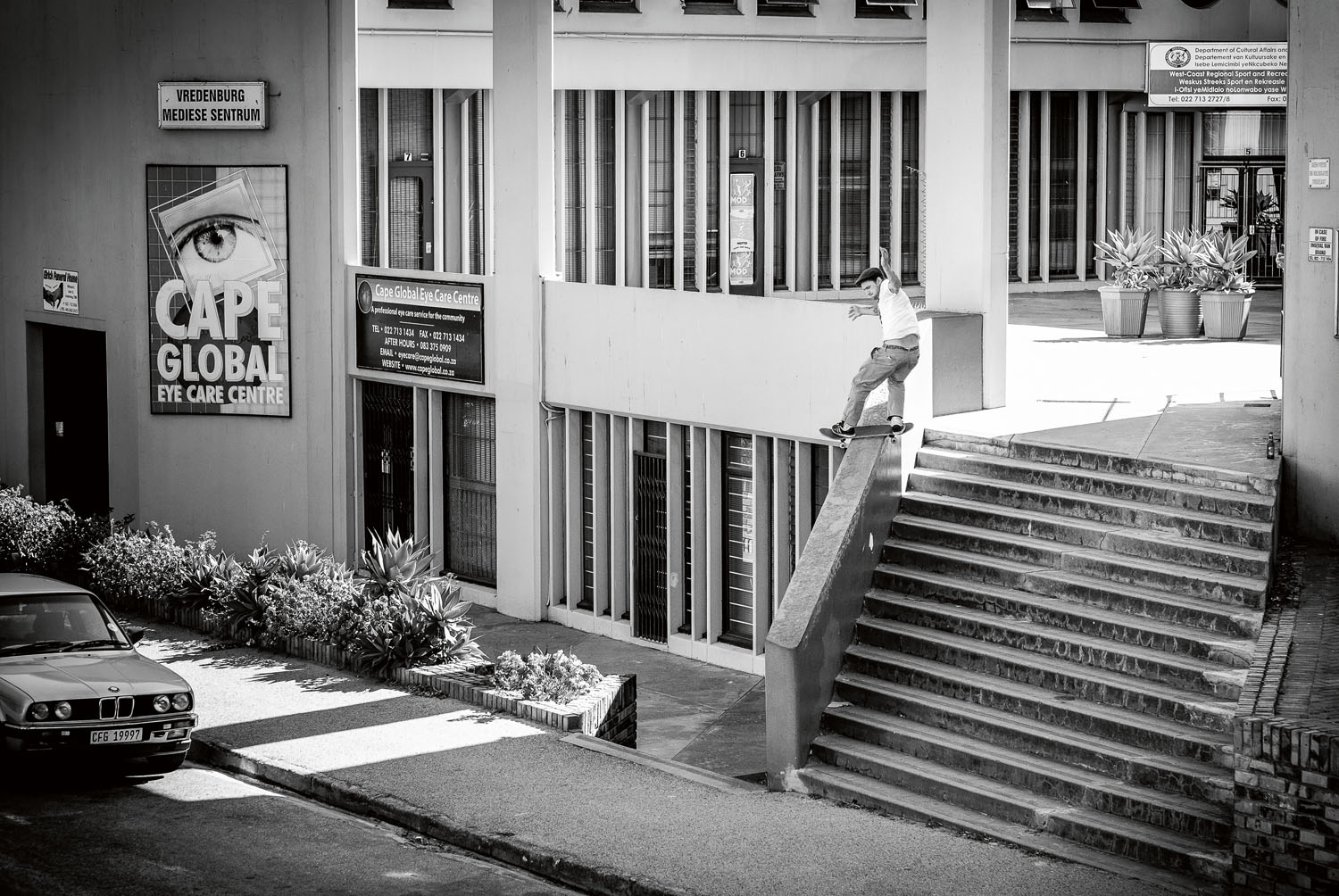 I know a few years ago you spent a year in London, and last year you were in Berlin and Barcelona for a bit after the RVCA Sideways tour. Have you thought of moving to Europe full stop?
I’m a bit of a poltergeist. I pop up every now and again and then I just disappear. I kinda like it though. But I think if the opportunity arose then I would move to Europe for good. It’s hard to find a good enough job to pay the bills and have as much time for skating as I want in Europe. I found that in London I was working way more than I was skateboarding because everything was so much more expensive over there. In SA the price of living is a bit different – I don’t have to work my ass off every week just to pay the bills. Life’s just a little easier there. I think Europe’s on the cards as long as I don’t have to work some shitty bar job.

Ok so I know you were in an Adidas clip in Namibia… Have you travelled all around Africa with skateboarding?
Namibia was actually the first country out of South Africa I visited to skateboard. It was one of my favourite trips I’ve ever been on. That country makes no sense; it’s just a whole lot of nothing, but it’s beautiful. It feels like you’re on a different planet. From up north it feels like you’re on the moon and as you go south the sand goes red and it’s like a Mars-scape. The only other African country I’ve been to is Kenya, as my parents lived there for a bit. I haven’t had the opportunity to check out more places – I know Mozambique is crazy with spots… Quite a few South African skate tours have been to Mozambique, but I haven’t jumped on one yet. 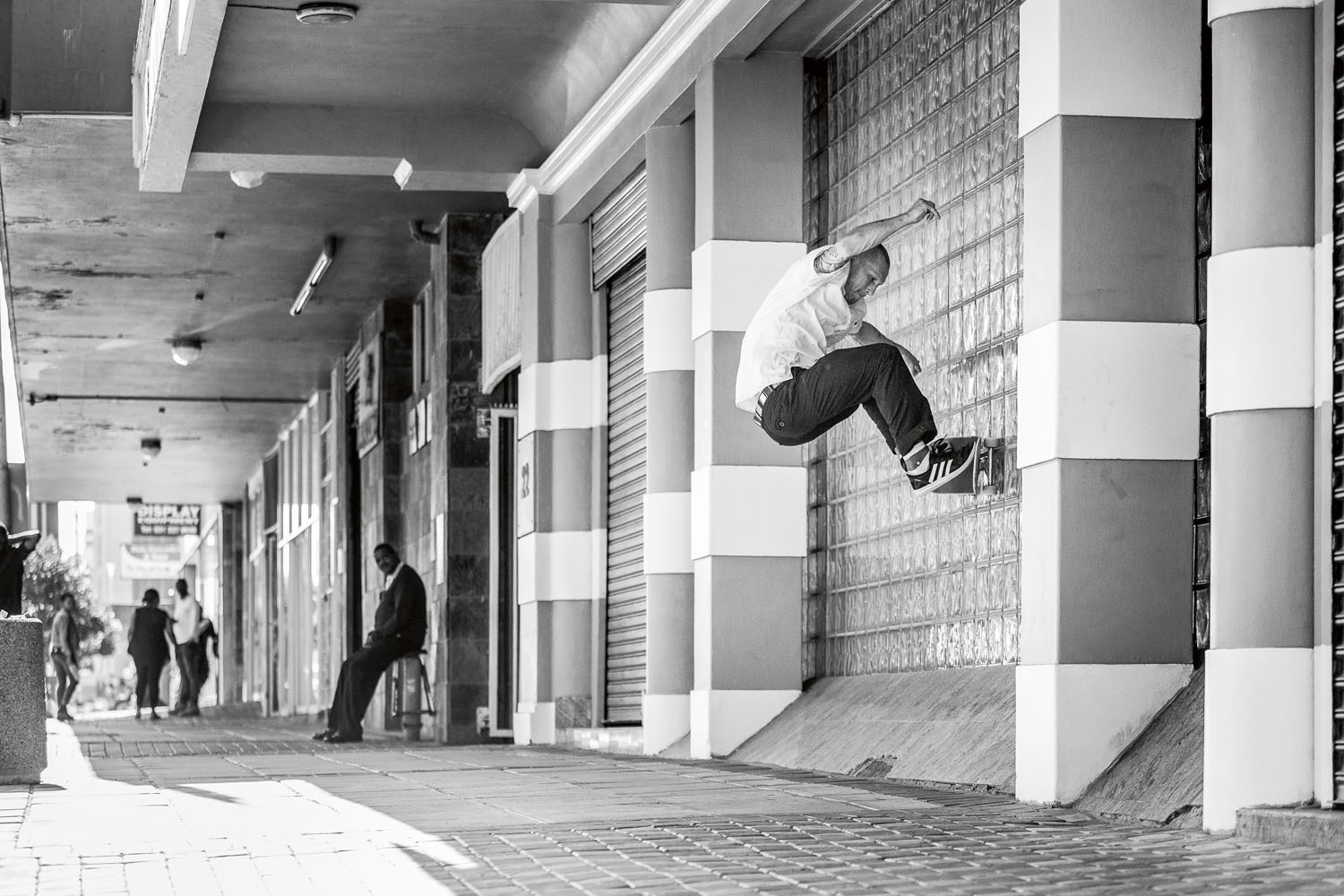 Most all of my South African friends living in London have a wild tale about South Africa where they either got robbed, almost killed, in a gnarly, fight, etc. Do you have a crazy SA story like this?
I can tell you one that happened literally two and a half months ago. So I was walking home with my boyfriend and these two dudes kinda came up from behind us, we were walking through an area we knew we shouldn’t have been walking through, but we were drunk and confident… So suddenly there was one dude on my side and one dude on his side.
And then in about 30 seconds they had split us up and the one dude had a giant, silver steak knife at my throat. He was screaming: ‘Give me all your shit!” And the other dude had my boyfriend pinned down, but he had no weapon so my boyfriend starts beating the shit out of this dude. So by this time my mugger is realising that his mate is losing the battle and my dude is just laying into him. So my mugger keeps looking at me like ‘are you gonna try something or do you wanna die?’ So I’m trying to dig all my stuff out of my pockets but I’m giving him stuff that’s kind of useless like an empty box of matches. My phone, my wallet, everything was with me, but I just keep whipping out these 2 rand coins like ‘here you go!’ and he was getting more and more pissed off, but I was just buying time because I was trying to figure out how to get out of this. It’s weird when you have a knife to your throat – you always think you are harder than you are.

Yeah…
You just think you’ll get out of it and beat the shit out of the guy, but I was just crumbling… I was pale and I just kept saying: “Just don’t kill me, just don’t kill me…” And then my boyfriend comes out of nowhere and gets him
in a headlock from behind.

Oh shit!
So as soon as the knife was away from my throat I gave the dude a little sucker punch and then I just kinda ran. I couldn’t be around that dude anymore. And then the dude got out of it and went straight for my dude’s heart and got him pretty good, like pretty deep.

Whoa, with the knife?
Yeah with the knife, he went straight for his heart and he nearly broke through. When the adrenaline’s running both of us didn’t even realise. So we ran in one direction and we were having a chat like: ‘are you okay? Are you okay?’ And then suddenly I just noticed his shirt was drenched in blood. And so the rest of the night was spent in hospital.

So he’s all right?
Yeah he’s okay. He’s a trooper though. When you live in a country like that you have to take these things in stride. It kind of happens all the time, but you can be street smart about it. It doesn’t have to happen, we were just being stupid that night. It’s just being in the wrong place at the wrong time. I’ve been in those situations in London more often than my whole life in South Africa. It’s unfortunate that we have to live through violent situations over there. But at the same time in London in one year I had to run for my life three times.

So that leads me to my next question, do you think SA is dangerous place in general?
It can be if you don’t know what you are doing. If come visit it’s good to have a connection that can show you the ropes. It’s also kind of obvious, you can tell which areas you shouldn’t be in and which ones you can. For me, I think the beauty of South Africa kind of puts the wool over all the crime and dodginess of the situation. In a way I kind of like that it’s edgy like that you know? It’s like I kind of feed off that. And you learn a lot… You learn a lot about yourself when you get into sticky situations. 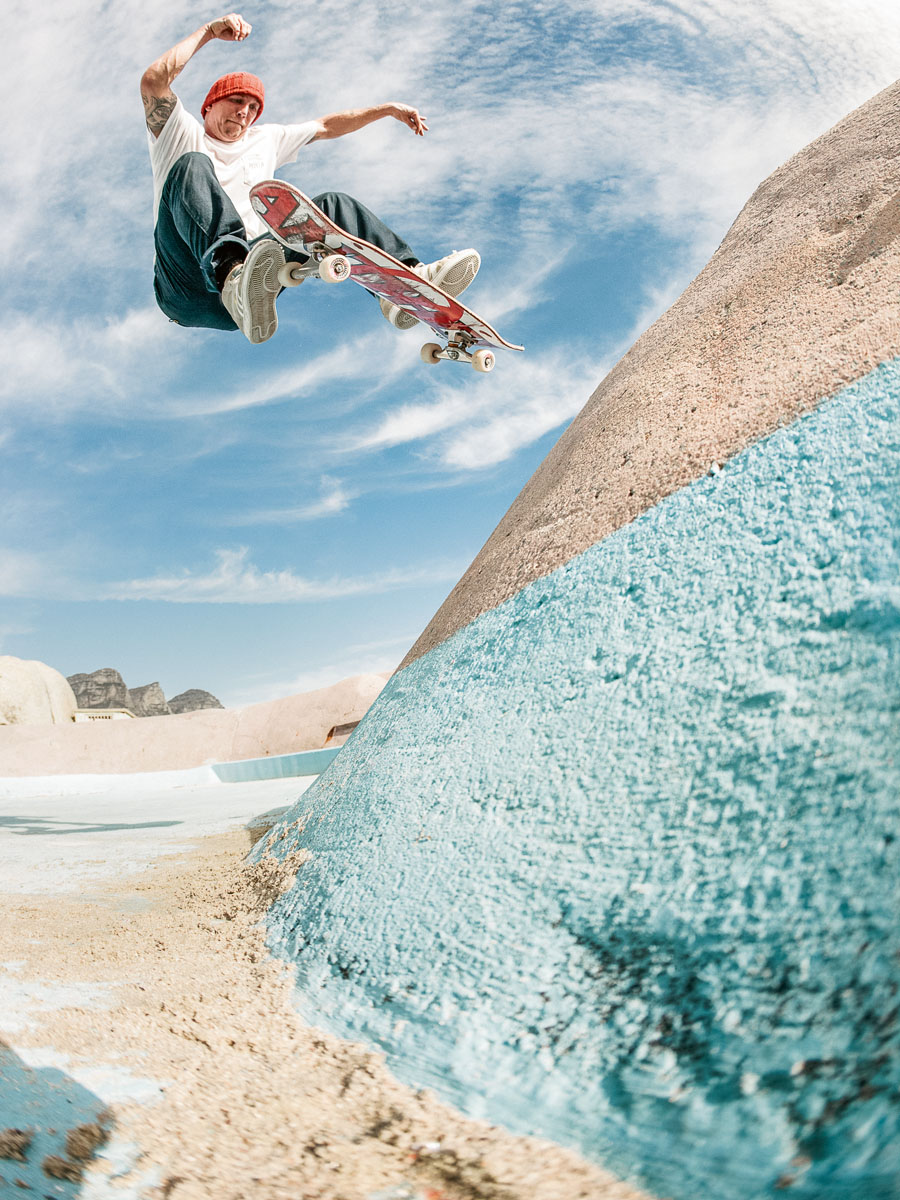 What are your immediate plans for the future?
So I just went on a RVCA trip with some of the American guys like Spanky, Julian Davidson and those dudes. And it was kind of cool as they were in my turf so I put it on myself to give them the most South African experience. I took them to proper South African dive bars, taverns in the city, I took them for bunny chows in Durban and I took them out every night as well. So all the guys on their own time invited me to stay at their places in Long Beach and Los Angeles. They are thinking about letting me jump on a tour to Australia in February so that would be great. If that happens I’d go to Australia then fly back with them to LA and spend a few months in the States. It was good making those connections on the trip because that’s exactly what I needed.

So sometimes do you feel a bit isolated living in South Africa and being a skateboarder?
Oh yeah. We are far away from everything. To travel to Europe or the States you can’t just go online one weekend, and book your tickets… It takes about six months of planning and six months of saving. It’s not easy. But through connections it becomes easier.

New connections, new places… I know we’ll be seeing more and more of you. Best of luck Yann! 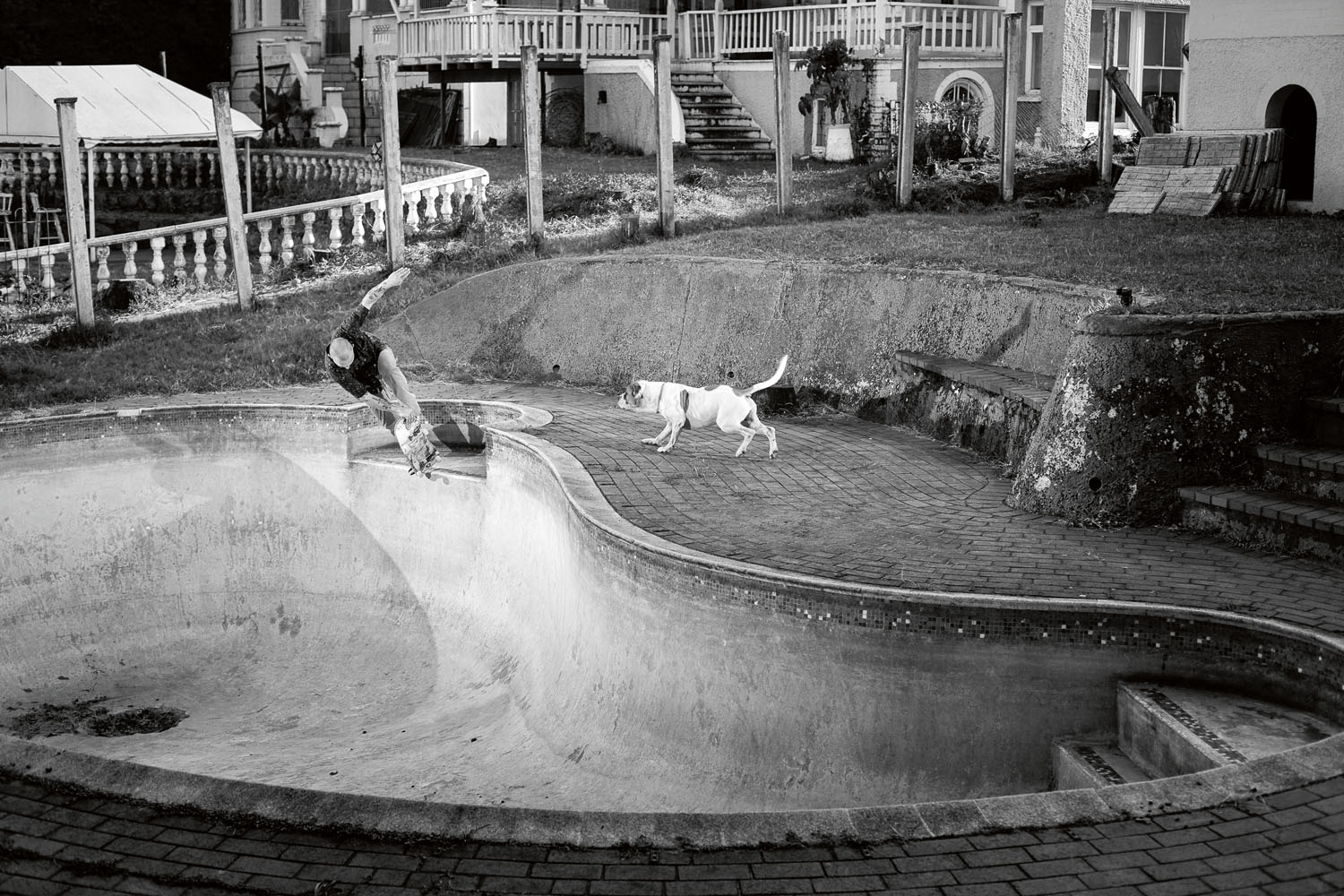