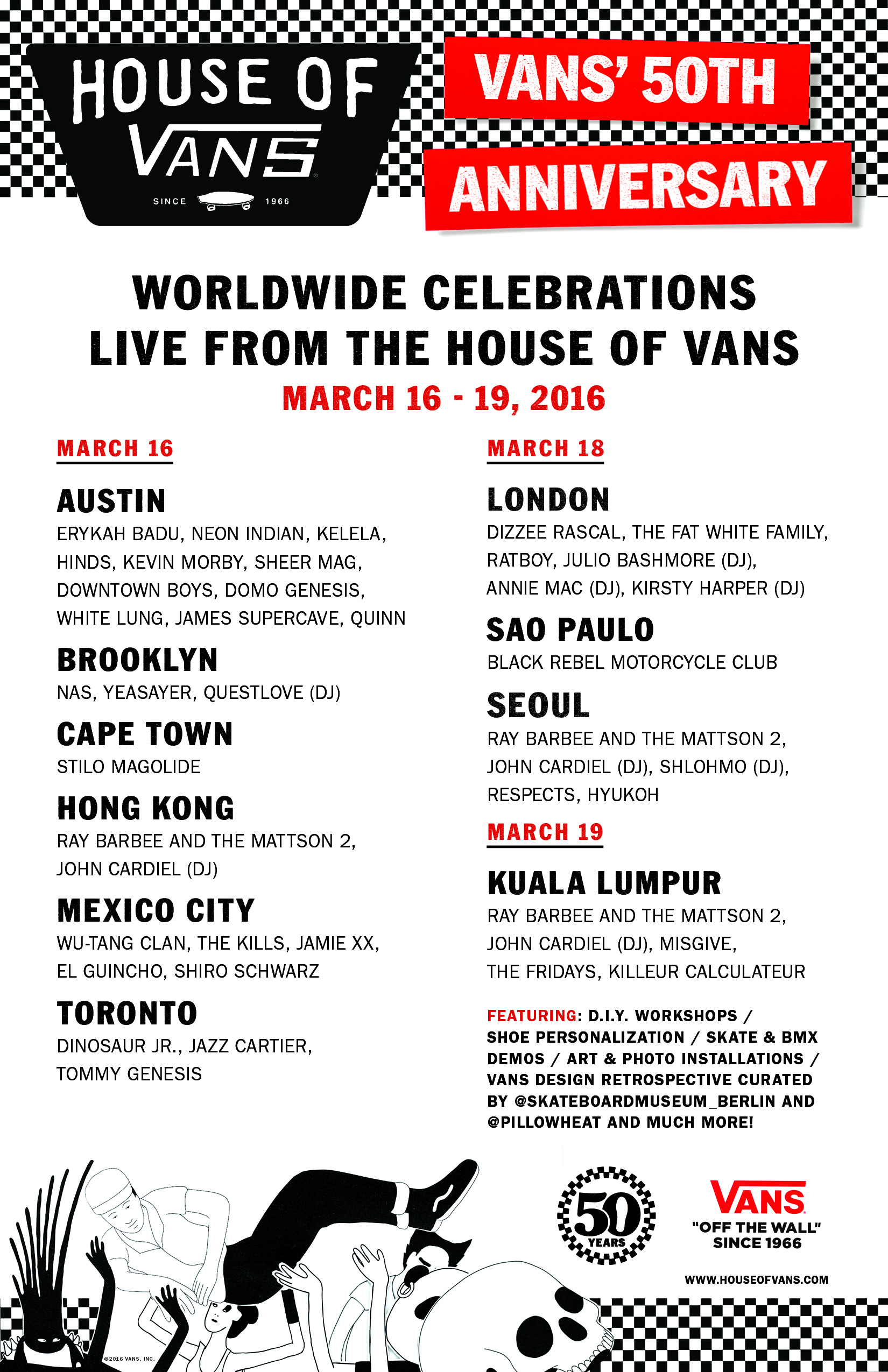 On March 16, 2016, Vans brings together 50 years of “Off The Wall” heritage in action sports, art, music and street culture for a worldwide celebration of creative expression at the House of Vans. Vans’ legacy will be brought to life in ten cities across the globe to celebrate its 50th anniversary alongside the extended Vans family that have made the brand what it is today. From New York to London to Hong Kong, Vans is thrilled to welcome a mix of eclectic performers including Nas, Dinosaur Jr., Wu-Tang Clan, The Kills, Erykah Badu, Jamie xx, Dizzee Rascal, Yeasayer, Shlohmo and more, within an immersive brand environment specially created for Vans’ anniversary year. Additionally, guests at every location will be welcomed to participate in a range of workshops for a hands-on experience that is truly Vans.

The highly anticipated House of Vans experience showcases Vans’ unique culture through multifaceted activations including D.I.Y workshops, shoe personalization, a retrospective look at the brand’s history, curated musical performances, and an interactive, 3-D display of Vans’ 2016 brand campaign, which is set to release March 16. Upon entering the House of Vans, patrons will take a walk through Vans history for an intimate look at memorabilia installations highlighting 50 years of iconic moments. To honor and tell the story of Vans’ design progression, Vans has partnered with esteemed collectors @Skateboardmuseum Berlinand @PillowHeat fromThe Other Side of the Pillowto present a gallery of vintage Vans products. Attending guests will revel in the sounds of a genre-diverse selection of musical talent including punk rock, hip-hop, indie and electronic, all which represent Vans’ unique music aesthetic.

The most exciting component of the House of Vans 50th anniversary events comes from the engaging experience that will bring to life Vans’ 2016 brand campaign. Not yet released, the 2016 Vans brand campaign puts a spotlight on Vans’ 50 years of enabling creative expression through the brand’s cultural pillars. For a sneak peak at the campaign visit YouTube.com/vans.

The March 16 kick off events are the beginning of the global expansion of House of Vans, which further cements Vans’ dedication to fostering creative expression through action sports, art, music and street culture. Throughout 2016, Vans will host a variety of activations including skateboarding demos, music events, interactive design workshops and art installations, all to continue to encourage the creative communities that have supported Vans for the past 50 years. As the cultural hub for Vans, House of Vans seeks to inspire and connect with everyone who enters the space. With two permanent locations, one in New York and the second in London, Vans’ golden anniversary year will introduce pop-up House of Vans experiences to more locations around the globe creating a space where Vans enthusiasts around the world can interact with the brand one-on-one.

To look back at the evolution of the Vans brand, visit vans.com/since66 for a timeline of iconic moments from Vans’ history.

Whether you’re attending the House of Vans or watching from afar, join the conversation using #Since66 and #houseofvans on Twitter and Instagram, check out live coverage on Snapchat, and visit the Vans Tumblr for updates on Vans’ 50th celebration.