Looking back with Eric Koston 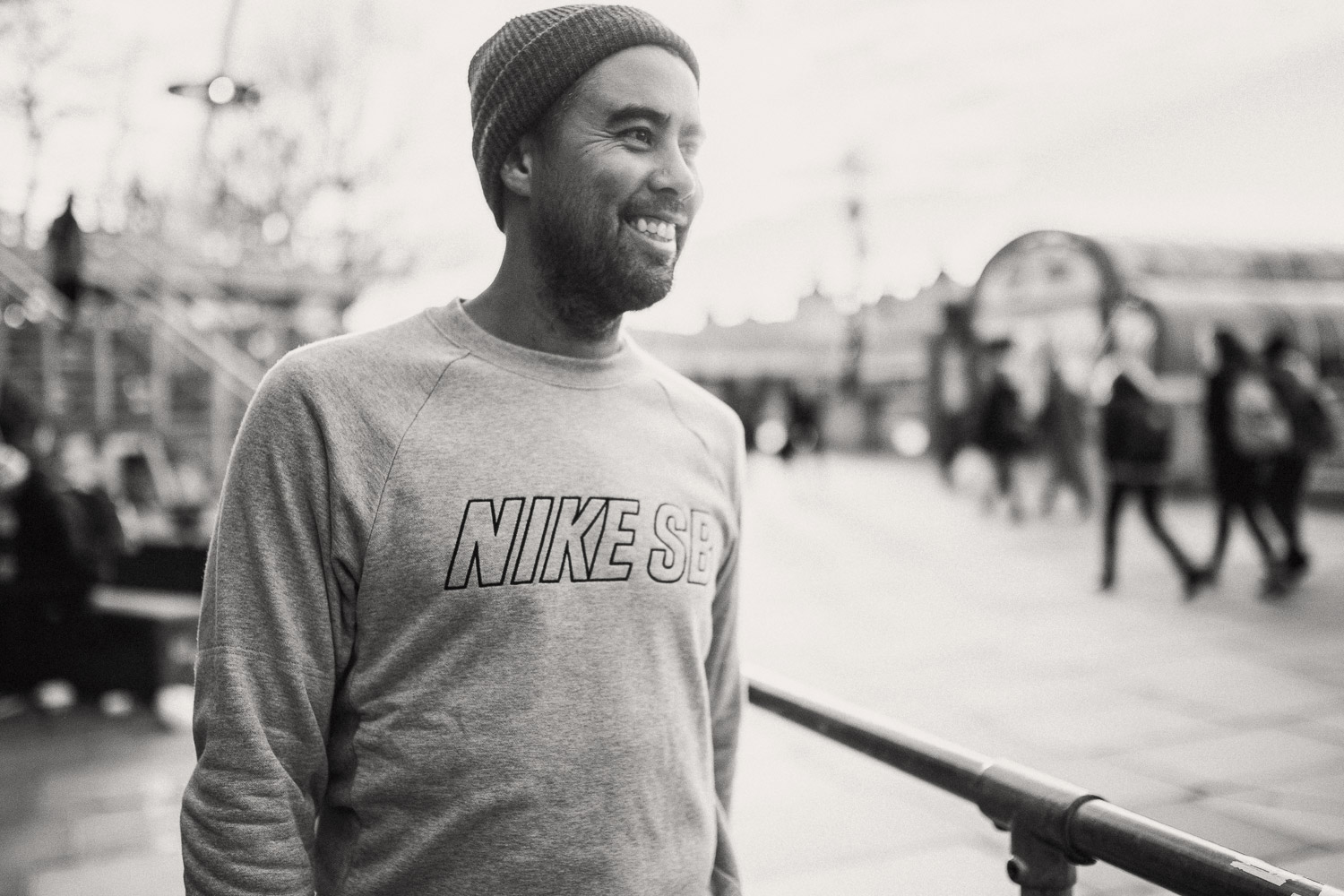 It’s not often we get to interview  someone that’s been skating in four different decades and is still in the limelight… Eric Koston is one of the few. After starting skateboarding in the late-eighties, Koston is still shredding his useless wooden toy today in 2016. With so much coverage over the years we thought we’d take a look back with Eric at some images ranging throughout his career. 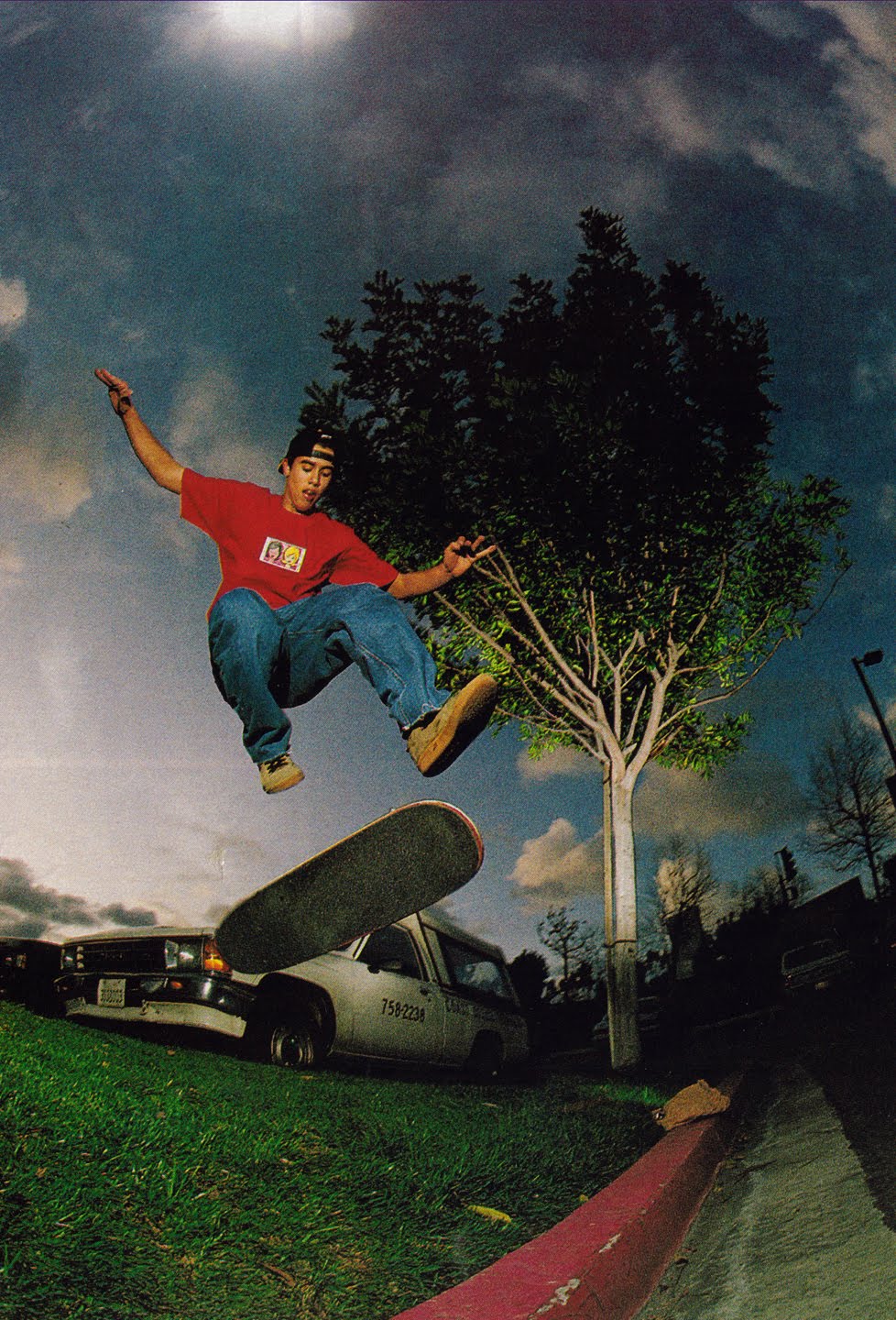 Eric Koston: “That was big gap at one point right? It was a justifiable sized gap to do a switch tre flip over. It’s about a three or four foot patch of grass. I think this was ’92 and Steve Sherman shot that photo.” 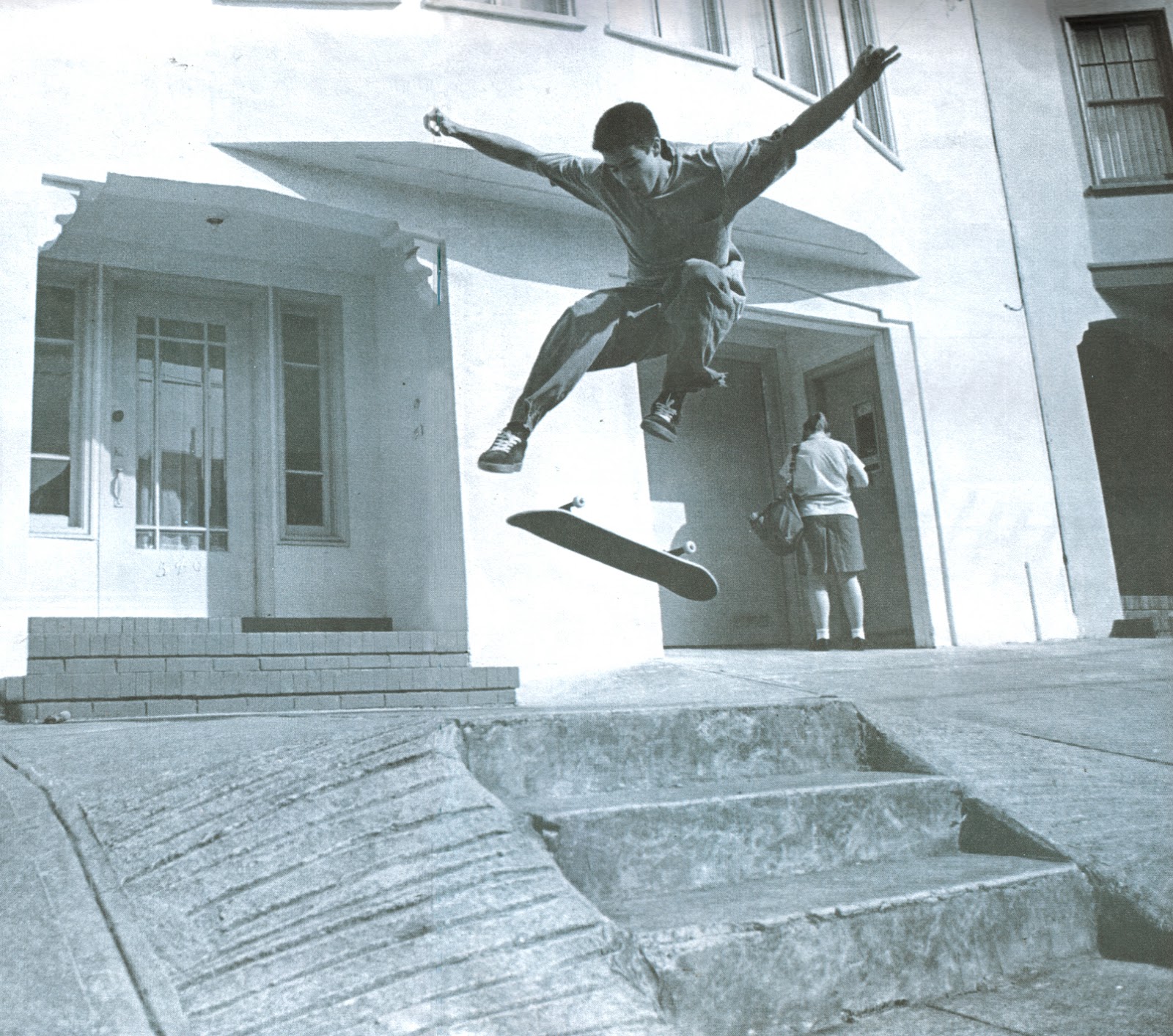 “This is also ’92. This is from a trip I went on to SF. I did that for Slap and Lance Dawes shot that photo. Myself and Alphonzo Rawls, when we were roommates together, we went up to SF and skated and there was a little feature.” 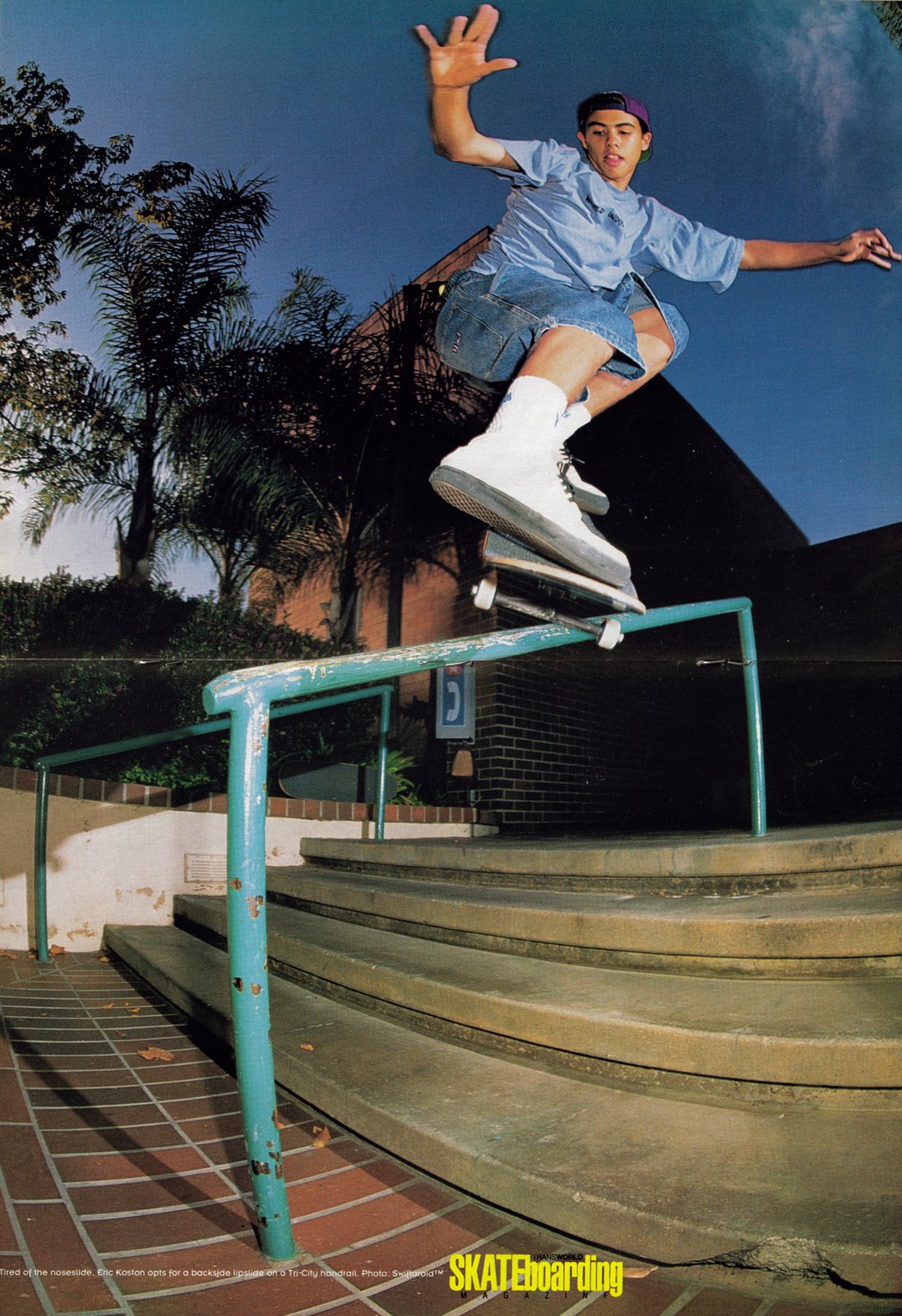 “Oh wow, this is pretty sick. There’s those shorts you were talking about, or those high-water pants. This was a good kind of rail because it was mellow. It was a little high, but it was a mellow rail so it wasn’t a big commitment. The gear is cool; I like it. I love some denim shorts. Those are Blind ones for sure. Those chukka boots too, the white ones with the black sole… I bought those at a Vans outlet. This is a Swift photo.” 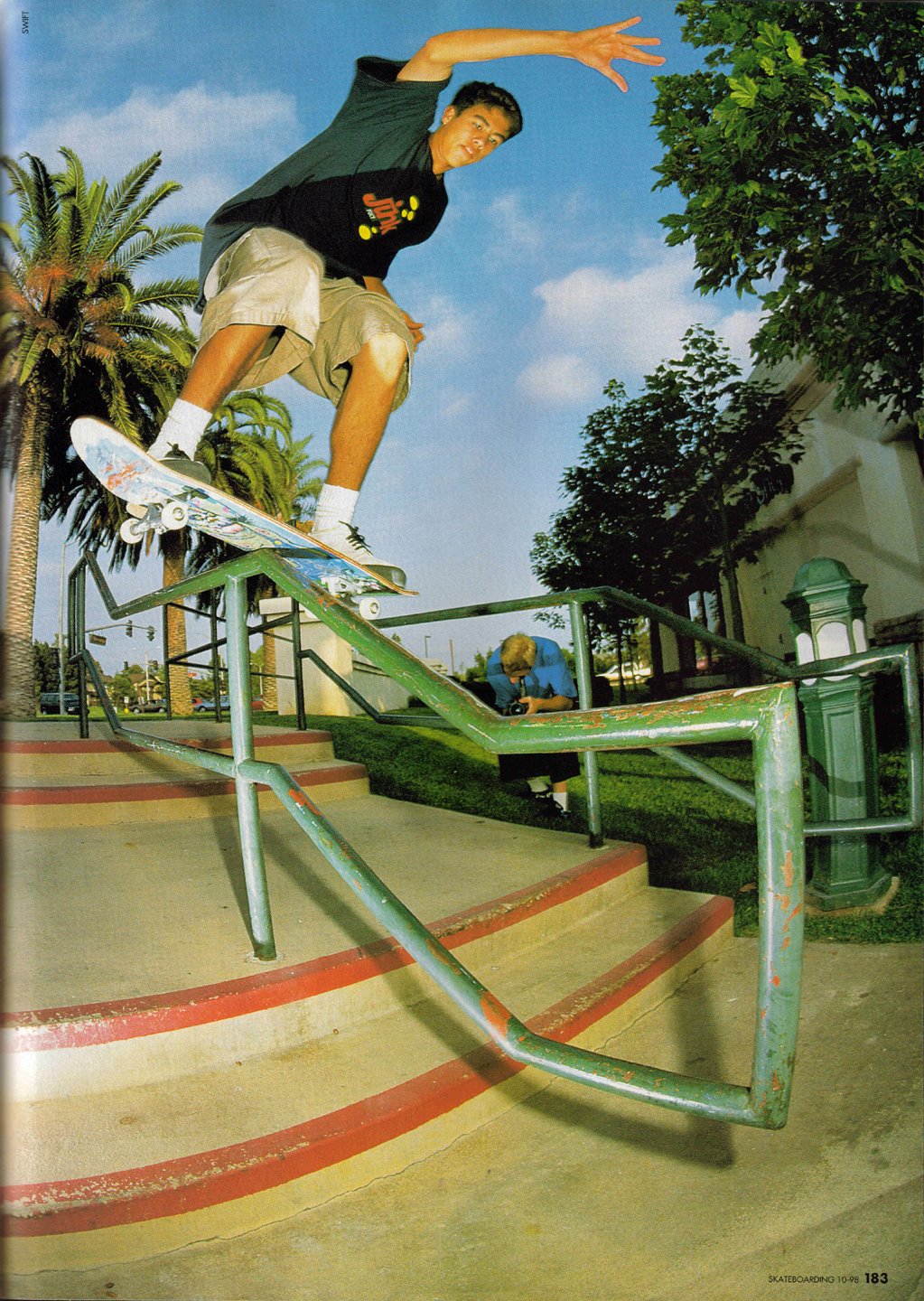 “This one is pretty sick. That’s my friend Scott Sorenson filming. He was a friend of mine who lived near me in San Diego. He skated for Toxic. Remember Toxic? That was random, I don’t even know how we found this; it was in Irvine, California. I don’t know how we even drove up there, it’s kinda strange. But I just boardslid it. There’s also a line in the first 101 video where I noseslide the flat and do a nollie 180 flip after on the flatground. Swift photo again.” 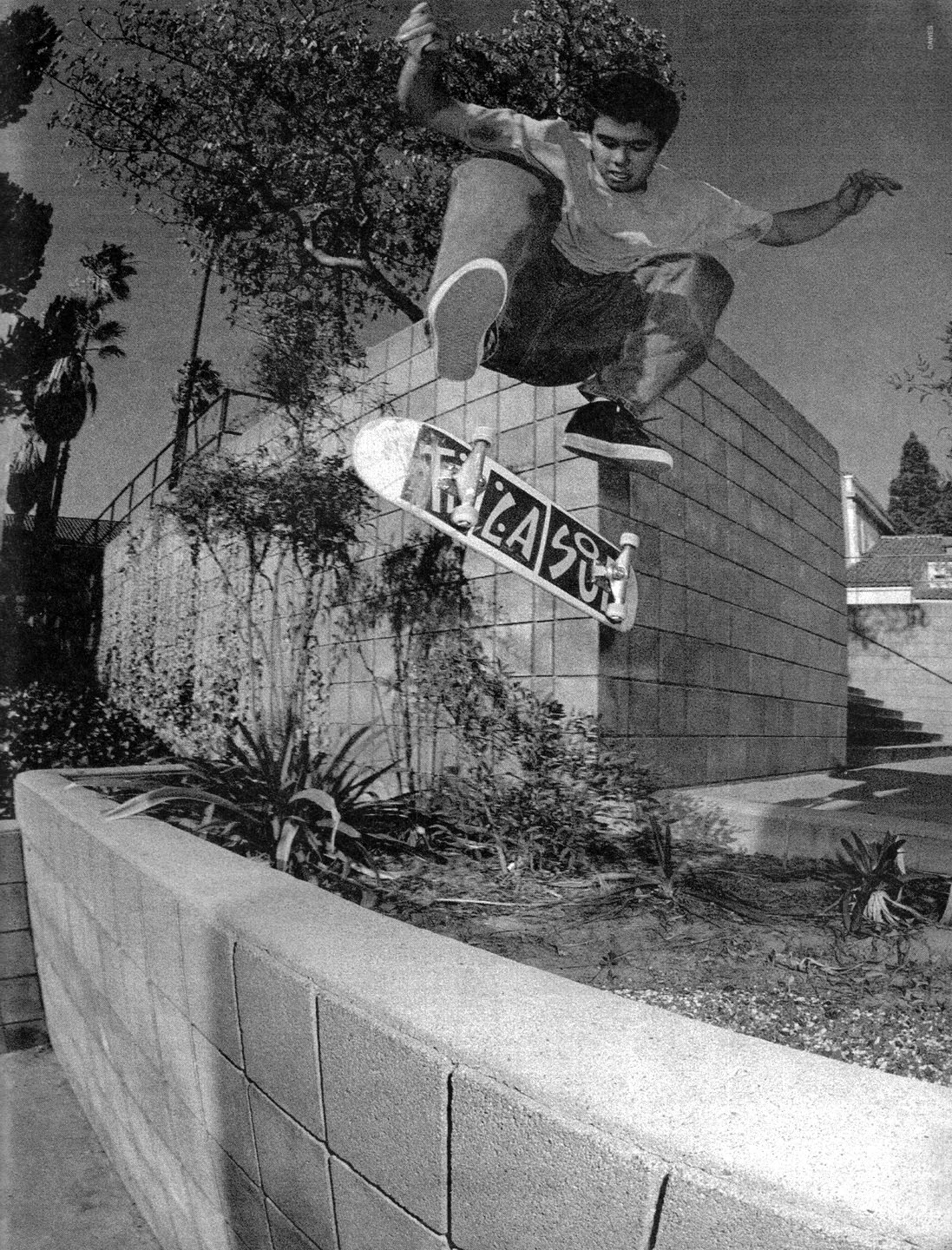 “That’s an early Girl board. That’s at Torrance High, close to where Girl was. That spot’s nearby there. Very funny, random, just a little flat gap with a drop. A rare heelflip photo too, you don’t catch me heelflipping very often over a gap – or on flat for that matter. Dawes shot this.” 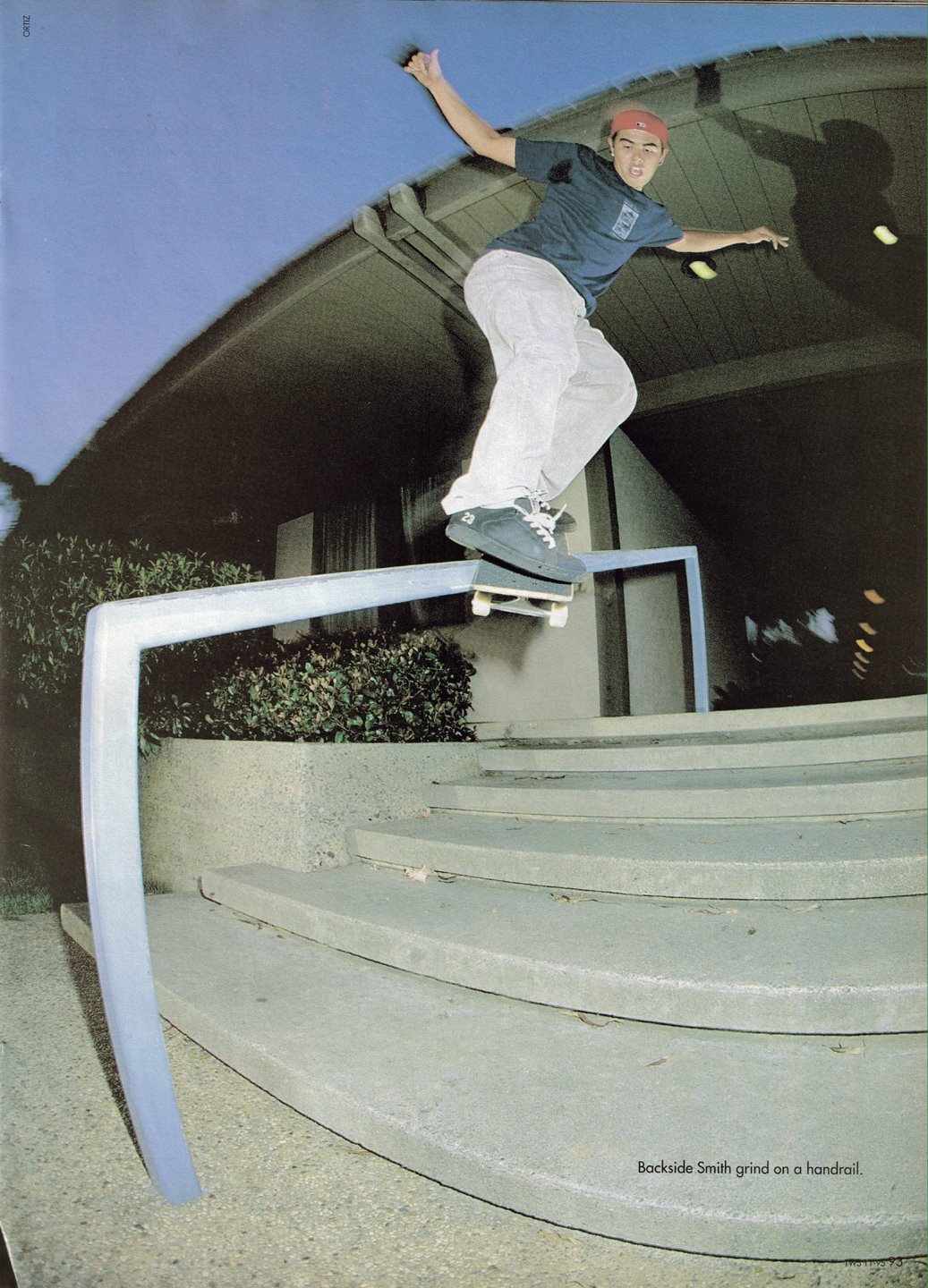 “This was one of the best tech-type trick rails that there ever was. Also it was kind of high, but it was square and mellow. Heath (Kirchart) did back tail kickflip out on this and other people have done some pretty crazy things on this. Matt Ball did a backside 180 fakie five-0 on it. He did it really good… That’s a name you probably haven’t heard in a long time. They were really sick rails, but they’re gone. They took the rails out completely, they didn’t skate-stop them. This was an Ortiz photo.” 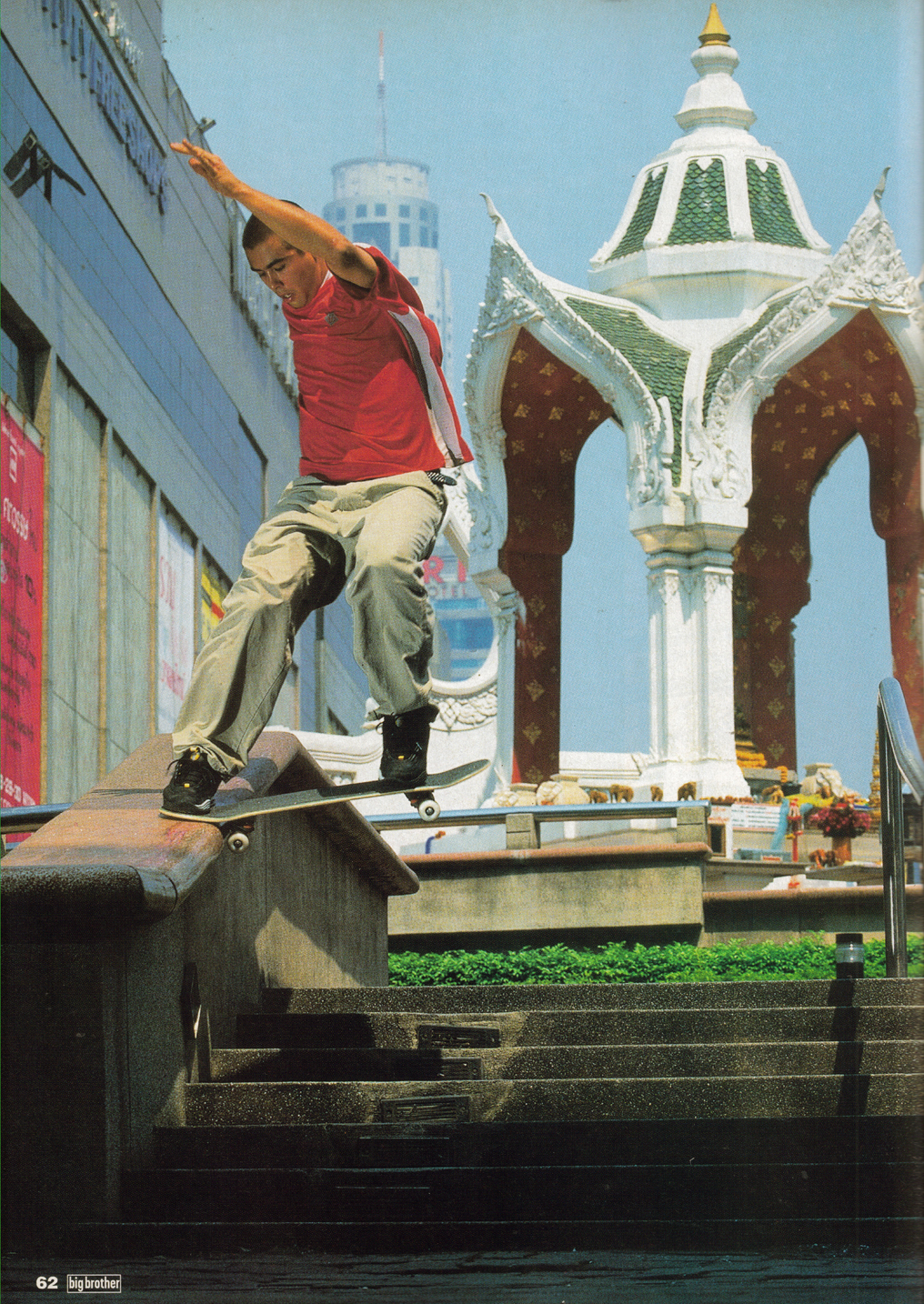 “Ah that’s Bangkok, a Dimitry Elyashkevich photo. That was a fucking fun trip. We did that for Menikmati to do the whole intro thing. Everyone had that whole story: ‘if they had never skated, what would they have been?’ Bangkok was where I was actually born, although I didn’t grow up there, I left when I was a baby. There were so many spots there. It was a funny trip, it was myself, Fred (Mortagne) filming and Dimitry shooting the stuff for Big Brother, there was no crew, it was just us. We just saw all these spots, and most of them had never been skated.” 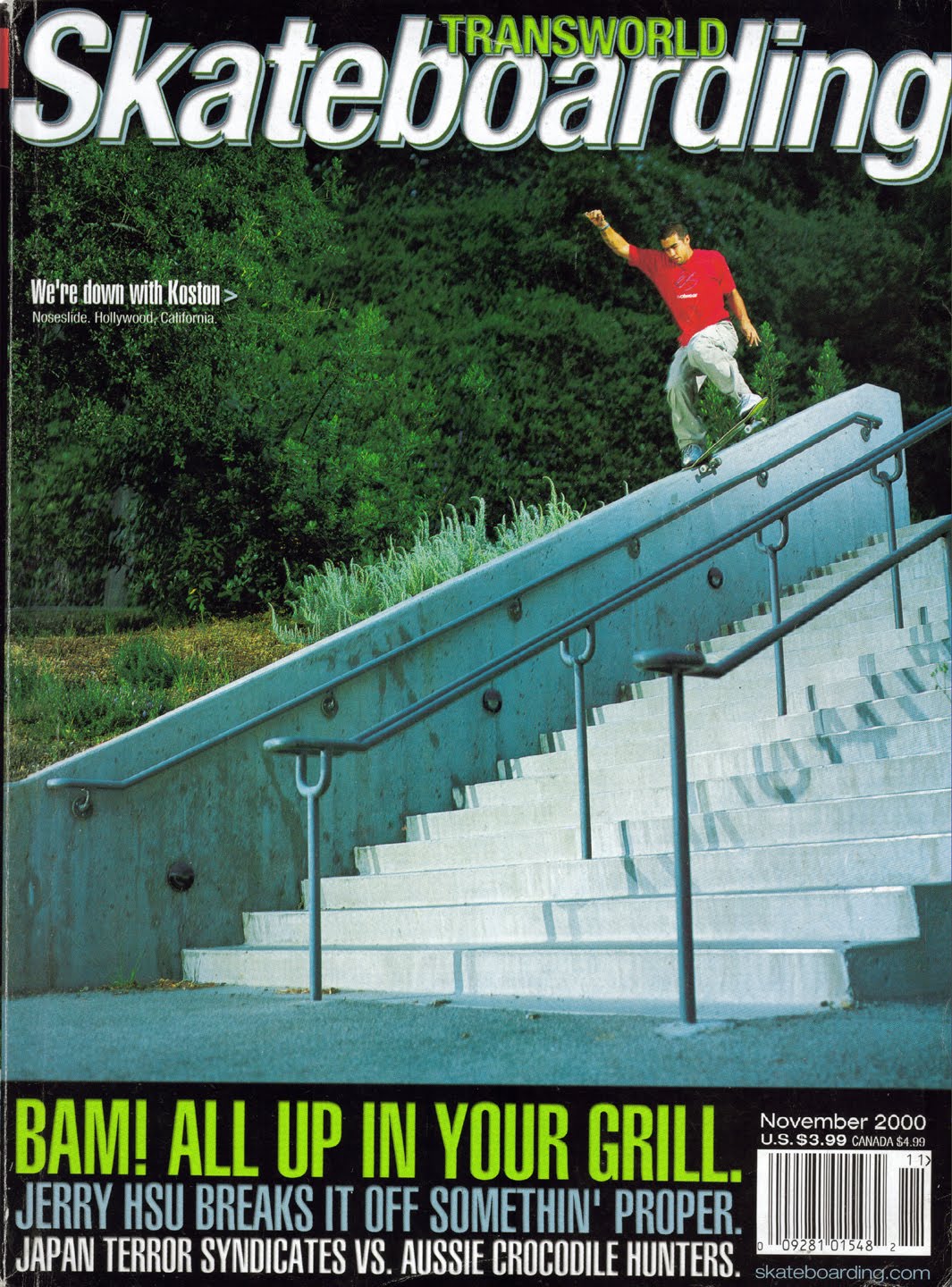 “The good ole’ Hollywood Bowl hubba. The thing is big, but I’d seen it before. I live by it and there’s a freeway on-ramp that I always got onto and as I was getting onto it I’d always look to the left and see that hubba and I’m just like: ‘Man, one day… Someone can skate that. You can at least get a noseslide…’ It’s tall and has a kink and no end really. And this was a period where long noseslides and long hubbas were happening anyways and that was the one way to get down that thing the safest I thought. But I had been looking at that thing for years, and finally I think Menikmati was winding down and I was like: ‘Alright, I’ll try it!’ And it was scary! I had to wax it and I knew I had to just get on. It took me a while just to convince myself to get up there. I knew if I got up there I could jump into these bushes and run it out and there’s a clip of me in Menikmati where I’m kind of making goofy face, but I was scared and freaking out. But I made it to the nose, jumped over, and ran it out. As soon as I did that I just decided to go for it.” 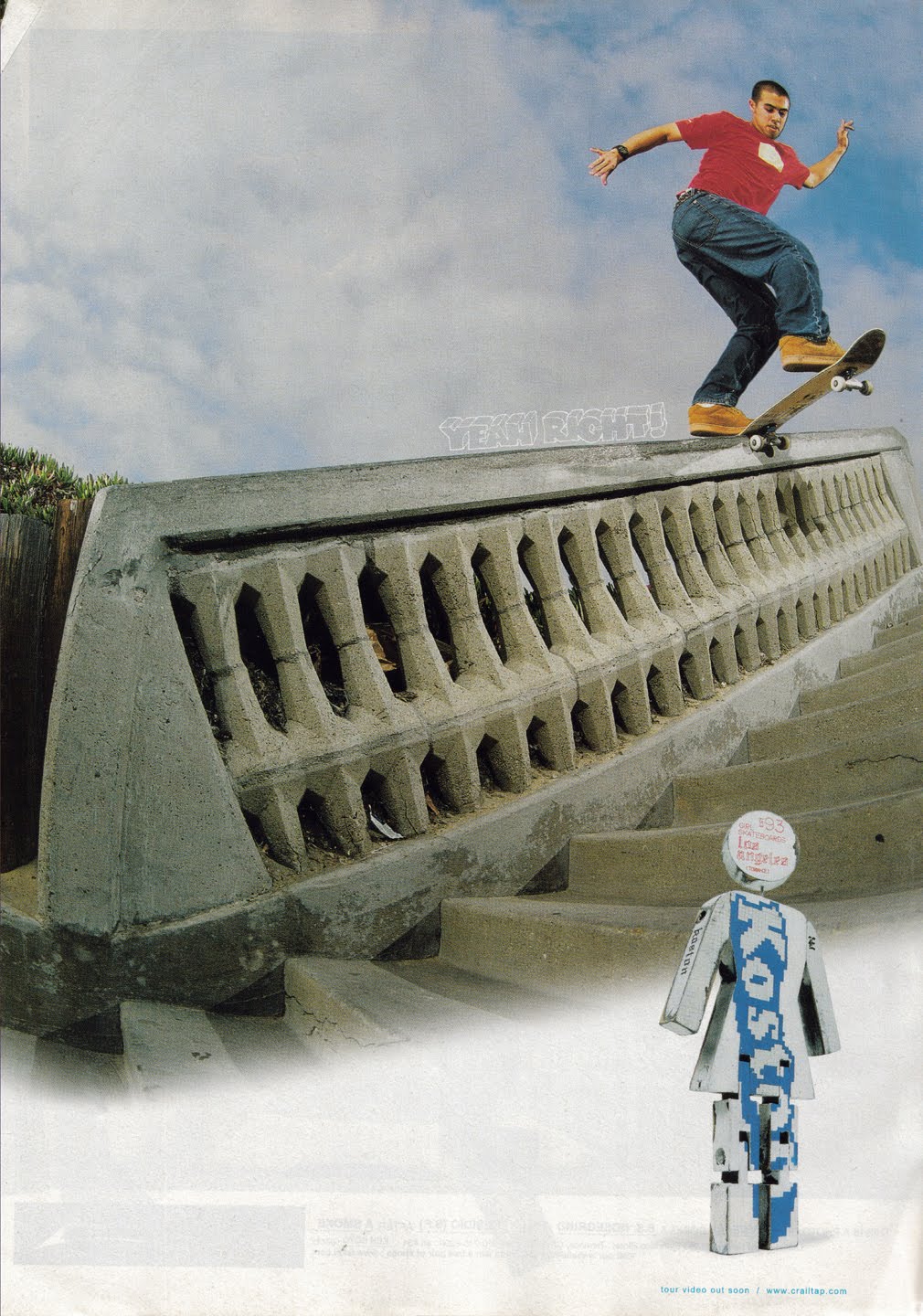 “Atiba photo. This was down in Hermosa Beach, California, right on the beach. It’s a really good hubba, the only thing is it’s a little scary because if you fell there’s these pier posts along the other side so you couldn’t lipslide or boardslide the hubba. It’s more of grind and slide ledge. But luckily that didn’t actually take me too many tries. I think maybe that was the third try. But it’s scary when you have to bail out of a 12-stair back tail or anything. Fortunately that one worked out pretty quickly. It’s a hectic place too, that spot in Hermosa Beach, because both of them, where you cut across are the walkways for the beach so the top one, where I take off is a bike and jogging path, so you have to be very patient. So when you finally find that gap of people it kinda puts the pressure on to do it. ‘I’m not gonna sit here and lose my mind waiting for people to jog by!’” 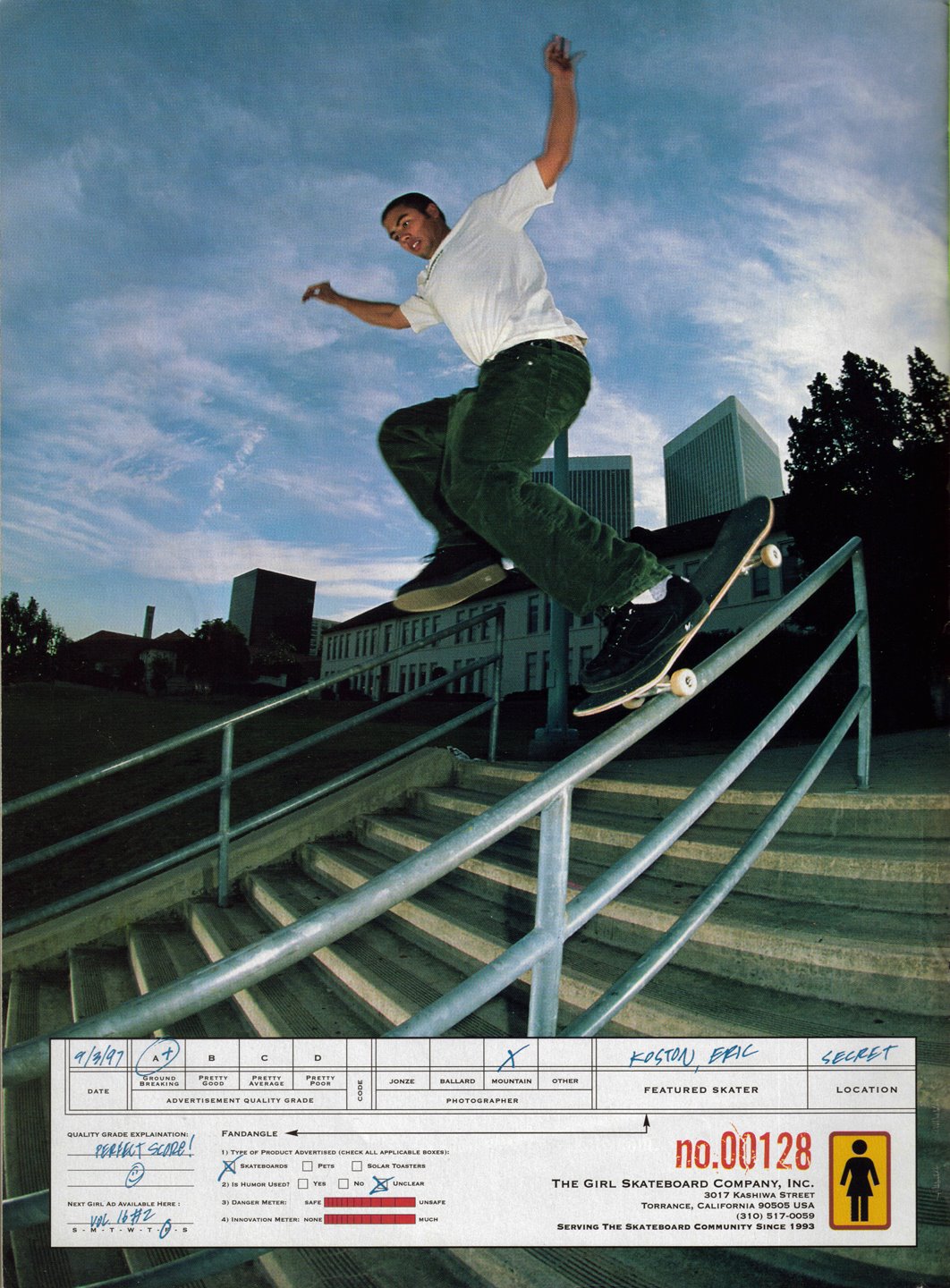 “Ah the Fandangle! That’s a make! The fandangle… What more can I say?” 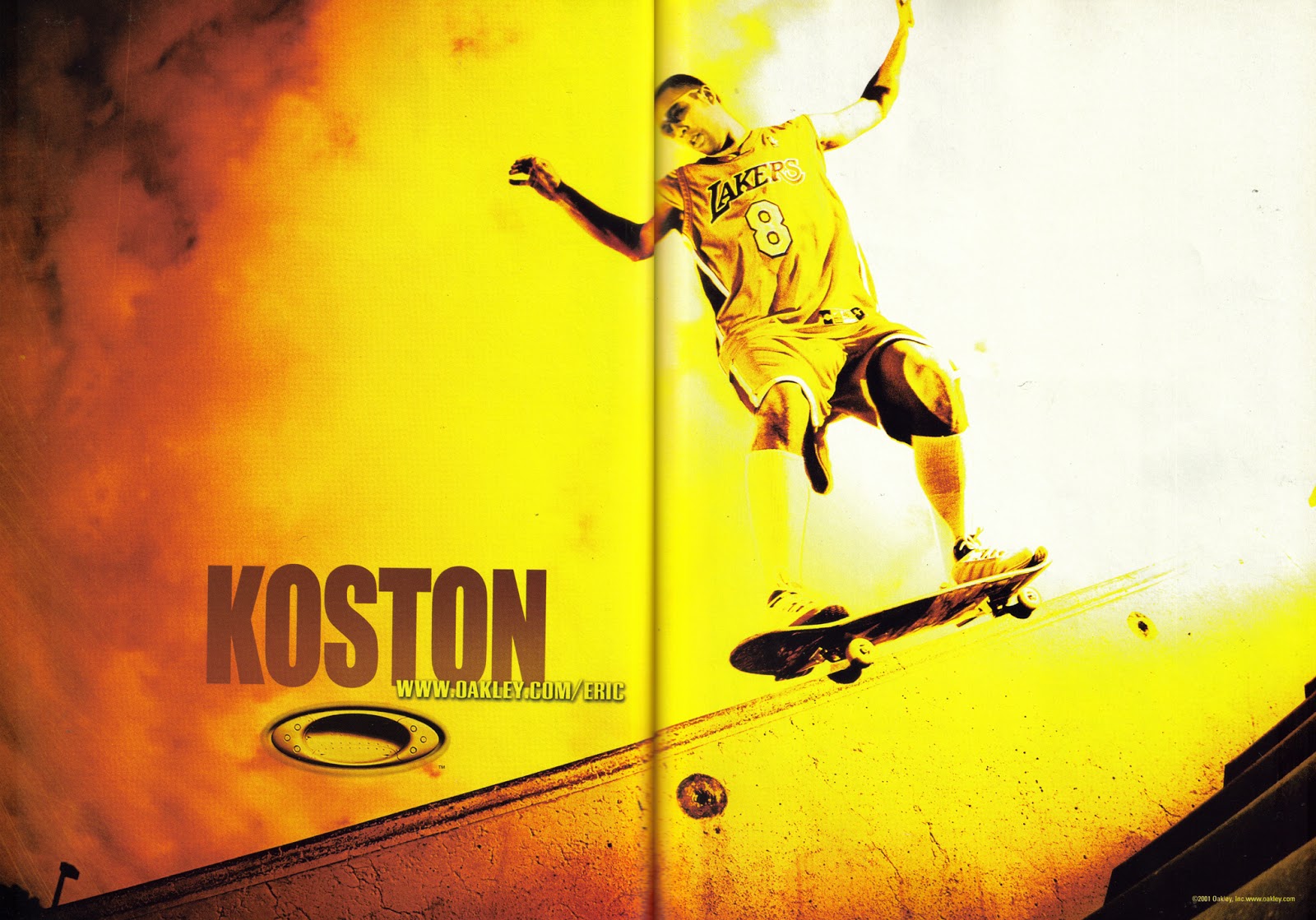 “Ah this is a great one. Ok so I rode for Oakley for a year, this year when the photo was taken. And they needed an ad and I was like: ‘dude… Can I do like whatever I want for the ad?’ And they were like: ‘Yeah whatever, just get us a photo.’ So I was like; “Can you guys send me some of those Blades? I want to look like a basketball player actually.’ Because some of them (basketball players) would wear the Blades, but they’d be clear, just so they don’t get their eyes poked. Because you do get poked in basketball, so some of them do wear the Blades. Although I’m wearing Kobe’s (Bryant) jersey, at the time there was a guy playing for the Lakers, Horace Grant, who wore them. So I was like: ‘ I wanna look like him.’ I already had the whole outfit just from being a fan, but I didn’t have Horace’s jersey, and I just went to this hubba and shot this ad looking like a basketball player. I thought it would be funny, but I ended up getting them sued. The NBA sued Oakley because they didn’t get the rights to use Laker’s official clothing in the ad. That was a little ‘oops’ but that was back in the day when you didn’t think about that stuff.” 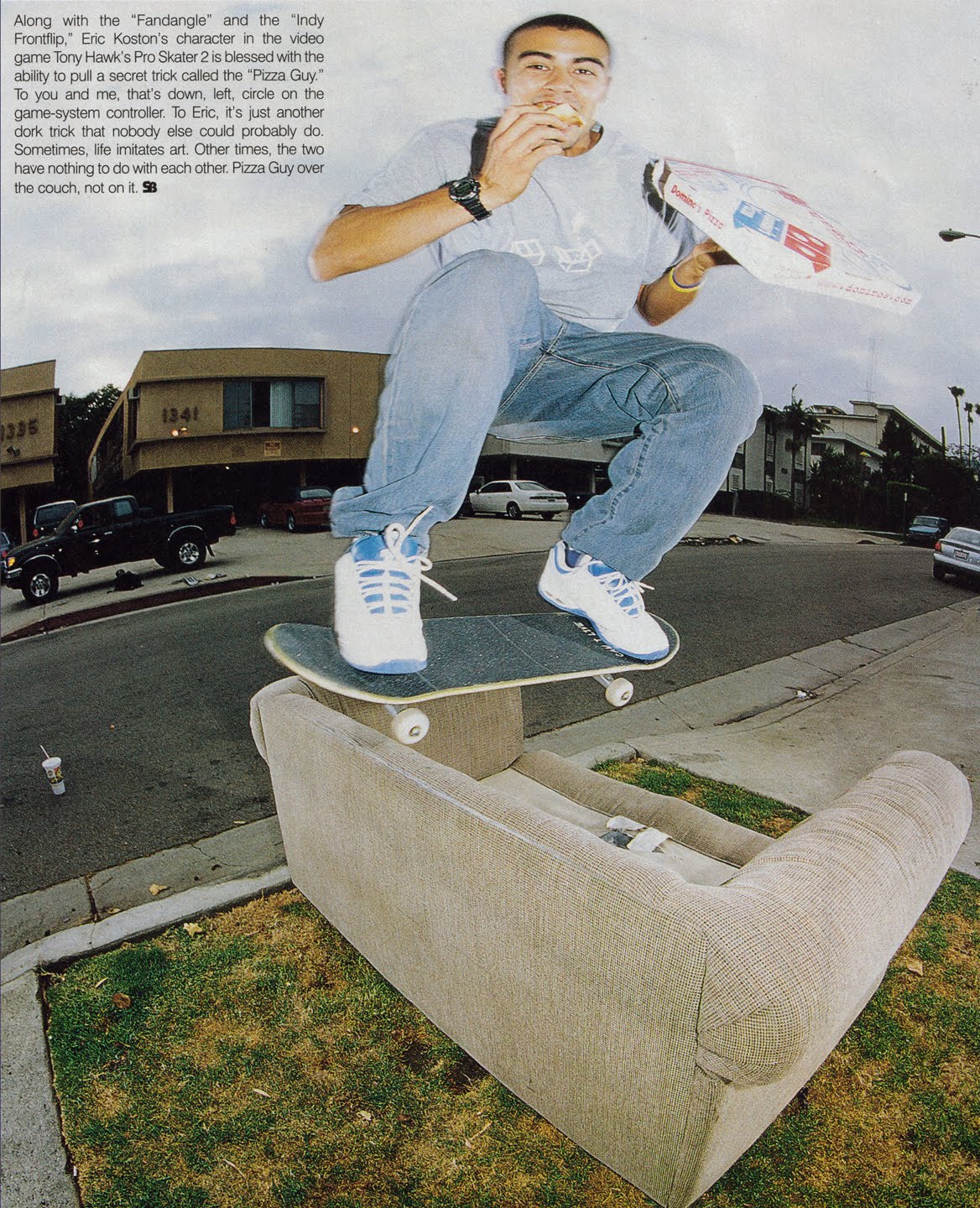 “Oh yeah, pizza guy. That was just from Chomp On This. We were skating this spot and Tim Gavin was there and he ordered a pizza to the skate spot. He literally called and used the address right there on the street and he told them to come and he ordered a pizza because we were actually just trying to skate and do tricks over this thing with the couch there and trying to do tricks over that. I punched a whole in the bottom so my thumb could hold the box so I could take a bite. This was in Skateboarder.” 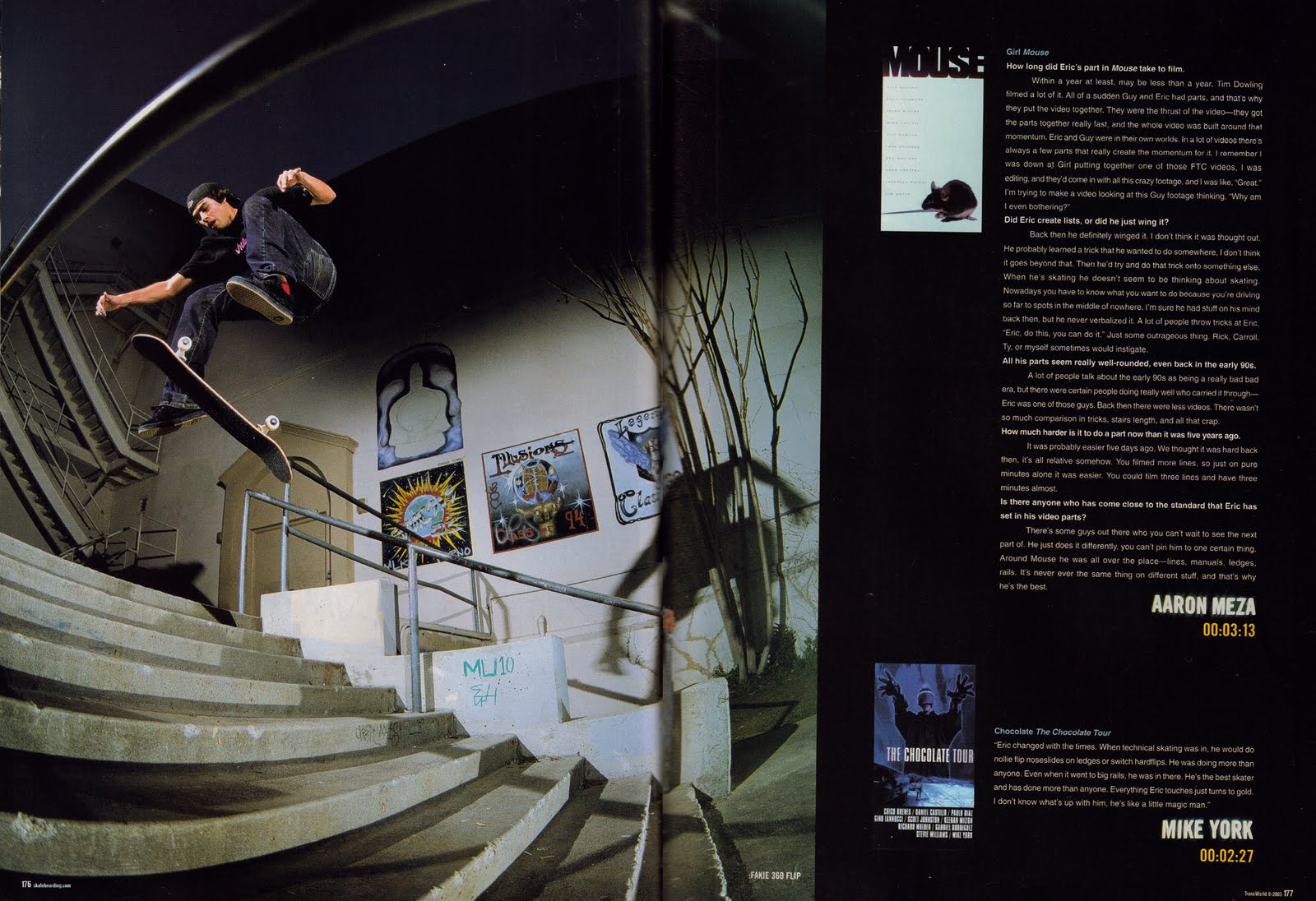 “Ah yeah the fakie 360 flip with long hair. Yeah I grew my hair out because I just wanted to… You know the original thing was you know when (Brandon) Biebel got cornrows and at that time I had a shaved head and I was like: ‘Dude, I wanna get cornrows!’ so I grew my hair out a lot during a good part of Yeah Right!. I actually let it grow for a year and a half and I actually never got cornrows. And I just had hair and I got used to having it and that’s it. Scuba was there filming that line. It’s a good photo Atiba shot. And somebody had it tattooed on their arm and showed it to me and then I signed underneath it then he tattooed my signature after – pretty nuts.” 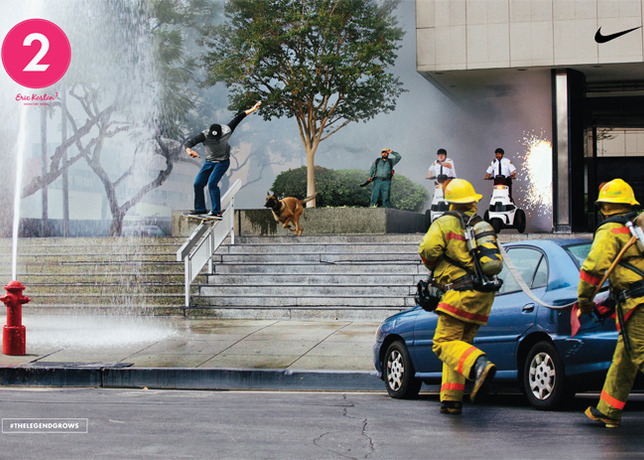 “Ok this is the Koston 2 campaign; it was great actually. It was really fun. It was good because it started as an idea that was not as evolved as what happened here… As I saw what the concept was I could put in my two cents into how this could actually work. It was ‘the legend grows’, it’s this sort of exaggerated story, that becomes rumour, and it keeps evolving and the truth becomes super-farfetched… It’s funny because of skateboarding, where rumours travel very fast, and it was a bit of a jab at that you know? In a humourous way, because you here these crazy rumours about people and it’s not always true, it’s just word of mouth. But yeah it was really fun doing this campaign and the cameos that were in it. They were the ones telling the tale as it evolved.”

(All images via the Chrome Ball Incident)