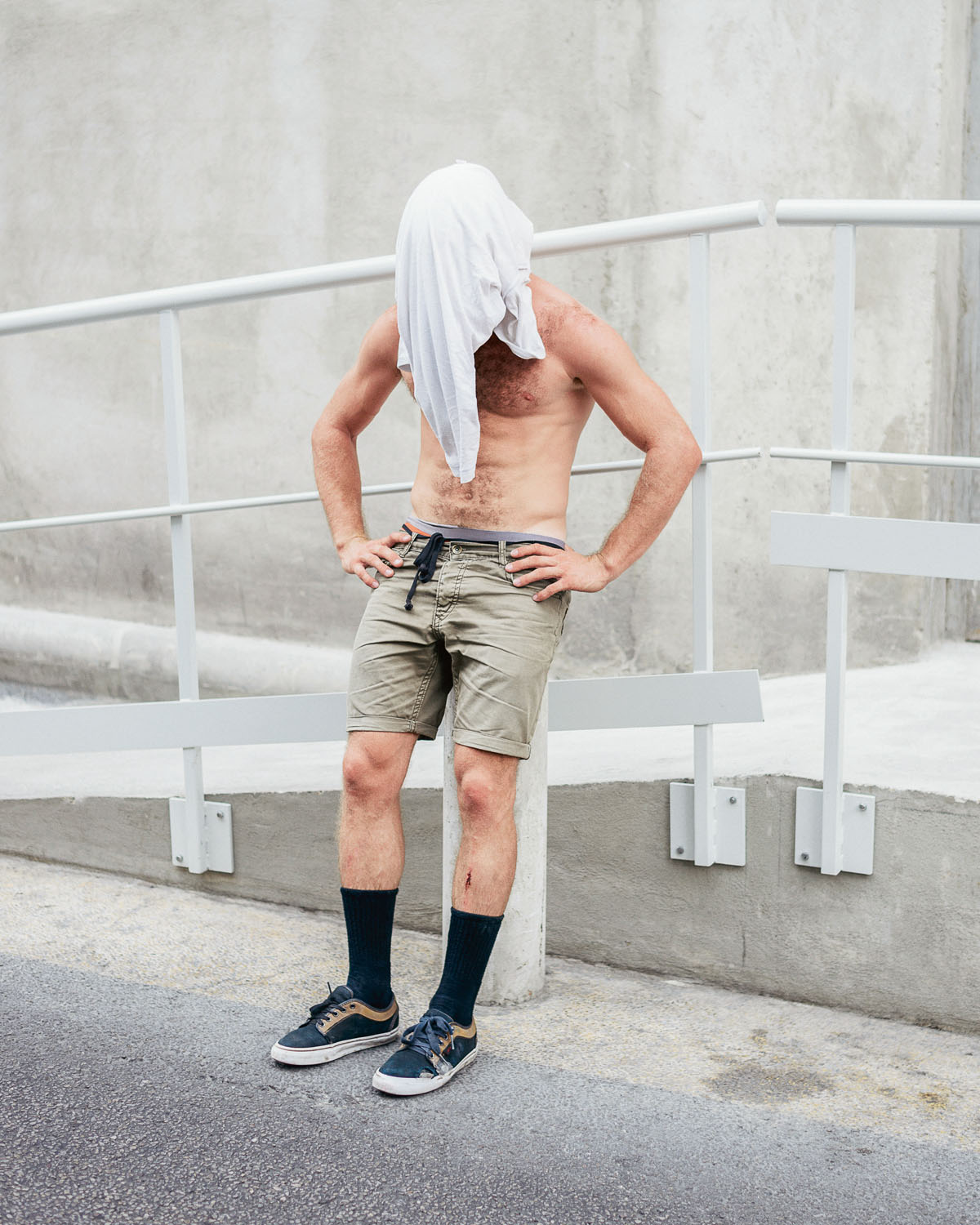 Before we get into this I should probably give you guys a bit of context… The first thing you need to know about our friend Mika here is that he has quite an unconventional job for a sponsored skater: he’s a personal trainer. The second is that until relatively recently, karate, pole-vaulting and a wealth of other athletic disciplines were higher on his agenda than skateboarding.
So why does a man with such a passion for ‘traditional’ sports decide to focus his energy on an activity like ours? Could it be the absence of ‘rules?’ Is it the culture that surrounds it? Or is it the fact that through video parts and photos in magazines you get to create something that lasts?
We shouldn’t ignore what sets skateboarding apart from other sports and Mika’s fresh perspective on the matter served as a healthy reminder of that.

All right buddy? What have you been up to lately? Working a lot?
Yeah I’m good, thanks. Not been up to much actually. I don’t really have that many regular clients but since I’m the one going to their homes the money’s decent enough to get by.

What are your clients like?
All pretty cool really. People think that I just deal with meatheads and girls that want better butts, but it’s not like that at all. My clients are just regular people, often parents that don’t have time to exercise because of the full time job/kid combo.

You were also a sponsored skater’s personal trainer for a bit as well right? How was that?
Yeah little Robin Bolian (Antiz and Vans Europe rider). It was a bit weird but kind of better in a way. With my current clients the work I do is really just getting them into shape. With Robin it was interesting because it was sport specific and he was already really fit enough for me to properly work him. 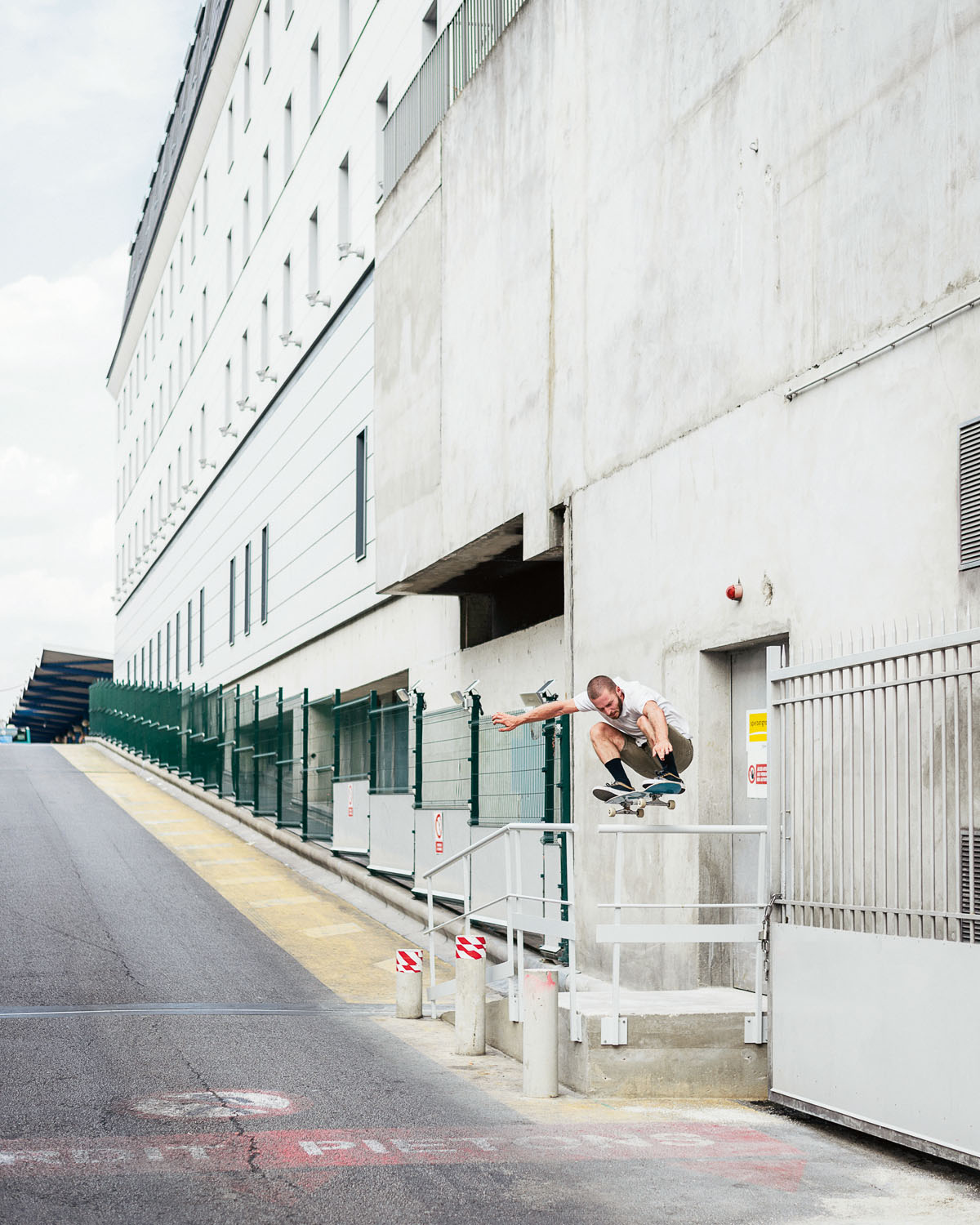 And you know exactly what muscles to train for skateboarding.
Yeah. Although a lot of my work was just rebalancing the distribution of his muscle mass. Skateboarding is such an asymmetric activity. When you’re always slamming and putting all your weight on one side of your body it can affect your growth. We don’t want him to be all crooked by the time he turns 25…

Plus maybe it’ll help him get better at skating switch, haha.
Yeah who knows… Maybe thanks to me he’ll stop skating bowls and start skating like Shane O’Neil.

And how did that whole thing come about in the first place?
His dad approached me. 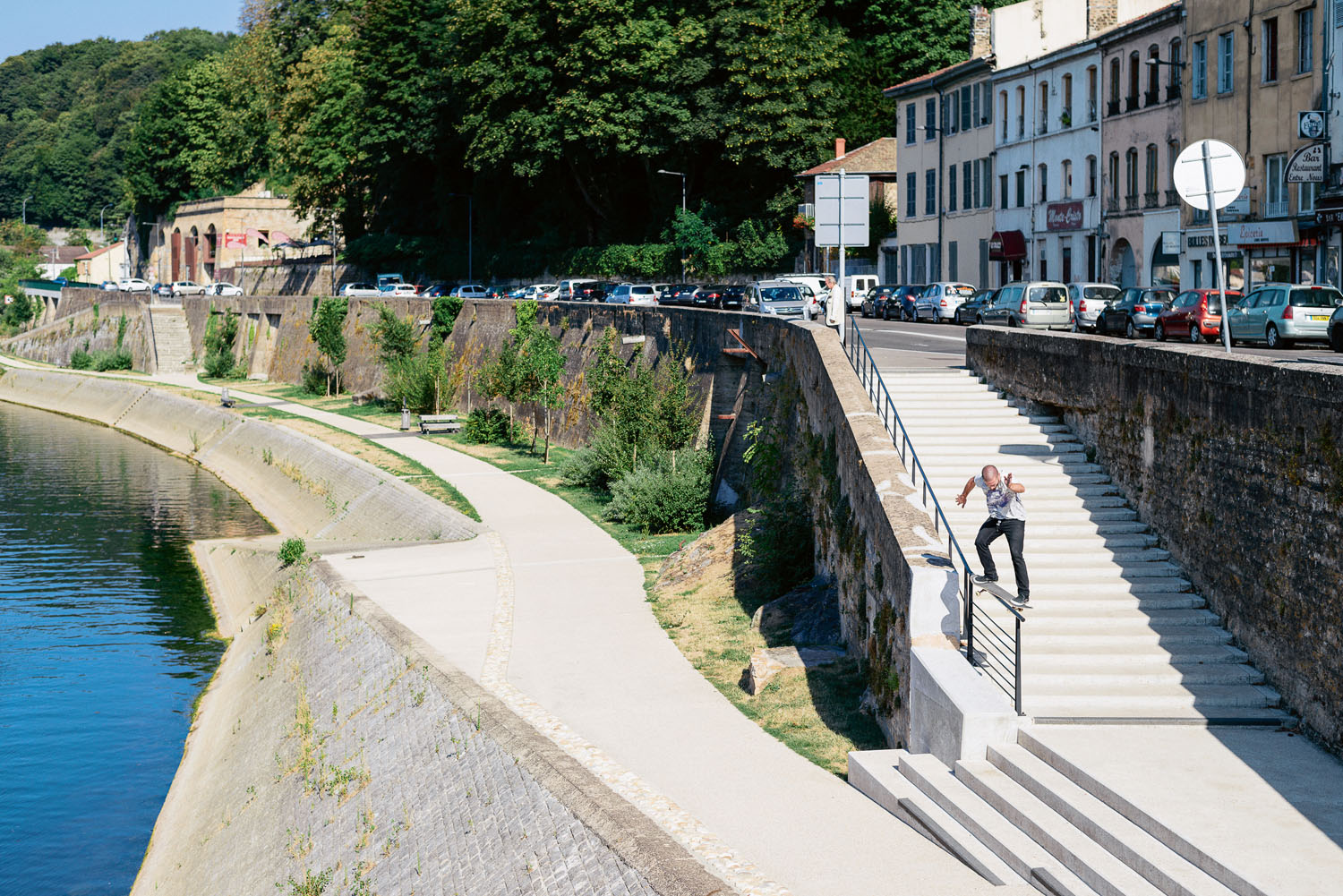 Did working with him make you consider specialising in skateboarders? Like a personal trainer for pros?
I don’t really think there’s enough of a market for me to just have skateboarders as clients. Unless I move to LA or something… Plus I don’t really know how I’d feel about being responsible for creating an army of super athletic skatepark killers… It’s not really the style of skating I’m into. It could be a good way to make money but I wouldn’t want to put my name to it.

“You see that guy over there? If you pay him enough he can make you the next Nyjah!”
Don’t be silly, haha. You know that with skating it’s all about technique. Some of the best skaters in the world have never had any proper physical training… 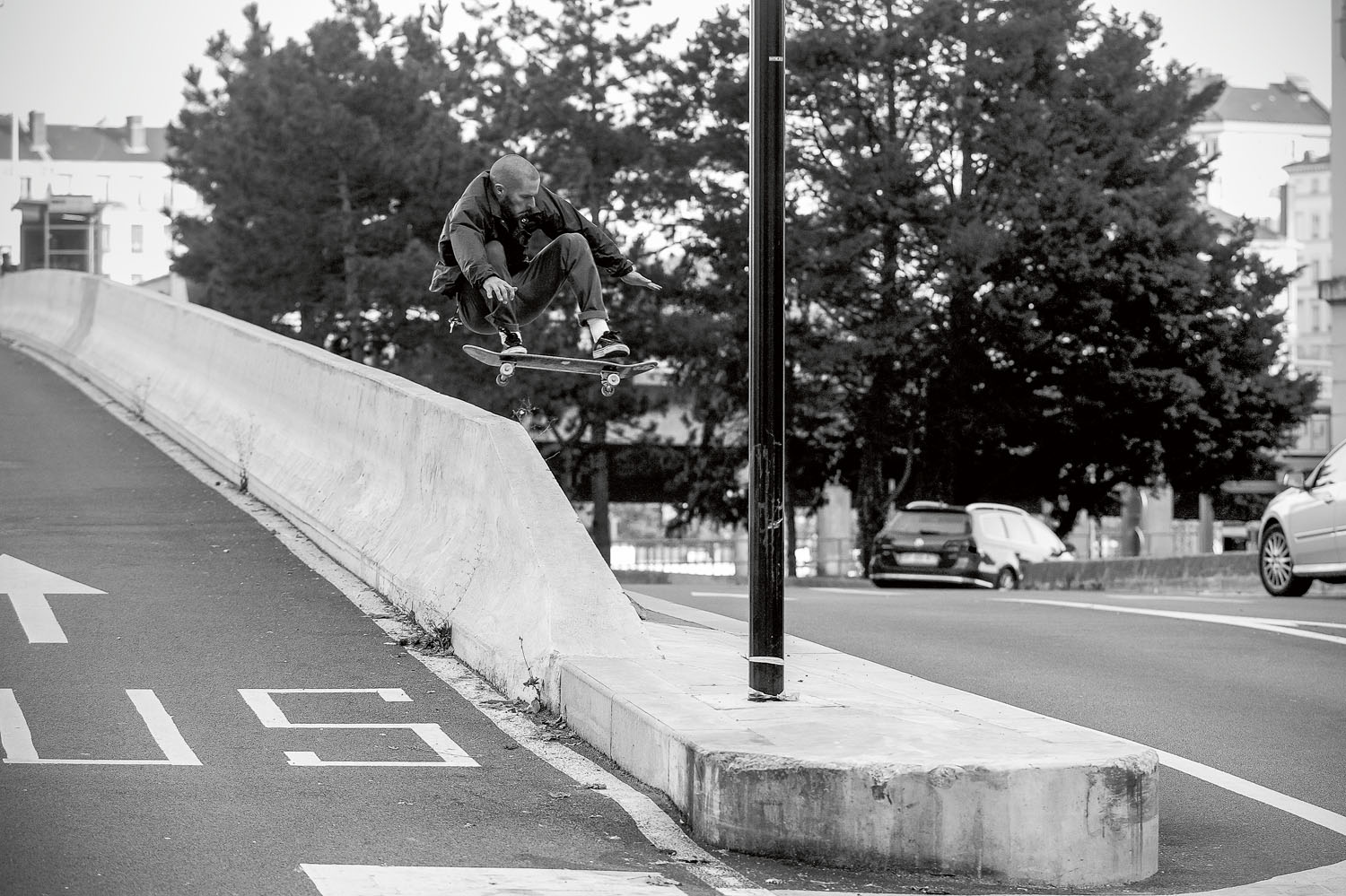 It does definitely help though right?
Yeah of course, although I’d say mainly for stamina and absorbing impact/slamming. Some skaters look like they are going to crumble every time they land a trick and then you’ve got guys like Nyjah that’ll jump down massive gaps without flinching. There’s a reason for this.

So you think a lot of pros have personal trainers?
Oh yeah. All the ‘athlete’ style pros like Pedro Barros, Nyjah and
Chris Cole definitely have them.

Before you properly got into skating a lot of your time was spent doing ‘traditional’ sports. What made you decide to start investing more of it into skating?
Yeah for a long time I did a lot of karate, synchronised swimming and athletics (that I still do once a week). I don’t know… Possibly that there’s more to skateboarding than doing tricks that feel good. I like getting a good photo or a clip. I like creating stuff that I think ‘looks nice’ with a filmer or a photographer. I don’t think I’d be as into it if it were just a physical activity. When you start to really discover skateboarding you do more than just realise the trick possibilities are endless, you learn about the wealth of culture and history that surrounds it. I really don’t understand how kids like Aurélien Giraud (the kid from Lyon that just won Tampa Am) can be so motivated to skate without acknowledging that dimension of it. It’s ignoring what sets us apart from all the other physical activities. 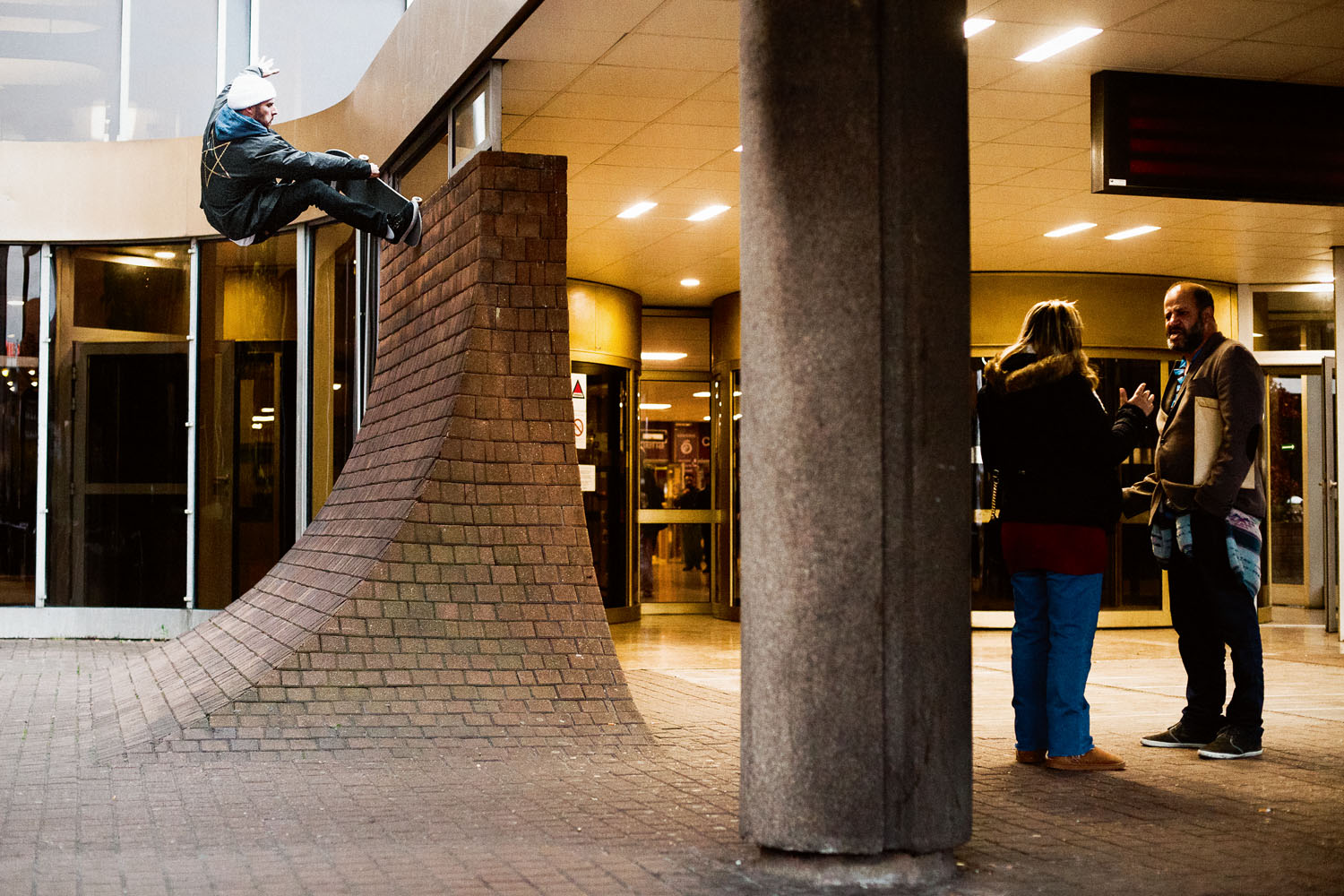 Is there anything you miss about those sports?
Well the only thing is that all the ‘sports’ I do now are self-taught: in skateboarding you obviously teach yourself virtually everything and at the moment I don’t have a coach when I practise athletics. It’s just like with everything else in life these days: if you need to learn about something you just go online and read about it or watch a tutorial. I’m a bit tired of it… I enjoy having someone knowledgeable show me exactly how something is supposed to be done – it’s reassuring.

Do you think that could apply to skateboarding though?
I don’t know, maybe. In the suburbs where I grew up skating there were no other skaters. I skated for a long time before seeing a magazine, a video or even another skater. At the beginning everything I’d learn would be from randomly trying to do different stuff with my feet when I’d be standing on my board… It was tough. So when a skate camp (based in Marseille) recently invited me and some Antiz riders to hang out with the kids and I saw how stoked they were I thought to myself: ‘I could have really enjoyed getting tips on certain tricks like that’.

Any interesting parallels between skateboarding and some of the sports we mentioned earlier? I bet pole vaulting feels incredible…
Yeah but it’s so frustrating, almost even more than skateboarding. It usually takes you about 10 tries to get an attempt you are actually stoked on, sort of like if you are trying a trick down a rail or something. Only in skating it’s different because if you get sick of struggling to land something hard you can always have fun with another trick – something you know you can do every go. In pole vaulting you don’t have that option, there isn’t ‘another trick’ you can try. It’s just you and the pole. I once went through a six-month phase of not even being able to ‘plant’. I’d take my run up, prepare for the jump and pussy out at the last minute. Something like that is so draining psychologically. 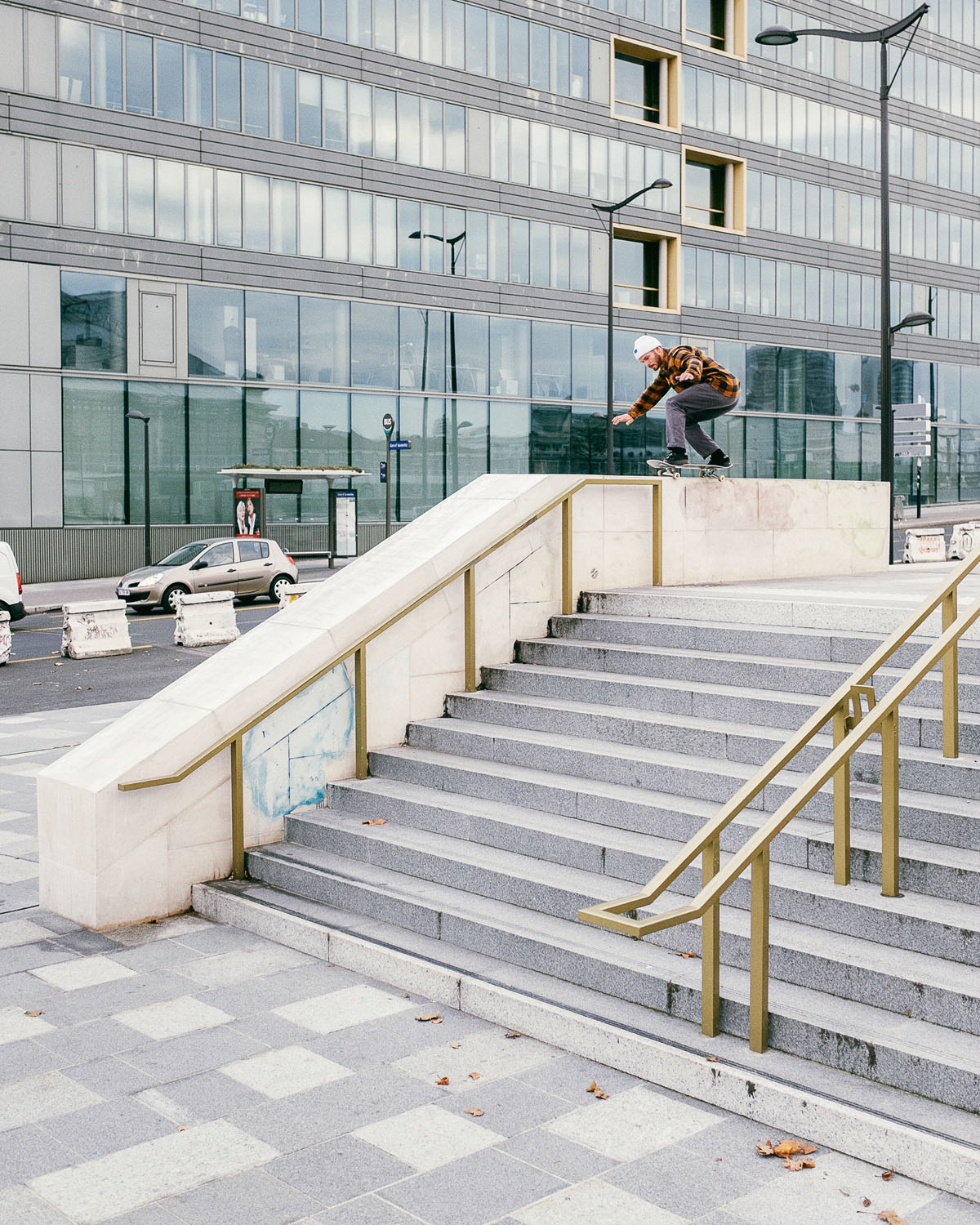 How’s riding for Antiz? Are you going to have anything in their new video?
Yeah it’s really good. Travelling with those guys is so fun… They started giving me and three other guys (Robin Bolian, Uryan Rodet and Quentin Boillon) from Lyon boards virtually at the same time as well so we’ve got a little crew going. I get along with them really well and like me they all prefer going on missions to staying at Hotel De Ville all day, which is cool too.
Regarding the video I think there will be a ‘flowbo’ part with all four of us. Although I’m not exactly sure what they’ve got planned for Robin, he might be getting his own section. He’s on another level that kid…

What?! So he’s gotten on the real team before you even though you’re the one that trained him up to become the ripper he is today?
I guess, haha. But at least deep down I know that if he’s that good at skating, on Antiz and winning all these comps it’s only thanks to me, haha.

Well I can’t wait to see what you, your ex-client and the rest of the team come through with for this video. Cheers for the chat! 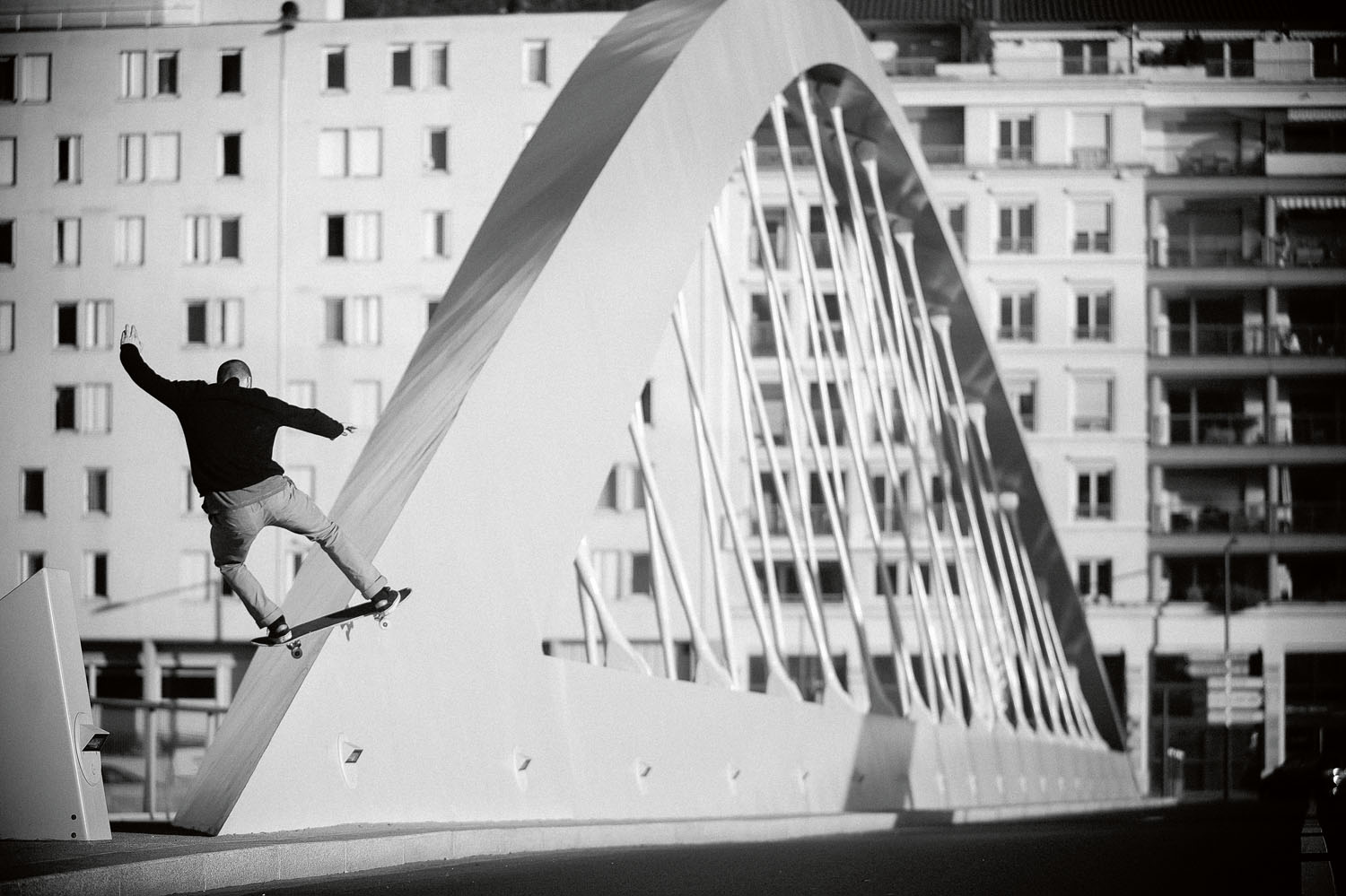 Boardslide up to transfer in Lyon. Ph. Loic Benoit