Putting the Tea in Team – Lovenskate and Carhartt in India

There are few places skateboarding has not landed in, and for us, and what we do, the world is getting smaller and smaller. However, the fact that you can meet a guy on a DIY build in Bolivia, and two years later be drinking beers with him and his lady in their apartment in Bangalore, is testament to how the adventure is getting bigger and bigger. So, how did 12 guys end up in South India with Aloo Jeera down their shirts and concrete in their eyes? Well, we (Lovenskate) have been talking to long time supporter and tea enthusiast Bertrand (Carhartt WIP) for a while about doing another Tea-based project together. Having made teacups, flasks, and a skate-able mug together, the next logical step seemed to be to go to the source itself, the tea plantations of the Western Ghats, and why not help expand ‘The Cave’ skatepark in Bangalore and bomb some hills along the way!? 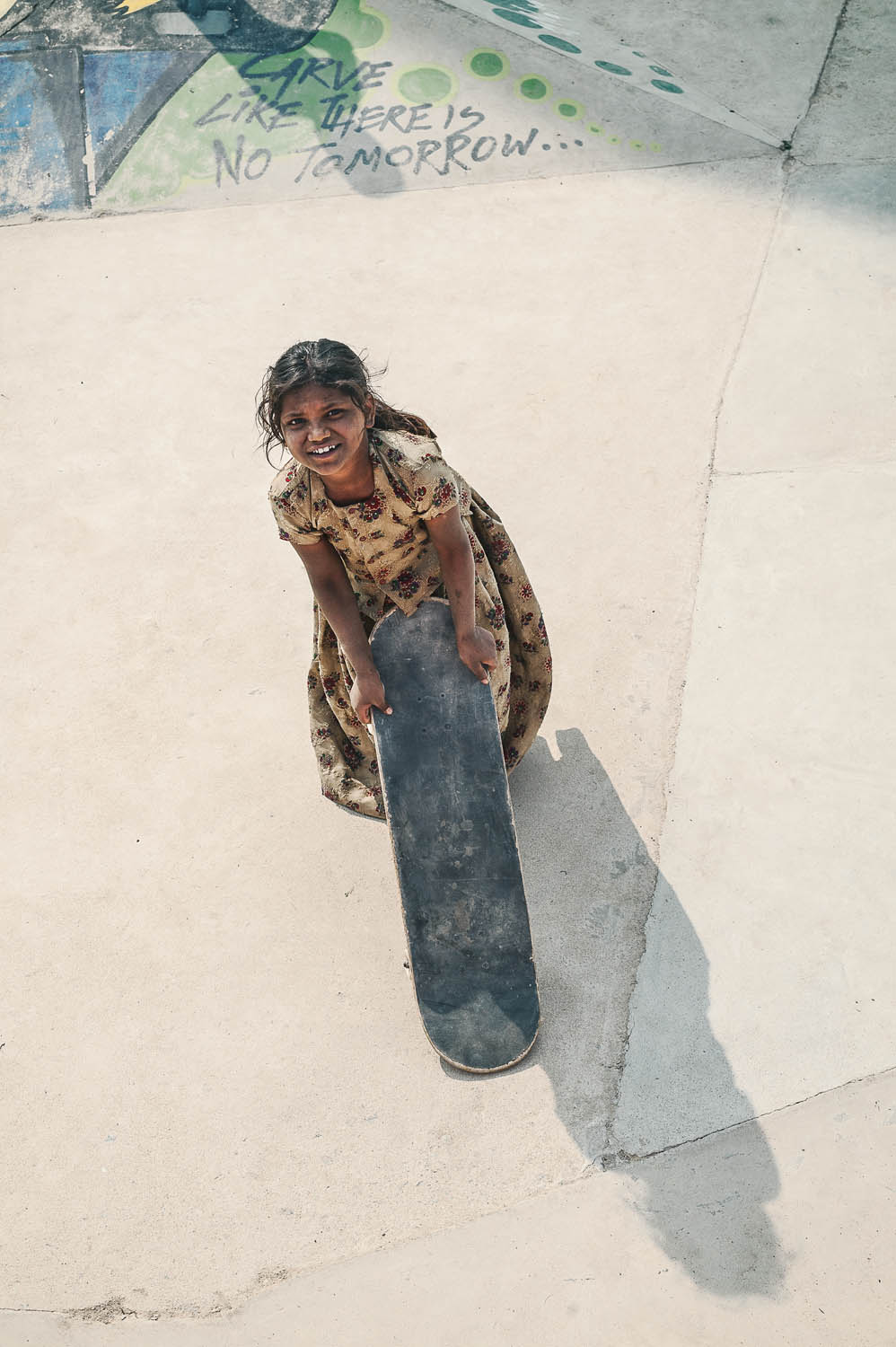 The crew was heavy: Samu Karvonen, Ewen Bower, Lee Santer, Rich West, Aaron Wilmot, Matt Ransom, Denis Lynn, Alex Hallford, Alex Barton, Dan Hill, self appointed TM Mikey Patrick, and me. Now, the last thing you want to read is, ‘on day one we did this, and this private joke happened, and then on day two blah blah’, because everyone has been on a trip with their crew, and sometimes you just can’t do it justice in words. So what I’ll do is share some notes, some facts, and some wisdom. Hopefully it will help inspire your next journey to some far-flung corner of the globe.

The Chaos
“The roads here are insane! Imagine being an ambulance driver here! You want a rush?!”
– Alex Hallford on the streets of Bangalore.

In India, one constant is chaos. It’s unimaginably fast where you should be going slow and desperately slow when there is all the room in the world to go fast. Crazy to think that the place that gave us yoga and Ayurveda (the natural science of health longevity and rejuvenation), is the same place that allows you to drive the wrong way down a motorway, set fire to your weekly rubbish on the pavement, let the holy cow graze on plastic in the central reservation, and will without question drag you naked out of the sea at midnight and send you to bed!

The Bus
“Does anyone have a lighter?”
– Samu Karvonen 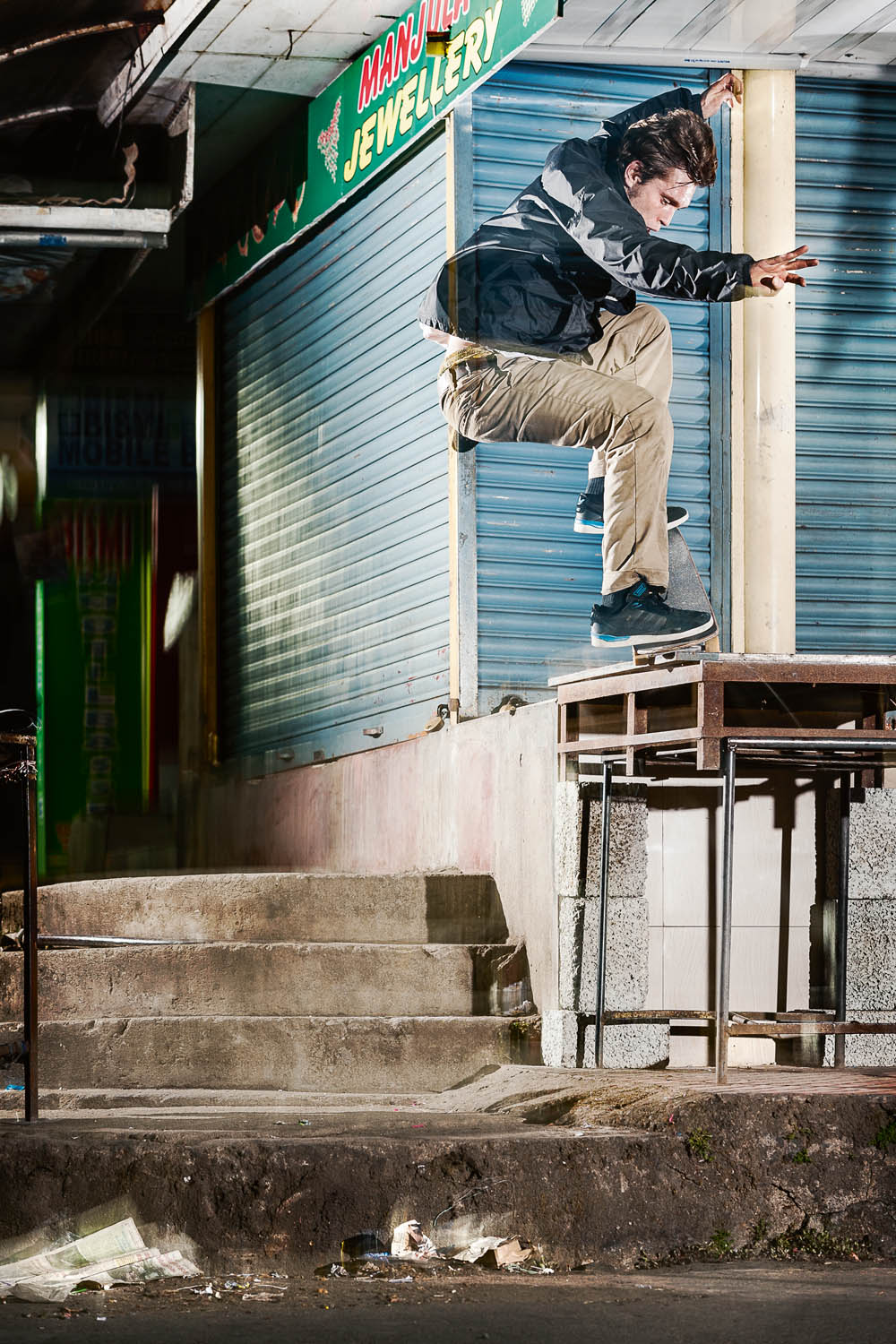 India is a big place, and the roads are long. If you’re going on a trip, it’s best to pay extra for a big bus and very patient driver who understands that on the journey, to keep moral high, it is important to make regular toilet stops, and to buy beer and fireworks.
Fags are cheap, but lighters are few and far between, so if you’re Samu, and you don’t smoke, and the bus is several hundred miles from the next stop, make sure you just throw the lighter out of the window and make everyone really fucking angry.
The dangers of pissing by the roadside in Munnar are few and far between, the worst being potential elephant attacks.

The Alcohol
Kerala has a state-wide ban on the sale of alcohol. But here, like everywhere else in the world, people love to get plastered; so they’ve come up with a genius way of getting round it. Picture the scene:
‘We’d like to order some beers please.’
‘Sorry sir, we are not permitted to serve beer here, we only have the special tea.’
‘OK, and what’s the special tea?’
‘Beer sir.’
‘OK, then 12 special teas please.’
‘Very good sir.’
(Waiter returns with 12 beers in mugs)
Rules are rules in India, and bribes are considered insulting. If you’re caught with alcohol, expect a heavy fine or worse. However it pays to always keep back at least 50 rupees from the beer shop to payoff the border control and to stop the police tearing the bus apart. 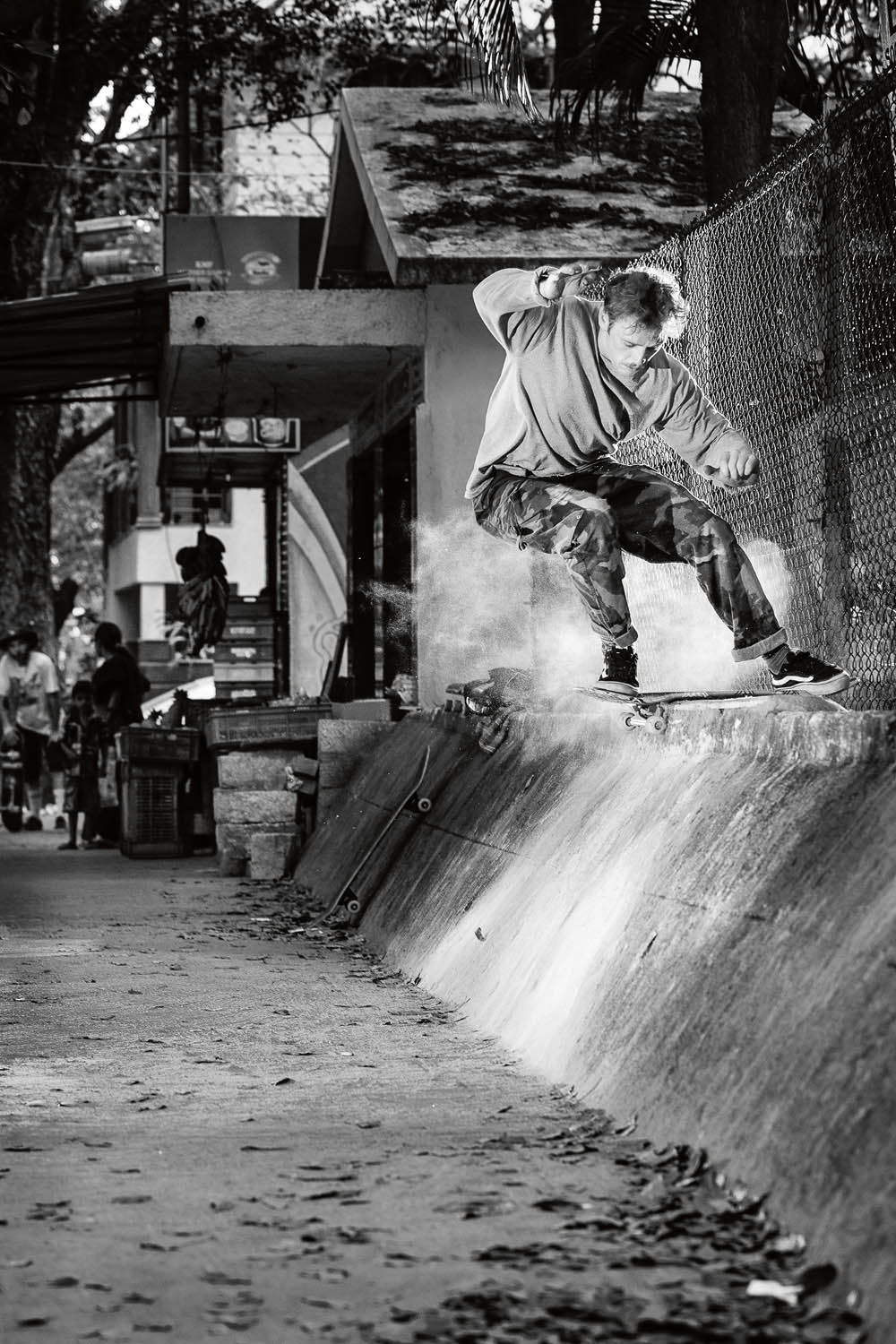 The Cuisine
When you tell people you’re going to India, the first thing that comes out of anyone’s mouth is ‘deli belly’ usually followed by a fart noise. Perhaps it’s because we stuck to the busy locals, where the food is prepared fresh and regularly and perhaps it’s because we spend so much time picking ourselves up from the dirt, that we have bombproof immune systems. So by some miracle, none of us got sick – none of us except Mikey, who got diarrhoea, from a KFC.
Matt: “Denis why are you wearing a beanie!? You’re in India!”
Denis: “Because it just goes with my outfit. Sometimes you gotta sacrifice comfort for style?”

Putting the Tea in Team
Munnar is as popular with honey-mooning couples as it is with holidaymakers escaping to the mountains from the sweltering cities. It is also home to the vast rolling tea plantations, which supply the world. It’s not ideal for skateboarding, but where is the adventure in that? Luckily we had Tony, our hotel manager turned spot-guide and getaway driver.
From the highest point in Munnar town, a Mosque, a Hindu temple and a Christian Church all face each other. A local told us: ‘The word Munnar means three rivers, and the three rivers symbolise the three faiths. In Munnar, all three faiths are equal, and exist in harmony.’
A thought as refreshing as the tea.

The School
“No School, No Skate!”
– Vineeth, teacher at SISP

Kovalam School is amazing! The work that Sebastian Indian Social Projects (S.I.S.P.) have done to promote learning and accelerate social change is insane, and what a way to do it! Joining forces with HolyStoked (Bangalore) and the 2er Crew (Germany) they have created a safe environment where parents are happy for boys and girls to play together (something sadly still frowned upon in much of India). Can you imagine if your school had turned its top floor and playground into a skatepark? The only thing you have to do to make use of it is go to school.
There are the heap of other factors that make Kovalam so incredible: constant warmth, idyllic beaches, great surf, fresh coconut water straight from the tree, hoards of 40+ divorcee cougars out to get their hands on you… I’m not joking; the place is crawling with them! 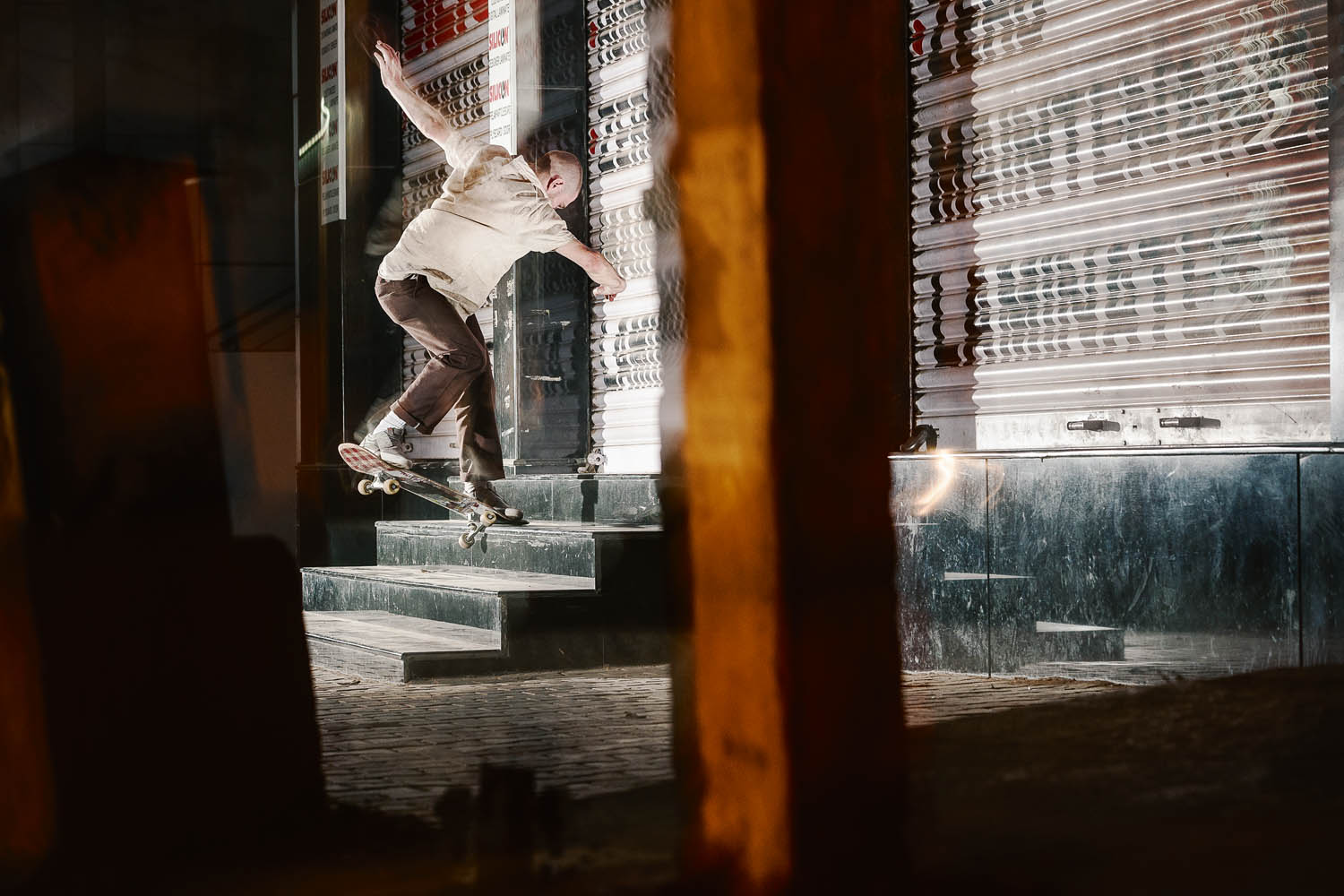 HolyStoked
“Nothing owes you nothing”
– Denis Lynn

Right now, DIY is hotter than a 50 Rupee Masala Dosa. For some however, if they want to skate, it’s essential. Since the ‘Make Life Skate Life’ park in Bangalore was shut down due to some horrible legal business, Shake and the rest of the HolyStoked Collective have made it their mission to provide space where they can not only skate, but where they can give lessons, build a skateboard hub, and show India that skateboarding is a positive force. So far they have secured an undercover spot with some wooden ramps in a metro station, and expansion to ‘The Cave’ skatepark in the suburbs continues.
If you’ve got to get it done, do it yourselves! 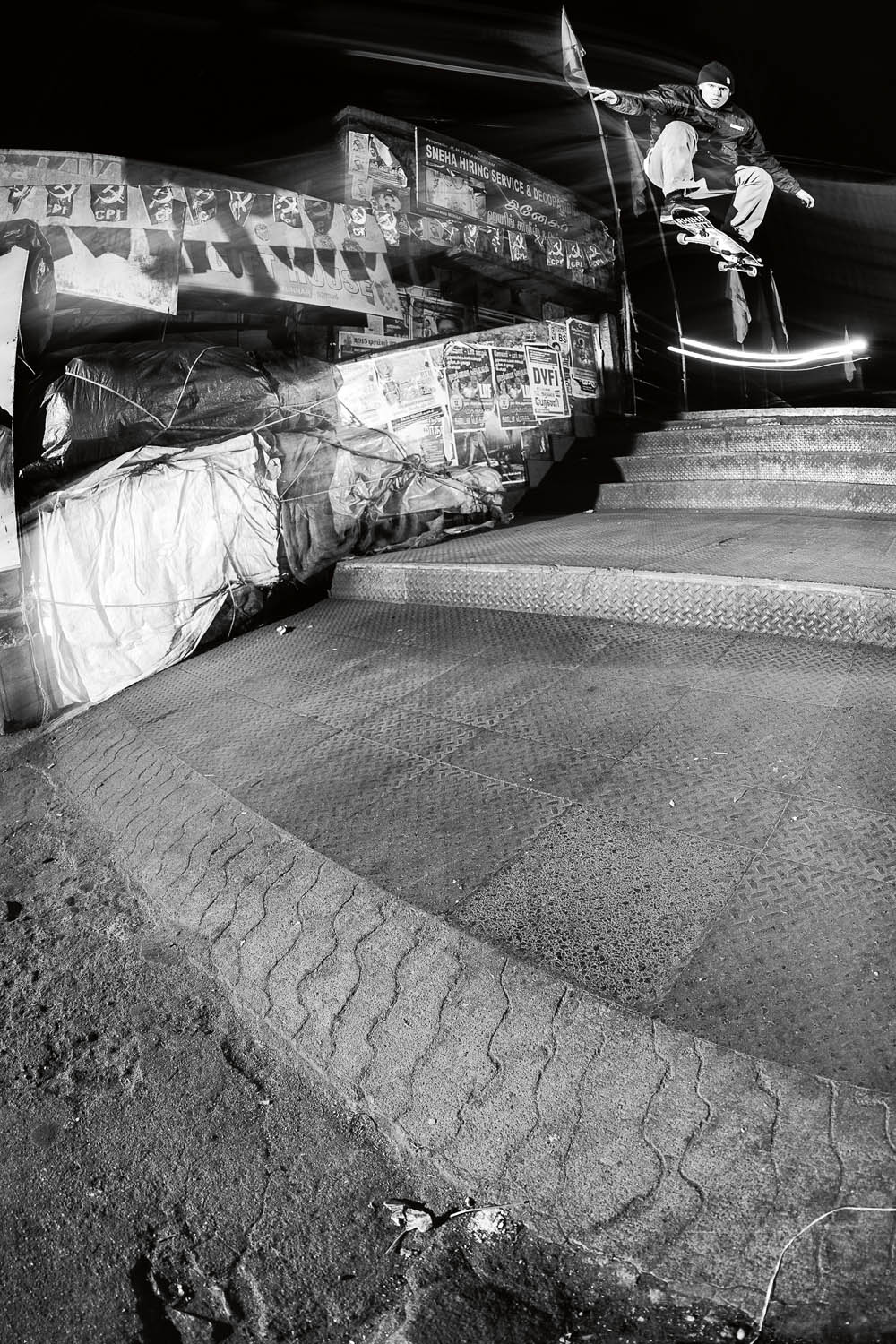