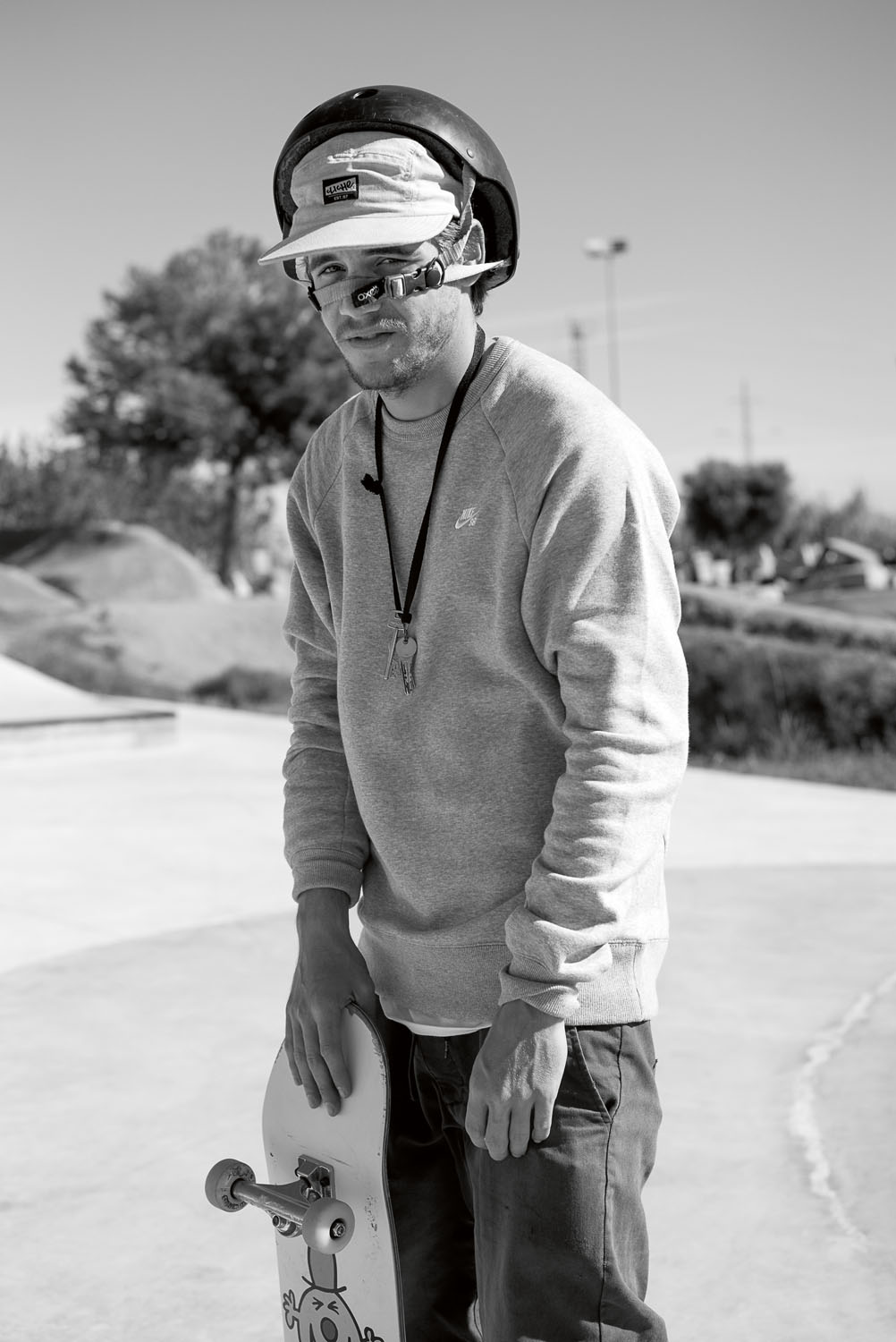 I think one of the things people enjoy the most about Maxime is that he truly doesn’t give a fuck. Ever. I’m sure you can kind of tell through his skating but it’s not until you meet him in person that you can really gauge the extent of it. It’s like everything you wish you could do or say if there was no such thing as consequences he won’t think about twice. Say someone pushing a wheelchair purposefully knocks you off your skateboard and you slam. What do you do? You might have a go at them as you skate off but usually that’s about it. What does Max do? He finds the nearest bar, gets a glass of ice-cold water and chucks it in that asshole’s face. Oh yeah and films the whole thing slow-mo on his phone for good measure. If you’re going to do it you might as well take the appropriate steps so you can relive it a few times I guess… Anyway, knowing that he applies that mentality to everything, including skateboarding, imagine how entertaining a cruise through Barcelona with him might be? Looking for spots with someone that impulsive is literally hilarious. That being said the best thing about this mind-set is still probably the effect it has on the tricks he’ll decide to try: “What, they’re going to close down Love? Okay get me on the first flight to Philly; I wanna try to switch tre the fountain gap.”

Did you have fun in Philly then?
Yeah definitely! I was out there with my good mate Bibo who used to live in Philly. He introduced me to everyone there a little while back so it was good to see them all again, especially with him. 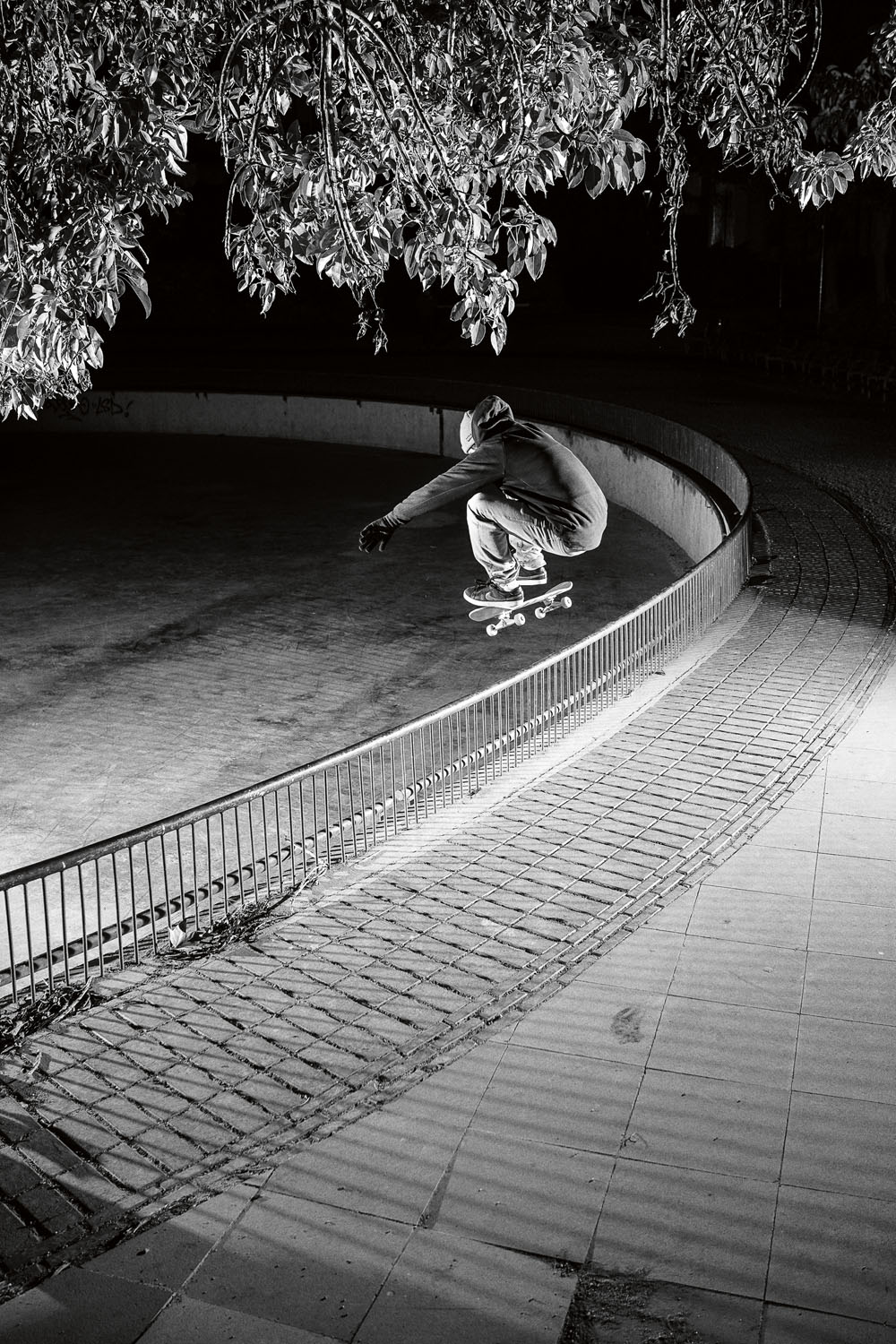 Did you actually manage to get any skating done?
It was tough but yeah we did. You can tell everyone out there is used to those winters. They’re motivated no matter what and that really helps you stay hyped. If we had that weather over here we definitely wouldn’t be skating as much, I can tell you that. At one point we tried going out when it was -9° Celsius…

That’s ridiculous.
The best is when it’s just snowed. As soon as they know it won’t snow again for a little while they’re all at Love Park clearing the whole place out, day and night until it’s skate-able again.

How long does it take?
About two days if they aren’t doing the bottom fountain bit… There’s usually Brian there the whole time keeping an eye on things, haha.

Panebianco? The Sabotage guy?
Yeah. He’s always the first one to arrive at the plaza and the last one to leave, skating no matter what. These days often with a soaked board… He’s the boss down there.

A soaked board?
Yeah completely soaked and full of salt. They absolutely cover the place in salt so that people don’t slip in the ice / snow and that shit gets all over your board. I’ve seen him come home and put his board in the sink to clean it with tap water, haha. But even beyond the fact that they’ll skate no matter how awful the weather is, just the way they go about doing stuff even though they have full time jobs is rad. It’s like they’re never tired. They’ll go to work every day and do long hours but it won’t seem to affect them at all. 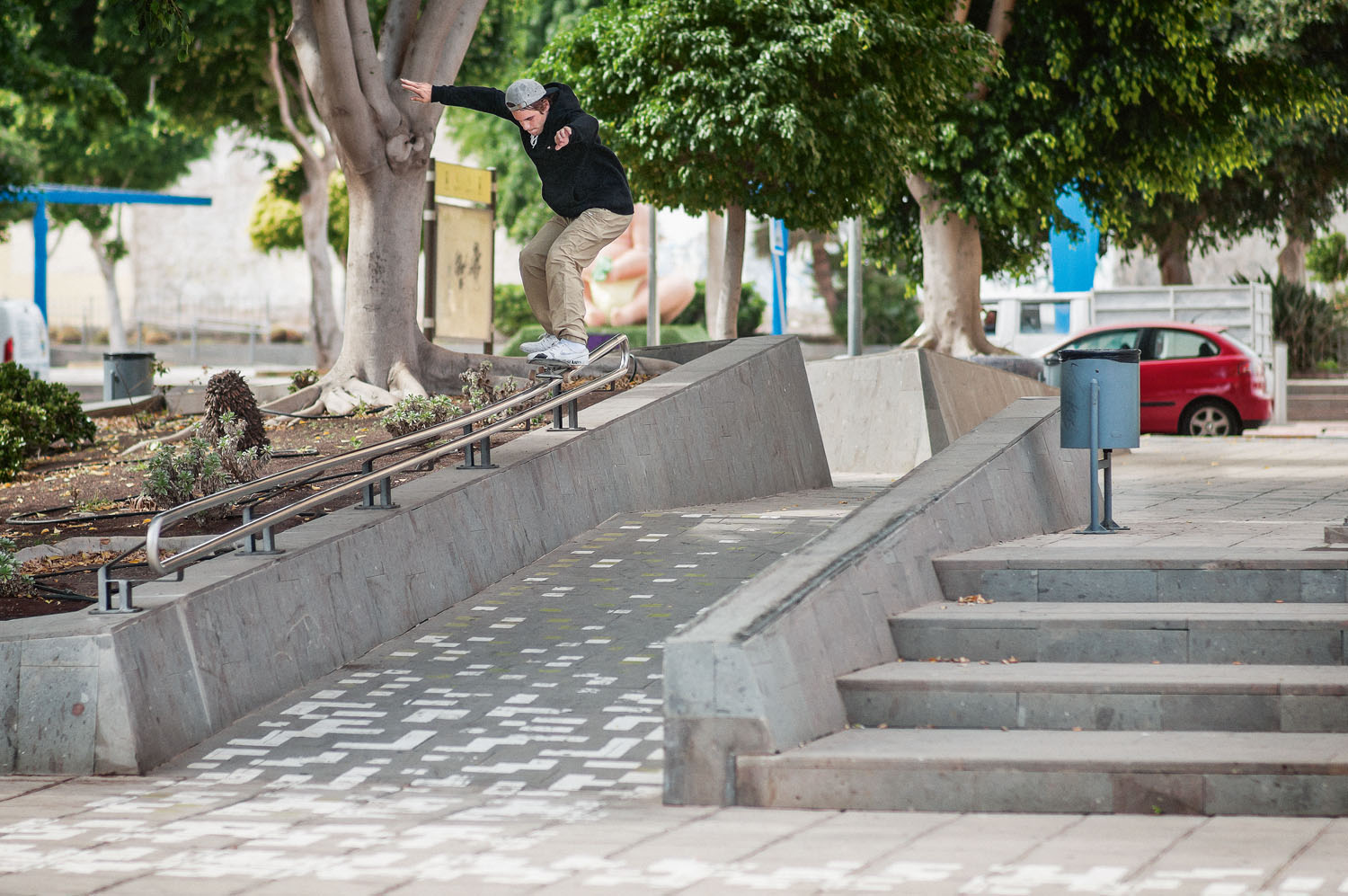 Did you get a chance to try the switch tre then or was the weather just too shit?
Yeah on the second day or something. It was like eight degrees outside so decided to give it a shot. I think I did about ten tries or something but didn’t land it. You can’t really do more because your legs start to seize up after that. I was intending to do a few tries as often as possible throughout my stay but the weather conditions rapidly deteriorated and made it impossible for me to do any more.

Yeah you just can’t try something like that if it’s minus nine outside…
Exactly. Plus there are quite a lot of factors that need to be taken into account when you skate that thing. Getting the right speed for instance is really difficult.

I bet you weren’t the only one in town to get the last tricks in before they shut the place down.
Yeah definitely. That Yoshi Tanenbaum guy tried to big flip it… We stuck around and watched; it was crazy. 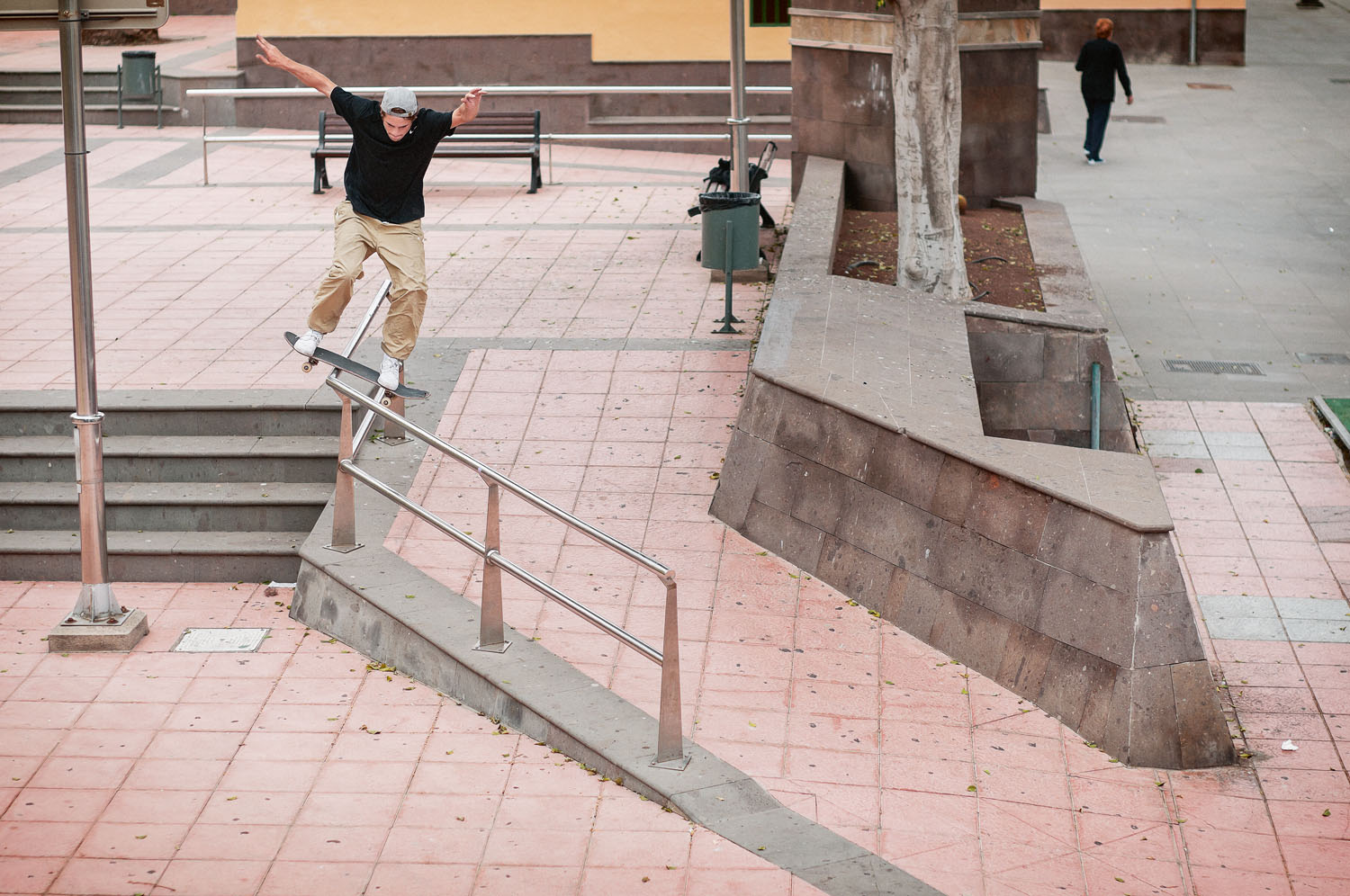 Do people always clear it? I can imagine some people destroying themselves on the last step…
Nah usually everyone clears it. It’s the sort of spot where if you aren’t completely certain you are going to clear it then you just don’t go for it.

Were you out skating much out there aside from that or was it mainly just trying then resting / waiting until you could try again?
No I actually still managed to get a fair bit of other stuff out there.

And is it completely done now or can people still skate there for a little longer?
Apparently they are supposed to properly close it to the public on the 15th (of February) so I’m thinking of heading back next week in case there’s one last opportunity for me to try it.

Sick. That means that by the time people read this you might have given it another try… Would you ever consider moving out there?
Hmm. I love the place, the people, being able to randomly turn on the radio and it’s a song you’d be searching on YouTube for, but I don’t know… I really enjoy going on short trips out there but I think as a place to live it would be a bit much. You really feel like you don’t have as much freedom in the States. Nothing really goes on out in the streets. For instance, if you want to drink a beer it’s either at home or in a bar. Chilling in the streets is not an option, ever. 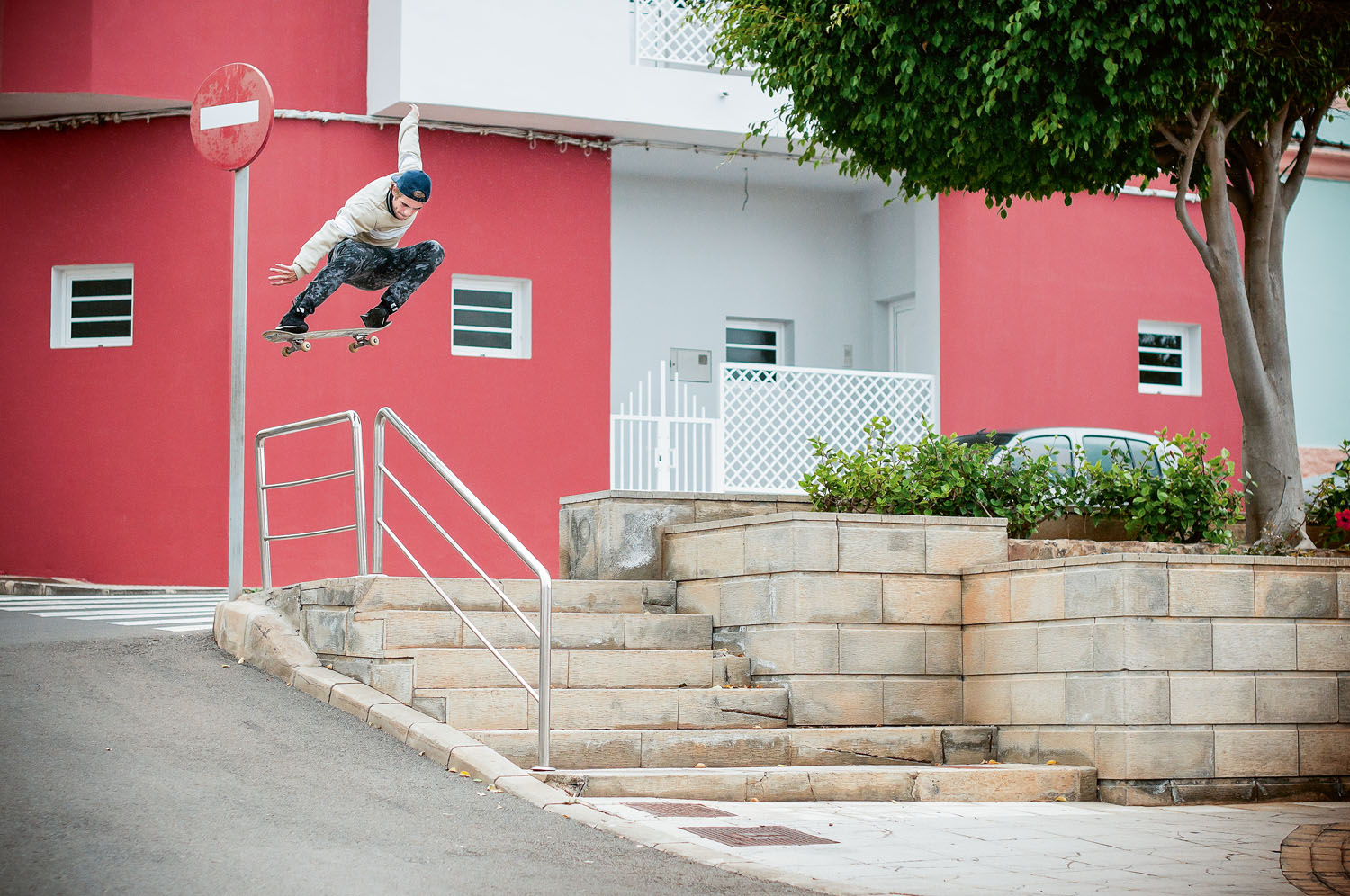 It’s definitely a very different lifestyle. Had you done much Google Earth spot searching before you went out there?
Ha. Everyone knows how much I love that shit now. I didn’t do it so much out there but I do it LOADS here in Barca.

Why are you grinning like that?
Because it’s too fucking sick, haha. I tend to get super carried away with it as soon as I start. Like when we were in the Canary Islands with Nikwen and Bibo (some of the shots are in this article), I’d spent so much time on my computer searching for spots like a maniac that I ended up showing the locals loads of stuff they’d never skated before.

The only thing that sucks is when you drag everyone to a spot and realise that you couldn’t tell from the photo that the ground was actually gravel or something.
I mean yeah every now and then something like that happens but generally it works out. Especially in such a vast city like Barca, there’s so much shit to explore. 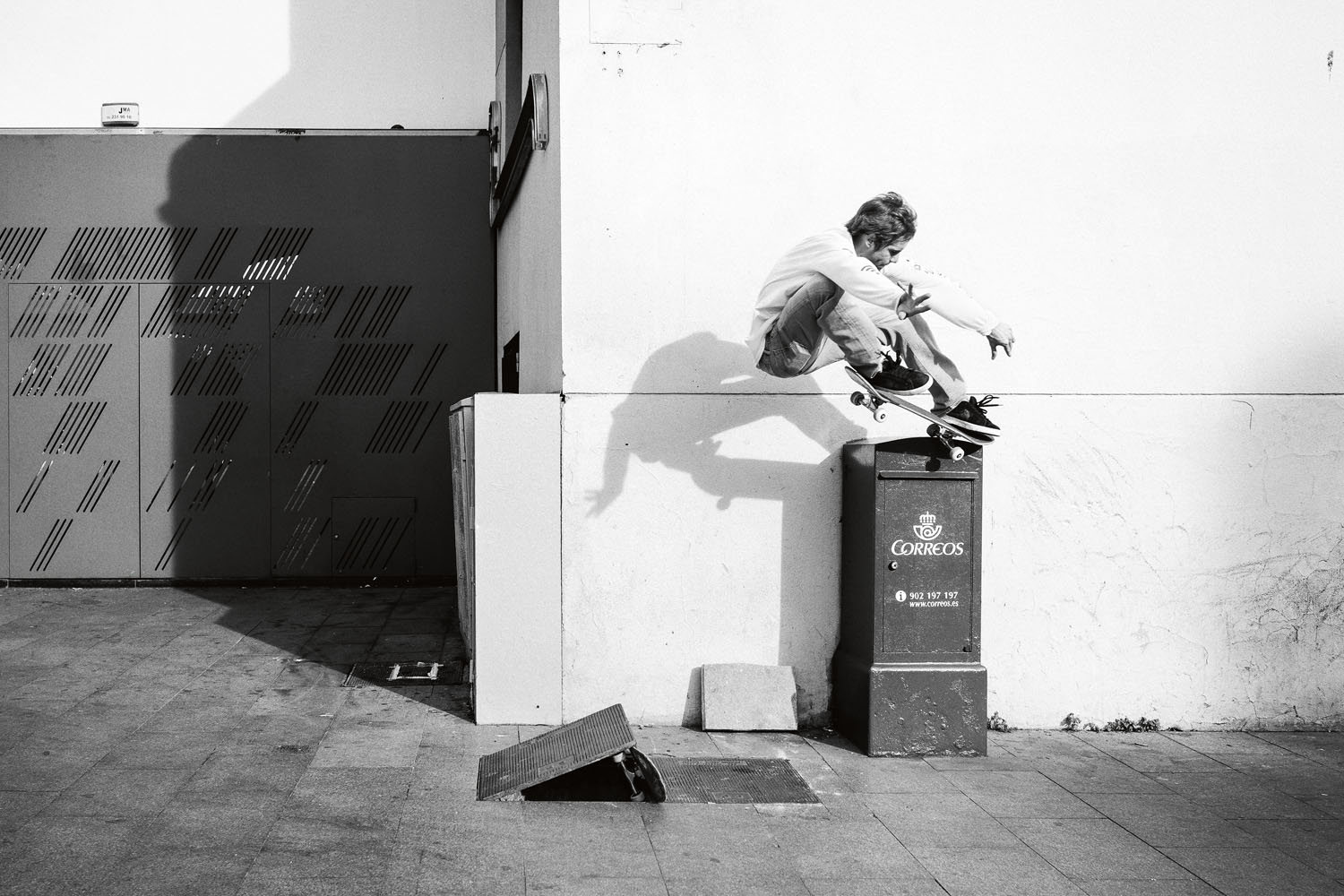 Especially if you’re as hyped as you are on filming people and making edits for Instagram. It’s sick that every time you go out with the younger guys you push them to film stuff. I love seeing footage of Antoine (Volle) or Sixsas (check out the @freewifi insta if you’ve never heard of him) on @gronze.
Yeah, I mean I’ve always been into that. I’ve always enjoyed filming and making edits and always will. Plus Instagram keeps the sponsors happy, haha.

What kind of condition would you say your body is at the moment? I don’t think I’ve ever heard you say you were completely fine.
I’d say I’m at about 50%. I’ve got a sprained ankle. Seems to be where I stand most of the time to be honest… Every time I think I’m going to have time to rest up and really repair my body I get asked to do something else. It’s never ending.

And I suppose you haven’t done what you were telling me about last time: taking a few days off skating after each session to let your body repair itself and get your motivation back to the max.
No! I keep wanting to but it’s way easier said than done. To be fair I do take reasonably good care of my body compared to some. I’m regularly going to doctors, getting X-rays, etc. Spending time with Americans really reminds you how good we’ve got it with our free healthcare system. 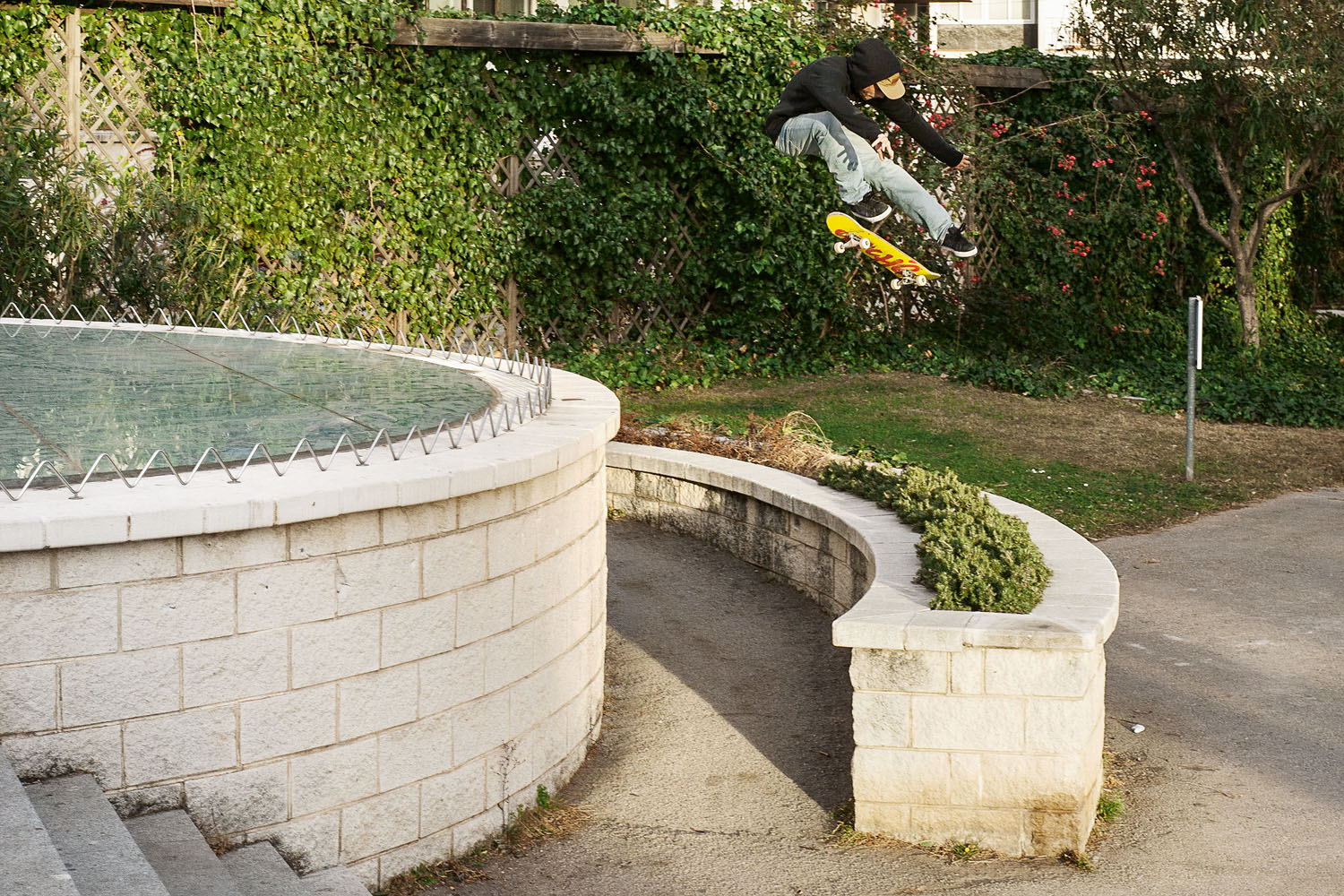 Have you tried those crazy electrodes you splashed out on yet?
Yeah I have but I don’t really know if they really worked to be honest. I think I need to ask a specialist for some advice on how to properly do it before I continue doing it to myself. Although I could try them out on some guinea pigs and learn like that. Luypa (Sin) told me he was down, haha!

Definitely don’t try those on Luypa, haha; what he needs is some proper rest. What have you got going on when you get back from Philly?
I’ve been working on a part for Thrasher so I really need to finish that.

Sick I can’t wait to see it! Good luck in Philly and I’ll see you when you get back. 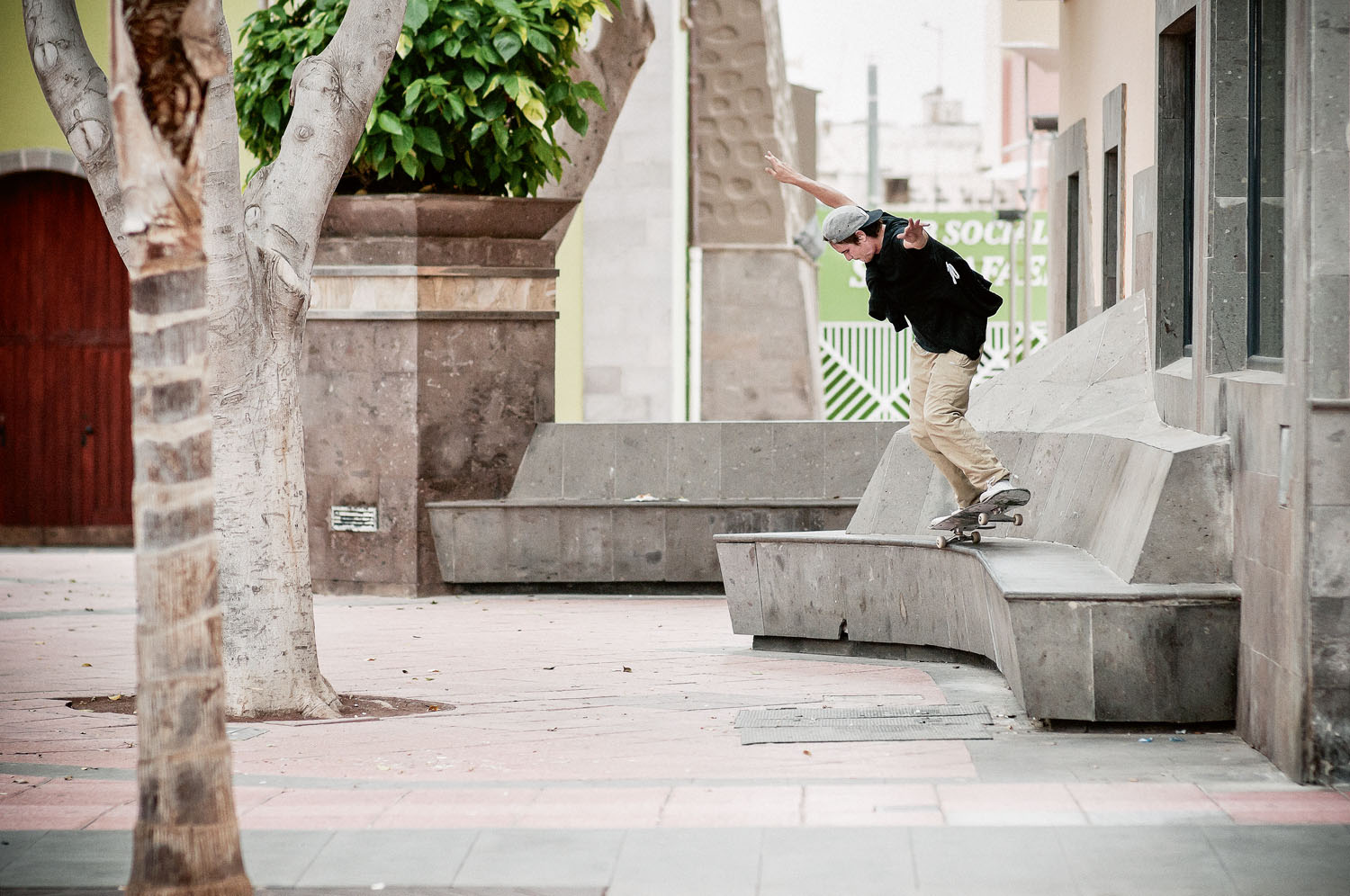