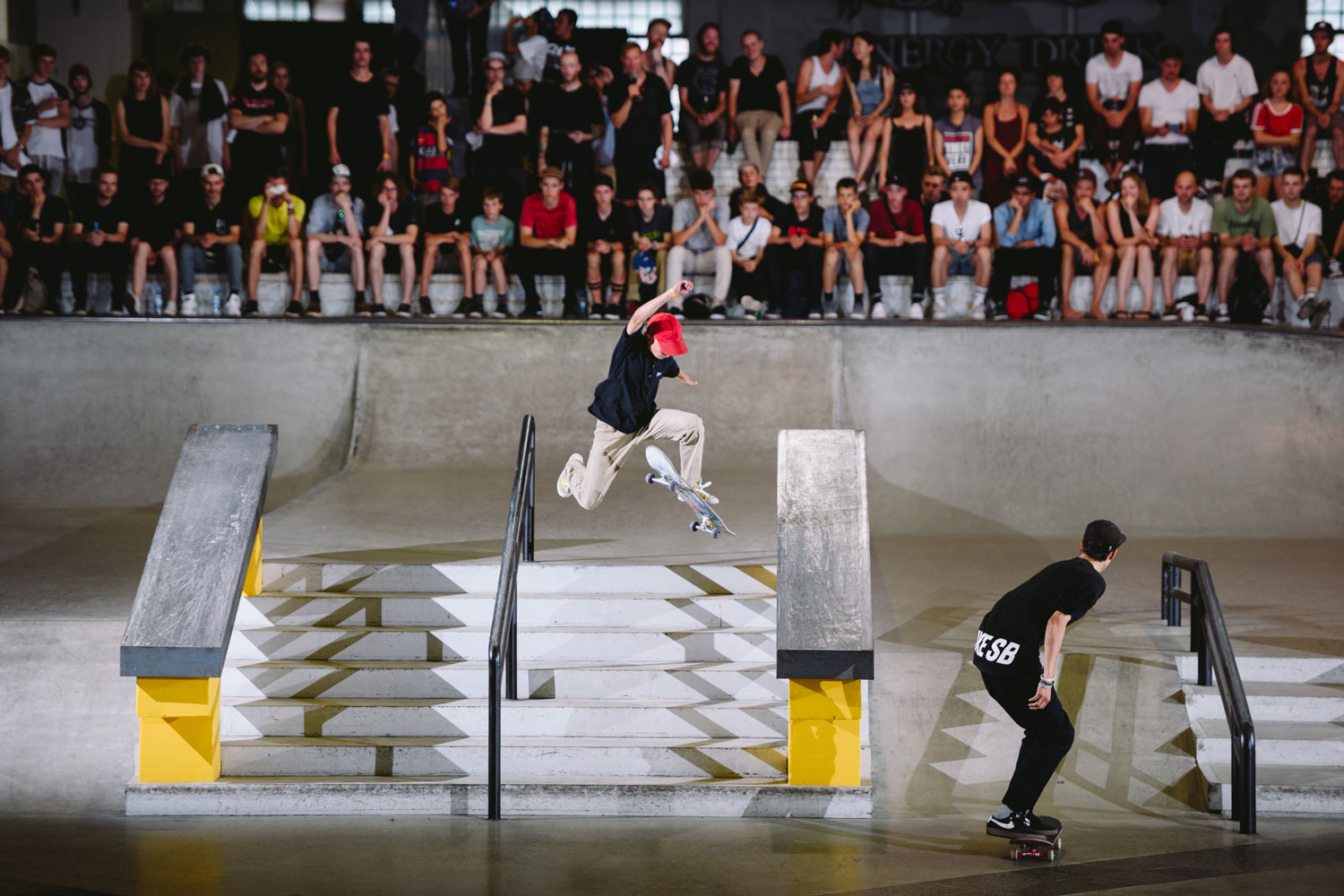 So this past weekend saw the final comp in the 2016 Nike SB Euro series go down in Berlin. The Berlin Open differs from the Barcelona, London and Paris Am comps because in the Berlin Open, Pros can enter. Karsten Kleppan, Denny Pham, Nisse Ingermarsson, Neverton Casella and others were on hand and they sweated it out with the top Ams from around the world. But what I mainly took from this contest is a feeling of the emergence of the youth. Thirteen year-old ripper Herman Moeller is definitely one to watch, you’ll be hearing more and more about this kid soon enough. Speaking of Herman’s, Hermann Stene dislocated his shoulder trying a triple kickflip in his run in the finals. The comp was paused, people gazed, but then the paramedics helped put Hermann’s shoulder back into place. Hermann gave the thumbs up letting everyone know that he wanted to continue his run and 15 seconds later he backside nosebluntslid the big hubba! What a ledge… 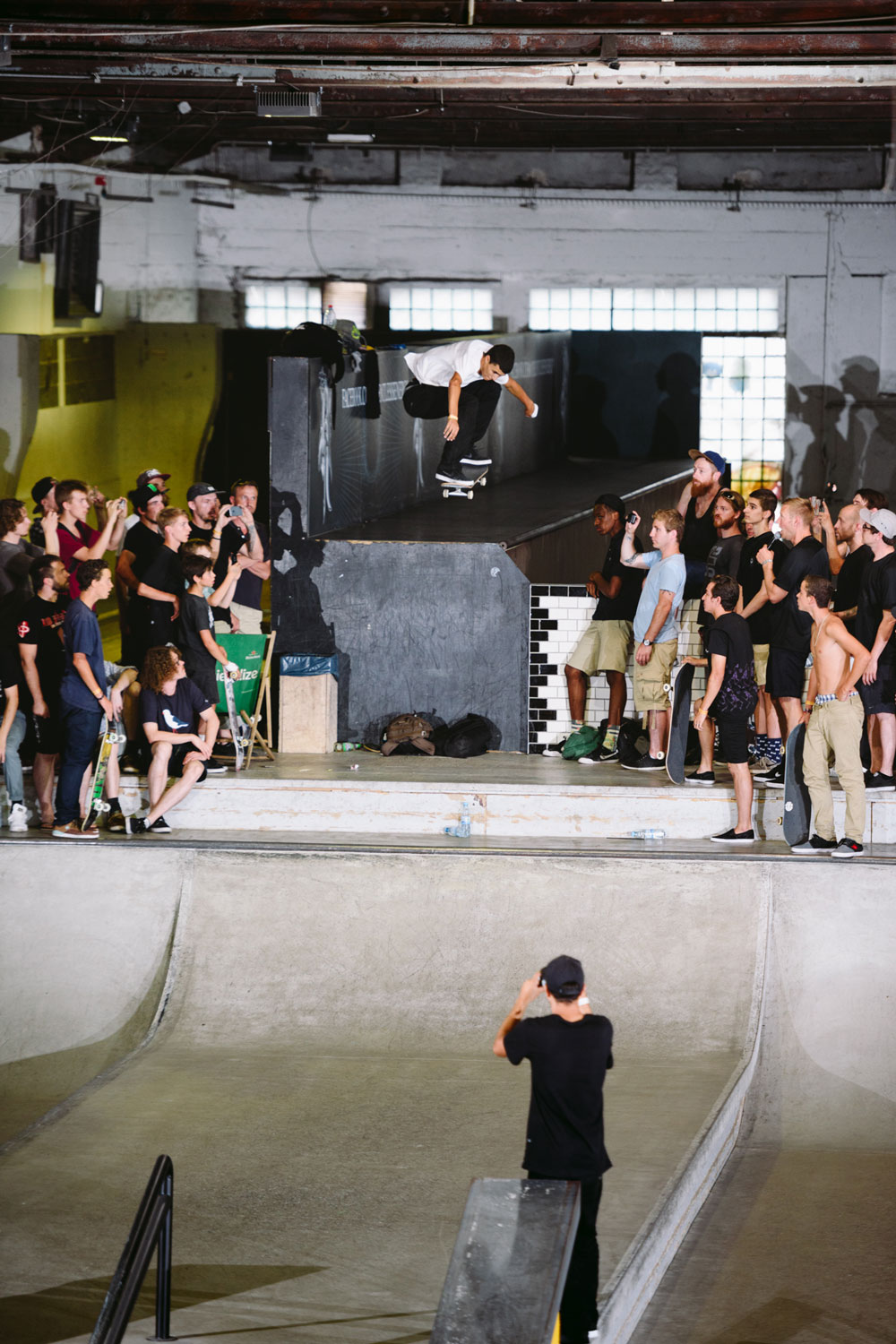 The top two places, first – Ivan Monteiro from Brazil, and second – Gustavo Ribeiro from Portugal, are aged 17 and 15 respectively. The youth are really shining through; it seemed like Ivan and Gustavo just couldn’t miss. Ivan even broke his hand in the finals but skated on.

In 3rd place, another young buck, Vincent Milou, broke his ankle in the middle of his super finals run. Whilst lying there on the ground, surrounded by paramedics and friends concerned about his welfare, Vincent exclaimed: “Did I win?” Not quite Vincent, but third place is not too shabby. 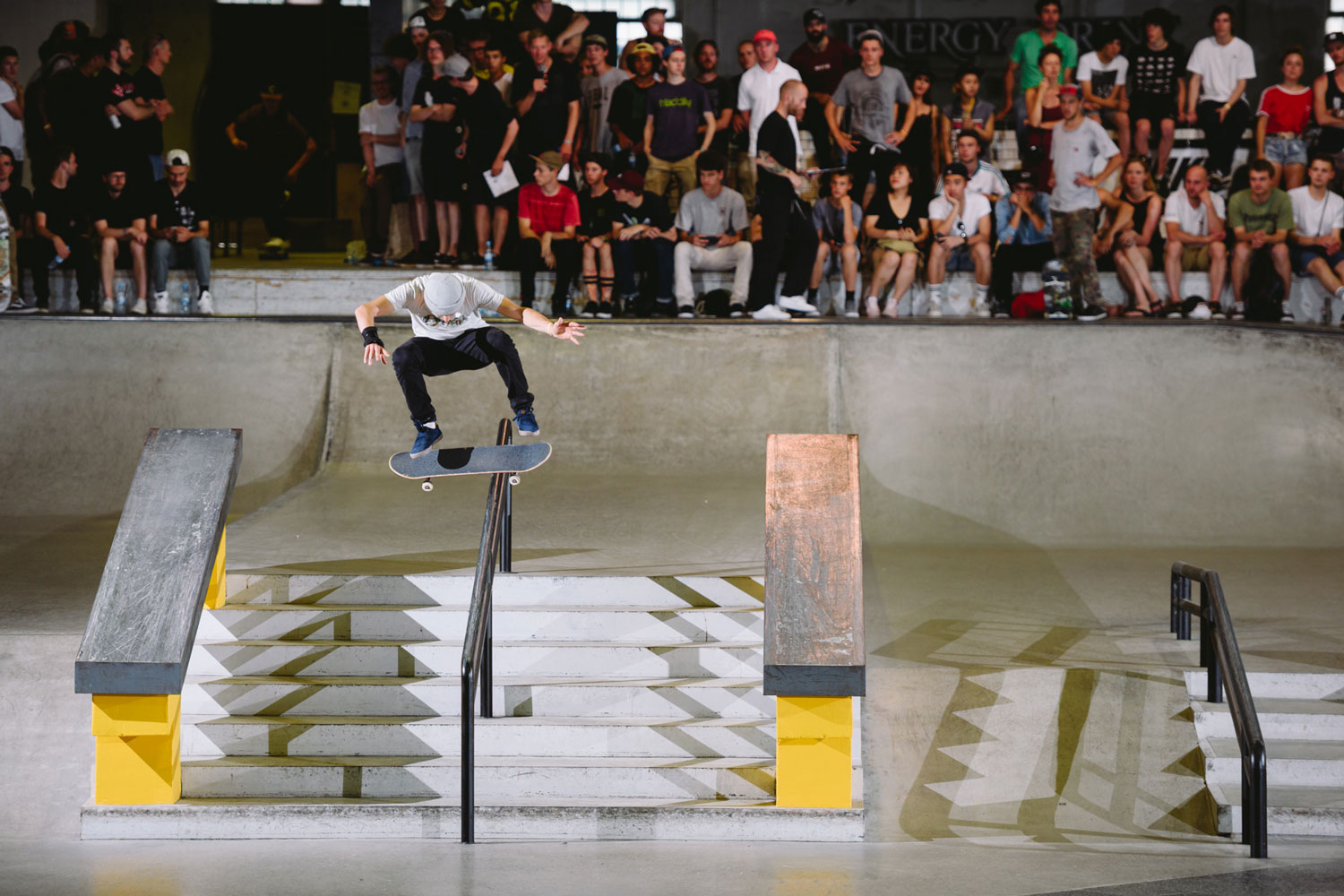 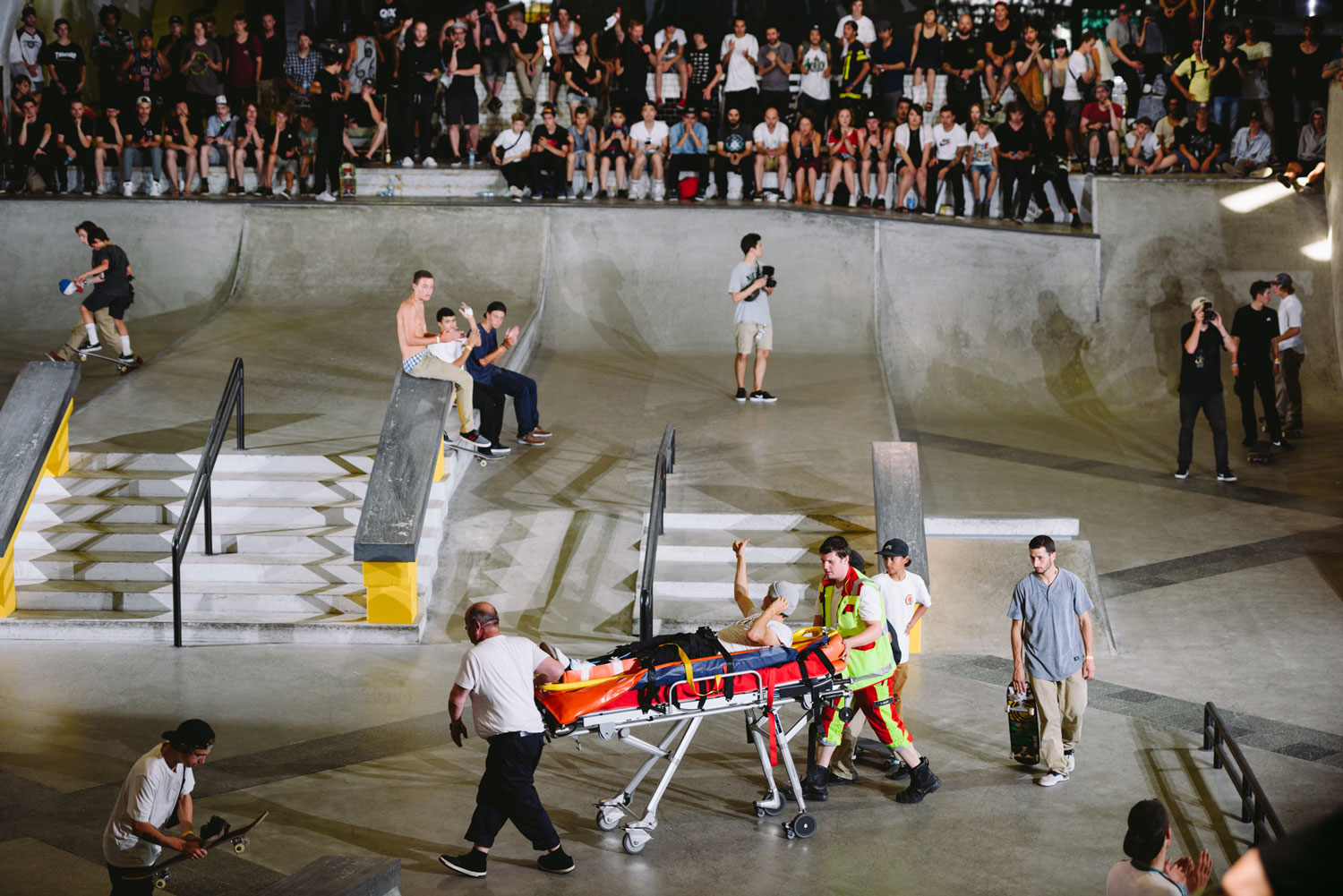 And moments later: Vincent wheeled out on a stretcher. Ph. Maksim Kalanep

Without listing them all I’ll say quite a lot of tricks went down: backside noseblunt slides, every hardflip variation, tre flips, kf front boards, nollie flips, nollie heel noseslides, etc… The level of difficulty has definitely risen, but you can judge for yourself by watching the official edit when it drops in a few days. Max Kruglov flew all the way from Russia to take the best trick honors with a hardflip backside noseblunt down the big hubba. 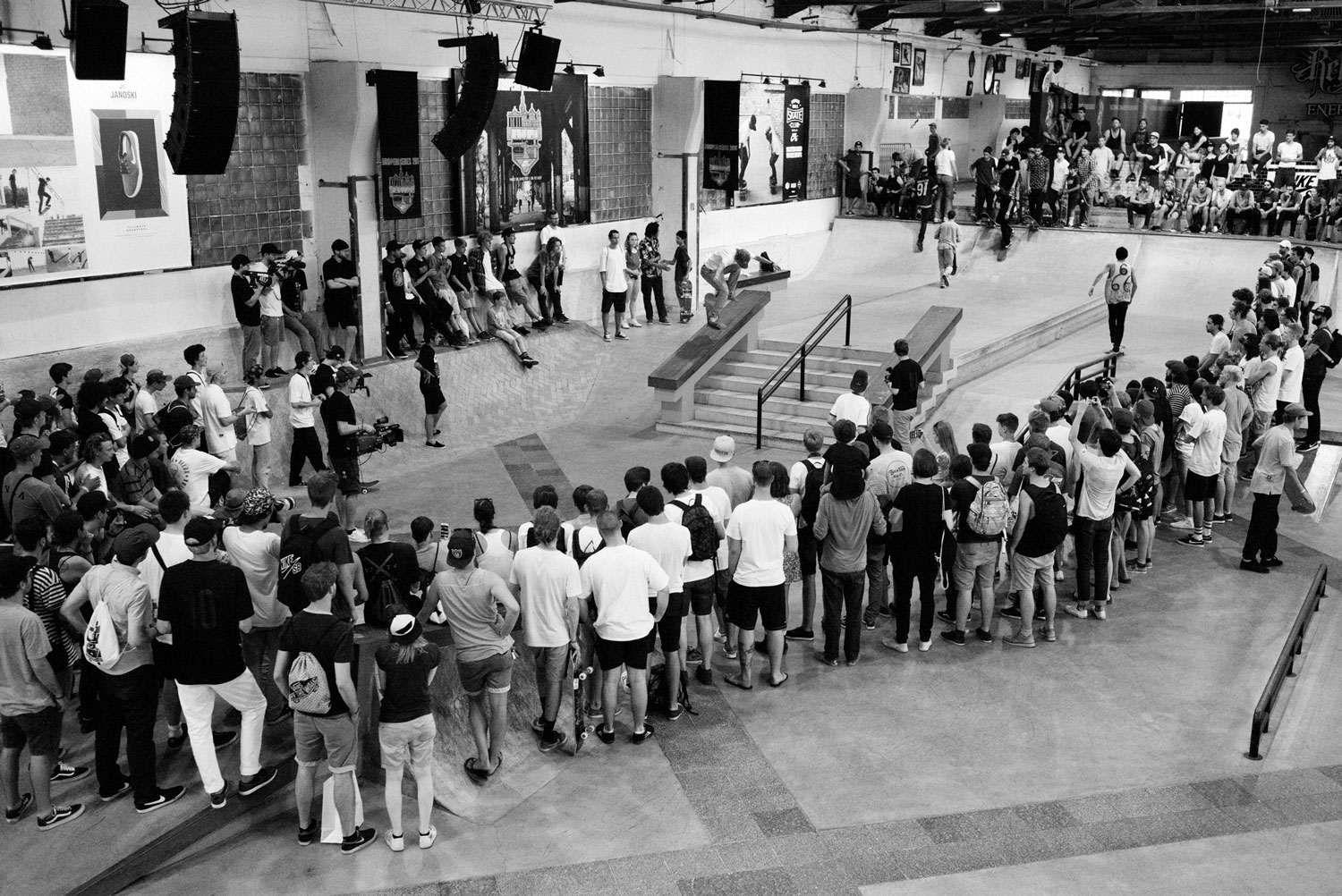 Another thing I noticed this past weekend is that there is somehow a direct correlation between half cab noseslide 270s out and energy drink sponsors. There’s something there, I just can’t put my finger on it… 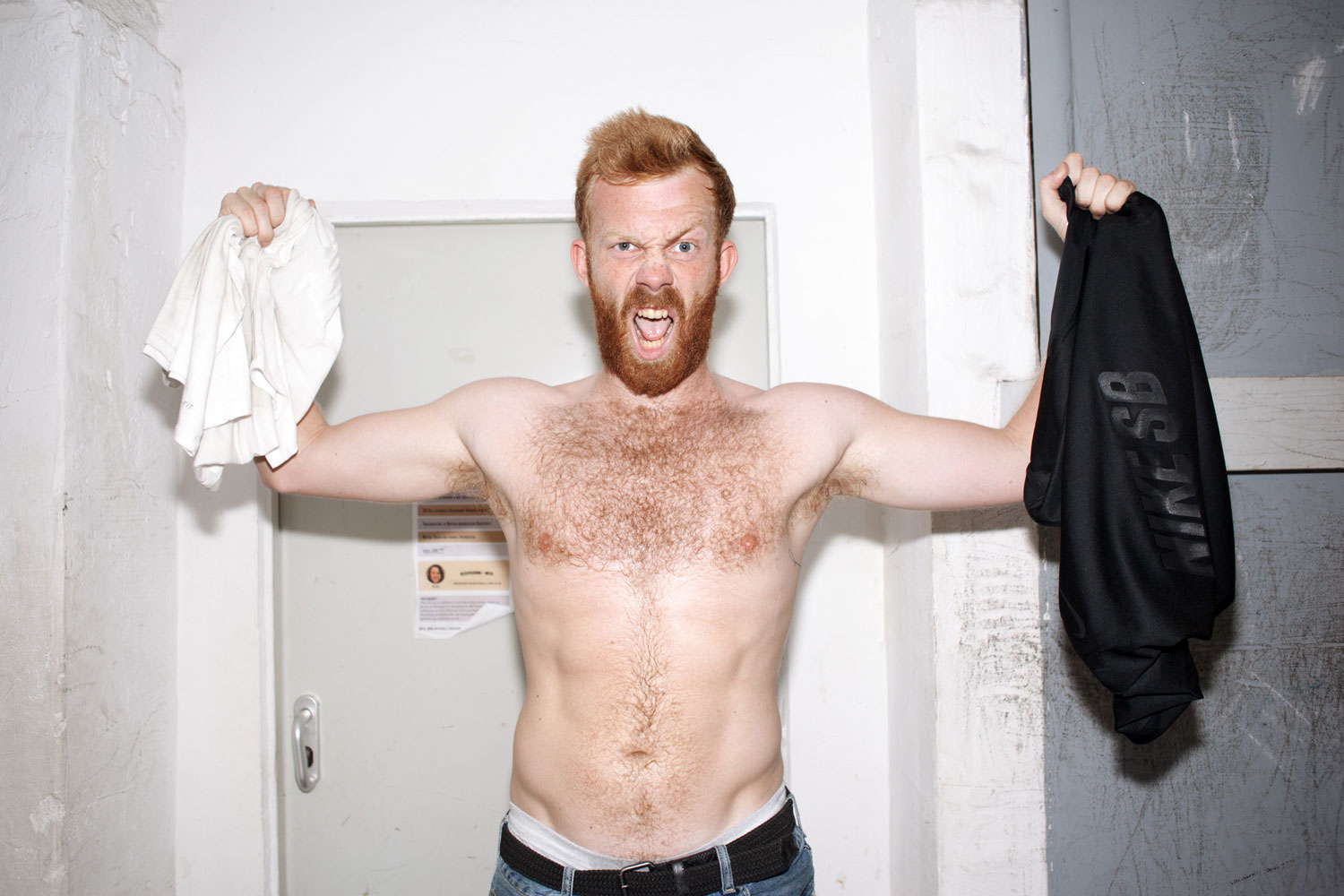 Also this past weekend saw a lot of injuries, but that’s what happens I guess when skaters give it their all. But one of my favourite things about the weekend was seeing how each skater took to the course. Some locals had perfect lines planned out, some guys did a repeat of last year’s runs, and then some guys just improvised as they went along, like Hugo Boserup. Watching Hugo glide around the course was truly a pleasure, and I can’t wait to see him ripping again in Copenhagen. Basically, as you know, everyone skates in their own unique way; it was just nice to see so many styles and techniques all in one place. 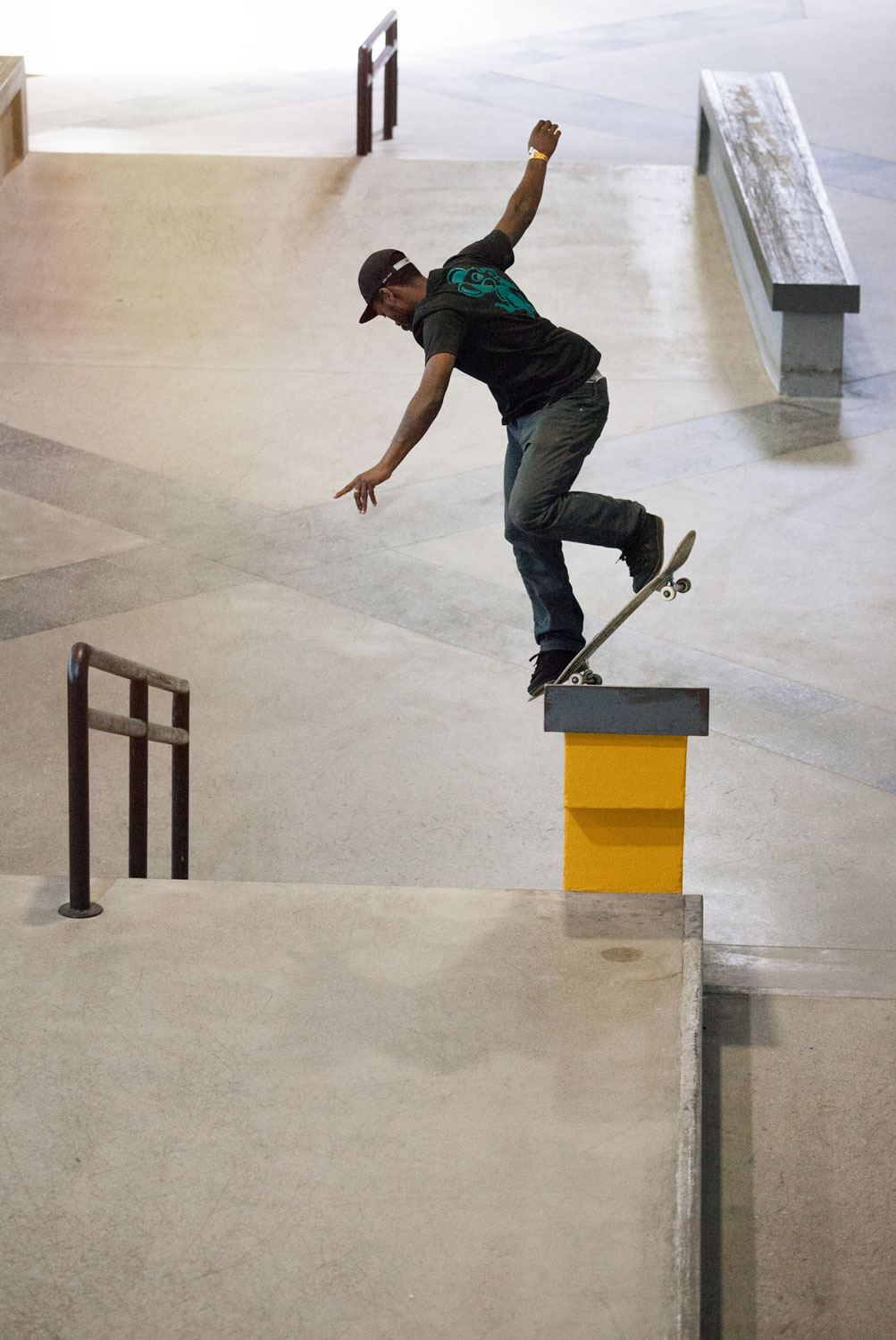 Thanks to Nike SB, William, Keld, the CPH crew, Mathieu, Danijel and everyone else that helped organise the event. See you next year! 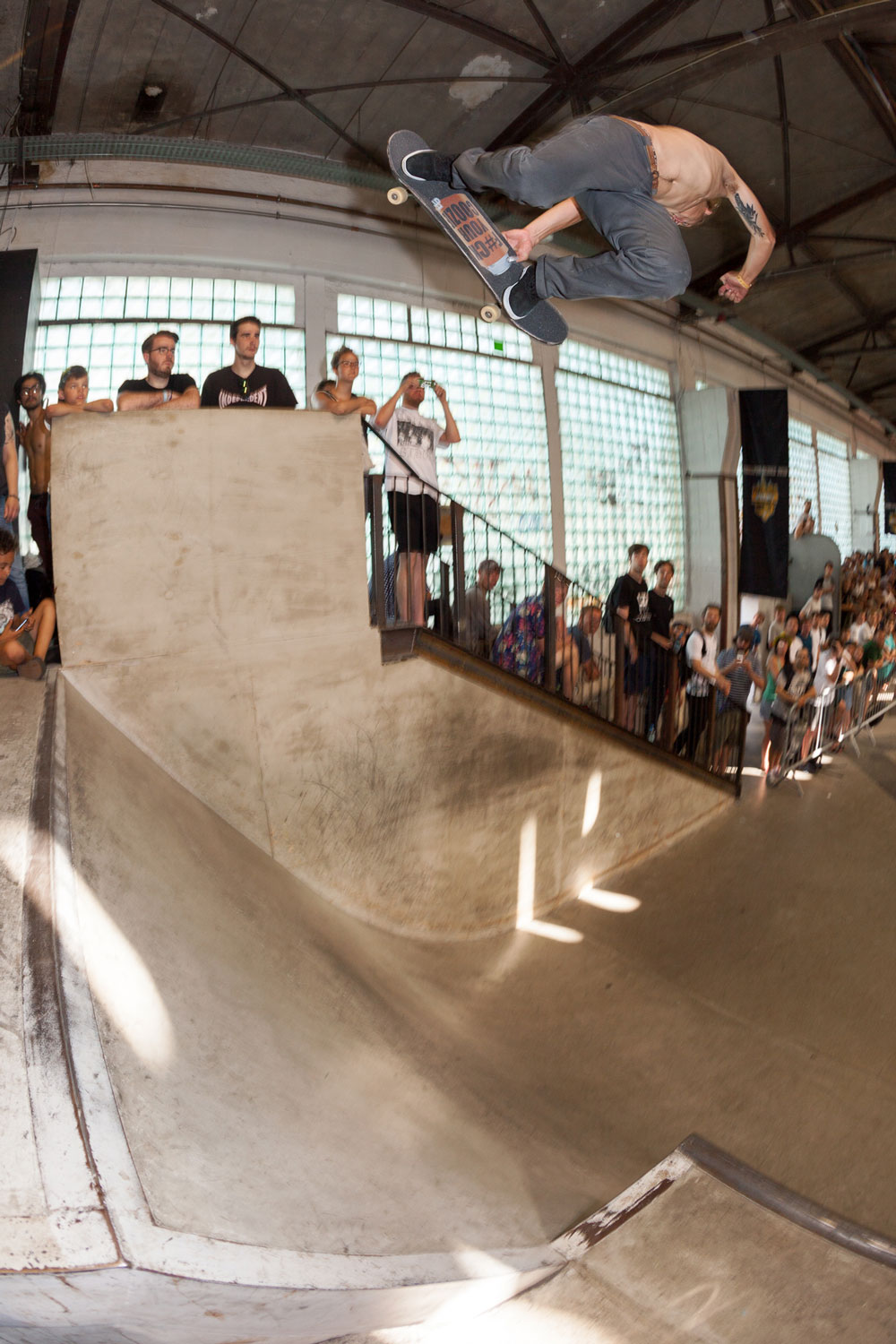