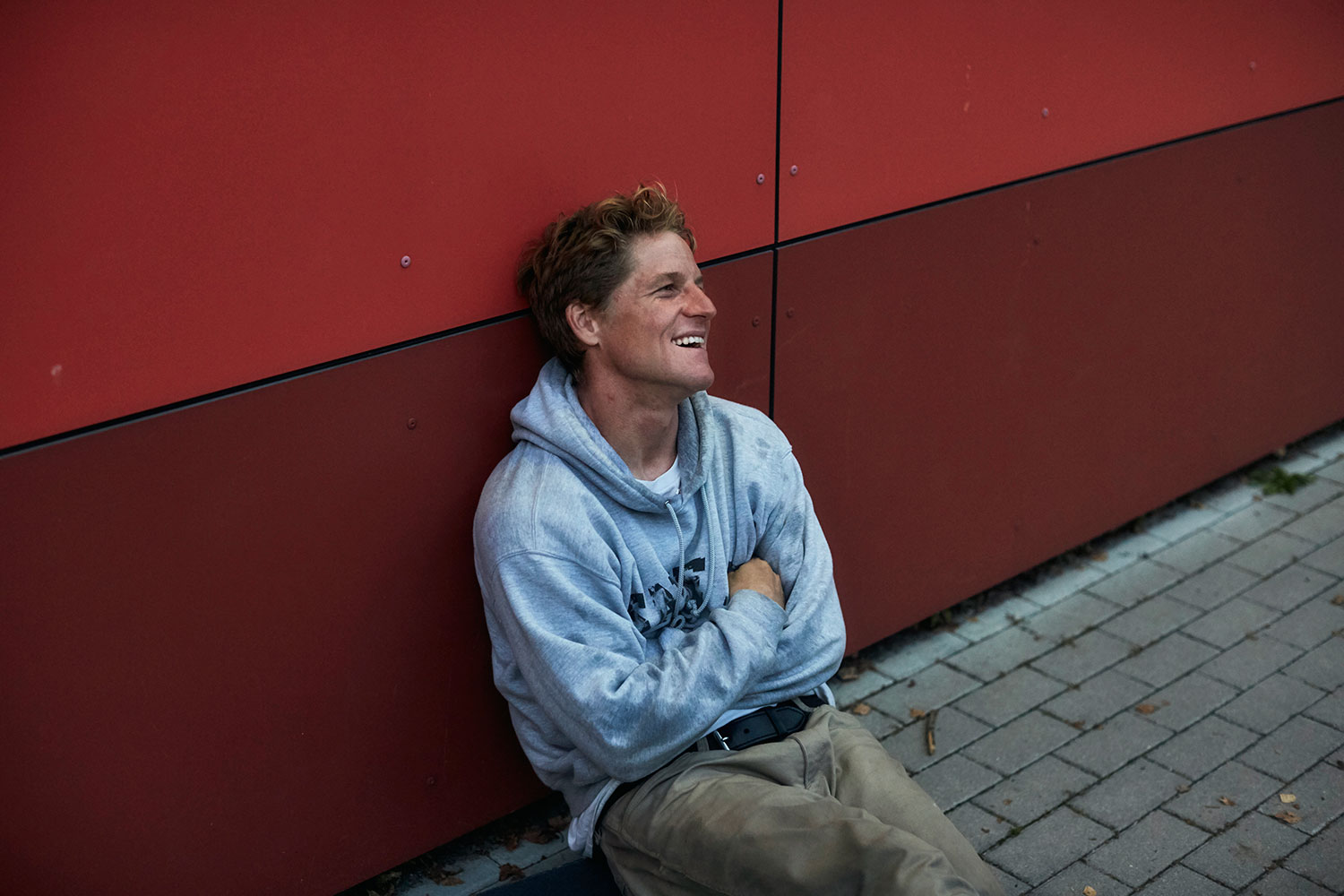 Dennis Busenitz started skating in Germany and moved to the States when he was 15. So it made perfect sense to celebrate ten years of Dennis on adidas in the place where Dennis spent his first ten years of skating: Munich. The kind folks at adidas skateboarding flew us over to Munich last weekend to hang out with Mr. Busenitz, eat pretzels, schnitzel, drink beer, celebrate and basically have a good time. Luckily I got to talk to Dennis before things got too messy…

So 10 years on adidas, congrats! Had you ever skated adidas before you got on the team?
Dennis Busenitz: Yeah I’m sure at some point. I had adidas as a kid and stuff. I skated in them for sure and I probably got in trouble for it because they’re like nice shoes. (Laughs)

And when you got on the team in 2006, do you remember what was your first pair you skated in?
I don’t know what they were called, but they were like high-top shoes. They were the ones that Gonz drew all over. They were like light blue and white; I think with a little rubber toe. (Editor’s note: We think they were these here) It was a skate shoe and I remember I went up to Portland to visit those guys and they gave me a pair of those and I skated them at Burnside and they were nice. But then after that I liked the Dakota shoe; I skated that one a whole bunch. It’s like a boxing shoe or something.

So did you have any of these first shoes you skated in mind when you designed your first Busenitz pro shoe?
When they gave me a shoe it was just that I wanted to make the Copa Mundial soccer shoe and I had never skated anything like that until they made it ‘cause Copa Mundial has cleats on it and you can’t skate in it.

Ah I see. So you grew up here in Munich. You started skating here as a kid?
Yeah I started skating here. A neighbourhood kid had a board and we had like boards from our older brothers, like the banana boards and things like that, and this neighbourhood kid could ollie up a curb – so that tripped us out. And then I just kinda had to figure out how to do that and I just kept going from there. It’s a pretty standard story. 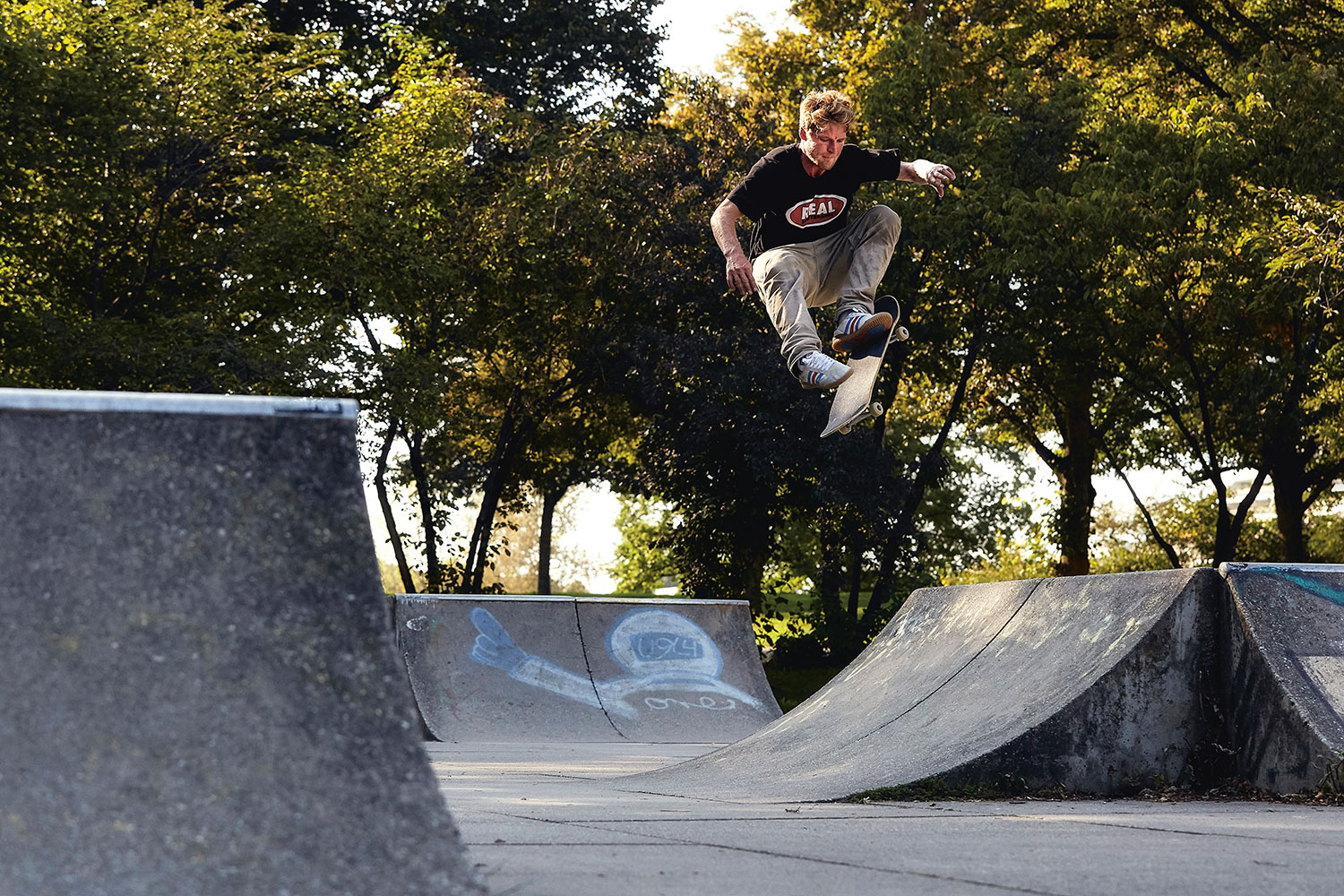 And so you moved to Kansas from here?
Yeah a long time after that. I was like five or six when I learned to ollie up a curb.

That’s young!
Yeah but my brothers were older like ten (years old). They knew more of like what was going on. So it was a good ten years before I moved to Kansas. I moved to Kansas at 15 so I was already really into skating.

So do you remember the first time you came back here (to Munich) from when you moved away?
Yeah I came here in 2001 or 2002 on an Emerica trip. It was just like a Euro trip and then my sister got married here so I came back for that.

So you still had family that lived here?
Yeah my sister lived here, but she met a Greek dude while we lived here and then she married him and then stayed here when we all moved to Kansas. Then after they were married they moved to Greece, that’s where they are at now.

Especially now that Trump is going to be President, have you ever thought of moving back? Did this thought cross your mind last week?
Yeah it definitely crossed my mind last week, but it probably did for everybody. (Laughs) But even before that we talked about it and stuff, but it’s just not that casual with two kids to do it. My wife doesn’t speak German so that makes it all very difficult and it’s cold here too in the wintertime and I don’t think we’d fair that well. Every time we come to visit in the summertime it always seems really cool and it seems like a great idea, but when I really think about it and put on my ‘adult hat’ and think about it responsibly it’s like ‘nah, it’s not really a good idea’. But maybe last week that changed, maybe now it is a good idea.

Yeah who knows? Scary times ahead.
When homie’s got nuclear bombs you are not really safe anywhere. ‘Sorry world! I voted for her!’ It’s fucking crazy. 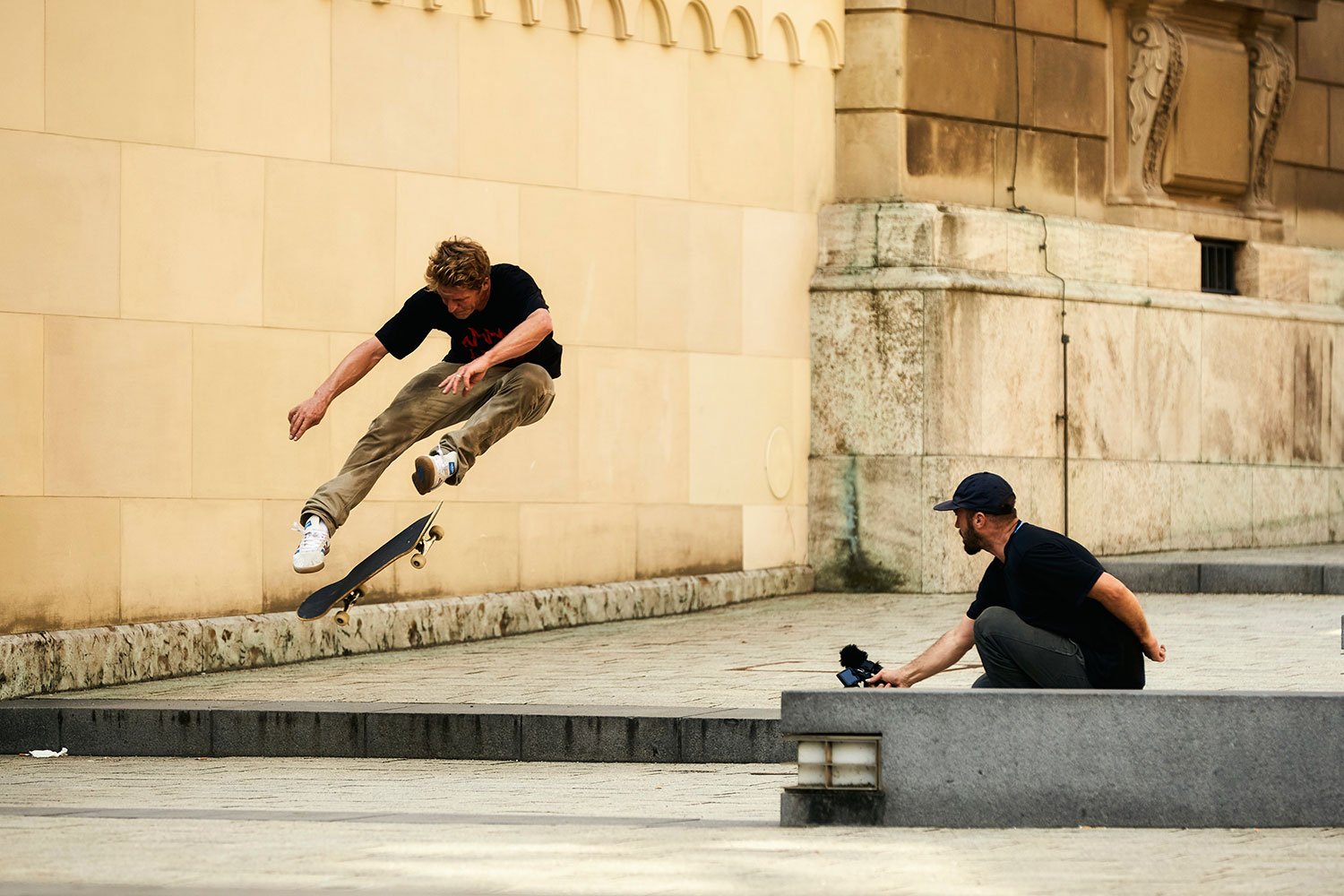 Ok let’s change the depressing subject… Do you think skateboarding in Europe is different than how it is in the States?
Probably not so much anymore. It seems like it’s a global skate community. You do a kickflip now and put it on Instagram and the whole world knows it and so everybody’s on the same page now more or less. I don’t know it doesn’t seem that different anymore… It’s definitely not what it used to be.

Yeah it was different before social media…
It seems like (people in) Europe used to always look through the mags to see what to do and things and now it seems like they have their own original shit. They are just skating in Europe and…

Not trying to imitate as much…
Yeah. Maybe that’s just my take on it. They (Europeans) have kind of learned what wealth of spots they have and have started to use them to their advantage.

So what’s a typical day for you back home?
I live in Sebastopol now, so I guess just wake up, make coffee, take the kids to school, come back home and then try to skate. Then pick up the kids and hang out – nothing crazy really.

So you don’t have to drive into the city (San Francisco) every day?
No, it would be fucking crazy to drive that much every day. I have like my own shit to skate, so I mess around with that.

Oh yeah you have stuff you built at your house!
Yeah. I usually just try to chill. I’m not at home that much really so I try to make it as boring as possible. I play in the garden, build stupid shit, um… Normal shit I don’t know… Look at my phone too much like everybody else in the world! (Laughs) 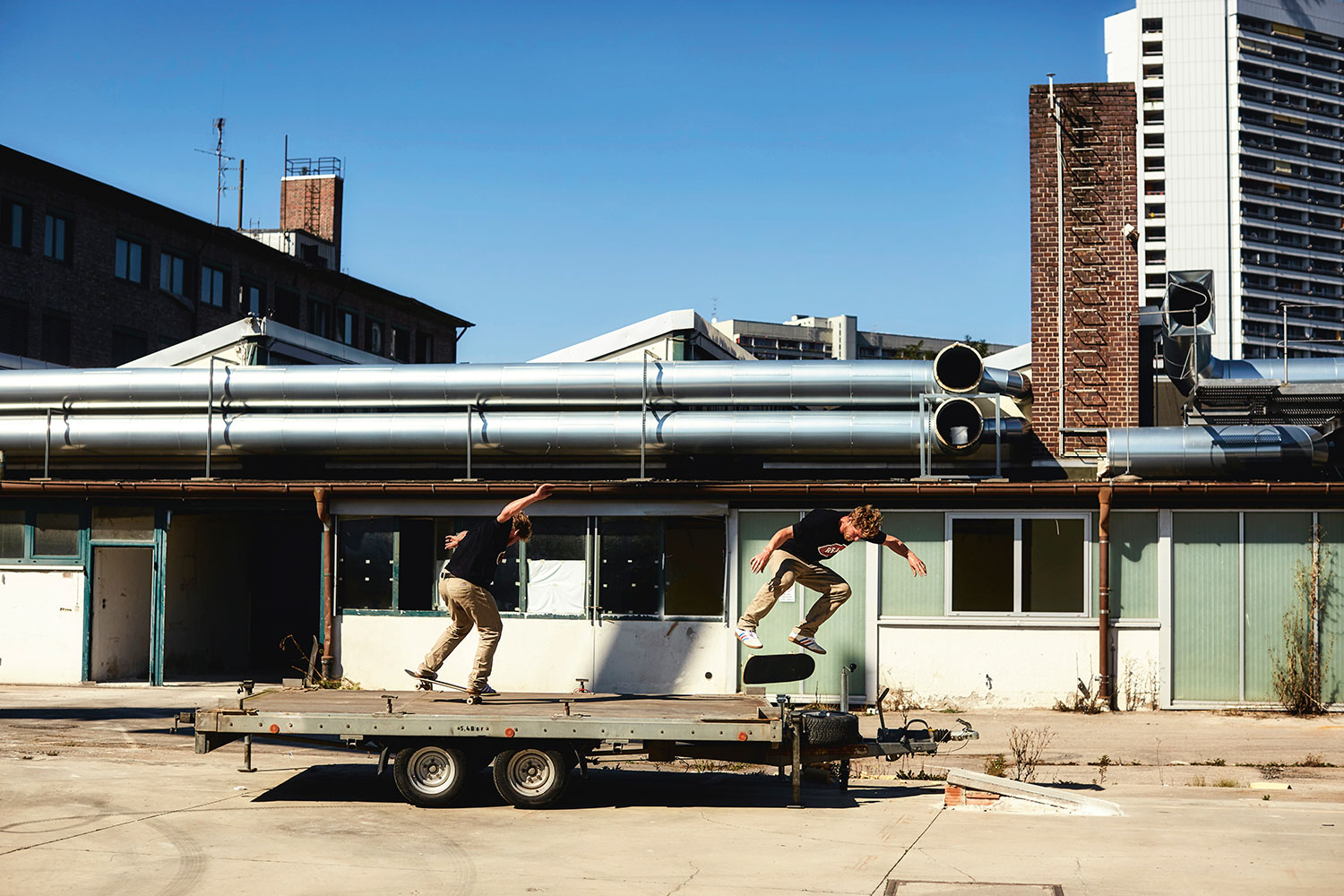 So although you live now just outside of the city, how have you seen SF change over the past 16 years you’ve lived in the area?
It’s gotten a lot blander. I remember it having a lot more mix of people. It’s really gotten a lot more cleaned up and the whole city looks like the Marina now. For people that don’t know the Marina is more like San Diego just more southern Californian. Fuck it’s so hard to say shit without insulting somebody or offending somebody!

Ah don’t worry about it!
Ok it’s kind of like a big outdoor mall where everything’s all shiny and there’s no more griminess. You know like how it is up in Portland; I guess Portland is losing that kind of stuff too.

But there’s still the Tenderloin (notoriously grimy SF neighbourhood) in SF!
Yeah the Tenderloin’s a little harder to clean up, but they’re working really hard on that too.

But it’s still fun to skate there no?
Yeah, they can’t get rid of the hills! But a lot of spots are disappearing. It just seems like it’s getting kinda not as exciting as it used to be, but that could also be because I’ve been there for so long. Maybe it’s just a part of getting older and the world is changing… (in old man’s voice:) ‘I remember when blah blah blah’ and whatever… It’s hard to tell what’s going on.

So a skate tourist is coming to SF to visit, where would you recommend they get a bite to eat?
Food? Well burritos, you have to get a burrito when you’re there in the Mission.

Where’s your spot?
We go to Papalote, but that’s not really an authentic Mexican spot… Pancho Villa is good on 16th. That’s what I’d recommend or Cancun, but Cancun is rather gnarly actually. Go to Pancho Villa.

Where is your coffee spot?
Oh just the one by my house. I don’t really like, uh yeah… I’ve lowered my coffee standards a whole bunch. (Laughs) I don’t even get espresso drinks anymore; I always just get plain ‘coffee’.

Away Days looks like it was tons of travelling… What have you been up to since it has finished?
Still just travelling, nothing’s really changed. They had like the whole premiere tour and everything and then after that they just did a bunch of other stuff. Yeah it hasn’t really slowed down that much.

So how was it hanging with Snoop Dogg? What was it like?
He’s rad. He’s like perfectly comfortable with whatever… He just met us at a spot and we’re skating and stuff and he just pops out. He’s just really chill and was having a good time. He’s definitely intimidating… I couldn’t really talk. I can never talk. I wanted to ask him things and just talk, but I couldn’t get myself to. I just tripped out that it was Snoop Dogg and Nakel (Smith) and Jake (Donnelly) were there and they took over the talking. So I just kinda like sat back.

So what’s your take on skateboarding going to be in the Olympics?
I can tell you one thing I’m not going to get all upset about it like a lot of people. I don’t think it’s worth wasting your energy on. I think it’s cool, I don’t know… I think it’s cool it’s getting that kind of recognition. The Olympics is the most recognition any kind of sport can get… And whatever, I guess you could get into if it’s a sport or not at all too. But I guess I would just say to some it’s a sport so then it’s cool for those people. And you can talk shit on them all you want, but I think they are doing incredible stuff. They are bringing stuff to skating, and it’s not for everybody, but you have to kind of give it credit: it’s gnarly.

I think for your average skater it will not affect them very much…
Yeah I’d like to think so. People still go out and play H.O.R.S.E. on a basketball court and I’d like to think that people are just going to go out and skate even if it is an Olympic sport and just do it casually.

Let’s hope so. Ok so last one, do you have a favourite place you’ve ever skated or favourite session you’ve ever had?
Oh that’s a hard one. In general I’m always really stoked that I got to go on those Anti Hero/Real trips. We did one to Arizona and one to the Northwest, to Oregon and everything. That’s when (John) Cardiel was skating and everything and (Tony) Trujillo and whatnot… I look back at those (trips) very fondly, just ‘cause it was rad to see Cardiel going for it and especially with what happened and everything, I think that’s an extra fortunate thing to have been there. You’re gonna make me cry man! (Laughs) Those were rad sessions for sure.

I’m sure they were. Cheers Dennis.