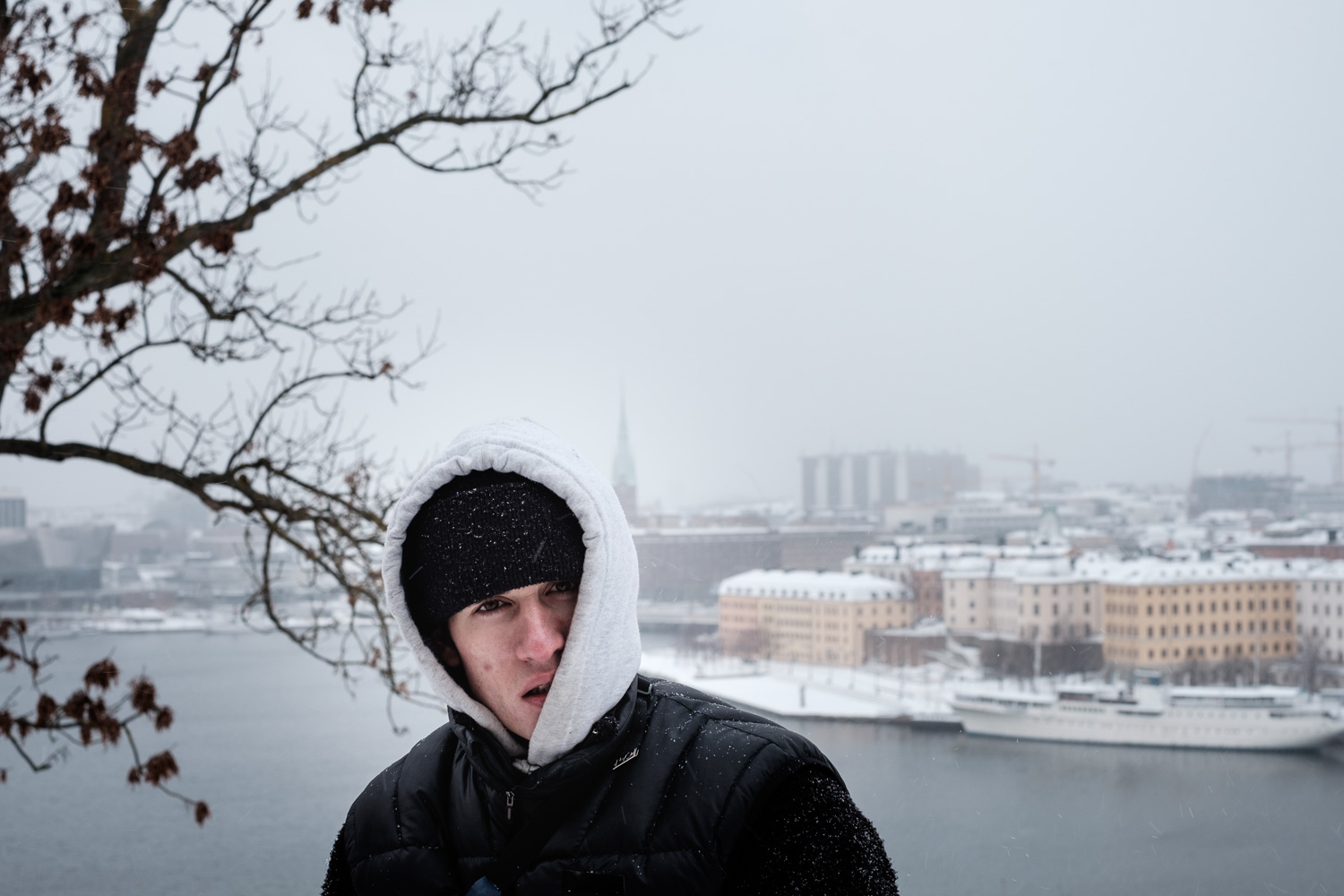 You’ve seen him in the Polar videos, and possibly at demos or on the streets, and it’s pretty obvious that David Stenström is quite impressive on the board… But what is David really like? The few times I’ve seen him he’s been pretty quiet. Later this week a short piece about David entitled Homegrown will premiere, which will give everyone more insight. But as a prequel to that we got our good friend Alex Irvine to have a little chat with David to learn a little bit more about this Swedish ripper. –Will Harmon

Hey mate, how are you doing? Been a little while since I saw you; about two years or something. You all good?
David: Yeah I’m really good actually, skating, doing what I do.

We got snow over here at the moment, well, shit snow. I was speaking to Dan (Magee) about this video project you guys worked on (Homegrown), he was saying that you had loads of snow over there when he came over to film.
Yeah, It’s super shitty at the moment, all the snow has melted away; it’s just grey. A week ago it was pretty sick, a half metre of snow and 15 below. 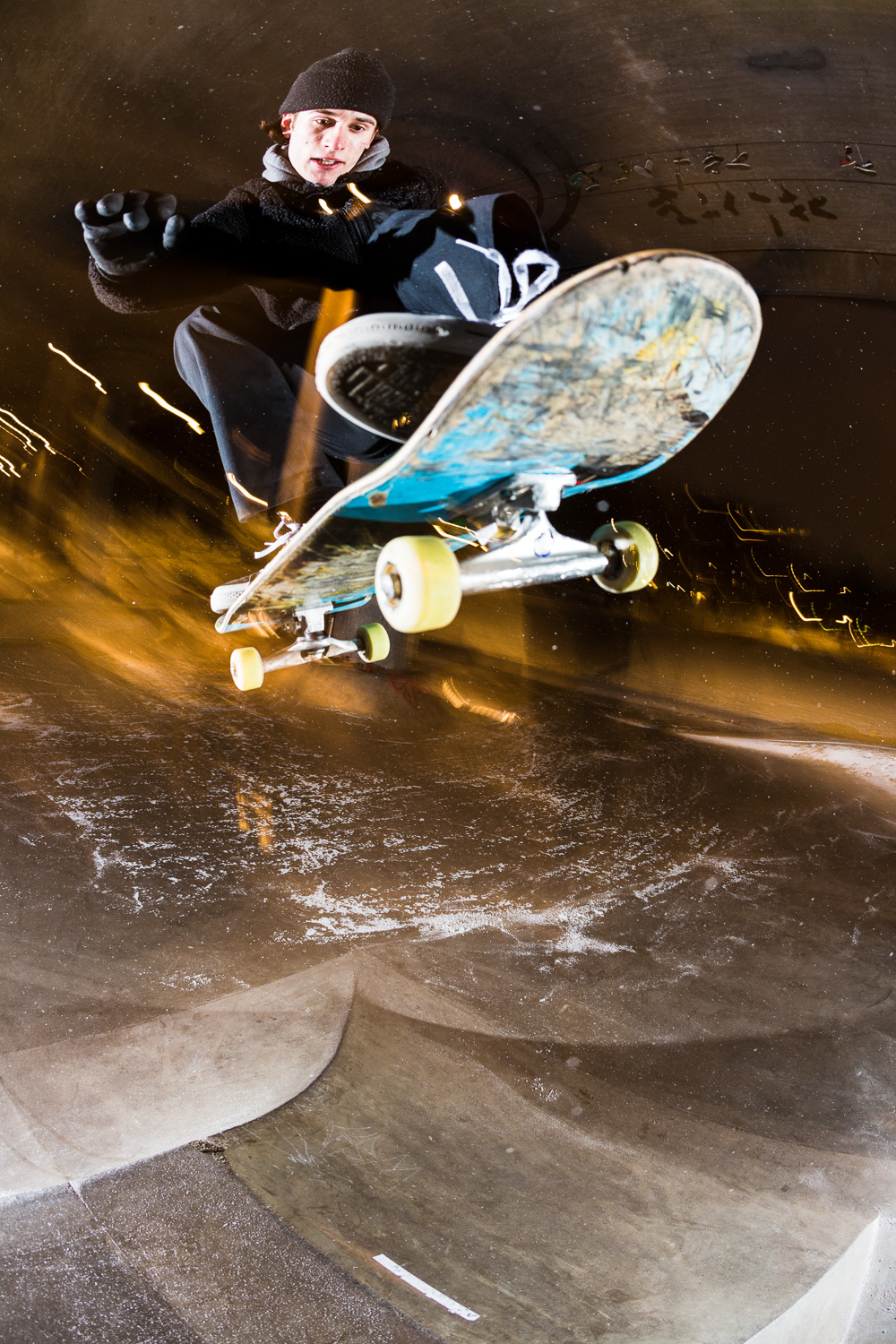 David braves the ice and cold in Stockholm for a shred. Ph. Nils

What do you do when it’s that kind of temperature?
Just listen to music, I dunno. Coffee, go to skate the indoor park and bar on the weekends. Or Wednesday. I dunno. A lot of my friends make music or play music, so I always go when they’re playing or listen to (their) records.

But you don’t make music yourself?
I wish I could but I can’t… I sew, like fixing a pair of pants with a needle and thread. I’ve been doing that a lot lately, like three hours a day. Taking a pair of jeans and making some embroidery or sewing on a nice patch – customising your stuff a little. I just fixed up a beanie today, you know a pom-pom beanie, put one of them on there and hand-stitched a heart on there.

Do you do it for other people, friends, or just for yourself?
Myself. My friend asked me for the same thing as I did on a pair of jeans. He wanted the same, he offered to pay me but I’m trying not to do it. It’s a cool thing to do when it’s like this, nice to have something to do besides skate. It’s always fun to skate but it’s fun to do other stuff too. I’d rather do this than sit on the computer. 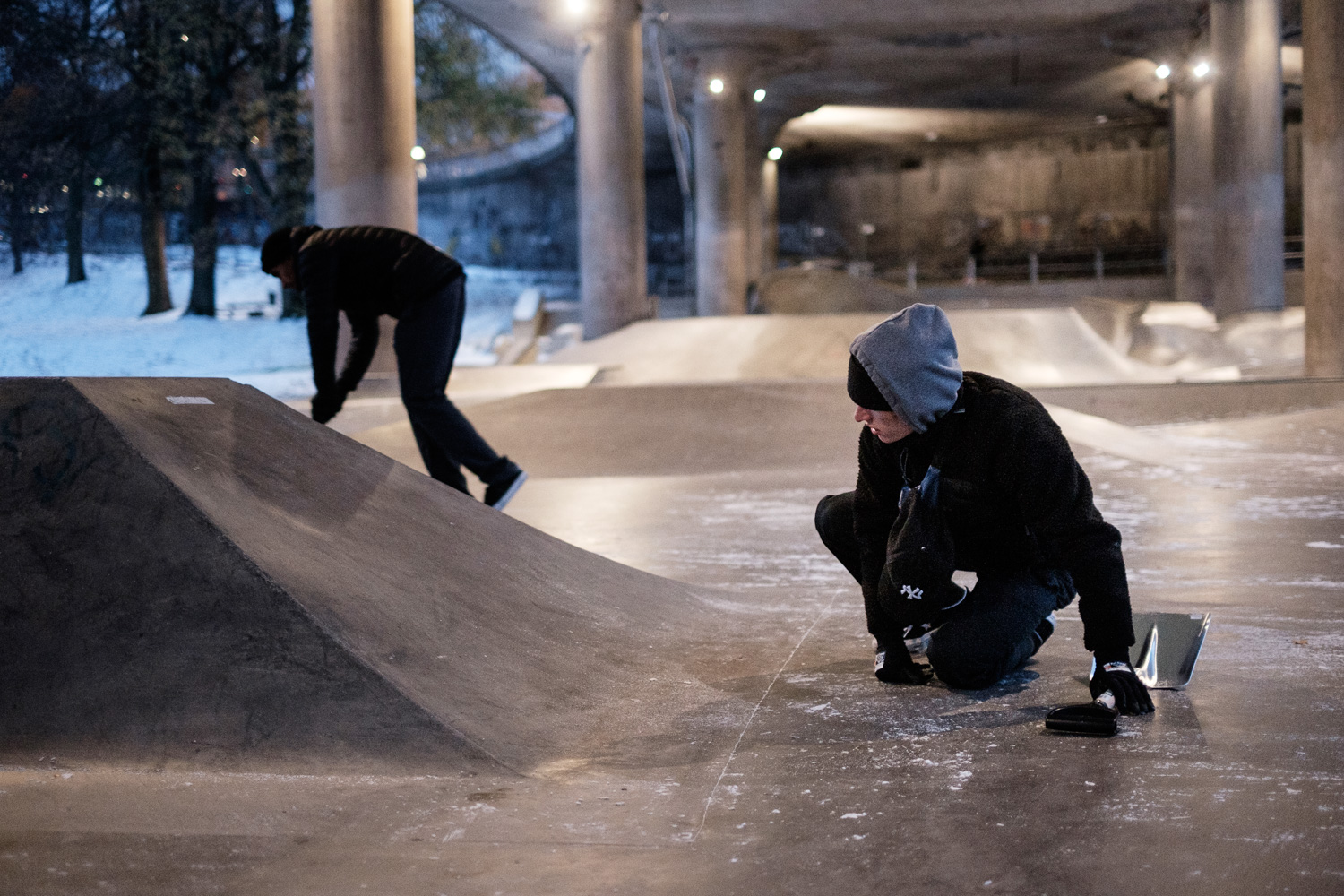 Is it something you think you’d like to do after your ‘career’ in skateboarding?
I’m into a lot of stuff, but I don’t have a real idea of what I want to do after skating. I mean I guess I’m kind of pretty young still. I think by the time I’m 30 I might have figured it out. I guess you get older and get into different stuff.

True. What kind of music do your friends make?
Mostly House and Techno. It’s not like I’m: ‘YES! HOUSE!!’ but a lot my friends make it and I like it. My friend Leo is super-talented, he can do whatever he wants (he) does a Reggae song, then a Techno song, R ‘n’ B one… He’s super musical, he can play a lot of instruments. He’s the one who made all the music for this clip. He’s quick too. He made like two songs in 30 minutes. He makes stuff really quick then doesn’t doing anything for two weeks. He doesn’t sit there for ages.
I kind of feel the same way about skating. Like I would never try a trick for longer than five minutes if I’m (just) skating. Like a serious trick, maybe filming it, then yeah. But it doesn’t feel natural, for sure it’s dope to stick with a trick and it feels great when you ride away and make it, but it doesn’t feel like I’m going skating – (just) practicing this trick. You can see that in a lot of people, when someone practices his skating. 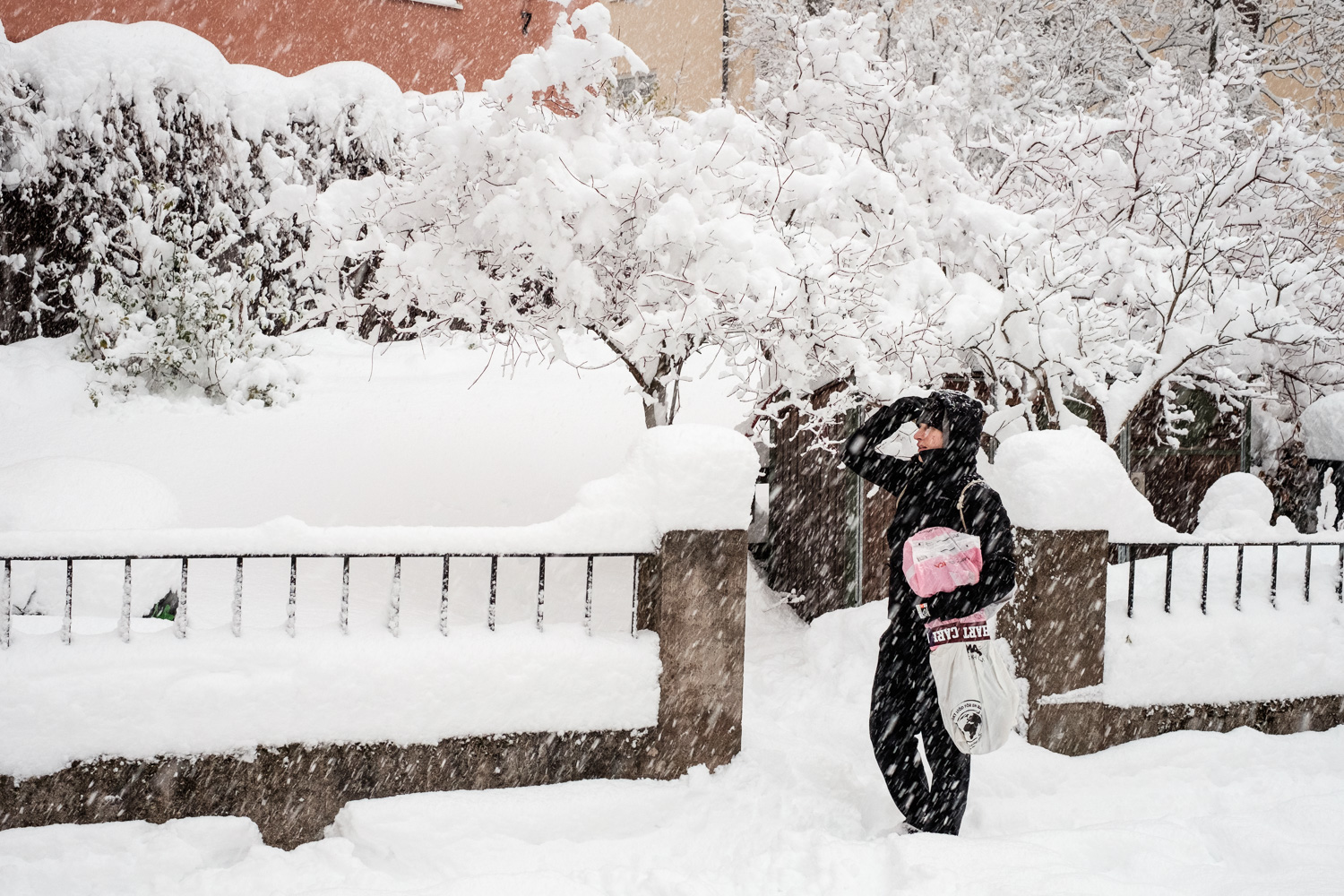 Like it’s too perfect?
It depends on the situation. When it looks nice it looks nice. If you go to some skatepark there’s always some dude that’s trying too hard. They make the craziest trick every try but it’s not natural, he just practiced everything. It’s also pretty cool that you can have this motivation to be like: ‘I’m gonna be fucking good!’ And you get really good, but I feel like when you see someone just skate and do stuff along the way that’s not really planed it’s like, WHOA! Like watching Oski skate, he’s that kind of guy. He just drops in and does stuff, he just skates and crazy stuff just comes… All this stuff is really obvious, haha.

Haha, yeah… You and Oski were on Polar since before Polar was Polar, right?
Yeah, we were the first guys. I think I’ve known Oski for like ten years or something now; I started going to Malmö a lot and me and him got on the same shoe brand, Servant. It ended up I always slept at his house all the time; we’ve always been good friends. Pontus told me he was going to start a brand at the Swedish Skate Awards – I’m like 15 or something – and he was coming up to me saying I had an ugly shirt on, and I was like, ‘Your shirt is really, really bad!’ and it turns out it was the first Polar shirt, haha. After I told him that he said, ‘You wait and see, this thing is gonna be the fucking shit!’ A month after that we went to a skate contest, me Oski and Pontus, he drew on this board three faces and wrote: Alv, Oski, David, Polar – we’re not like all the others. And (then) when the first board came Oski jumped off, so it was only me. He was saying Pontus didn’t make any clothes, and he wanted clothes – he was like 13/14. I was the only rider for like two months I think. Then Hjalte (Halberg) got on, then Jakke (Obvgren) – who used to draw all the cartoons. The first Polar tour we went to the Bright tradeshow in Berlin and to Hamburg, (then) when we came home Pontus gave Oski a second chance or whatever you wanna call it. I’ve known Pontus since I was like 12 so it’s a long time

So who was your inspiration growing up? Malmö isn’t like super close to you.
My Dad used to skate, he didn’t push me into it though. There were always pictures of him skating here in the house, there still are. I looked at this picture and was like: ‘I wanna do that!’ I did a lot of stuff growing up, football, climbing… I was really into climbing when I was young – I used to go with my dad.
I got my first skateboard and went to these bowls near where I live and I felt like, this is nice, I wanna do this.
I was really stoked on Tony Trujillo; my first skate video was Tent City. I watched it with my dad and he was like: ‘This guy is really dope!’ I was stoked on him, it was when he had long hair – he skates different now. If I’m searching for skate clips on the internet – not on Instagram, trying to not watch too much stuff over there because it’s overload – then it’s Tony Trujillo Tent City. It’s black and white and he skates in this park and he talks whilst he’s skating: ‘Just fucking get on and ride as much as you can and don’t plan out any lines and kinda cruise…’ That’s a good clip. 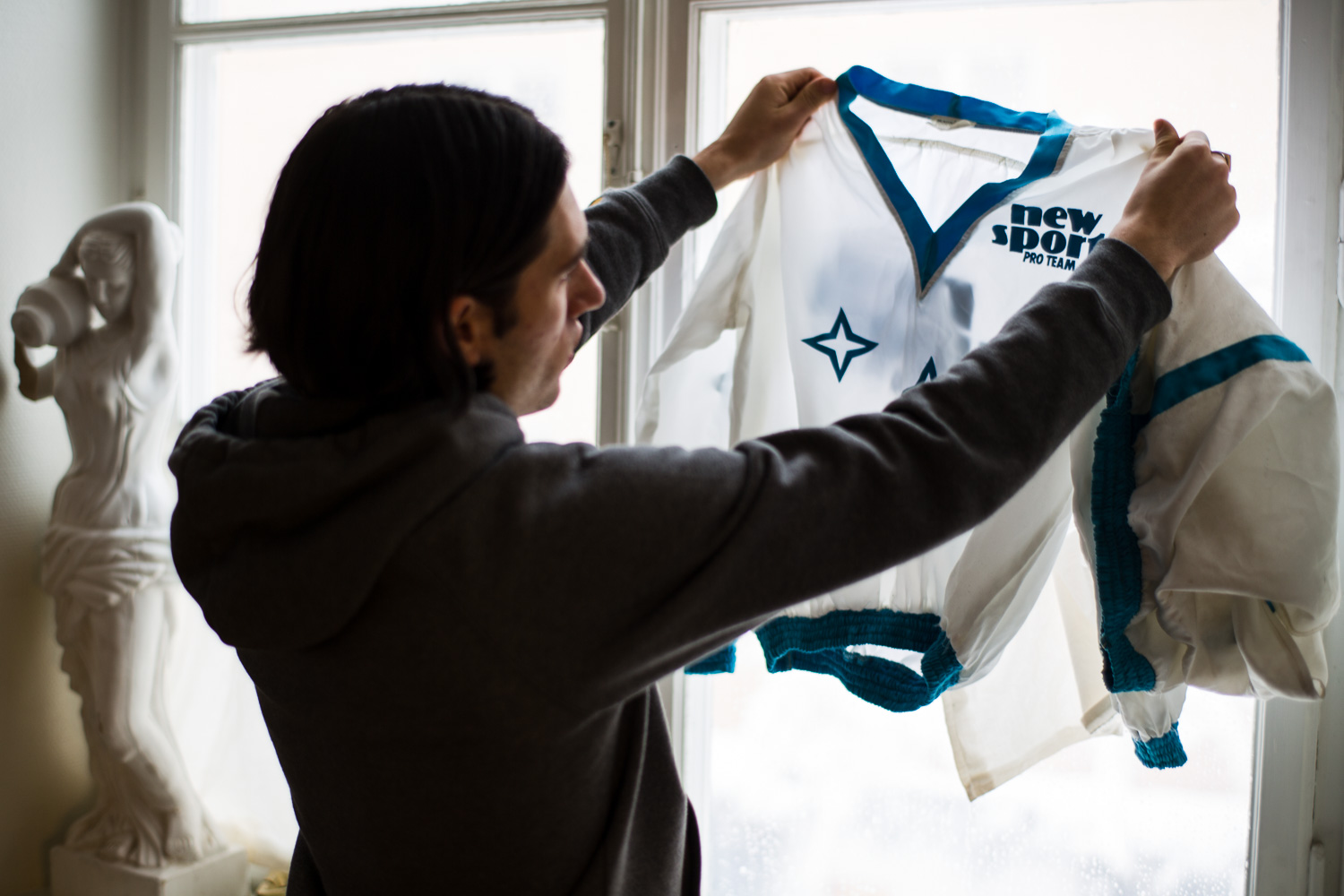 I guess there’s not a lot of that in skateboarding these days – just people going skateboarding. A lot of it is quite contrived.
There’s a lot of stuff out there, it’s really hard to focus on your own skating too I feel. The last years I’ve really just been trying to pay attention to my own skating; it’s easy to just focus on what everyone else is doing – but you’re you, you’re your own person I guess. Everyone is really good, so it’s hard…. This is obvious too, you know… It doesn’t matter how good you are, it’s still style that’s gonna make you different. And when you’ve been skating for over ten years it almost feels like you’ve seen everything.

It must be exciting to be a part of the new wave of influential European skateboarding though? I mean it has affected how the industry view skateboarding in general. Not trying to blow too much smoke up Pontus’ ass but he’s definitely done good stuff for European skateboarding with Polar.
You should always give a person what they deserve. I give it to him. I said that to him – I don’t care if it was (me) on Polar or not, he really killed it for sure. I know skateboarding is his religion, it has always been. Skating for I don’t know how many years and he knows how this works. I think he’s seen why no one is doing this…
It’s maybe obvious to him but not to other people…

How do you think Swedish skateboarding is viewed by say, someone in California or the rest of the world?
I think Sweden has some of the best skaters. Everyone has a lot of character. I feel like that when I go on trips sometimes then I come home. I feel like Scandinavians have a lot of character. Not talking shit on anyone…
Scandinavia forever bro! Haha…
Anyway, I don’t think you should look at what other people are doing, just look at yourself. It’s easy to judge. Just look at what you’re doing. It feels better that way. 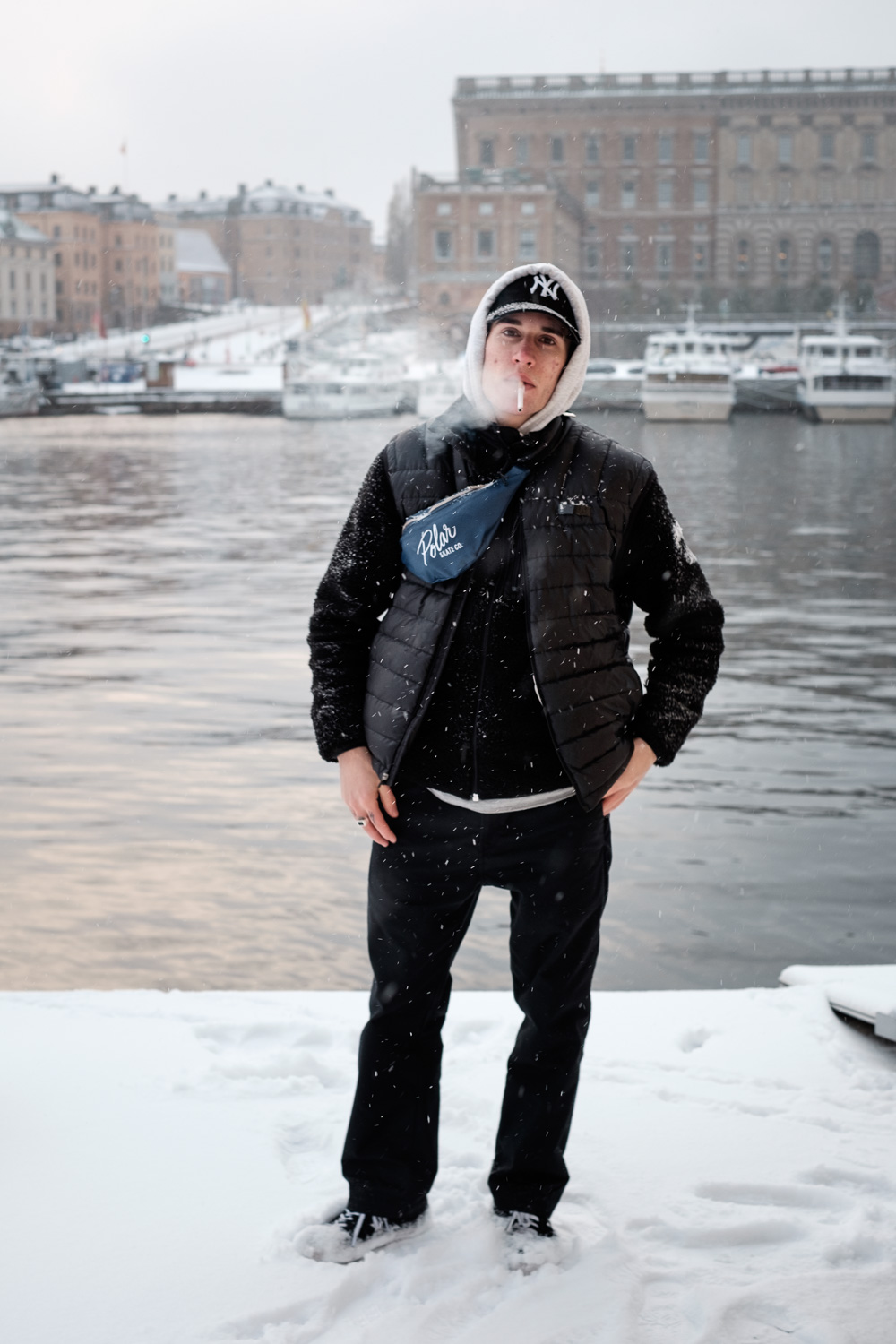 Where are you going tomorrow?
Puerto Rico, it’s a Polar trip. We hit the lotto! It’s gonna be good, I’m gonna get chauffeured around. I don’t like flying though.

What like the physics of how the plane stays in the air?
No, that’s sick; it’s like, the people. Like some old guy holding 200 people up whilst they’re standing in the aisle trying to put their luggage in the overhead locker. Why don’t you want to do this quick!? And like in the line for security, waiting ‘til they get to the machine to take all their belt and jewelry off. Like, why didn’t you do that in the 15 minutes you spent in the line?!

David you’re starting to sound like an old man. Are you old in the mind?
The other day on the train, this girl walks in, has all this stuff in her hand, sits down and opens up a sandwich and starts eating in the train. Why do you wanna eat on the train!?

Man you are old. Some people need to eat, even on a train.
Yeah But I don’t wanna feel your salsa you know. Eat it before or eat if after. The other day I saw a girl eating a hot dog. I mean, imagine what has been on that train… This has nothing to do with what we’re saying. Sorry…

I’ve seen people cutting their toenails on a train in London. I draw the line there. Haha.
Yeah, that’s a life sentence. That’s criminal, you should go to jail for that. I think even eating a sandwich should be two to three years. Toenails, life sentence, not sure what you’d have to do for death sentence. I dunno, people… People are strange.

That’s it. That’s the end.
Oh yeah, sick interview, the sandwich talk… I have nothing smart to say. Haha.