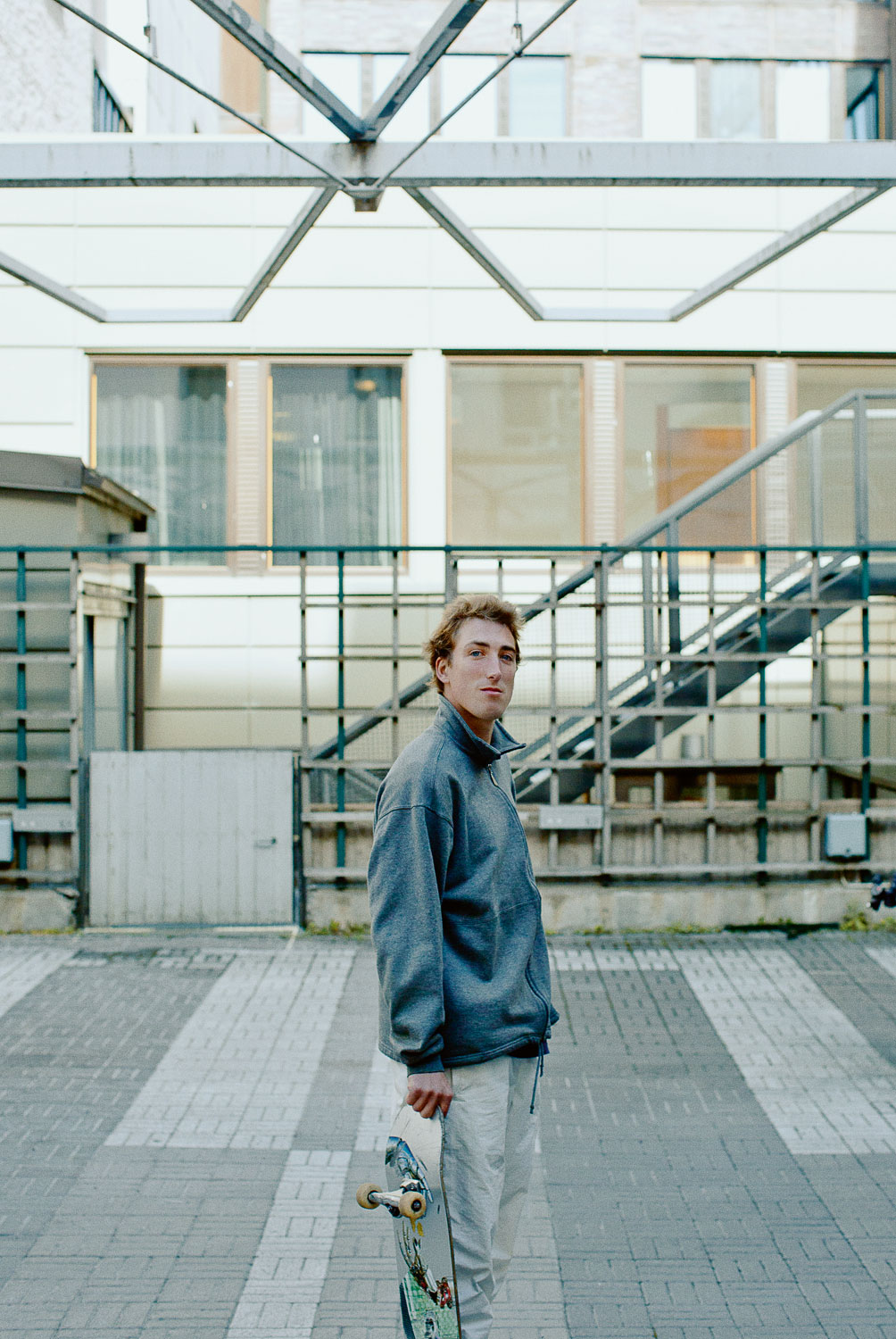 He closed the show in the V Nice edit, and is about to wrap another part for Palace’s debut full-length video, but what keeps Rory Milanes in the groove? I find the rookie pro in a candid mood to talk deep fried biscuits, saving the dance floor, and Southbank’s enduring legacy.

Rozzer, you’re pro, congrats mate! How does it feel?
It’s banging, I don’t have to work anymore. Yeah, life just got infinitely better.

Palace threw a surprise party for your board release. What went through your mind when you walked in the shop to see everyone there popping champagne, surrounded by all your pro boards on the wall?
I was overwhelmed! There was so much attention on me. It was quite gnarly at first, but it gradually began to sink in and I just got more and more stoked. All of my close friends were there so that felt good. Mate, I was so stoked! I’ll never forget it. 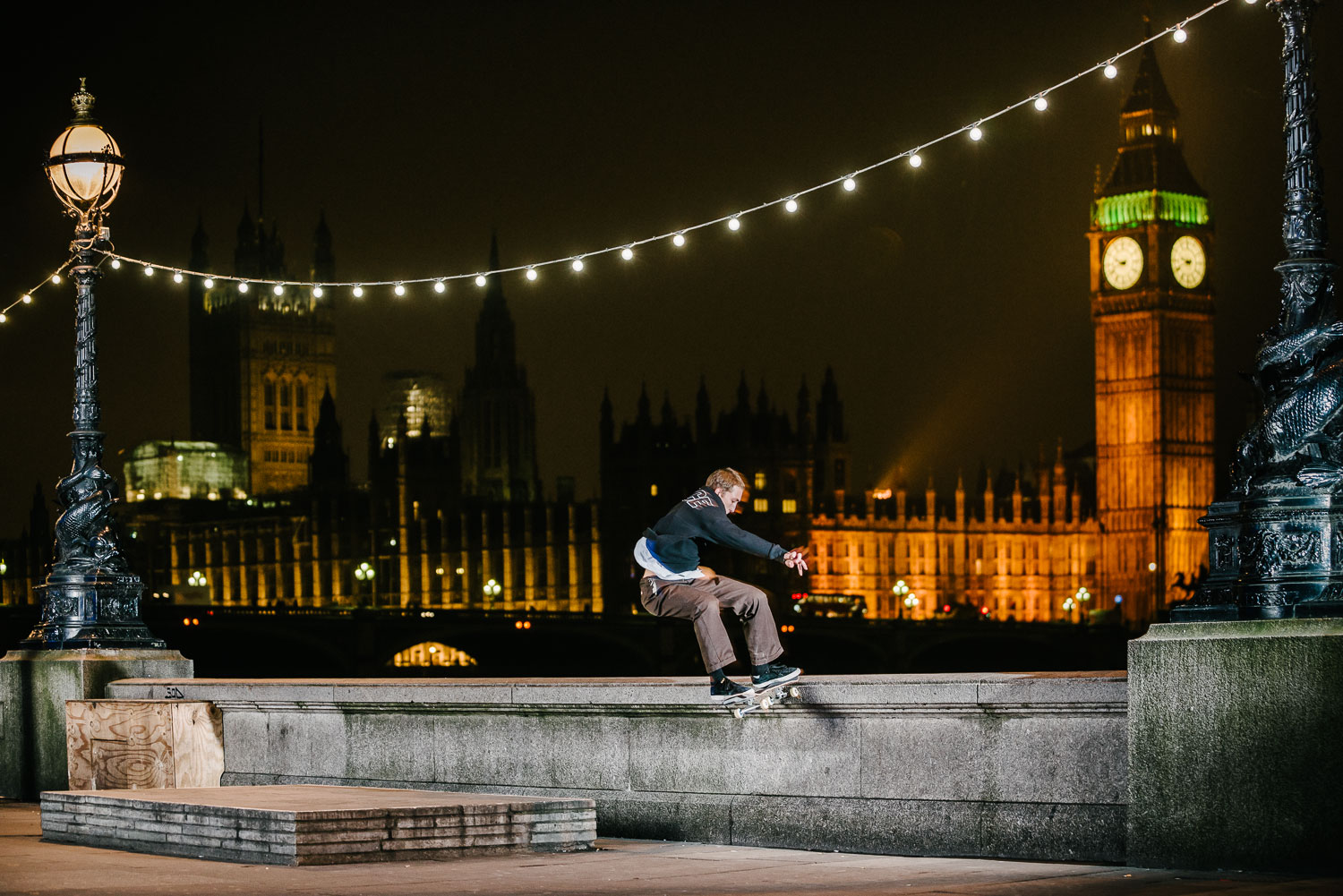 Did you honestly have no idea? How did Lev manage to keep you away from the proceedings until you went to the shop?
Nope! Dunno, but he smashed it. Everyone did in fact. You know what though? I just remembered Toby (Shuall) actually mentioned to me a little while ago that he saw my graphic – two robots passing a nugget of weed – but I didn’t clock it. I must have been zooted. Or I was doing that thing that I tend to do sometimes when someone’s talking to me, and absolutely nothing is going in.

Filming’s well underway for the Palace video. How’s that been going?
Yeah great, mostly. I’ve been injured a lot these last two years, but that’s skating, and skating will always be there, so it’s fine. The video though, yeah, it’s happening. It’s gonna be so sick; people ain’t ready. 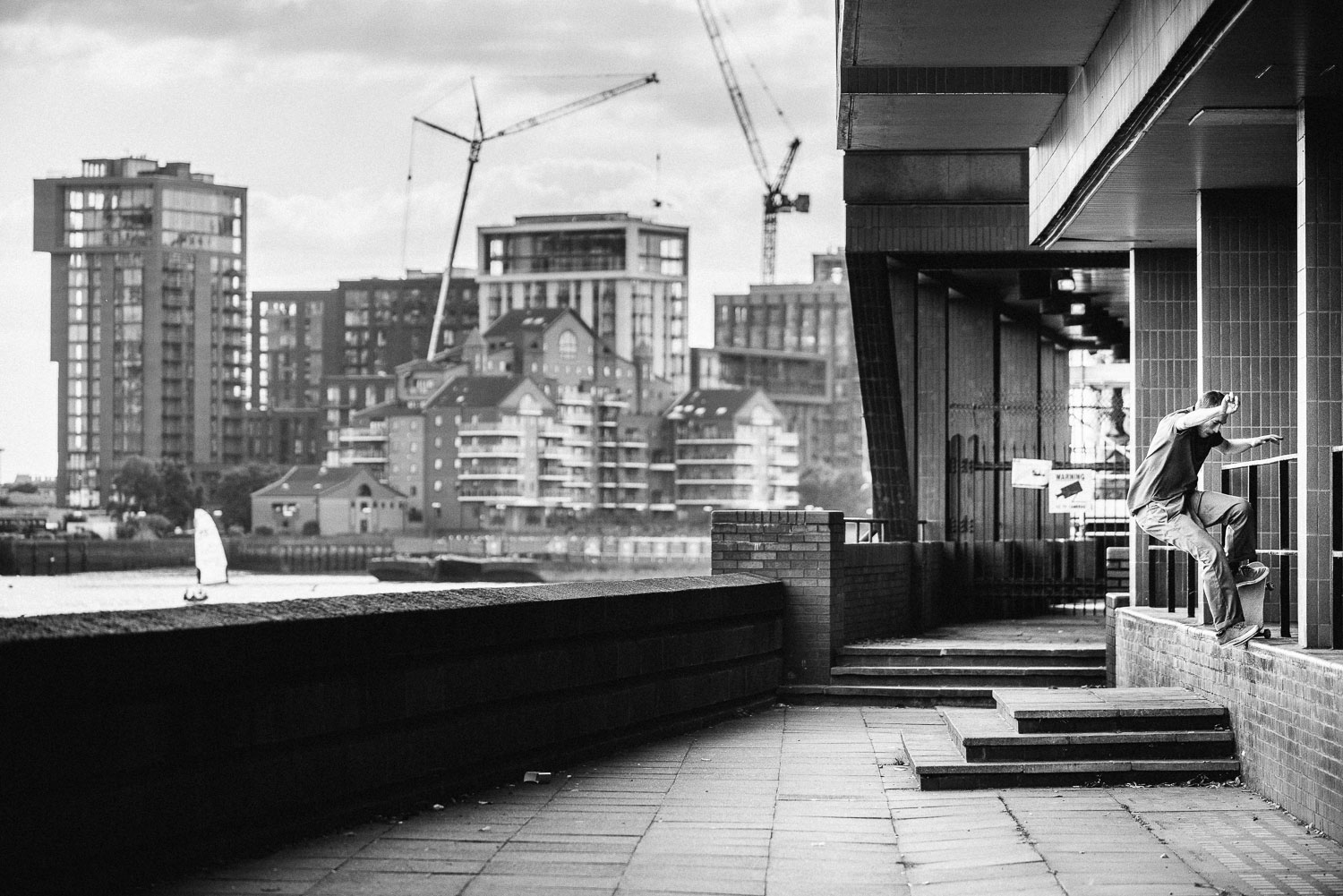 The video will be London-based, but in filming for some of the smaller video projects you’ve been on a bunch of trips. Do you have a favourite trip, and why?
Hmm, easily LA. Palace trips are just the one! It’s family. I don’t even rate LA that much as a city (maybe because I just don’t see myself living there) but the most recent trip there, I had stupid fun! The skating was banging, the yard we were staying at was a joke, DJing that party in Chateau Marmont, everyone we met and hung out with was friendly, smoking the gnarliest dank… Ah it was too good! The food was nuts too. Anyone who’s been to LA knows that the food’s insane. I just love trying bonkers shit when I’m in a different country even if it’s proper stinking. You just gotta do it, innit? In ’n’ Out Burger, Roscoe’s (House of Chicken & Waffles), Philippe’s (French Dip Sandwiches), all those diners, and going in on Mexican food. I remember some of the orders that Lev made to the house: ‘What’s the difference between the $250 deal and the $350 deal? Yeah the $350 one… What, deep fried Oreos? Yeah, two portions of those please.’

But growing up skating in London I guess it’s rad to have the opportunity to film a part wholly in your home city?
Yeah it’s good that the video is just in London. I’m stoked on that. And yeah, it always stokes me out to have footage here in London. 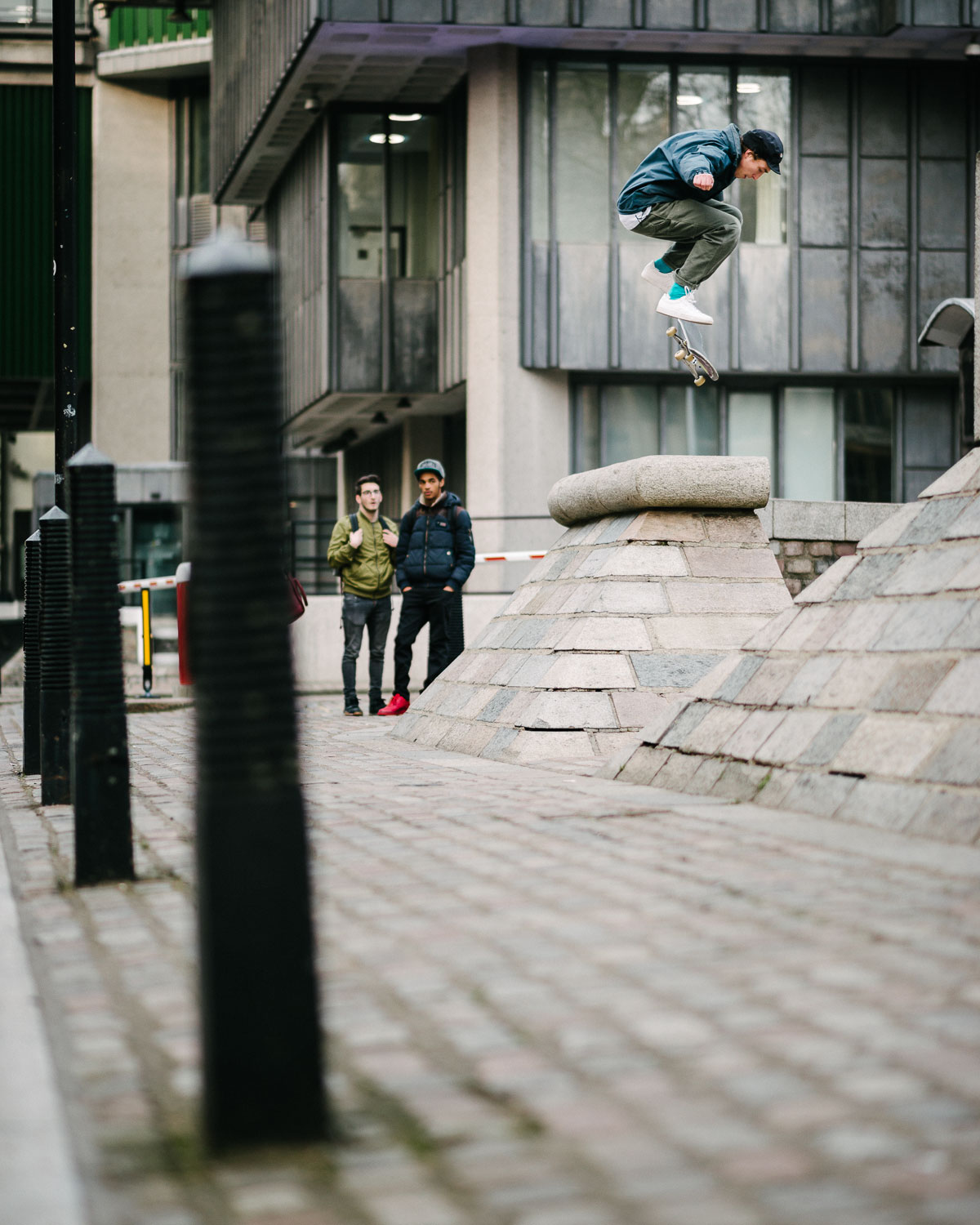 Revisiting old spots, or some new ones popping up?
Yeah, old spots in town mainly. No new spots really.

What was Southbank like when you first went there as a kid?
It was amazing. I hate to say it, but it was better. Blatantly better! I still love the place though. It was just great before because we all skated there religiously everyday. It was all open too, so flat ground was better, skating freely. The little banks were banging and there was that weird wooden beam which was fun. The tricks people were doing there when I was a kid used to stoke me out so much! That’s when I started getting properly gassed on skating, street skating. The place, the people, the whole vibe, I loved it.

Do you still skate Southbank much?
Yeah man, defo. I still like it. Amazing that it managed to stay there – I still cannot believe that. There’s always new things to try, endless possibilities ‘n’ that. Everyone skates that shit differently and that’s always really interesting to see. I prefer skating Stockwell, or the Ritzy (plaza in Brixton) though. 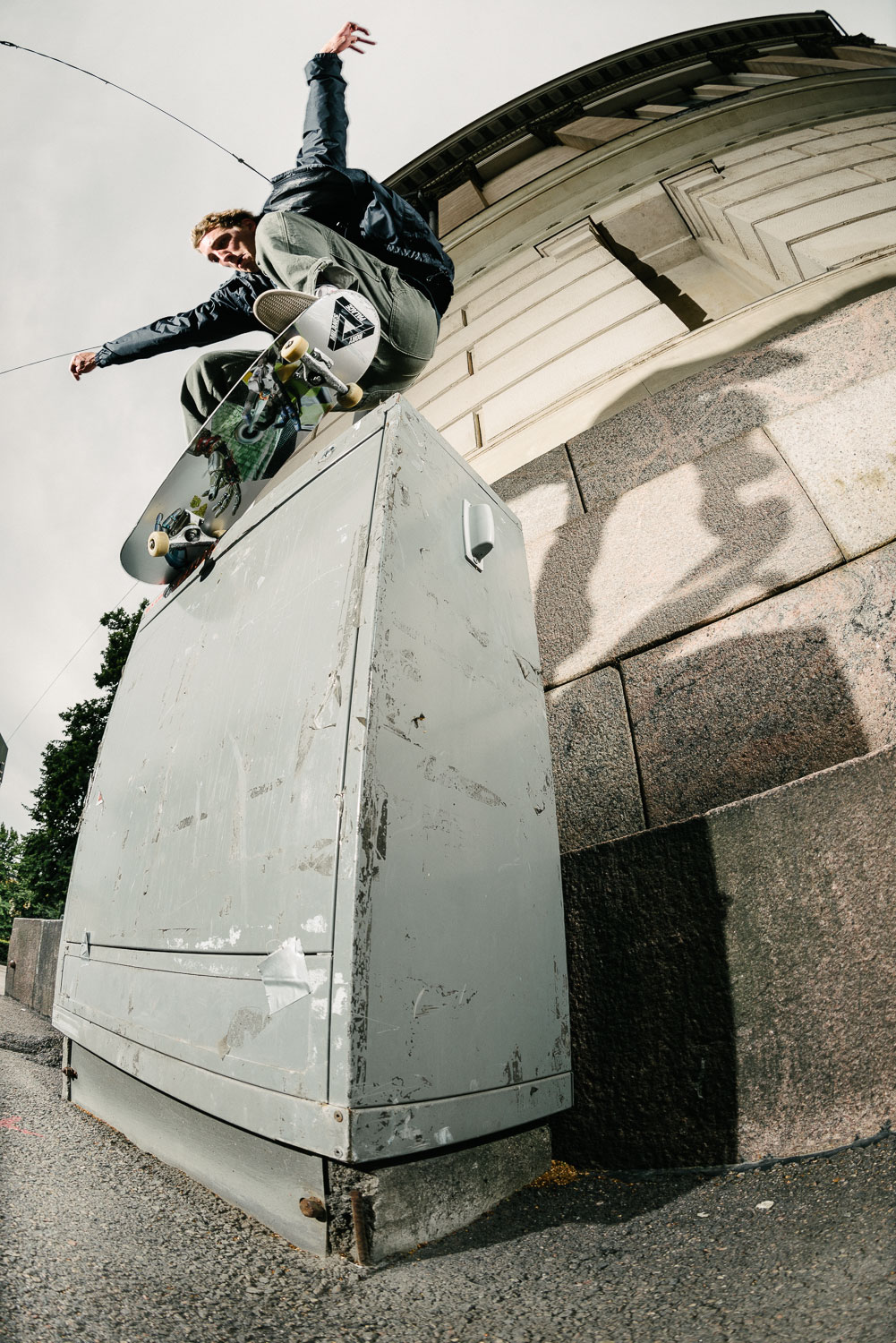 How has it changed over the years, both Southbank, and the wider London skate scene in general?
There’s the blocks that skaters put there. The people that used to skate there don’t anymore or rarely do. I guess people get old. Also though, I think some people out of our crew don’t like it as much as before. It’s WAY smaller and there is a railing that separates the spot from the pedestrians. I know some people think that’s a bit bone, and it is in a way; you feel like you’re in a zoo or something, but that never really bothered me. The whole of the Southbank area is much busier with tourists and people from out of town now, but I remember that whole zone used to be dead. It was empty. Then loads of bait restaurants started popping up and now the place is full of them, which really upsets me when I walk down there. I think the graff looks shite too, and I like graff. I love it in fact! But listen, I’m not slagging the place off. It’s still a wonderful skate spot and I value it enormously. It’s an OG spot. It’s legit as fuck. I’m just saying that it has changed over the years. As for the London skate scene I don’t know really; I don’t care.

What’s your day-to-day routine these days?
Tea in bed, jam for a bit, make a nice breakfast, try to start the day nice. Go filming with Brooks and whoever is on it or, if I’m not filming, I’ll go skate Stockwell or something. Then go home, jam for a bit, make dinner, go to the pub or go out or chill, watch some shit… Dunno, have a mix?

I know you find time to balance skating with other things. Can you talk a bit about music, DJing and stuff?
Yeah, sure, but skating has always been the main one. But definitely, I like having other things in my life. It’s healthier and it makes life better I think. When skating’s done, I don’t want to be slumped because I didn’t take an interest in other shit. Also, when you’re hurt, what you gonna do? Yeah, I buy records; I got decks. I love playing them. I play out sometimes and I’ve started doing nights, but mainly I enjoy it at home.

Who are you most stoked on right now music-wise?
As far as current tunes go: Robert Hood and Jeff Mills. They’re still making good music. I always get their latest tunes. Busy Signal, the Roots & Chalice mix, Chronixx is wicked! It’s mostly older music that I find myself listening to these days. There’s still new stuff about and that’s great but they don’t make ‘em like they used to. 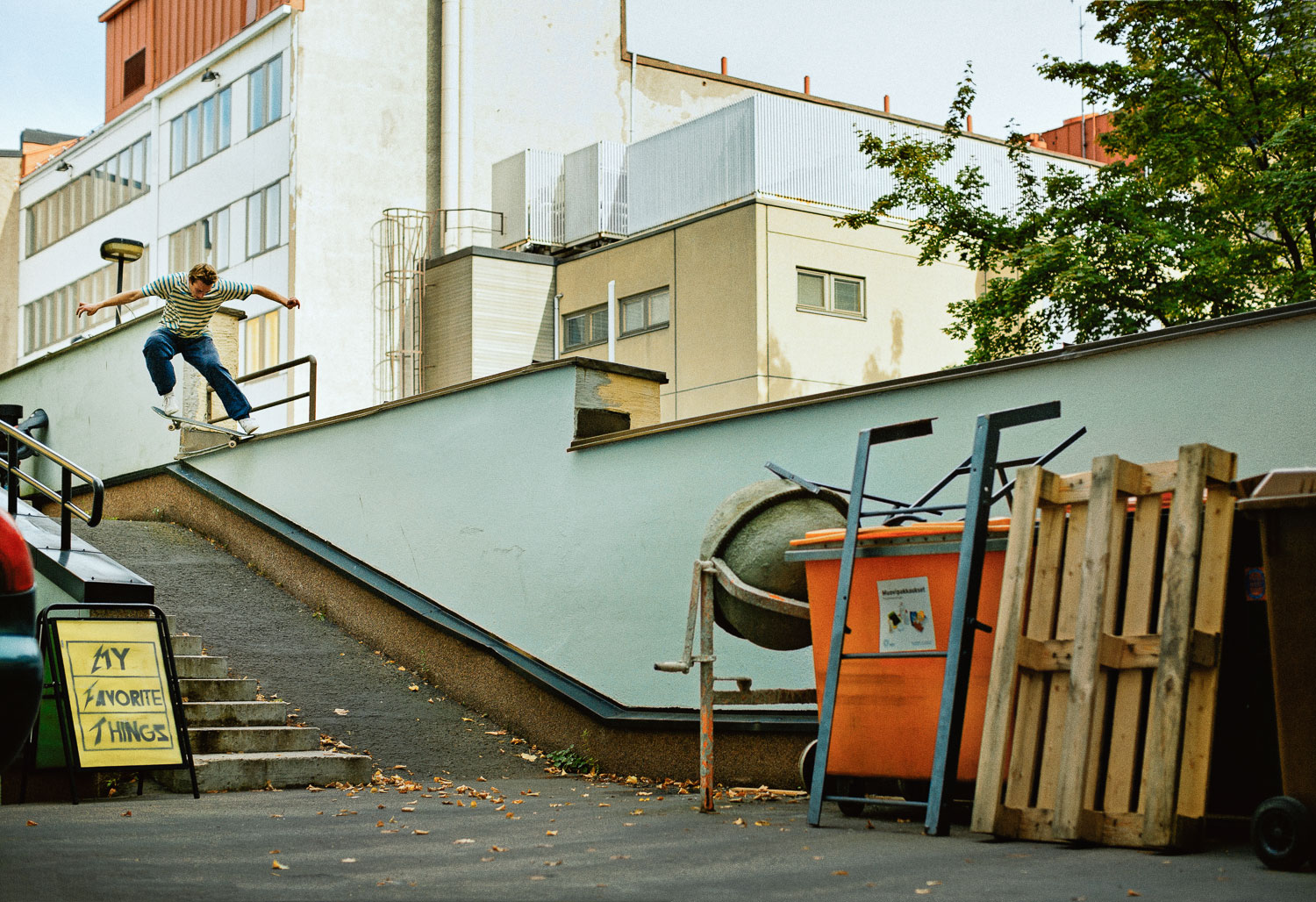 What track would you play to get a waning dance floor on its feet?
Greg Cash ‘Party Chat’.

What track would you play to me in the car on way back from Glasto avec gnarly hangover?
Glasto, ha ha, I remember that! The state of people there – fuckin’ hell! That was when we first proper hung out innit. OK sorry, tune to sort us out coming back from Glastonbury: Neil Young ‘On The Beach’.

What else floats your boat off the board?
Not a huge amount, but I like reading books and I like watching films or documentaries when they’re good. Going out for dinner. I love to cook also. Checking galleries sometimes. Definitely checking music – there’s always lots on in London. Taking care of the garden. I really like ‘pinting’; I’m really good at it. Been doing it for a while. Going away is always nice too.

Social media ain’t your bag. Props. But do you have an opinion about its place in skating? I heard the other day about someone getting sponsored solely off the back of Instagram and I almost spat out my tea.
Almost spat your tea out, lolz. Yep, that’s bonkers. That’s how it is now, is it? Wow!
Social media’s place in skating, hmm, are we talking about Instagram? I don’t have a clue what goes on in that world. Am I missing out? I’m tempted to say ‘Hmm, no?’ I heard that some people get upset if they don’t get enough ‘likes’. That’s one of the most depressing things I’ve ever heard! ‘Why doesn’t Rory have Instagram?’ That cracks me up! I really don’t want to get addicted to that shit and it doesn’t really interest me. I like my shit Nokia! I guess social media’s good from a business aspect. I totally understand that. I don’t have a business though, and I don’t want to promote my personal life.

Any plans for the future? Do you see yourself staying living in London for the foreseeable?
Who knows? I’m open to living outside of London, but at the same time I feel like I’d find it hard to leave. I’m comfortable here, and I get to go away quite a lot with skating, so that helps to not get over being in the same place. I’d like to live in the country when I’m older. 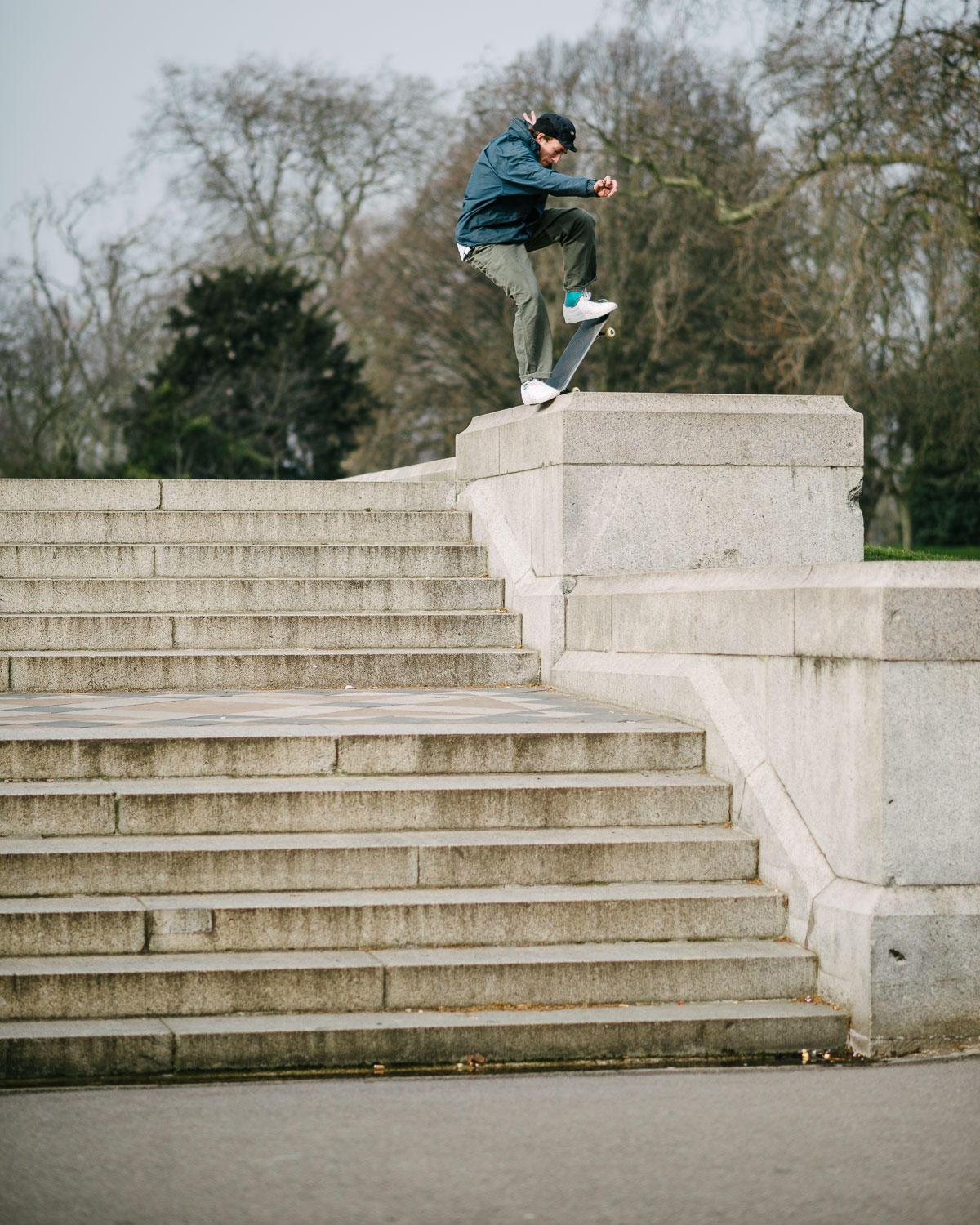 Any sunny skate sojourns lined up now the dark nights are drawing in?
‘Sojourns’, never heard that word before. Holidays? Hell yeah motherfucker! I’m gonna go back to Yard (Jamaica) because I love the place, and I’m going to Colombia.