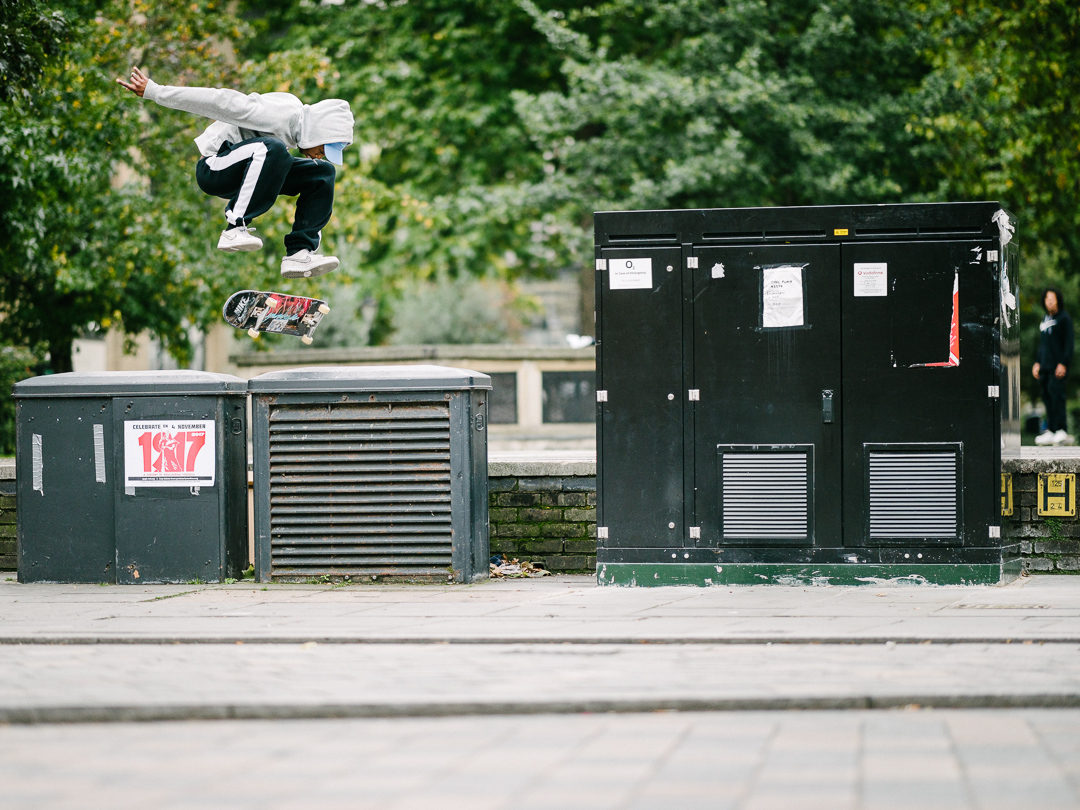 Kyle Wilson, fakie hardflip. If you’re in London this Thursday come down to Bad Sports for a screening of Will Miles’ new clip featuring Kyle, Nick Jensen and all the footage from this mission. We’ll be putting the vid on at 22:30 and giving out free beer. All photos are by Sam Ashley.

Like a surprising number of ‘ideas’ that fill the pages of this magazine, The Nik Stain Campaign stems from a Cherry B fuelled conversation between a bunch of skateboarders sat on a wall in south London. For some it was the trousers, for others it was the high velocity smith grinds, but that evening everyone on the wall was fascinated by the man. Especially a certain Kyron Davis, who freshly back from a weekend in Paris with Nik for some Nike x Supreme thing, was able to confirm that he was as much of a legend off the board as he was on it. ‘That guy’s my G!!!’ As the inebriated fanning out went on, one thing led to another and before I knew it I was promising Ky and the crew that I’d try to convince someone at Nike to fly him over from New York to film with Will Miles and get some photos for the mag. That way we’d get to see him skate in person…

When I’d sobered up, given the context in which I’d come up with this master plan, I started feeling slightly dubious about the whole thing. Luckily convincing the Swoosh overlords somehow turned out relatively easy so all I had to do then was get in touch with Nik to see if he was down. This felt a bit trickier. I can’t help but get a little bit weirded out by the idea of hitting up skateboarders I’ve never met for the mag. Especially if I really admire their skating. It sort of makes you feel like you’re 14 again and trying to talk to a girl you secretly fancy on MSN Messenger. You try to play it cool, doing your best not to sound too keen or full on, you mention friends you have in common (in this case Ky) and once the message is sent you’re left wondering if they even know who you are (or in this case what Free is). ‘I hope he’s available and interested…’ It’s stressful stuff. Luckily he was though, and exactly one month after I sent that enticing email, him and buddy Hugo Boserup (the powerful Dane he shares a part with in the 917 video) could be seen sipping Cherry Bs on the wall that started all this. 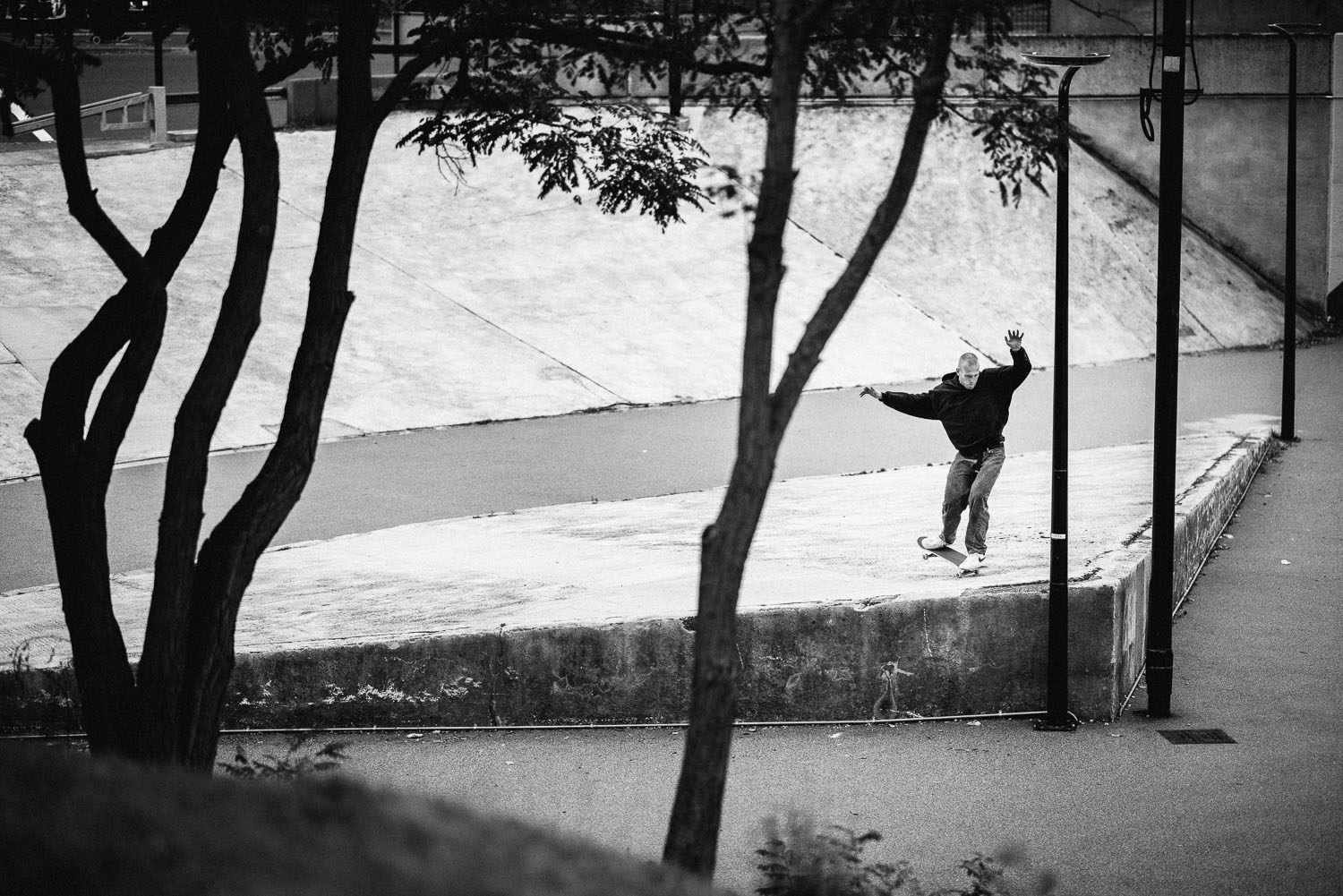 Nik Stain, nose manual
Nik cut his chin open trying to nose manual the world’s lowest step on the first day. He didn’t ollie properly, stuck and smacked his head on the floor. We had to take him straight to a hospital to get him glued up. Funny that later he ended up landing this… If you get a chance to go to this spot, try just riding all the way up and through the poles, it should give you an idea of how insane this is. 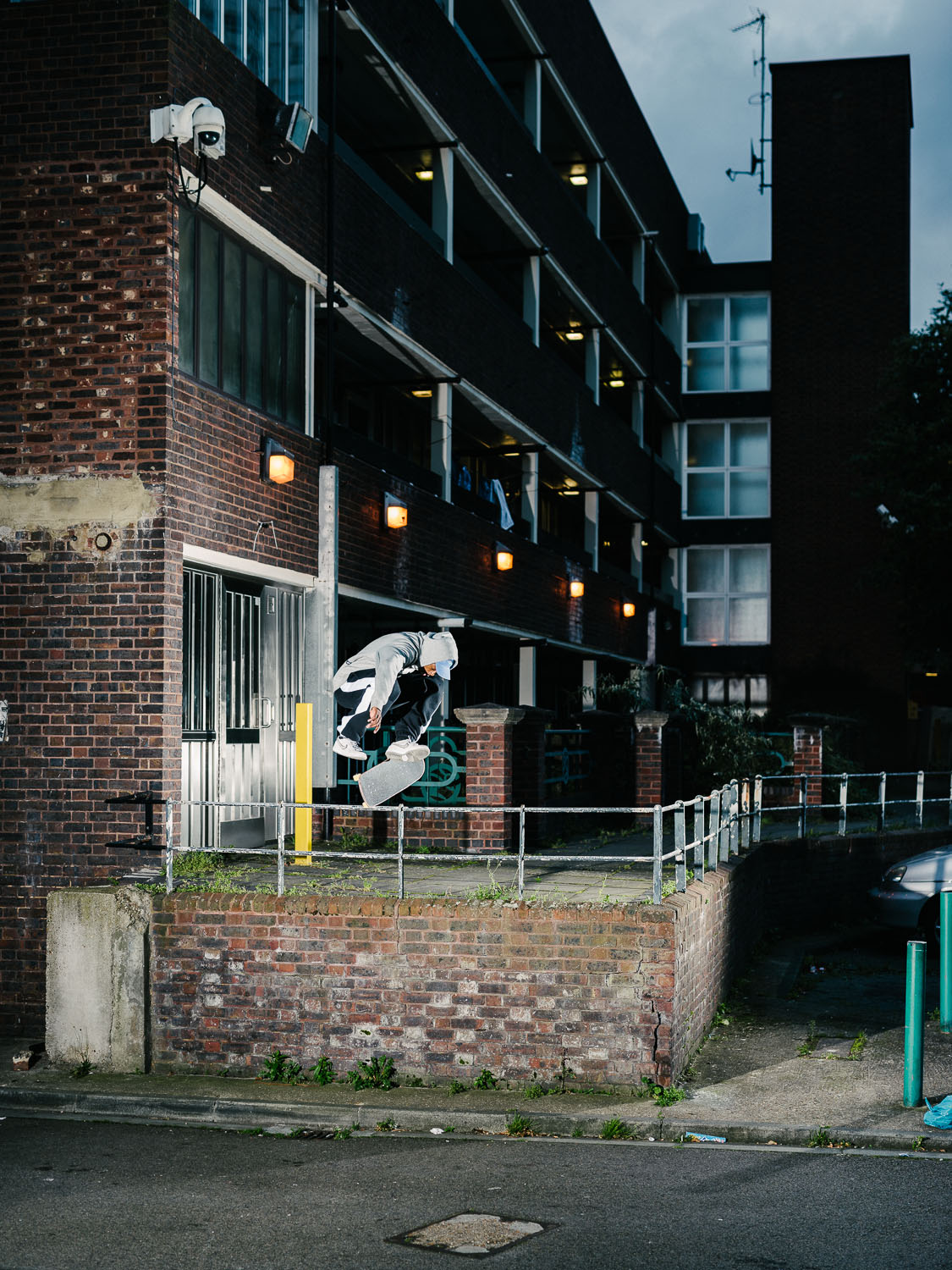 Kyle Wilson, switch kickflip
I didn’t get to witness this one in person but I bumped into Nick (Jensen) and Tom (Knox) who were rushing away from the spot to get back to their dad responsibilities. ‘Mate we have to run, we should have left ages ago but Kyle was doing the gnarliest trick ever. We’re going to be in the doghouse… Get over there and watch the clip!’ I’m pretty sure that kind of compliment coming from those two says more about how crazy this is than anything I could write. 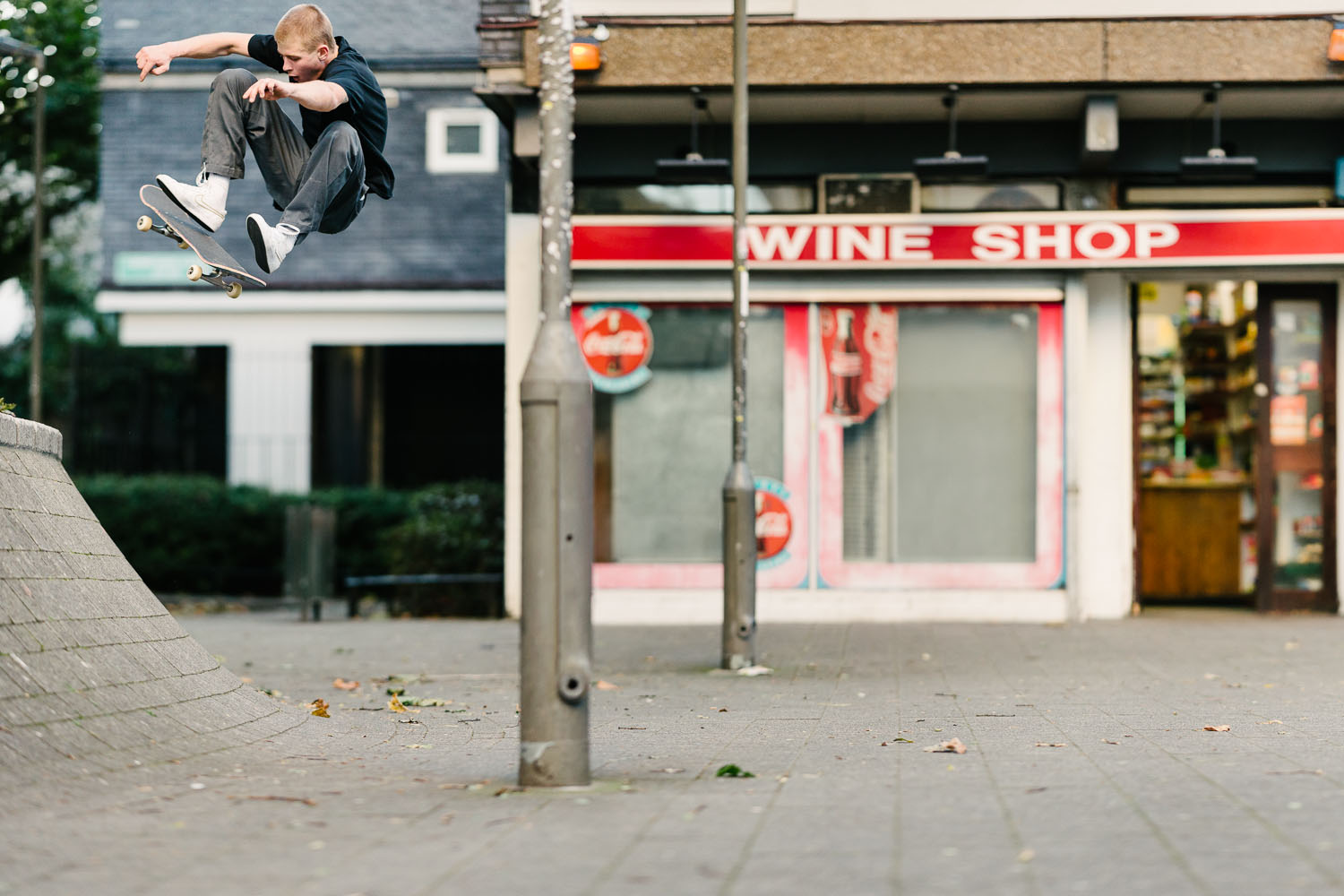 Hugo Boserup, frontside flip
Looking at the shop in the background makes me wonder how many Cherry Bs these guys consumed while they were out here. I’d say at the very least three a day for ten days. That’s 60 between them. We even managed to get them some at a sit down meal on the last night.They were hooked. 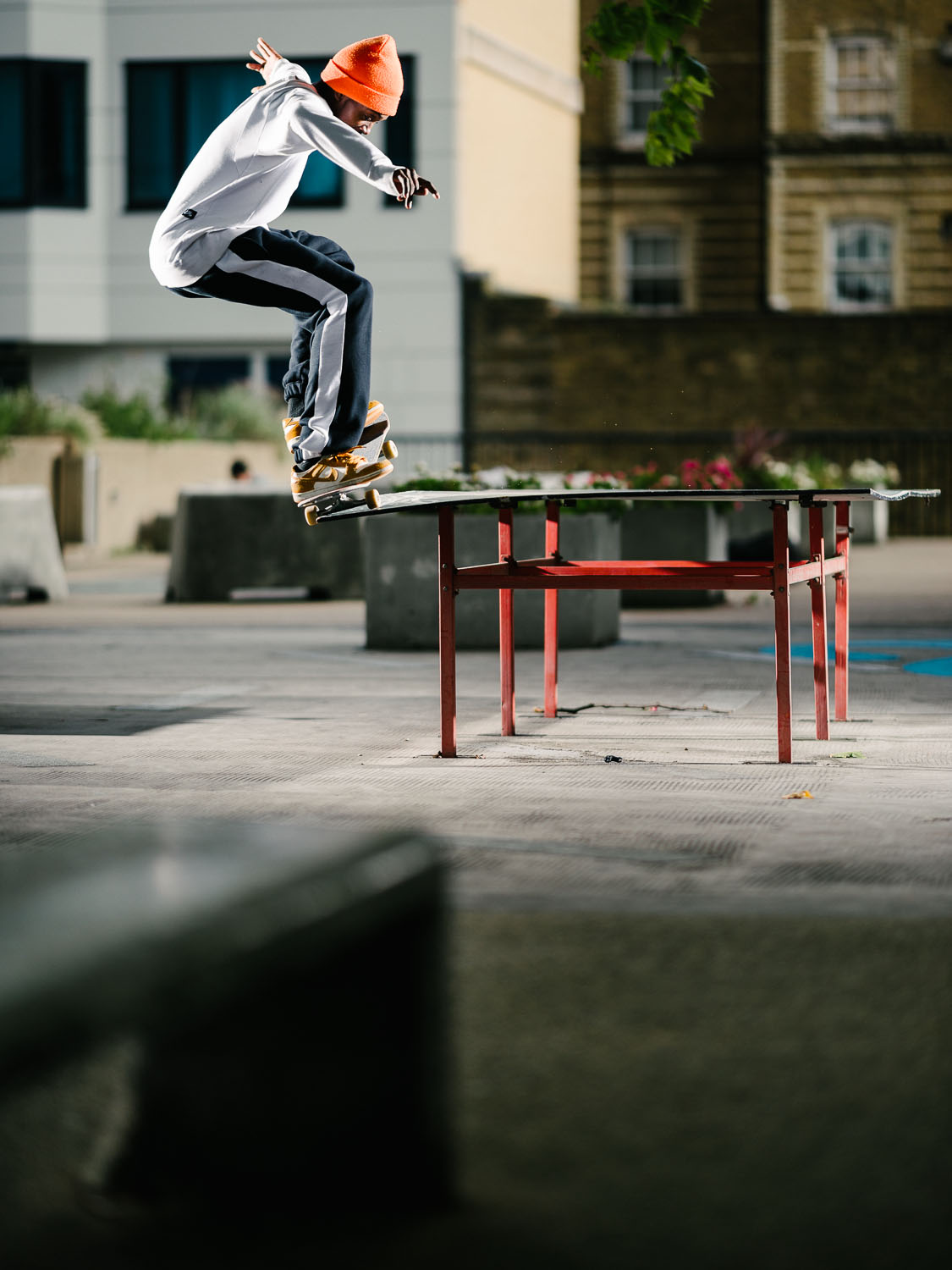 Kyle Wilson, switch frontside nosegrind
Fun Kyle Wilson fact: Kyle discovered the high jump at school and liked it so much that he ended doing it for three years. It’s pretty easy to see how that might have affected his skating. 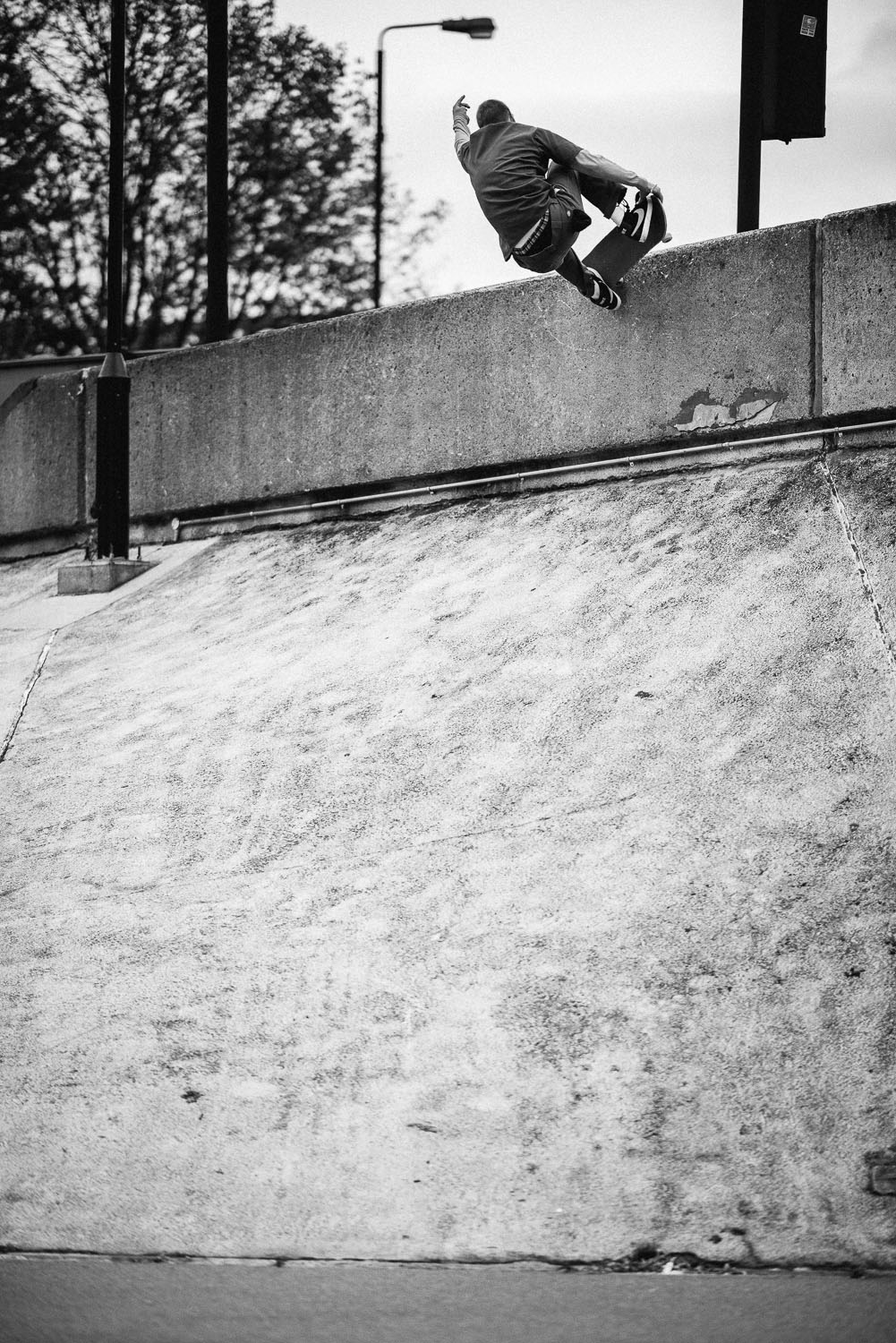 Hugo Boserup, nosegrind tailgrab
In London what we refer to as ‘skateboarding’ involves A LOT of sitting around in pubs waiting for spots to dry up. Hugo and Nik were introduced to the mid-session half pint that day and for some reason it blew their minds. I guess showing restraint when it’s clearly pissing it down probably seems amusingly over-optimistic… It didn’t take long for these poor guys to realise that in this city the weather’s never too bleak to completely write off skating. 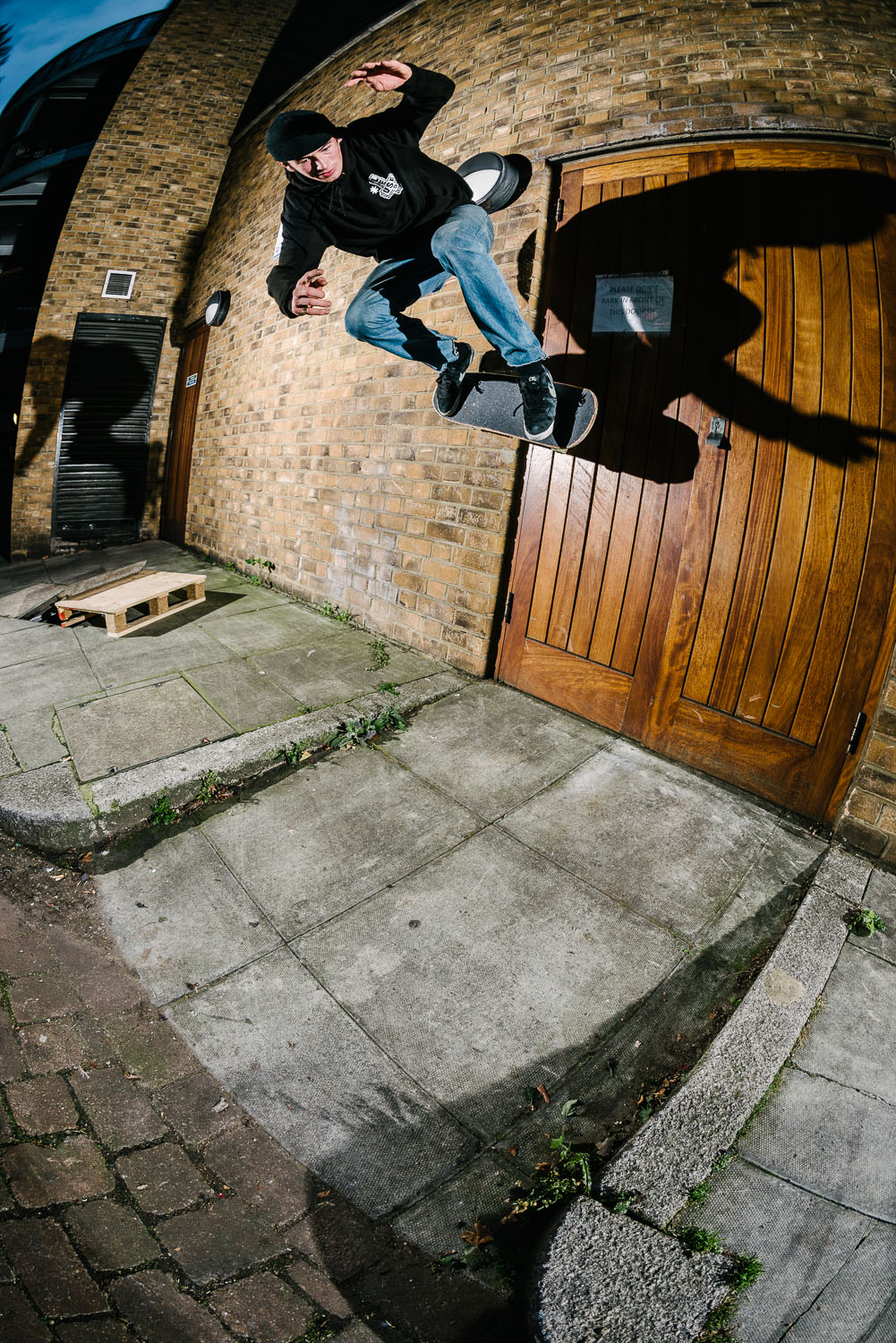 Charlie Birch, ollie out to wallride
At this spot my friend Eddie was talking to Hugo about how cool it was that a group of people from Denmark, Norway and Sweden could communicate with each other using their native tongue (even though it obviously isn’t the same language). His reply was: ‘I guess it’s kind of like when you guys talk to Charlie right?’ No Hugo, Charlie’s just scouse. 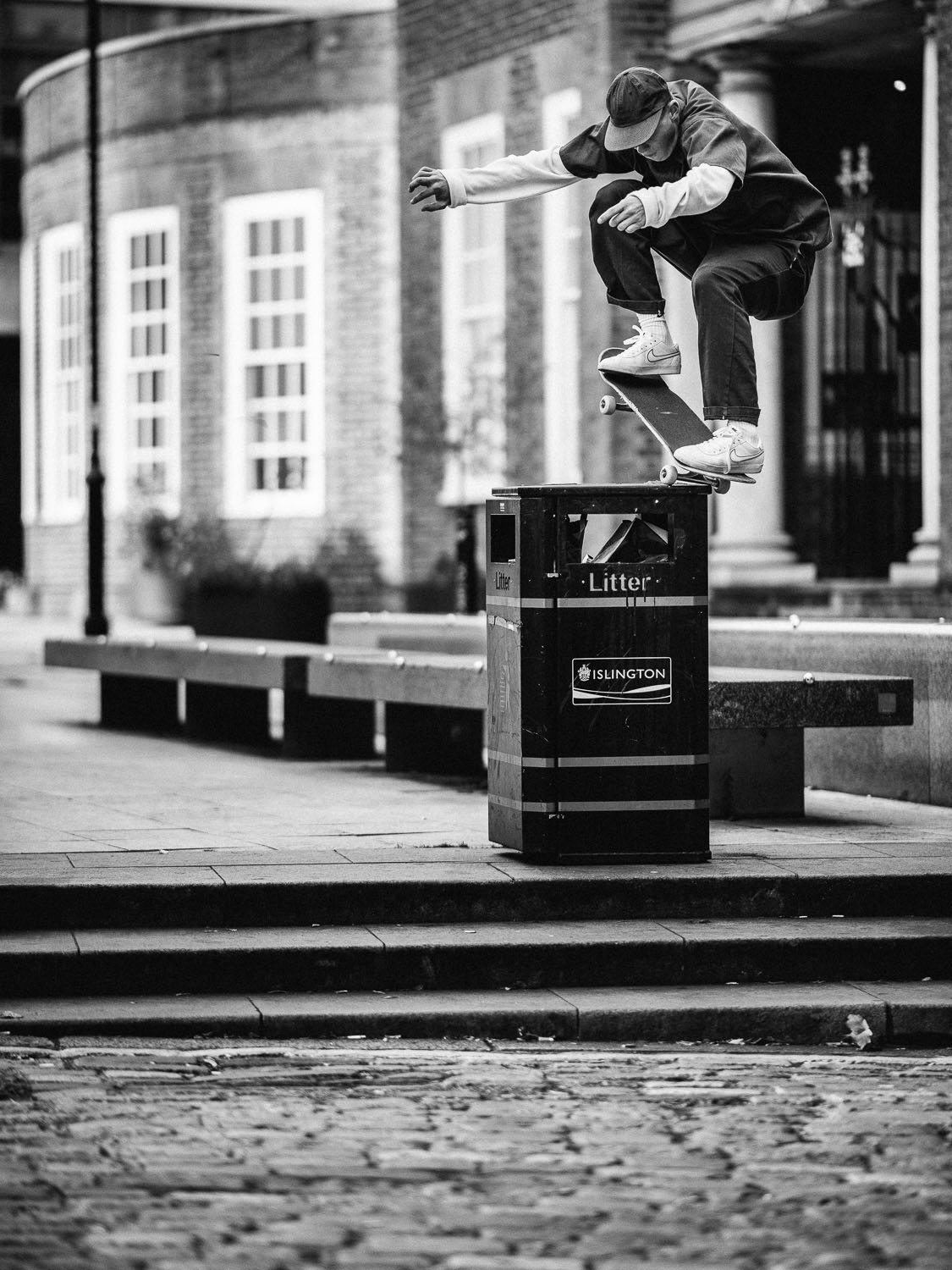 Hugo Boserup, frontside nosegrind
‘This ground is terrible!’ laughed Hugo as he peeled himself off the floor. He’s very perceptive. This was seconds after he was projected forward on the first ollie he did to test the water. Somehow five minutes later he was gliding through those cobbles like he’d grown up skating on Coronation Street. 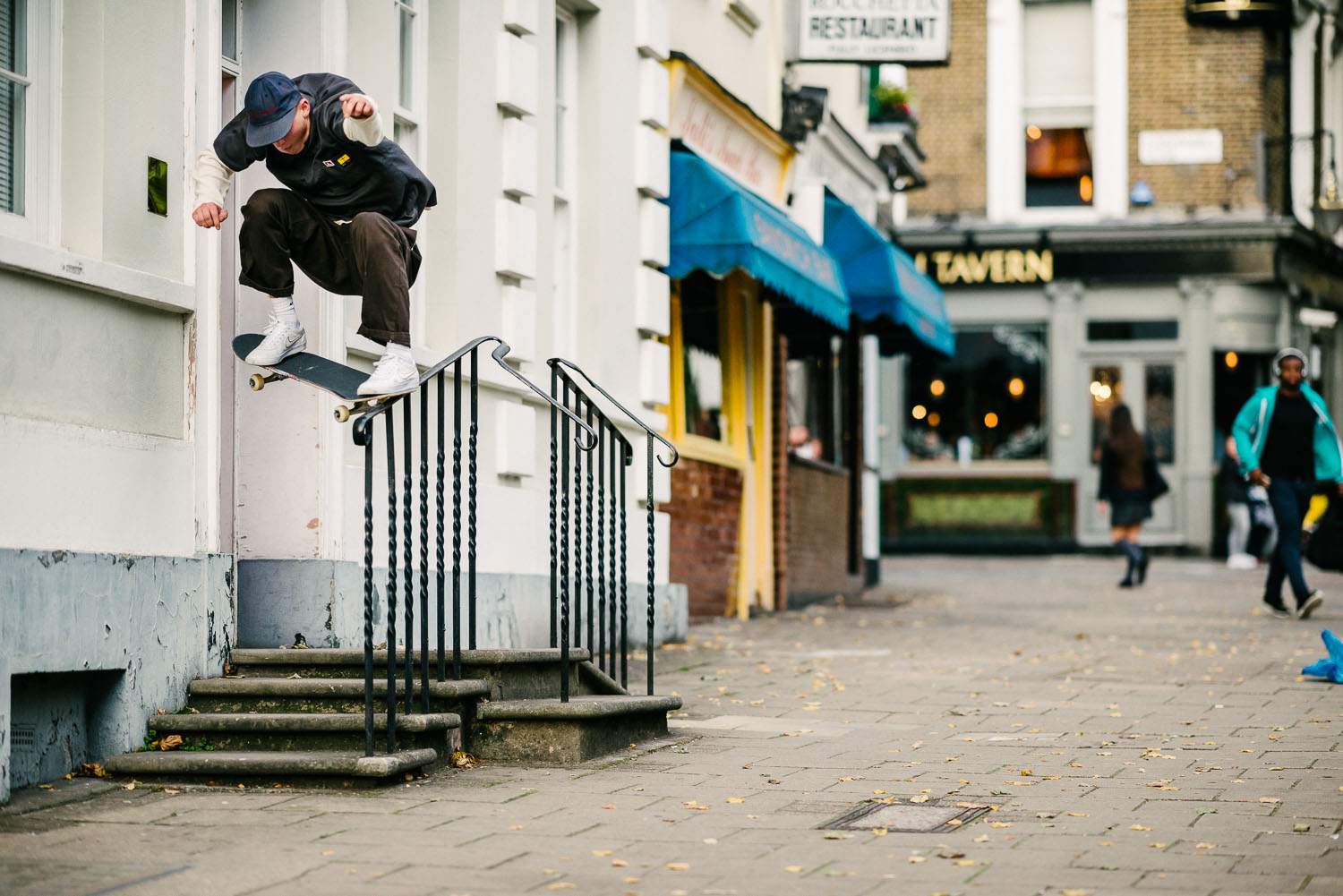 Hugo Boserup, noseslide
He did this one ten minutes after the previous nosegrind and it took him about five tries. After this trip Nik was going back to his set building job in New York and Hugo to building skateparks. Hugo had been off work for almost two months, just travelling and skating: ‘I’m a bit scared; I can tell I’ve lost a lot of muscle…’ Maybe the thought of going back to the 12-hour shifts working concrete in the freezing Danish winter had something to do with how hard he was charging. 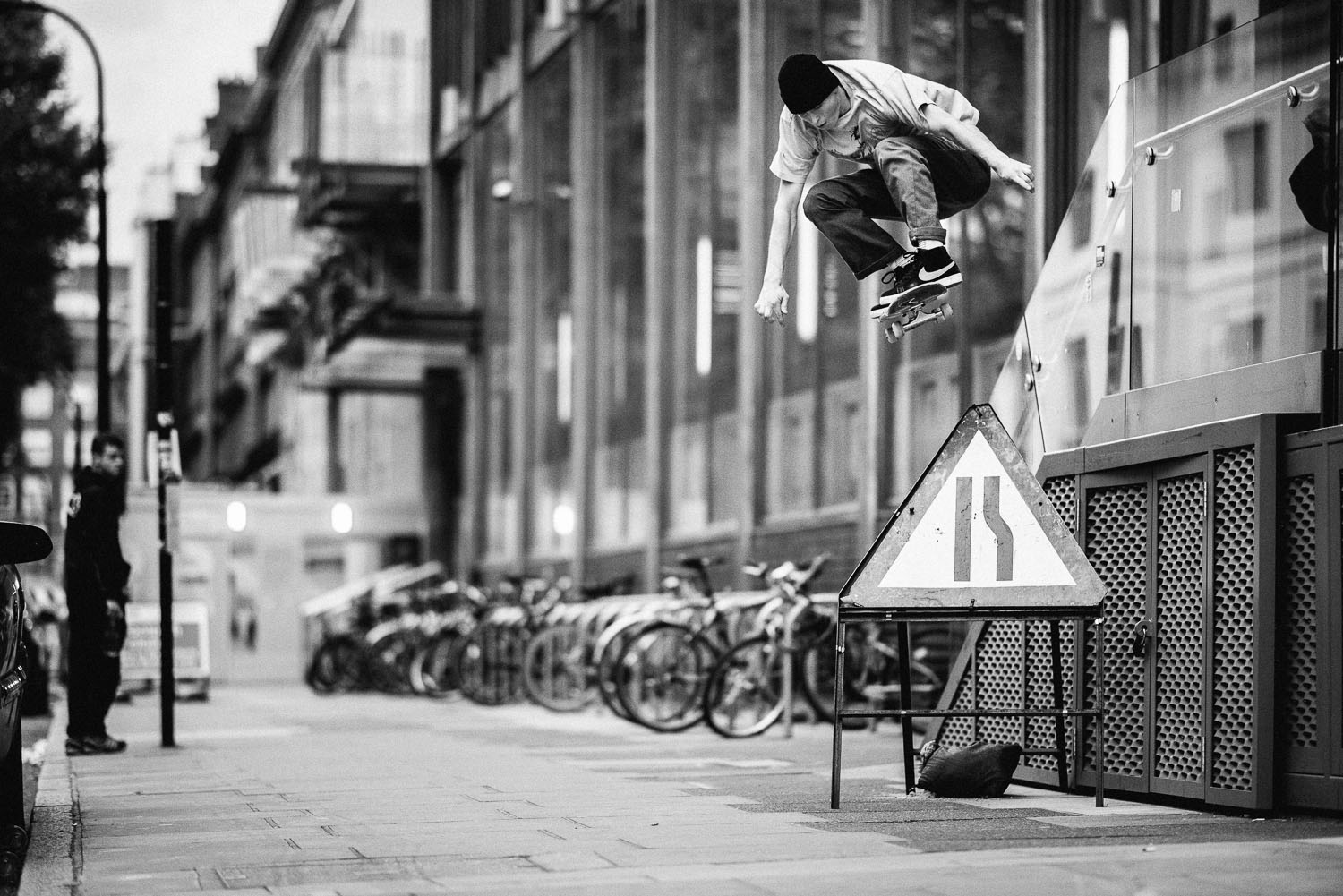 Hugo Boserup, 50–50 to ollie over the sign
Like Nik, Hugo’s one of those guys that only has one speed — the one that makes him skate like he’s just been shot out of a cannon. He was hitting this thing so fast that the only option he really had was to fly out of the grind as if he was skating a kicker — which is mental considering most people struggle to even make it to the top. 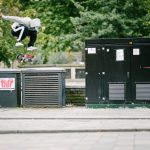 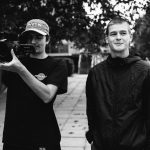 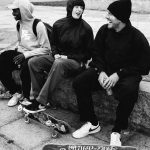 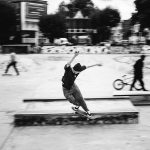