Opinion: Street League is not Free 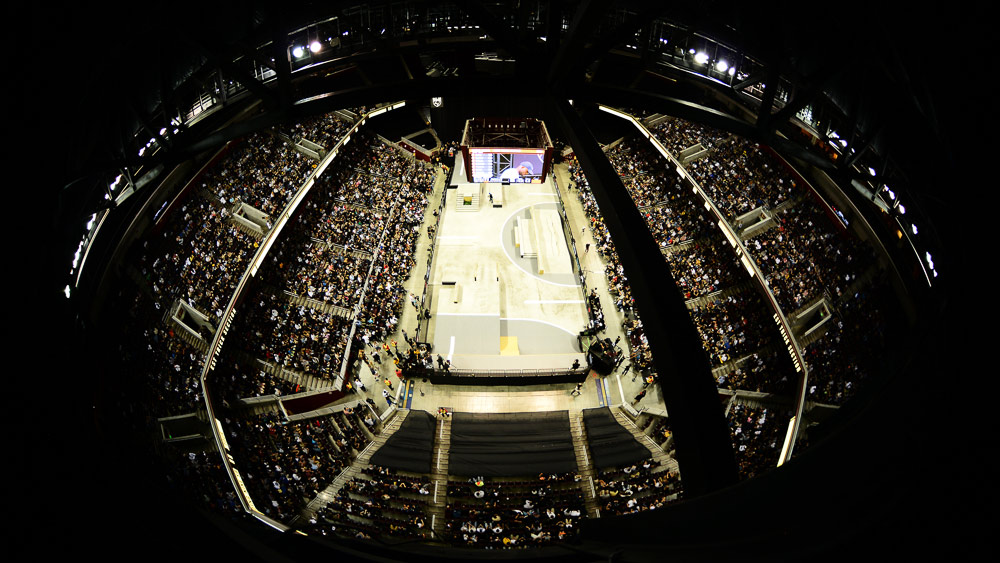 Street League is not Free

It’s hard to say what stinks most about Street League. Above all there’s a sense that the freedoms we know and love about skateboarding have been traded for something different, something shackled and rotten. As the SLS caravan arrives in London we get a foretaste of how Olympic ideals translate into commercial deals, principles become profits and cultural capital is used to hoodwink the powerful and fleece the public of the thing they made and cherish the most.

Street League is not free, as in beer.

It comes with a heavy cost. The Olympic Park is run by the London Legacy Development Corporation – a Government quango set up to make this public space run like a private one. Their Chief Executive Lyn Garner wants to ensure “local people have access” to skateboarding in the official SLS press release.

It turns out well over a third of those local people – from Hackney, Tower Hamlets and Newham – actually live below the poverty line. They can’t afford rent or to eat healthily.

Yet all-day prices for the SLS Pro Open London on Sunday total £84, more than twice that of Barcelona SLS last May (which unlike London had a free practice day). In fact these skateboarding tickets are more expensive than any comparable seat at any forthcoming event at the Copperbox Arena including e-sports, netball and basketball. What kind of access for local people is this when a day ticket to watch skateboarding costs more than a week’s Job Seeker’s Allowance to live on?

Street League is not free, as in speech.

Street League’s official partners are a rogue’s gallery of corporations largely ill-suited to have any credible say in skateboarding. Yet their dollars buy influence.

Monster Energy – a corporation profiting off drinks so toxic the NHS warn against consumption and you have to be aged 16 to purchase – is I’m sure delighted to associate themselves with one of the last-remaining credible youth cultures. Particularly when their own work culture appears so misogynistic they currently face at least six lawsuits for sexual discrimination and other issues. Sponsoring skate events makes Monster look good amongst their target market and last year helped generate $3.4 billion in sales. It’s Ferraris for dentists all round. By the way, how many skateparks have they built with that money?

What are you carrying?

Not actually a greeting from one London gang member to another, #whatareyoucarrying is the official hashtag of one of Street League’s partners, Kershaw Knives. Odd you might think, marketing knives to teenagers. Odder still, marketing knives to teenagers in London during a knife crime epidemic. Oddest of all? Quietly removing the name of Kershaw Knives from the SLS partners webpage just before the London event. Really? Claiming it was only included in error (it’s been there well over a year), while Kershaw still hold sponsorship rights? Priceless.

We can only assume Mayor Khan would love to meet Kershaw’s marketing executives to discover how they can help make knives look more cool, I mean support his desperate attempts to tackle knife crime. #WhatAreyouCarrying they ask. “To be crystal-clear it is not acceptable to carry a weapon.” he replies…

The cumulative effect of having these and other sponsors is that SLS are obliged to keep these companies happy. Sponsors have power over organisations by default, and when such people have even a small say in how skateboarding is presented to the world, it’s time to do something about it.

The highly controlled list of skateboarders, the supporting media, peripheral contractors, Skateboard England, the LLDC, the Mayor’s office, are all implicated. They all condone this bizarre corporate representation of skateboarding, their hypocrisy is gutless, their lack of political stance not just cowardice, their silence is violence against the freedoms we hold dear.

The violence is physical too.

Wickside was a cherished DIY spot that emerged right next to the Copperbox Arena in the last couple of years, taking off as nearby Frontside Gardens Skatepark was demolished by developers. The abandoned space at Wickside saw concrete ramps and blocks take shape, attracting local skateboarders and providing an ad hoc community hub at the weekends. A dysfunctional, empty space was turning into a cared-for environment with numerous positive effects.

In December 2017 contractors instructed by the LLDC bulldozed the skate spot without notice or discussion. No doubt while in advanced negotiations with SLS about this very competition. The rubble was swept away and security guards stepped up their monitoring.

Congrats to the hypocritical Olympic authorities @queenelizabetholympicpark for wilful destruction of a community-led skate spot. You miserly bulldozing no doubt cost 10X what it cost to build this grass roots facility serving local youth. Your profit-driven real estate objectives are poorly masked by the veneer of pretending to serve locals via the Clarnico Quay project, a sham disguised as an opportunity made only to divert attention from the imminent property development. Finally, ban skateboarding and then stick snowboarding on your social feed. Oof. Hope you can sleep well. RIP #wickside #olympics #olympicskateboarding #queenelizabetholympicpark #queenelizabethpark #banskateboarding #hackneywick #makeshift

SLS founder Rob Dyrdek’s treason is to try and make all of this seem acceptable. To make you pay for your own silence with flashing scoreboards and slow motion replays, with podium girls and buckets of energy drink. To feign emotion for entertainment. To pay your heroes so much cash that in their short and volatile careers they are left with little option but to take the money and run. To take enough cash from you that he can do the same, while gaining power en route to Tokyo 2020 where a skateboarding we barely recognise will be presented to 4 billion viewers.

Meanwhile local people cannot afford to attend this event, local skateboarders have their much-loved spot destroyed, the mayor is deceived and a monstrous caravan of corporate greed descends on once-public land to rob a generation’s pocket money while rotting their teeth and stabbing them in the back.

So, Street League is neither gratis or libre. These two concepts of freedom (exemplified by beer that costs nothing and speech without restriction) underpin the core of skateboarding’s playful and innovative culture. Instead, Street League betrays us, at our own cost, for a toxic regimen.

What can you do?

You can skate, that’s what. Skate how and where you want. Reject SLS, the Olympic park is full of spots. Let’s take this hollow welcome from the LLDC and practice our Olympic sport on Olympic facilities. Let’s reclaim Wickside. Take a look at this map to see some of the many other local spots you can skate this weekend and beyond.

All of them are free. As in beer, and as in speech.