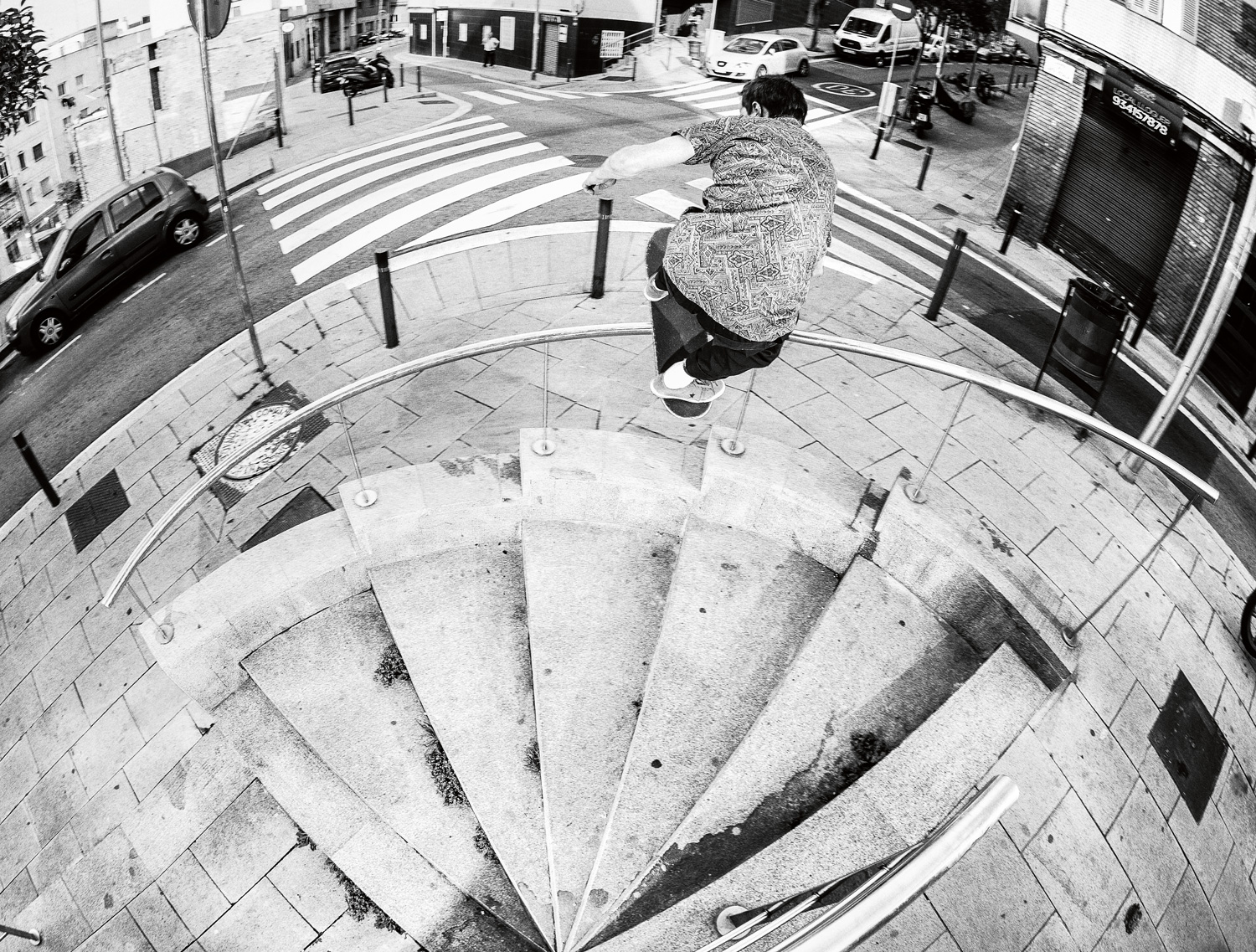 All photos in Barcelona by Roger Ferrero
Words by Arthur Derrien

Fred had always been a bit of an enigma.
On the one hand he’s as loose as they get and you regularly hear stories of him doing all sorts of sketchy shit. Like showing up in Copenhagen without a plan and ending up sleeping under the bowl in Christiania. Or going all the way to Portugal to buy a van for 80 Euros in hope of driving it back to Barcelona to live in it, which to his defence, he probably could have pulled off if he’d taken into account how much the MOT was going to cost. And maybe that it would mean boying off showers and having to go back to a tiny van after sweating his arse off at MACBA in the middle of summer… The one where he pulled what he thought was a kebab out from a bin (thinking he’d come up on some free dinner), only to realise he was actually holding a freshly used nappy is also a personal favourite.
On the other hand, about three minutes into your first conversation with the guy you realise you’d have a hard time calling him a wasteman by any stretch of the word.
For starters, he speaks three languages. French: he’s originally from Pompignac, a tiny vineyard town just outside of Bordeaux. Spanish: his mum’s Spanish and he currently lives in Barcelona (he’s got the dual nationality). English: I guess he just put the time in. And when I say ‘speaks’, I mean fluently enough to score roles in all three languages. Because yeah that’s another thing we recently discovered about Fred: his acting. He’s been regularly attending French and Spanish theatre schools and he speaks about it with as much passion as when he comes across a new species of handrail (but we’ll get to that later). ‘I’ve been going almost every day for a good few hours after skating, it’s been really good for me, it’s very therapeutic. And weirdly I’ve been finding similarities between the stuff I work on in those classes and skating. A lot of it has it has to do with rhythm and having a good sense of direction. Or even the way you understand your surroundings… Like feeling the intensity of a scene and being able to pick the perfect moment to step in with your line. That moment somehow sort of feels like figuring out where/when to pop at a tricky spot. The fact that you can practise it freely and that creativity is encouraged… That it’s one of those things that the more you do, the more you enjoy as it’s all about confidence…’ So if you ever wondered how he gets by whilst seemingly being out skating everyday, there’s your answer. He’s killing it with the acting and there’s an agency that’s been hooking him up with small roles in films and bits for various adverts. So it’s good money (that he excels at making last) and not something that he has to do everyday: the ideal setup for someone trying to skate as much as possible. 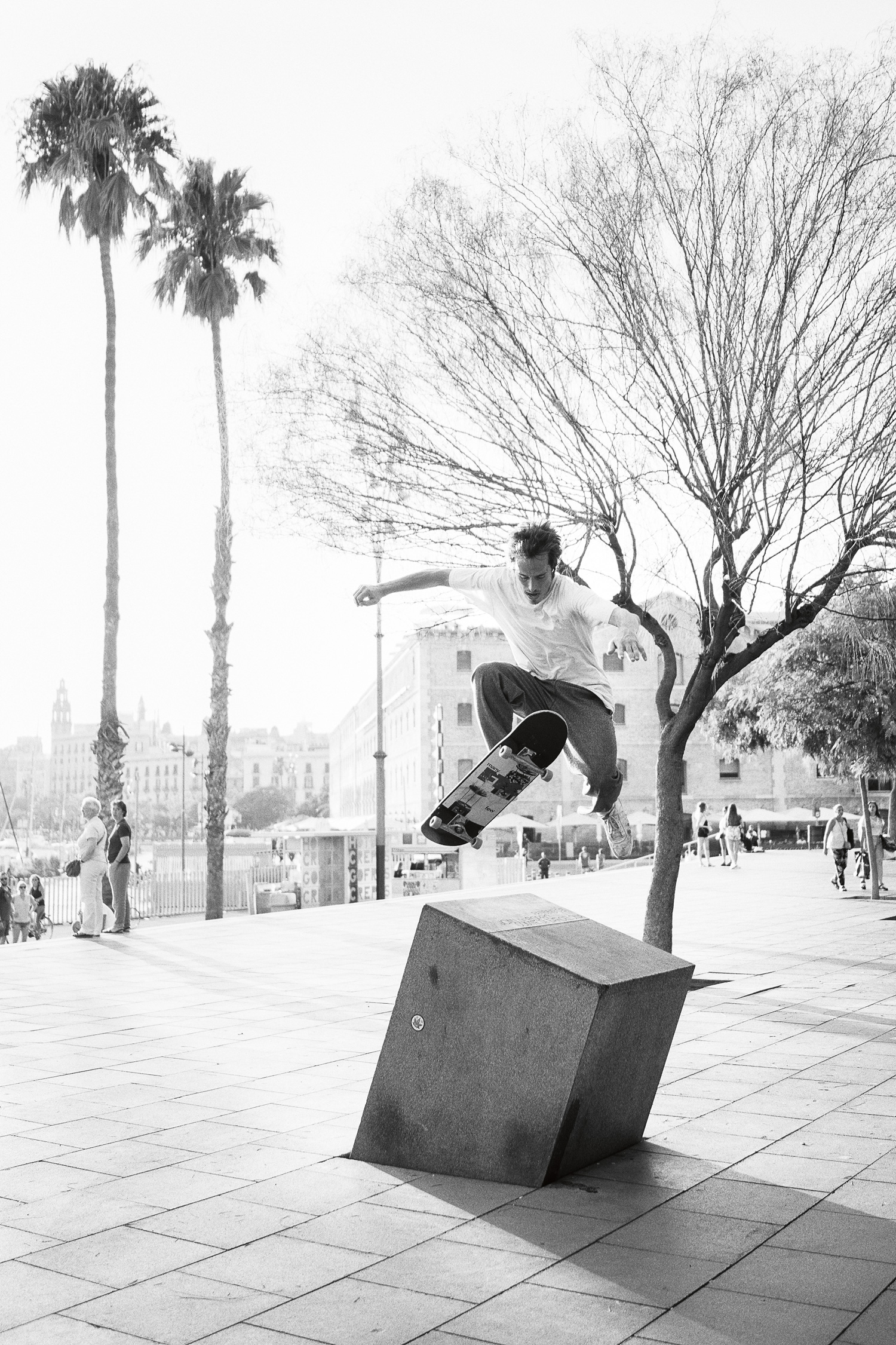 Another thing I just discovered is that he also secretly has a degree in Economics as well as a diploma in Physics/Chemistry. So if he’s living this Catalan bohemian dream, it’s fully out of choice. He studied hard then decided he wanted to give skating a proper shot and live slightly differently, which isn’t quite the same as washing up in Barci after too many Plaça Reial benders.
The other obvious danger with the Spanish skate Mecca is of course becoming complacent. Endless smooth granite and ‘perfect blues’ has a funny way of doing that to people… Fred not only resisted that trap, but also reinvigorated the ever-expanding FTC/Free Wifi/Gronze crew. With Max Géronzi on Google Maps duty and himself on foot patrol, they’ve imposed a new spot-hunting regime. No more melting at plazas, pins are militantly dropped in every corner of the city and its neighbouring towns, and everyone that jumps in the car for the weekend missions stays on the lookout at all times. And although everyone’s in it together, Fred’s unquenchable thirst for bizarre handrails is obviously one of the things fuelling the operation. ‘Rails? Yeah they’re a bit of an obsession, ha ha. I really want to find twisted ones, like proper spiral ones… I love spiky ones too. Even super short ones can be fun! I also love skating ones in places you wouldn’t expect, like shopping malls for instance – and if there’s a random person standing there confused, even better. It’s harmless and there’s something quite enjoyable about shocking them in their routine.’ According to his calculations he would have approximately hit 200 this year. A figure, which after close inspection of his Instagram (which by the way is INCREDIBLE), seems like it could actually be quite accurate. 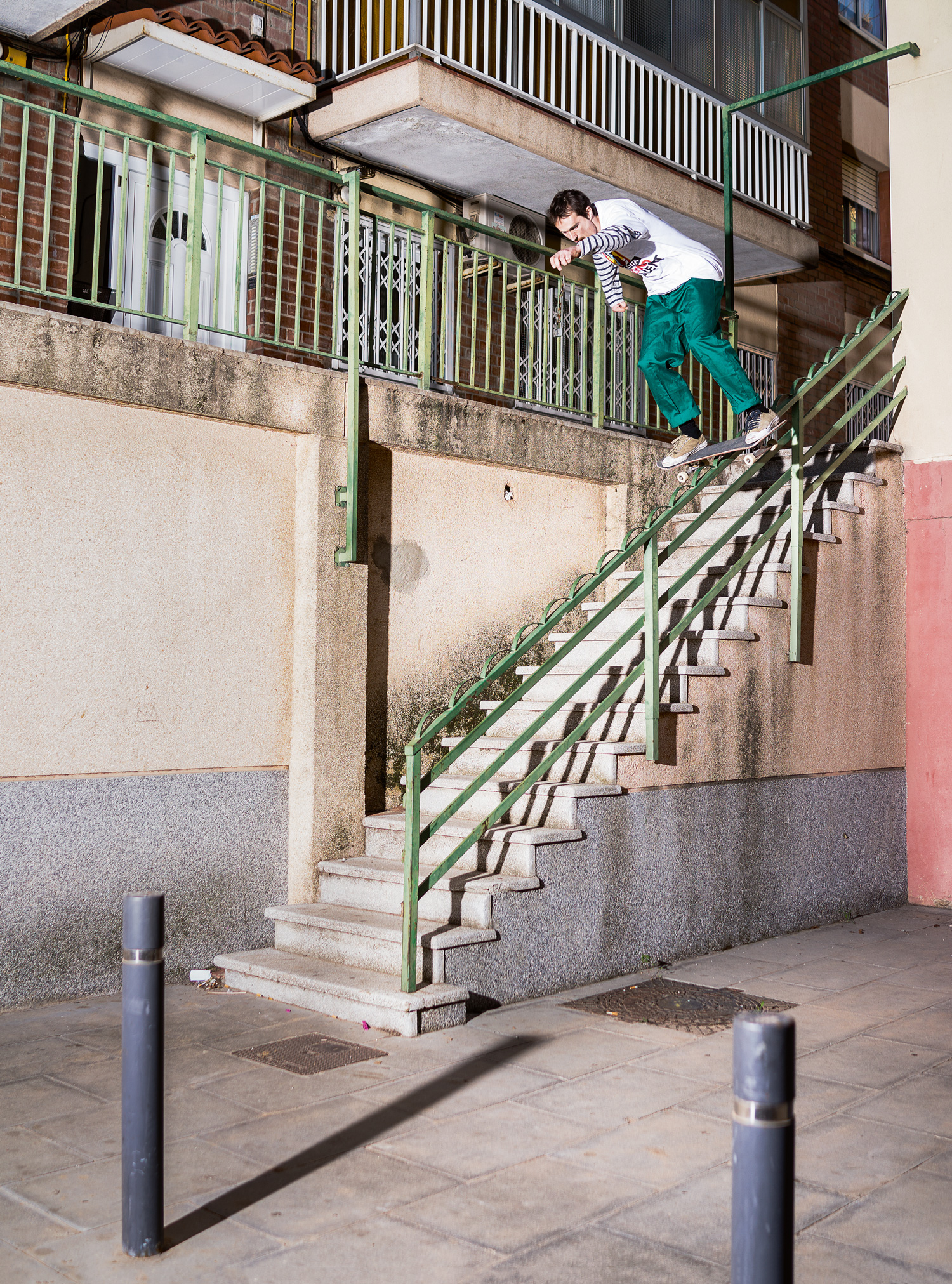 I also wouldn’t be doing Fred justice if I didn’t mention his appetite for travelling. Obviously everyone likes to go on trips, especially skaters, but his approach is rather unconventionally ‘brave’. He’s literally up for anything. I’m talking ten days in Siberia following a random skate camp around with 300 Russian skaters he’s never met kind of ‘brave’. Or solo exploring sketchy parts of Tijuana (after having been instructed not to go alone), that sort of thing. Which in that particular case didn’t really work out so well for him: ‘Yeah I got fucked over pretty good out there. To be honest I wasn’t really as careful as I’d been told to be though. I guess I just really wanted to get a good feel for the place… Anyway so basically I met a girl who I ended up chatting to and getting along with really well. After half an hour or something, she invited me to her mum’s to play video games. Pretty random but I thought why not? It felt genuine and we’d been chatting for long enough to be past the point of thinking she might rob me or something. Obviously I was completely wrong, and the second we met her mum two dudes jumped out of nowhere, one went for my neck while the other kick-boxed the shit out of me. It was pretty brutal. What shocked me the most was that the woman really looked like she was her mum… Like I’m convinced the mum was just in on the scam. Which is kind of gnarly… Anyway then I managed to get a taxi back to the border but since they’d basically taken everything I had on me (which wasn’t much) I ended up being held there for ages. It wasn’t great.’ 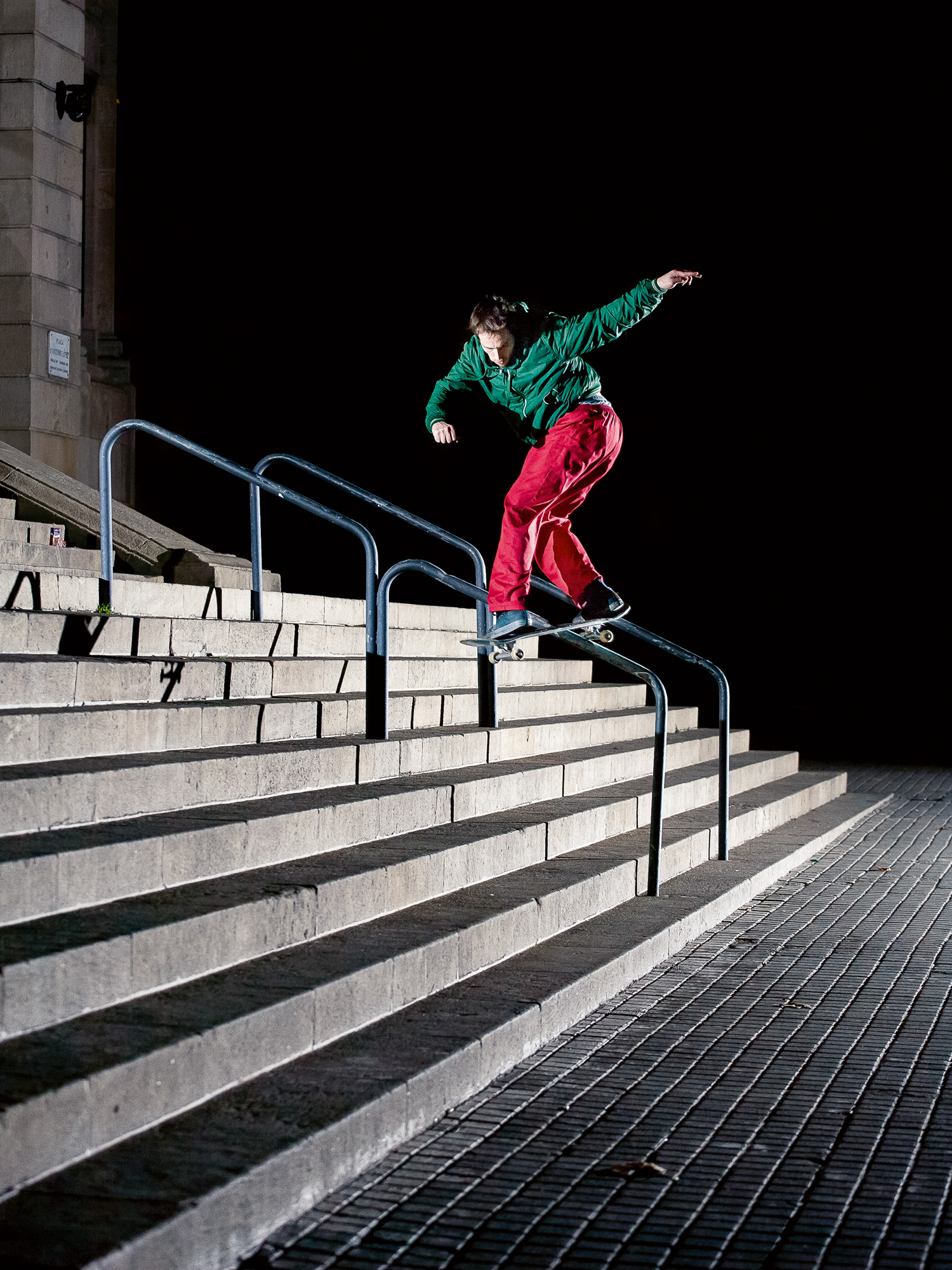 Finally after Fred the artist, Fred the scholar, Fred the handrail worshipper and Fred the traveller, I’d like to introduce you to the most unexpected of all: Fred the entrepreneur. From speaking to him about his passion for orange I sort of figured he had a heightened sensitivity when it came to colours: ‘Orange? I love the way it works with black… That it symbolises sunrise and sunset… And how their light makes everything look.’ And I guess he’s never been one to shy away from wild items of clothing, but him getting into the ‘trouser business’ is certainly not something we saw coming. The basic idea behind his venture (Yé) is to source elasticated work-wear bottoms and slightly alter them. ‘If you’re a cook or a plumber you need quality clothing. You need what you wear to be super-resistant but also loose and light enough to move around as freely as possible. Just like in skating, you don’t want to feel constrained. I go to markets and factories to bulk buy the best possible work trousers and personalise them. Like I slightly adjust the fit or add a stripe or a lace at the bottom to tighten them, that sort of thing. It’s still early days but I’m hoping to get them into shops and stuff…’
The boy’s as versatile as he is unpredictable (both on and off his board) so rather than go on forever we’ll say this: if you come across a guy in flashy trou front boarding a weird shaped handrail somewhere unexpected – and you probably will at some point because he seems to be everywhere – wait ‘til he’s done then buy him a pint. I guarantee the chat that’ll ensue will be even more entertaining than what you’ll have just witnessed.

Click through the gallery for more Fred photos from the mag: 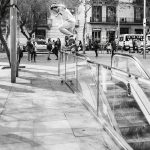 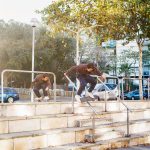 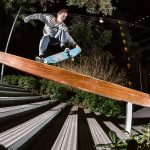 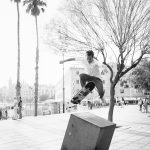