One of the most memorable moments from Pushing Boarders earlier this month was M Dabbadie’s speech at the  ‘Not just some homogenised bullshit’: Skateboarding and the Gender-Identity Evolution lecture. After the talk we spoke with M and mutually decided it would benefit all if we published the speech in full on our website.

Hi, my name is M.
My pronouns are they/them/their.

I am a transgender person, a photographer, a skateboarder, a writer and a zine maker. I define as non-binary genderqueer, which means I don’t identify with neither male or female. I have been skating for over 10 years and have been a part of the female skate scene for most of these years as it was the closest I could identify with. I have been documenting the female skate scene extensively for many years and I am still fascinated with its progress – more and more high ranked female skateboarders are getting sponsored by bigger brands and getting the visibility they always deserved. This wouldn’t have happened without female key players like Hoopla, Rogue Skateboards and Meow Skateboards working really hard to support the female skate scene professionally when no one else was. The female skate scene inspired me and made me feel safe in the skate community but it never quite felt right on the personal level. I always had issues identifying myself with a woman.

When I moved to Malmö in 2015, I started to understand myself in ways I didn’t before. Moving to Malmö was like getting the keys to a whole new world, a world where my identity could grow freely. I dived in the queer scene outside of the skate world and started to understand my own identity better. Being in the queer scene and exchanging with queer individuals, I discovered new identities I could identify with. I never really felt like a gendered person at all and called myself androgynous and identified with they gay community as only resource, but it never really felt right. I had no idea many more words existed to express my identity. Getting to know these words helped legitimise my identity and my overall existence in the world as a non gendered individual. But at first, I kept this identity out of the picture when skateboarding. I didn’t think skateboarding was ready for it. I felt anger towards the skate scene many times and often wondered if I should quit. Do I want to be a part of this overly macho culture? Do I want to use my personal resources for something that seems so hard to change?

Skateboarding, like society, has always been a binary practice dividing male and female and the idea of explaining my identity at every session felt like a struggle that would take the fun out of it. But when I met two other genderqueer skateboarders, Emil and Leio, I realized I wasn’t the only gender non-conforming person in the skate scene. It pushed me to use my voice, my visibility and my reach in the skateboard community to educate people about queer topics and it gave me the necessary hope and energy to start working towards making skateboarding a safe and queer inclusive space.

I founded Xem Skaters, a genderqueer skate zine two years ago to support photos of Emil and Leio I was exhibiting in London during the Unicorn Skate Jam. I wanted people to understand why I was exhibiting these photos. They were my first step towards giving visibility to genderqueer people in the skate scene. Xem Skaters came out of the desire to make skateboarding more inclusive and ready to understand queer identities but also out a personal need for my own sustainability in the skate world. I also wanted to publish the kind of information I would have needed earlier in my life to better cope with my own identity. And I thought: ‘why not create my own skate queer community?’. If we were three in Sweden, there might be more in the world. So I wrote a call for submissions and shared it with all girl skate medias and networks I could think of. I was first hesitant to the success of the zine. At the time, I did some research about queer and trans skaters and could only find Hillary Thompson’s interview in Jenkem Mag and a podcast about Jamie Peralta, a genderqueer skater from New York. But I soon started to receive more and more interest, submissions and messages from queer people in the skate community worldwide. Three issues filled with queer skating material later, I realise how my zine was needed and became a tool to create and support a counter-culture to skateboarding, the queer skate community.

One of my goals with Xem Skaters is to feature different identities and to give a voice to people with different narratives in order to create more diverse role models and encourage more individual identity building within skateboarding.

I’ve lost interest in main medias for skateboarding long time ago as I felt like they did not represent my way of skateboarding and the people I skated with. Just look at Thrasher’s website front page and try count how many non cis-male people are represented. Or pick up any widely distributed magazines and do the same thing. To survive in the world, you need to surround yourself with people and things that matter to you and make you feel safe. And to survive in the skate world, I felt like I needed to protect myself from the mainstream views of skateboarding. The overall representation of skateboarding didn’t and still doesn’t make me feel safe. Women in skateboarding, as in society have been and are still objectified. Naked women printed on skateboards, transgender imageries used as jokes, the monster girls delivering trophees at competitions, women asked to pose in videos, king of the road challenges pushing skaters to harass women in the streets are just examples of how bad it is. Skateboarding, widely, is not respecting women and trans people.

When gender non conforming people or women are pushed to the front of main male dominated medias, the comment section is revolting. They reflect the ignorance about inclusivity of the overall crowd populating skateboarding. Skateboarders still claim to break norms and some male skaters complain about the need for safe spaces for women and queer people but the comment sections filled with sexualising, threatening, homophobic and transphobic comments clearly show why these safe spaces are needed.
Recently, I have been in contact with several individuals that quit skateboarding some years ago when they decided to transition. They felt like transitioning while being in a skate culture was too much and were afraid of bullying and mistreatment towards their transition. I know a lot of male skaters would say ‘I’m cool with that’ when talking about trans people for example but that’s not enough. We need male skaters to educate themselves and call each other out on a regular basis. We need allies.

But fortunately, right now women and queer people are creating their own countercultures and spaces in the skate scene instead of trying to fit and be a part of traditional male dominated picture. I call these counter-cultures because they are not reproducing skateboarding practices that encourage high performance, competition and often self-destruction but instead they create and display their own ways of skateboarding. Women and queer skaters have always been there but they have been widely under represented or misrepresented.

With the rise of social medias, more and more people can communicate and connect faster. This enables movements, organisations and brands like the Skate Witches, Unity Skateboarding, Doyenne skateboards, The Skate Kitchen, Pave The Way, Skate Like a Girl to strive and grow. These brands, organisations and movements are very positive and differentiate themselves from the male picture of skateboarding – they carry inclusivity and fun. They are inviting, welcoming, DIY and create safe spaces for people to meet and share. They encourage creativity. They educate and give visibility to non dominant experiences, they build and mobilise community. Women, queer and non-conforming skateboarders are pushing more and more social change and body positivity in the skateboard landscape. They also create new role models. Everyone can be a part of the club as long as they respect and embrace people’s differences.

I think that mains medias and brands should try to adapt to these powerful countercultures within skateboarding if they do want to represent skateboarding as it is now and keep claiming their subversivity.

Isn’t the rise of these women and queer-led subversive movements also symptomatic of the fact that skateboarding on the main medias and skateboarding icons are no longer representing skateboarders nor able to welcome diversity?

Skateboarding seems like a fruitful ground to integrate and carry social change because of its diversity and its radical aspects. It just needs to be more educated. I want skateboarders to question themselves as part of a radical movement and to educate themselves about their differences. Skateboarding is such a beautiful thing that gathers people from different backgrounds, and is a radical practice that reimagine cities, ways of life and transcends borders. But I think skateboarding has been resting on its ‘norm breaking’ status and has missed a couple of episodes when it comes to social change. Skateboarding is not actually breaking norms anymore but instead often perpetuating archaics of patriarchy and oppression. Toxic masculinity, better known as ‘the cool dude attitude’ can no longer define skateboarding.

However, I think that us, being here today is a sign of positive change. A couple solutions to the problems I mentioned during this talk include having more women queer stakeholders in skateboarding medias. I want to see more women and queer writers, photographers and filmers. This would ensure a better representation of diverse women and queer people in skateboard medias. We also need skateparks and skate organisations to allow and encourage safe spaces in skateparks. We can maybe consider introducing pronoun rounds like Skate Like a Girl at the beginning of women and queer sessions. And we also need more men to bring up awareness and use their visibility to educate and call each other out.

Lastly, I want to take the opportunity to have the microphone today to deliver a message to all girl session organisers. First, I want to thank you for your work and for creating safe spaces for people to learn how to skate and to meet. It is important and needed. Second, I’d like to ask you to consider opening the doors to your safe spaces to queer / trans / non-binary people expressively. And if you need guidance or have questions on how to do this, feel free to contact me, I’d love to help. 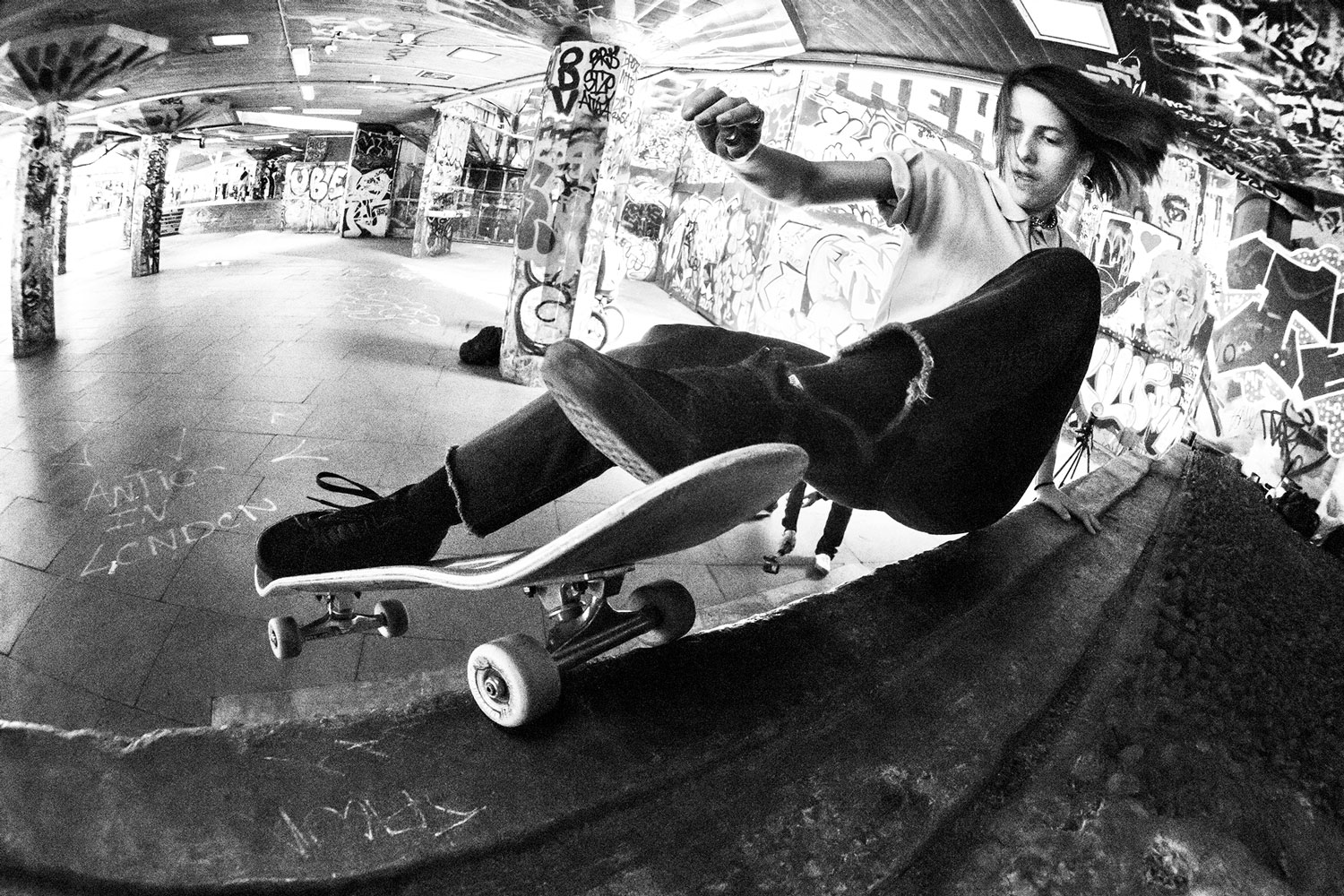 M’s questions for the readers:

Have you ever witnessed any kind of racist, sexist, homophobic, transphobic behaviors at your local skateparks? If so, what did you do about it? It’s time to check your privileges and take responsibility.

If skateboarding welcomed you when you felt like an outcast or a weirdo in the world, maybe it’s time to think on how you could make skateboarding more welcoming to other minorities.