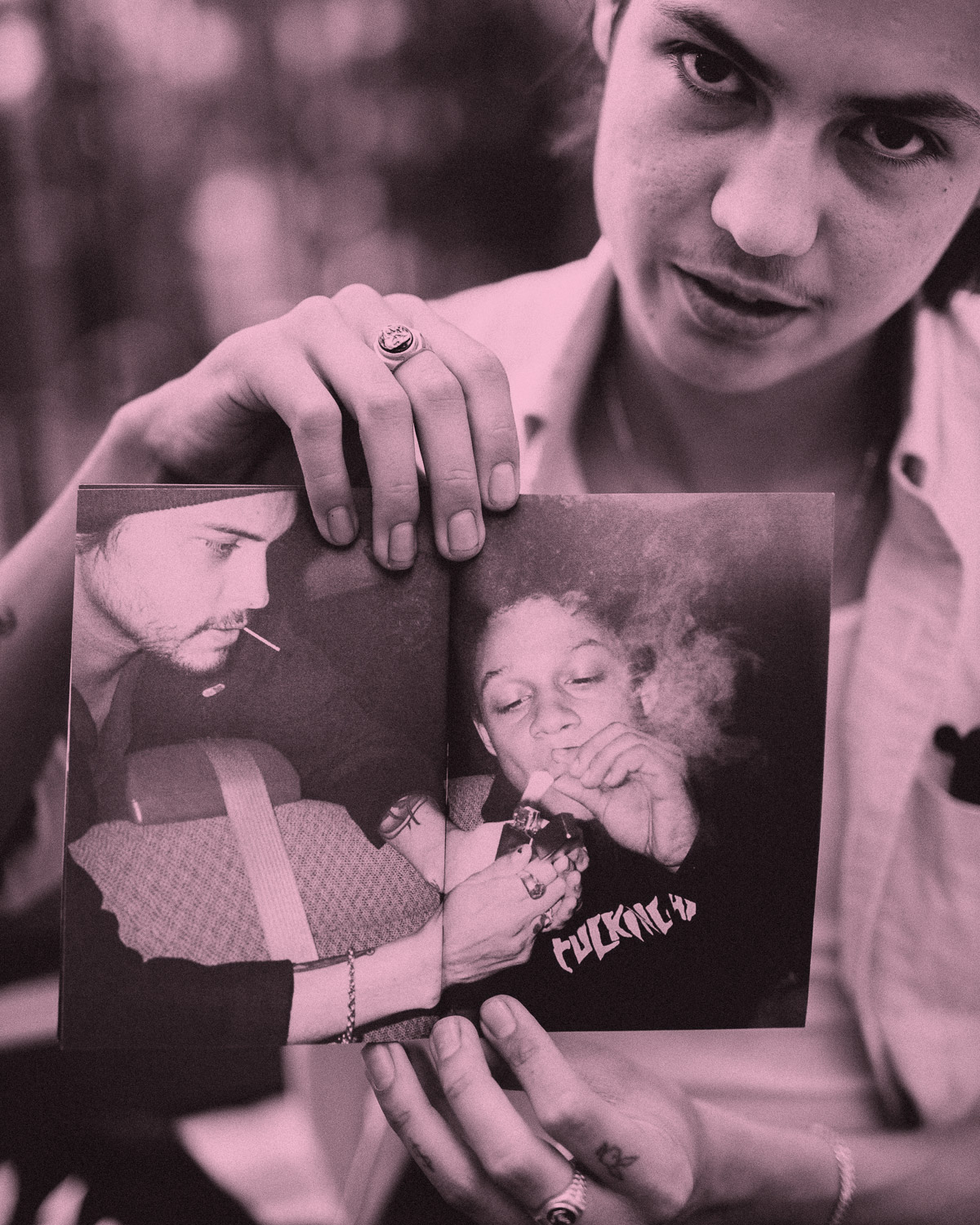 Sean and his new zine.

A few years ago Sean Pablo got the cover of our European magazine. He was the first American to get it and it was his first ever cover: it kind of felt like a big deal. Someone that was there when he got his hands on a copy later told me that he was stoked, but a bit disappointed that his first one wasn’t on an American mag. I remember thinking ‘how spoilt can you be? What’s he ever done other than those 5 tricks in Cherry? He’s lucky to be getting photos in any magazine!’ Basically I didn’t really ‘get’ Sean Pablo, and for a long time it stayed that way.

Now if you’re reading this it’s obviously that my opinion of the young man (and his skating) is now very different and this is mainly due to two specific events. The first was Sean’s one man demo at Canada Water before the Purple premiere. We all know how hard doing any kind of skateboarding is on straight-off-the-plane jelly legs, so think that but back to back long distance flights, a completely fucked up body clock and having to do it in front of a million people when nobody else on the team is skating. Yep pretty brave, and not quite in line with the word ‘spoilt’ I was so quick to associate to him. Yet for some reason, still, I had my reservations.

The other is meeting him in New York last weekend and being reminded that when Cherry came out he was 16. Going from being virtually unknown and never having put out a proper part, to being in a video with Dylan Rieder and Alex Olson that will be dissected and analysed by generation after generation of people that share the same passion as you is quite gnarly. I know whatever you do in skating makes you feel like you’re being looked at through a microscope but you have to admit being in the first Supreme video takes that to a whole new level. Interestingly though, Sean somehow managed to stay completely oblivious to all this…

‘I was so young and it was such a dream come true to be in a video with Dill and Gonz that I didn’t care or even really think about if people didn’t like my skating. How many people can say their childhood dream actually came true like that? That’s all that mattered to me.’

When asked if he pays attention to what people think about his skating now, the answer is more reluctant… ‘I try not to but as you grow older you’re more aware and it becomes harder to ignore’.

How does he cope? Staying focused. Which as of right now basically means finishing up the new Supreme video (that according to him should be out this winter). ‘This time around, trick-wise, it’s going to be crazy. It’ll basically be the same crew plus the Blobys, Rowan Zorilla and Nik Stain. We’ve been filming all over the world for the past two years and we’ve only got about a month left. We’ve done trips to Paris, Berlin, New York, LA, SF… We’ve been going to the Embarcadero loads!’

It was interesting to hear him get so excited by the resurgence of a spot that was in its prime almost 10 years before he was born. Especially when there’s so little of it actually left…

‘There’s not that much you can still skate but it looks so good and it’s such a legendary spot. You can basically go up the three, down the three and then there’s the fountain when it’s empty. But that’s almost kind of cooler, it means that you really have to think to come up with stuff to do. And we’ve all been watching the old stuff of Jovontae and Carroll… You know Bill and Dill are the biggest skate nerds.’

It was pretty obvious, even from their early footage, that Sean, Sage and their crew were quite heavily influenced by older videos. One thing I always wondered though was if this was a consequence of Bill (Strobeck) and (Jason) Dill ‘grooming’ (for lack of a better word) them or if it’s their common taste in tricks, spots and videos that brought them together.

‘We were actually always really into older videos. We watched stuff like the old Stereo videos or Video Days a lot before hanging out with those guys… If anything Aidan (Mackey) is the one that put us onto that stuff. I think Bill sort of saw that 90s influence in us and thought it was cool that we weren’t just into all the popular new shit. It was kind of like a rebirth of everything that was going on back then and I guess between all of us it just clicked’

And once it did ‘just click’ things went very, very fast. Kids around the world (and not just skateboarders) were seduced by everything they had going on and started to emulate them.

‘Dude I still find it crazy… Whenever I go to a signing or something there’s always kids completely decked out in Supreme with the painted fingernails and chucks… One skater at a demo even had exactly the same tattoos as me!  Like this cross, this money sign and then the rings, the painted nails… He looked exactly like me. I’m pretty sure he was older than me too!

What makes this Videoradio Muska or Piss Drunx style phenomenon so special though is that this time it actually transcends skating.

‘I think it’s cool that the videos we put out can also influence people that don’t skate. I guess the music in Bill’s videos is good and the characters are so wild that it can be enjoyed by anyone. You don’t have to be a skater to look at Ben (Kadow), Aidan or Kevin Bradley to be like ‘what the fuck, these kids look crazy’. This new one especially I think is going to feel like a full on movie. Bill really wants to outdo himself…’

Hearing him bring it back to this new video, I could tell this one was a particularly big deal for him. How was it any different to say Converse’s Purple though? Aaron Herrington stopped drinking over that one! ‘The main difference with Purple is that what went into my part is basically what I managed to get on those big trips. I’m stoked on how it came out but this one has been quite a different process, I’ve really been able to think about it… Like for the first time I’ve got a list of tricks that I’ve been going back to and trying for the past two years.’

Can we expect a full part from him? He has no idea, but he’s okay with that. ‘Bill never shows us any of the footage or tells us what he’s thinking. But I don’t care, I trust him. He’s knows what we like music-wise and there’s no way he’d fuck up.’

How are you supposed to control how you come across when you’re thrown into the deep end 16? And why should you bother? The conclusion to all this is that Sean is just a skate rat like everyone else, making tricks lists and watching old videos to get hyped to go out filming. That shoulder high rail he backlips at the end of Purple is a joke in real life and I really need to stop being so salty. 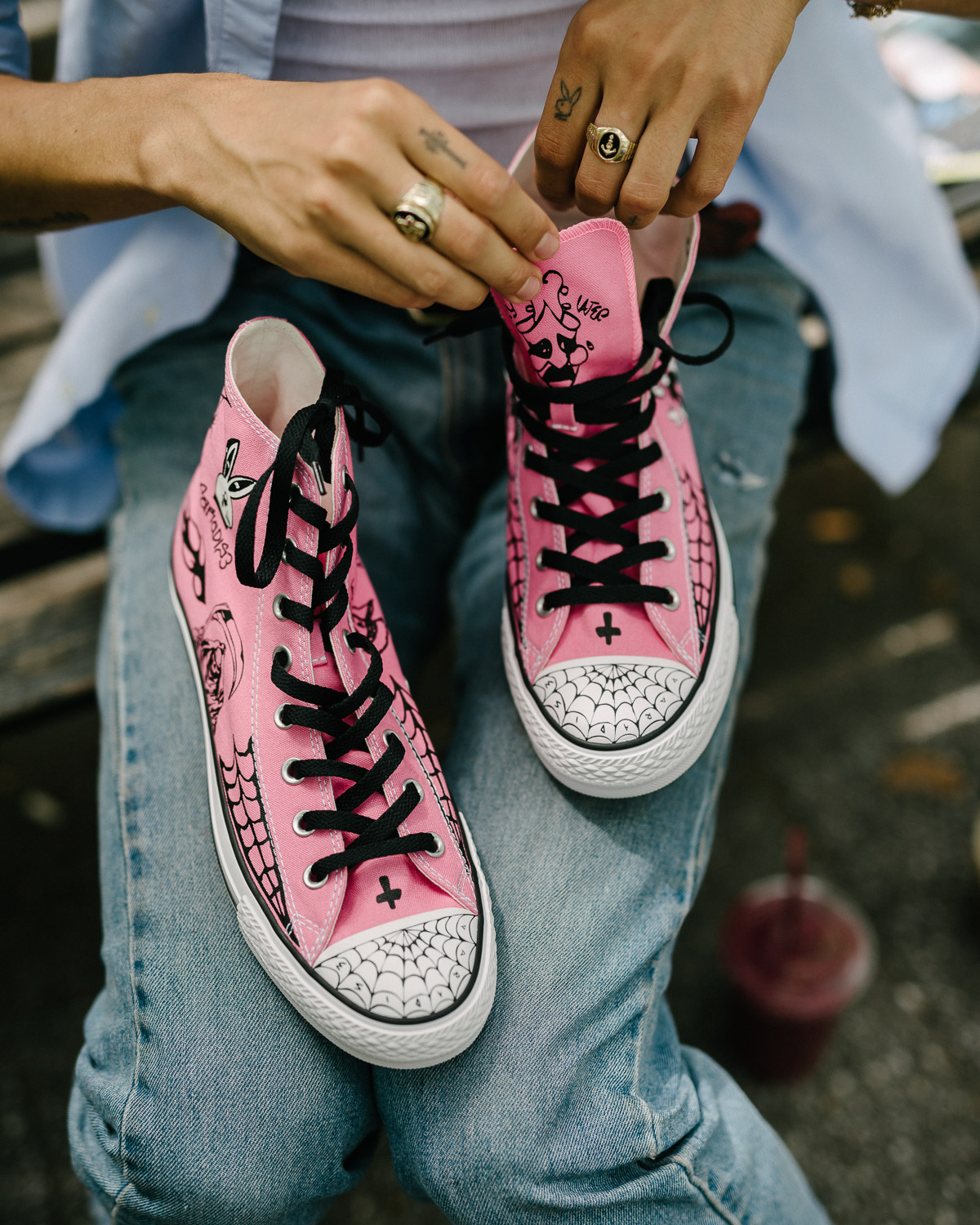 Click on the gallery below for Sam Ashley’s photos from this past weekend in NYC. 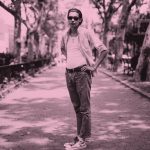 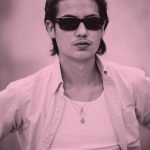 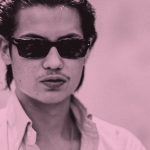 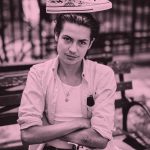