As skateboarders, we can become very consumed in our insular little
world. It’s easy to forget that we were once outsiders, staring mesmerised for the first time at some stranger blasting down the road.

During my time in Berlin, I decided to talk to passers-by who just happened to be in the same place as hundreds of screaming idiots on wheels. I wanted to find out what their deal was, and what they thought our deal was. Or whether they even thought us capable of having a deal at all.

I spent most of my time lost and on the periphery of timetabled events,
bouncing around just trying to keep up, but this was fine. I missed a whole bunch of skating, but some of the best conversations happen when on the periphery of things, and it was exactly where I wanted to be.

Read on for some insights into the minds of ‘ordinary people’. 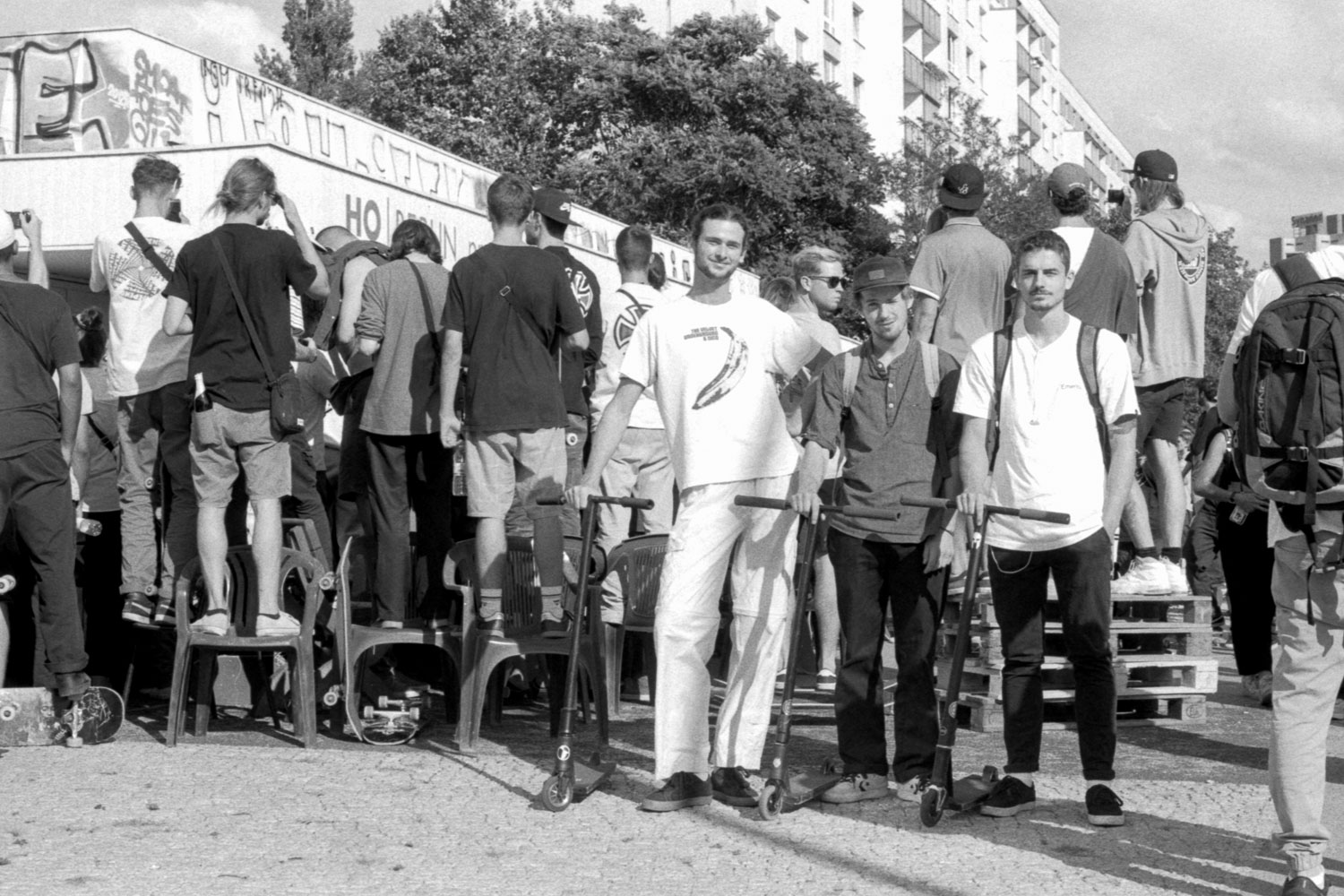 I spotted these three straight away, and went up and told them they were brave for being there due to the bitchy nature of skaters. After a short conversation I had learnt a few things, chief among them being that they film their scootering on VX. Who knew? When asked what they thought about the session, they gave the response ‘There’s a jump ramp onto the rail… that’s kinda wack’. I laughed, and then left.

Technically these guys aren’t completely ‘ordinary’, but I really had no choice but to include them. I checked them on Instagram later and saw that they make phone edits to trap music and wear camo pants. They would have no trouble fitting in with most contemporary skateboarders. 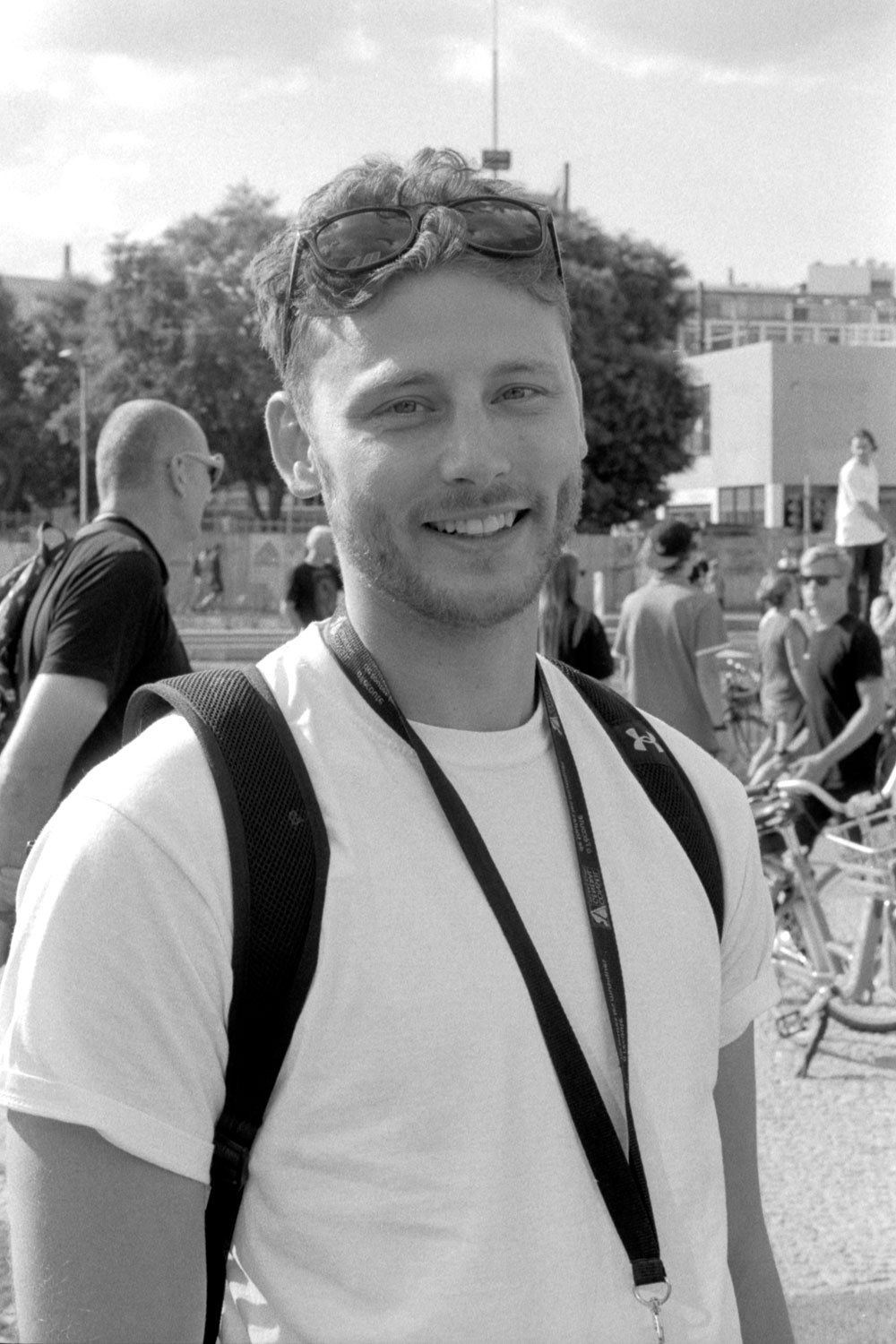 He said he used to skate when he was a kid, but hasn’t done it for about ten years. When asked his thoughts on the session, his response was ‘I can’t see’. This was something I became pretty familiar with over the coming days. 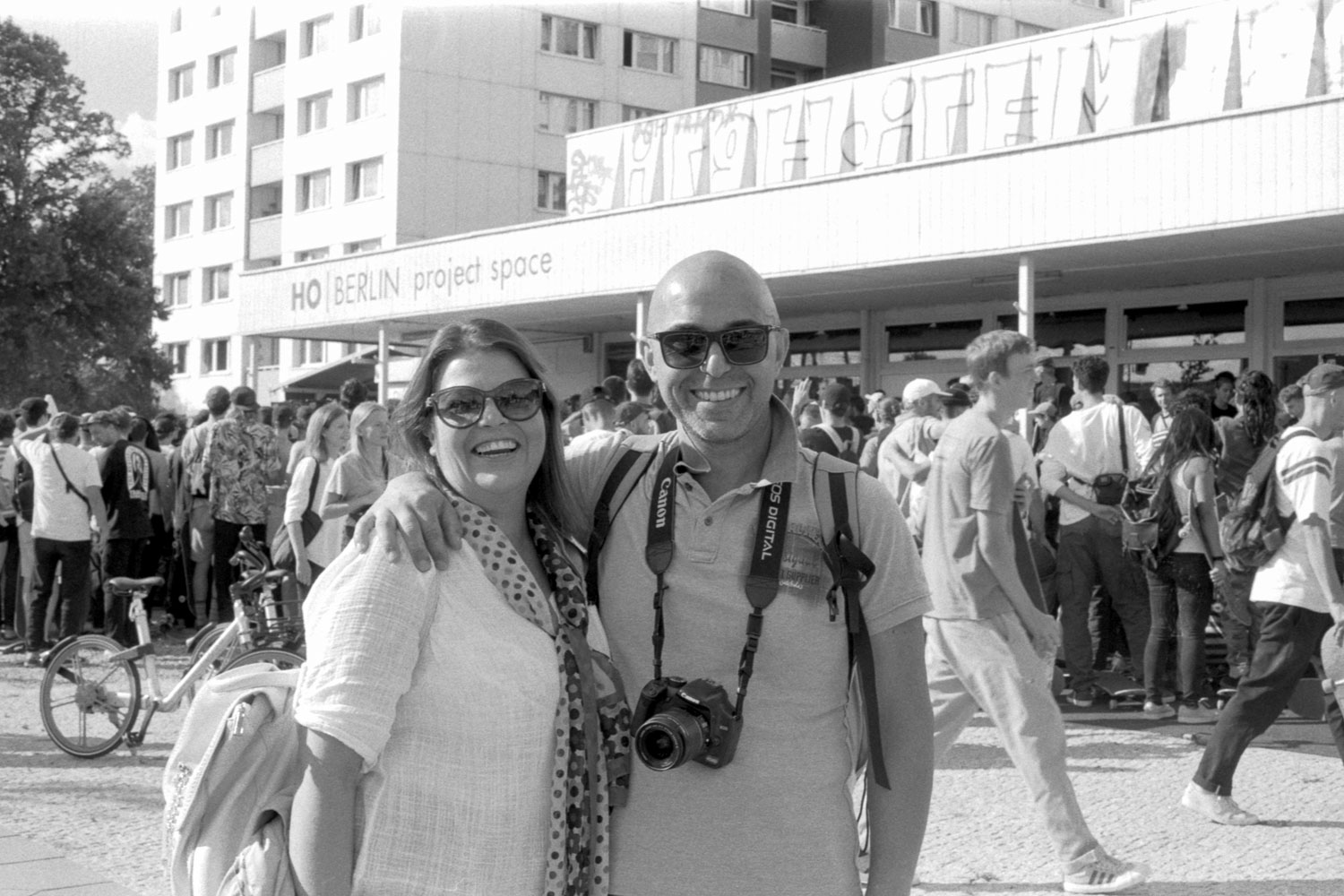 Laura was holding her phone above her head trying to get photos. I told her to elbow some of the skaters out of the way so she could have a closer look, but she said she had got what she needed already. They told me that this is the sort of thing that they expect to see in a city like Berlin, and seemed pretty happy about the whole experience.

4. Niels, Bjorn, and another guy who might have been called Mark. 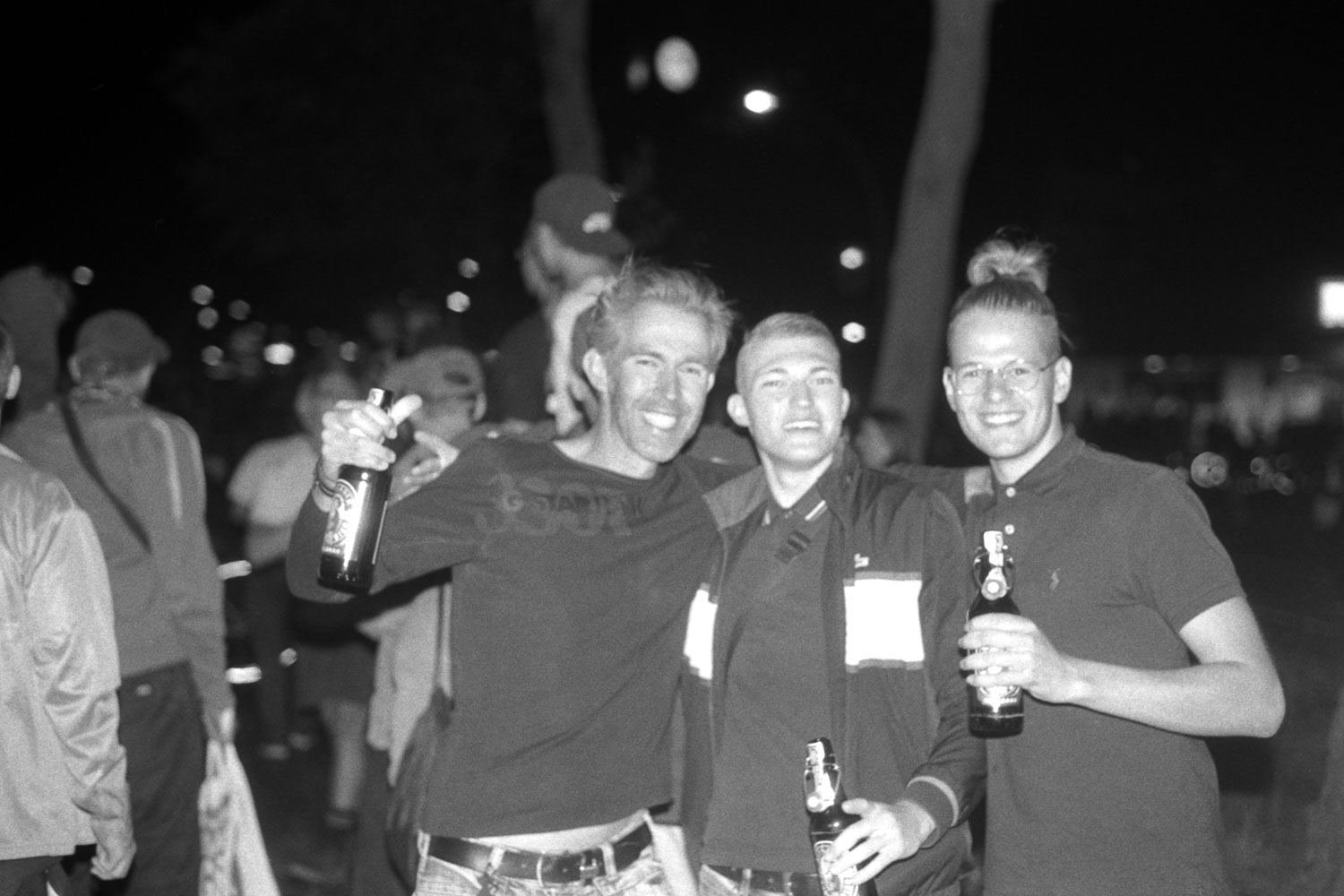 Niels had brought his son Bjorn to Berlin to paint; they had stumbled upon a slip and die session, and they were loving it. The spontaneous collective energy that skateboarders can create out of thin air is pretty fucking primal. We’ll organise ourselves into a corridor of death around a few spilt beers, and will have a sick time skating and stacking full speed, surrounded by screaming strangers, just for a laugh. It was nice to see these guys enjoying skateboarding at its loosest. 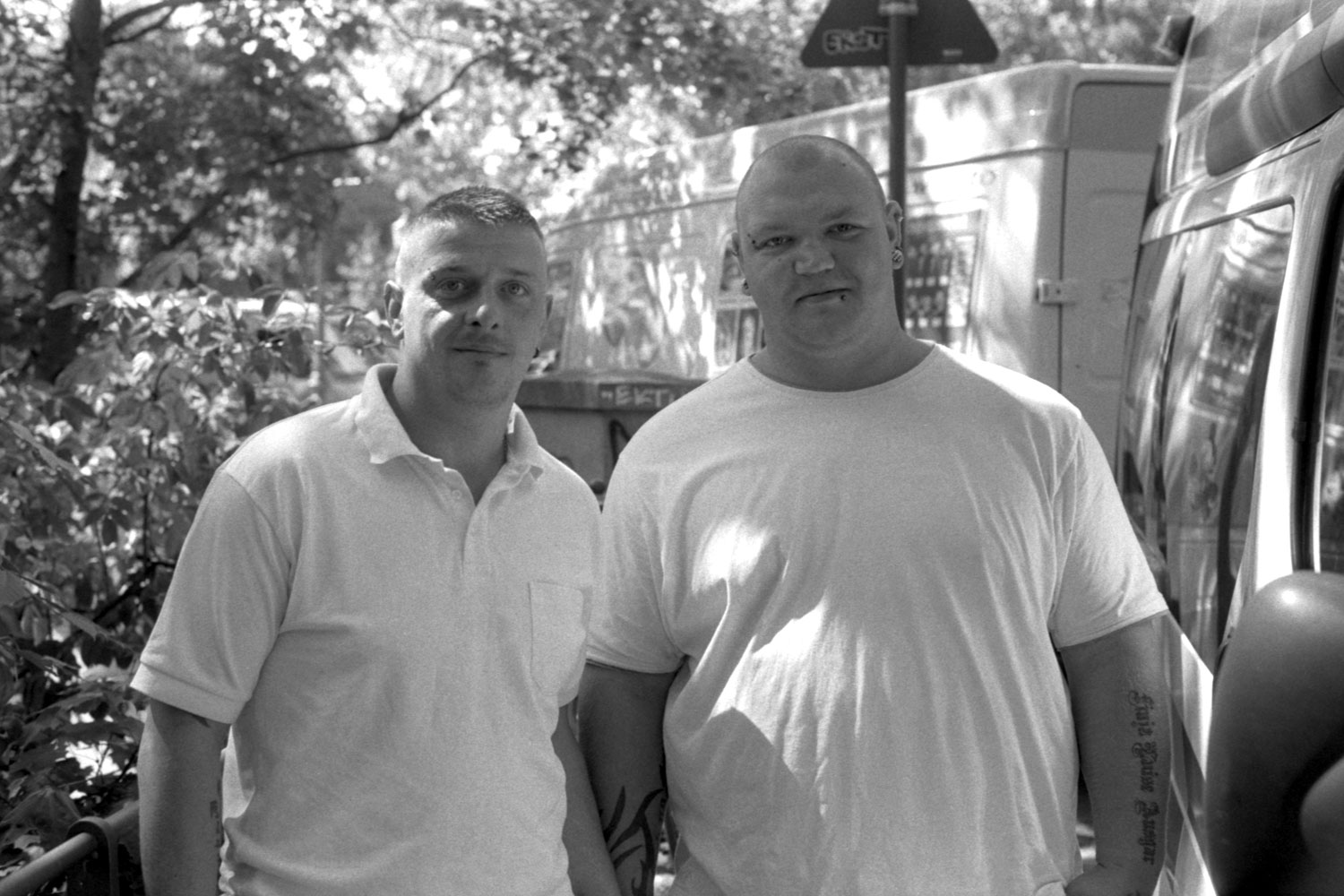 They didn’t speak much English, so I spoke to them in bad German and didn’t understand a lot of what they said in response to my questions. They seemed interested-ish in the skating but were fairly detached. The one on the left said he was more into mountain biking anyway. 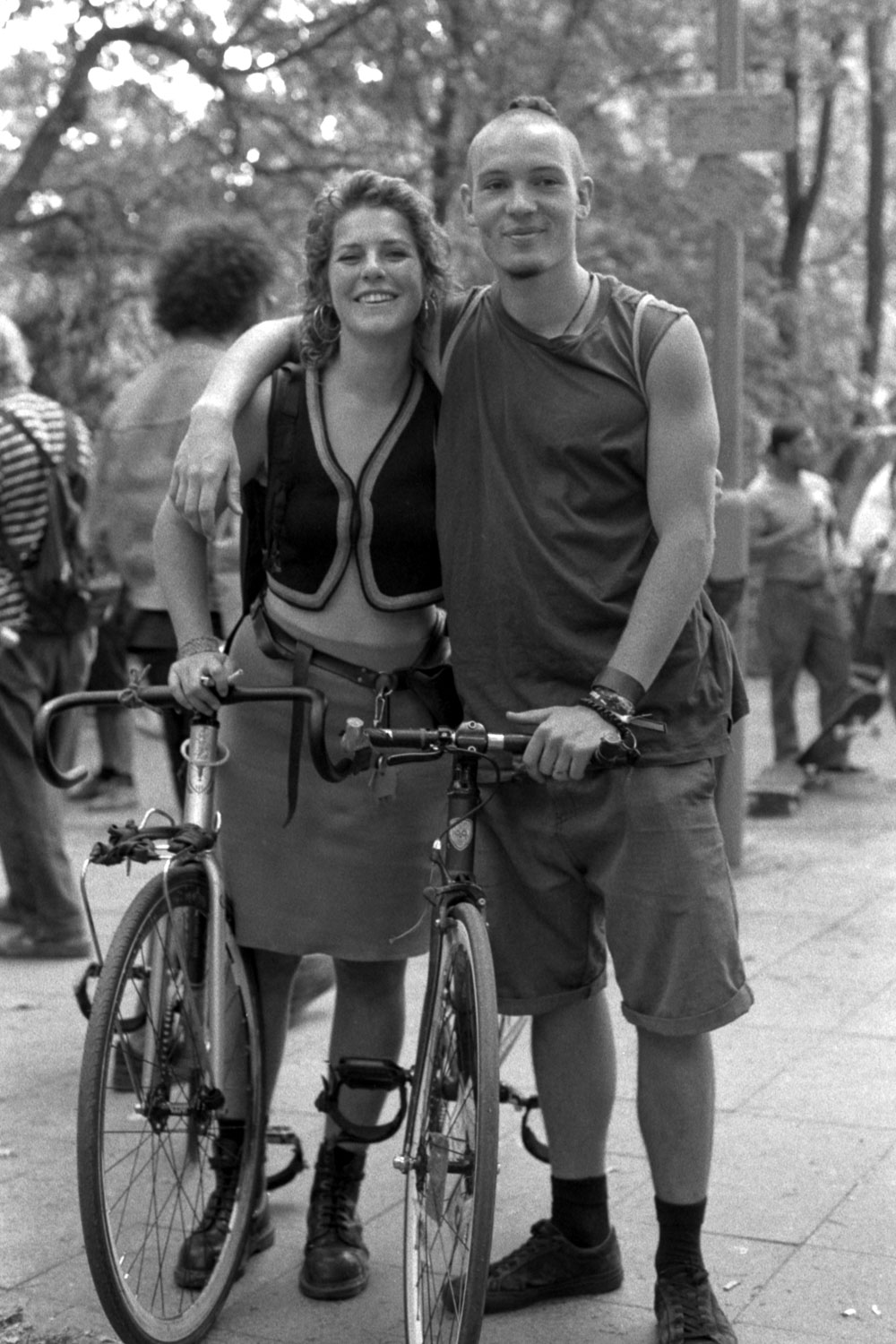 These guys were from Spain and were down for skateboarding. They come from the world of messenger biking, so I guess they share our perspective on pedestrians and cars being inconvenient but minor obstacles in life. They immediately recognised the magic of a group of like-minded people all stoked on the same thing.

We spoke about photography for a bit and Laura said that she never really takes photos of her life, she can’t be bothered. It made me think about how many skateboarders only skate when there is a camera pointed at them, and how it’s making us all stupider as a consequence. 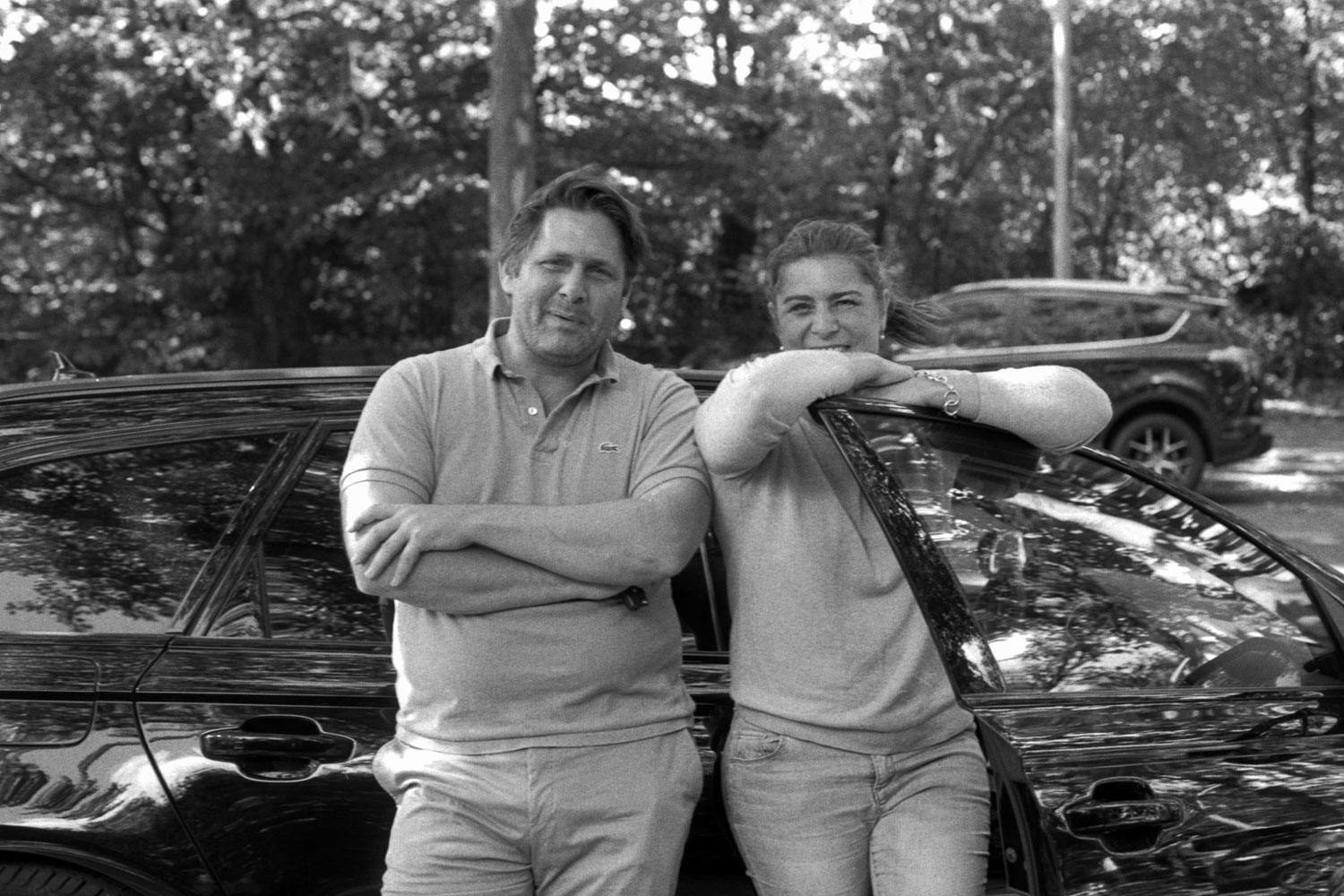 These guys were leaning on their car next to a session, and had a great view of absolutely fuck all skating. Apparently they had stopped just for the skating though, and they found it funny that so many of us were walking around holding our boards, instead of riding them. I thought this was pretty funny, so I did a powerslide for them. 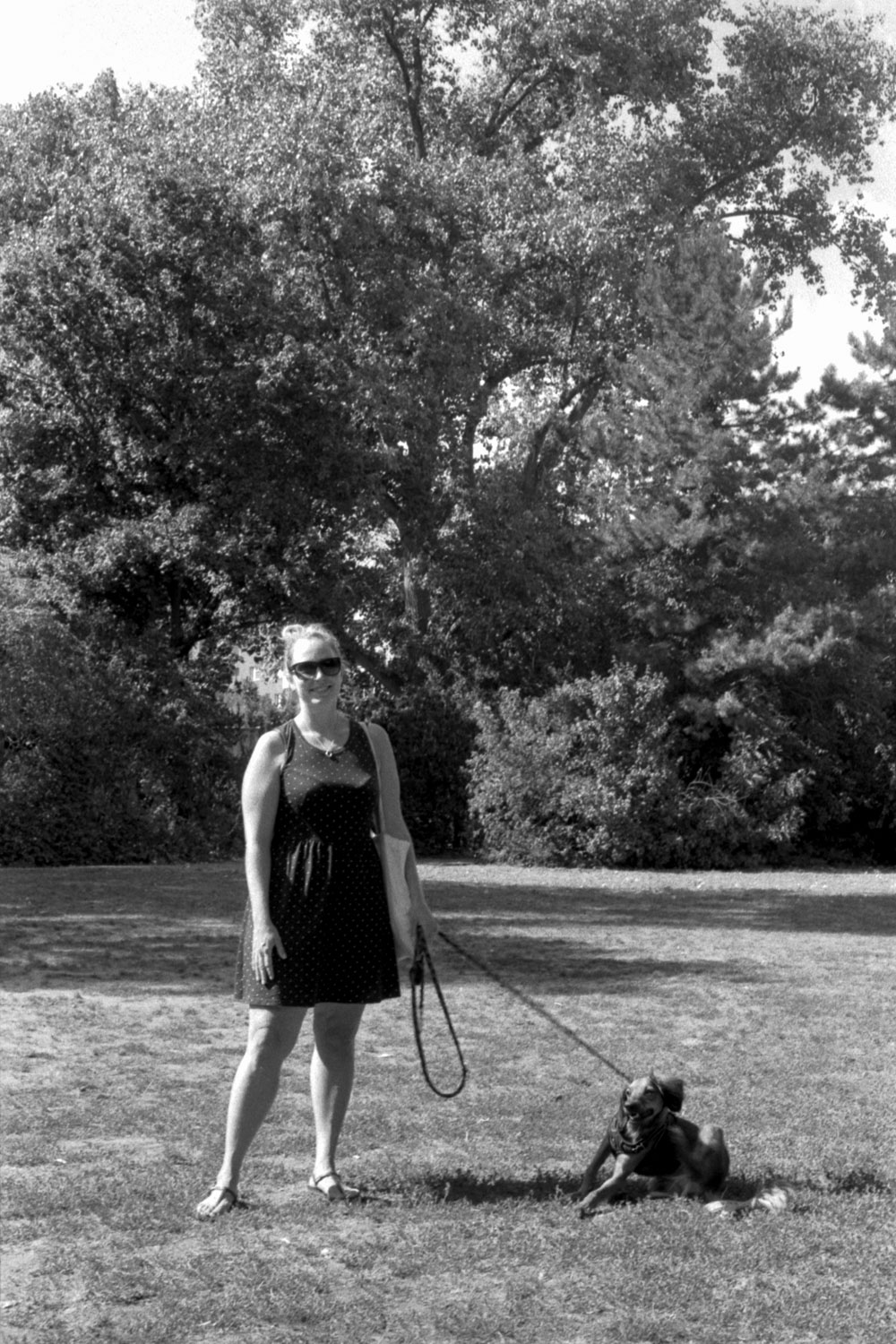 These two were watching a heavy rail session, as were many other unsuspecting people in the park. She seemed impressed with skateboarding, and also slightly wary of what I was doing with my camera. I tried to say hello to Pepper and she barked at me. Apparently she doesn’t like eye contact. Not sure what she thought about the skating. 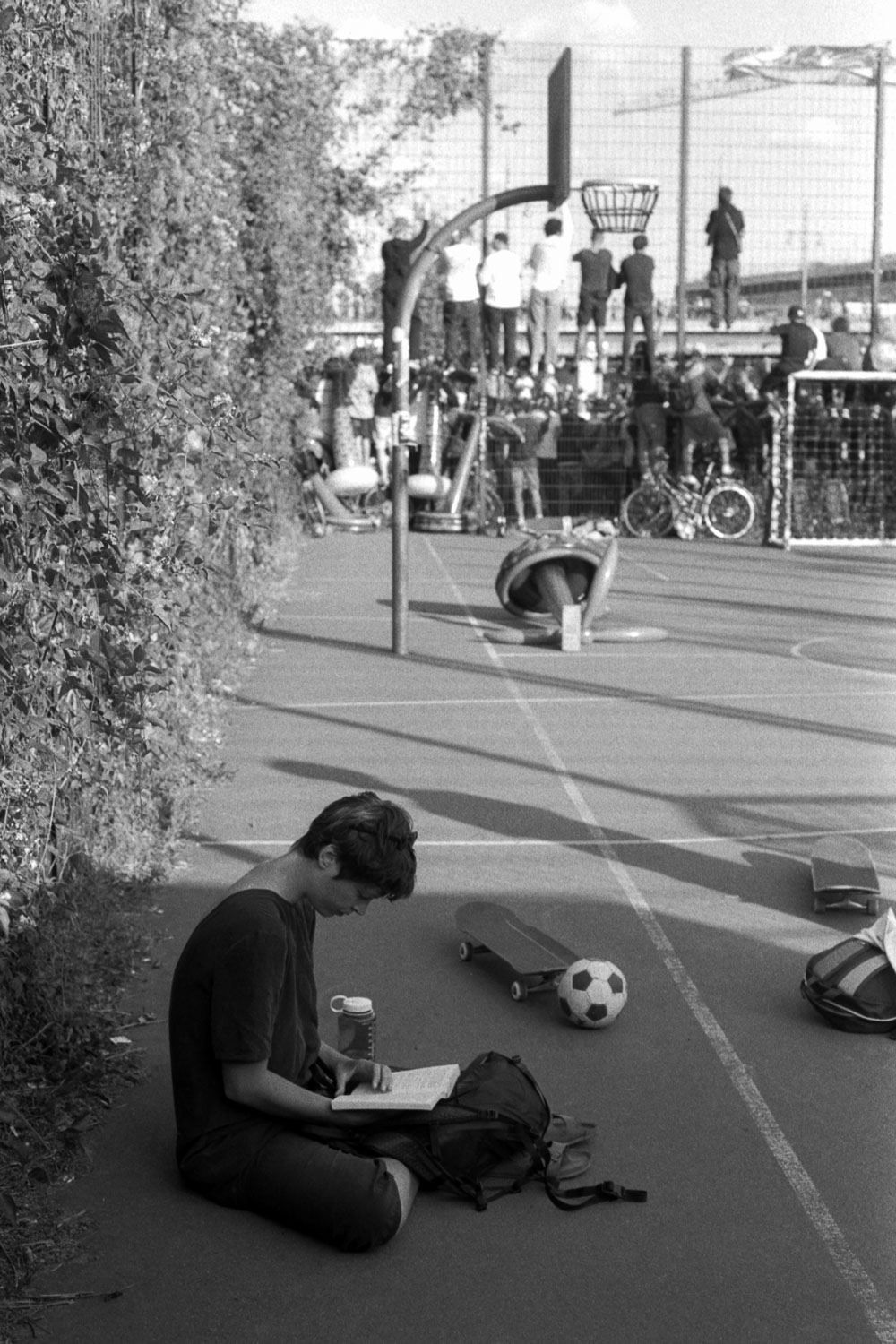 I thought she looked too mellow to be interrupted. Anyone able to seem so peaceful with a million screaming skateboarders over the fence must be pretty cool though. 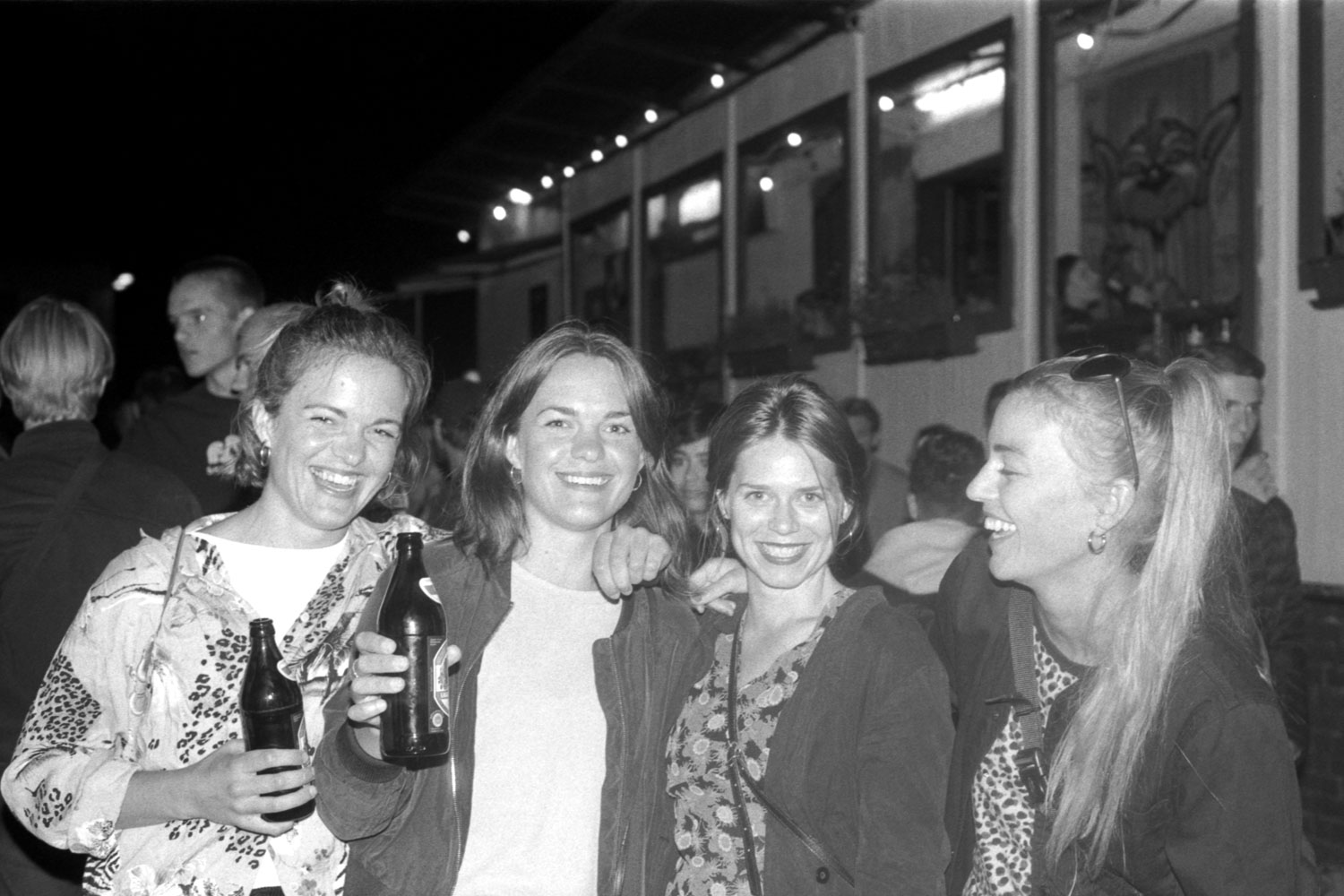 I met them in a queue to get into a party and asked what had brought them there. They said that they were looking for skater boys, which I guess means that there’s something attractive about us despite the general dirt and sweat. I’m happily married, so I pointed them towards my dirty and sweaty friends. Joanna said that she wanted a pair of the heart sunglasses more than anything, so I gave her mine. She was thrilled. 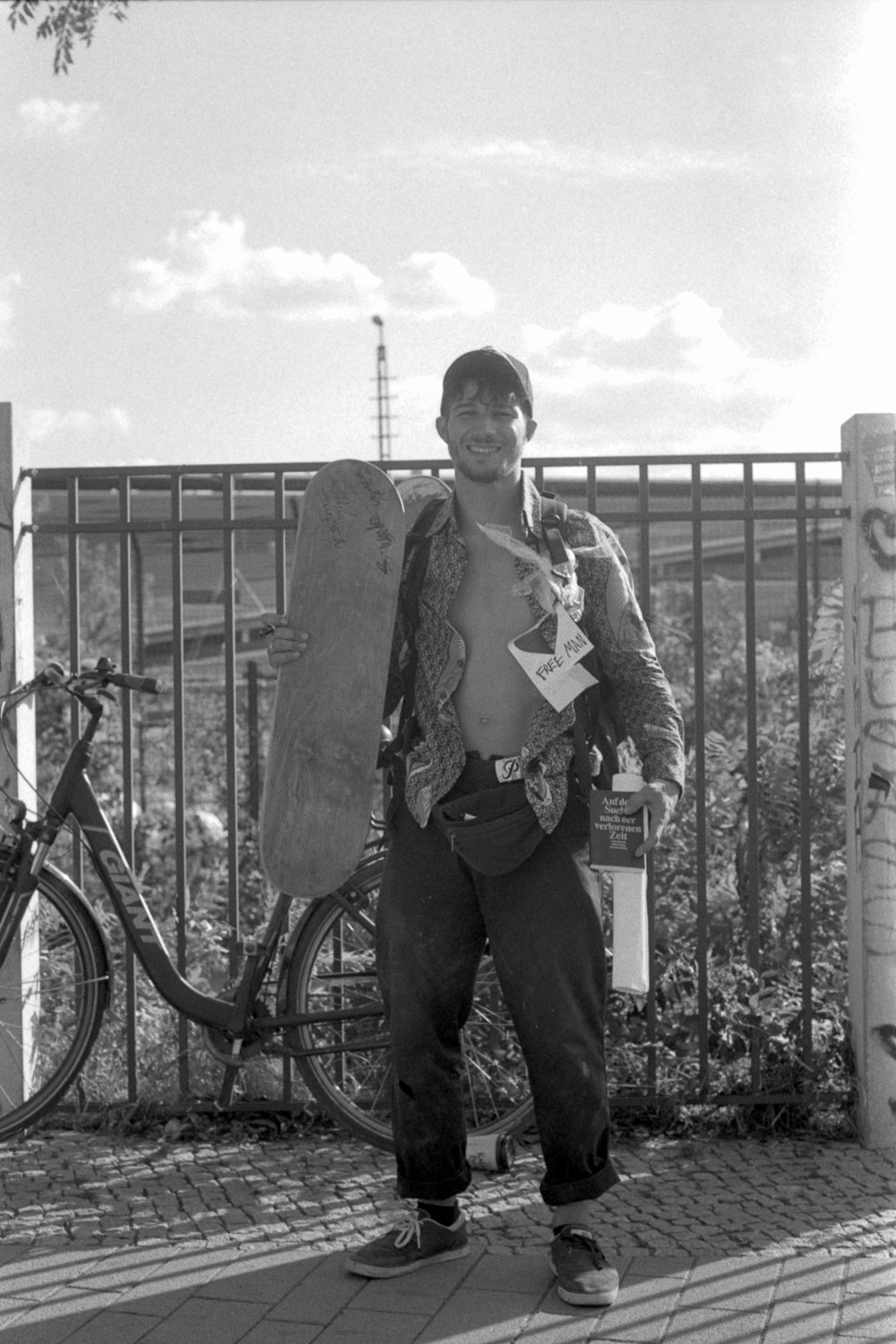 Apparently Freeman is his artist name. I don’t know what
kind of art he did. He had a book with him containing a list of skaters whose autographs he was hoping to get. So far he had found Youness, Phil Zwisjen and someone else whose name I couldn’t read. I wished him good luck, hoping he would meet his heroes and have a fantastic day.

Technically Stan wasn’t a completely ‘ordinary person’ either, but he was the
most stoked person I met all weekend, and I felt it necessary to include him in this story.

It brought me great delight to speak with so many strangers who were
experiencing a little bit of our world. I don’t know whether the people I met
were inspired to try skateboarding, or whether they made a mental note
never to talk to a skateboarder again and to book their children tennis
lessons as soon as they could.

Either way, I think that most of them got a sense of the freedom
we experience on a daily basis, and the fact that the world is a giant
playground to us, even when we’re crashing into it at full speed.