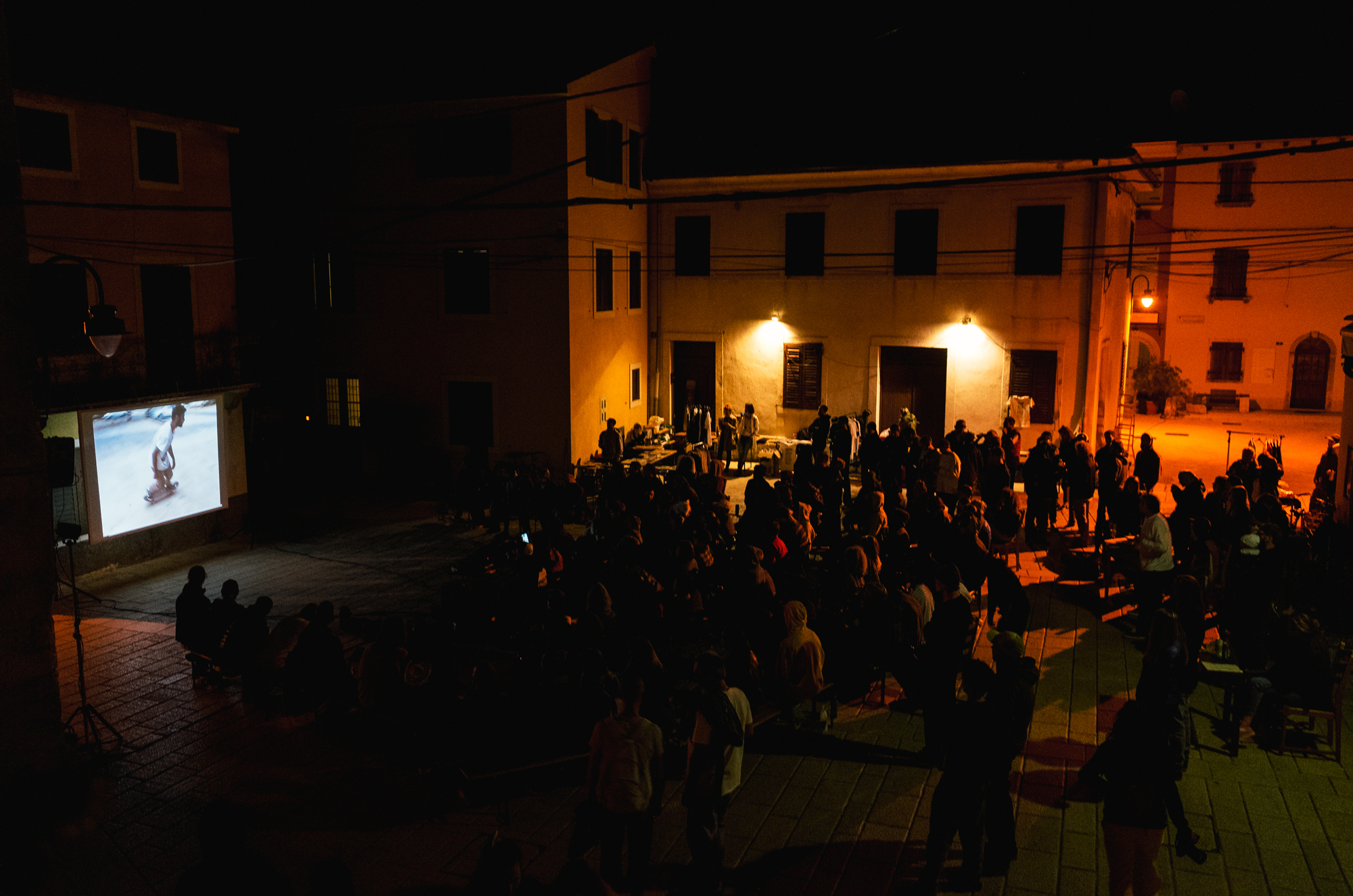 It surely is now safe to say that you’d be hard pressed to find a more unbelievable skateboarding event than Vladimir. Like, literally unbelievable – to the point where the local authorities, population, and even the first time visitors – until they actually start soaking it in – really can’t comprehend the cultural importance of that happening. And they aren’t to blame, either; the average joe is bound to fail to grasp the absurd concept of organising a four-day meet-up of skateboarders from the entire planet over to all gather in a small fishermen’s village in Croatia, boosting its population by at least a tenth overnight, for a few days that is – ‘til the festivities are over.

Strong of its eighth edition in 2018, the Vladimir Film Festival blew minds again this year with a program featuring an installation by the Six Stair filming crew from L.A. (Fruit of the Vine, Deathbowl to Downtown…): the Skatrix, featuring the never-before-seen – in Europe at least – three-dimensional screening of what resulted from the use of a combination of several differently orientated RED cameras placed at the bottom of a Californian pool, each one facing a different angle, the – uncut – footage of which gets projected inside a box visitors can enter to watch from the inside. This unique installation aims at creating the immersion of being right there at the bottom of the pool, in the midst of a heated session, when in reality you’re just sitting down at night in the middle of the Pula Kastel’s courtyard with legs so beat from your street session that day you just want to enjoy the show for once and, most likely, a bottle of Ozujsko. 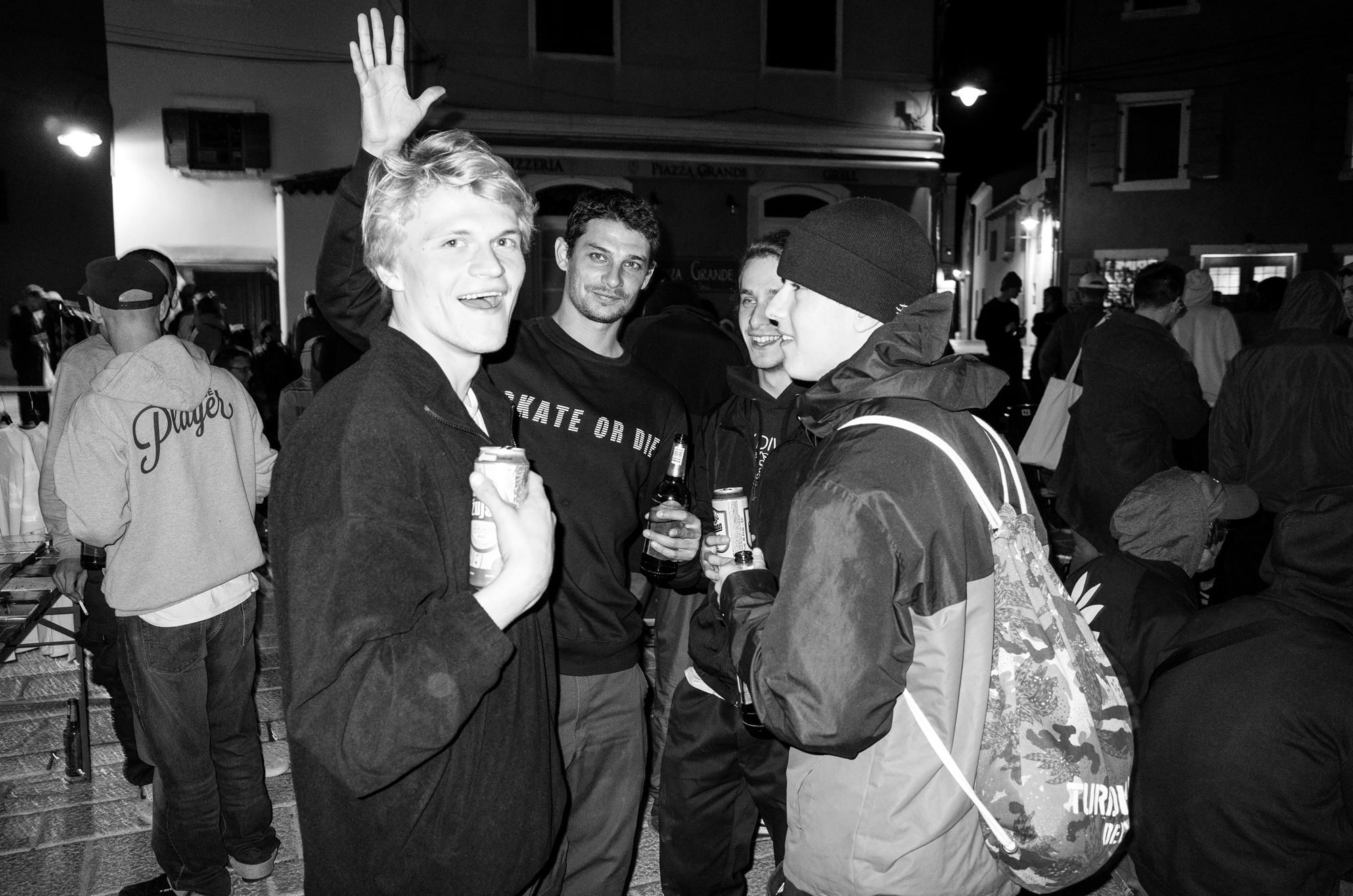 On – I swear – a completely unrelated note, the Brits naturally dominated the rest of the more classic screenings in the cities of Fažana and Pula, with the likes of the new Lovenskate video by Jackson Davis, Jim Craven’s new exotic epic, Marcus Craven’s tribute to Alien Workshop’s Photosynthesis or George Toland’s first full-length for Greg Conroy’s Serious Adult: Teddie, a true instant classic of a raw street skating video, filmed over the past eleven months with Vladimir as a deadline in mind, a goal only more magnificently honoured by George’s always impeccable VX-1000 skills. And if Teddie closed the first evening, the Croatian Simple Skateboards’ Nino Jurlina’s full-length Brothers made for the curtains of the second night and surprised everybody with a beauty that was at least equally strong, featuring parts from local rippers such as Zoe Milos or Mario Fanuko in a style reminiscent of the organizer of the festival, Nikola Racan’s 2015 film Solsticij, dipped in a palette of extra inspirations, resulting in a unique piece.

The Italian Dumb Skateboards’ video offerings also left a mark on the audience, notably introducing a brillant concept for a skate trip involving the construction of ephemeral D.I.Y. obstacles everywhere on their way, as opposed to just attempting to pillage what’s left of some of the pre-existing, hottest local spots. In addition to their videos, the crew’s positive presence could be felt throughout the entire event, due to their general enthusiasm when it would come to exchange with foreigners about local scenes, spots, stories and happenings, but also to shred the mini-ramp at a local former squat and now freshly renovated youth club, Kasarna (whose walls also adorned a Peter Fettich photo exhibition for the duration of the event). 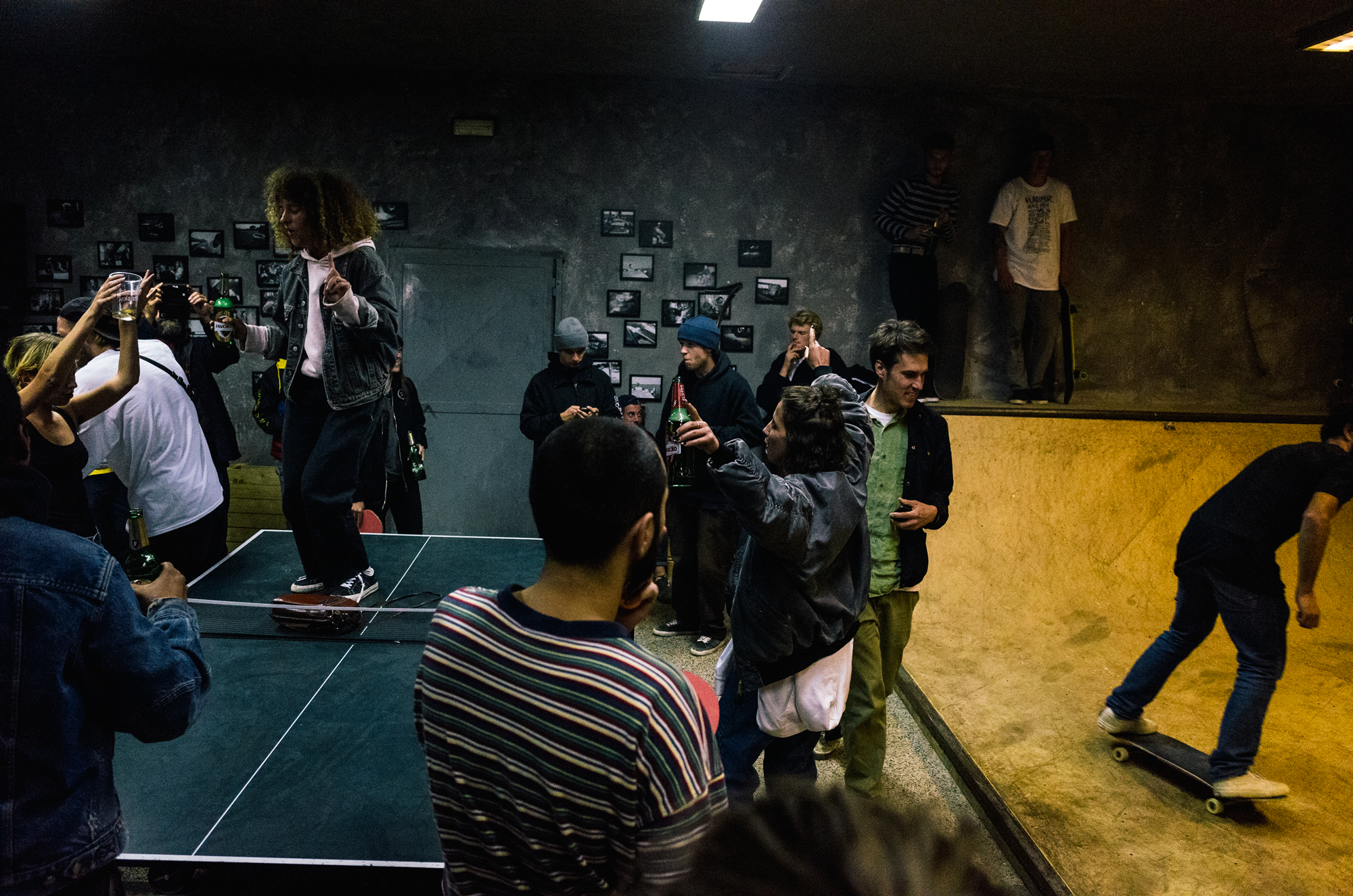 Speaking of which, one really has to personally witness those swarms of skateboarders – all strong of their respective origins, backgrounds, languages, accents and cultures – exchanging, skating, inundating the small enclosed space Kasarna has to offer till six or seven in the morning every night in between full skate days in the bigger neighboring city of Pula, to really get slapped in the face so hard it will tilt their brain by how surreal that magic is – so much it logically shouldn’t even ever occur and yet it does, yearly, thanks to the unbeatable efforts of Nikola’s crew. As long as those guys’ determination will keep them operating under the name of Skateboard Klub August Senoa, bringing an average of 300+ foreign skaters to a village otherwise normally populated by 2500 heads every year, combined with the popular attraction of the local, picture perfect late summer beach settings, there is no doubt the skateboarding culture and its transmission will remain safe.

Print-wise, this year was also the occasion of multiple photo exhibitions, falling in love with Danish-for-four-days Louisa Menke’s sharply melodic voice whilst recounting her story in words in addition to her pictures retracing her experience with Kenny Reed’s organization Skate Qilya as put on display at Kino Valli, admiring Medium Skate Mag’s Will Jivcoff’s colourful ‘Insha’Allah’ show at Galerija Cvajner, or contemplating São Paulo, Brazil representative Murilo Romão’s collaborative work with fellow experimentation enthusiasts Renato Custodio and Cotinz around their project Dornelândia. There also was a larger-than-life skate market featuring pop-up stores for Nick Sharratt’s love child of a skateshop: Palomino, the Croatian Simple Skateboards, the Italian Dumb Skateboards, the Russian Absurd Skateboards and more; but also a reoccurrence of Tom Wilk costumed skits, screenings of Keanu Robson’s Hawaiian Peel, Spencer Legebokoff’s Waltz, a new Science clip by Chris Morgan, and a conceptual edit of a trip to Iran by Tomaz Santl aka. Original Copy. Oh and for the second year in a row, the program was printed and distributed to not just the direct audience, but also most – if not all – venues and bars in Fažana and Pula under the format of a legit newspaper anybody from the skateboarders to the oldest local geezers could pick up from literally every table in sight; there was no escaping catching a glimpse of it, ever. The crossword puzzle is probably still haunting quite a few people’s dreams to this day. 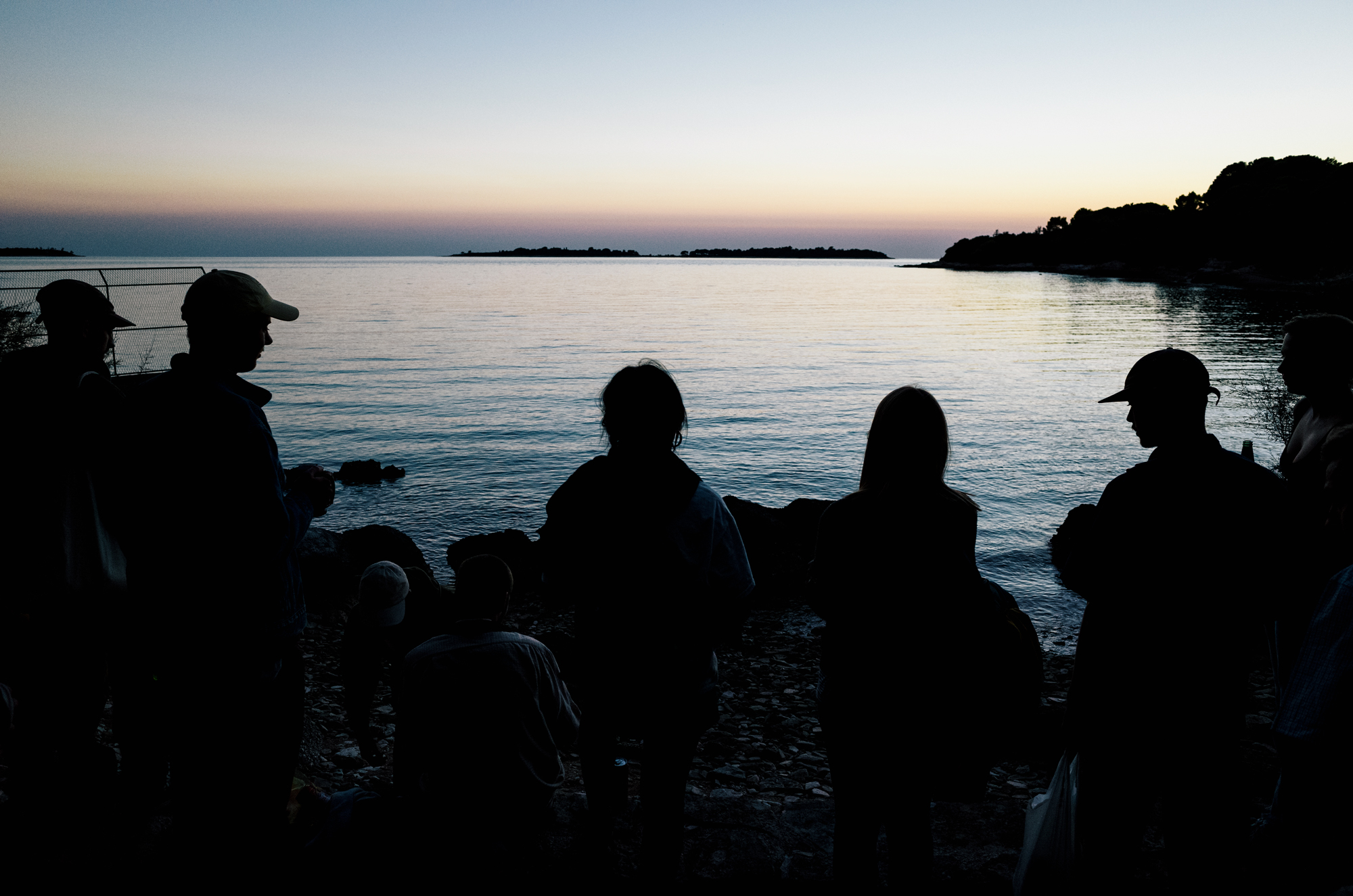 And last but not least, for the third year in a row, this 2018 edition of Vladimir eventually culminated at ex-Yougoslavian president Tito’s private outdoor cinema on the Brioni Islands, with projections of Jucie Huhtala’s Amazing Race, touching with Finnish flavor; the new Absurd Azov Sea tour video and finally, the stellar This Is Not the New Grey Area Video: Neverwhere by Polish crew Grey Area’s captain, Kuba Kaczmarczyk who monitored his troops throughout the duration of the event just as well as he did for years behind the lens.

Those who got to stick around and kick it in Fažana for a few more days after the official closure of the festival even got to enjoy a bonus event, under the form of a surprise, 60-question skate quiz night hosted at the infamous Black Lady bar the night following the Brioni screenings (in between many parties, after parties, Tibor ‘REPeat’ Rep’s public cooking sessions and barbecues). Whatever goes down at Black Lady stays at Black Lady, so in order to get a complete taste of the experience (and the kind of prize the winners can earn, besides the hint I’ll give you that all singers aren’t created equal), you’ll have to come in person next year and discover all the magic and then some by yourself, or with friends. 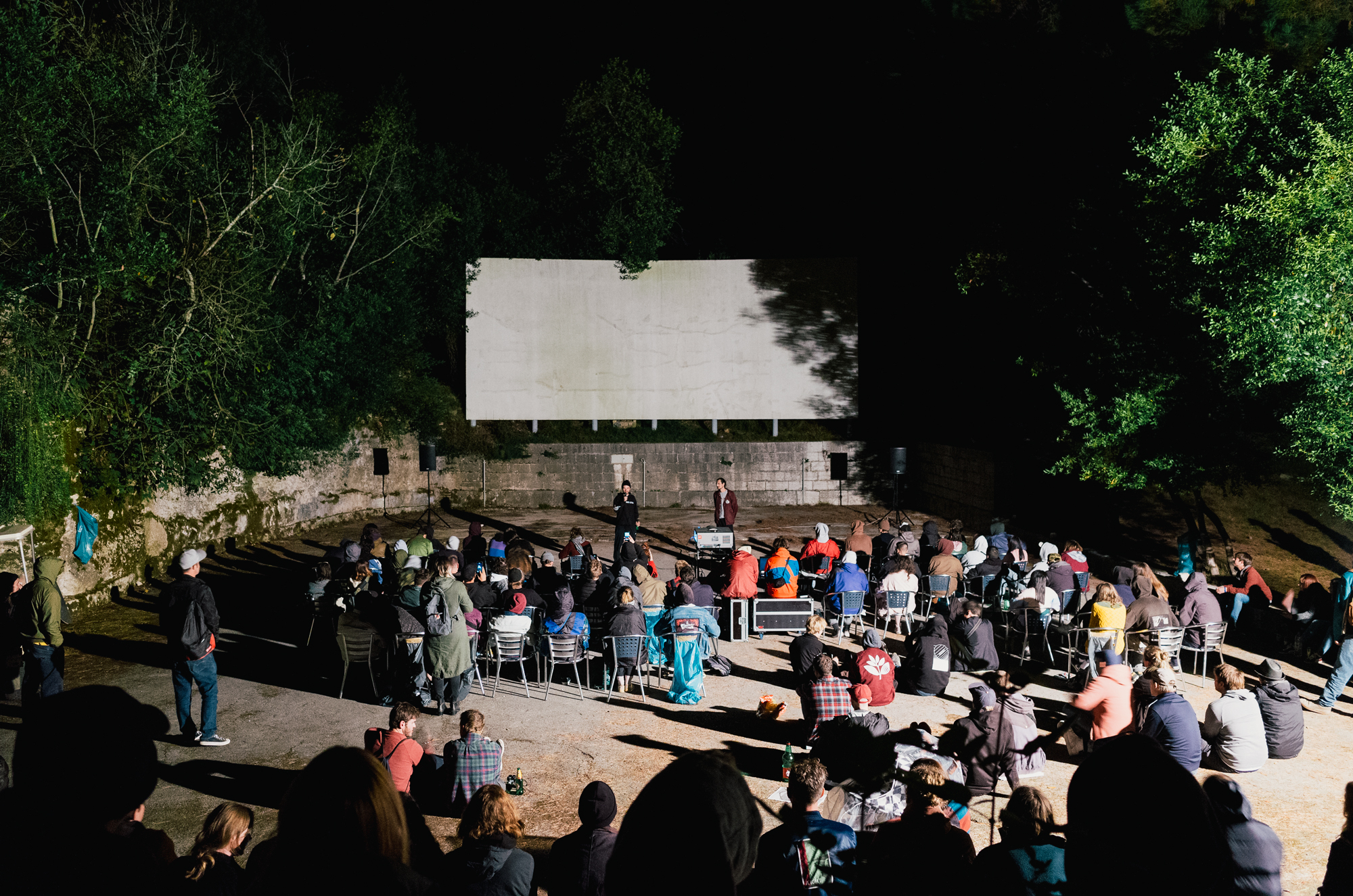 Once again this year, Vladimir Film Festival proved to be an exceptionally fantastic, federating happening where plenty of underground creatives from the whole world over got to gather to present unique productions and concepts, share ideas and obviously skate some of the most fucked up spots Pula has to offer (not even counting those nineteenth century fortresses). If you like to entertain the thought that in this modern era, skateboarding is dead, please do yourself a lifesaving favour and book yourself a few days off sometime late September next year; off to this institution of a grassroots, D.I.Y event on the Istrian shore; no matter the personal reasons for your jadedness, I’m not even giving you ten steps into Fažana before you surrender. And if you are a more positive type that’s inclined towards curiosity, exploration and communication, then you better have an extraordinary excuse not to have attended any of those eight editions so far, because those are the exact values each Vladimir drives, magnifies and celebrates. With Vladimir, you are not alone. 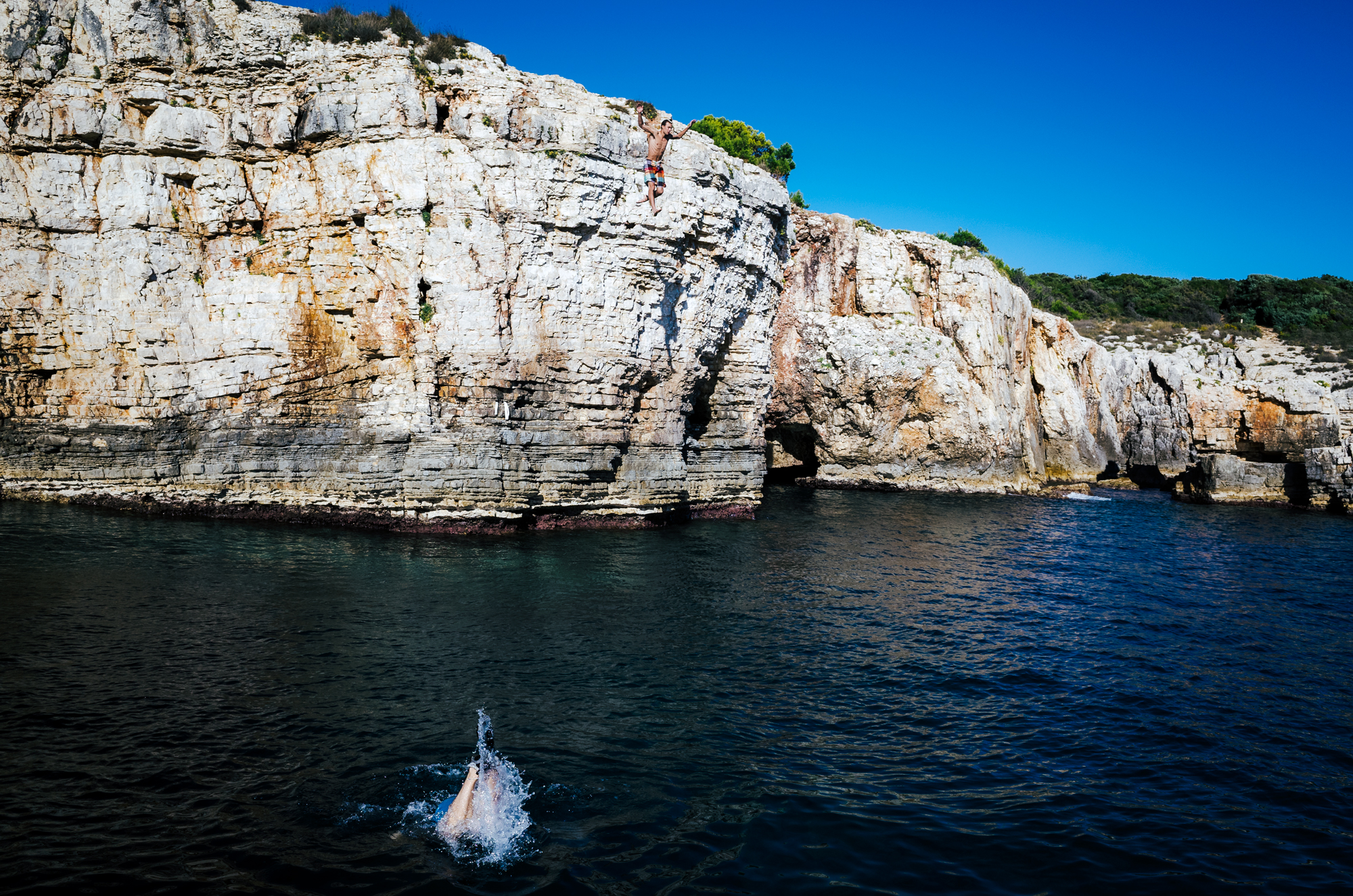