Istanbul aka Constantinople aka Byzantium aka Rome, the current most populated city in Europe – a promising pedigree for a skate adventure. There should be mad stuff to skate, some locals to share tips, sessions and a laugh with. It was the first experience of this special place for most of the crew and Istanbul delivered on all our hopes.
With one foot in Europe and the other in Asia, Istanbul is the only major city in the world to stand at the crossroads of two continents. Once considered the most important city of its time it still boasts the most unique blend of multiculturalism and diversity I have seen in one place. Günes Özdogan surely isn’t a first timer here, as he has family in the area and he’s repeatedly made the trip from Sweden many times since he was a youngster. His broken Turkish worked wonders… The locals would have eaten us alive if it wasn’t for him – nah just kidding. The local population is incredibly nice and very down with skateboarding. Exceptional hospitality really, Günes made it easier for us to appreciate it by translating the locals’ enthusiasm for our kickflips. Günes knew the plugs for all we needed, which consisted of three things: a skate spot to start the day, chicha (hookah) and beers to close it. He delivered flawlessly. Jet Lag Brothers baby! 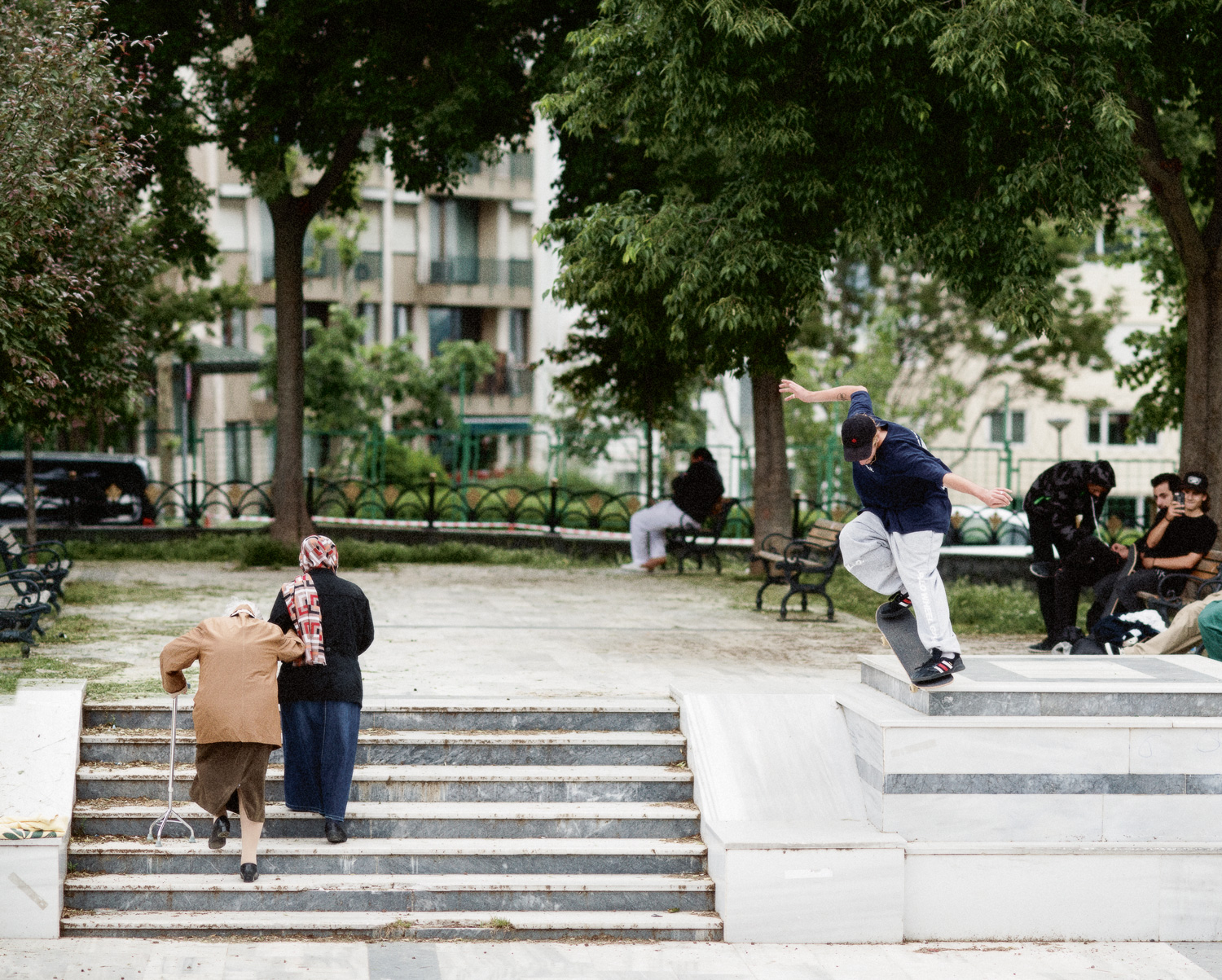 We brought the Jersey twins on the trip, the notorious fast men Glen Fox and Luka Pinto. Luka has problems with his knee so he claimed he was gonna stick to filming. He showed up in North Face hiking boots with filmer wheels and still managed to bless the Turkish soil with his natural talents on a board a few memorable times. God bless Jersey Island, mother of these two unique fellas. That being said boys: will you please move to some more accessible place on Earth swiftly? Thanks. Both these boys had barely heard of Turkey before, so they came to Istanbul with no preconceptions and no idea what to expect. It’s arguably the best mind-set to visit a new place. They were blown away by the size and diversity of this behemoth of a town. The food, chill vibes and massive politeness won them over quick. ‘I don’t have a bad thing to say about this place,’ said Foxy on his way out. OK, he likes everything so it doesn’t count, but still, listen to the man. 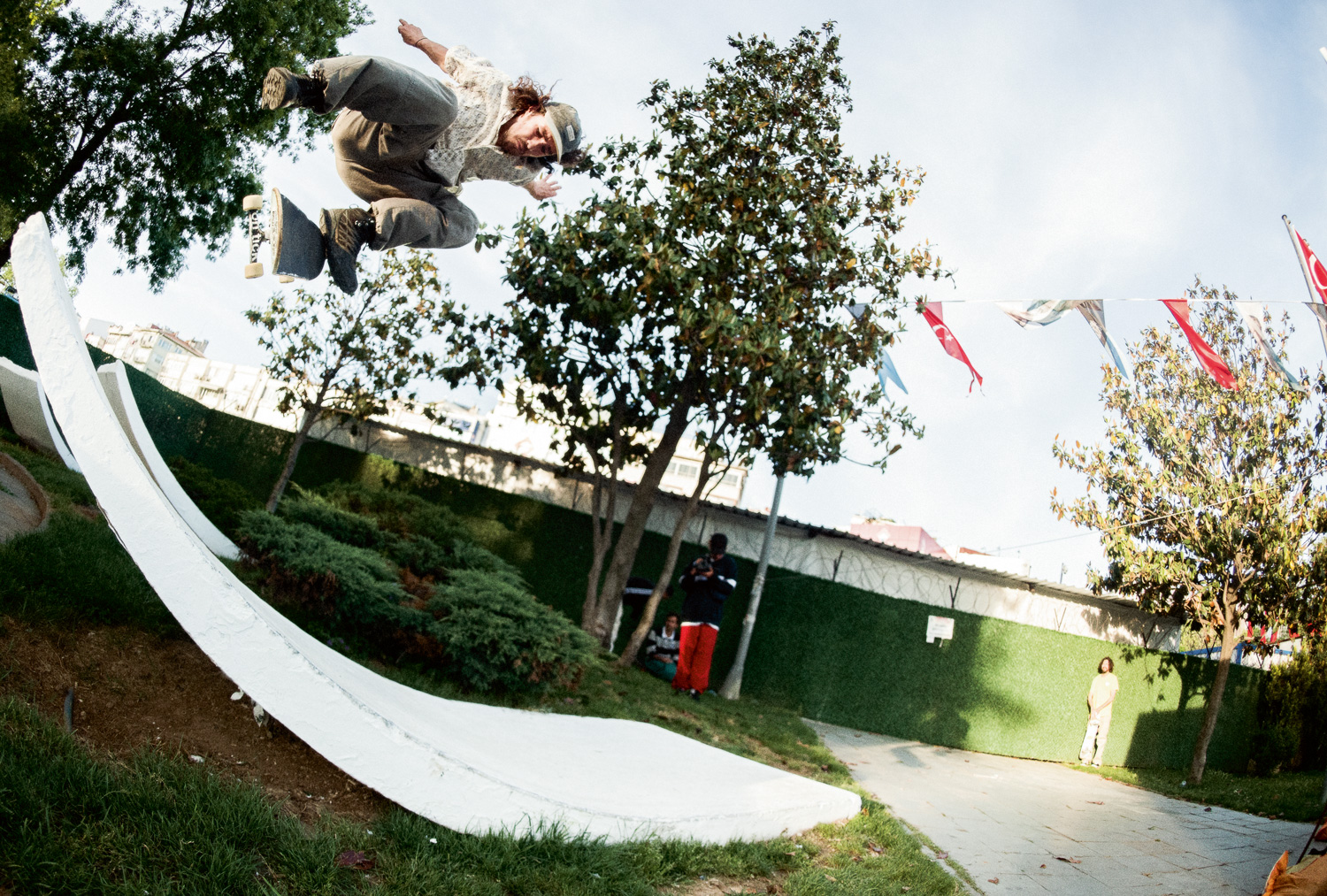 Good thing Luka brought his hiking boots since the city rests on seven massive hills; everything is tilted. We went on daylong expeditions at random and struck gold on every occasion. Again it helped that Istanbulites are so down with skateboarding and so welcoming to foreigners. Dudes running shops would take their tables and chairs out of the way in a hurry to enjoy watching us destroy their marble storefronts. Soldiers and cops were trying to see a kickflip rather than our passports. Only the street kids were a bit annoying. But I’d be annoying too if I came from Syria after some dudes blew my entire life up. There are over a million refugees in town; you can tell our dear leaders are playing their little war games in the vicinity. Add to it a political and financial crisis that’s been going on for a few years, Turkey has it pretty tough these days. Extra props to the people for keeping it G and remaining to be the best hosts in these hard conditions.

Mr Panday was also a first timer. We share an interest for history and Istanbul is by far the number one place in Europe to see cool shit from the past. Some of the most impressive churches, mosques, Egyptian obelisks, underground tunnels, Roman buildings and palaces you’ll ever see just line up the streets endlessly. Everywhere you look there’s some Aladdin old type of house, wall stone or mosque to remind you this place has been around for a minute. It blends perfectly with more modern structures and soon enough you walk past ten things you’d stop to stare in awe anywhere else in the world without twitching. The hills bring 3D to the package with skyscrapers battling minarets and medieval castles with the Sea of Marmara in the backdrop. If you’re enjoying this sight during sunset sipping on raki and chicha, and feasting on delicious appetisers, watching Soy Panday do a nose wheelie, you’ve hit heaven.
Sem Rubio the great Spanish photographer came in late on the party. He delayed his arrival by several days for believing the treacherous weather forecast had us doomed for the entire week. The Turkish Gods decidedly ruled in our favour and we could skate todo los dias sin problemas. Sem showed up on the weekend right after we decided the best way to top a full day of skating was to attend a massive feast with locals at a homie’s restaurant, full bottles of raki included (look up what this thing is, it’s good, but it’s not good if you get too many). It was an epic night, but surely the day after, we were not the almighty athletes Sem is used to shooting with. Not that we were ever that. And not that he would care either as his fiery Catalan eye could turn a tortilla into the Mona Lisa. Sem stayed for a short time but shot a lot. Most of the stuff we did we barely noticed he was shooting, which is a great sign. The loose style of photography that has thankfully widely replaced the painstaking flash setting process suits him very well. Sem is a special photographer and we are blessed he came along on this trip. He could very well be shooting anything and get universally acclaimed for it, yet he chose to stick to skateboarding, in spite of how little financial gain there is in it and how unappreciative the industry can be with these artist types. Not bad hombre. Also he ollies fences in Misled Youth so you know he meant business on that side too.
If you visit Istanbul and you’re looking for the local spot, go to Barbarossa Meydan (Barbarossa Plaza) in the Besiktas neighbourhood. There you’ll find perfect floor, ledges, manny pads, stairs and the trademark cannons. You’ll meet the ‘Meydan’ locals Adem, Emir, Kadir, Arno, Kutberk, Bartu, Cengizhan, Furkan and the rest of the gang. According to Günes, the scene grew since his last proper skate trip there with Patrik Wallner back in 2010. Let’s hope it continues. The locals welcomed us with open arms, as I’m sure they will do with you as well if you come their way. 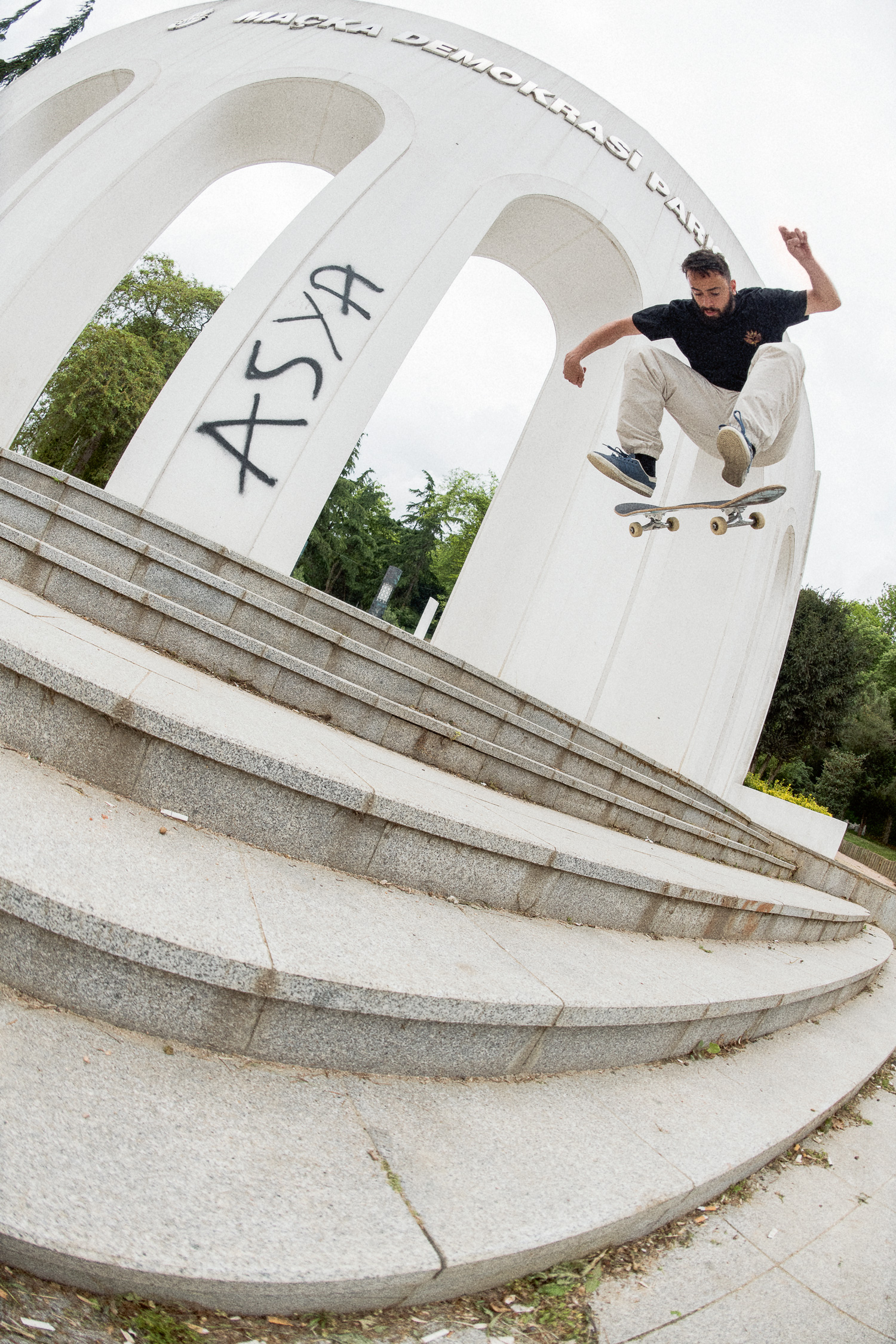 The food here is off the chain bruv. It reflects the widespread influences Istanbul has had and collected throughout the years from Europe, Asia and Africa. You can find any style with a local twist. People say you could try a new dish every day but I’ll stick to chicken shish mamen. Günes introduced us to his favourite morning starter, which even Sem liked. Here is the recipe of this marvellous dish from Grand Master Kebab Chef Gunzzz:

– 6 long green peppers cut into small chunks (our host uses one or two sliced blazingly hot green chilli peppers as well, but bravery is required for this version). Bell peppers can be used if you can’t find long slender ones.

– Half a cup of olive oil

– Salt and pepper to taste

Beat the eggs in a bowl and add a little salt and pepper. Warm the olive oil in a large pan, then lightly fry the onions and peppers without browning. After about two minutes add the chopped tomatoes. Cook the mixture until all the veggies are nice and soft (around 7-8 minutes), and the juice has been reduced by about half.

Pour on the eggs and stir continually until it begins to firm. The resulting masterpiece should be firm and juicy, not dry. Season with salt and pepper. Serve immediately with fresh bread: the ideal accompaniment to mop it up.

To sum things up, Istanbul is banging; we give it a 5-star review and we will be back soon.