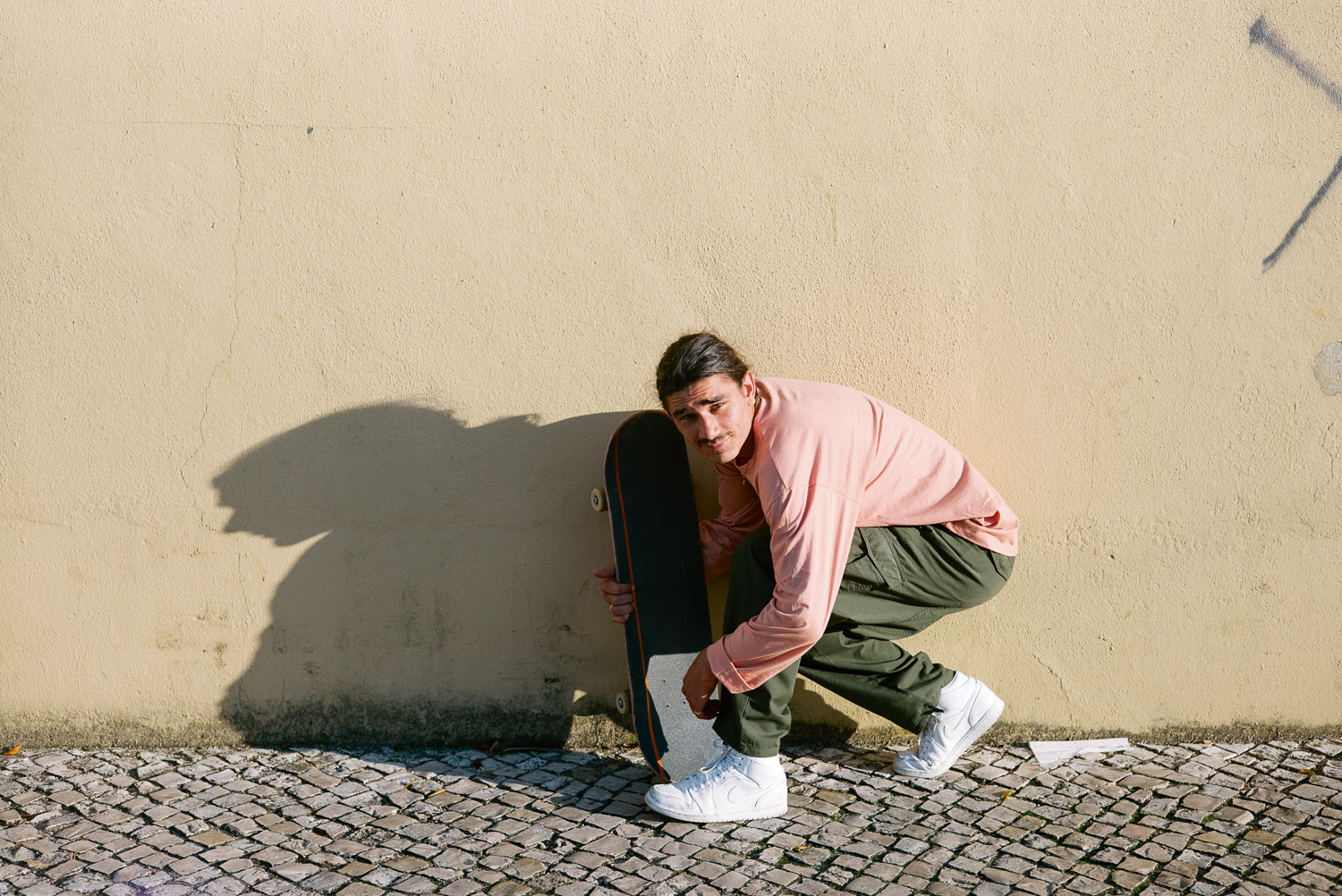 They say that art is a reflection of the artist’s life. Well I feel your skateboarding is a reflection of your personality. In Didrik’s case, he’s just one big happy ball of untamed energy and his skateboarding mimics that. His skateboarding is an explosion of energy: it isn’t trying tricks – he is flowing. He doesn’t care about the dog barking, he’s not caring that he is landing into oncoming traffic, nor bothered by having to weave around the old lady walking down the sidewalk. He is poetry in motion… He has quick feet and can flip or shove out of almost everything he tries.
He has a bag of tricks that spans through every decade of skateboarding. He must have a P.H.D. in skateboard trick knowledge. It really is a treat to watch Deedz skate in person. Whether he is dancing down handrails or at a club in Barcelona, you’re guaranteed to see Deedz with a smile on his face. 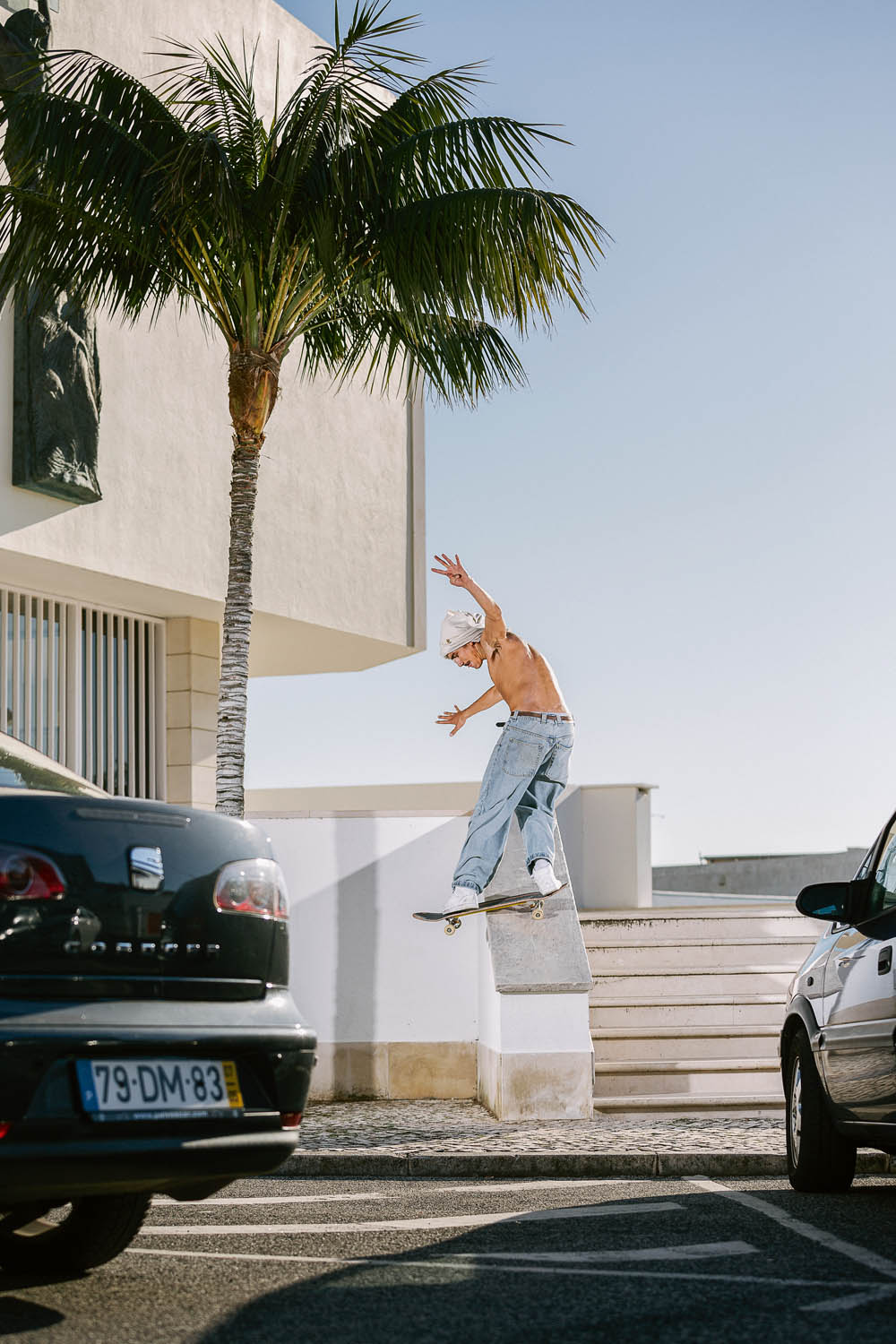 Ollie over to back lip, Lisbon. Ph. Marcel Veldman.

What’s up Didrik? How did you get the nickname Deedz?
What’s up Louie! The nickname Deedz came about when I was staying in Long Beach. One of my good friends there just started calling me Deedz and made me watch Mr Deeds one night, actually it was a couple days before Halloween and I didn’t have anything to dress up like and I ended up dressing up like a pizza delivery guy (Mr Deeds) and the nickname just stuck. There is still a bunch of other nicknames homies call me: dids, doods, etc.

You seem to be everywhere these days! Australia, the US… Where in the world are you at now?
Yes I’ve been travelling a bunch these days, non-stop pretty much. Just trying to keep on moving and see new places, meet new people and skate different spots, etc. I just got back from Barcelona yesterday, so at the moment I’m back home in Norway. 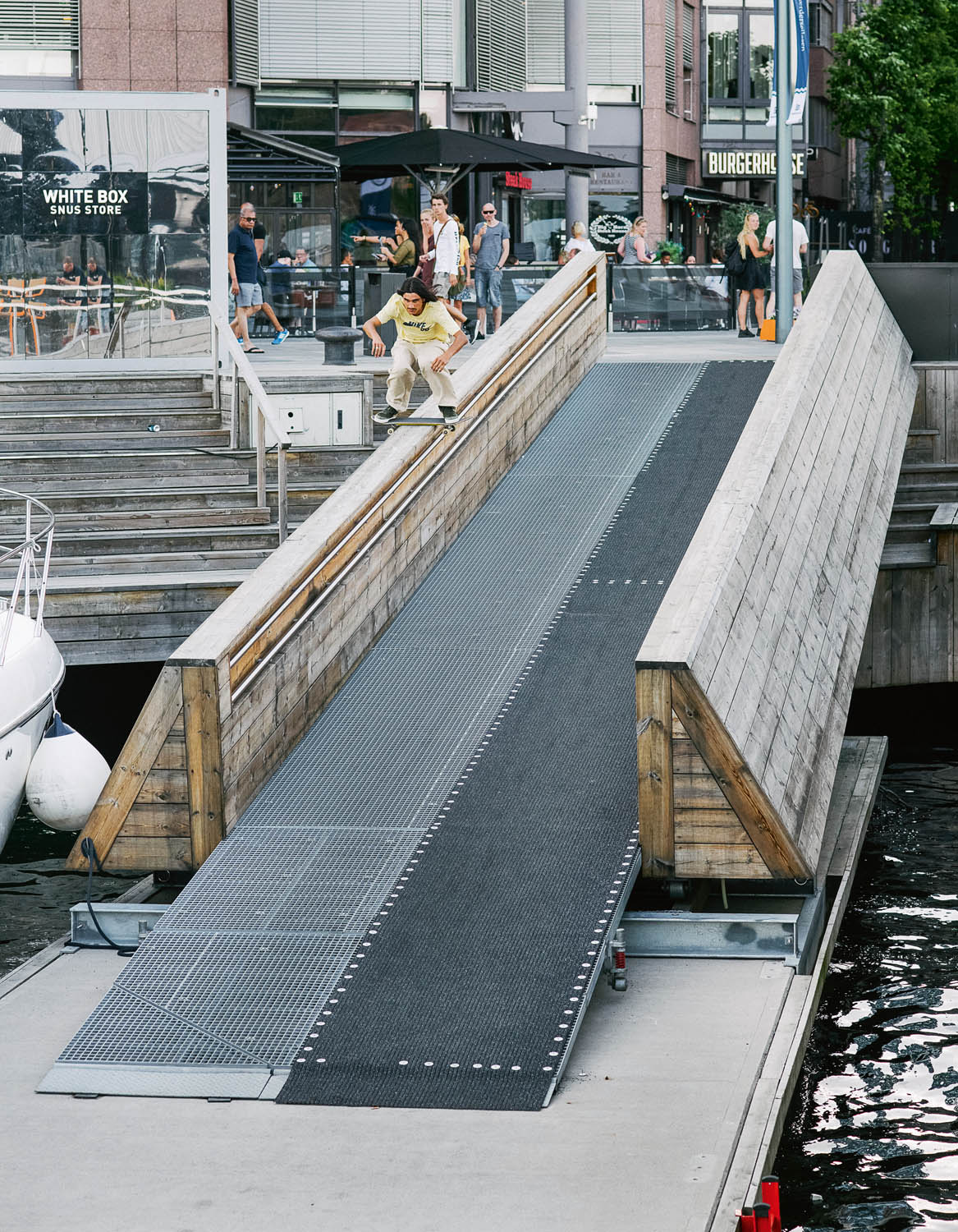 You are kinda the first generation of skaters to come out of the ‘skate school’ in Malmö. Can you explain what the school is all about?
OK so I moved to Sweden when I was about 16 to go to this school called Bryggeriet gymnasium in Malmö. It’s basically a skateboard school that has all the regular courses like Math, English, etc., but you also have skateboarding. It’s kinda hard to explain actually how the school works but there are classrooms, a cafeteria, etc. upstairs and a big skatepark downstairs. It’s set up like you have 1-3 skateboard classes a week mixed in with all the regular courses. When you have skateboard lessons you mostly just skate with all your classmates, but sometimes we had like funny games, we try and learn new tricks, learn about the industry and watch old skate videos.
There is a documentary about the school, so if you are interested just search ‘Bryggeriet gymnasium’ on Google. 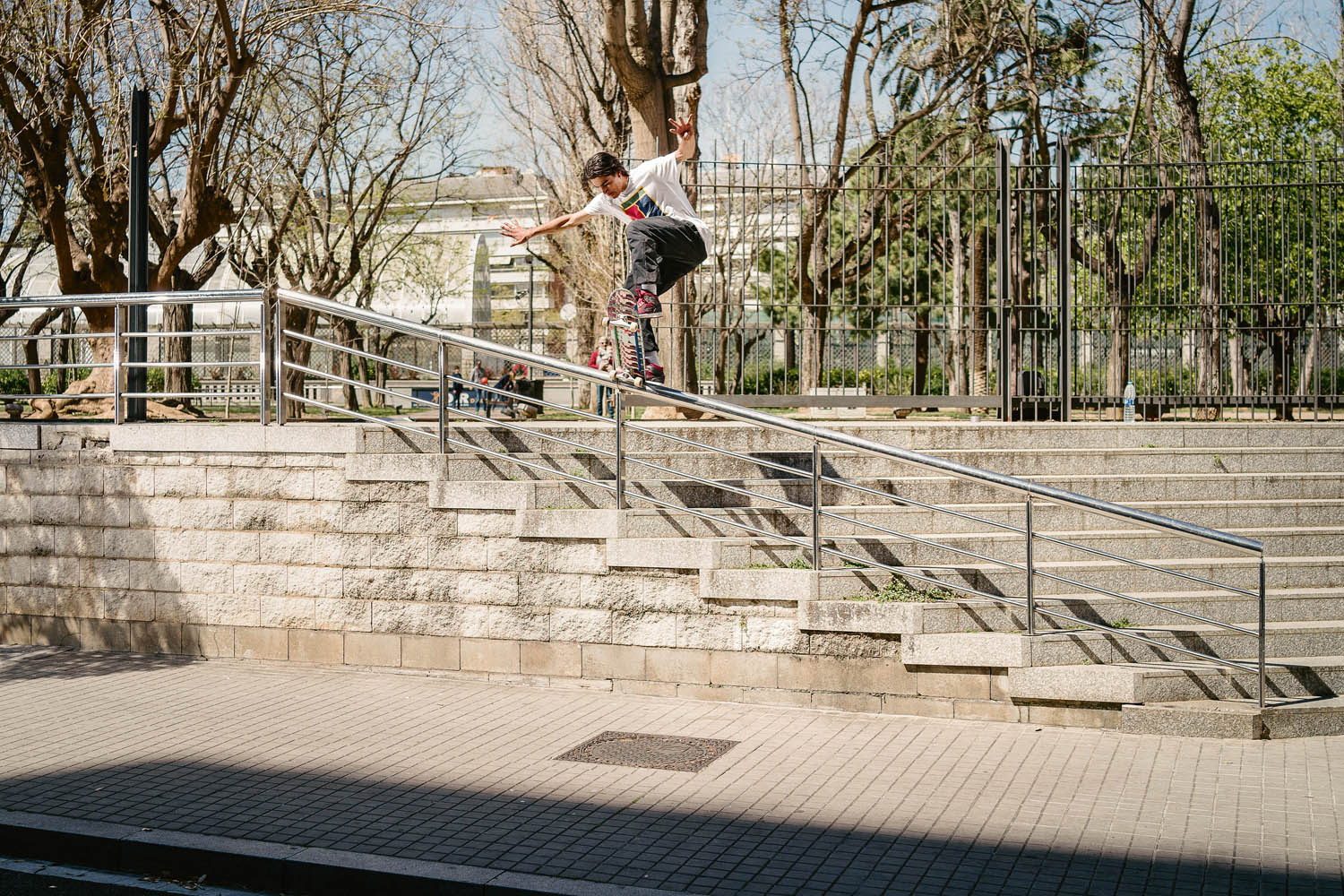 Rad, did you grow up skating at a skatepark?
I grew up skating an outdoor wooden park close to my house. It was actually right behind the football field I used to play at before I saw the skatepark in the back. The park was pretty alright; it had everything we needed for that time just a classic wooden skatepark. I remember that we never really got any help with the park from the city so everything that got built or changed was my homies doing it. I was pretty small at that time so I was mostly just watching and coming with ideas like ‘ay build a kicker to rail’ when they where building or changing plates, ha ha. I loved that park though… So many good memories. I wish it was still there. 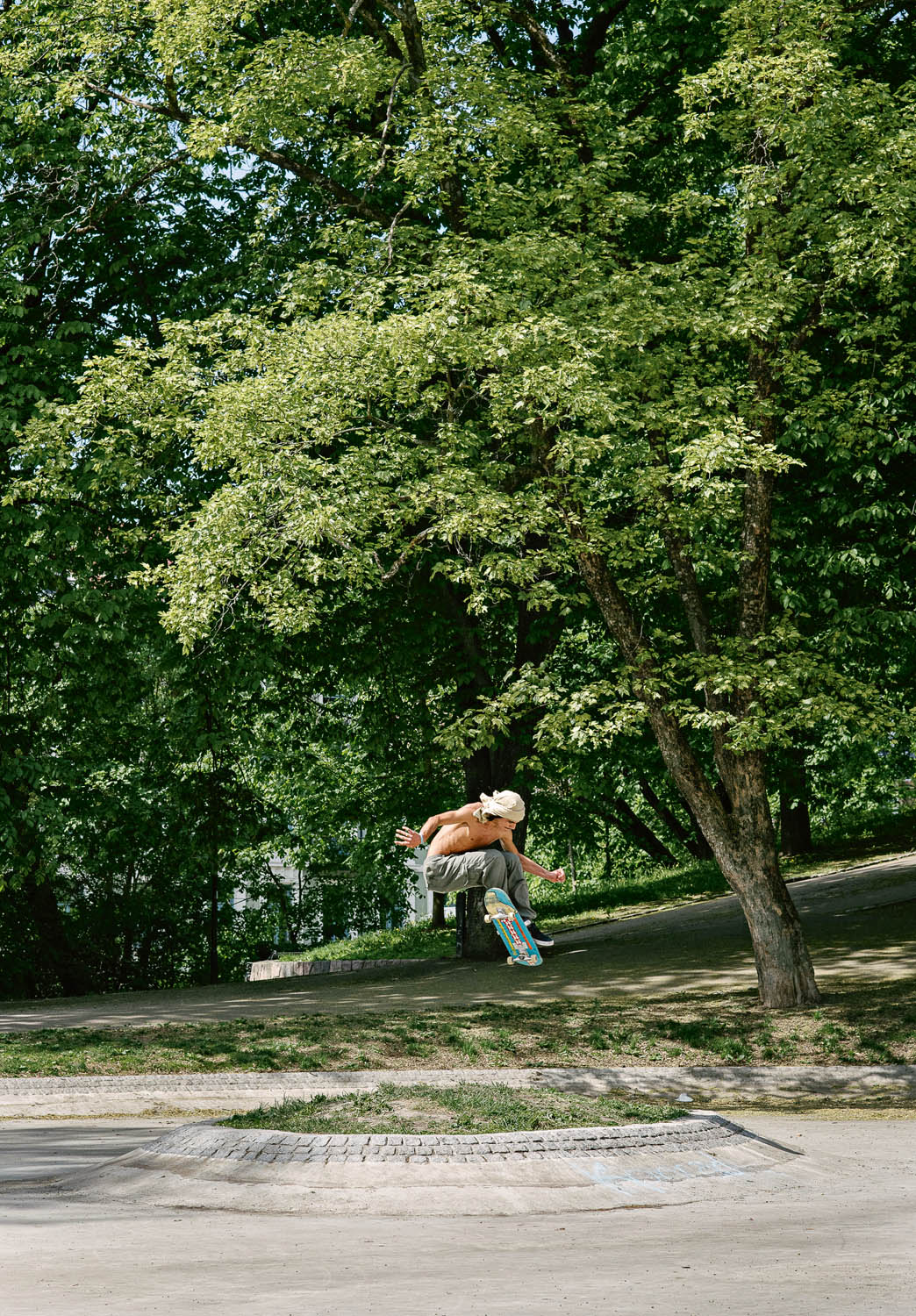 I’m sure it made the winters a little easier. How was it surviving the Norwegian winters?
Oh harsh, but it was all good. We always had an indoor skatepark in my city so I spent most of the wintertime inside the skatepark. If not I was out snowboarding with my friends or something like that.
And now do you just try to plan to be on skate trips and avoid those extra cold winters?
Yes I try to do that… I don’t really like the snow or the cold anymore so I try to spend most of my winter out of the country. I just travel to warmer places that I can still skate outside.

You seem to have a good balance of footy from all over the world. I know you skate Cali quite a bit. What are your thoughts on the difference in skate culture between Europe and the States?
I like both, but it’s definitely a little different. Like when you try to skate in the States you kinda plan it from day to day: ‘today I’m gonna skate here’, Friday to Sunday you skate schools, etc. Europe is maybe a little bit freer. It’s way easier to skate and go around with no cars… Even from country to country inside Europe it’s so easy to travel. There’s way less police and busts in general too. 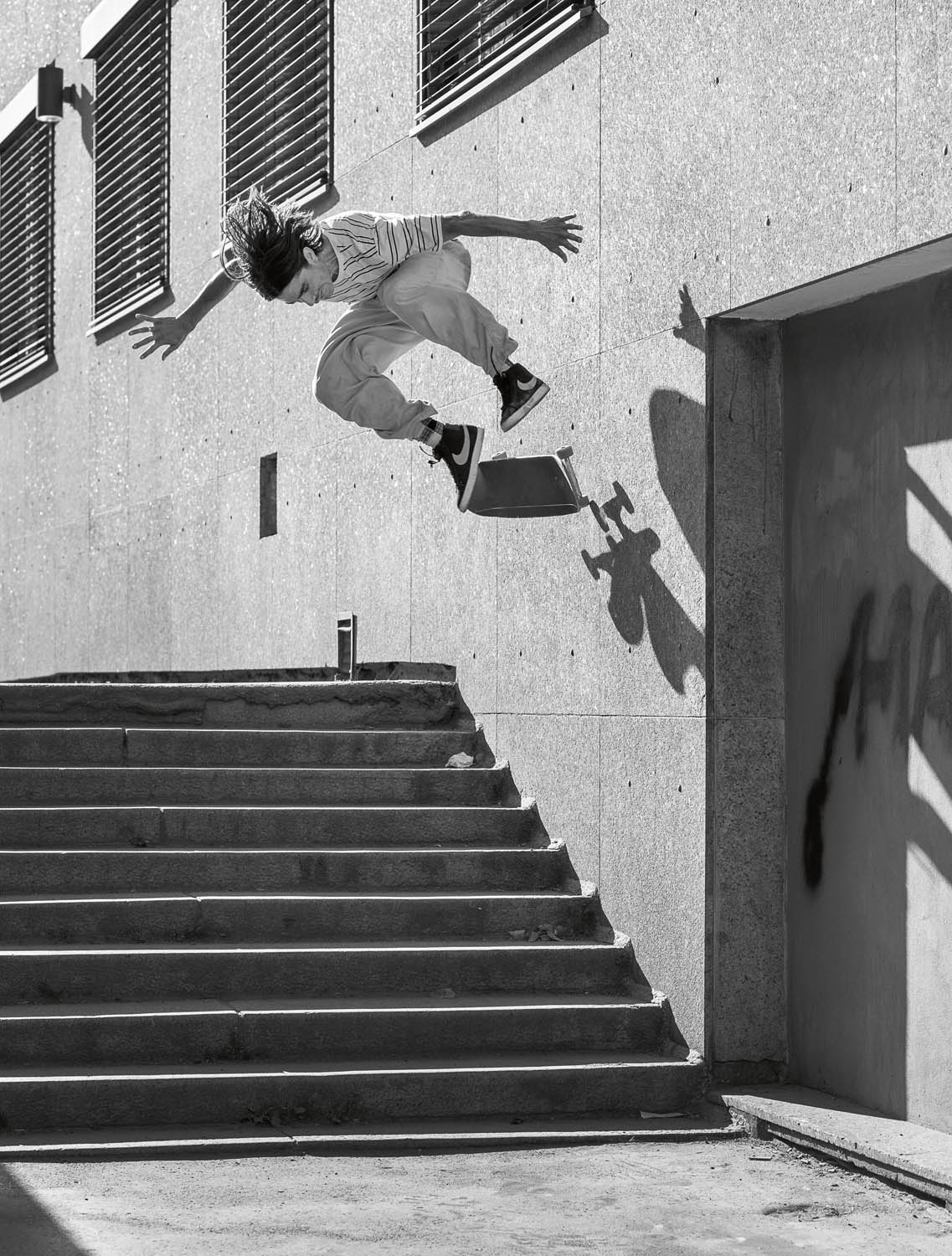 You have such quick feet and your style is so free flowing, like a leaf blowing in the wind – you bounce here jump there and slide around… Do you plan out tricks or lines you wanna film?
Ha ha, thanks Lou. Yes when I film a line or a trick I always plan out before what I’m going to do. But I usually take a good look at the spot and try to figure out what will be the best way for me to use it. But if I’m not filming or for example skate a contest I’m never thinking about what I’m going to do; I just skate and hopefully my feet land in a good position for the next trick.

How’s sponsored life been treating you?
I couldn’t ask for much more; it’s treating me really well. It’s pretty much more than I ever could ever imagine. I’m so thankful for all the help from my sponsors. 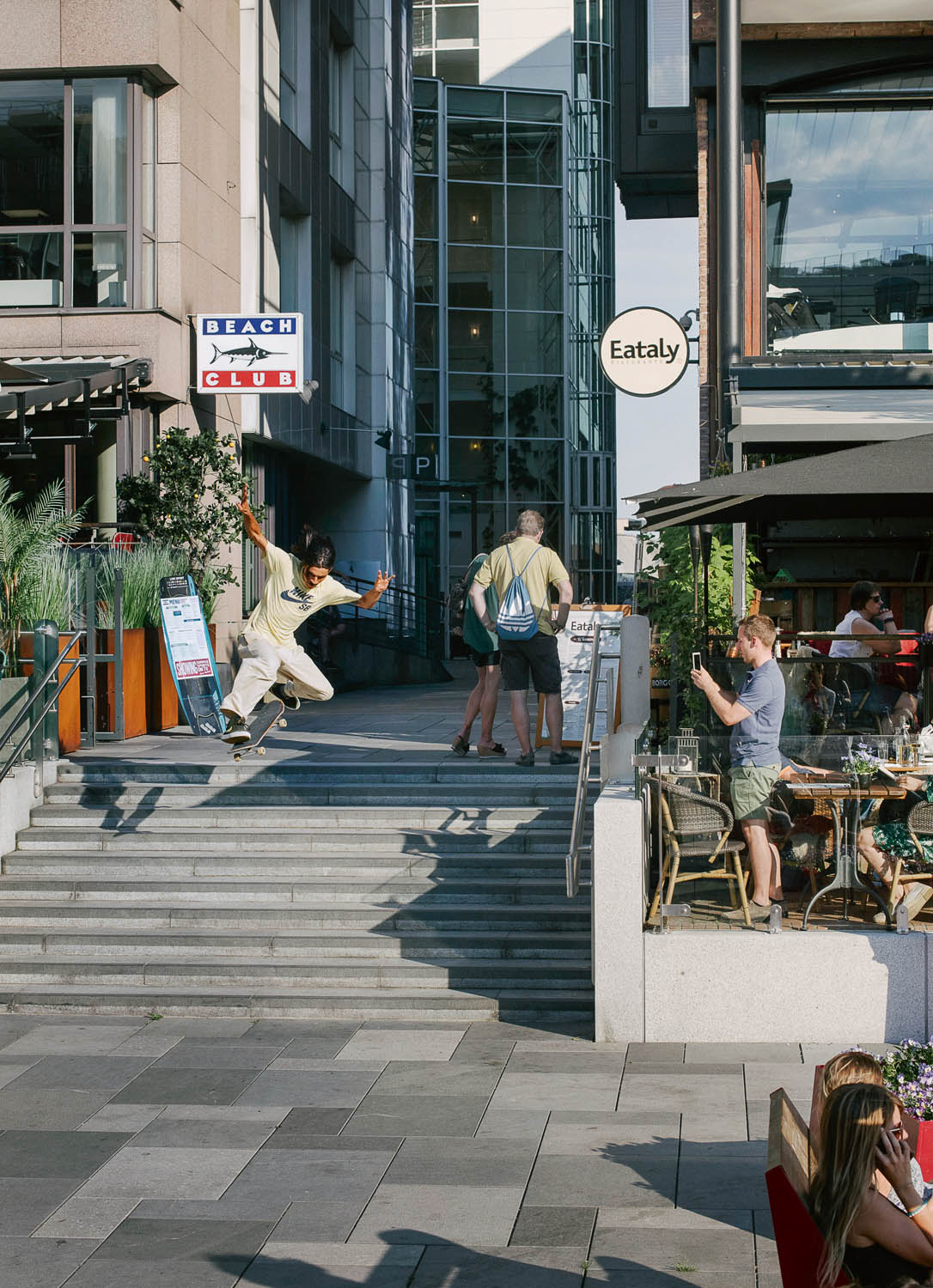 On every enjoi trip you seem to be the guy getting the most footy. You seem like you are very driven and have a strong work ethic… Where does that come from?
I will say my parents are super structured and they have a strong work ethic. I took mostly everything from them I guess. But also when you travel to spots that are super good or I just like the way it is, I don’t want to sit and look at the spot I want skate it and hopefully get a trick on it. You never know if you’ll be able to skate exactly that spot again!

I remember Wieger talking about you years ago and saying ‘there is this flow kid from Norway; we should put him on’. Talk us through how you got on enjoi.
Love you Wieger! OK first of all I have always been a big fan of enjoi. All the videos, ads, team and enjoi in general and yourself have been a big inspiration. All the way back to Bag of Suck and all that, thanks for that! 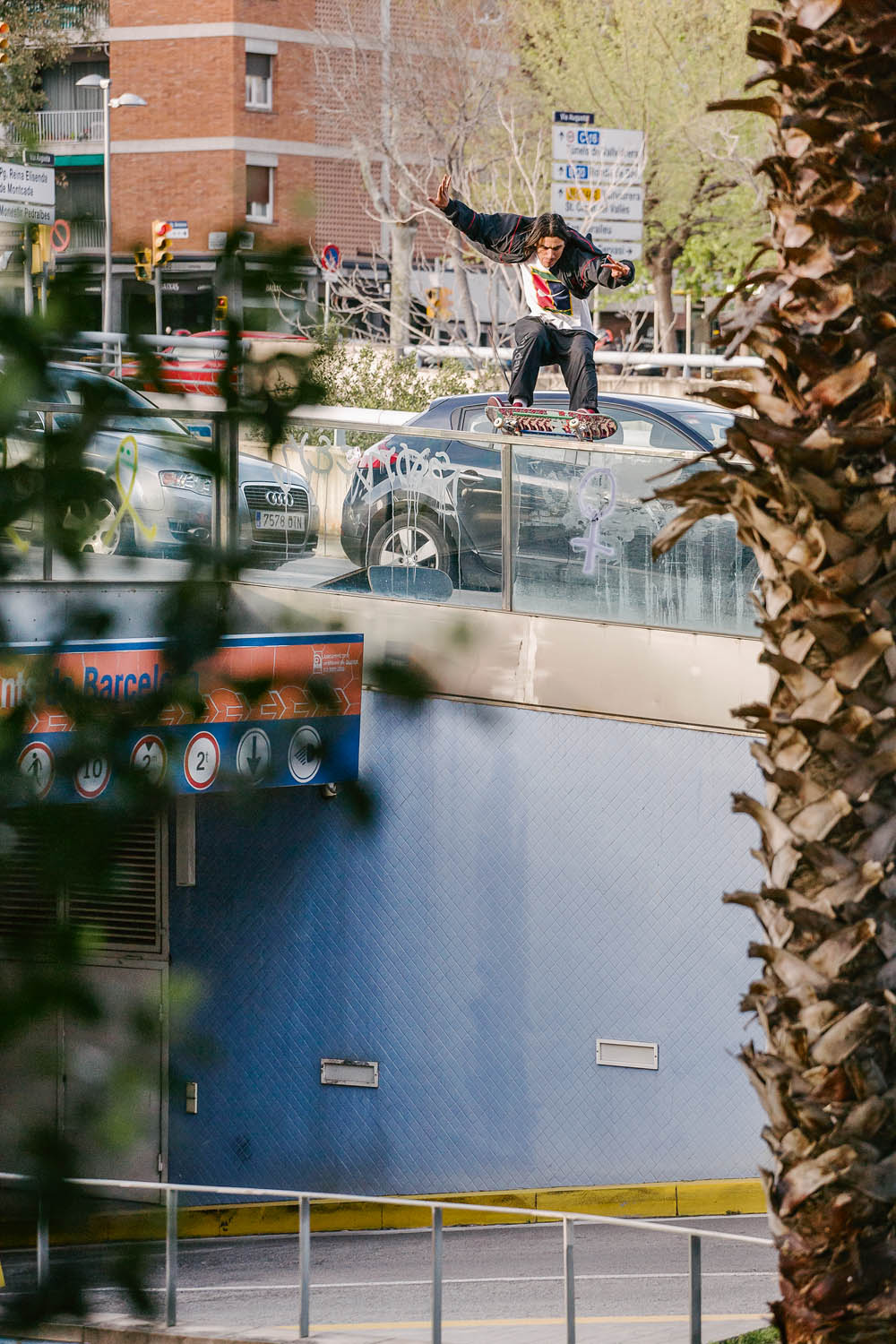 Aw, thanks Deedz, I love the way you ride too!
So I’ve known Thaynan (Costa) for a long time now, we used to go to all the contests in Europe, Tampa Am, etc. together. And so we became really good friends… He’s my brother from another mother! And he was starting to get enjoi boards at one point, so after a bit he put in some good words and introduced me to Scott Howes the TM for enjoi in Europe. So we emailed back and forth and I showed him my footage and that was pretty much it; he gave me boards for around two years and he gave my footage to you and you started flowing me boards from the US. I went to your house and stayed there for a couple of weeks and after that I went on my first enjoi trip to Budapest and met the rest of the team and it’s been a good time ever since. Love you guys, cheers! 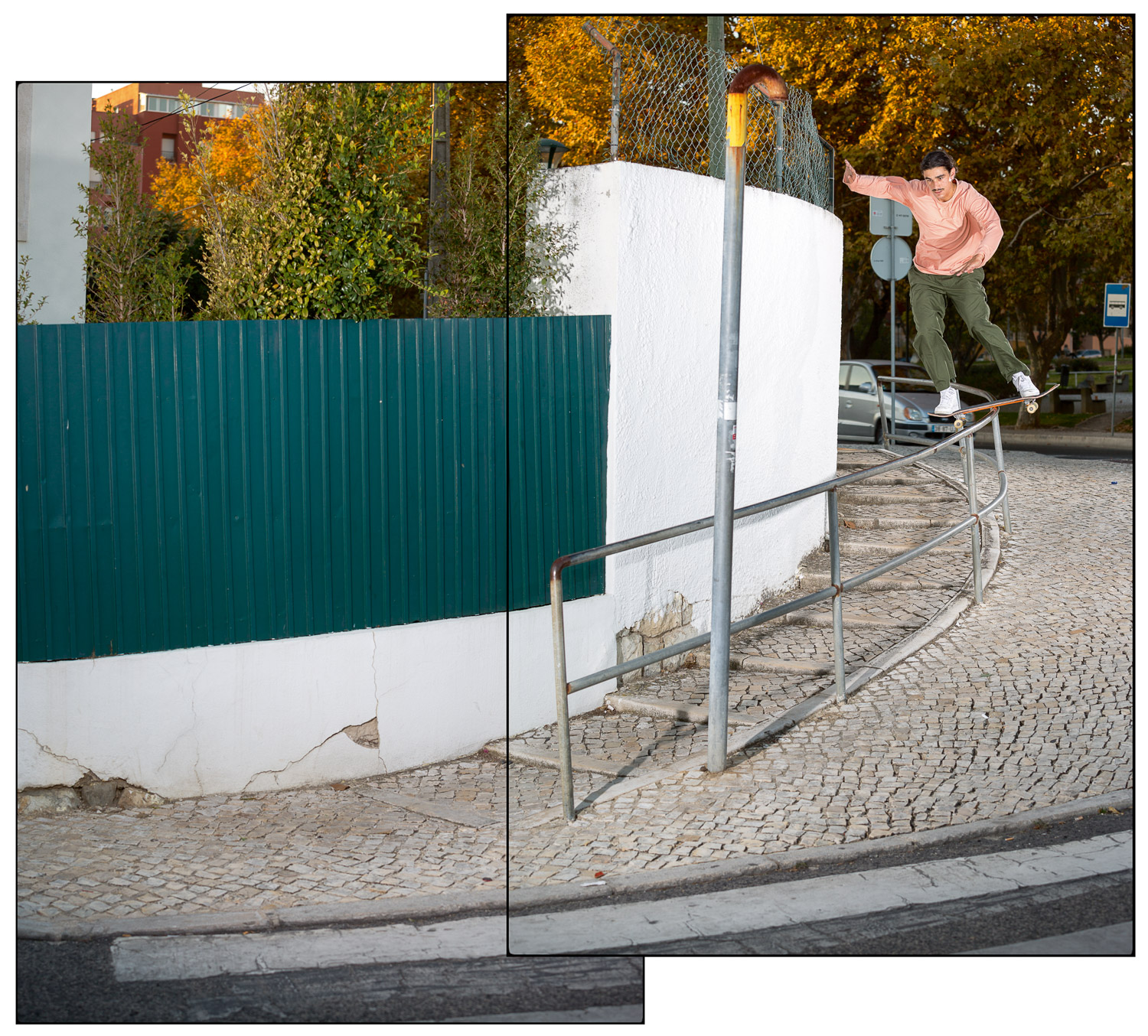 Yeah man, seeing you around the whole team and everyone clicking with you, I remember telling you on that trip you were on the team! It’s funny ‘cause just being really talented isn’t everything, you got to bring good vibes to the session and have fun and in Buda’ it showed you were a perfect fit for enjoi. It is still funny to see you use any excuse to skate with no shirt on, ha ha ha… Are you allergic to shirts?
Yes I’m super-allergic to cotton! No I’m just joking. I don’t know, sometimes it’s just so hot that I hate to have a shirt on; it gets all sticky and sweaty so I’d rather wear it on my head and be shirtless. 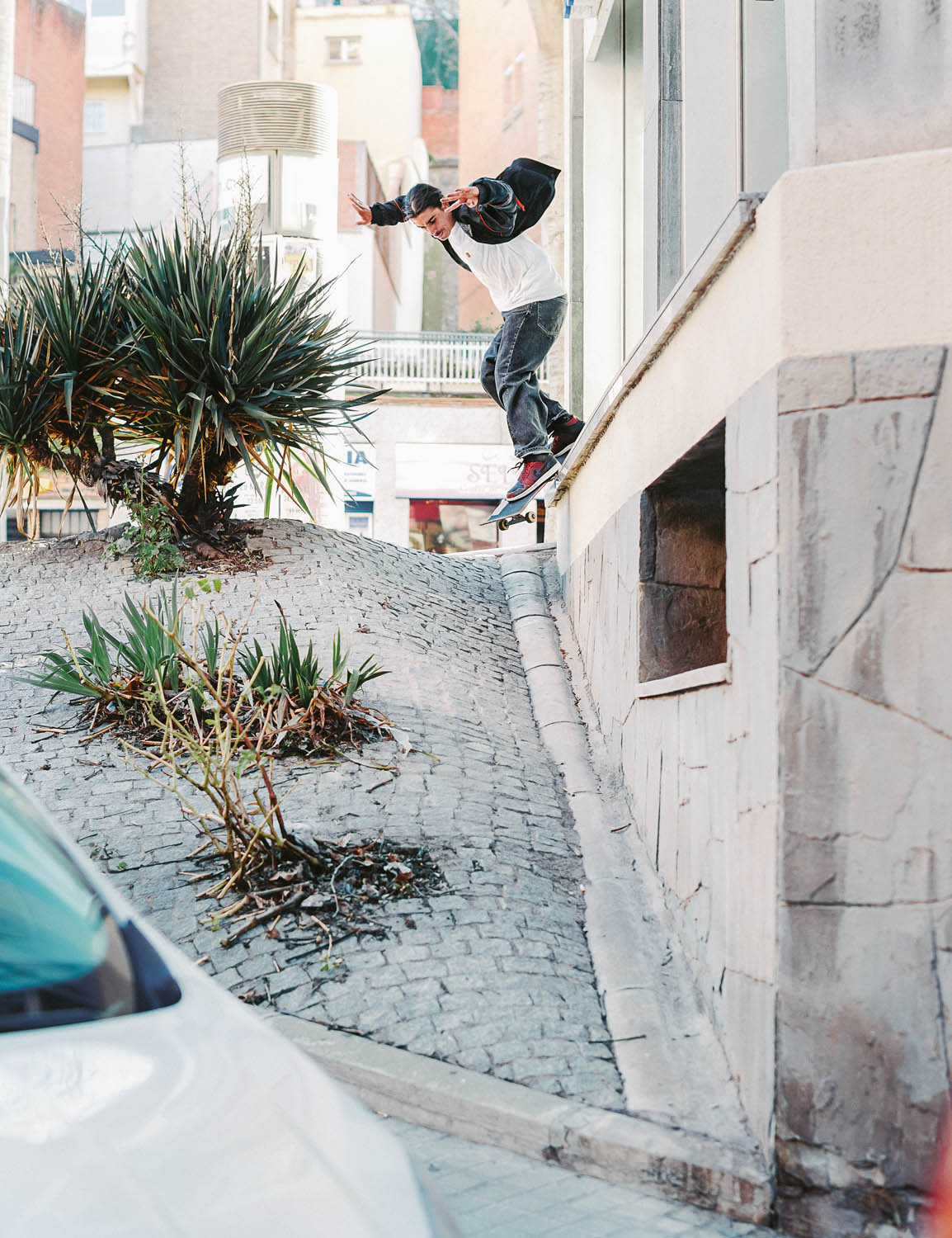 What got you hyped to start riding rails? Do you always skate with rails now?
I remember my friend Pekka had some rails on his board once a long time ago and I remember I saw him slide forever and also do weird combinations and so I just had to get myself a pair. So I tried it out and I never stopped using them. It’s been like three straight years now and I’m never going to take ‘em off! I love those things – so much fun!

Well that and maybe because enjoi makes the best rails! Ha ha ha. Speaking of rails, what’s up with the Freddy Mercury moustache?
I don’t know, sometimes I try to shave it off, but after a couple days it comes back, ha ha.
Oh man! OK Deedz thanks for the chat. Any thank yous?
First of all I would like to say thanks to all my family and especially my mom and dad, all my friends around the world I would like to name drop all of you but the list would go on forever so, you all know who you are! Love you guys! Thanks to all my sponsors, everyone at Nike SB especially Colin and Vaughan, everyone over at enjoi, big thanks to you Louie, smoothiexchange, Bones Swiss, Jessup, Spitfire, Independent and everyone that’s been helping me over the years!
And to you guys at Free, thanks a lot! Much love! 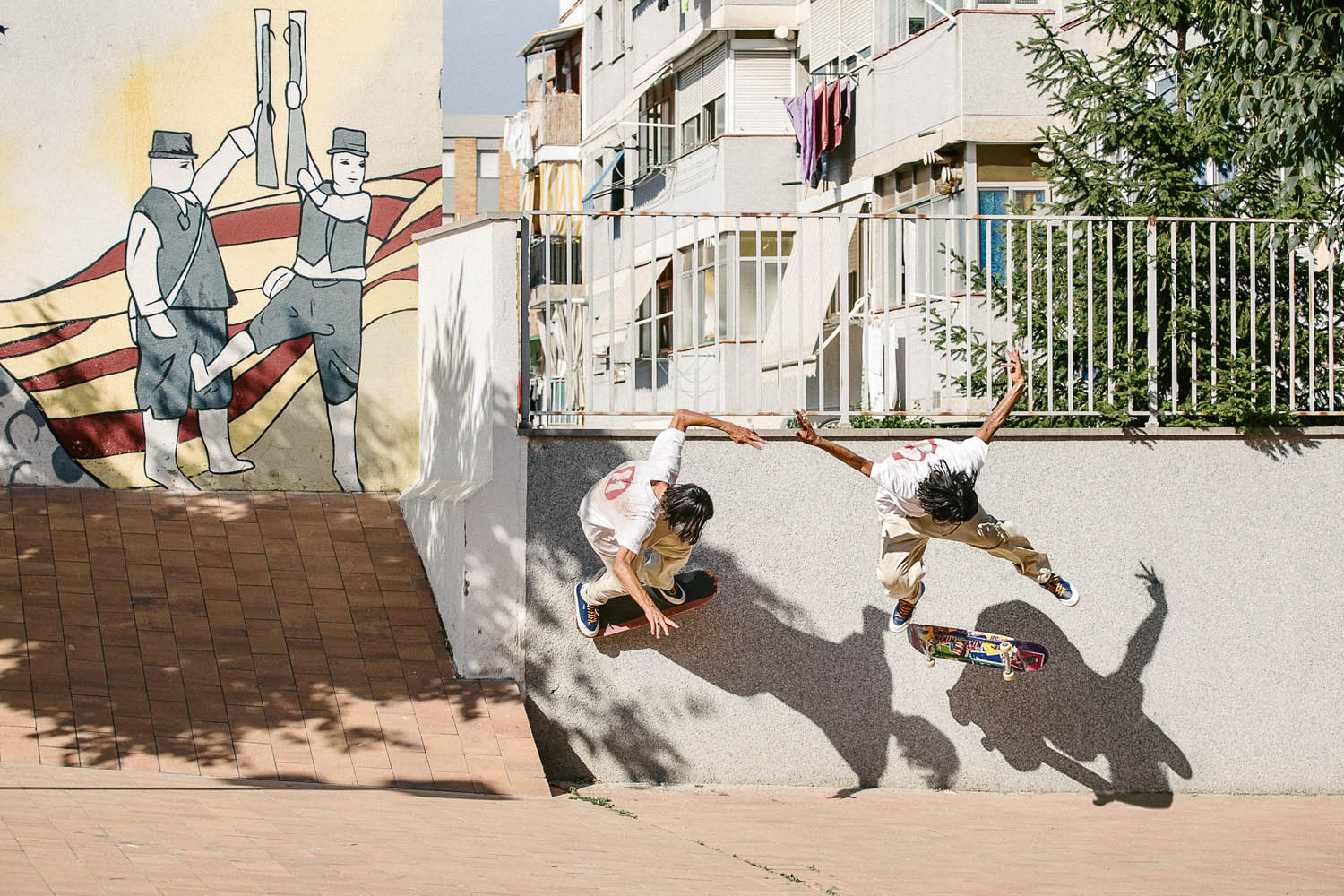