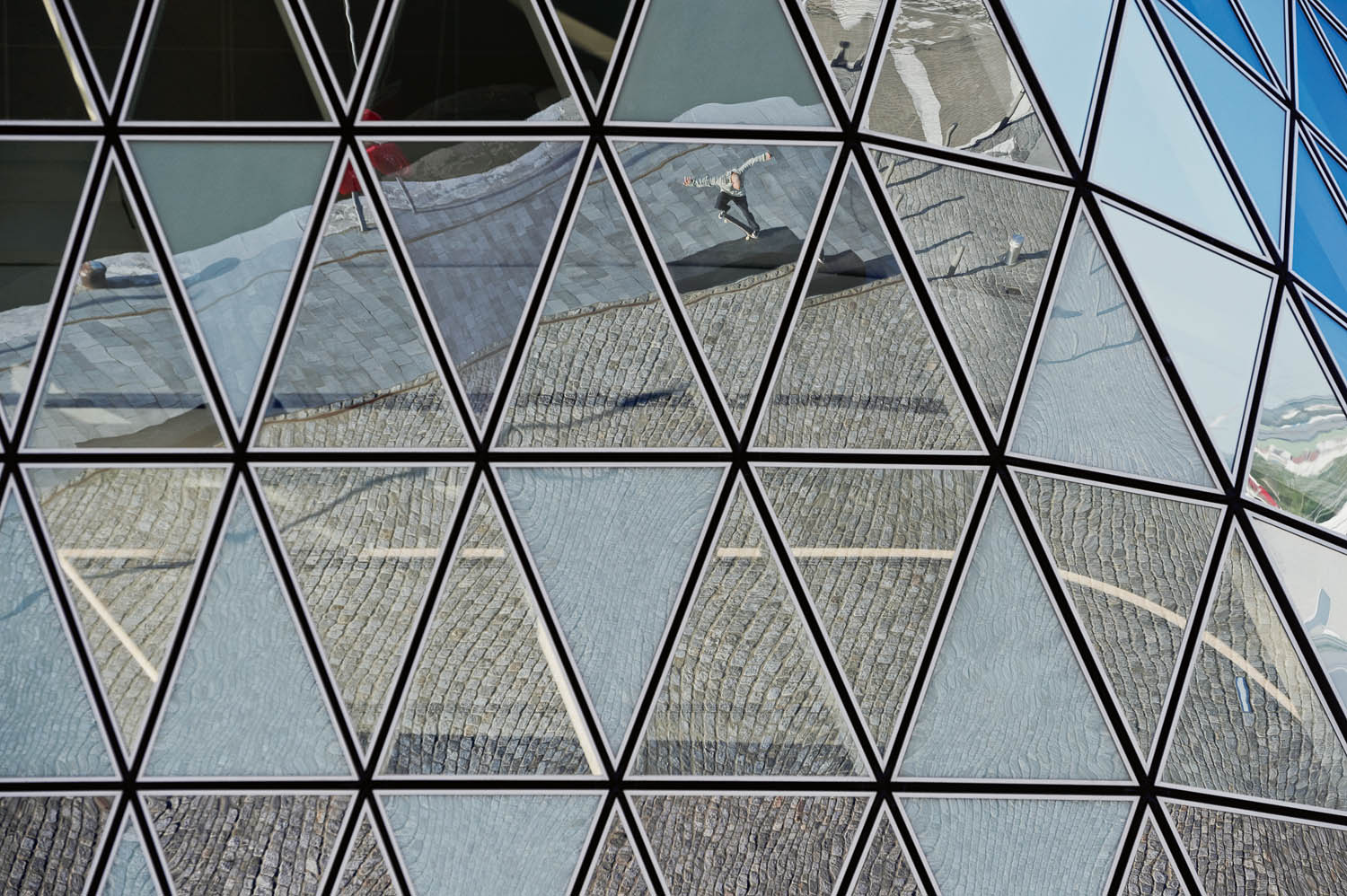 Frontside crooked grind. All photo (click to enlarge) are by DVL unless stated.

I met Yeelen something like four years ago through Bram De Cleen. I remember that Bram was really impressed by his skating. Bram has special tastes sometimes, I can’t say I agree with him 100% of the time, but I do concerning the fact that Yeelen’s skating is impressive. They were both living in Antwerp at the time – the city where Belgian people are considered snobbish by other Belgians. I’ve once heard this sentence in van full of Belgian mates: ‘Antwerp is the city and everything around is the parking.’ Well maybe you know something you didn’t before reading these lines, but it is not useful at all in talking about Yeelen. I’ve been on a few missions and trips with him now. Yeelen is a talented but humble and quiet guy. I like interviewing people and even more when we’re friends but I have to say Yeelen wasn’t an easy one. After those few years of friendship, he still remains a bit mysterious in my eyes. But sometimes it’s also cool this way. So, I need to be honest: if you read these lines you’ll be able to get quite a true picture of his daily life and current projects but you won’t be chilling inside his brain. If you’re a bit disappointed, just keep focusing on the pictures!

First things first, you are now living in Antwerp, were you born and raised there?
Yeelen Moens: Yeah, I was born in Bechem, a small town near Antwerp. Now it’s been a few years that I’m leaving in the heart of the city. I live right next to the central station, way better for skating and everything else too!

How would you describe it?
I have to say that it’s pretty polarised over here. There’s a big contrast between summer and winter. In the summer there is a lot happening, but in the winter people get a little bit depressed. So I’m trying to escape from that as much as I can. But yeah, I’m pretty happy living here.

Have you ever thought about moving somewhere else?
I’ve been thinking about it a lot, especially to a warmer place. But I feel like it’s a brave and hard move for me to make. You know, I’m still in my comfort zone here… 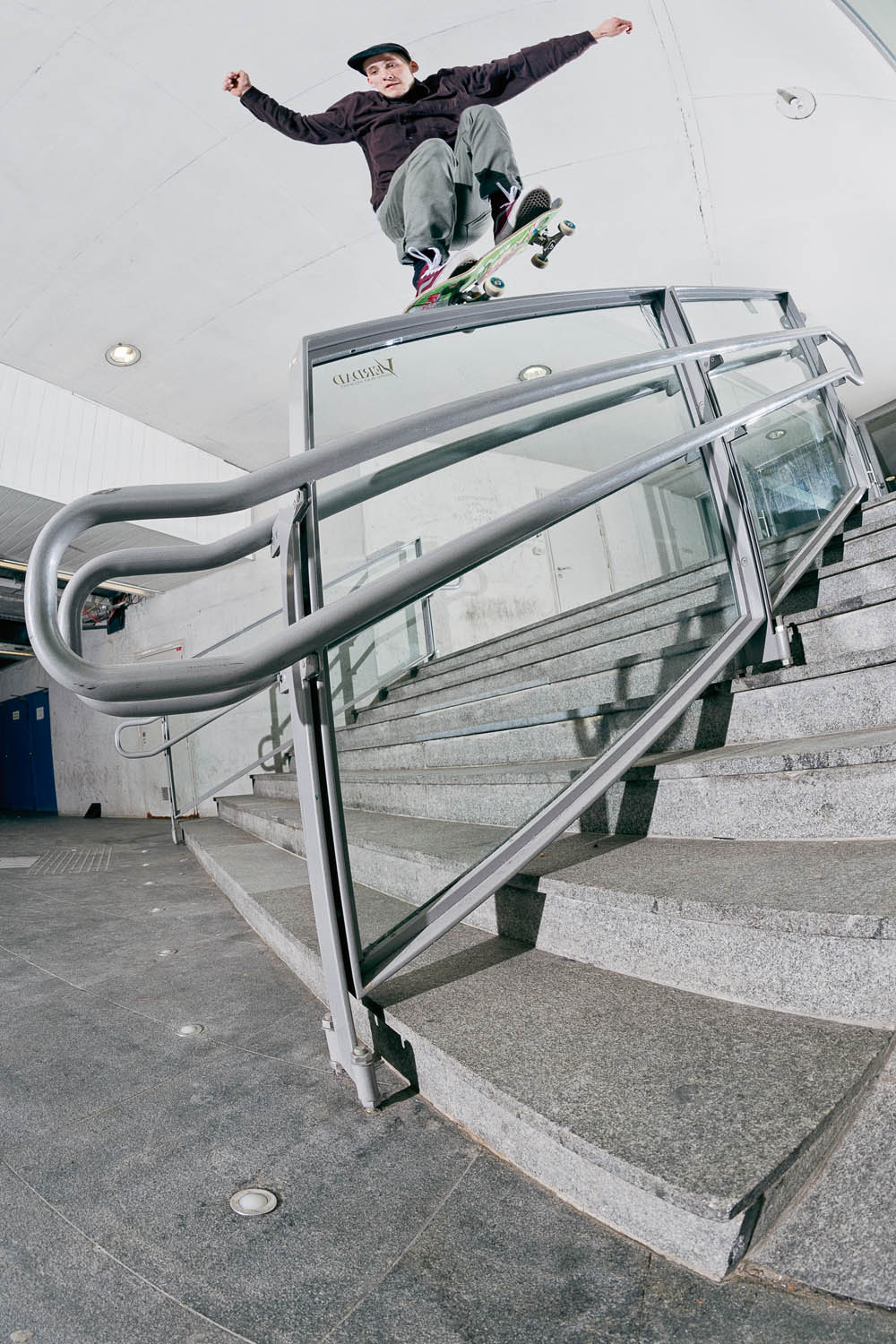 Sometimes it’s hard to leave it!
I guess you felt the same living in Lille,
didn’t you?

Of course, I really wanted to move to Paris but it felt a bit hard too. In the end it was quite easy because I met my girlfriend and she was living there already. So it made the whole thing quite natural! But let’s talk about you… What are you doing at the moment? What is your daily routine?
I’m training a lot actually. I have a weak ankle. I’ve always had troubles with my right ankle and the pain kept coming back. I now feel like I have to really take good care of it. I’m not that young anymore. I mean, 26 is young, but I feel that it’s time for me to take good care of my body. I just want to be able to skate as long as I’ll be able to. I’m planning to go back to the physio therapist soon too. I’m using the balance board a lot, stretching and have been doing yoga for a few months now. It’s just all about getting into a good healthy routine. 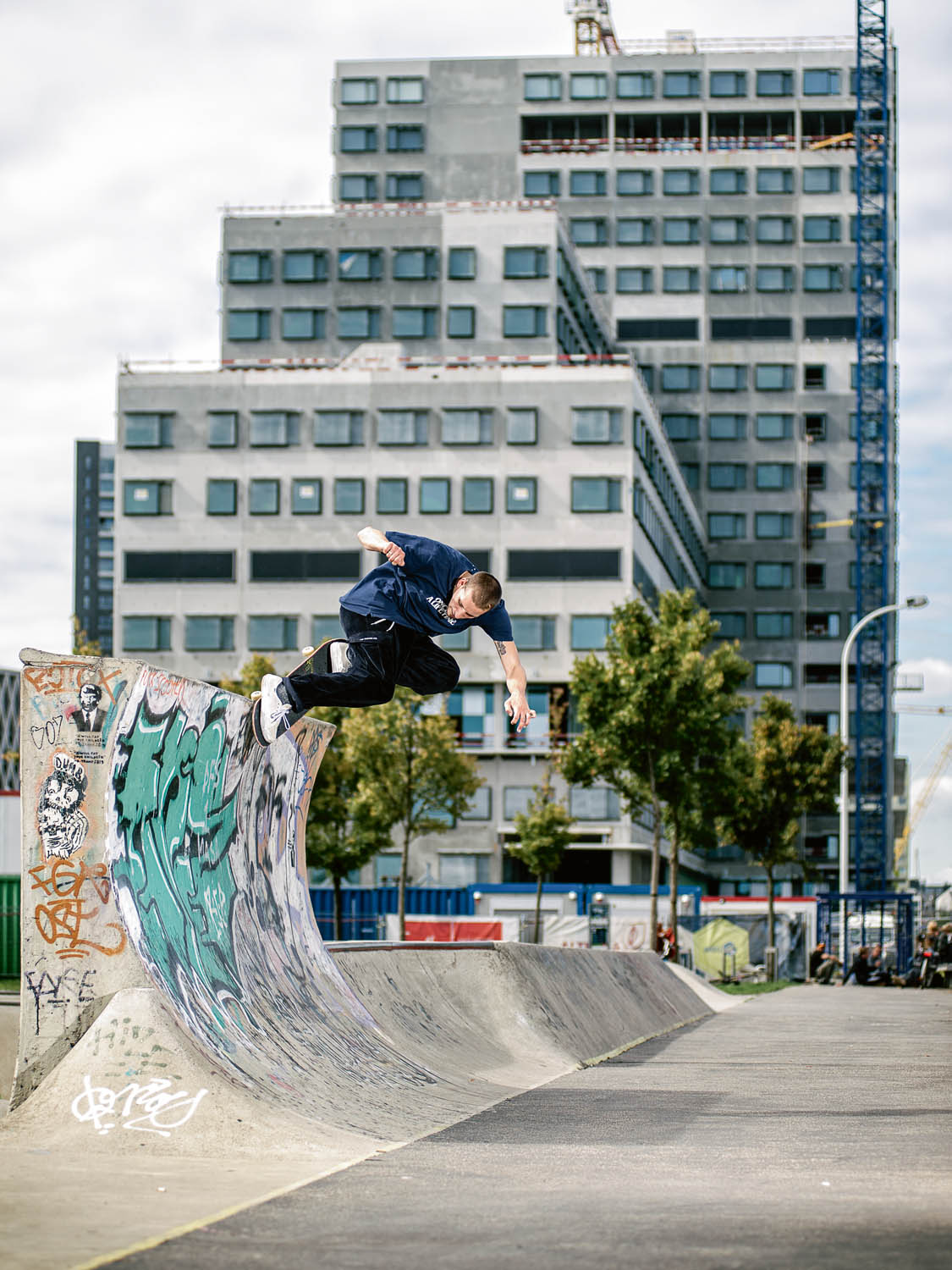 Anything else going on?
I’m also tattooing. I really want to do something with it. I’ve actually been doing it for a year and half now. I started with stick and poke. Then I bought myself that cheap machine six months ago to try it out. Now I’ve just bought a better one and I’m still saving money to get better gear. I’m really into it.

Are you working in a shop too?
No, not yet. But that’s my goal. I need to work on my portfolio first. I want to come up with something that I’m really happy with. I’m trying to define and get my own style you know, but it takes some time and it’s difficult. 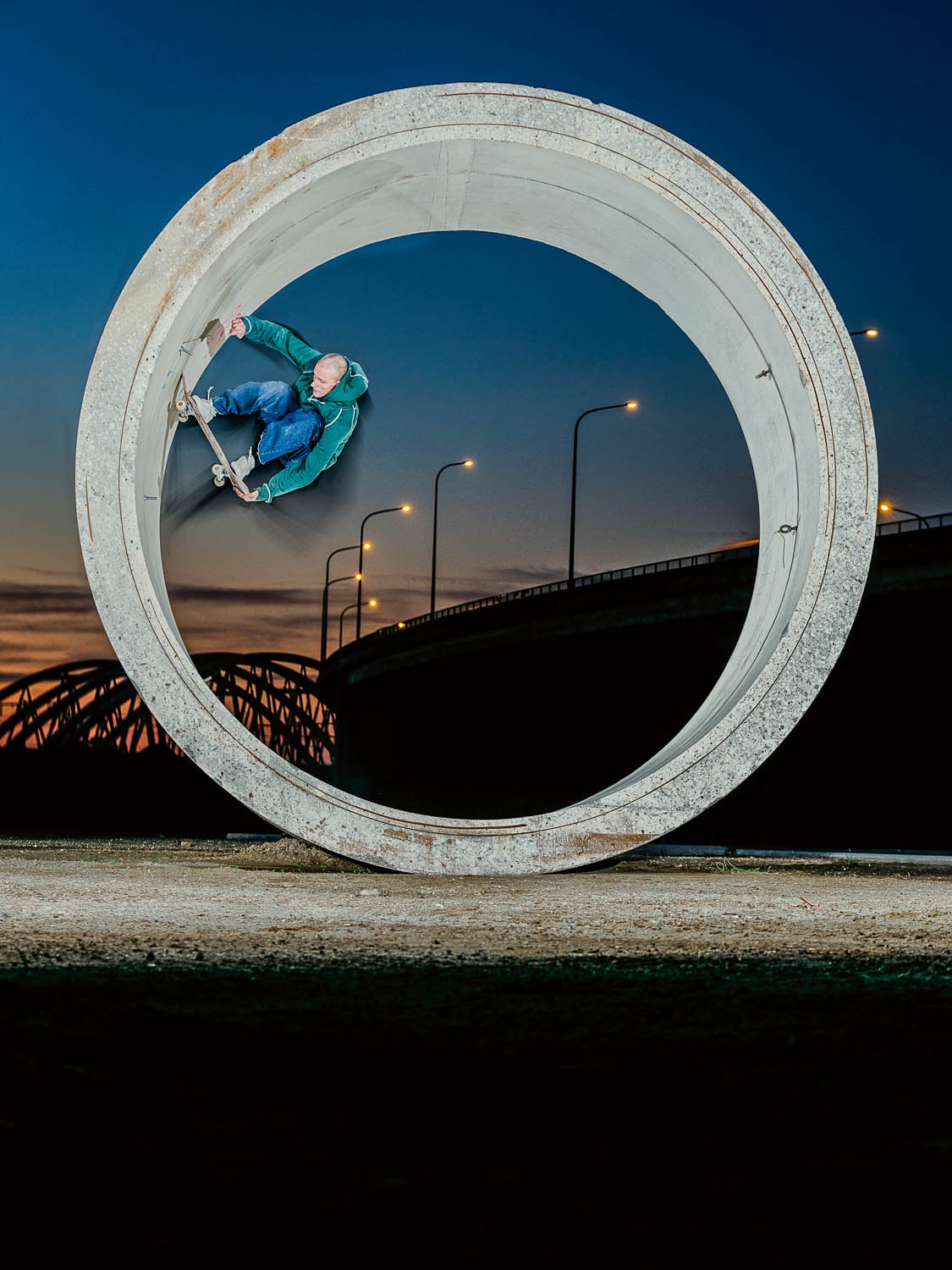 What’s the portfolio going to consist of?
I wanna get a combo of flash and tattoos. Some tattoos but also drawings; it has to be both actually. Then when I’m done with it I will be able to start an internship in a shop. I already have quite a few good connections with people in Antwerp so I’m not too worried. I only need to come up with the proof that I’m able to work properly. I also need to start a class to get the hygiene certificate otherwise you’re not allowed to work legally. It’s working out slowly but surely. I’m still a beginner but I’m enjoying that a lot!

Do you feel kind of the same motivation tattooing that skateboarding brings you?
Yes, I’m trying to put the same energy that I put into my skating. I feel like it’s easy to compare both of them. Travelling wise for example, it’s perfect to combine both. I’m thinking
a lot about doing that. 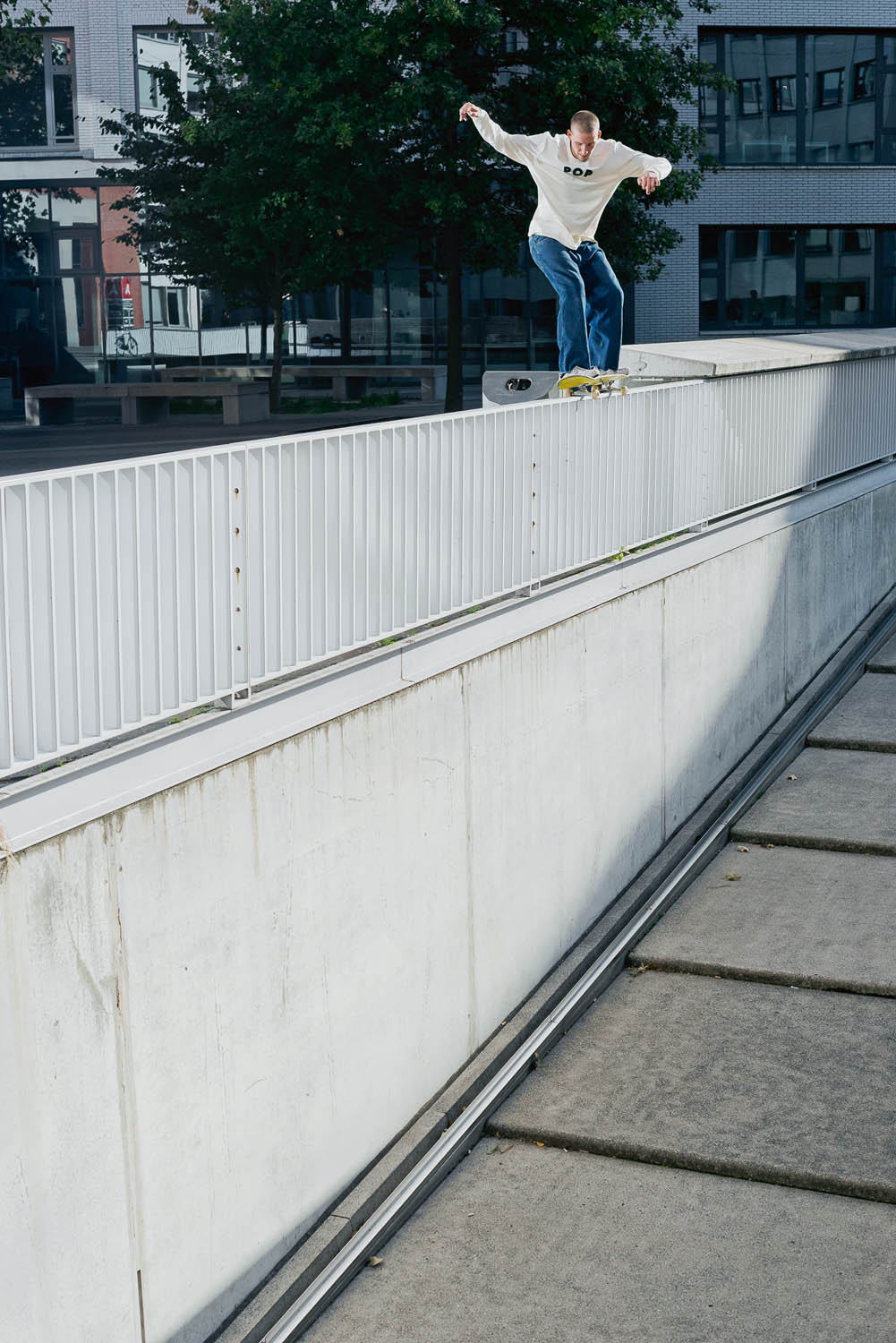 What was it like shooting with Davy for this?
I love shooting with Davy. As a kid I remember I was a bit afraid of him, ha ha. He was just this gnarly guy and shouting at people but impressionable at the same time. Then I got the chance to go on some tours with him and I got to know him properly. He’s actually super nice and now we get along really well, plus we share the same interest in music. I think Davy’s the best, it can be frustrating to shoot with him but you’ll always have a good picture at the end. He’s a true perfectionist.

You have been working at Lockwood for a long time right? How would you describe the impact of the shop on your life?
I’ve been skating for Lockwood for quite some time now, it must have been like ten years altogether! I quit working there a couple years ago though. I was just over it. It got me less motivated to skate at some point. I worked there for about four years. I started as an intern then I went from full-time to a lighter shift. But the routine drove me crazy in the end. I guess you must know exactly what I mean…
Of course, but every reader doesn’t necessarily.
But it also brought me a lot and shaped me as a skateboarder. The team involved behind the shop are dope people. The whole crew around the shop are my skate mates still. It’s actually a big crew. I’m really grateful for everything they did for me. 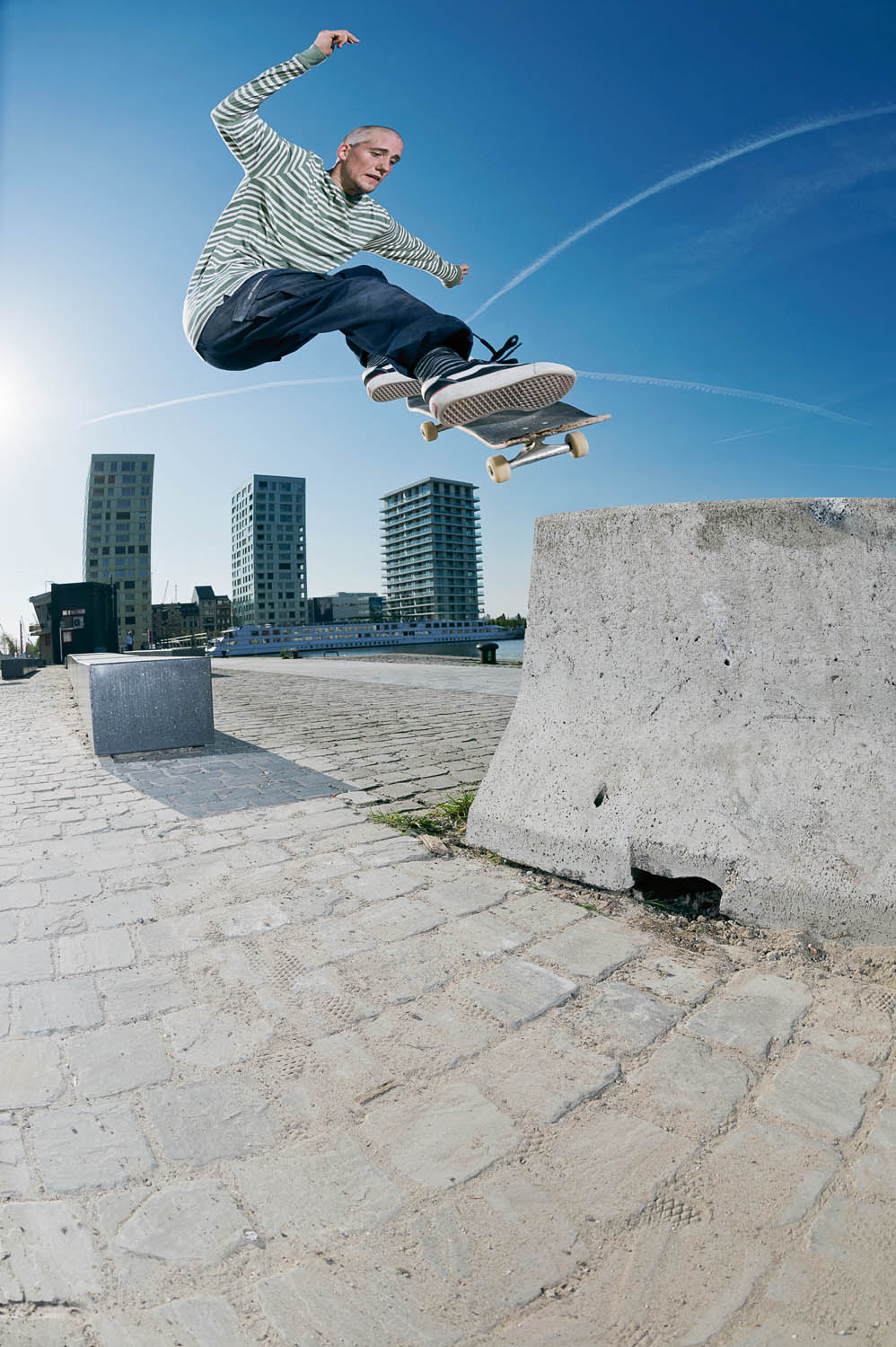 Ollie into the jersey.

You’ve recently been to LA, can you tell us about that trip? Was it your first time in America?
It was my very first time in America, we went there with a nice small crew and we had a good time together. It was cool to skate there in this completely different environment made out of smooth concrete. Skating under the Cali sun was hard sometimes though so there was some chilling involved too. My girlfriend was there coincidentally at the same time because she was visiting her dad so we were able to hang out together, which was a good point too. It’s been a crazy experience: the freak shows at the beach, the crazy billboards, the cool sign paintings over there, the crazy cars… Good memories.

So you skate for Antiz, how did you end up there?
They were touring in Belgium and passed by Antwerp so I met part of the crew while shooting with Davy.
So we skated together and from there they asked me if I wanted to join them in the van. I was very
stoked about that and then went to Liege with them. From there it kind of just happened.

Well I think it’s a good fit. I was also wondering about one of your other sponsors… How did you link with the Pop Trading guys?
I’ve been skating together with Alex Raeymaekers and Willem Dirks a lot and they’ve been skating for Pop for quite awhile. So I met the rest of the guys through them as well. I was getting clothes at the time, but then I got asked to skate for them. So I was stoked to do that because my homies were skating for them and they were doing cool things so I felt it made the choice easy. 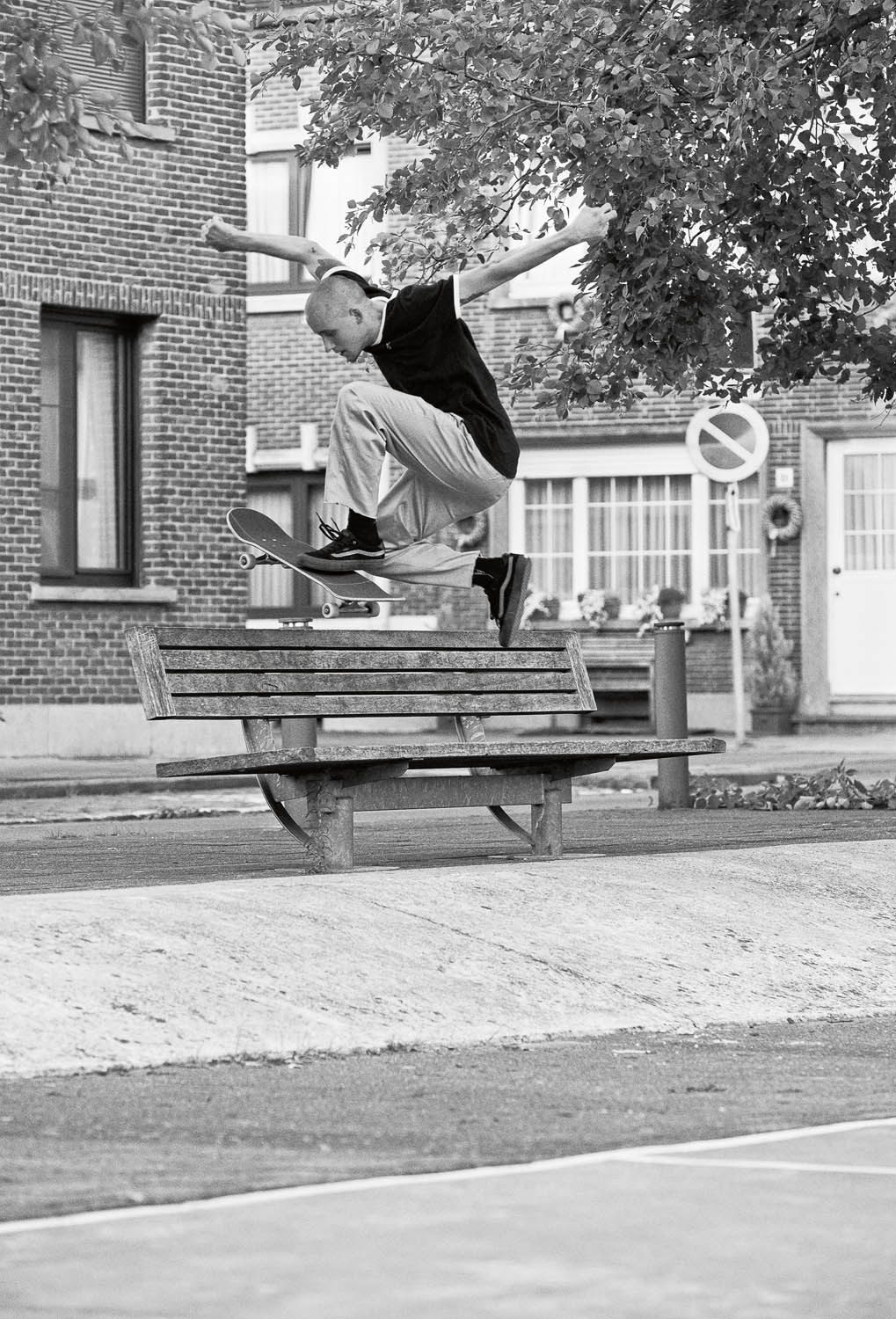 You do some creative/different (if those adjectives are still relevant concerning skating nowadays) kinds of tricks sometimes… Where do you get your inspiration from?
Ha ha! I don’t really know; it seems to me that I’ve always been skating a bit this way. Of course I get inspired through watching videos but to be honest I don’t watch too many of them. I feel like inspiration comes more from my homies and my surroundings. I would say my inspiration comes from everywhere inside and outside of skateboarding.

After this interview, what do you have lined up?
So the thing is, I have footage here and there in different projects, which is nice, but I’d still really like to put out a video part on my own since I’ve never really had that. I’ve got a bit of footage on the side already, but still need a lot, so that’s what I’m going to work more towards to.

All right what advice would you give to yourself as a 15-year-old?
Spend your time more wisely and make sure skating stays your number one priority.

And what advice would you give to the 40-year-old Yeelen?
Take it easy old man, better stay on that mini-ramp!