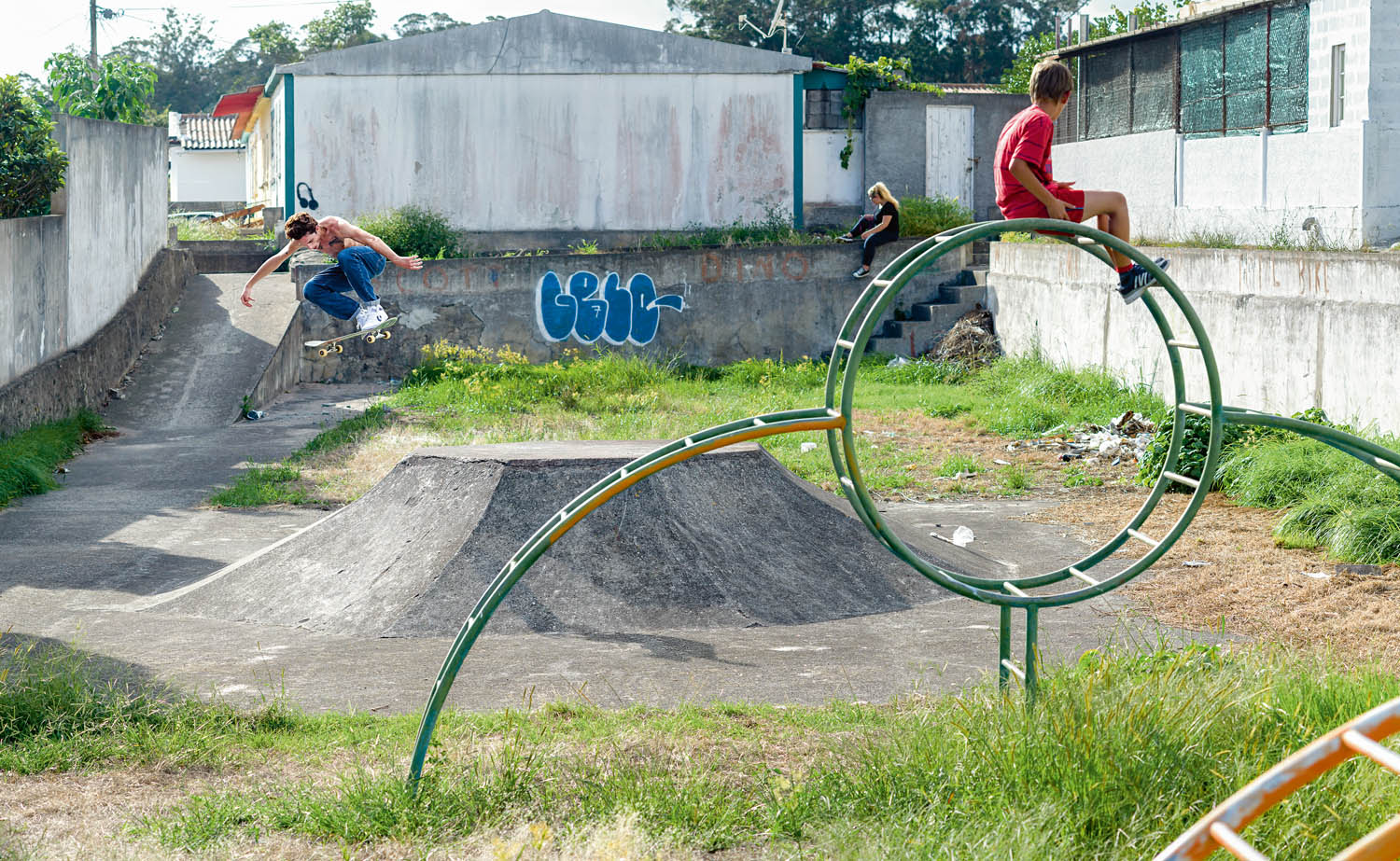 Sail west from Lisbon for 850 miles and you’ll come across the volcanic islands of the Azores. Centuries ago the Portuguese settled these islands bringing their customs and cuisine to the region but also their penchant for that small white cobblestoned ground you find throughout Portugal. If you’ve ever been to Lisbon you know this ground, it’s called calçadas and it sucks for skating. But that didn’t seem to deter the Tangram guys from heading to these remote islands in the middle of the Pacific. In fact they found some pretty incredible spots by the looks of Gerard’s photos. After speaking with Octavio Barrera and Dani Millán I take it those tiny, rough, white cobbles weren’t too much of an issue.

Photography by Gerard Riera
Words by Will Harmon

Whose idea was it to head to the Azores Islands?
Dani Millán: I guess it was both of ours, because we did a trip together to the Azores about 4-5 months ago for RVCA. We were there for two weeks and we found a lot of spots. But we were there filming stuff for RVCA and we couldn’t really skate ourselves, so we knew we had to come back with the guys and try and really skate it properly.

So it was a RVCA trip, but it wasn’t a skate trip?
DM: No it was more like a volcanic escape… You remember that Lanzarote trip two years ago?

Oh OK yeah.
DM: It’s more like artsy stuff… Or rather creative exploration – this is what I call these type of projects. Mixing a little skate with visiting local craftsmen was the kind of direction. So on that trip I skated a little bit, but now we’ve come back on a proper skate trip.

Just skating as the focus and not searching for volcanoes and artsy stuff…
DM: Not this time.
Octavio Barrera: Yeah the other thing was more like a short film. 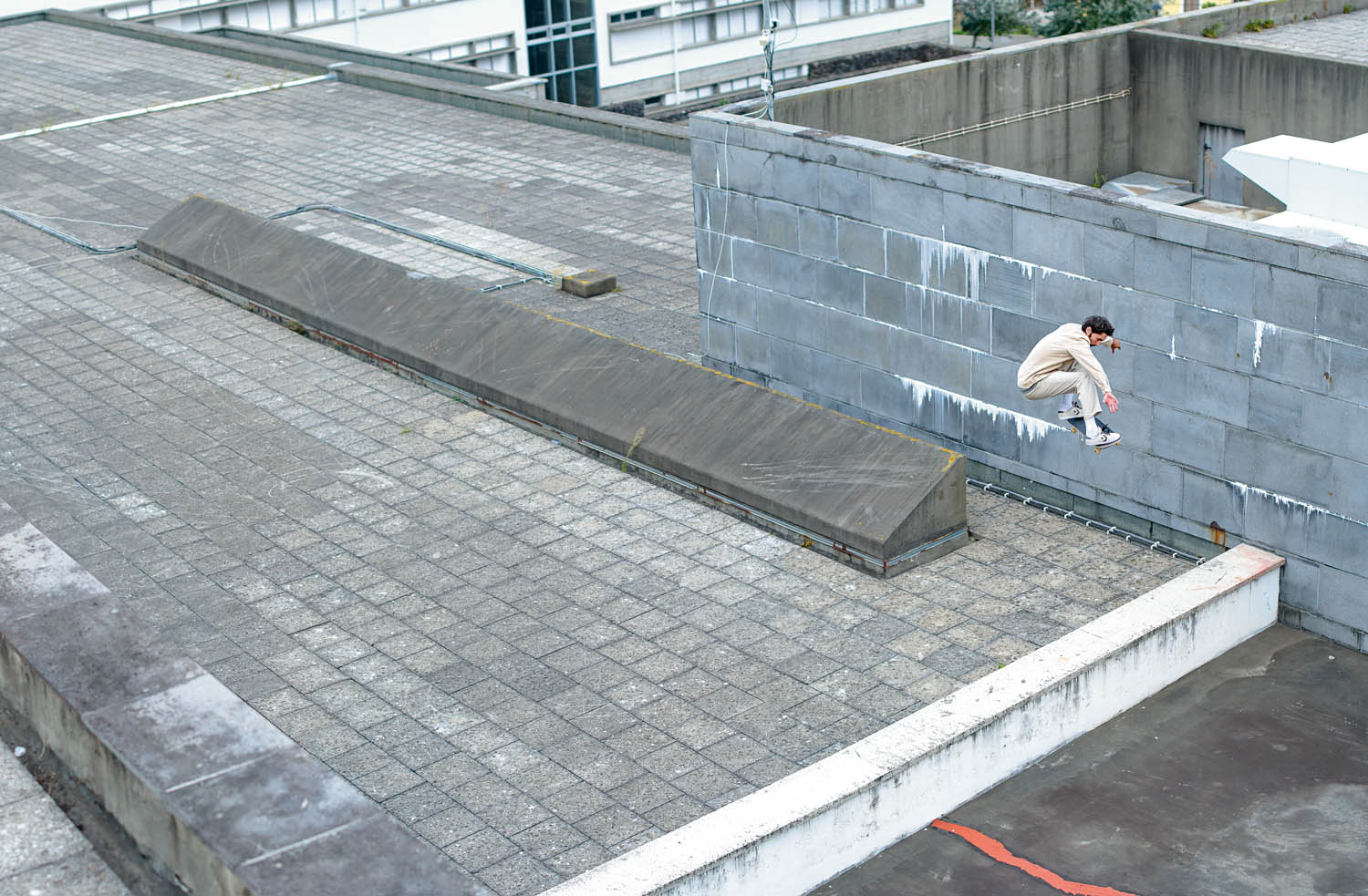 Octavio Barrera, ollie up and over, Terceira.

So I know there was another skate trip with Nestor Judkins and some Canadian guys to the Azores. Did you talk to Nestor before you guys went?
DM: Yeah we talked to him a week before we left. I told him we were going to the Azores and he was stoked. I asked him for recommendations and he was like, ‘dude I don’t know. We went on vacation. We were there for two weeks and we just pretty much skated what we found.’ So no tips, no nothing.
OB: The other thing is they just went to São Miguel. So in Azores there are nine islands so on that trip we visited two of them and the second one, Terceira, there is nothing. Nobody’s skated there before, maybe one or two guys around the school or something. It’s more rural. So we visited that island and there we found crazy spots.

Yeah so no skate trips had ever been to that island huh?
DM: Yeah I think no skaters have made it to Terceira, this second island. I know São Miguel has been skated by Nestor and there is a crew from Portugal as well that made a trip there two years ago, but I’ve never heard about anyone skating in Terceira. It was cool; we spent most of our time there.

So how did you guys find the spots? Did the locals show you or did you rely on your recon work from the RVCA trip?
DM: It was fifty-fifty. We knew a couple spots from the last trip, but we pretty much just drove around because the island is super small. We found spots that were not actually spots, but we were down to skate them. Some were pretty far out in the countryside… We were pretty much driving around and ‘fuck look at this! Stop here!’ and we tried to skate it.
OB: And it was crazy, the people there were super friendly and helpful. We never got kicked out…
DM: Especially in Terceira because they’ve probably never seen a skateboarder before. At the beginning they were kind of weird like, ‘What are these guys trying to do?’ but then they were super stoked to see people taking pictures, filming and skating. So we didn’t have any problems with police. We actually skated three spots in the airport. 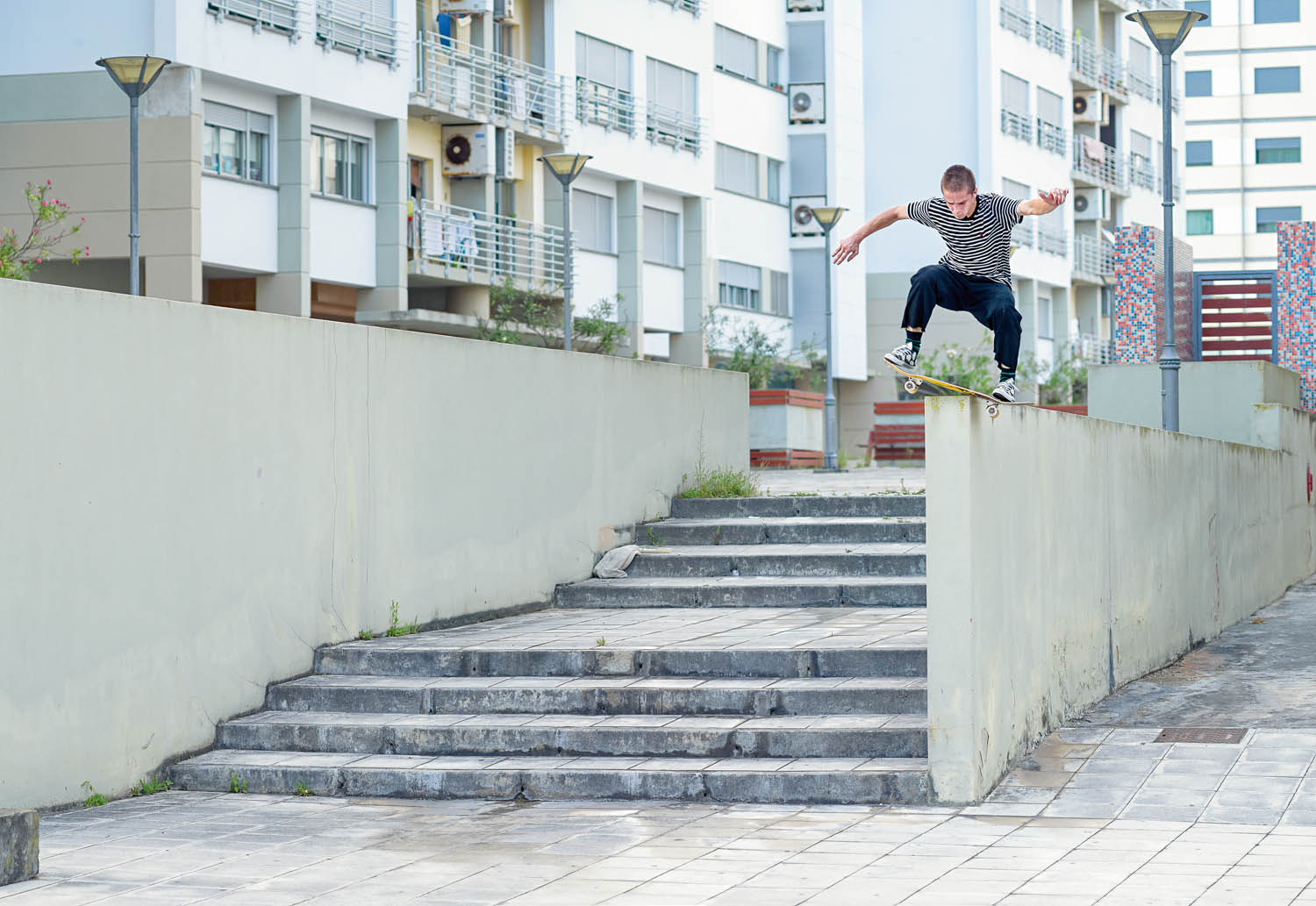 Wow the airport!
DM: Yeah and that’s pretty much the feeling of how the rest of the island was. The police were like, ‘OK, you’re cool.’
OB: Everyone speaks Portuguese there. I can understand it a little bit but Thaynan (Costa) came and he really helped a lot. He was really on vacation; he didn’t bring his board.
DM: Yeah Thaynan was hurt.

So what were some of your favourite things about the Azores?
OB: In my opinion, probably the vibe of the people there and the spots. The spots were just totally different. It reminds me of the Canary Islands a bit, with less people and twenty years ago. Some of the times it didn’t look like skate spots but you had to find something to do there. It’s not like a big city; there are no big buildings.
DM: Yeah we just saw one elevator.
(Everyone laughs)
OB: It was pretty much just small houses. With this kind of architecture you had to really try and get creative. 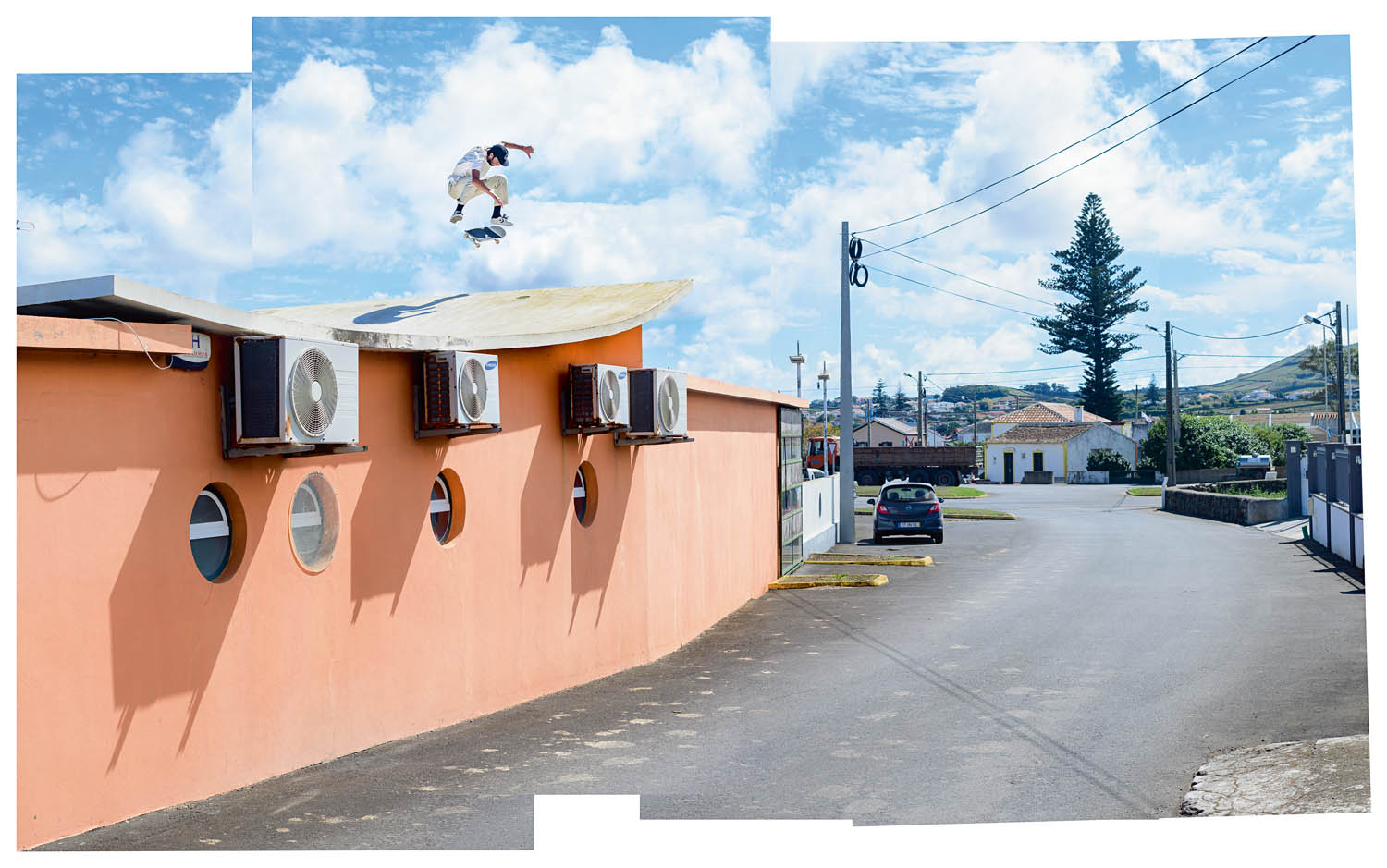 So with all you filmed over there are you guys making a new Tangram edit?
DM: Yeah the idea is to make a new video, but not super long, just 10-15 minutes maximum. And with that we want to change the concept of Tangram.

Yeah aren’t you changing the name from Tangram Wheels to Tangram Collective?
DM: Yeah that’s maybe not the final name, but we want to change from a company to a collective. We are not going to keep selling wheels anymore, but we are still friends and we want to keep doing projects together, exhibitions, videos or whatever. We want to keep the collective group of friends, but fuck the wheels, ha ha. This way we can invite other guys like Felipe or Viru, even though they’re not on Tangram.
OB: Yeah it’s not just attached to selling wheels and promoting your company…

So with the collective you don’t have to be as strict.
OB: Yeah pretty much like that. We are still keeping the website. But we have a problem with our Instagram account: it’s not working anymore.
DM: We got hacked a month ago. We pretty much lost our account. And also the last stock of wheels turned yellow from the sun…

No!!!
DM: Yeah so there were a couple steps there where we decided that we had to change something. It’s time to move on with the same group of people, but let’s extend the concept a little bit.

Ok so tell me a little bit more about the Azores… You guys got good weather? How was it there?
OB: It’s a little bit colder and humid. The islands are super green. It’s pretty much a mix between the Canary Islands, Lisbon and Ireland probably. The weather would change super fast…
DM: We were lucky because it didn’t rain that much. Before we went we checked the weather and it looked like it was going to rain for seven days but it only rained once. Plus we were on the volcanoes and stuff that day so it didn’t matter. It was cheap there too; you can still get a coffee for 70 cents. You get a Coca-Cola from the vending machine at the airport for 80 cents! 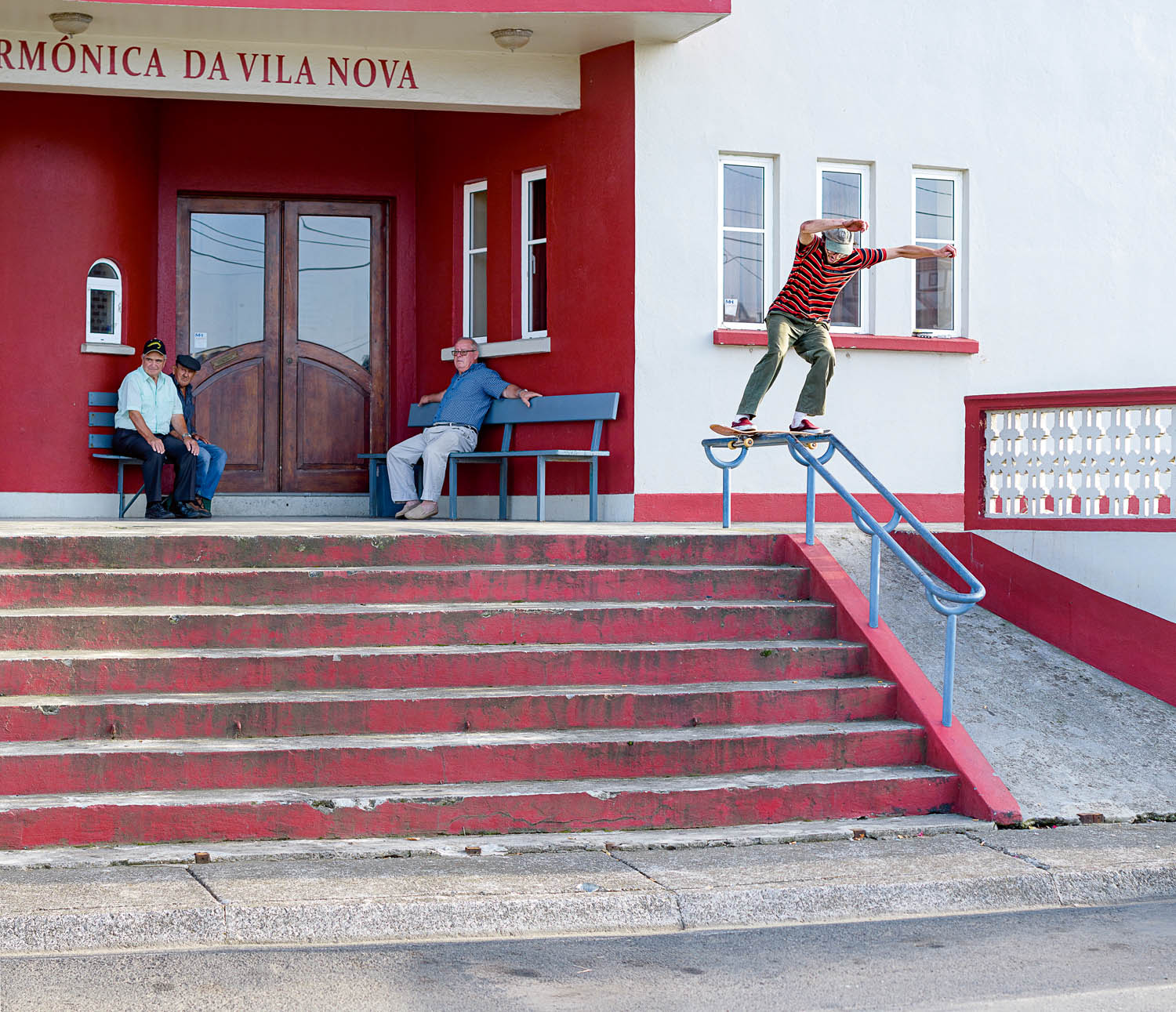 That’s incredible considering most airport prices.
DM: Yeah! So it’s kinda cool doing a trip to a place like this, it’s not a huge city like San Francisco with traffic and all the people, which makes it harder. And then when you go to small places it’s easy living: people are sitting down outside their houses, smiling and enjoying the day. It’s really nice to do trips to places like this.

And were there a lot of other tourists on the island?
OB: In Terceira no.
DM: In São Miguel we saw some, but not that many. I think it was because it was the offseason.
OB: Yeah it’s not the main season for tourists (September). It was crazy because we tried to go out in Terceira one of the last nights we were there and we went to like the most popular club there in the town. So we just came in, six of us, and we closed the door and everyone was looking at us like, ‘who is this?’

The music stops…
OB: Yeah we were the strangers. You could tell that they’re not really used to foreigners/tourists.

Most people visit the islands to see and walk around the landscape right?
DM: All the tourists you’re gonna find in the Azores are people who want to walk around in the nature.
OB: Yeah they want to explore the volcanoes and caves.
DM: It was funny because at the airport we saw all these tourists with boots and all the equipment for walking and then there was us: homeless-looking people with bags of stuff…

Skate shoes with holes in them…
DM: Yeah, the people were looking at us like, ‘what are these guys going to do here?’ 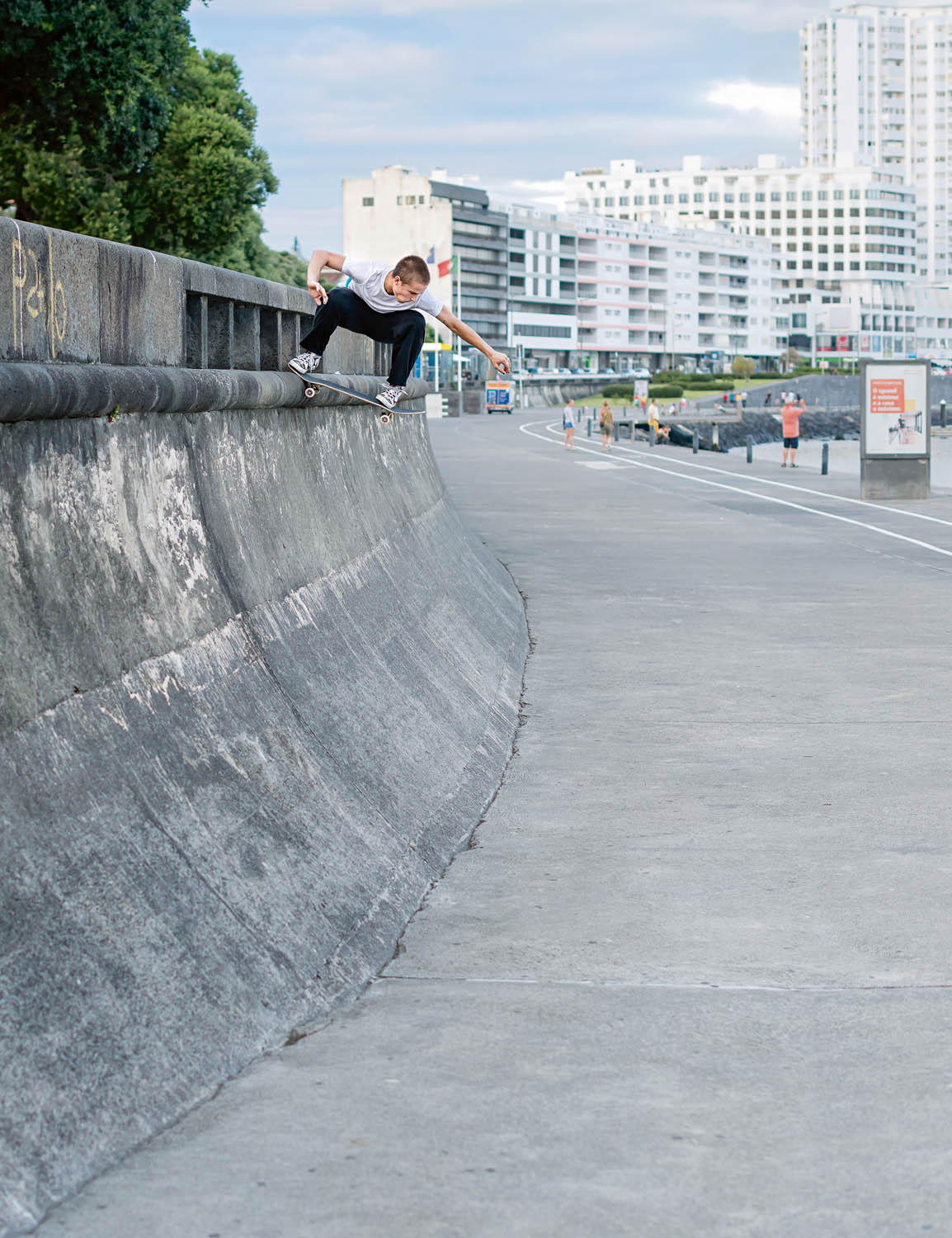 So were all the spots rugged? Or some smooth ones?
DM: There were all types. We skated plazas, like normal plazas in little neighbourhoods and then crazy spots like Felipe’s coast-to-coast grind.
OB: That was crazy! It was an entrance to a farm. It was an old stone wall and a fence between the wall and he just 50-50ed from one side to the other. It was a good mix of weird spots and some regular ones. Some of the spots had the Portuguese stone. It’s pretty Lisbon style.

Oh those annoying small white cobbles!
OB: Yeah! It’s crazy it’s there too in the Azores.
DM: Have you seen how they do it? They lay the stones in one by one…

It must take forever! Forever to make this shit ground…
DM: I don’t know why they do that. 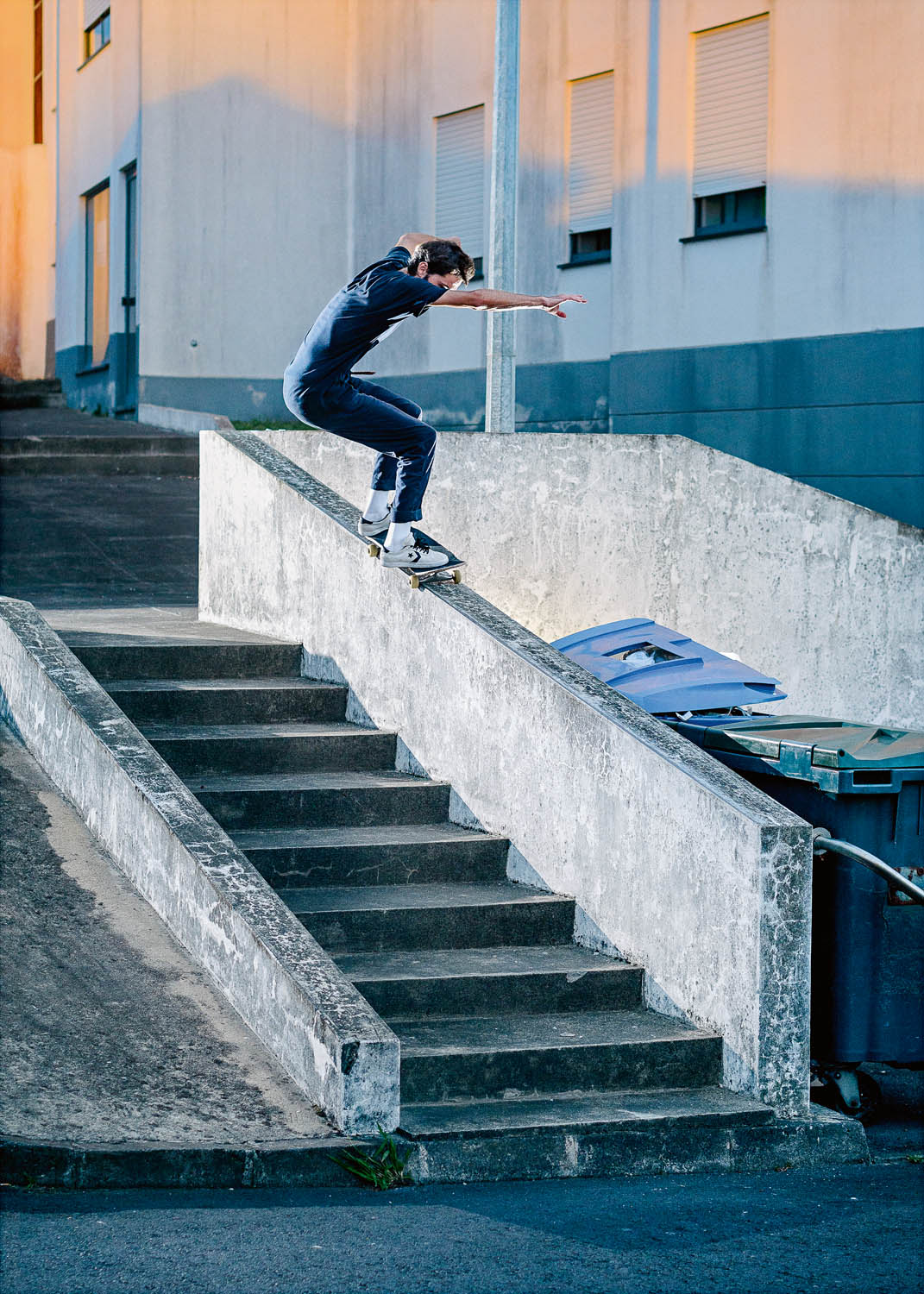 OK any last things you guys want to add?
OB: I think the only thing is to inform the next skaters who will visit the Azores that they have to be clean. Everything is clean and super green and there’s a lot of nature. And you can feel it, the people are super respectful of their natural landscape so it’s kind of weird when we get there on the plaza and drink beers and stuff. You can’t leave everything there on the floor, I think they’d be really mad at that.

Basically pick up after yourselves…
DM: I mean you have to do that everywhere, but especially in these serene natural places. You are surrounded by nature so you kind of feel extra pressure or responsibility to leave everything clean and respect the place where you are. That’s the main point we think deserves to be said. 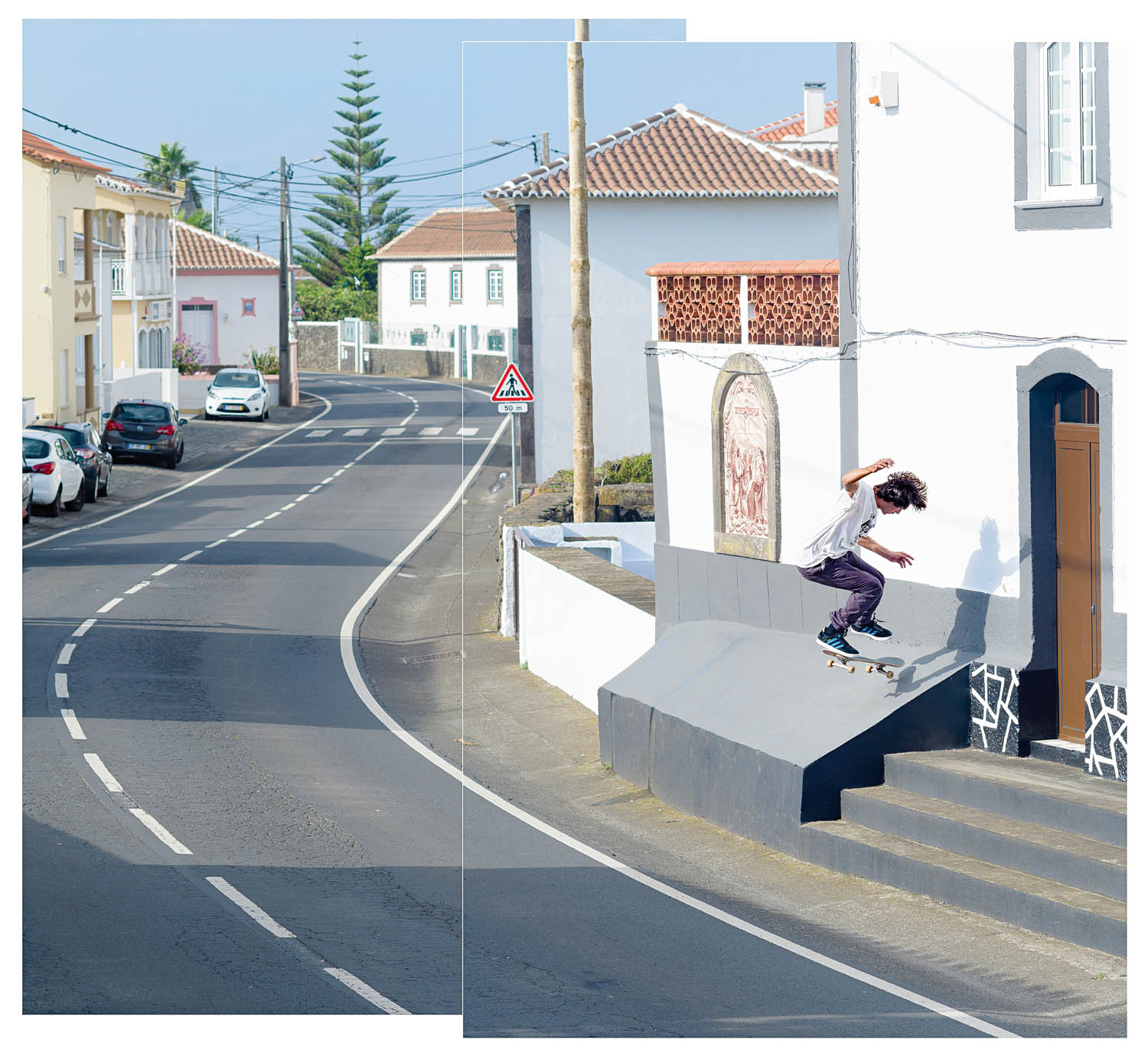