The Weight Of Clouds by Rick McCrank 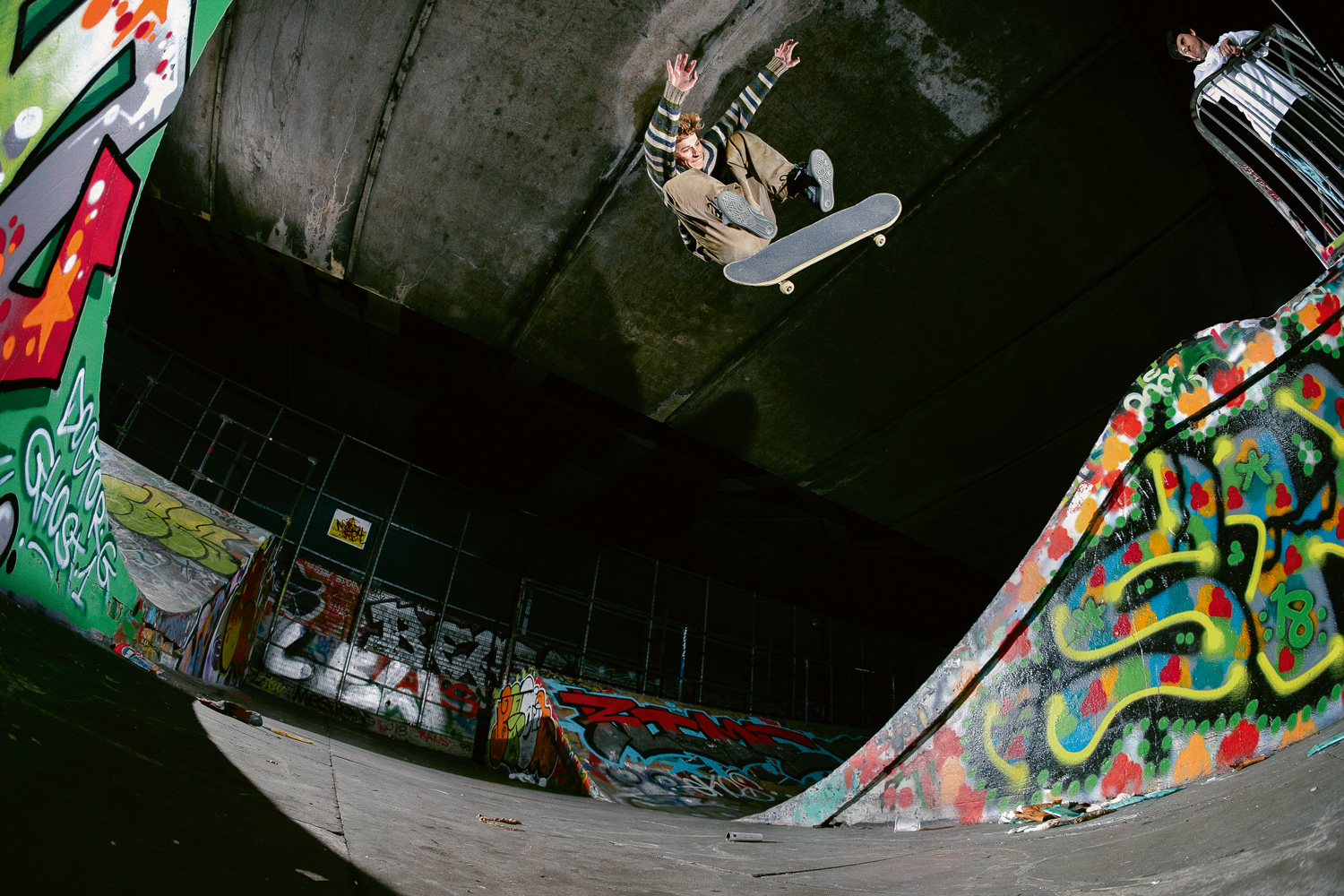 Recently I was imagining the air around me as a liquid, I imagined it was like I was under the sea. I watched the wind blow through the trees. I saw it as a water current with mass, pushing through its environment and I didn’t see the birds flying I saw them swimming like fish through the water.
As I was daydreaming I thought about the weight of water and how when diving, the deeper you go the more the pressure builds causing pain in one’s ears. Thinking of this I wondered: if someone is higher in the atmosphere does one feel less physical pressure? And then I started thinking about clouds and in particular the weight of clouds.
I live in Vancouver, Canada and for a large portion of the year it’s blanketed in clouds. I did some research and learned that the average cumulus cloud weighs 1.1 million pounds. I couldn’t help but think that that enormous weight above has to impact us somehow. I thought about the effect of the clouds’ weight on our bodies because all my original wondering brought me to think of the pressure one feels in their ears while diving deep underwater and technically being under the clouds is being under water.
At first I wondered if the weight of the clouds above us might possibly impact our mood because my mood tends to change during those times causing me to feel down or lethargic, but no research has proven that clouds affect moods. The affect to our mood during a cloudy day is mostly due to a lack of sunlight, which is a proven mood stimulant. 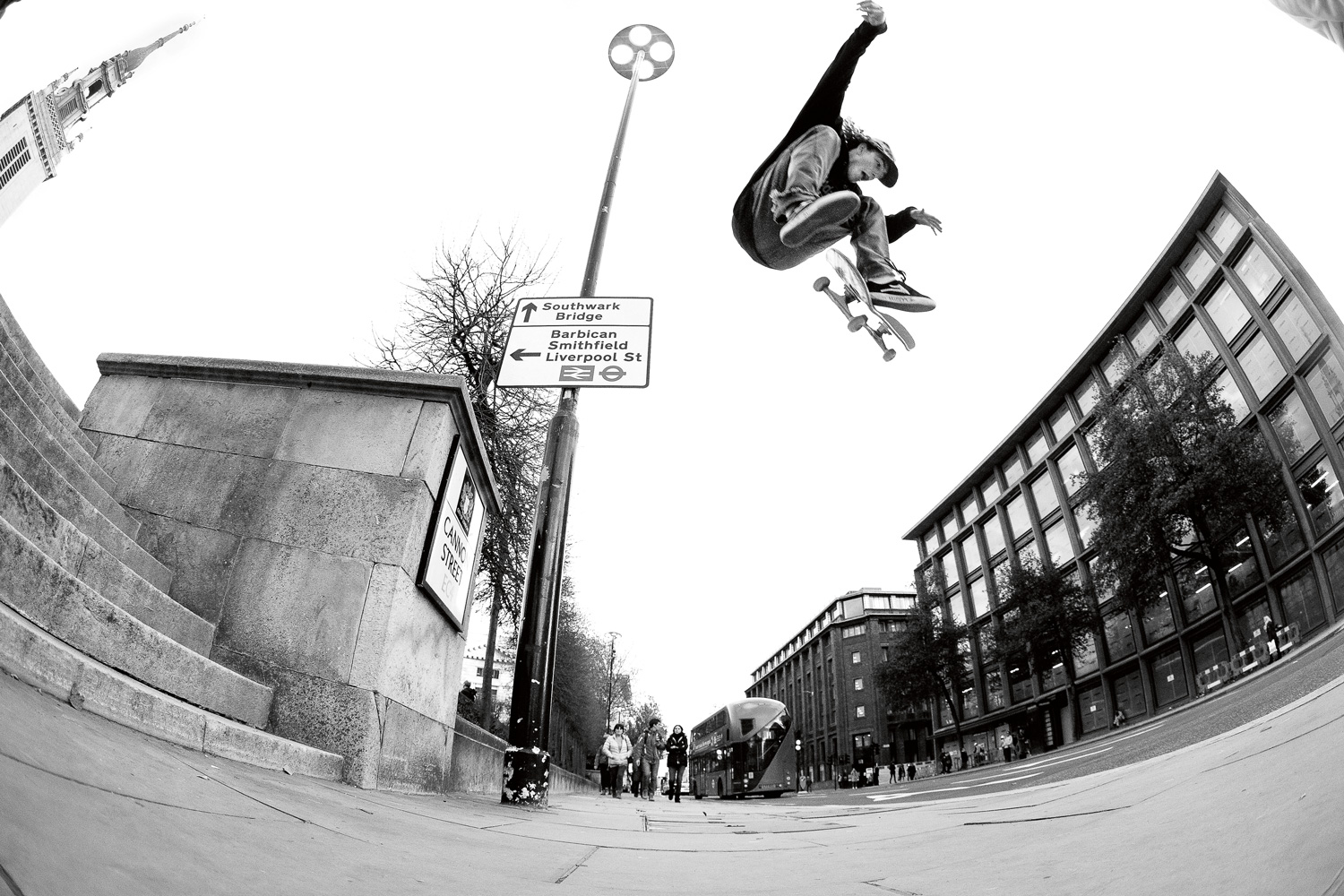 During my cloud weight research I learned about barometric pressure or the pressure of the air. I thought maybe the clouds’ weight adds pressure to the air by pushing down on it but I learned that when there are clouds the barometric pressure actually drops, this can cause aches and pains in people with arthritis and joint injuries, not unlike the pain one feels in their ears while diving deeply into the water but for the opposite reason. The pain comes from pressure easing around the body and it swells and expands. You may have heard of people feeling aches in their knees and saying something like ‘rain’s on its way’, this is the physical effect of barometric pressure on the body. I for one feel it in my right knee and ankle. In my knee I’ve had a good chunk of cartilage removed resulting in some mild arthritis and in my ankle I’ve had two surgeries and a life of ankle rolls: I have no problem predicting when it’s going to rain.
With clouds eventually there’s rain, which stops skateboarding from being even remotely safe (not that it ever really is) and when it’s damp and colder we feel more achey and stiff; it takes us much longer to feel warmed up and loose. Another thing the rain does is eat away at the ground we use to skateboard on, creating gaps between paver stones by wearing away at the grout and by year after year deteriorating and dissolving the cement we’ve poured, eventually causing rough pitted ground or what many Southern Californian skateboarders call ‘bad ground’. I imagine that people from these rainy areas such as London just call it ground because smooth ‘perfect’ ground is rare there. 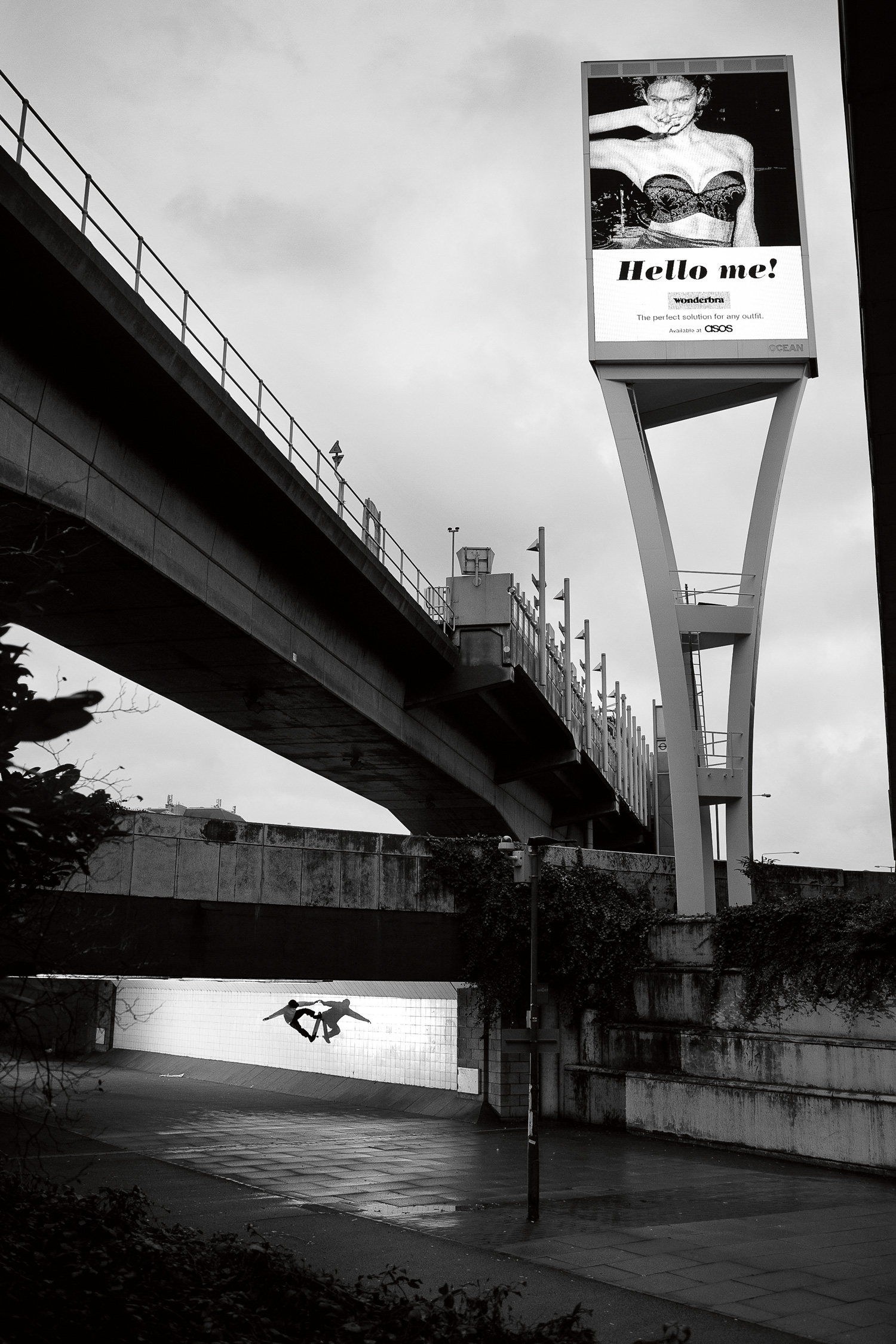 Now I’ve said I live in a place that rains a lot and we have our fair share of ‘bad ground’ but the difference between the city where I live and London is Vancouver is a 132-year-old city that has not had to endure centuries of relentless ground killing rain that London has. London is a 2000-year-old city and has a deeper knowledge of the clouds and the rain. Being a skater in London adds an extra layer of commitment that some other places just don’t have, the majority of the skate spots there are very challenging even for basic tricks due to rough broken ground. It takes a visit to London to really appreciate this and to appreciate the grit and talent of the local skaters even more than one already does.
I recognise I’m writing this in a British publication as an outsider of course, these are merely my observations as a North American visiting London on a week-long skateboarding trip in early December organised by the people at Kodak and Girl Skateboards to promote a new collaboration by way of doing a demo in the ‘Skate Bowl’ at the ever so posh Selfridges department store in central London. I’m joined by my fellow Girl Skateboards teammates Sean Malto, Simon Bannerot, Niels Bennett and Tyler Pacheco. We’re a close-knit family of skaters but on this trip I saw us as two groups: there was Sean and me and there was Simon, Niels and Tyler or who Sean and I called ‘the kids’.
While Sean and I are two independent people, the kids work as a single unit all with completely different personalities, mentalities and skills but combined they are one: seamless (skateboarding in a nutshell). As different as they were there was one thing that they all had in common, they didn’t use their phones. It’s been a long time since I’ve been around a group of people who just don’t give a shit about their phones.
This made me think… After pondering about clouds in the sky above I couldn’t help but think of another type of cloud, the virtual ‘cloud’ or the Internet in general. Both forms of clouds can affect mood, behaviour and skateboarding. Comparing the two clouds, there’s an honesty to the physical cloud, we can see it coming we can feel its pressure and we know when it’s gone. But the virtual cloud on the other hand is a tricky one, it’s invisible and almost always there, it sneaks up on you when you’re not paying attention. It tries to manipulate you and trick you (believe me as I’m writing this article I’ve been distracted and tricked several times). 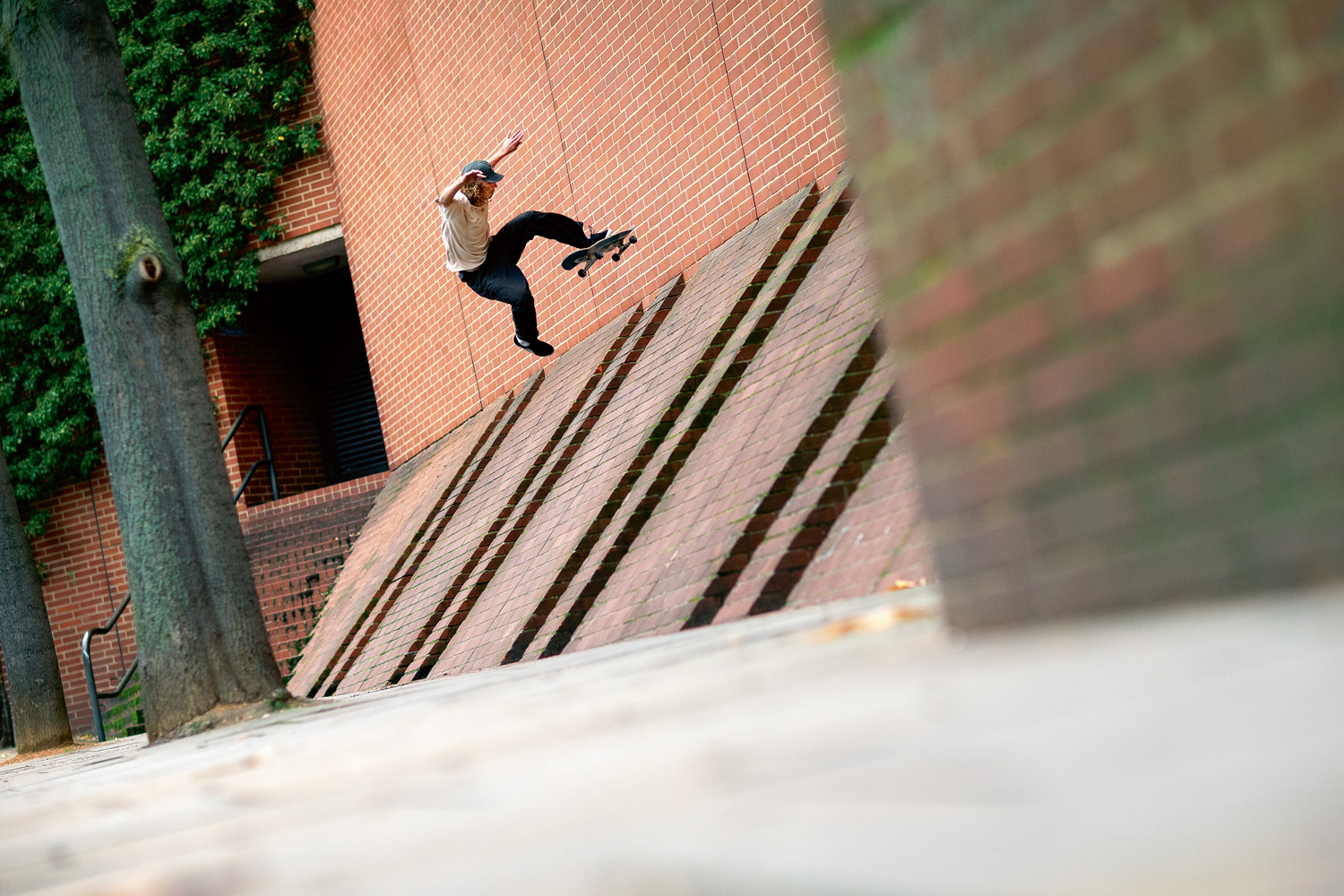 These days a typical skate trip can consist of long quiet moments with people looking into their palms, or if there is a conversation someone pushes their phone into the faces of the people talking to show them the latest skate trick or Internet fail, completely derailing the conversation. The other way they’ve infiltrated skate trips is how skaters constantly try to squeeze out some sort of Instagram post to please either their followers or their sponsors, I’ve done it many times. I thought it was part of the job, maybe it is? If it is part of the job ‘the kids’ really don’t care, they are completely in their environment. They feel no pressure from the virtual cloud; they don’t want likes, followers, instant gratification or false knowledge. We pretty much all feel this new pressure but not these kids; something happened down the line when they all just said ‘fuck it’. I don’t know if they felt the effects of disconnection or they just realised that they just have way more fun actually being together but somehow they broke out of the ‘cloud’ and believe me when I say this, they are free.
In their downtime away from actual skateboarding, if they weren’t talking about the spots they wanted to skate or local food traditions to sample such as fry ups or bangers and mash, they were either drawing or reading National Geographic magazines, never once wondering what anyone else was doing outside of their immediate vicinity.
The kids would always wander off without a care in the world. Malto and I were the older worried friends but they’d always figure it out. Malto commented that ‘we’re always concerned that they’ll get lost or jumped or whatever but it always works out for them. They’re fine.’
While we were on an overground train I looked up and I remembered when my plane was making its descent to land in London we were above the clouds. I was mesmerised by their beauty, lit from above with what seemed like castles and turrets jutting upwards. As we broke in to the clouds on our descent we began to feel some turbulence; I thought it wouldn’t last long, it should clear up when we get under the cloud. After a while of diving through this gigantic grey mass I was struck by how dense it was, it never seemed to end. Sitting in my pressure controlled cabin I made a mental note of how long it took and eventually we punched through the bottom of the cloud and could see London below. The cloud was low and very thick above the city, these weren’t the clouds that one lays on their back and sees animals shapes in, these were the dark looming grey clouds that cover the entire sky as far as the eye can see. Dictionary definition of the word dreary. 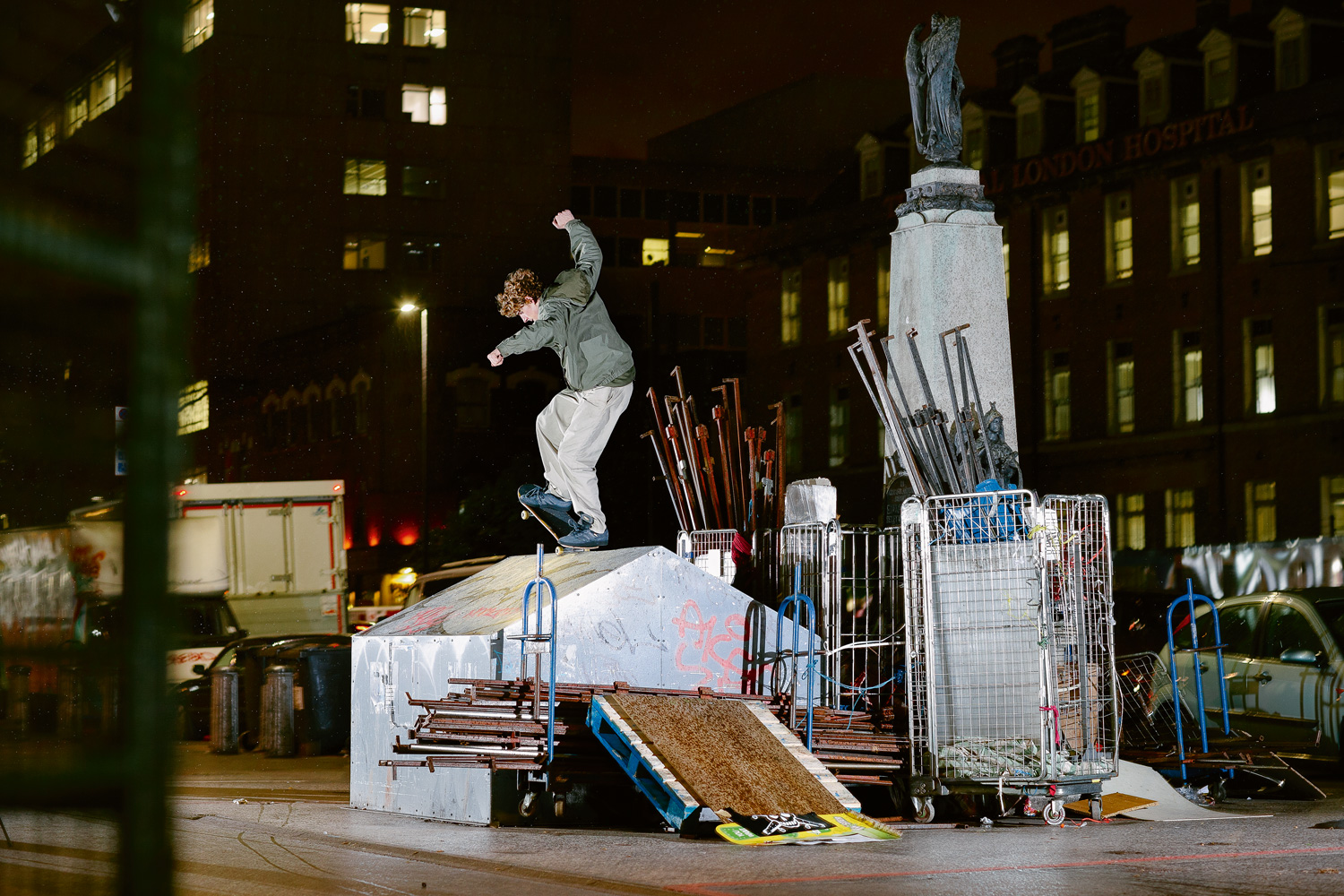 On the plane I couldn’t help but think that we wouldn’t be doing any skating outdoors while we were there. I pictured us skating the bowl and then the few indoor and covered places around town, which we did and a lot got done but to my surprise the weather cleared up for a few days… Malto and the kids wasted no time destroying spots they dreamed of skating. These guys don’t dream of skating perfect California picnic tables, they appreciate spots for their flavour and history (especially if Tom Penny skated them). Even on the rainy days it was easy to see that being in London during December was not a drag for these guys, it was a privilege and an honour and they weren’t going to waste a moment of it.
I couldn’t help but envy them, I’ve been travelling for over twenty years and sometimes I forget that.
On the day of our demo at the Selfridges Skate Bowl I had some strange feelings. Personally I don’t spend any time in department stores or malls really. I tend to do my minimal shopping at smaller local businesses, so I felt out of my element. Entering Selfridges I couldn’t help but feel out of place as we walked through the vast illusion of opulence that these places project. I started to feel old learned feelings of shame and unworthiness that growing up in poverty embeds in one’s psyche.
Once we reached the ‘Skate Bowl’ though, these feelings disappeared and I remembered who I was and not who I ‘should’ be. As we got to the corner of the store where the bowl is I could see the familiar shapes of curved wood and steel and I started to hear the sounds of community; I heard some hollering and clanging and words of encouragement from strangers trying to help each other succeed at having fun skateboarding, together as a group – a group from all sides of the economic playing field. People from rough parts of town people from posh parts of town, etc.
Inside the wooden bowl that hovered two storeys over a corner of Oxford Street I couldn’t help but think of the bowl as one of those clouds sitting in the sky above and I realised that while I was in this cloud I couldn’t feel the pressure. I was away from the pressures of life and the illusions of monetary wealth and social status. I was away from the pressures of the virtual ‘cloud’ and it’s endless desire for my attention; up there I could see further and from all angles giving me a feeling of knowing where I was and of being grounded even though I was in the sky. As I watched Simon take a run, my mind didn’t wander, I didn’t picture him swimming through the air; he was flying.