Catching up with Louie Lopez 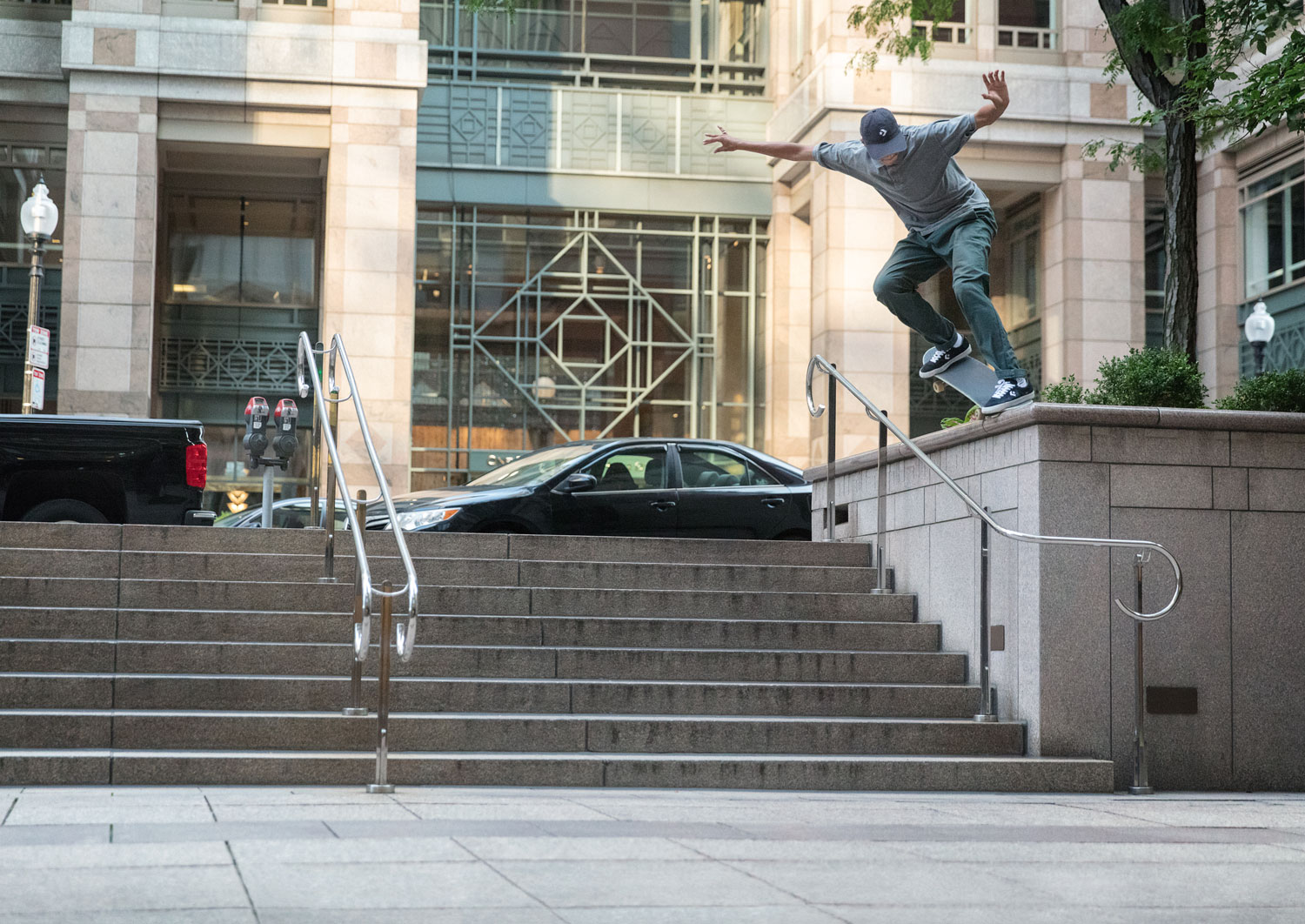 You might be familiar with the names Chuck Taylor, Dr J and Jack Purcell, but now you can add the name Louie Lopez to the list of individuals that have signature shoes on Converse. Being the latest member of this esteemed club Louie was in Paris this last week to talk about his new shoe, hang with his Cons teammates, fans and marvel at the snow-covered  streets. Luckily he had time to link up for a quick chat.

All photography by Jon Coulthard
Interview by Will Harmon

Do you remember your first pair of skate shoes?
Louie Lopez: My first pair of skate shoes were just some Vans; I can’t remember the model, but they were brown. I used to be crazy when I was younger; when I’d get a new board and new shoes I would sleep with them. Because one time my dad ran board over so I was like, ‘this is not gonna happen again!’ But I remember I had these Vans, and I was trying to keep ‘em fresh, but then I fell in some grass and there was a grass stain all over them. I was so bummed! That was like the first skate shoe I had. Actually I should probably say some Chuck Taylors, ha ha…

In other interviews you’ve talked about having a great relationship with your dad and how supportive he was. Growing up and seeing other younger skaters’ parents at events pressuring them did you ever feel like, ‘damn, I’m glad my dad’s not like that!’?
Of course! And it’s funny because my mom has been giving me crap because ‘every time you do these interview you always talk about your dad’ so now I’ve gotta be like ‘my mom and my dad’.

I have a question about your mom later don’t worry!
Nah she’s just joking but she always just gives me shit… But yeah they are just super supportive and obviously there are those parents that are gnarly and you can see how it bums kids out and I’m just thankful that they (Louie’s parents) have been there for me since day one and backing me in whatever I wanted to do. That’s helped out a lot for sure.

Do you think some of the kids with the real pressuring parents grow up to resent skating in a way?
I think they definitely get confused. After told being what to do so much when you’re on your own having fun you can get confused. A lot of kids have that little dark space where they’re finally on their own and figuring stuff out and they realise like, ‘damn this is actually really cool!’ instead of having a lot of pressure on them all the time to nail a trick or something.

So when you started skateboarding did you know skaters had pro shoes?
I didn’t know that right away. But as I got more and more into skating and I got a couple more pairs of shoes you notice that people got their name on them and like, ‘one day that would be amazing!’

Well that day is here Louie! So when it came to your shoe, how involved were you in the design?
I designed the whole thing and we just went into the archives at Converse, they have this big, massive room where it’s like all the old shoes. So we got to the point where we realised that the old tennis shoes were what we liked and we picked one that we were really stoked on. The shoes that I like to skate are the One Star CC and the Break Point, so it’s a little mix of them and other things and basically we go this (Louie picks up his Pro Shoe from the table display).

I used to live in Boston (where the Converse US offices are located) so I was really hyped on your backside nosegrind photo there at Downhill Marble. I thought that spot had been knobbed for time and a bust so it was sick to see you hit it in a different way…
Luckily when we were there we got quite awhile. We didn’t really get the boot. We were there long enough to where I decided to skate that thing and Dane (Barker) skated it with me. But the knobs you mentioned, they are really sharp, and as soon as I landed I put my hand on the ledge and sliced my hand. It felt like you were putting a knife through steak, it was literally so sharp and I could feel the texture. As soon as I did it I was scared my hand was gonna be cut really bad, but it ended up not being as deep as I thought. 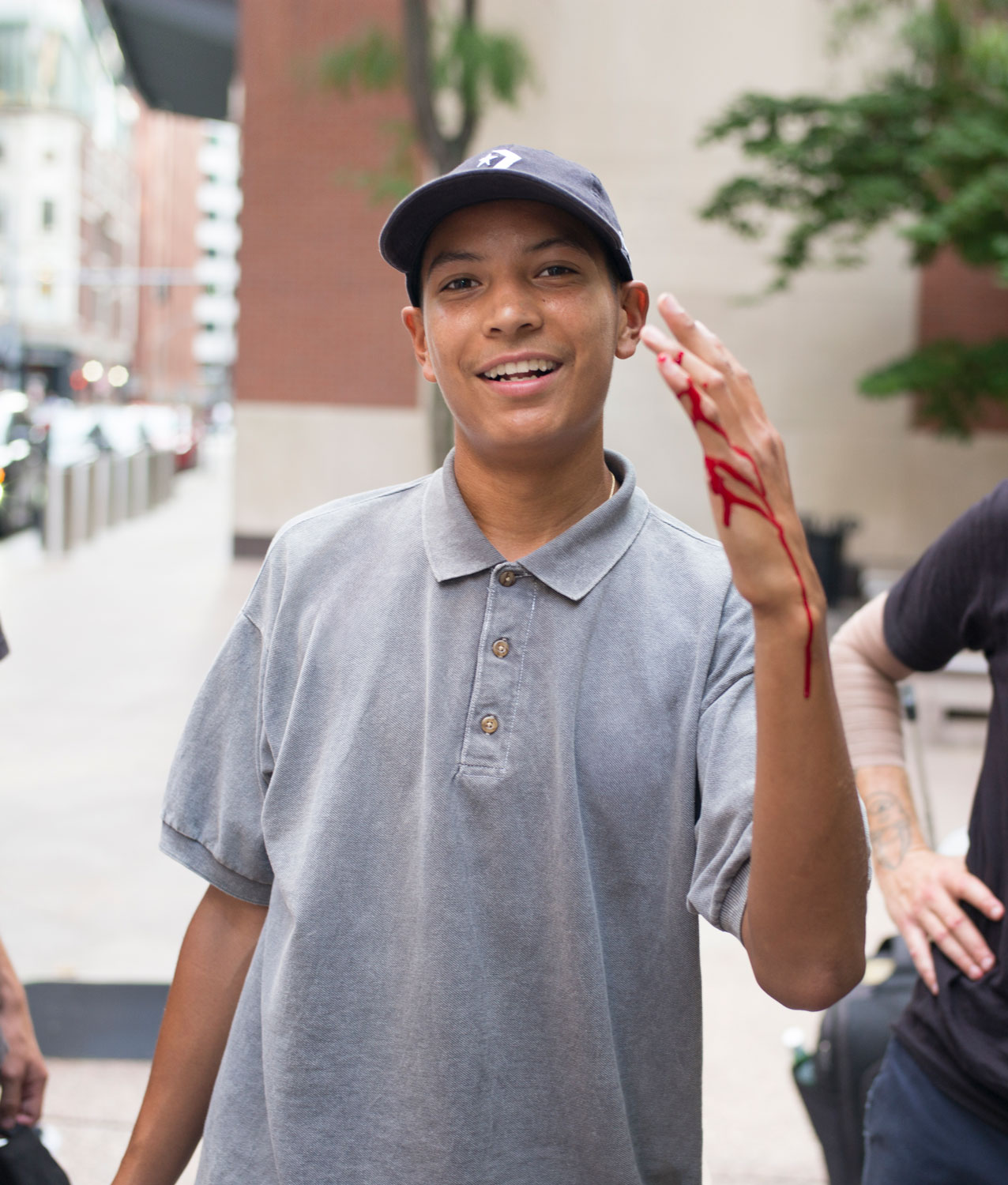 Glad it wasn’t too bad. Ok, so after your shoe release in LA a couple weeks ago I know you went straight to Brazil for Street League, and now you’ve flown all the way here to Paris for this little get together: you’re travelling loads! Is there a favourite place you’ve been to in all your trips?
It’s always hard to pinpoint a certain place, but I enjoy the beach and warm weather so basically anywhere that there’s a nice beach and some good weather I’m into.

So not Paris right now (it was snowing), ha ha.
It’s cool to switch it up though; it’s hard to pick one place because everywhere has so much to offer. It so nice to see Paris in the snow… I’ve never been here when it’s snowing. I just woke up and it was snowing, that was pretty sick.

In another interview you said that your mom arranged to have dinner with an Amish family near Woodward in Pennsylvania. Did you parents always take you on these little educational side trips when you went on skate travels?
So when I was younger either my mom or my dad would go on trips with me until I was 18, because you know you had to have a guardian or whatever. Every time my mom was on a trip, my mom’s a teacher, so she would always like make us go see a museum or like when we were in Amsterdam we went to go see the Anne Frank house so I’m really thankful of that. She definitely had to drag me some places like, ‘really? Seriously we got to go?’, but now I’m thankful she did that because that stuff you gotta see for sure.

Alright. So what do you watch to get hyped to skate?
When I was younger I’d always watch stuff, but nowadays I’m pretty much out the door going to skate. But if were to just pop something on now it would probably either be… I mean Jake Johnson is one of my favourites, Grant Taylor… Probably something along those lines. 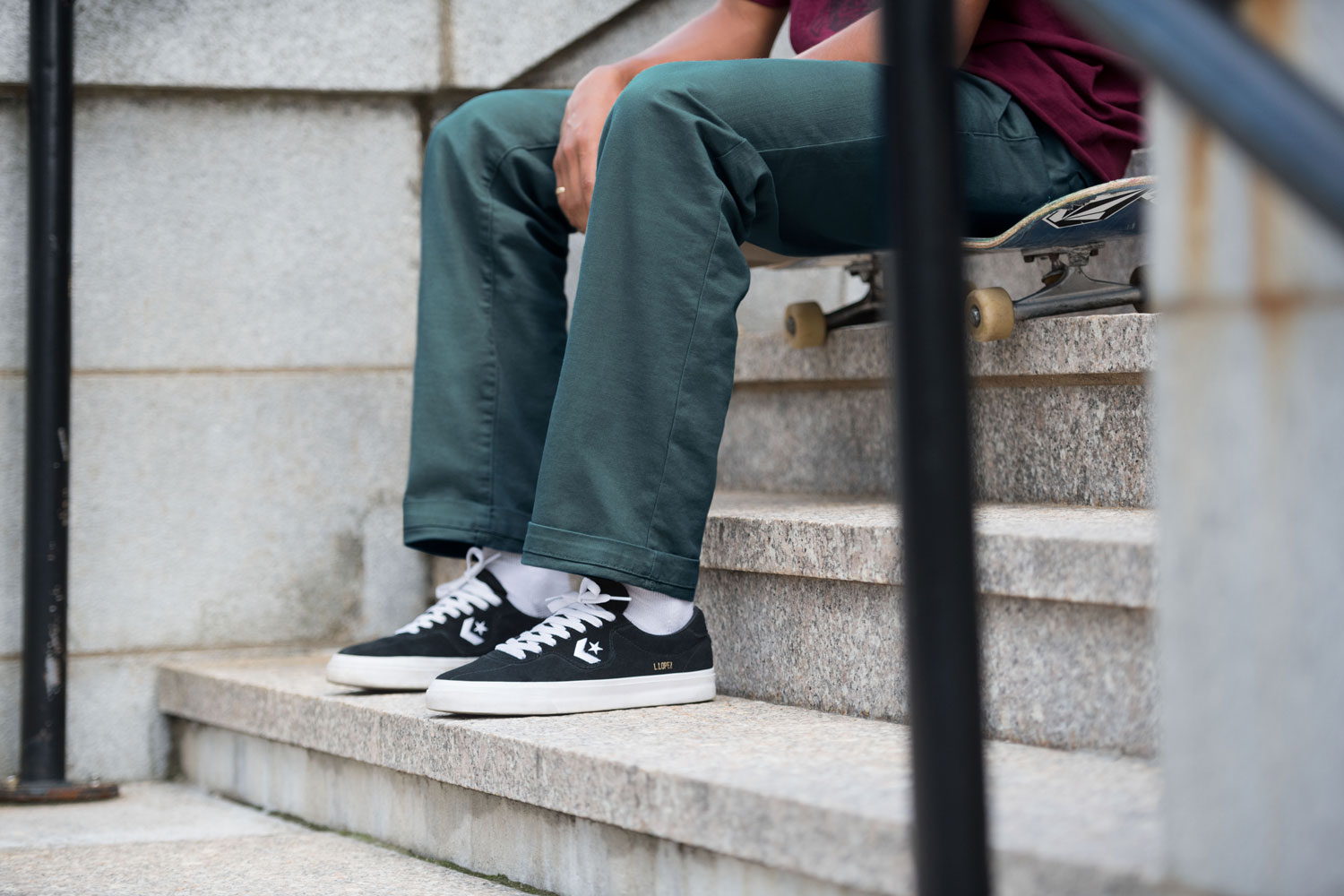 Can you remember the last online video you watched more than once?
I know exactly, Purple, ha ha.

Good answer, ha ha!
Aside from that I mean there’s a lot. The 917 video was real cool, basically what gets me stoked is to see people having fun out there and it’s just like skating with your homies and that’s what I really like about videos if you can feel the vibe.

I know you’re off to Gran Canaria tomorrow, but what are your plans for this year? What’s next for Louie Lopez?
I guess for the rest of the year just try to get on the road, film and be productive. 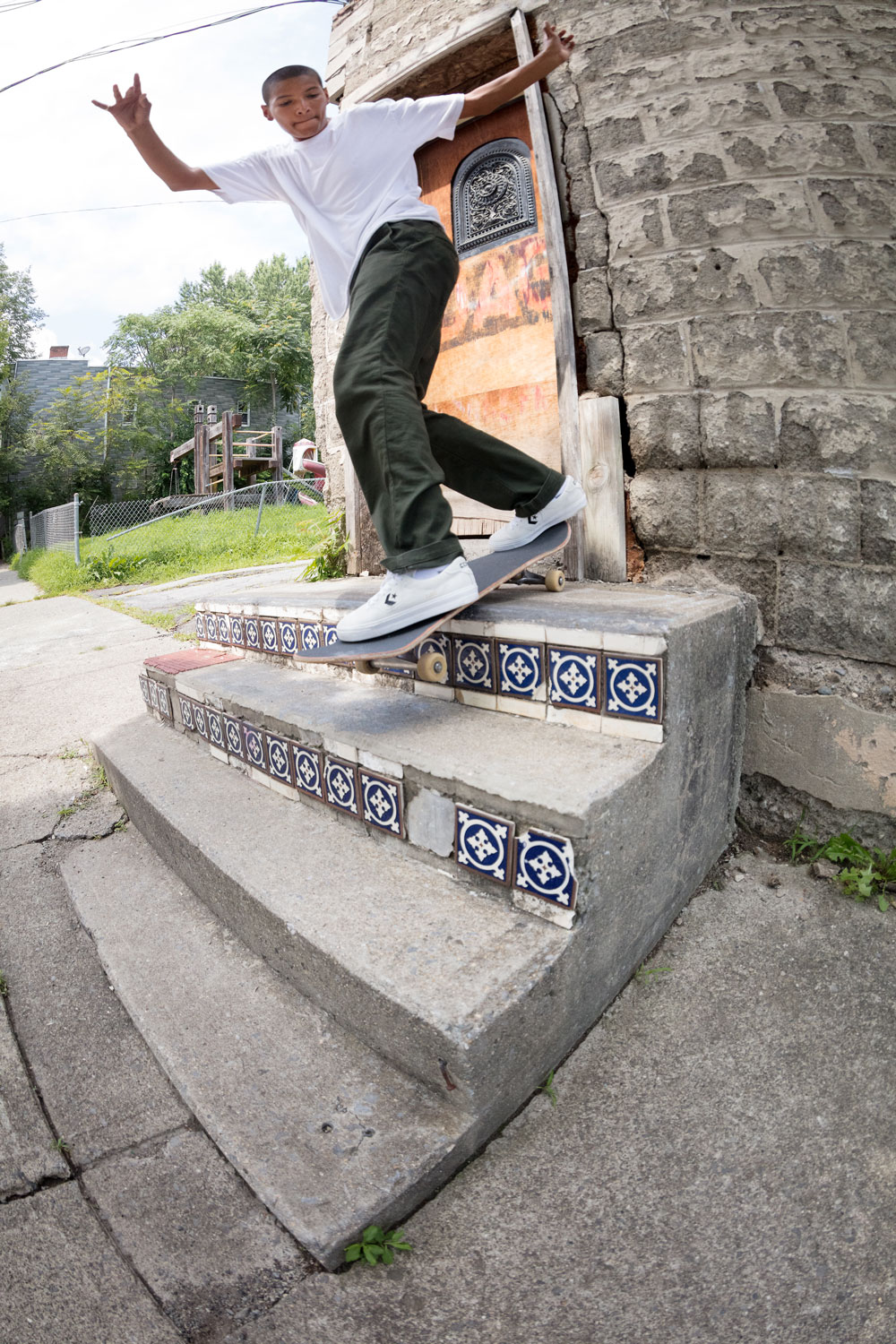