Wake me up before you Momo

We drank the Khukri Rum, the Everest beer and the millet Raksi. We indulged in the local cuisine – smashed the momos and infinite refills of dal bhat. We dove head first into Nepali crust shouting ‘ONE-TEN!’ at the top of our lungs, navigating the vast wonder of the Nepali landscape in an on-road vessel, 12 people deep. Did I mention Helena got smoked in the face? The good times rolled in in abundance, but this, quite frankly, is beside the point. 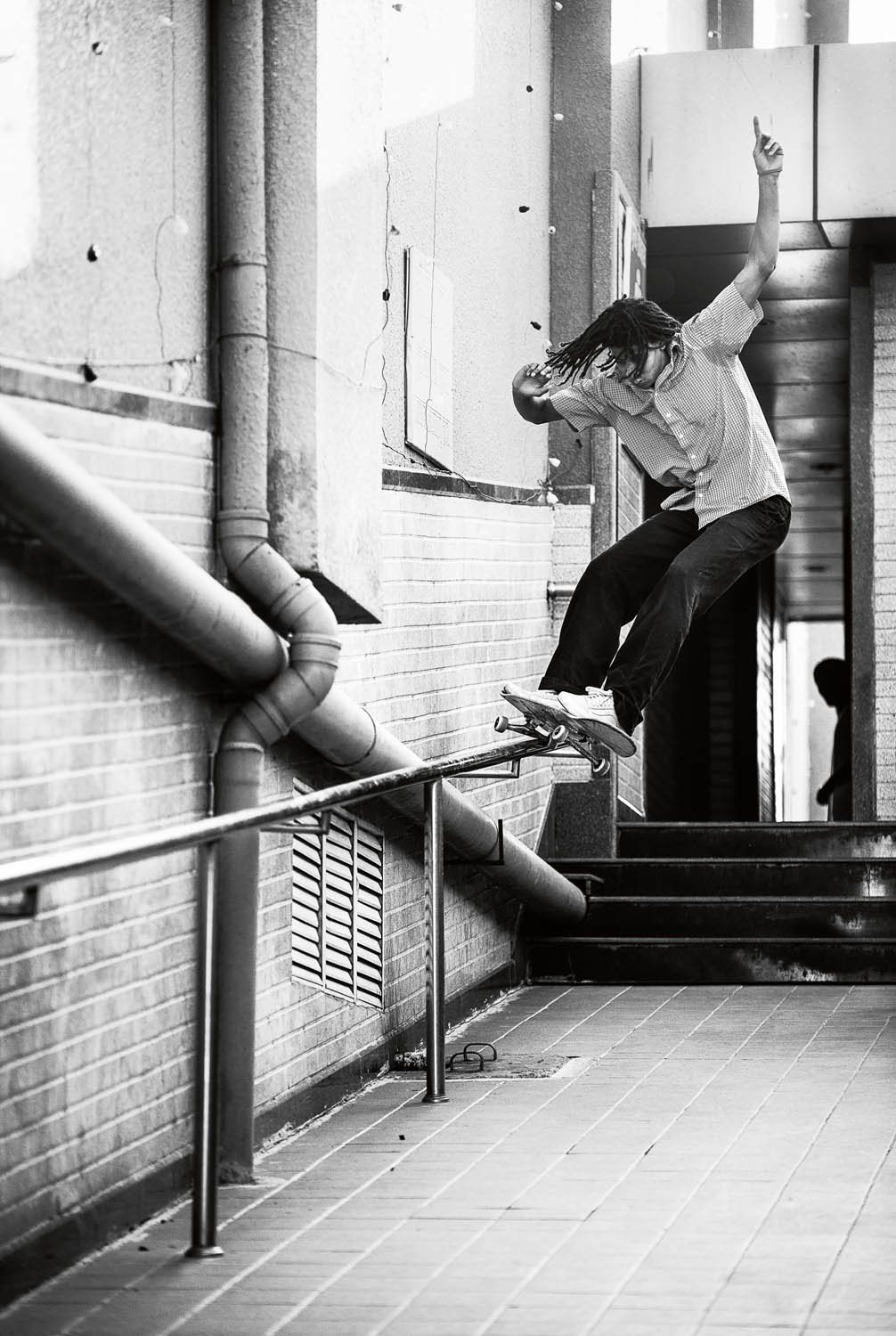 We, as skateboarders, are interconnected. Whether we are intellectually conscious of this or not, we all grasp and share an intrinsic value for this wooden toy. It quite literally shapes our lives. Skateboarding is an all encompassing, unifying family – regardless of age, sex, gender or background. SkatePal, Skateistan, Indigo Youth Movement and Make Life Skate Life to name but a few, are physical manifestations aiming to instrumentally share this unifying love for skateboarding to enrich lives – from everywhere around the face of this mysterious, crazy planet, from Morocco to Myanmar and Nepal to Palestine. Through that basic compassion our circle can only get bigger. How sick is that? 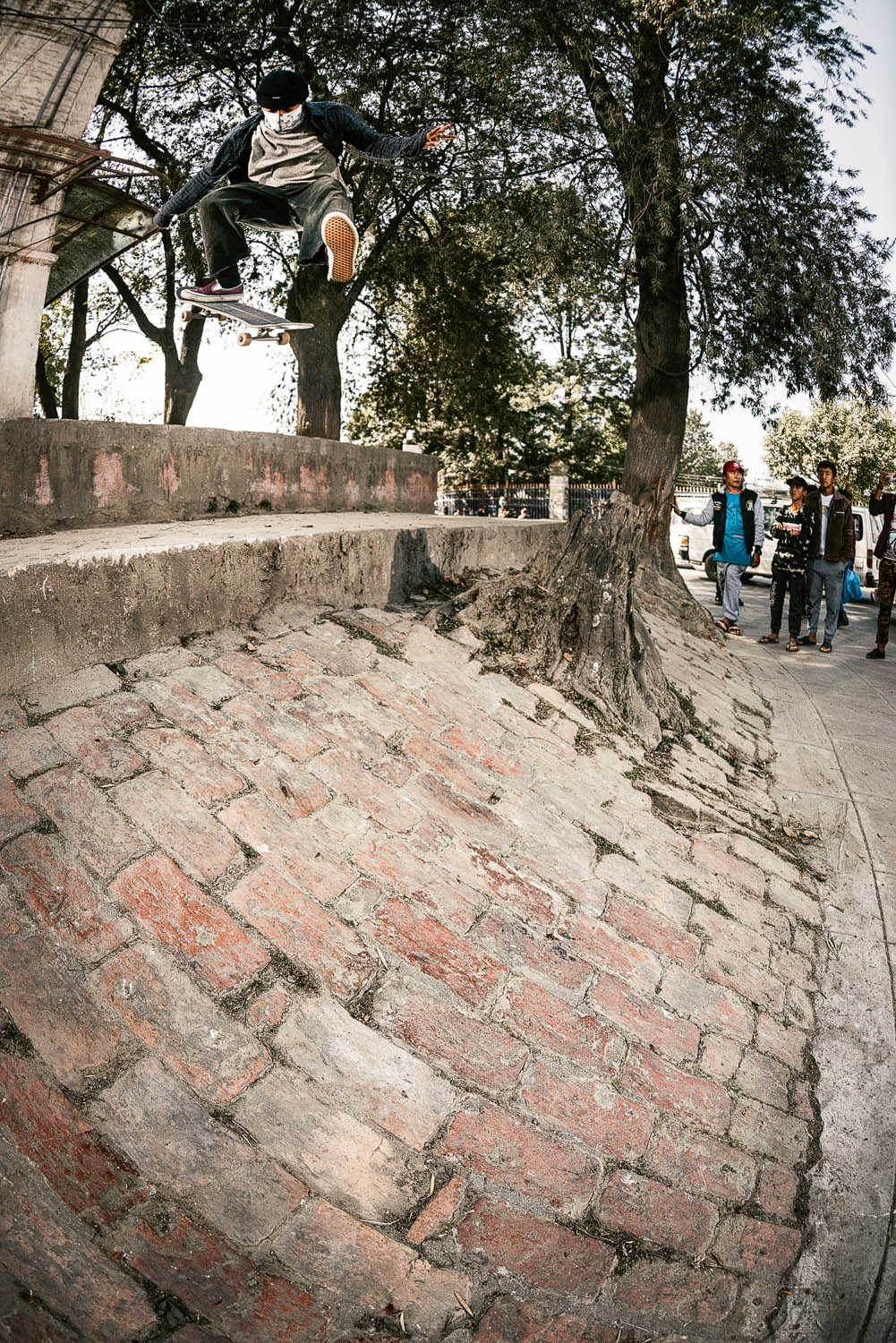 What we wanted to do in Nepal and how this incredible journey of a trip came together is nothing more than an extension of this ever-growing collective consciousness. To truly understand one’s blessings and then to pass those blessings on is a karmic way of life. Our compassion to do some good for our fellow man is what brought us all together. Our little ‘One-ten’ family (Editor’s note: One-ten is short for 110%) came into inception following a few fleeting conversations between Stu Smith and I. From there, the circle blossomed and infused the Lovenskate/Skate Nepal family tree, with Vans laying strong support at the roots. Our tree flourished thanks to its branches of support from Carhartt WIP and a whole host of UK distributors and generous human beings. It’s every single one of us uniting that ignited this fire of good will, each of us components of the macrocosm, contributing in our own way to the vast expanse of the skate community and beyond. Everyone from the people at House of Momo, to everyone that bought T-shirts, donated funds and old gear and everyone that spread the word and showed us love. Big up yourselves. It was always a family affair. Let this be known. 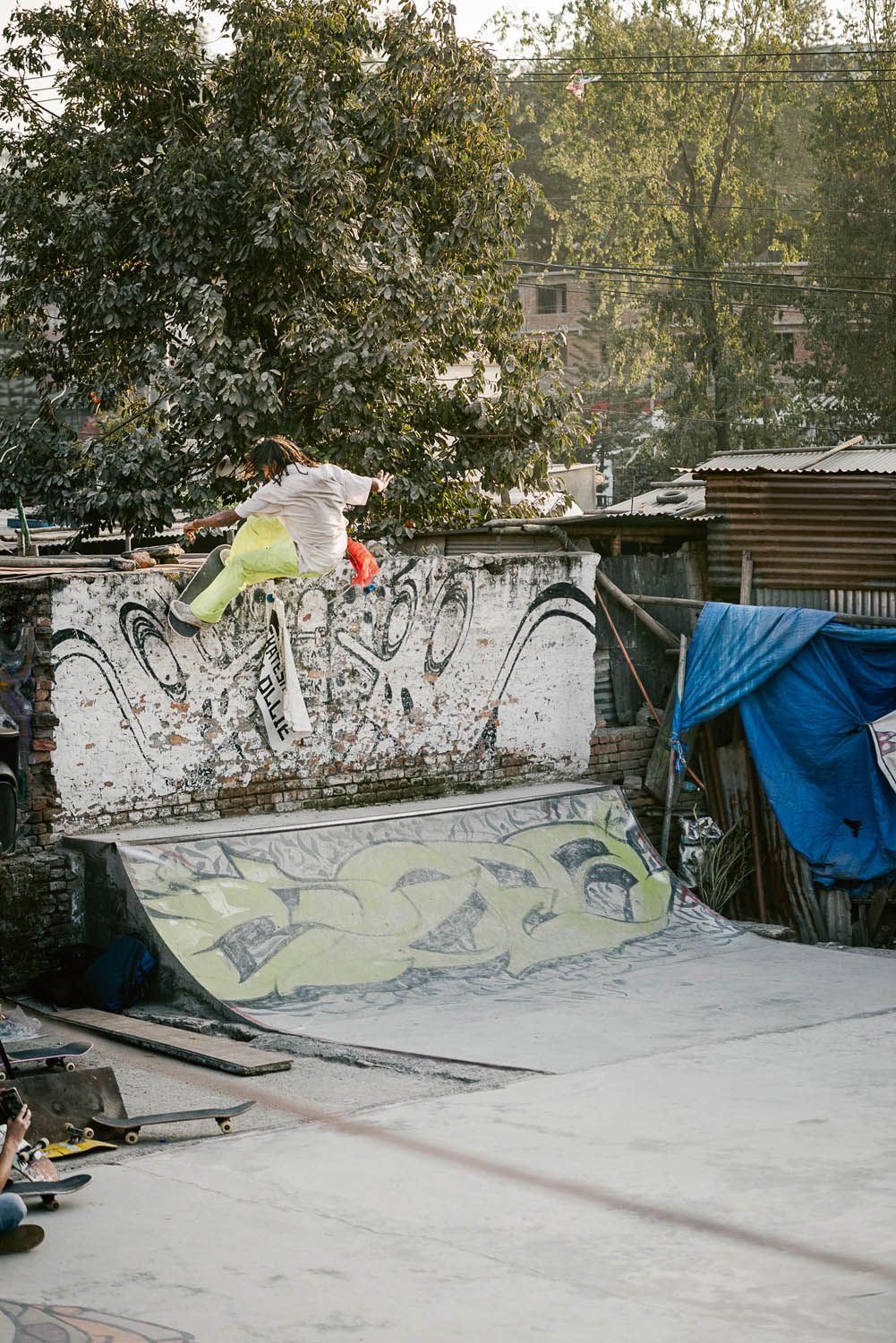 The premise of the trip was simple: see how far we could spread that circle of skateboarding across Nepal. To simply spread the stoke of skateboarding nationwide, to run some events at the newly built skateparks in Kathmandu and Pokhara (built by Make Life Skate Life) and get the skaters together. To unite the community, bring some tunes, bring some hype, ignite the session, nourish some seeds and plant some new ones. In no order whatsoever, along for the ride were Tom Delion, Samu Karvonen, Lucy Adams, Aaron (O’leary) Wilmot, Alex Hallford, Jordan Thackeray, Stu Smith, Helena Long and myself with Rich West shooting photos and Sirus F Gahan wielding a video camera with utmost precision and mastery. We also had Nepali stealth assassin Milan Shah Thakuri acting as translator/guide/legend throughout our journey. Instead of boring you with details, I’d rather let the Nepali skaters give you an idea of how skateboarding shaped their lives in their respective social, cultural and political context. 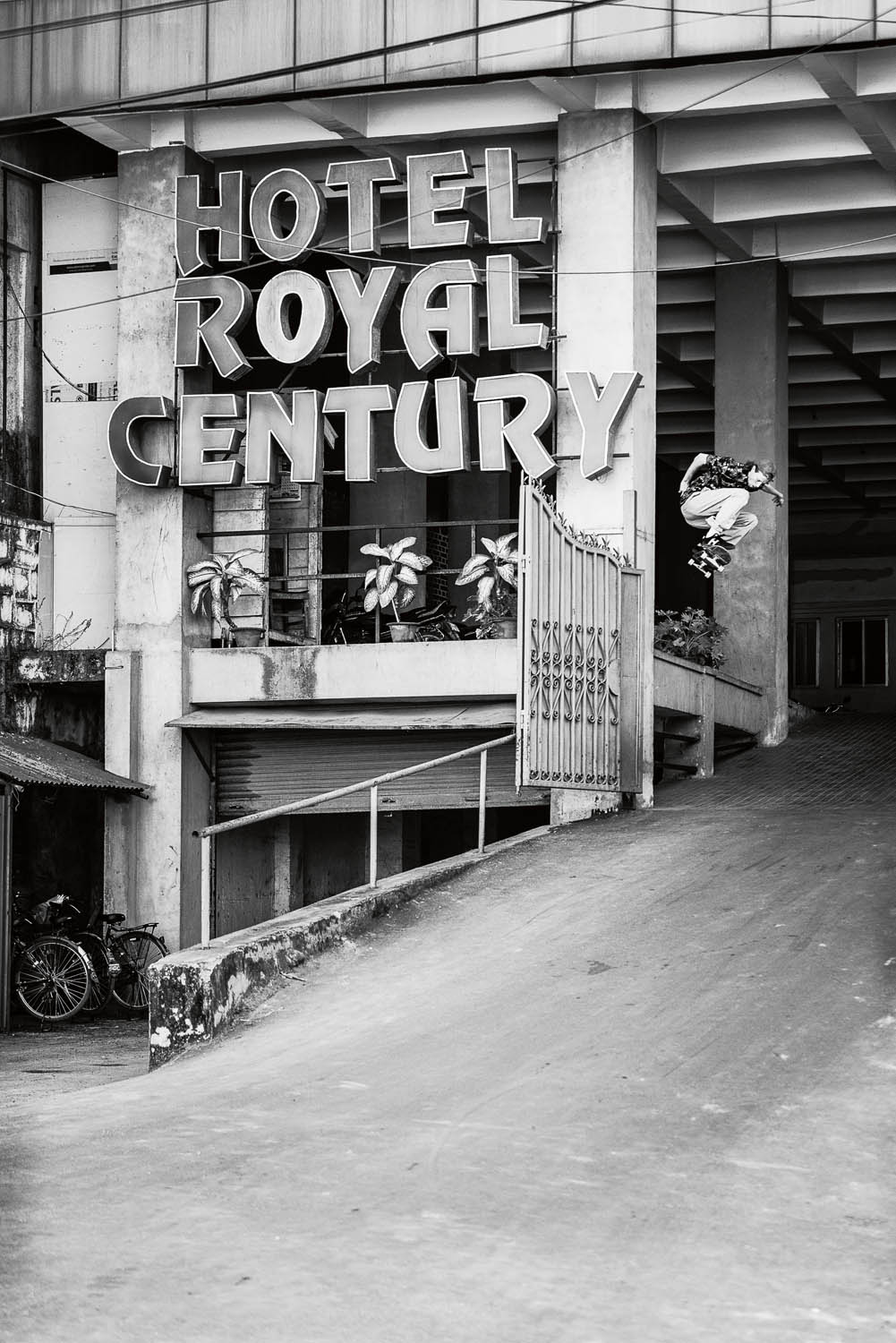 Perhaps, with a little shift in perspective, these testimonials will realign your perceptions of skateboarding and perhaps ground them in an elevated state of gratitude and appreciation. They may bring you closer to grasping that powerful, ineffable beauty that skateboarding seems to have embedded in us: that visceral feeling in our heart and guts when anybody asks us why we ride a skateboard. The answer always seems to be right at the tip of the tongue, yet no words can ever truly do it justice… Perhaps skateboarding’s true beauty is infinite and we’ll spend a lifetime unveiling and articulating its many layers. Or maybe I’m just over-romanticising it. Is anyone with me? 110, let’s go.

Skateboarding connects people. I’ve been skateboarding for one year and the skatepark here in Kathmandu has allowed me to make friends and learn from people from all over the world. All my friends revolve around the skatepark. It’s where I feel at home. The role of women in Nepali society is still very domesticated. We are expected to cook and to clean, I want to cut that tradition. Skateboarding liberates me and allows me to do that. It gives me hope that there is more to life than that. I have met skateboarders from all over the world thanks to the skatepark – so many inspirational people. Candy Jacobs and Helena (Long) have inspired and taught me so much. Helena taught me to ‘never give up’, and keep on trying no matter how many times you fall. She was battered and bruised, had stitches in her head and ripped her hand open, but was still skating, as hard as she could. She was still there teaching us tricks and encouraging us to participate in the best trick jams. That was so inspiring for me. Skateboarding is quite a male-dominated sport in Nepal, I don’t mean this in a bad way, but there are way more boys that skate than girls. In Nepali culture it’s not normal for girls to be so physically active, it is even slightly looked down upon. Because of this I feel quite intimidated, like I’m doing something wrong. Helena’s encouragement to get involved showed me that we aren’t separate. We can all skate together. She helped me feel less segregated, more confident and more motivated. Without the skatepark here in Kathmandu, I wouldn’t have started skating. It is my community. I wouldn’t have the friends I have and it would be hard to imagine life being any different. 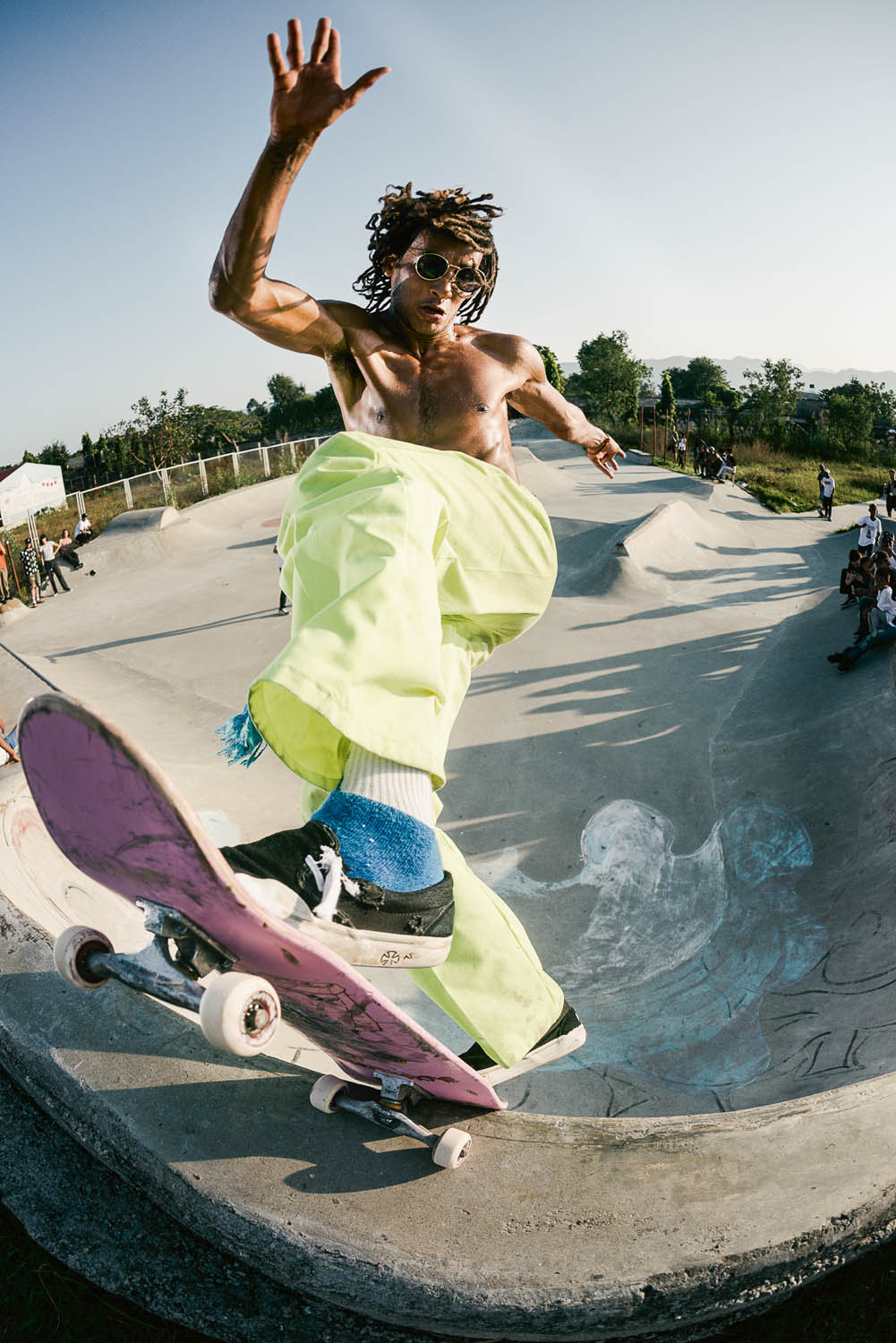 Skateboarding helped me deal with pain: to understand pain, deal with pain and even accept pain. In life, you will always encounter pain and struggle. We can never truly stop it; it’s part of life. We can only change our approach to it. Skateboarding helped me do that. As skateboarders we put ourselves through pain, but for a higher purpose. Not many people understand this; it’s kind of crazy, actually, for normal people. Going through pain is inevitable with skateboarding, but coming through the other side victorious is an incredible feeling. Pain in other areas of your life doesn’t need to be any different. You always come through the other side. Skateboarding helped me see the purpose in pain. It helped me accept pain as inevitable and taught me how to deal with it. Pain is actually essential; it is how we grow as people.
I’ve been skating for five and a half years, before Nepal had any skateparks or skate spots. Before it came into my life I was lost: getting drunk all the time, doing drugs, getting into negative friend groups. Skateboarding gave me direction. I had this idea that the only way out of that struggle was to find a job, eventually earn enough to help my family, perhaps get married then have children and start a family. When I found skateboarding, my whole life changed. The way I saw everything changed. I got introduced to this community and have seen it grow. I met people like Ram (C Koirala), Jordan (Thackeray) and Daryl (Dominguez) among many others – a lot of people that influenced me in really positive ways. I was fortunate enough to get sponsored (the first sponsored skateboarder in Nepal) and travel to India and Thailand – to experience competing and travelling and just being a skate rat. The opportunities that skateboarding gave me have really helped me grow. Now my entire life is skateboarding. I went from the person that I was to the person that I am now: from having a narrow view of life to having purpose. I cannot even express how grateful I am. Skateboarding has shaped me and from my experiences it can do the same for many others. I want to help create these opportunities here in Nepal, because if I don’t, then who will? 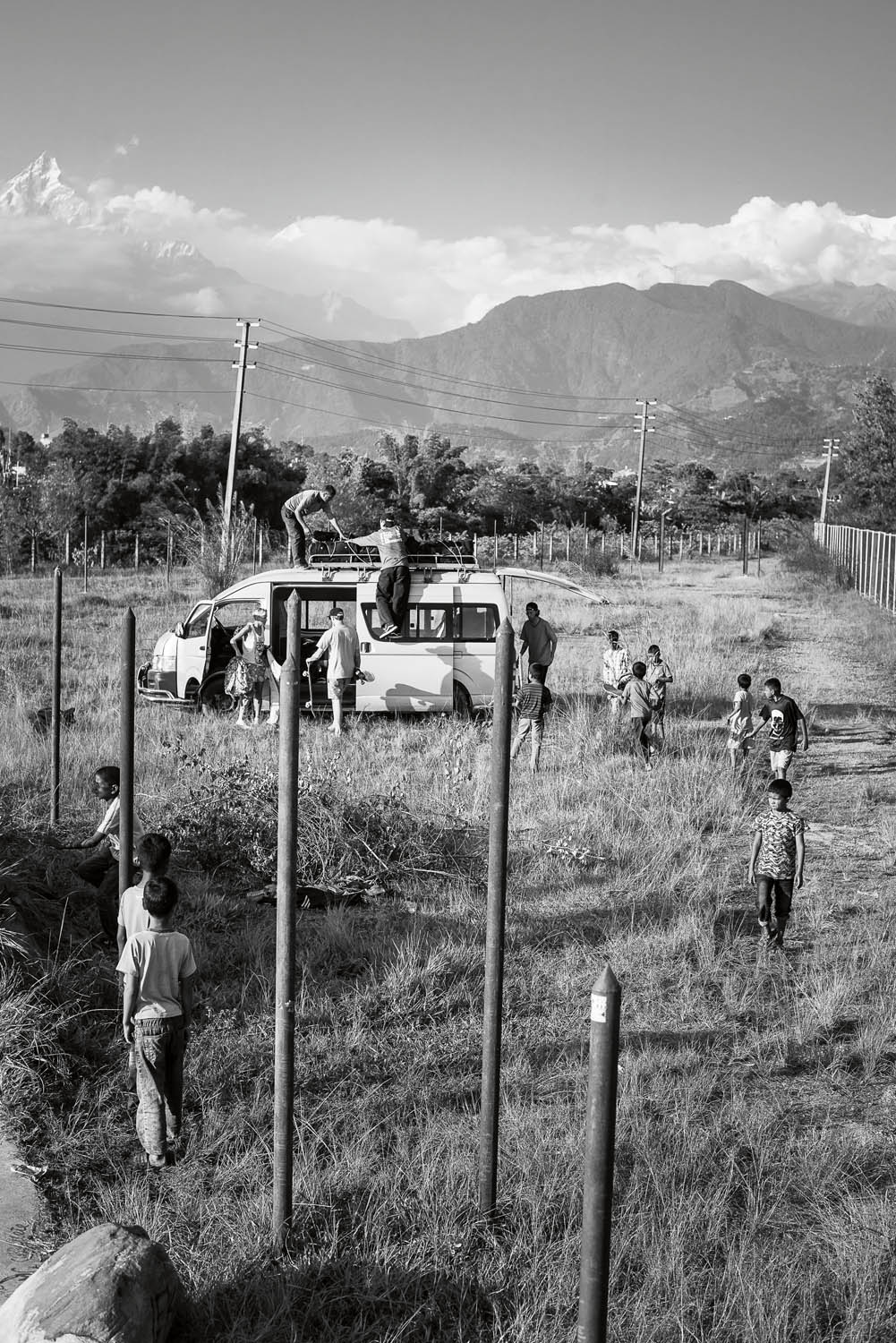 I got into skateboarding in 1994 when I was 11 years old. A western traveller gave me his skateboard as a gift before he left. Back then there wern’t any skateparks and hardly any smooth roads, no facilities at all. There were just a few roads in my hometown that I could skate. There were no other skateboarders; I was the only skateboarder in Nepal for a very long time. Skateboarding for me, especially when I started, was quite a lonely experience. I understand that skateboarding is such a powerful social activity, that connects and brings people together, but for me it was very personal. I would skate alone after school and just cruise and try and learn things. It was something I could enjoy on my own. I didn’t need a team like football or basketball; I could be independent and free. I didn’t have a skate community or anyone that I could relate to about skateboarding. Despite this, it still brought me fun and so many lasting life lessons. It taught me self-control and hard work and to keep pushing for what you want to achieve. Whether this is for a trick that you envision and wish to create, or a dream to move overseas and embrace new experiences, it makes no difference, they both require the same things: determination, hard work and self-control.
I moved to Australia as a student and lived there for five years. In this time I saw a country where skateboarding flourished and saw how powerful the skate community could be. It was after some time that I had a vision, a dream to give back to my home country. Many leave Nepal to migrate overseas in the hope of a better life, but for me, this felt like I was escaping. I was in Australia, making more money in a month than most Nepalis would make in five years, experiencing a life that
I never could have imagined, yet, something was missing. I realised that instead of escaping, I could learn, grow and then eventually return to Nepal – with something to give back. I had studied and worked in construction in Australia and had a passion for skateboarding, so over time it reached a point where I wanted to return to Nepal and a build skatepark. I started my own construction company a few years upon my return and built Nepal’s first skatepark with help from my Australian friend Lex and some local Nepali skaters in Lakeside. Nothing as big and well finished as the recent builds in Pokhara and Kathmandu, but it was something – something that brought the skaters together and to create and build. The main motivation for me was that I didn’t have a skate community growing up, or a skatepark, but if I built a skatepark the next generation can have that which I lacked as a kid. The dream was to build the facilities and create a positive community for the youth.
I think as you go through life and get older you begin to realise that life isn’t all about taking – you have to give back. Skateboarding was something I felt worthy of passing on. 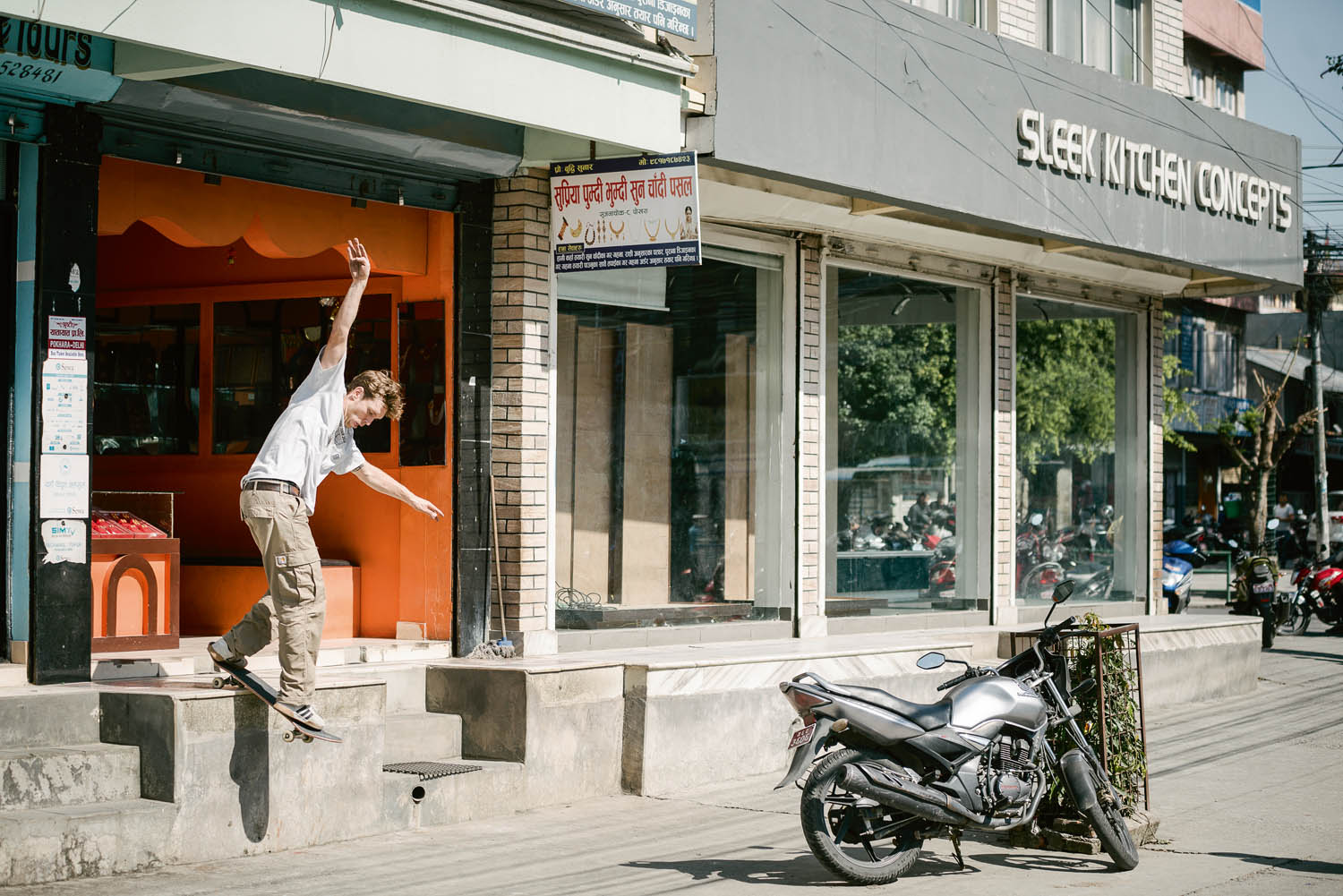