Pete Thompson was one of the most recognised names in skateboard photography from the mid-nineties to the mid-2000s. He was a staff photographer for Slap, then Transworld and later contributed to Skateboarder. Pete is currently working on a book consisting of largely unseen photos from that era (more on this in the future),  but why we’ve decided to speak to Pete this week is because he was one of the first photographers to consistently shoot with Stefan Janoski. He first shot Stefan when he was a flow kid living in Sacramento and then continued on documenting Stefan’s rise in the skateboarding world until he became a household name. Pete selected a few photos he shot of Stefan at pivotal times in his early skateboarding career and was kind enough to give a little insight.

(Photography and words by Pete Thompson)

This sequence was shot on pretty much the first day I met Stefan. During that time people were going up to Sacramento to shoot with (Brandon) Biebel; his whole career was really starting to explode. So I went up there (from SF) to shoot something with Biebel for Transworld. Biebel had a pretty deep crew, I think that day it was him and five of his friends and everyone was pretty good. Biebel was of course like Biebel, super excited and outgoing and then his friend Stefan was sort of off to the side, being quiet, kind of nervous. So Stefan was skating and Biebel being Biebel was like, ‘yo dude my homie Stefan… He rips!’ and so you know I didn’t really think anything of it because it was one of the first few times I had shot with Biebel and I was mostly focused on him. Stefan was like this unassuming kid who wasn’t pushy and like trying to come up; he was just having fun. And then Biebel was like, ‘you should shoot Stefan do this trick,’ and I remember thinking, ‘I hope I have enough film for this whole day.’ (pre-digital photos days) Nothing against Stefan, I just didn’t know who he was and how long it would take him to do it. And I may have even said, ‘yeah I’ll shoot this but I can’t get into it very deep because film is film, and I only have a limited amount.’ I needed to save film to be able to shoot Biebel for the Am Issue. But then he started trying it and I shot it and then he did it. I remember sitting on the stairs and him running back up after he bailed a few and every time he ran up he was smiling and like so psyched, ‘Ah I gotta try it again. I got it, I got it, I got it!’ He was just a very understated guy, he was having fun on his own kind of. He was just psyched to see if he could do it. And then he did it once and it was kind of sketchy and then he did it again. The second one I remember thinking, ‘wow I just got a good sequence on just 2-3 rolls of film,’ and that was rad. But I didn’t think too much of it at the time. The way that he skated, tricks didn’t look that hard for him. They had this finesse that kind of took away from the difficulty of the trick. He just looked lackadaisical a bit, which made you look at what he was doing from a different perspective. So now I look back on this sequence (which was never used) I think, ‘that’s a fucking sick trick! Why didn’t I see this as being as sick as it was?’ and I think it’s just because I went up that time to mainly shoot Biebel. But then every time I went up (to Sacramento) Stefan would get something and that’s kinda how it all started.

I had been up to Sacramento and shot with Stefan a bit but I think this is the first time I shot with him in San Francisco. I think he had come down to go by Think and see Greg Carroll and those guys. He had just started getting Think boards. I don’t think he had a shoe sponsor yet, but he loved riding Axion shoes. So we went to a lot of spots and this garage door gap was one of them. It wasn’t something that many people skated, but he frontside flipped like 3-4 times in a row just perfect. And again, the way he skated, the lazy, lackadaisical style just made everything look really easy. If he had struggled with stuff more I would have been like, ‘ah yeah it’s sick!’ but it looked so easy for him and it made me doubt it like, ‘ah if he isn’t struggling over this than it must not be that hard.’ But then you take someone else there and they’ll be fighting for it. 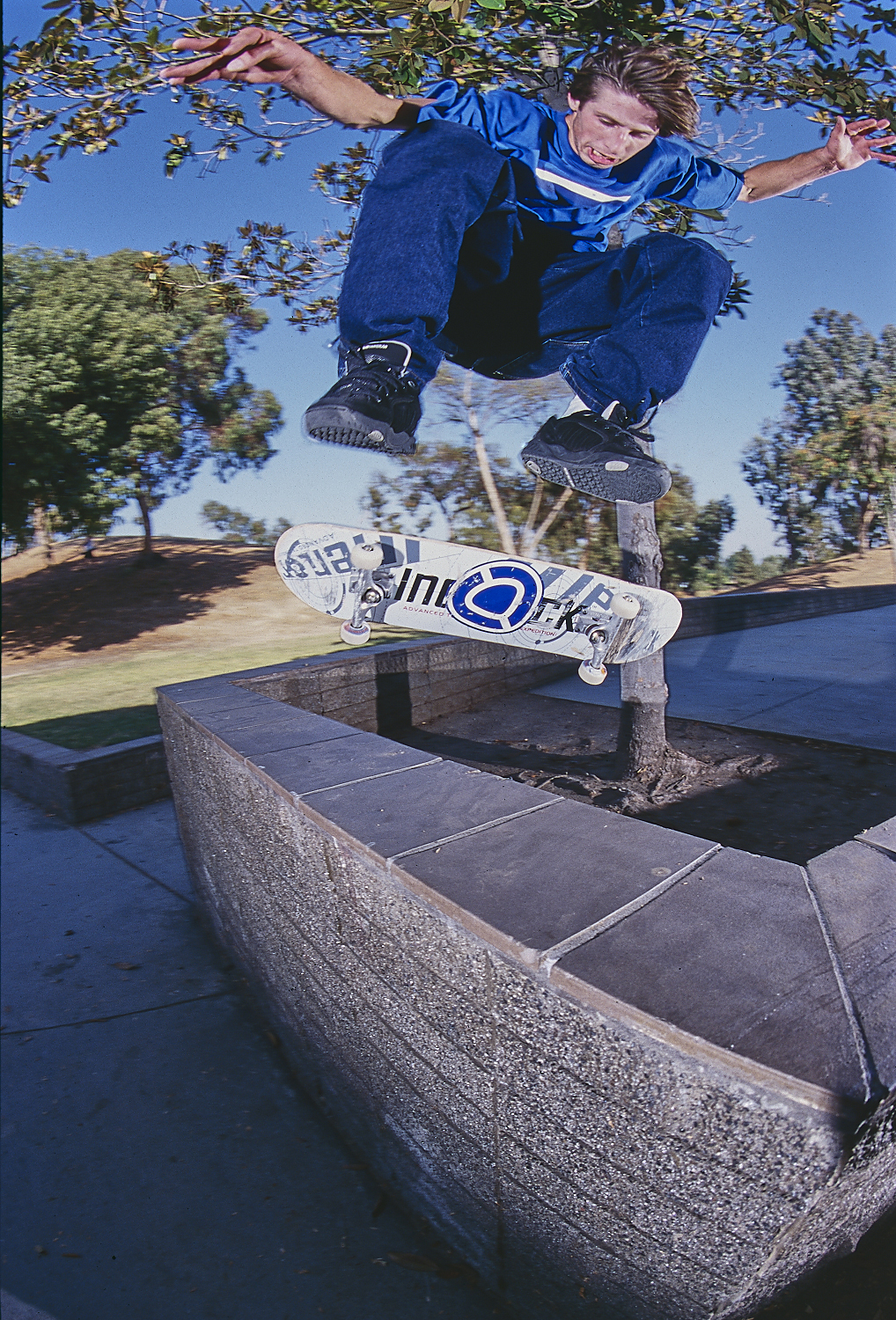 I was living down in Long Beach at the time, and Stefan came down and I think he was with Kyle Leeper. Stefan stayed with me and I think I had just got on Expedition at that point and not that many people… Nobody knew about him in Southern California. So we go skating and I remember there was a big crew, two carloads of people and we went to this school. And so Stefan was there just cruising around you know… He was somewhat introverted back then, but always really happy. And so Fabrizio (Santos) was starting to skate this gap and then Stefan started to skate it. He switch ollied it first try and I obviously knew who he was, but I think a lot of guys there were like, ‘oh who’s this new guy?’ So then he starts to try to switch heel and asks if it had been done before. ‘Nah I don’t think it’s been done,’ someone says. Fabrizio was trying to frontside flip it, Stefan the switch heel and then they both landed their tricks within a few tries of each other. So it was just rad to see this kid who I’d met in Sacramento who nobody really knew and again, he’s in Southern California now in the same position where no one really knows of him, and he’s just making friends, ripping and having fun. So I just had a sense of, ‘ah this is rad being able to watch this’, not only in Sac (Sacramento) where I first met him, but again in Southern California. After like everyone there was like, ‘all right, who’s this kid? Where’s this guy from?’ There was no social media back then, so when you had a skater that you had seen skating that most people hadn’t seen there was sort of like this thing like, ‘ah yeah I’m gonna bring so and so with me and he’s always gonna get something, people are always gonna be psyched and he’s just a rad addition to the crew no matter where you go.’ And that was Stefan. That day was the day that I realised that you could take Stefan anywhere and he could skate anything and he would do stuff that wasn’t the norm. He could do stuff that a lot of other people considered really hard tricks. He could do them easily and he could do them on gaps, rails, ledges… He could skate anything. The tricks that were easy for him, were really hard for everyone else, and those were his go-to tricks. 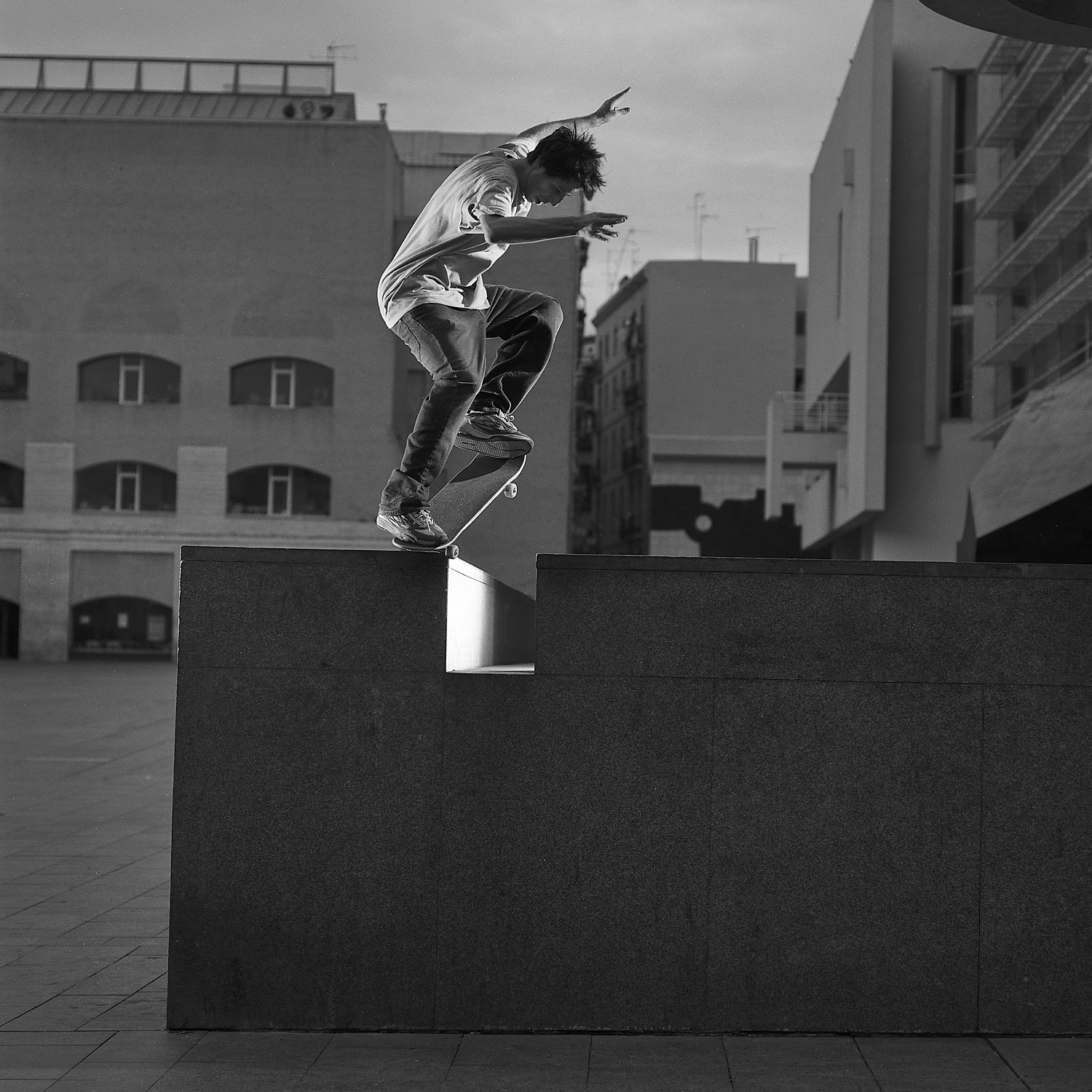 This was the first time that both of us had been to Barcelona. It was exciting going there with Stefan because after skating with him in Sacramento and in Southern California I could see how natural and talented he was. You had this sort of feeling like he’s gonna kill it. You could take him anywhere and he would get stuff. He would get sequences, stills, footage, whatever… He just flowed in a way that allowed him to be really productive. So that trip was me, Stefan, Colt (Cannon) and Ricki Bedenbaugh and I remember Stefan was such a skate rat. He was trying to get Ricki out early to film lines at MACBA before everyone woke up, which was funny, because he wanted to skate late at night too. That’s when that nollie backside 5-0 at the MACBA long ledge happened. 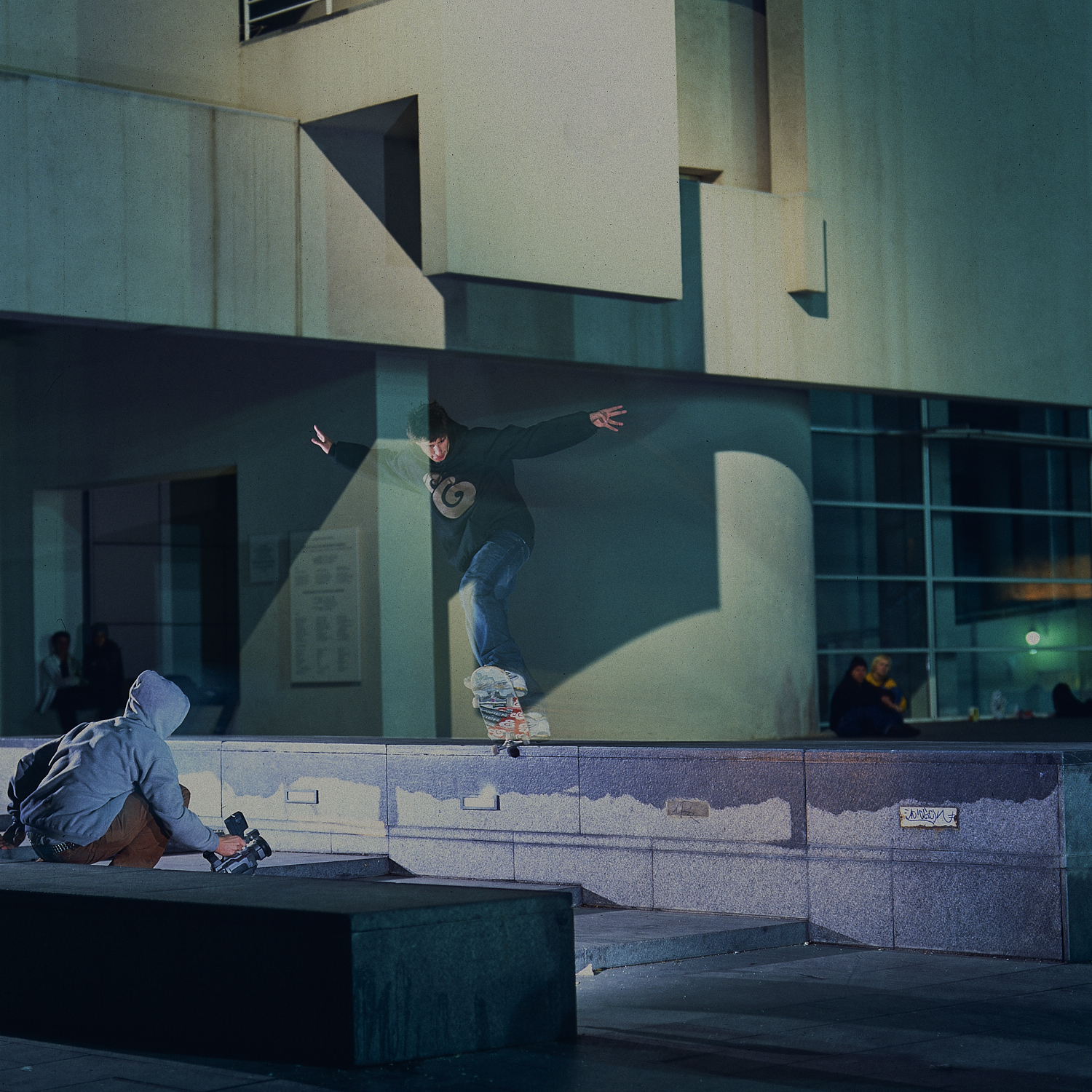 I’ll put it this way: Stefan was so productive on every trip that we went on that there was a point where when he wanted to go skating sometimes I would think twice about bringing my camera, because I was like, ‘we have a million things right now and he’s kind of just in cruise mode,’ but that was a huge mistake because if I went out, and didn’t have my camera, he was gonna do something amazing, ha ha! You know we’d eat and it would be 11:30 at night and he’d be like, ‘hey let’s go down to MACBA.’ He was so productive; that whole trip was like that. 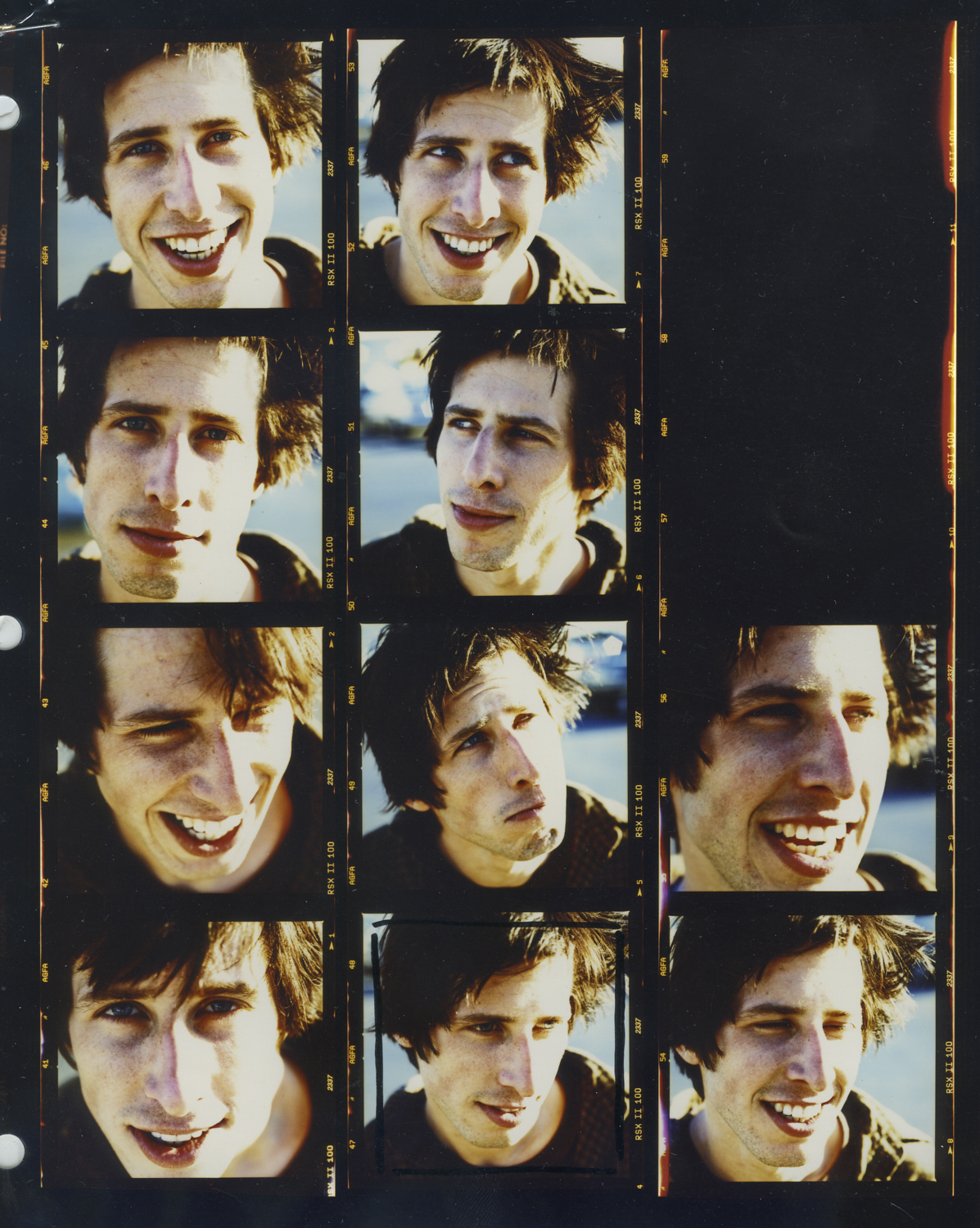 I think Stefan is an animated guy and I think that was the idea behind the portraits. He was okay having his portrait taken. A lot of guys where weird about having their portrait taken, but I remember asking him, ‘hey dude can I shoot some portraits of you?’ And he replied (in a soft, quiet voice): ‘ok, cool.’ So this contact sheet ended up being kind of a slice of the different sides of his personality. I think it just shows a sense of him being care free, unassuming and understated. And I think you can see he’s just a fun guy. Not fun I like ‘I’m going to entertain everybody’, but fun from the standpoint of he’s just a happy person. 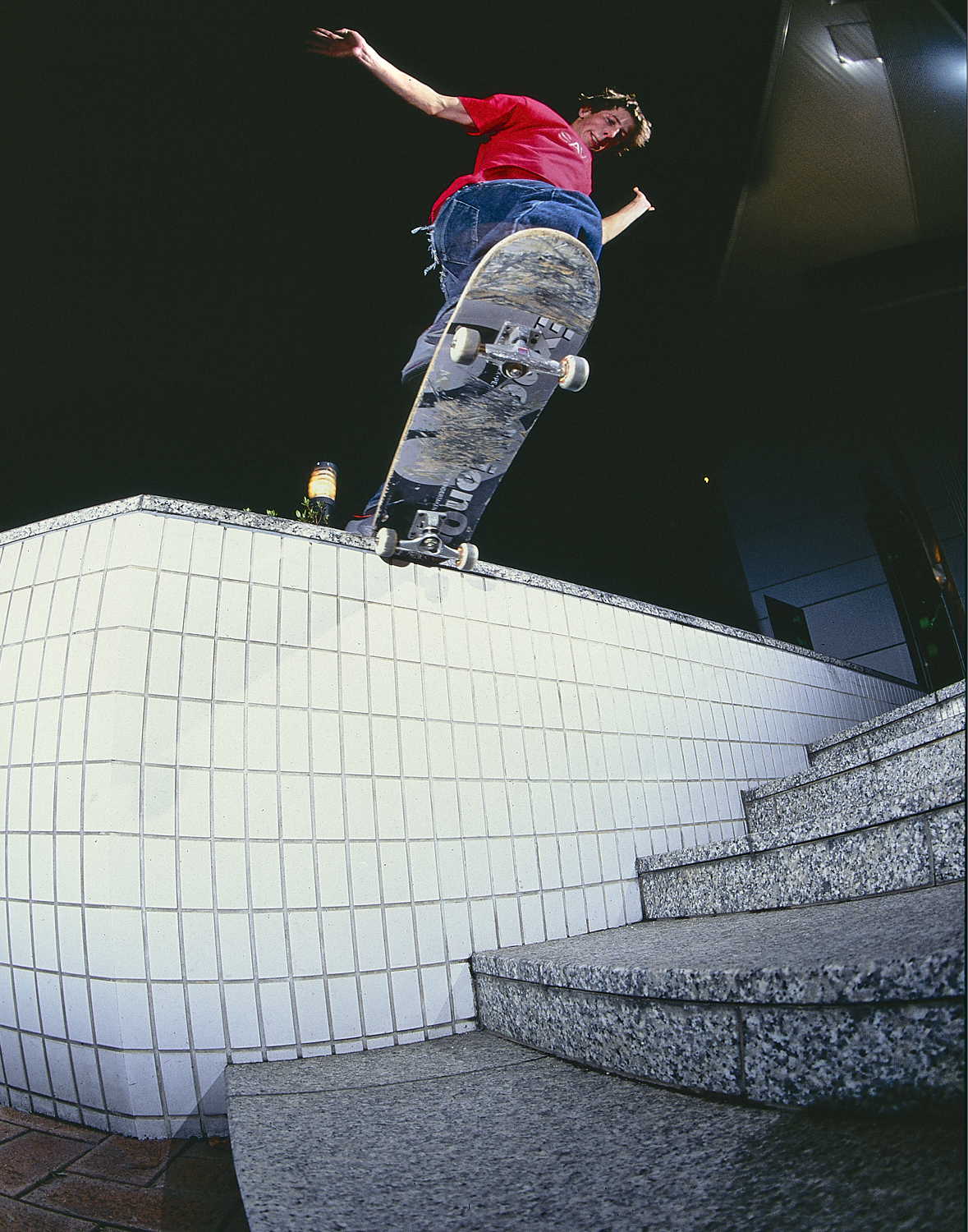 Japan was interesting… Everywhere we went Stefan was ripping. He would skate spots by himself, I remember this big set of stairs that he kickflipped and no one else was skating it. It was just him and he was having a great time. Another thing I noticed about Stefan in Japan was that he really fed off the energy of his friends. If his friends were there, his teammates… That was a really powerful element to going out and skating. Kyle (Leeper), Karl Watson, Richard Angelides and the Expedition crew were all there with him and Kyle was one of his closest friends… Also on that trip he discovered… OK Stefan is a quirky guy; he has a quirky sense of humour and his artwork is amazing in a sort of quirky way. This was the trip that I really started to notice this as there’s so much quirky shit happening in Tokyo and he was just loving it. Weird food, weird stores with weird shit in them and he would get so hyped on the silliest little Japanese thing. He would just go off and buy weird Japanese collectibles. Stuff where you’d be like, ‘What is that?’ Oh and the snacks! Oh my god he was so hyped on the Japanese snacks; they’re all individually wrapped and made of who knows what… We had a great time in Japan. 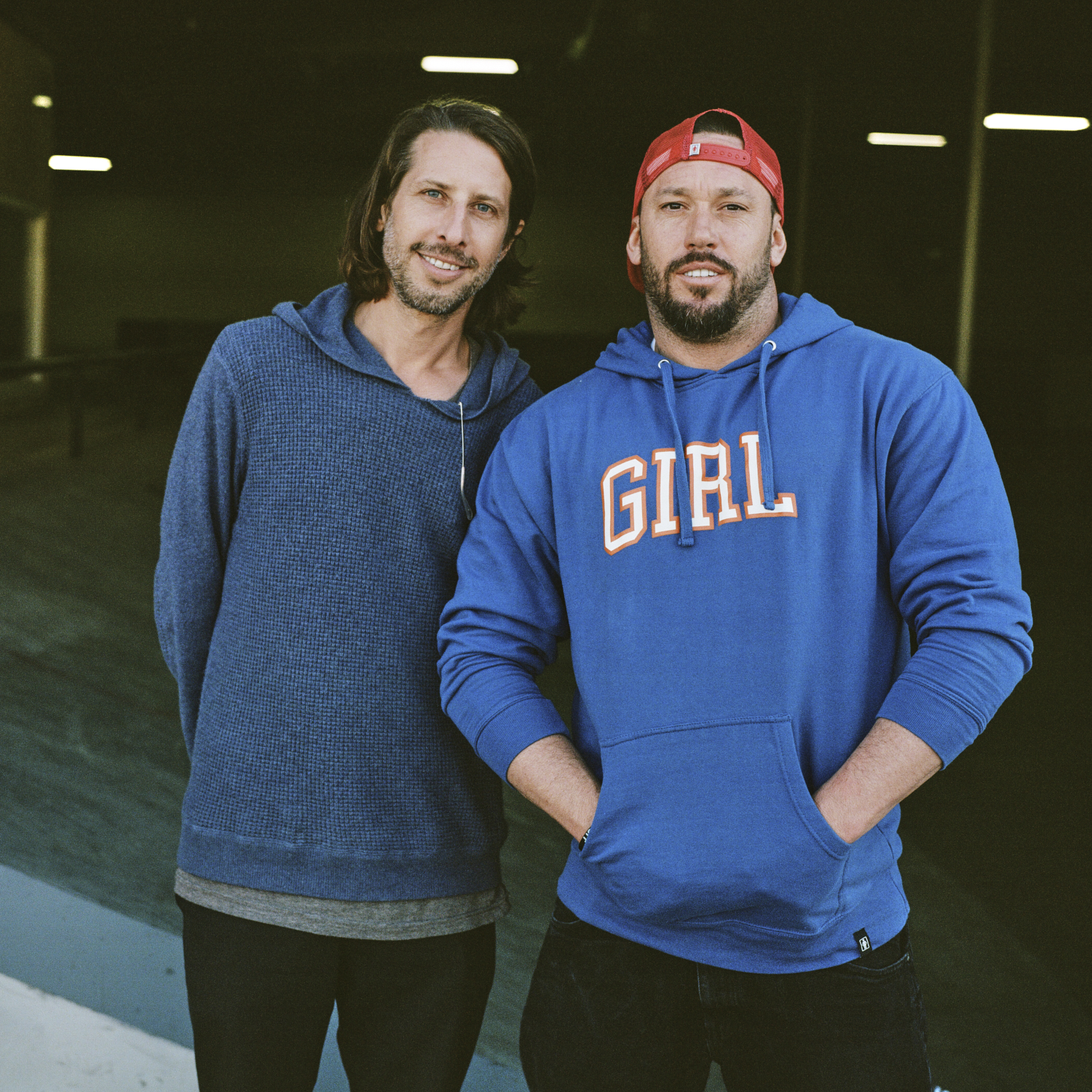 Being around those guys now, 20 years later, is so amazing. After all these years a lot of stuff has changed and a lot of people go different directions and our lives are so different for so many people, and their lives are much different now today as well, but seeing them together… That’s like a friendship that has really great chemistry… And they are such different people, but when I saw them together I had this warmth… Just seeing that friendship that has been strong and consistent for so long… It’s heart-warming.