It’s on! The #VolcomTripleQuest in Paris has begun. One trick at each of these spots in Paris (Creteil city council plaza, La Republique and Le Dôme) and there’s €11k up for grabs!

Skaters have from today (September 11) until September 19th to do the below:

Spot 1: Get a trick on one of the Creteil Ledges, located at the Creteil city council plaza (metro 8 from Republique)

Spot 2: Get a trick on the Volcom Stone, Place de La Republique

Spot 3: Get a two-trick line including the 3 flat 3 double set at Le Dôme

The winners will be announced at the Triple Quest Paris award party on Friday 20 September, 21h30 at The Bottle Shop, 5 rue Trousseau, 75011 Paris. 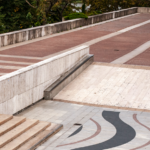