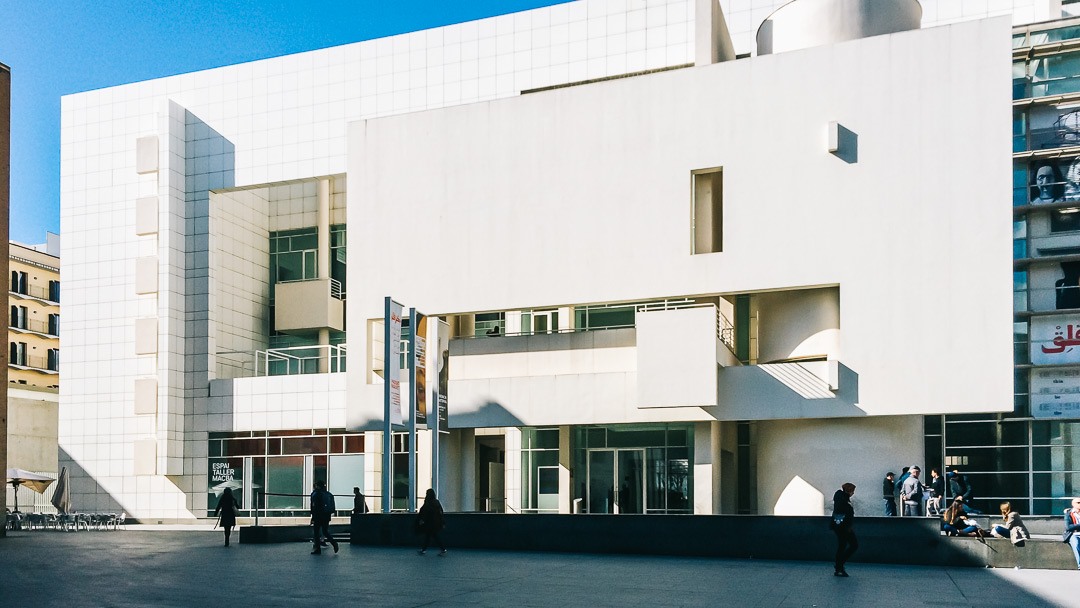 Opening photo by Sam Ashley. Words and the rest of the photos by Jon Fletcher.

I was 14 when I booked my first ticket to Barcelona. A week before flying I broke my arm. Rock fakie, and a wrist in a right angle the doctors had to break back into order. With the arm set rigid into a new right angle, I spent that week sat at MACBA, watching.

In all that time to sit and feel sorry for myself I noticed two things every skater thinks when they first visit MACBA. The first, that they accidentally built a black marble palace for skating, the second—and even more mind-bending thing— was that they let it happen. This is not some back alley curb, it’s the front of a modern-art museum, with customers, tourists, security guards.

The police would occasionally roll through, halfheartedly, sending skaters scattering into the streets, or the security guard would pull a guard rail across the top block, a reminder of who was boss for a few hours. At about midnight, street cleaners would hose everything down, sluice the beer off the blocks and end the session until tomorrow, but for the most part you could skate in peace.

In the ten years I’ve lived in Barcelona since then, I’ve waited for the day when I go past the square to see the high-vis jackets starting to tear down the blocks. But, this day hasn’t arrived. Even when the builders were there in force one day, prying up marble, they actually made it more of a spot, adding new blocks and a 10-stair at the mouth.

There’s an uneasy peace at MACBA now. The skaters don’t get in the way of the gallery doors and the people passing through get a spectacle to enjoy. But, the barrio that MACBA sits at the heart of, Raval, is mounting a campaign to ban skateboarding. They want to flush the skaters out and end the square’s unofficial status as the outdoor bar of the barrio.

If you don’t notice or care that this plaza happened to be an inadvertent gift to European skateboarding, you could be forgiven for seeing why people want it shut down. There’s fights. Drunks and drugs fill the darker hours of the evening when it’s harder to skate. It’s ugly at times. Stand in the wrong corner and foam-headed piss-rivers snake towards you. There’s rubbish, noise. People drip away through the night but cans line the blocks until the the cleaners clatter them away.

The thinking is, ban the skating, and clear the square of the ugly social presence that some Raval residents see MACBA as.

But, it’s the idea that the relaxation of the rules that allows skateboarding is the same licence that give people the idea they can do whatever that is so wrong-minded. It’s the New York broken windows theory put on the shoulders of skateboarding.

But, ending the skating at MACBA is not going to be the end of anti-social behaviour at MACBA.

Skateboarding can have its critics. It’s loud, insular, ostensibly dangerous, and adds no direct commercial value to the square. But skateboarding turned the empty space of the museum front into something. It carved out a space for people that are usually edged out of other public areas. Cities need places for those that make others uncomfortable. For a modern art museum, the odd joy people can draw from their ledges should be a source of pride, a testament to the weird ways humans find to express themselves. 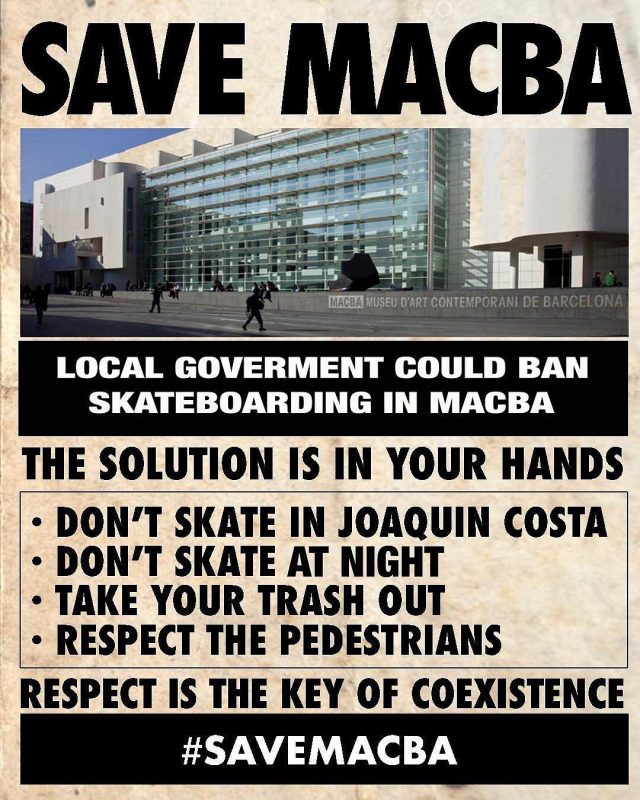 Firstly, a ‘zero tolerance’ approach would rely upon direct police intervention, and, increasingly, intervention by private police and security guards. In order to kick skating out of MACBA you have to transform a public plaza into a battleground.

This doesn’t just come from the perspective of a skater looking to keep a spot. Research studies from the National Campaign Against Violence and Crime in conjunction with the National Anti-Crime Strategy have shown that this approach does more to damage cities than the problem they are trying to move.

In the American city of Berkeley, California, large numbers of police officers were deployed into the Telegraph Avenue area (Noguera, 1996). Police presence not only cost the city more than it could afford, but it resulted in scaring away of many of the tourists and customers who frequented the restaurants and shops in the area.

Closing down MACBA would undercut the basic principles and practices of ‘community policing’. It’s coercion rather than co-operation, social exclusion rather than participatory inclusion, and street-sweeping rather than problem-solving.

Writing in Public spaces and community crime prevention, Rob White explains, ‘In many instances, however, such an approach merely exacerbates bad feeling between the targets of intervention and police,shopkeepers and general consumers’. Antagonism becomes the primary basis of interaction.

‘The intentions behind the public use of space always has unexpected outcomes. There is unpredictability. People rarely seem to do what they are expected to do and it is the unexpected that makes cities so vibrant and worthwhile.’

A community becomes a battleground.

In a response to the objections of the residents of RAVAL founder of MACBA LIFE Alex Braza, is working on a solution. “We’re talking to the government and the neighbours, and they see that we’re on their side. The main problem is the noise at night,” Braza says. “We want to find a better solution than to ban skating at MACBA.

The SAVE MACBA campaign is working to educate skaters on how they can enjoy the spot and live alongside the non-wheeled community. “If people get more conscientious about it we will keep the spot.”

And it’s worth remembering that this is not a residential square. Skating after 10pm has already been banned. There is an active campaign to educate people not to skate through the side streets, give pedestrians right of way, and not leave their rubbish. Skaters are working to make MACBA better. 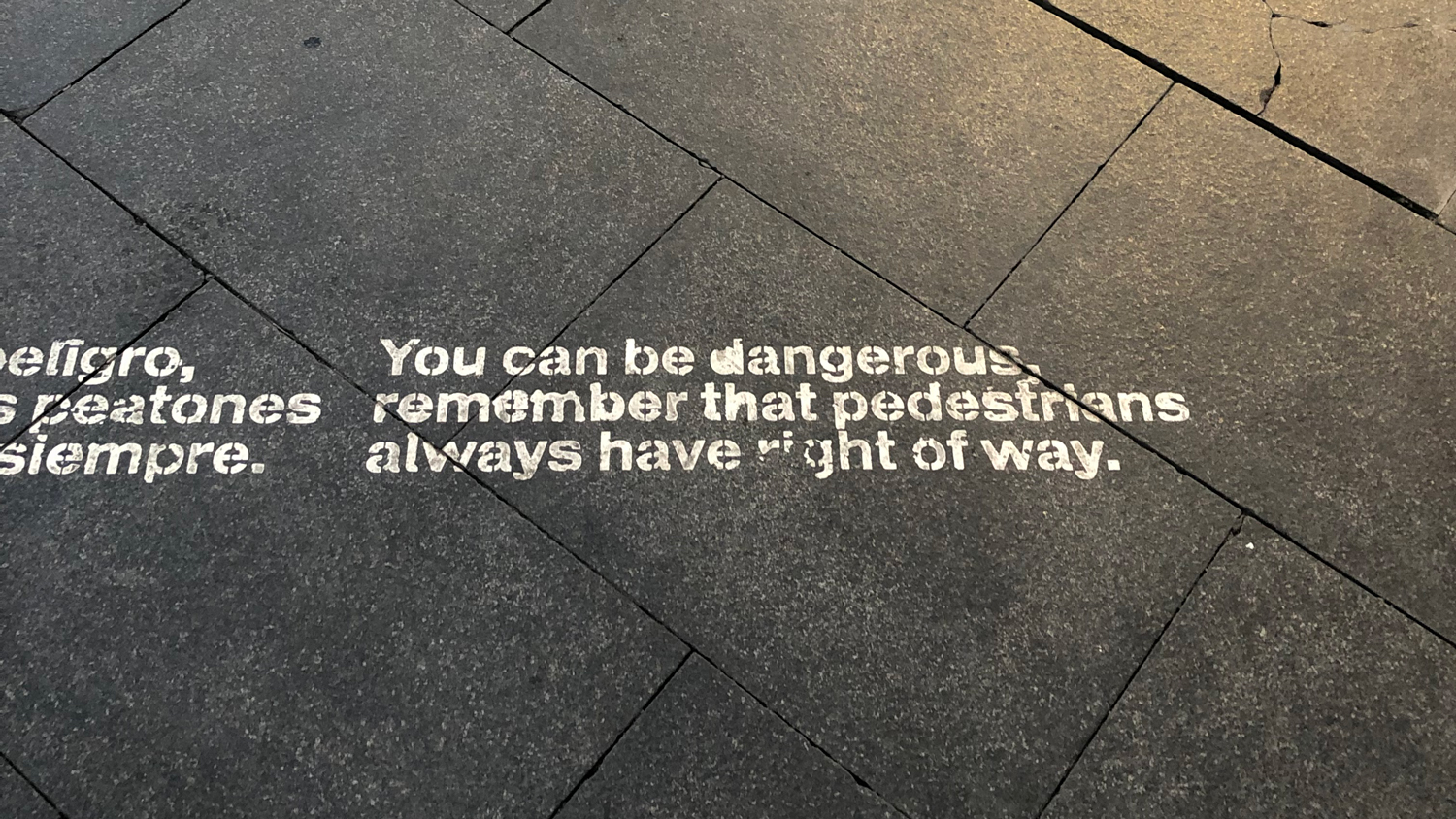 Tuli Campus, manager of Rufus Macba created the #savemacba campaign to help spread a code of conduct that will help the skaters at MACBA live alongside the residents of Raval.
“There are a lot of ungrateful souls out there that don’t know what they have until it’s gone.”

Less litter and more polite skates won’t solve the deeper social issues that residents complain about, namely the crime. But destruction of the space won’t solve these issues either. Like the skaters scattering as the police cars roll through, it will just get brushed into darker corners. Pushed back into the barrio.

The decision to police public places with a low-key approach that focuses on major crimes, signals tolerance and inclusion rather than exclusivity. It’s is a decision not to sanitise the space by excluding those whose presence may make some people uncomfortable.

Rather than a zero-tolerance ban at MACBA, using a knowledge of the local area, and local community needs, issues, skating can remain part of the culture of the area. It’s an approach that encourages variance in age, race, and income within the community.

This needs co-ordination of various groups, such as SaveMACBA and individuals from the local community with ongoing forums for discussion and assessment of the issues surrounding crime and anti-social behaviour.

MACBA is an odd corner of Barcelona. Not without its problems, but not without its own community and uniqueness. To end skateboarding at MACBA will only serve to disperse this community but sanitise another city space without addressing the underlying issues.