Just over a year ago I heard about someone named Joel Pippus who was using skateboarding in his work with high needs kids in Alberta, Canada. Now obviously this isn’t something completely new ­— we’ve all seen the incredible work skate aid organisations have been doing all over the world ­— but the difference here is that the benefits of skateboarding were looked at through the lens of neuroscience. Using the Neurosequential Model of Therapeutics as a starting point, he studied how certain aspects of skateboarding could have a positive effect on specific parts of these traumatised children’s brains. Below is a chat with Joel about his work, the type of kids he helps, how skateboarding entered the picture and if his findings could be applied elsewhere.

Can you start off by giving us a little bit of background information about yourself? For how long have you been skateboarding? How did you get into this line of work?
I am 33 years old and have been skateboarding for about 20 years. I have always been passionate about working with youth and have done so off and on since I graduated high school. In 2010, my (now) wife was doing a nursing practicum and had the opportunity to speak with a man who worked with very high needs kids. She thought it sounded like something I would be interested in, and as a result I applied at Hull Services. That was eight and a half years ago and I am still going strong! For my first seven years at Hull, I worked in a therapeutic campus-based care programme for kids who are 12-17 years old, have cognitive delays, trauma and abuse histories, histories of aggression, and minimally two (but usually more like four or five) mental health diagnoses. Once my wife and I began having kids (we have two little boys) I had difficulty managing my life at home while doing shift work, so I moved over to William Roper Hull School. At the school I currently work as a School Transition Counsellor, which means I provide crisis support, family work, transition planning and training for my classrooms. I also do a lot of crisis support and training for classroom teams around the school, crisis intervention training for the agency and have taken the lead on the rollout of our skatepark and skateboarding programme.

Before we get into the skateboarding program, can you tell us a little bit about the kids you work with at Hull Services?
Hull Services is a non-profit organisation that works to support the unique needs of children and families impacted by emotional and behavioural problems, learning disabilities, mental illness, developmental delay, neglect, abuse, poverty and family violence. We have 27 programs including therapeutic campus-based care, school based programs, early intervention and prevention and secured programs for kids who are at risk of harm to themselves or others. Hull offers services that include things like individual, group and family therapy, remedial education, academic and vocational development, life skills training, parenting support and family counselling.
Hull Services is also the only Canadian Flagship Site for the Neurosequential Model of Therapeutics, which is a developmentally sensitive, neurobiologically informed care model that was developed by Dr Bruce Perry and the Neurosequential Model Network. Perry is a psychiatrist and neuroscientist who focused on how the mental health field and the field of neuroscience could support children and families who have experienced significant trauma. The model has changed the way we understand and work with the kids we serve.

How did skateboarding enter the picture?
In the spring of 2015, the Matt Banister Memorial Skatepark was built by Newline Skateparks on our main campus. Matt tragically passed away from an overdose seven years earlier. Both of Matt’s parents have been involved with Hull Services as members of our Board of Governors for years, and a friend of theirs suggested that a memorial skatepark be built in Matt’s memory (because they felt skateboarding had been a healthy activity in Matt’s life) at Hull because of their connection to Hull. That friend had a family connection to Newline. Some incredible fundraising happened, Newline pitched in, and Hull was the recipient of a beautiful new skatepark.
Once we settled into using the park, we immediately began to notice that time spent in the skatepark seemed to be having a positive impact on the overall treatment kids were receiving. Kids that were ‘mortal enemies’ in the program were able to connect over time spent at the skatepark. It is often difficult for kids to transition out of an activity that they really enjoy (especially the kids served at Hull). It was more common for kids to go into crisis over the transition to the skatepark than the transition back from the skatepark, which pointed to something about skateboarding and time at the park being emotionally regulating so they were better able to handle that transition. When processing difficult emotions with staff, kids began referring to time at the skatepark as being helpful in that process. All of this led us to the connection between skateboarding and how this was impacting the kids’ brain through the Neurosequential Model.

How was the idea received by your colleagues?
There was some initial caution within Hull about skateboarding. That being said, the response quickly became overwhelmingly positive once we started to explain the connection between skateboarding and the NM, and especially once other staff were able to observe how perfectly skateboarding fits as an activity for the population we serve at Hull.

Why, in your opinion, is the skatepark such an effective therapeutic milieu?
My experience has been that a skatepark is absolutely a therapeutic milieu. I think this is true for a number of reasons including the fact that skateparks are designed to allow creative and unique thinking (something that is praised in skateboard culture), they provide an opportunity for patterned and repetitive skill development and are a meeting place for anyone interested in being a part of the skateboarding subculture. Maybe most importantly, skatepark etiquette is based around social skills so just by following skatepark etiquette socials skills are being learned and practiced.

How did skateboarding apply to the Neurosequential Model and what you guys were trying to achieve?
The unfortunate reality is that the vast majority of kids that receive treatment at Hull experienced serious and often pervasive trauma during their childhood, which can have a massive effect on brain development. The NM is powerful because it highlights the possibility of (through various types of activities) healing those traumatised brains.
The skateboarding fits perfectly with all four of the areas of the brain highlighted in the NM. The first domain of the brain highlighted in the NM is the brainstem, which is responsible for sensory integration (skateboarding is full of healthy sensory stimuli – everything from vibrations through your feet to the specific sound the pop of the tail or each grind and slide makes). The second area of the brain in the NM is the diencephalon, which is responsible for self-regulation (the patterned and repetitive nature of skateboarding – from pushing down the sidewalk to pumping around a park – is organically regulating). The third area is the limbic system, which is associated with relational attachment (skateboarding provides an opportunity for our kids to become a part of a pro-social activity and inclusive community). The fourth and final NM area is the neocortex, which is the smart part of the brain, the part that is responsible for executive functioning and skill development (skateboarding is entirely based on the patterned and repetitive process of skill development, and is unique in the way those skills can be combined to link different tricks). What all of this means is that skateboarding has the ability to heal brains from past trauma and as a result literally change lives. 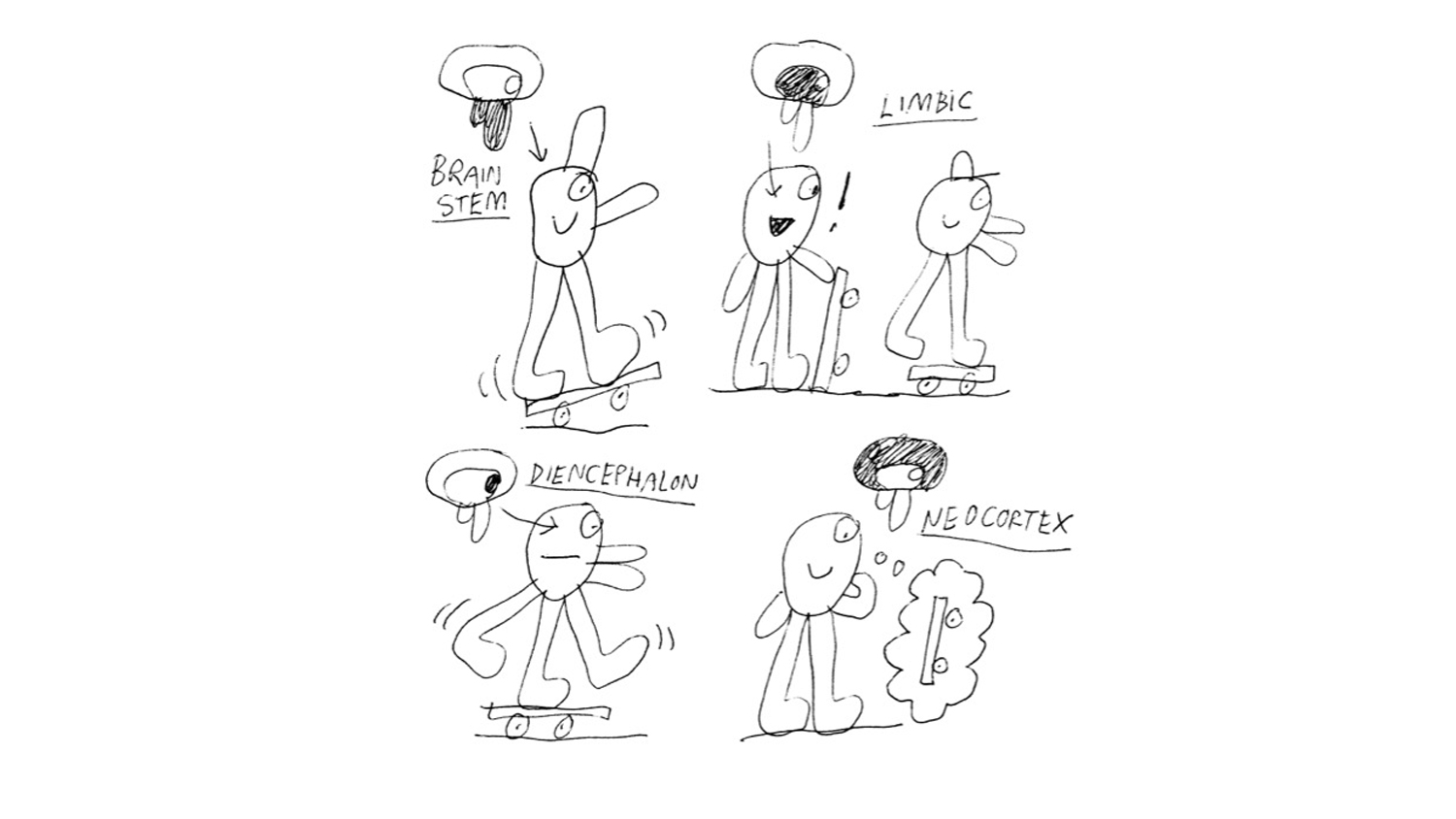 Can you give us some examples of cases where skateboarding has played a key role in helping these children?
One student joined skate class and had never skateboarded before. After the first day he was hooked. He started asking every class for things he could work on at home (our students rarely if ever do homework in other classes, and they definitely don’t ask for homework) and would check in with me throughout the week with his progress. He progressed rapidly, had the opportunity to participate in a skate camp over the summer and regularly messages me with updates. He sent me a video of his first kickflip, his first 3-set and he comes back to skate with me and try to film tricks. Most importantly, he is a young person who struggled at times to manage emotions and was socially isolated. His ability to manage his emotions has improved significantly and he is spending hours each evening in the community making and developing friendships through skateboarding.
Another student has a horrendous trauma and abuse history. This student advocated to be a part of the skateboarding option at our school and has articulated that skateboarding helps her to feel calm and regulated.  She has been regularly requesting to spend more and more time in the skatepark.
I work in a school that serves students from grades 1-12 and that have severe behavioural and mental health challenges that are often related to trauma, abuse, and/or addiction. In the first two months of this school year, roughly 85% of those students have already been on a skateboard and most want to go out to the park as often as possible. Because skateboarding is organically regulating (and despite this severity of behaviours that our students regularly present with), we have not had a single severe behavioural incident at the skatepark.

How can your findings be applied outside of the work you do at Hull Services? I know you reached out to Skateistan…
These findings can be applied in numerous ways outside of Hull Services. My hope is that organisations like Skateistan or Academy Skateboard Collective (organisations that among other things use skateboarding as a bridge to education for marginalised populations) can capitalise on the connection between skateboarding and neuroscience and become even more effective in the incredible work that they are already doing. I hope that this information can be a tool for advocacy so communities will prioritise providing space for skateboarders, so schools will have skateboarding classes (which provide incredible cross-curricular opportunities) and so that in general skateboarding can be seen in a more positive light. In general, my dream is that this information will enrich the work of anyone anywhere that is skateboarding with kids. Let kids skateboard: it can change their lives.