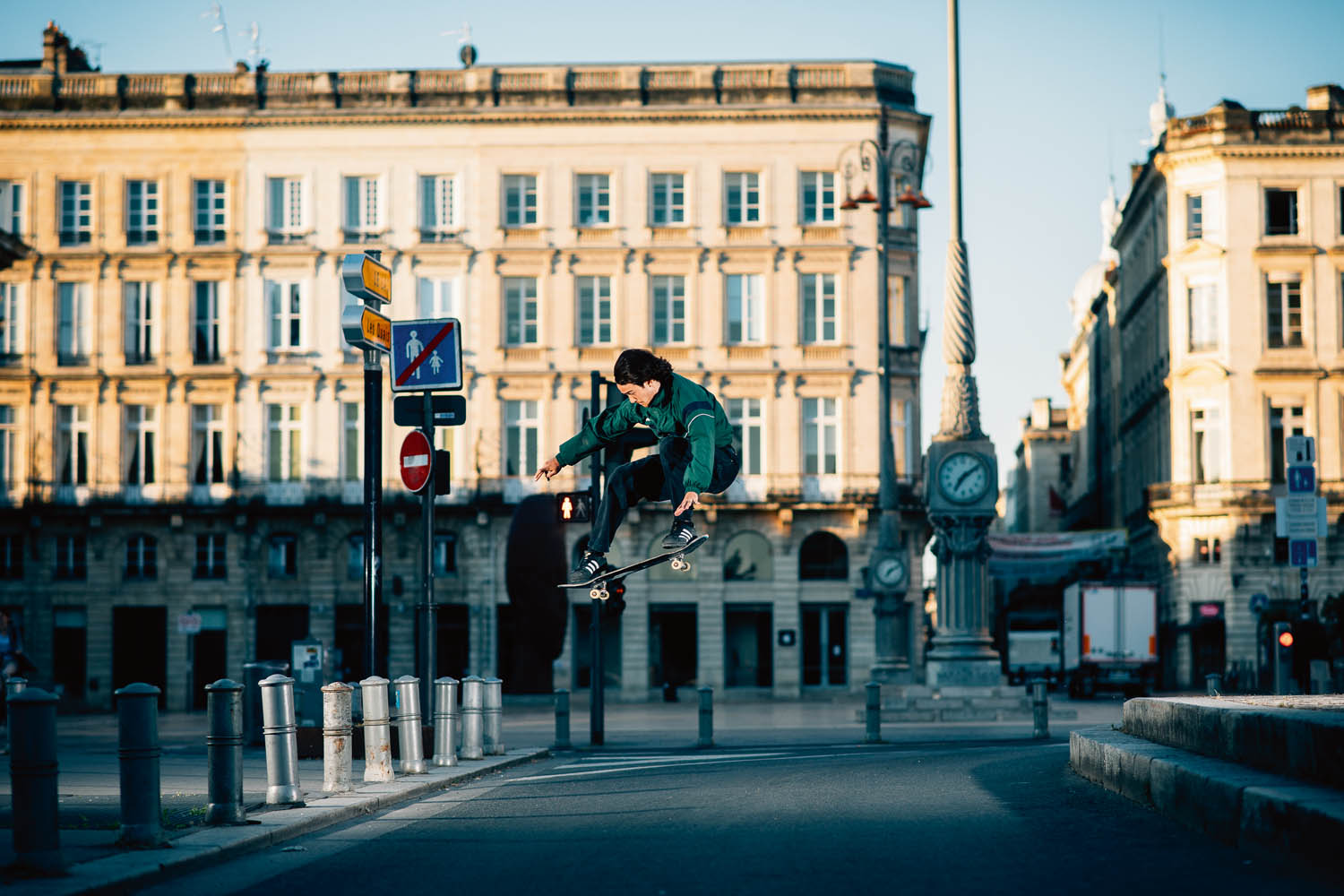 For issue 31 of the mag eight European photographers were tasked with coming up with a concept for an article that could be shot between the 25th of May and the 1st of June1 2020, just as Covid-19 lockdown restriction measures were starting to ease… Clément Le Gall chose to shoot solely between the hours of 6am and 8am in Bordeaux, Alex Richard wrote some words to accompany the photography and Luc Mazières was on filming duties.

When Clem first floated the idea, without any kind of hesitation or doubt, for me the answer was yes. I was down.
Obviously you had to be quite committed but it seemed exciting, like a new kind of challenge for which you had no choice but to outdo yourself.
The concept was to wake up early to hit spots that are usually pretty much skate-stopped by a constant flow of pedestrians and traffic, but also to take advantage of the unique light that creeps through Bordeaux’s city centre at dawn whilst documenting our exploits. 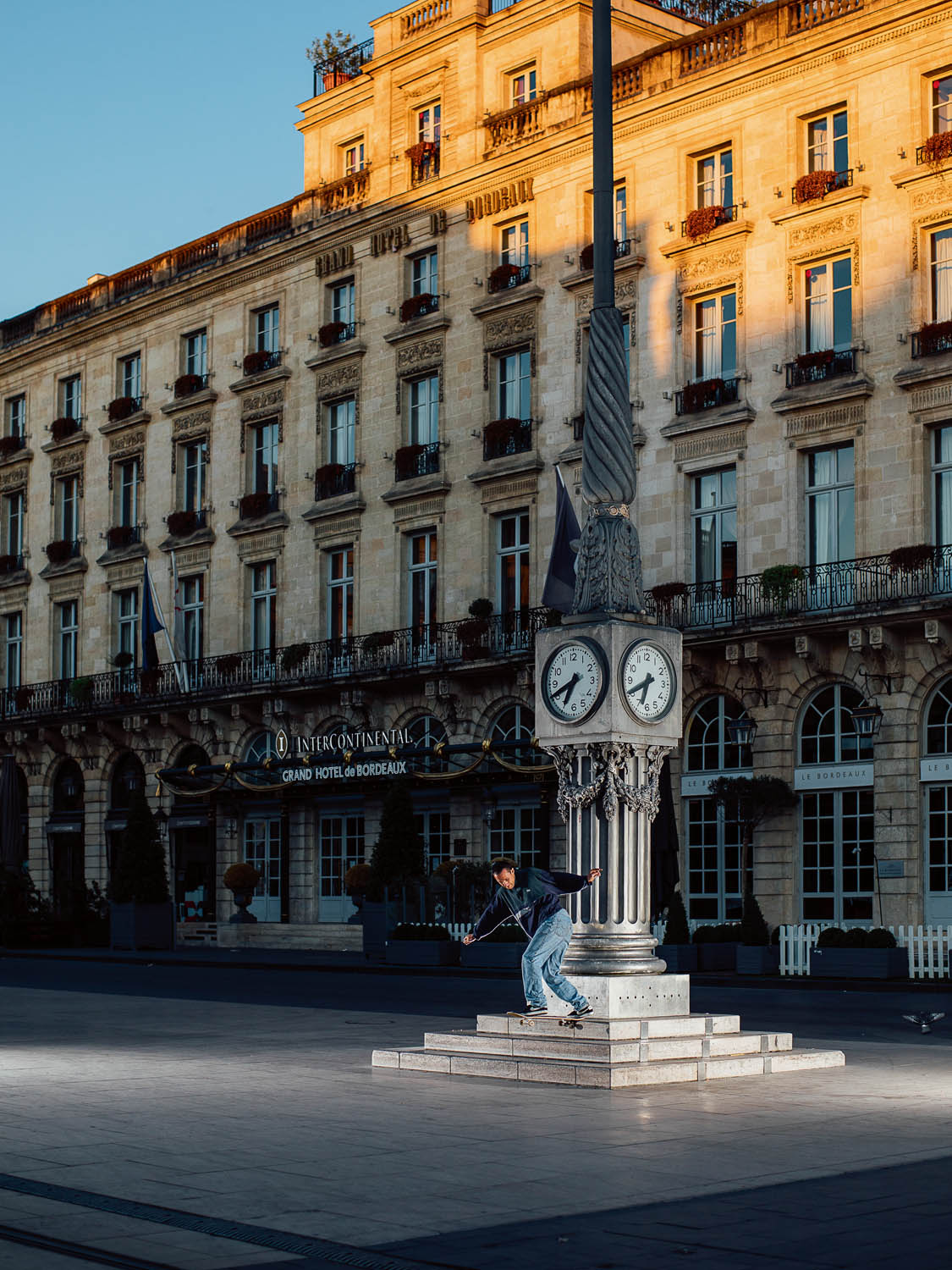 Olivier: Yo Alex tomorrow we’re meeting at 5:45 at the water mirror spot for that thing Clem is shooting.

Olivier: It’ll be Luc, Amélien, Clem and me…

Alex: Ok yeah I’m keen but working at 11 so I’ll let you know tonight if I’m definitely on it.

Olivier: Come on it would be sick if you came, the forecast is saying it’ll be clear blue skies all morning, the light will be so sick by the river.
Alex: I’ll let you know tonight!

Olivier: Ah man you’re not sounding too hyped on this… You are not into the idea anymore or what?

Alex: No no I am! It’s more my physical capabilities that I’m starting to doubt…

Olivier: To be fair I sprained my ankle last Monday so between that and my muscles still probably being half asleep at that time I’m gonna have to be pretty careful.

Alex: Alright I’ll just give you a call tomorrow around five.
Olivier: Come on let’s get it! Leo is off to some party but claims he’s just going to stay up to meet us on the session ha ha. Bet he’ll end up doing the best trick despite having been out all night as well…

Olivier: You hear that Dadou fucked his collarbone too? So Luc is supposed to cover for him in the kitchen at 11 after the sesh ha ha. Plus then Milou gets here tomorrow and he’s supposed to be filming him in the afternoons… There’s no way he’s surviving this week ha ha.

So the crew was composed of: Olivier Durou, our manager/coach who throughout the week tried to make sure that everything would go as planned and that everyone was present in spirit and body, Clément Le Gall, the instigator and photographer on this project, Amélien Foures, a keen young man who never complains and seemingly did not notice the time at which he was hucking all week, Luc Mazière on camera duties and myself. Based on our first mission, the daily meet up time would be around 5:45 am.
So day one the alarm goes off at five, I’m out of the house half an hour later and on my way to the water mirror, a spot with its defining feature being a set of stairs (as in that’s literally all there is to skate). So not a particularly smart move for our first sunrise session… Of course given the excitement and motivation that comes with it being the first day, we all completely forgot that it was still dark outside and one after the other proceeded to repeatedly hurl ourselves down these stairs, completely oblivious to the potential consequences this might have on our bodies. The rest of the morning unfolded without any hiccups and everyone headed home happy to have made it through these few hours whilst even managing to have a relatively good time. 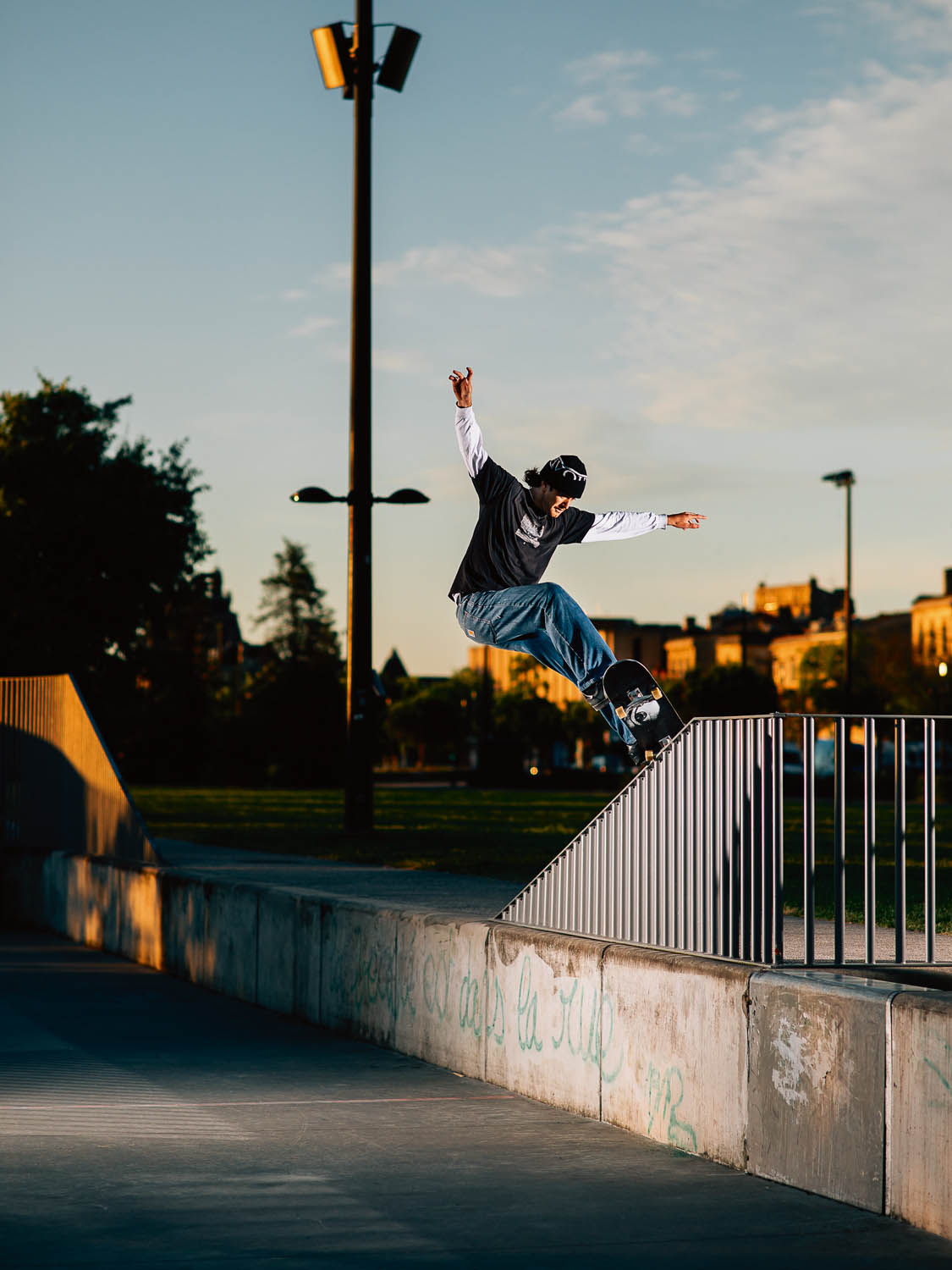 It did not take my body very long to feel the repercussions of that early morning stair session.
One thing that I’ve learnt about pain is that it can truly be multiplied exponentially depending on the time at which it is felt. Try to think back and remember that time when in the middle of the night you kicked your little toe into the pointiest corner of your bedside table as you were scrambling through the darkness desperate for a piss…
Well taking a hang up slam or a primo slam at six in the morning kind of feels like taking two of them back to back at three in the afternoon. Add to that the good old late night kicking of the bedside table syndrome you’re looking at something that becomes A LOT more annoying and frustrating than usual. With all this in mind it’s only natural the morning after those 20 minutes of pointlessly throwing myself down those stairs I’d be experiencing post Tour de France levels of stiffness. 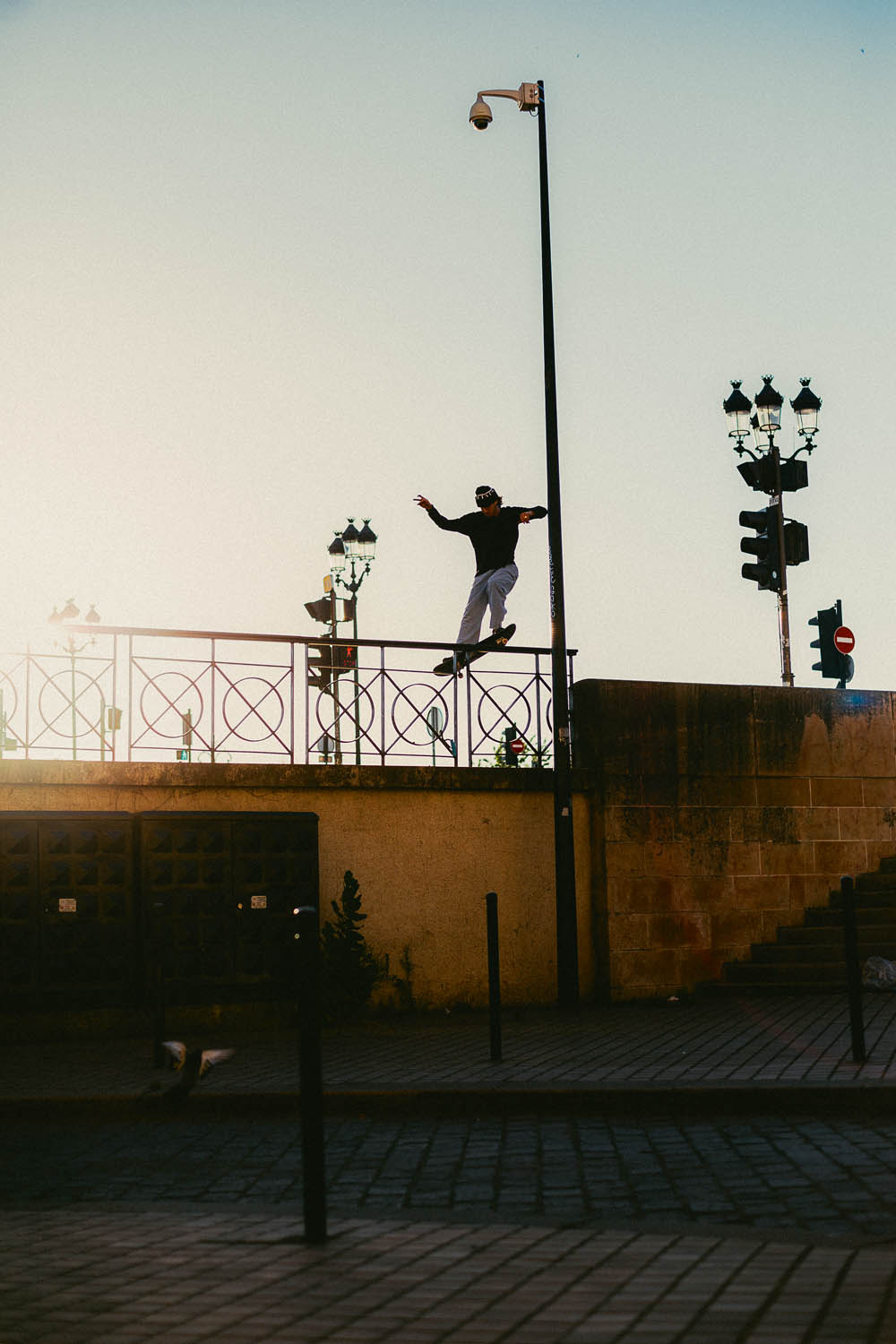 The second day was for me a complete failure that involved giving up and leaving the first spot after only about an hour, followed by an extremely pleasant return to the comfort of my dearly missed bed. I was starting to understand that I might not have what it takes for this project… Skateboarding already being an activity that I find at times extremely painful and traumatising, why add more pain? Admitting defeat is never easy but even harder is committing to this activity when the only real valid reason to be doing it isn’t there: having fun. 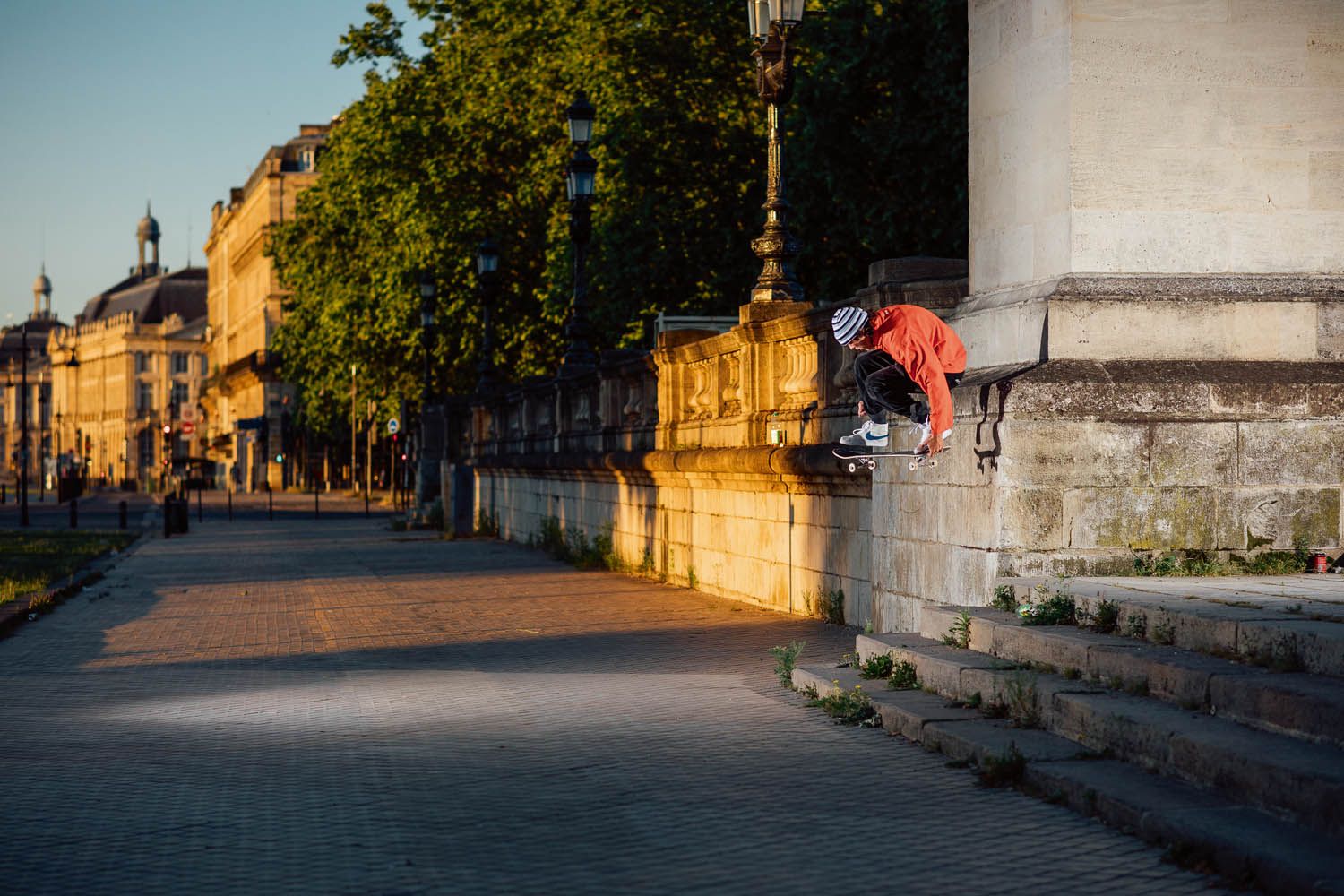 For my third and final day, along with the fear of breaking both my legs skating flat I enjoyed a nice bit of severe hay fever and with it came endless questioning around the purpose of my presence amongst these people… I was also generally just astonished at how well Olivier and Amélien had been skating these last three days without ever complaining or showing any sign of a struggle. All this of course whilst desperately wanting to go back to sleep for a bit before going to work. 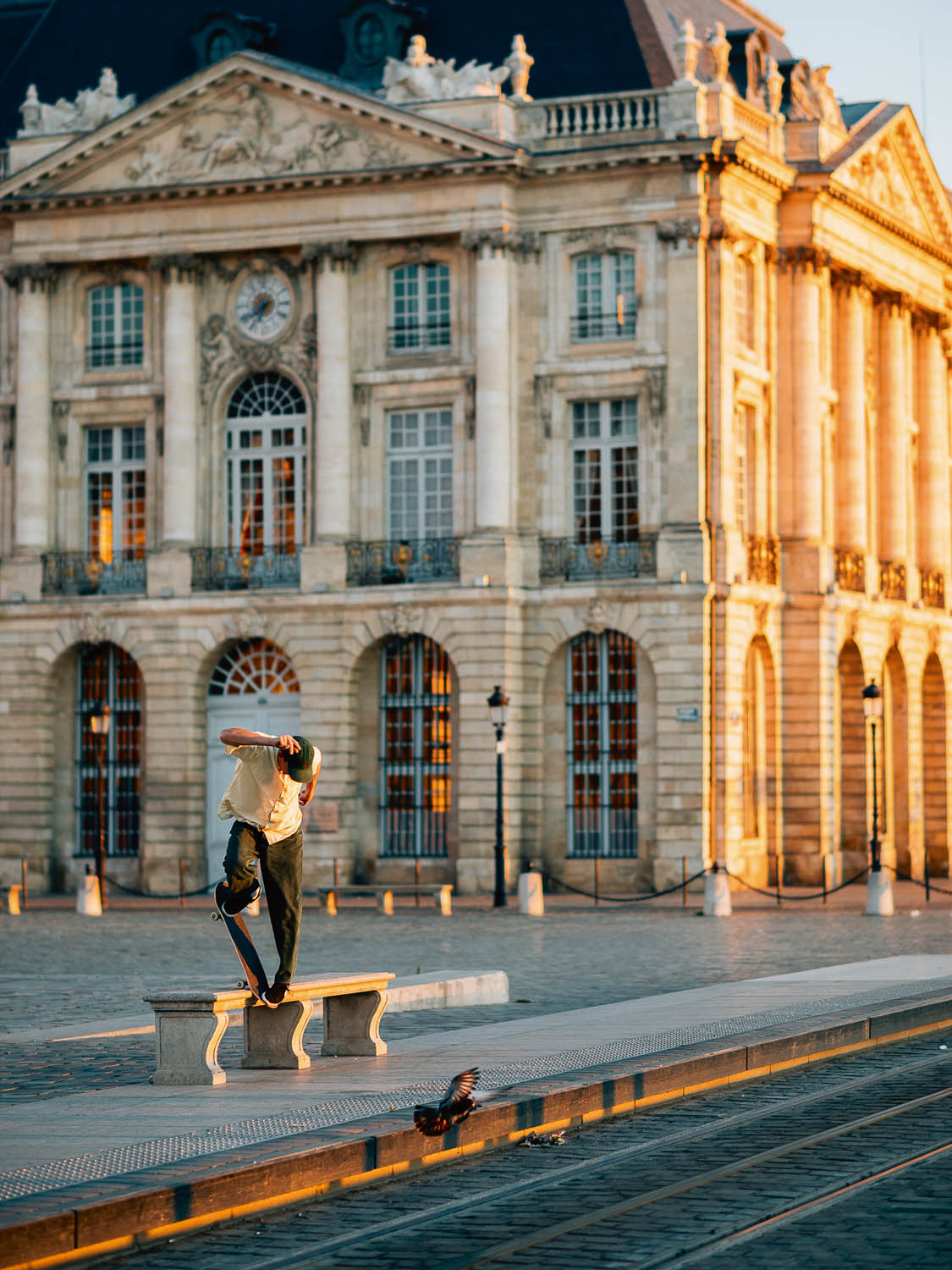 So that’s how, after three days, I decided to quit the adventure; filled with regret and not particularly proud of my performance as a deserter but also so fucking stoked to never ever have to skate that early in the morning again. It was of course hard to come to terms with the fact that I physically just didn’t have it in me but also interesting to realise that my desire and motivation to skateboard had real limits, even if it’s to film for a video and take photos for a magazine. Sometimes your body and your mind come together to very clearly tell you that ‘no, this time you will not succeed and if you keep pushing it will not end well.’ 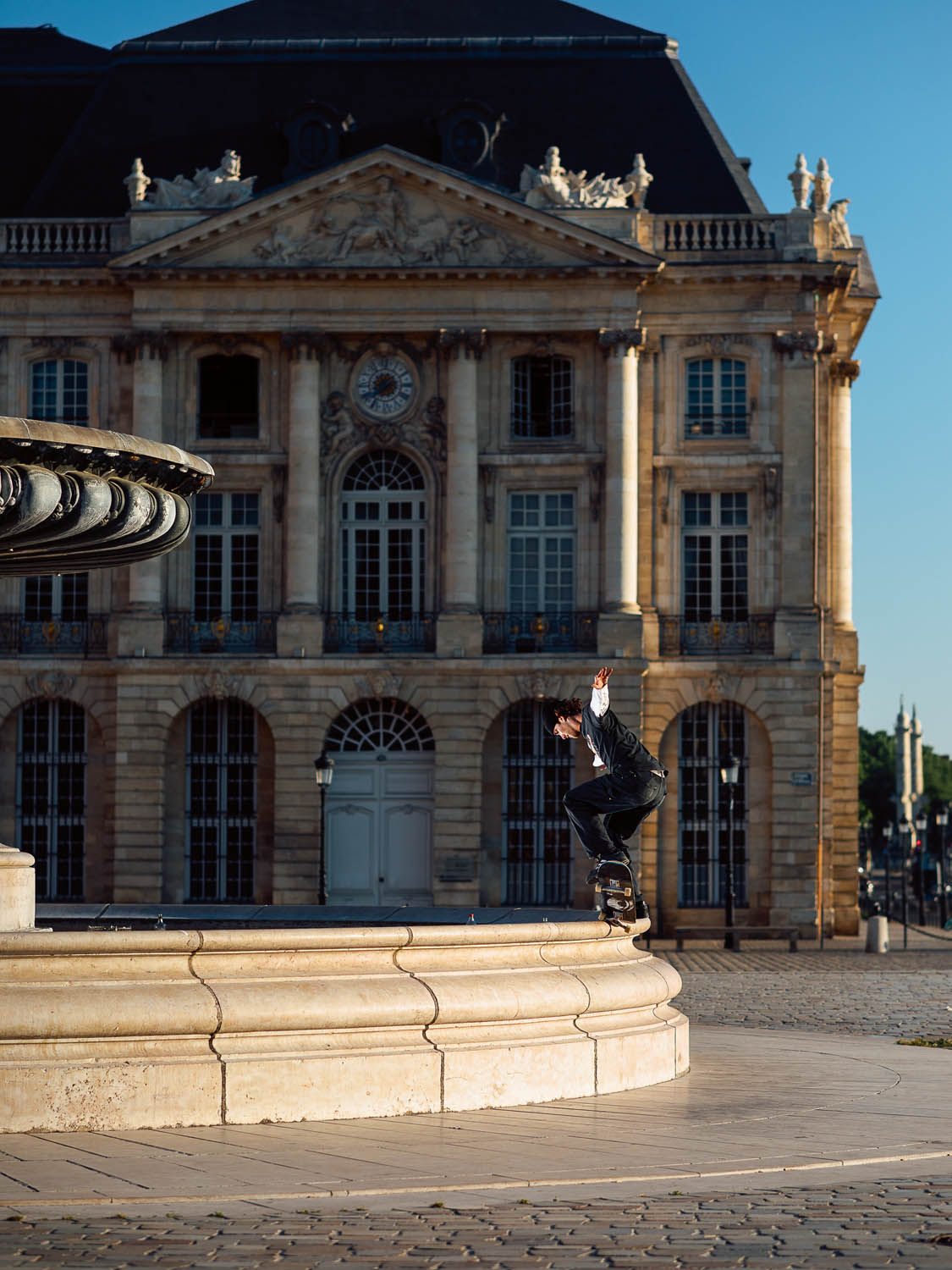 To me the maddest thing about all this is that the bravest of the crew (so obviously not me) even managed to summon enough courage to meet normal people at normal times to skate after their naps… And in some cases they even managed to get some extra afternoon clips and photos! How they managed to finish the week in one piece with enough crack of dawn photos for the article you’re looking at is honestly beyond me. 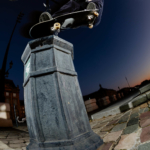 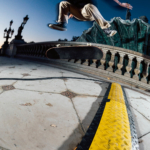 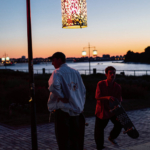 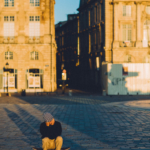