So for those who don’t know who you are yet, you’re the current fourth best skateboarder in the world after Tiago, LC (Ben Lawrie) and Denz (Dom Henry), and now you’re the first person ever to turn pro via Zoom. How does it feel to finally go pro?
(Laughs)
It’s pretty funny to be honest; I guess I’m just kind of shocked. It was like 10pm on a Tuesday night and I was just sitting at home so off it – it was raining and shit. I was just on Photoshop and thinking ‘why the fuck are we having a meeting about a skate video?’ Anyway, I logged on to Zoom and all the friends were on there and they just brought the boards out!

So had you already been sent the boards to your house?
Anthony (Mapstone) dropped them off with my girlfriend that day. She stashed them away so when I joined the Zoom meeting she brought them out. It was all planned out pretty well.

Sorry I couldn’t join the party mate, LC sent me a message fifteen minutes before the meeting with a screenshot of a two page URL to retype and I didn’t even have the app yet, but he couldn’t figure it out either so that makes me feel better.
(Laughs)
That’s alright. It was pretty fun, but I didn’t even have any beers in the fridge or anything to celebrate with! We kind of made up for that last night though, my girlfriend and I hit a few bottles of wine, so I’m feeling pretty fucking rubbish today. But yeah I’m over the moon, stoked!

Well we’ll have a proper party once we’re all released from prison again anyway.
Yeah I can’t wait for that man. 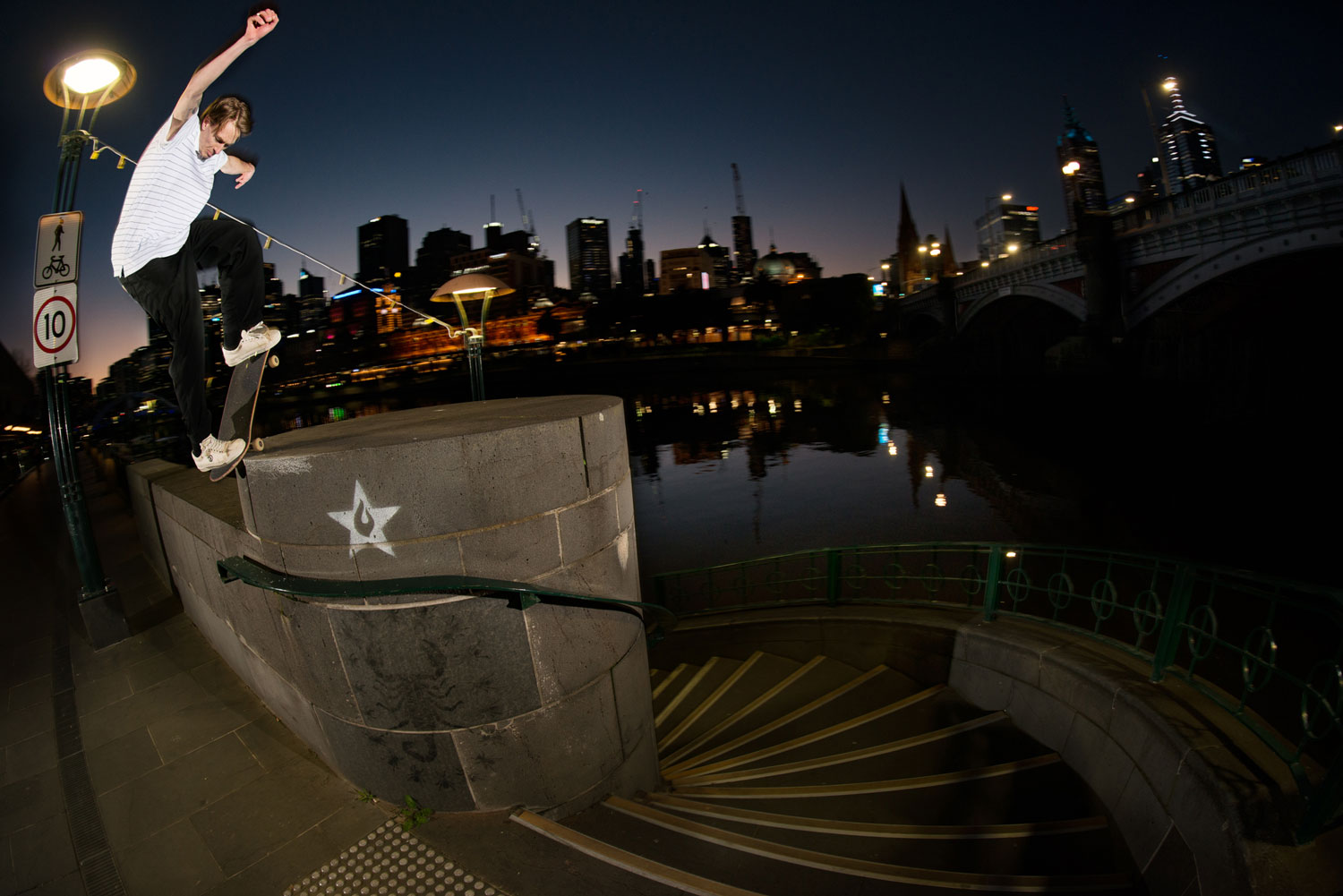 So we’re back in lockdown here in Melbourne at the moment, has that affected your life much, or made it difficult to film your usual ten clips a day?
(Laughs)
Fiddy (Jon Fitzgerald) and I have been going out and trying to film stuff still. In the first lockdown anyway, it’s a bit stricter this time round, but I guess the part is done so we don’t have to go finish that off. I’ve been going out skating every day still for my hour of exercise; I just go to Imax. It’s actually been quite nice to just skate the ledges and hang out there.

So you’re from a pretty extreme family. You’re a pro skater, your brother skates and your sister is a professional snowboarder. Who would you say was the most extreme sibling?
I’d probably have to say my sister. She’s getting a bit older now so I don’t know if snowboarding is slowing down for her or not, but it looks like she’s always out mountain biking now. She lives in the States in Mammoth, so right in the mountains. They catch the ski lift with their bikes then bike down the mountains! I reckon that’s pretty fucking extreme!

Yeah that’s extreme to the bone mate!
Yeah she’s sick man, snowboard wise. She always puts up photos of her doing handplants and shit, and she’s got a real sick style. She hits big rails and stuff and went to the Olympics for slope style, which is jumps and rails. 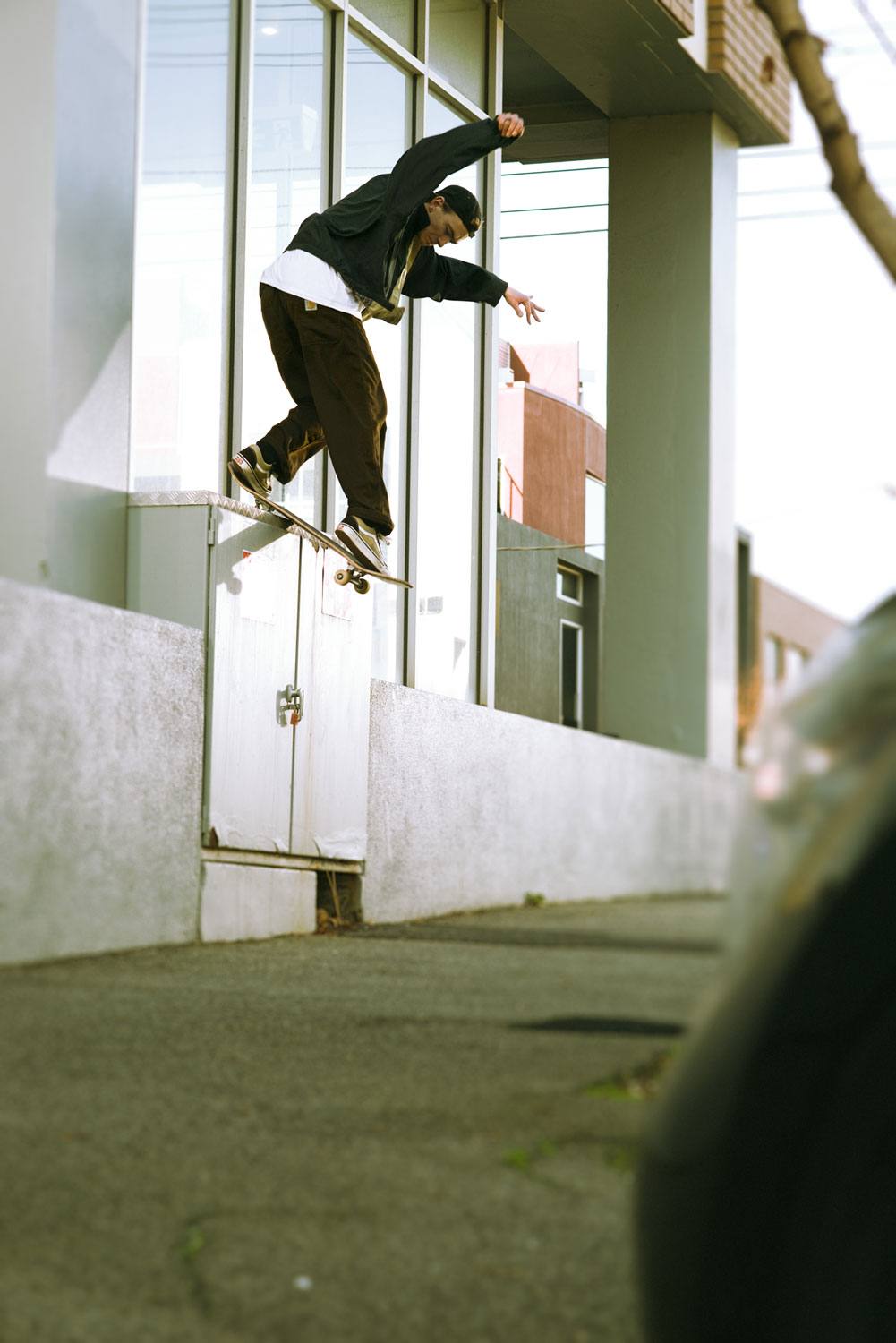 You’ve put out three full parts in as many years; do you have any secrets to your productivity besides being naturally talented?
Ha ha, I was thinking about that actually, I guess just skating a lot! All the projects we’ve filmed over the past few years have just been Fiddy and I, and I think it’s because we’ve got such a good friendship. You know, he’s patient, it takes me forever to land a trick and he’s patient enough to hang in there and give it a go. He’s always keen for my stupid ideas and making the mission to the spot and what not, so I guess I’ve got to give it to him.

Yeah it always helps if the person you film with is one of the people you choose to hang out with anyway. So if anything comes to you there’s always the opportunity to log it.
Exactly, and we spend heaps of time together anyway because he’s such a good mate.

Yeah he’s a lej!
Yeah it’s sick, it’s a good system. If you’re spending hours trying to film a line you slowly start to lose your mind so helps to have someone to joke around with. There’s a line in this new video that took eight hours over three different sessions trying it, then I tried it again after the one that’s in the video and rolled my ankle, ha ha, but yeah I’m hyped on the line.

So you’re originally from New Zealand?
Yeah, I’m from Wanaka, down south deep in the mountains, it’s probably the most beautiful town in the world. It’s an hour away from Queenstown. There’s a huge lake surrounded by mountains that are snow capped in the winter. Stunning.

You’ve been living in Melbourne, Australia for a while now but I know you’ve spent some time in Europe. What do you think of it over there? Would you like to try living anywhere else in the future?
I’ve always thought about doing the two-year London thing.

What’s that, like a working holiday?
Yeah I think as a Kiwi we can go over there and work for two years. But at the same time I like to spend the summer time here, work full time then go away for three months or so over the winter while it’s so shithouse! I really like doing that, and that’s what I’ve done twice before and I loved it; it’s so much fun! Just skating in the UK then France is like an hour away, and it’s so easy to get to Spain and just travel around those sick countries. So yeah I guess I’d love to do a stint over there.

Yeah I guess the dream is to just avoid the winter everywhere isn’t it.
Yeah for now that’s probably my best plan, park up here, work over summertime, fuck off on holiday over winter then come back.

You enjoy it here then?
I like it here! It’s home, for now.

The last couple of years have been tough for the skateboarding community, tragically losing legends all over the world. Melbourne is no exception with the passing of two of its dearest Keegan (Walker) and Tully (West). How do you think this has affected the Melbourne skate scene?
Yeah it’s been a tough 12 months. It’s never easy when someone passes let alone two good friends. I think in a way it’s brought everyone together though. Whilst Tully was sick there was so much support for him, art shows, prems and events where all profits were donated towards his medical bills. Keegan was the boss man at Hoddle (Melbourne based board company) and it’s awesome to see the boys keep that dream alive, running and pumping out new ranges. They’re both such special pieces of the Melbourne skate scene and left behind only the best legacies. 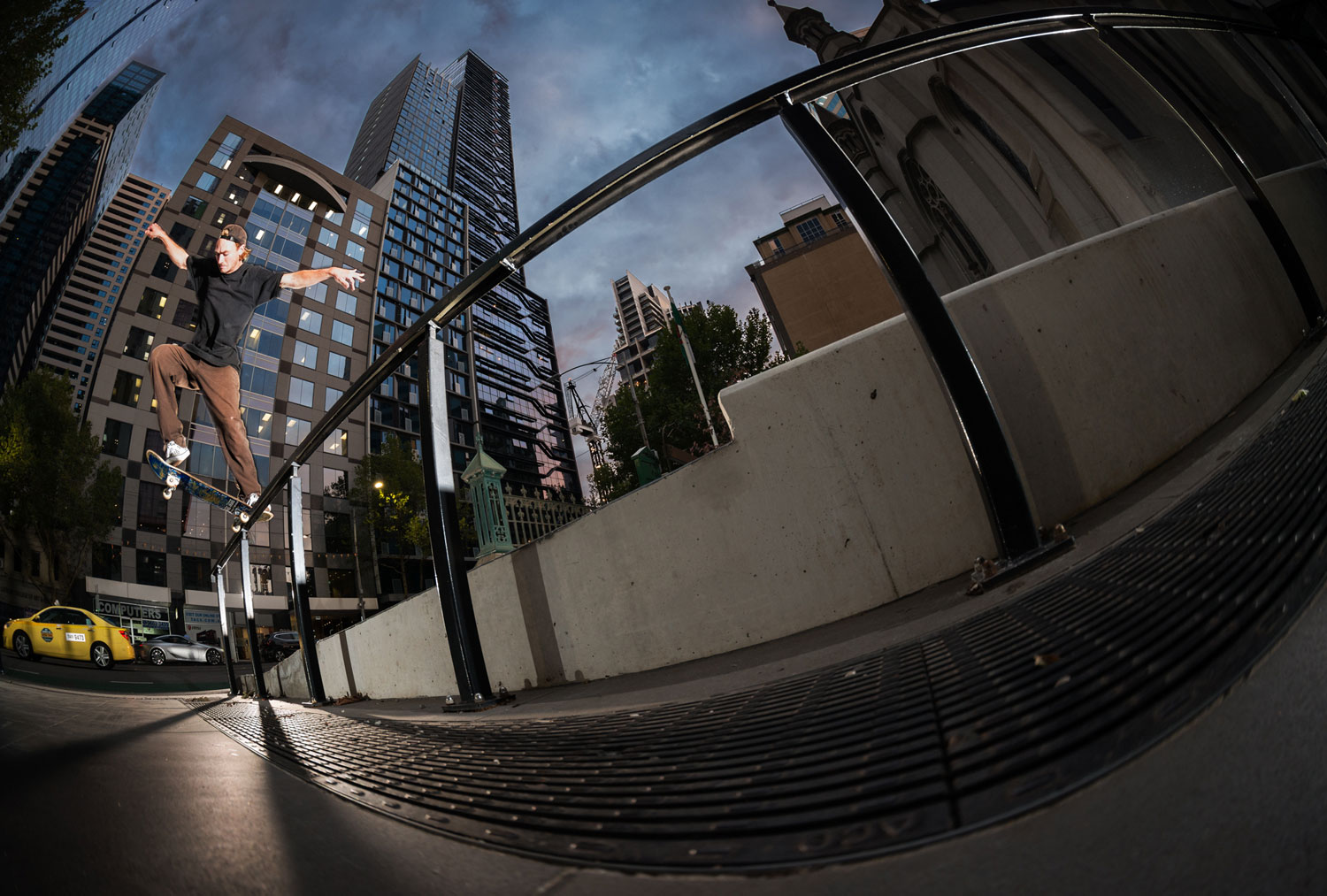 Finally, I was told you were born on an aeroplane? Is there any other mental facts about yourself you would like to share with us before we wrap it up?
Ha ha, I can tell you the story about that one! So my mum was flown on an emergency Cessna plane, which is one of those tiny planes. It was a six-seater and only had the pilot and a doctor with her. She was being taken to an emergency hospital to get me cut out of her stomach because there was something going wrong, but I was a bit premature so I came out mid-flight!

Was it because she lived in a super mountainous area that she had to be flown out?
Well that’s what I really don’t get, my mum said they just needed to get us to the hospital quickly and the one in our town only had one doctor or something. It’s funny because the pilot actually promised my mum that I could have some flying lessons when I was old enough, so when I was sixteen I actually went to the airport and was like, ‘Right, keen to get amongst this now’, and they were just like sorry he was just having you on!
(Laughs)