What is Dorkzone? A couple of years back I had the pleasure of pitching a video project to the head honchos at Malmö’s mighty Bryggeriet skate organisation. Mike O’Shea and myself had come up with a plan for a very silly video with talking ramps called ‘Dorkzone’, and while I was nervously fumbling through what we’d like to do (and feeling the cold steely gazes from poker faces of the assembled dons), I remembered I’d brought along a very crude visual prop to aid my presentation; a piece of pink card with bricks drawn on it and a pair of eyes cut out. I’d inserted a yellow strip of card behind it with two eyeballs drawn on to it so the eyes could move, kind of like a shite birthday card. I held it up and moved the eyes and made some stupid noises and said, ‘Yeah, y’know, bzzz bzzzz, Dorkzone! Talking ramps.’ 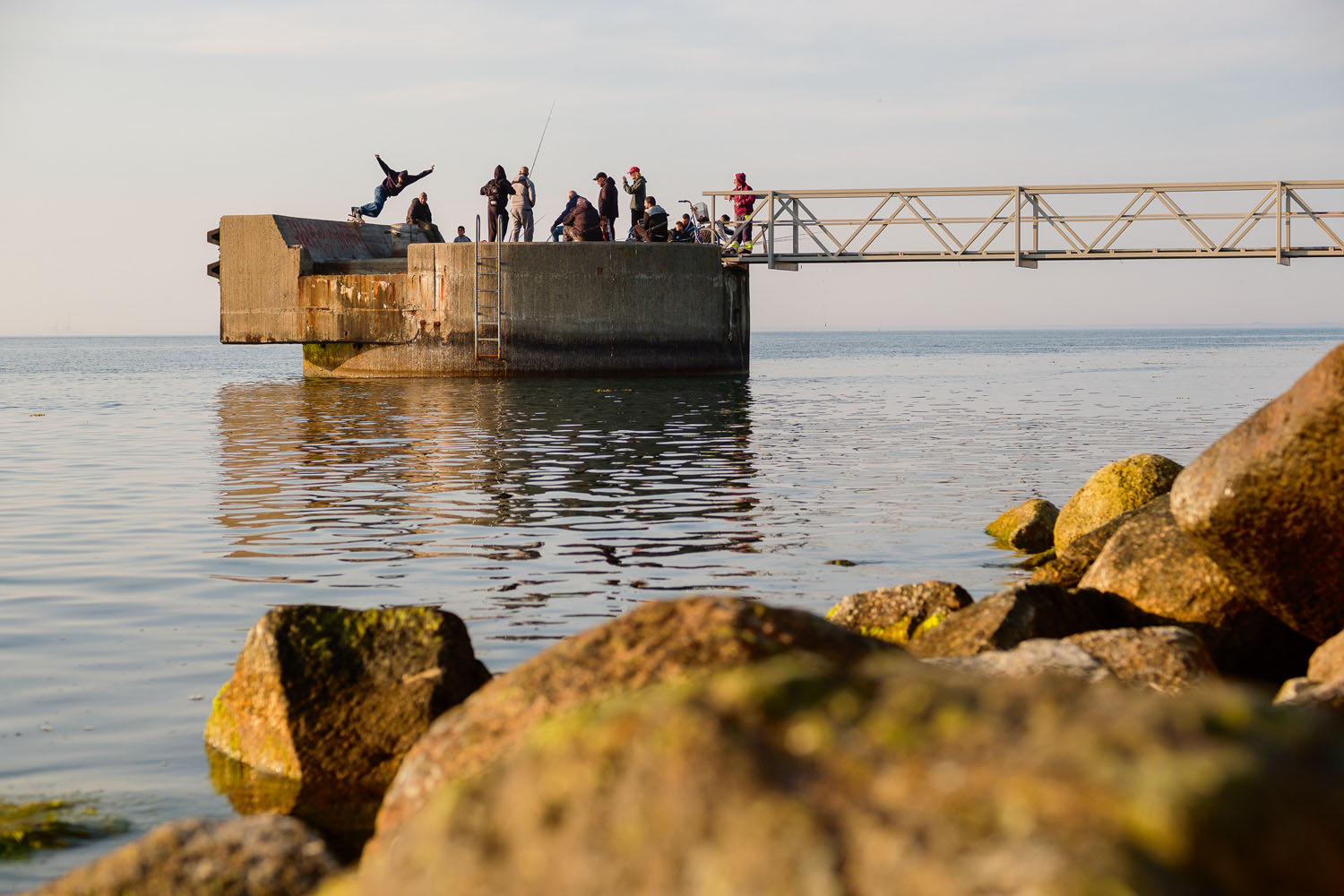 Perhaps the crude stupidity of it worked? Or maybe it was the bribery cake I’d brought but I already knew this was an initiative that Nils Svensson (one of the aforementioned steely eyed bossmen) had wanted to do for years; as he said one day whilst staring into the Oresund sunset with his hand on his heart and with tears running down his perfectly formed cheekbones ‘​I have a vision… A vision to create a department of Bryggeriet that focuses on skate culture to give anyone interested in skating a new access point beyond skateparks and competitions. A vision for the children; a vision for all.​’

The project got the thumbs up so we were able to draft in the talented whiny voiced Englishman Mike O’Shea, whose country had conveniently just voted to sink itself or some such like. So he packed up a bindle with some crayons and sailed over to Malmö in a pea-green boat. With his pint sized missus Anna navigating by the stars in the summer night sky they soon made their way to shore and the team was now assembled. 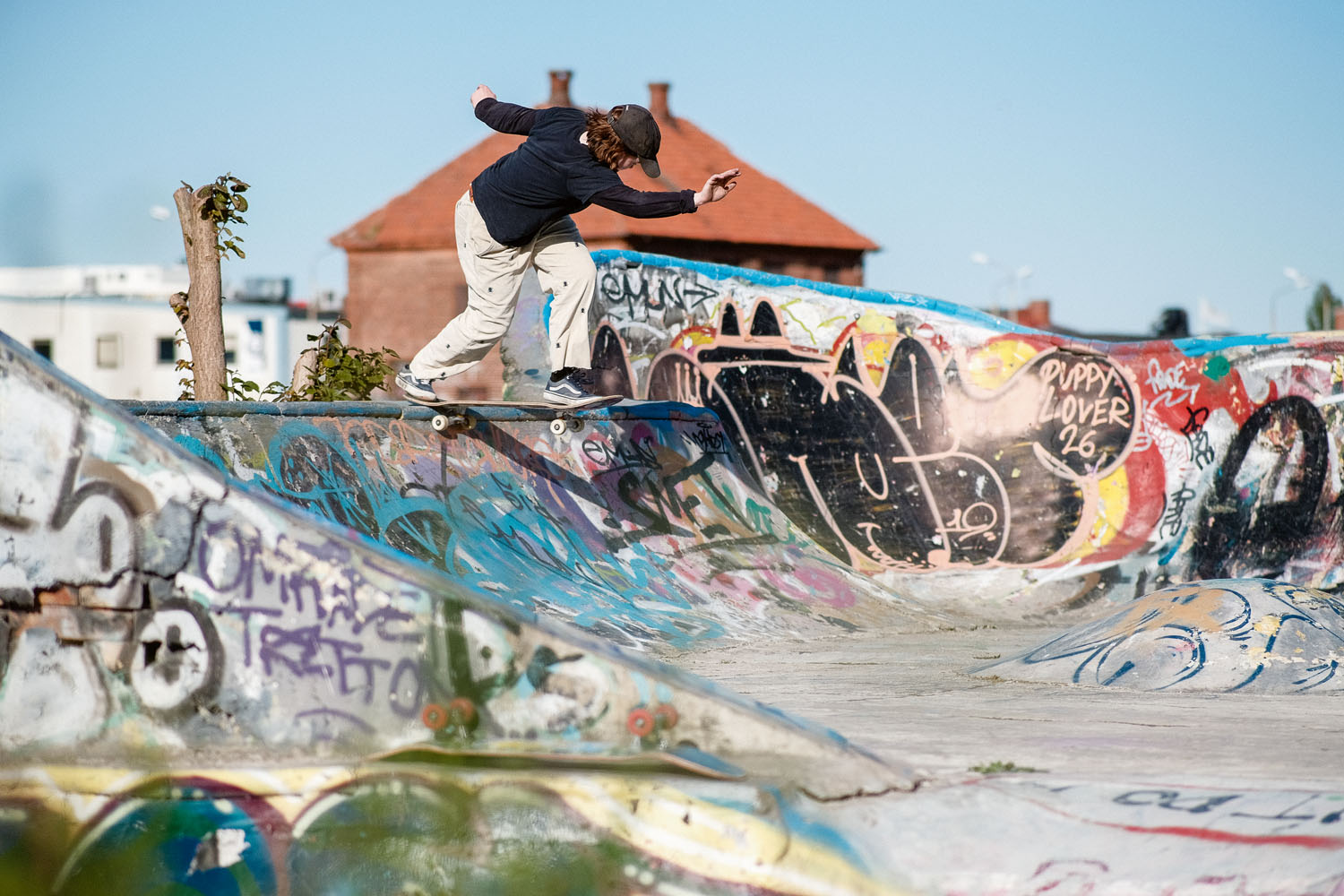 The plan was laid out: we would work on a dorky video with skating and Mike’s props and animations, we would then show that video to kids in schools around Malmö and hopefully inspire them to get involved, like Michele Pfeiffer in Dangerous Minds but with skateboards. With the help of Gustav Eden and his mates at City Hall we have since been able to host a series of art and animation workshops in some of Malmö’s less privileged quarters… And the kids love it! Just like the Wu-Tang Clan, Dorkzone is for the children.

To make things a little more spicy and a lot more rad we enlisted the original plankboard talents of Luleå’s siblings Amandus & Sondre Mortensen, besties Mimmi Leckius & Moa Zander, a manga loving ripper called Gabbe Viking, Penny the dog and a whole host of friends who all bring something creative to the table. In a short time Dorkzone has evolved into being greater than the sum of its parts, with folks getting involved with producing workshops, books, boards, clothes, zines, cassette tape soundtracks, videos, gigantic murals but unfortunately we have yet to make any pogs. 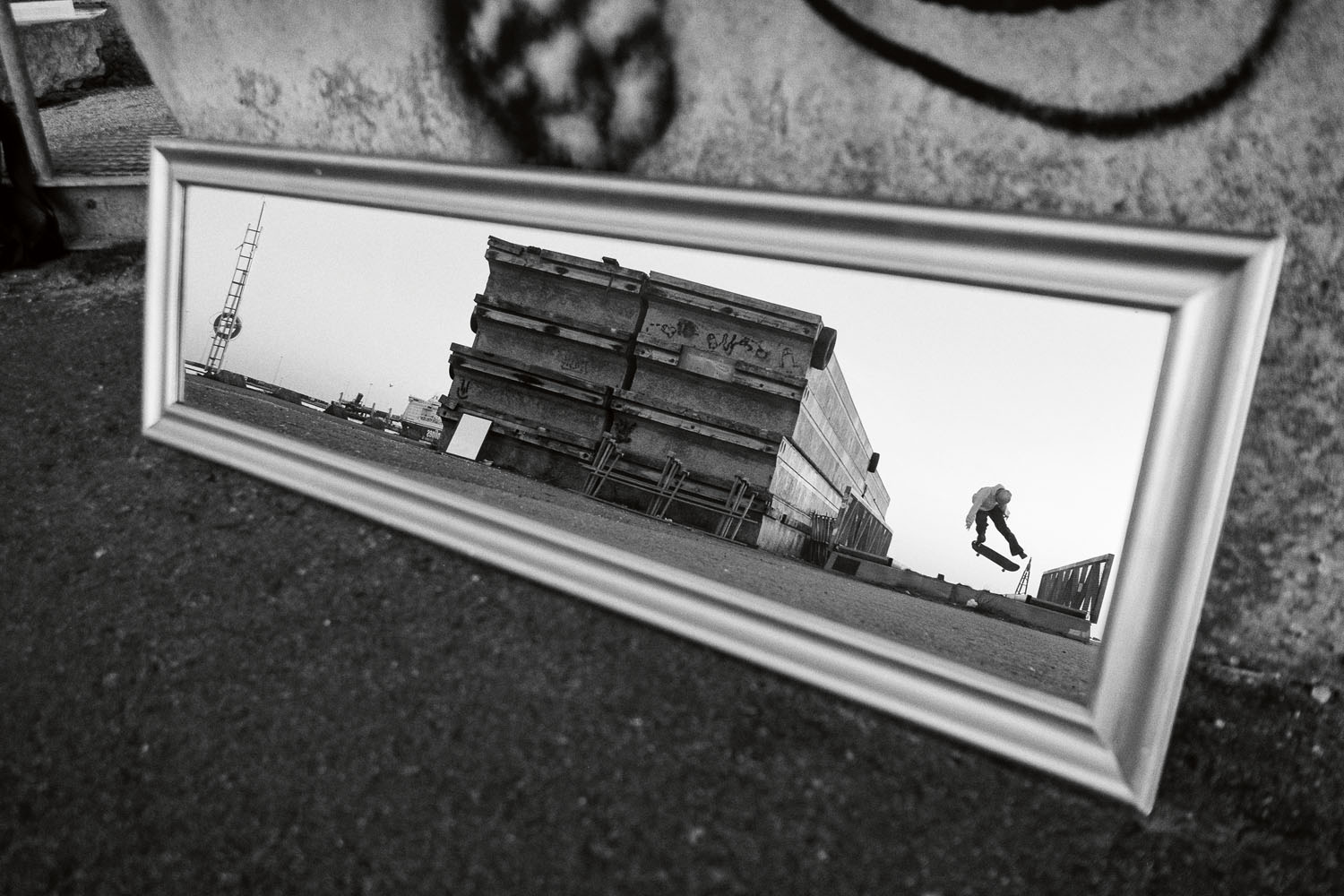 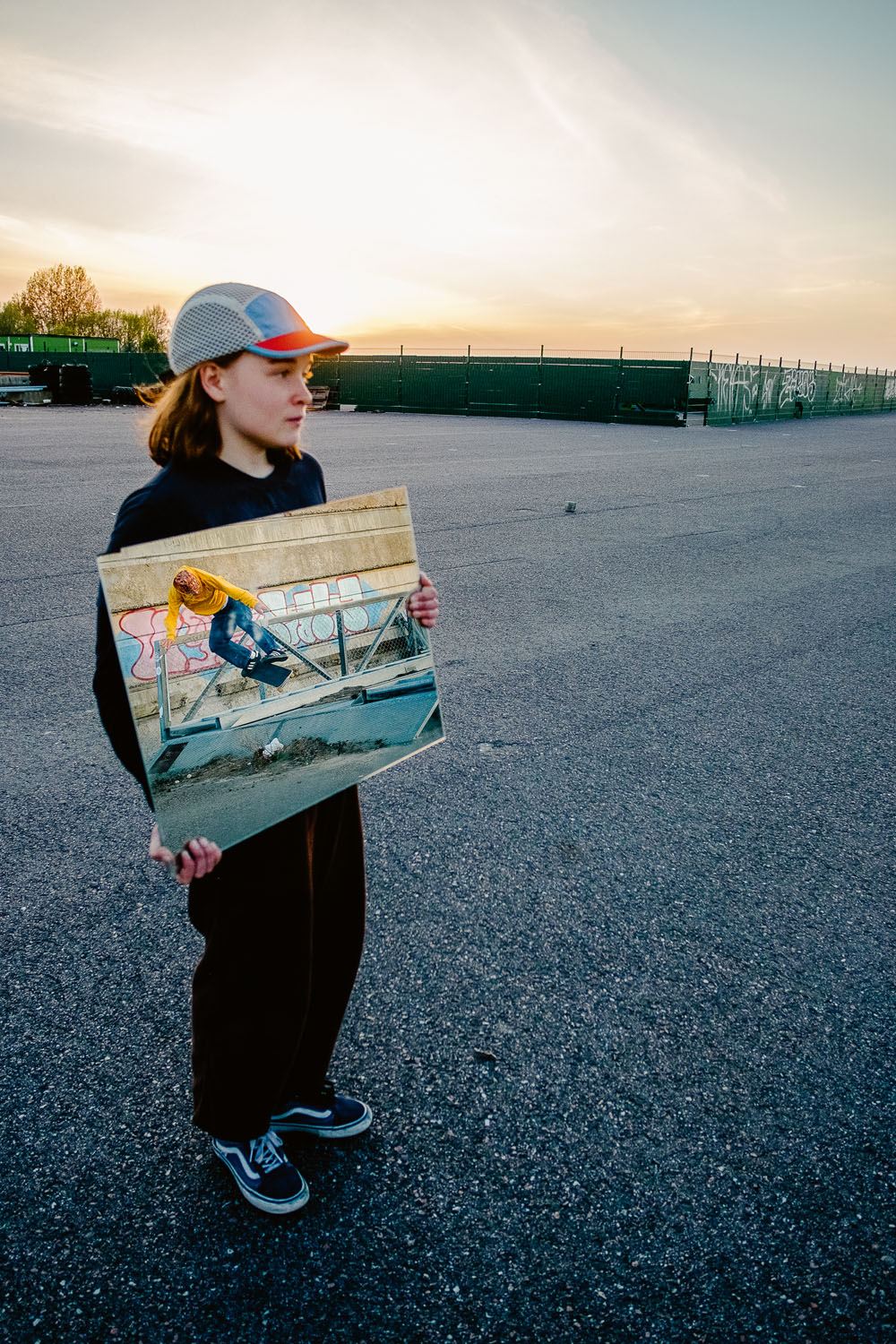 Moa with mirror and Sondre with kickflip

So how did we get to the current video project ‘Darkzone’? We realised through the workshops that most kids don’t like nice stuff that much, well sometimes. Any given workshop can produce anything from love hearts to warzones to dragons to communist propaganda, but the ethos of Dorkzone remains the same. Skateboarding is silly and we’re not really cool, we’re all a bunch of Dorks, and that’s just fine.

‘Heart to Tell’ from the Darkzone O.S.T.
Sondre lyrics:

So Mike, we’re standing in Apelgårdskolan in Malmö, what are we doing here?
We are painting on a playground floor, we’re doing an adventure track for the kids to play on and navigate through the schoolyard from one building to another. The kids in the school came up with a bunch of drawings and I interpreted it for the floor. We also painted a bowl that Bryggeriet Construction built in the school a few months ago and they were stoked on that so they asked us to come back and do more.

How does this all relate back to Dorkzone?
When we make a video or book or whatever we show it at different schools and then do workshops so the kids can get involved and make their own skate graphics and animations and stuff. The goal is to facilitate their ideas and show them that there’s lots of ways beyond skating to get involved in the skate world – although we do skate coaching too. There’s a community outreach aspect to this too as a lot of these areas are troubled and have a lot of crime so we try to engage the kids with workshops and skating.

A lot of the kids here were very curious so I’m going to ask some of their questions: Why are you painting?
Because I want to make a nice bright colourful playground for you to play on.

How did you get good at drawing?
Lots of practice! I started when I was a little kid and I never stopped. You just keep drawing every day. 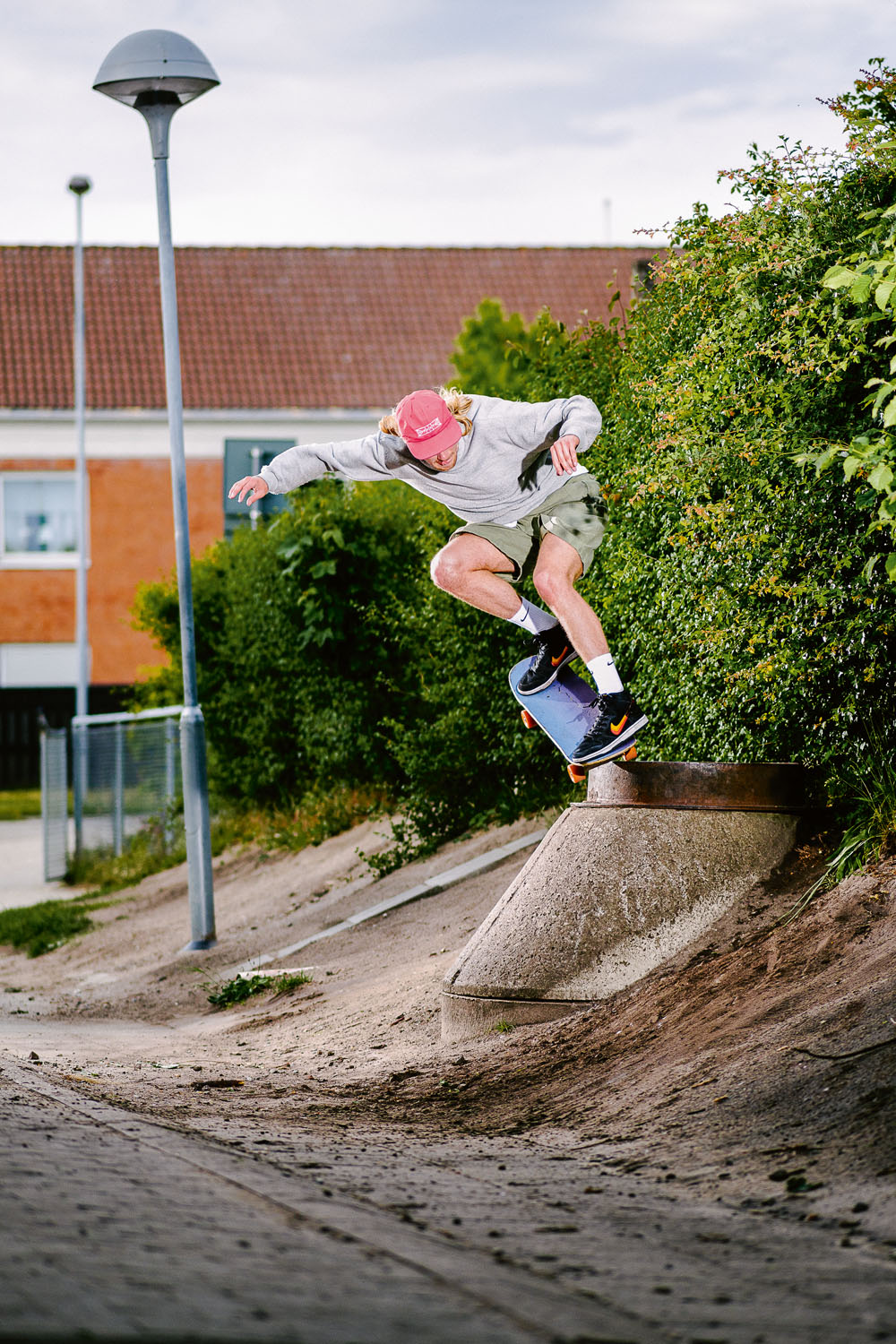 I can’t draw. How do I draw well?
Lots of practice! Or money. Pay someone to teach you.

Back to grown up questions: Do you prefer to work on assignments or do your own thing?
It’s been nice to do the Dorkzone stuff, as there’s a good mix. Some of it is more for me and the kind of work I want to do and the style I want to do: with the videos, graphics, posters, clothing, etc. With the mural projects it’s more about what the kids want and making things kid friendly so they’re stoked on it, which they have been. They won’t stop running on the paint even when it’s wet – but it’s rad to see them interact with it instantly! 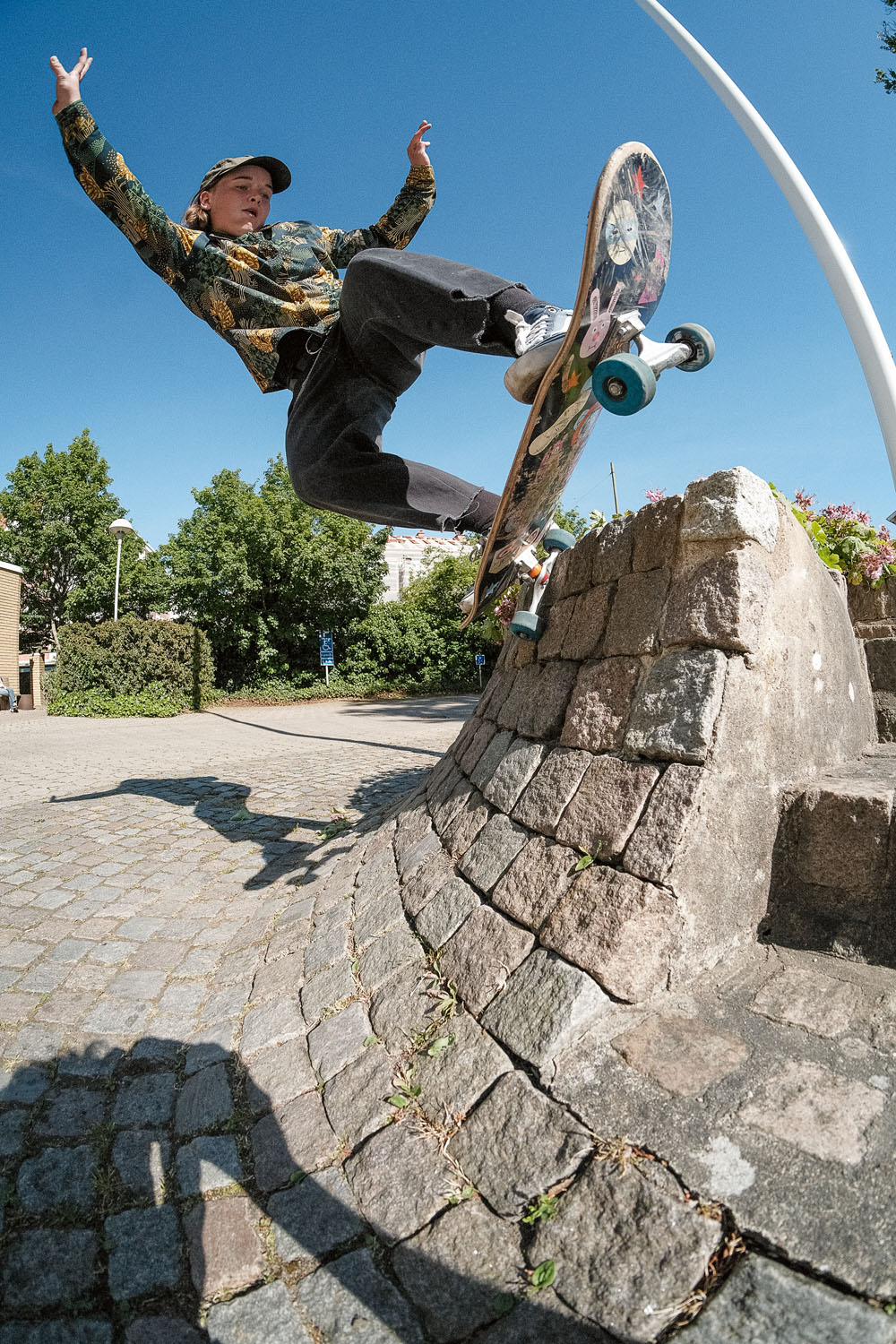 How long can you sit still for?
I can sit still for a long time; I like to lie on my bed eating candy all day.

You’ve provided some pretty dark illustrations for the new video project. Some weird evil cats shooting rabbits… Where does this come from? Have you always had an interest in drawing?
When I was little I saw a rabbit with a gun in the forest in my hometown Sundsvall. He was aiming at my neighbour’s cat. I ran, I heard a gunshot. I never saw that cat again. Now I’m trying to overcome my fear of rabbits.

Does your mood change when it gets dark or are you permanently in the Darkzone?
I don’t know if my mood changes when it gets dark. When it gets dark I run around screaming in my room, because I am woken up every night by rabbits from the Darkzone that have come to visit me. I don’t know what they want from me, they just stare at me. Since this first happened I’m sleeping with a sword I bought in Sundsvall under my pillow if the rabbits would come armed one night. It’s good that this almost only happens at night.

You were recently working with Bryggeriet Construction grinding the surfaces off skateparks to make them all shiny and new, how’d that go?
It went good; it was nice to learn. But my fingers still feel a bit weird. 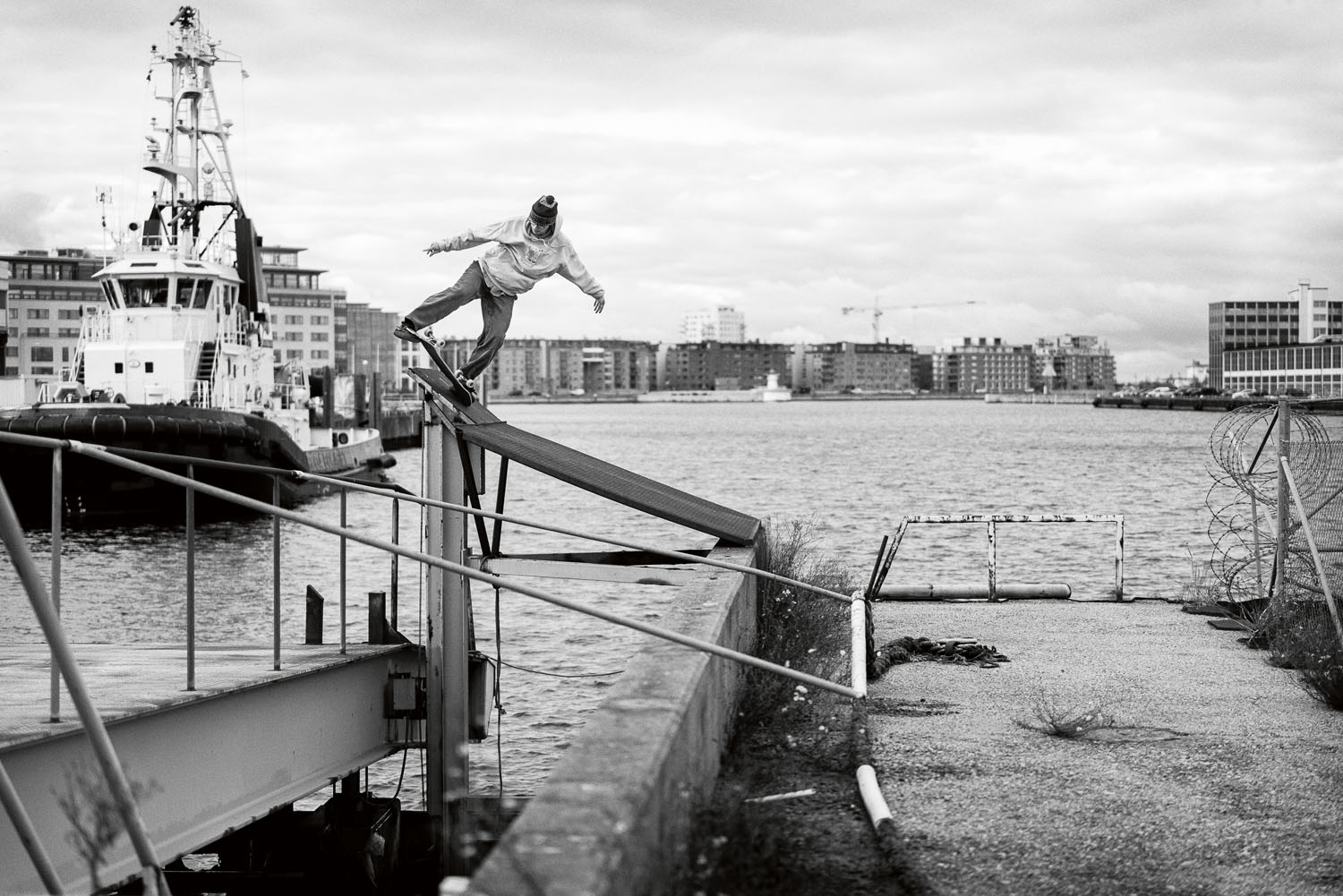 If you’re riding a pony you are where you want to be, so you let the world come to you. You don’t seem like a fella who is in much of a hurry. Is this the key to the cowboy way of thinking? What does it feel like when you’re in this mind frame?
The world spins. It’ll come your way, so just keep on truckin’ like that cowboy you be! And while you’re truckin’ along, why hurry? Isn’t that the moment when things start to become hard, weird, stressful and makes you turn up late plus having a lot of stuff on your mind? Or maybe I just suck at hurrying?

Your musical influences are quite eclectic. Who have you been vibing on lately?
It’s been all over the board lately. Everything from the Hypnotize Minds catalogue to Saint Etienne, Cola Freak Records, Medvind, Gibbo, John Cale, The Durutti Column…

Sometimes you seem to be chilling at the stable and lately it seems like you’ve been galloping on your pony? Do you think it’s important not to force your creativity, whether it’s music, skating or art?
I think creativity has its own kind of force. So forcing that force just gets really weird for me… But I love skating and I love music and I love a lot of stuff so I’m not gonna stop! It’s way too fun.

We heard your development as a boy was a bit delayed and your right leg grew faster than your left, is this how you can skate with one foot so well? Did it hurt being called pogo boy?
No way! Being a pogo kid is totally badass. Yeah, it’s my medical condition but for what it’s worth it helps me do some kick ass one foots!

You watch a lot of anime and do your own art and illustrations. What’s the darkest anime show that you can recommend?
I do indeed! One of the darkest animes I’ve watched is probably Dorohedoro, actually read the manga first and I recommend it 100%. It’s probably my favourite manga of all time.
Manga are the books you read by the way…
I really love the art style and the characters. It’s one of those shows/manga that really stuck with me. I still think about Dorohedoro to this day. 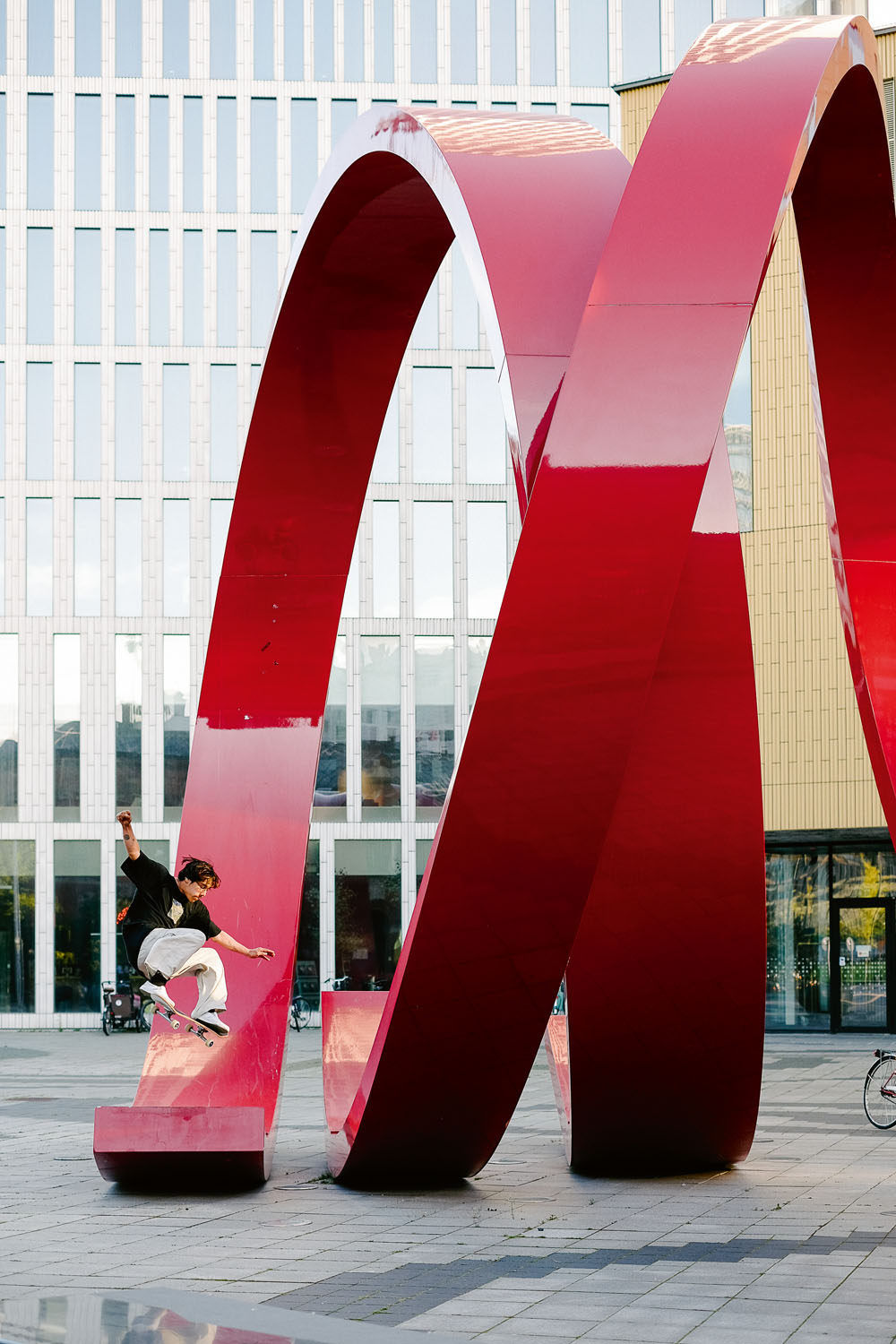 While we were filming for this project you landed a body varial over a gap and Mike messed up the filming so you had to do it again. What happened next and will you forever bear a grudge against Mike for his gross incompetence?
Yeah we kept going because Mike accidentally took a photo instead of filming the trick so I ended up shooting out the board like no tomorrow. Unfortunately Phil couldn’t grab it in time so the sea devoured it 🙁
Phil made a glorious war cry though so it was pretty chill. All in all, a great day!

Anything else you’d like to add Kebabmaster?
Of course! I’d like to give a big shout out to my homies back in Sthlm, Goof Gang and most of all my cat Fluffy. 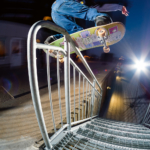 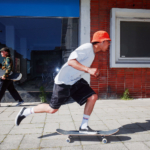 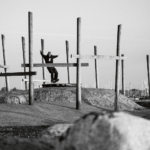 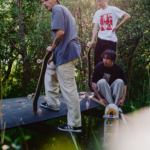