Filmed and Edited by Oskar Ong and Jonas Strecke

Based in Amman, Jordan, 7Hills is a non-profit organisation working to unite local and refugee youth through skateboarding.
Jordan plays host to one of largest refugee populations in the world. Despite over 60% of the country’s population being under 30, there is an immense lack of public spaces and free recreational outlets available.
7Hills’ skatepark provides a secure space for people from all walks of life, occupying a 650 m² area of downtown Amman, delivering skateboarding as a tool to defeat gender, racial, religious and cultural inequalities. 7Hills runs a number of skate classes, including girls only and refugee sessions, providing transportation services from nearby refugee camps and underserved areas of Amman to the skatepark. Every week, the classes see over 200 skaters from Jordan, Syria, Sudan, Somalia, Iraq, Palestine and Yemen come together to break down social, political and cultural barriers through skateboarding.

You can support the 7Hills project HERE. 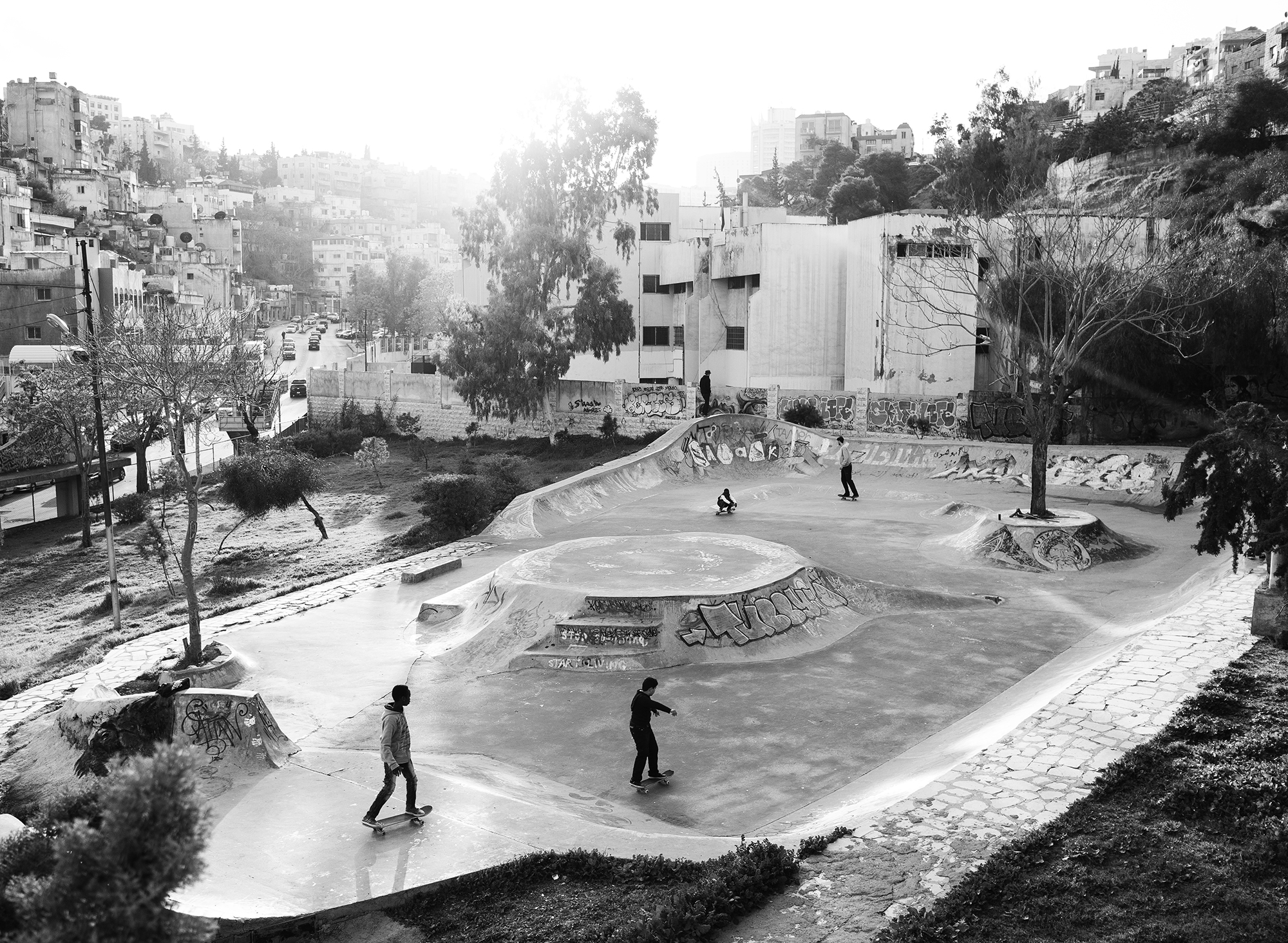 ‘I discovered 7Hills through my mate, Matthias, who volunteered with the programme in 2018. After learning about 7Hills’ progression, Jordan’s rapidly growing skate scene, and the country’s abundance of amazing (mostly untouched) spots, it was a no brainer. The plan to do a skate trip to Jordan was born. In 2019 we reached out to Kas Wauters, who’s been heading up the 7Hills programme in Jordan’s capital city of Amman since 2016, alongside 7Hills founder and Jordan OG, Mohamad Zakaria. The plan started as straightforward as any skate trip; travel to Jordan with a crew of skateboarders from Germany, bring a bunch of boards and equipment to donate to the scene, link up with Kas and the Jordanian locals, discover some new spots, and hopefully come back with some solid footage to make a video.
Fast forward to 2020 and Mathias and I were visiting Jordan for a second time. Testament to the country’s rapidly growing skate scene, the locals we’d hung out and skated with the year before were developing at such an insane rate and skating on a totally new level. Thanks to Instagram, we’d see something new every day from dudes like Hakiem Barakat and it was obvious we needed to get back out there and get some footage that did these dudes justice before we released the video.
We skated Jordan’s two biggest cities, Amman and Aqaba, before venturing into the desert for a nomadic 3-day mission and Bedouin experience. We squeezed 8 Germans into a rental van and hit the road north to the Mars-like Wadi Rum desert. The next day we headed to Petra, where the environment has been utilised by Bedouins who call the desert home.
Our Petra experience got real pretty quickly, with Bedouin hospitality treating us to a hashish and booze fuelled night in a cave where we learned about their indigenous way of life, as well as their seemingly endless capacity for intoxicants… Dealing with land displacement and being awkwardly situated between western tourism and their traditional way of living, the lessons we learned from the Bedouins left us questioning the tour we had booked for the following morning. Wake and bake Bedouin style, and we found ourselves on a wavy donkey tour through the ancient caves of Petra.
For most of the crew, it was a really unexpected journey, especially considering most of us had never visited countries in the vicinity of Jordan. One thing is for sure, there is a lot of prejudice against countries within the middle east. What we tend to learn about the middle east through mainstream media has, for the most part, a negative undertone that focusses predominantly on conflict, terror and oppression. Our trip couldn’t have been further from this fear-mongering propaganda.
Everybody we met throughout our journey was incredibly welcoming, hospitable and humble; traits sacrosanct in Jordanian culture. The video’s name derives from such welcoming hospitality (welcome = ahlan wa sahlan). Towards the end of our first trip, one of the local Amman skaters invited the entire crew, along with Kas and 7Hills’ international volunteers to a dinner in their family home. 15 dirty skate rats sat around a table of the best food we’d eaten throughout our travels, all in the name of Jordanian hospitality!

Ahlan wa sahlan aims to illustrate the loving and warm-hearted people of Jordan, their environment, and their welcoming connection to all that pass through its magical land.’