Interview by Will Harmon
Translated by Sungjoon Yang

First off, how did you get the name Hotminator and what’s your real name?
After being discharged from the army, I wanted to test the limits of human capability. I found out that the hardest exercise a person can do is a marathon, which was self-taught and started to beat myself. I was serious about marathoning, and won lots of trophies at national competitions. I have crazy energy, and the nickname, Hotminator was given by my local skater friend for that. I like that. My real name is Hanmin Lee.

Which one do you want to be called, Hotminator or Hanmin Lee?
Hotminator. I actually wanna change my legal name to Hotminator, haha. Maybe that’s not necessary, since everybody already knows me as Hotmintor.

I’ve heard you’re trained in Martial Arts, how did you get into skateboarding?
I was training as an anti-North Korea Spy, which is a secret agent, and learned Commando Martial Arts, the martial art taught to special forces, practical Taekwondo and murdering techniques as well.
The first skate video I watched was P-Rod’s part in a Nike video when I was in middle school. I idolised Dustin Dollin and did the same curled hair. Skateboarding was dope at its finest to a Korean kid. I went to Sunae spot and started to skate there.

When did you get your first VX1000? Was it the first camera you ever started to film with?
At first, I used the GoPro I used while marathoning. I didn’t know a thing about filming. Then I realized the final look of the GoPro was very different from that of the skate videos I liked, and found out all my favorite skate films were filmed through 6mm camcorders. It was hard to find a VX1000, but VX2000s were everywhere and relatively cheap, like 100 USD. I bought a VX2000 and an Opteka fisheye lens. That was my first decent setup. Around 2015, I finally found a VX1000, and I still mostly use a VX.
There are lots of vintage camera shops in Korea. I happened to find a VX1000 for 30 bucks stuck in the corner in one of those. It had a battery problem, which I fixed watching a YouTube video. After that I bought a MK1 lens, which has been my main setup. Since then, I dig for VXs every day.

You quite possibly have the biggest VX collection in the world, how did you acquire all of these, and what percentage of them actually work?
I may happen to have the biggest VX1000 collection, but the mission was never the collection. VXs break down so easily, I’ve collected them for parts. Now I’ve got more than 80 VXs. 50 are working, and 30 are not.
I check vintage camera shops weekly on and off-line, visit online secondhand markets daily as well. I’ve left my number in every vintage camera shop, so when they have one they call me, which happens a lot of the time. Old shop owners used to ask me why I collect these ‘old useless camcorders’, and I’d just tell them I have a VX fetish, haha.
I think I cleaned out all the VXs in Korea, so when I have the money I buy some from Japanese auctions. In Japan, VXs are cheaper than the US, but the downside is the shipping costs. In Korea, they are so cheap. Once I bought a working condition mint VX1000 for 20 USD. One time one owner just gave me a working VX for free, saying it was useless. Another time, I got up to 10 VXs in a month. 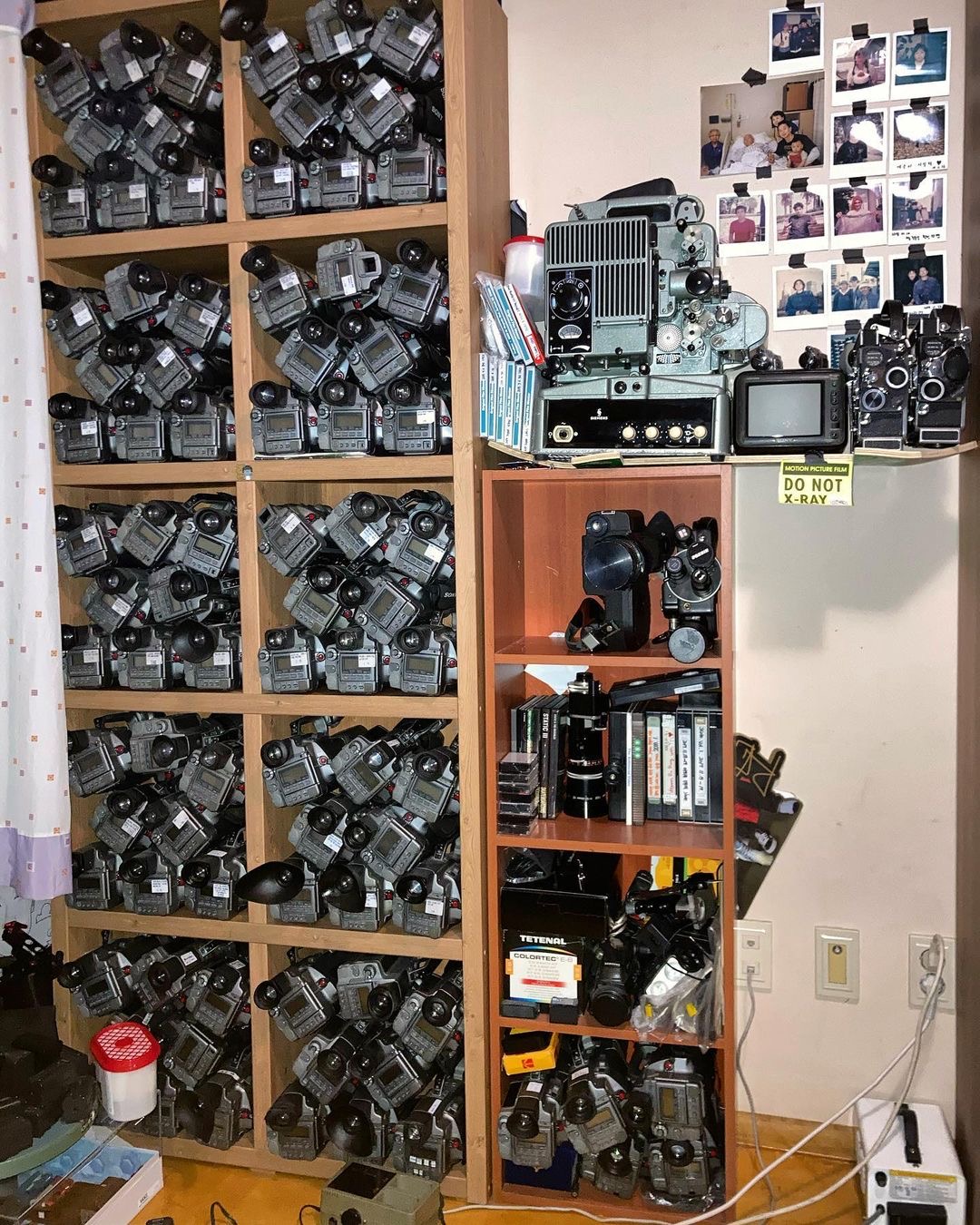 Why do you love the VX1000 so much and why did you decide to stockpile them?
All of my favourite videos were filmed with the VX1000. With VX, I can use my arm very actively, putting my VX deep into the angle. Of course, I broke lots of lenses doing that, haha. HD camcorders make me feel like I need to keep distance from a skater. It doesn’t mean I hate HD; I also own a HPX, too. Depending on the situation, I use HD for commercial projects, and VX for personal ones. As I said before, I just collect them to change parts, since they are so vulnerable.

Do you fix them as well? Would you ever sell any of yours?
Actually, I only use one particular VX. When it breaks down, I fix it with parts from the rest of the VXs. The reason I keep using the same one is that I set the vignetting of the four corners of the MK1 to be exactly the same, so that one doesn’t tilt to any other side. This is a hard task to accomplish. My VX breaks down like seven times a year, which means I fix it seven times a year.
Although I didn’t collect VXs to sell, when my homies need one, I give one for the same price I paid for. Zach Chamberlin personally came to my place, and bought one. I wanted to give it to him out of respect, but he gave me money. Sometimes I will sell to someone who is not my friend, but serious about skate filming. But I’ve never made a profit out of it. It’s rather been a loss.

How many MK1 lenses do you think you have?
I’m using two MK1 lenses now, and have broken 4. It’s a shame they don’t manufacture them anymore. When a board flies into the lens and is about to hit it, I can see it in slow motion and do not fail to protect it now while keeping the skater close. I think I got influenced by the fact that my favorite filmers don’t use a scratched lens.

South Korean males need to do a bit of compulsory military service (18 months mandatory for all healthy men), and Tom Delion told me that you excelled in yours and that you could have possibly had quite a successful career in the military… Why did you decide to give that up? (and what do you do now to make money?)
After serving 22 months of regular military service, I was trained as an anti-North Korea spy. It was confidential so I couldn’t talk about it with anyone. Not, even my family. However, somehow my mom found out and of course, freaked out. She earnestly asked the commander to get me out of the unit constantly. I was first place in the training camp but was eventually discharged.
Now I make money in various ways. Teaching kids how to skate, making commercial videos, filming skate videos, and help maintain my mom’s building.

How long have you been filming and making edits in Seoul?
Not that long. About six years now. I put my marathon energy into my skate filming. I’ve never burned out before a skater. Even if a skater keeps saying ‘one last try’, I don’t mind, haha.

How’d did you meet Jasper, Daryl and Tom?
Jasper loves to skate the streets of Korea and visits often. Through Hoon Lee I got to meet him and naturally hung out together. Through the NocturnUp project I met Tom and Daryl and became friends. We filmed with no stress and had a really good time.

You told me that this was originally planned to be a bigger edit, can you tell me what happened?
We were supposed to meet up in Thailand in March, 2020 and film some more clips for this project, but due to Covid-19 it was cancelled. We kinda accepted the fact that we couldn’t get together in the near future. But it’s all good, I like what we did so far.

What do you have planned for 2021?
Because of Covid-19, my friends abroad cannot visit Korea. After Covid-19, I wanna go abroad and visit my friends and skate together. I want to go SF and see my Loophole Wheels homies, and Europe, too. I’ve never been there.
Even though I love the VX1000, I want to make a full-length HD video, too. My taste seems to keep on changing. At some point, I started to watch and enjoy a lot of HD videos, and understood why they threw out the VX1000 and grabbed a HD camcorder. Am I affected by the trends, too? Is it because Dollin is being filmed HD lately? Haha. I have no idea, either.