“My first recollection of Waso was as a malnourished street kid who didn’t own any shoes. He stood nervously at the entrance of the skatepark with a sack full of empty cans in one hand. One glance at him and you could tell right away he had been dealt a tough hand.

He had this mesmerised look on his face as he watched other children laughing and playing together as they whizzed around on their skateboards. Perhaps too intimidated by the joyous commotion inside the skatepark, it wasn’t until after a few visits that Waso plucked up the courage to try skating for the first time. Whatever troubles he was dealing with outside the skatepark that day, they seemed to melt away with that first push and, for a short while, he was free to be a kid.

But then he stopped coming. We just assumed that life had gotten in the way, as it does for so many children in Myanmar, and that we wouldn’t see him again. It wasn’t until one day many months later that he randomly showed up again. This time he stuck around. As Waso slowly became a regular over the years that followed we would get glimpses into his life outside the safety of the skatepark.

This film is an attempt to portray Waso’s early teenage years and to celebrate the positive impact skateboarding and the community at the skatepark has had in helping to steer him in a positive direction.

If you would like to make a financial contribution to Pushing Myanmar and directly support beneficiaries of our programs, such as Waso, you can make donations through a newly launched PayPal page at here. We thank you in advance for your support.” – Ali Drummond

Interview and translation by Ali Drummond

Let’s talk a little bit about the film. How was the process of making it?
It was a super exciting experience for me, but I remember some scenes were difficult to film. The intro scene by the pagoda took a long time. They filmed it sitting on the back of a taxi with the boot open while I skated in front of the camera. It was difficult to get the timing right. I got the opportunity to film in many different places and film street skating downtown. The security kicked us out of the kicker spot, so we had to go back twice to get that trick there, but it was super fun. I was also a little shy and nervous when we did the interviews. A few of the questions were difficult to answer in detail. I’d never done an interview like that before. 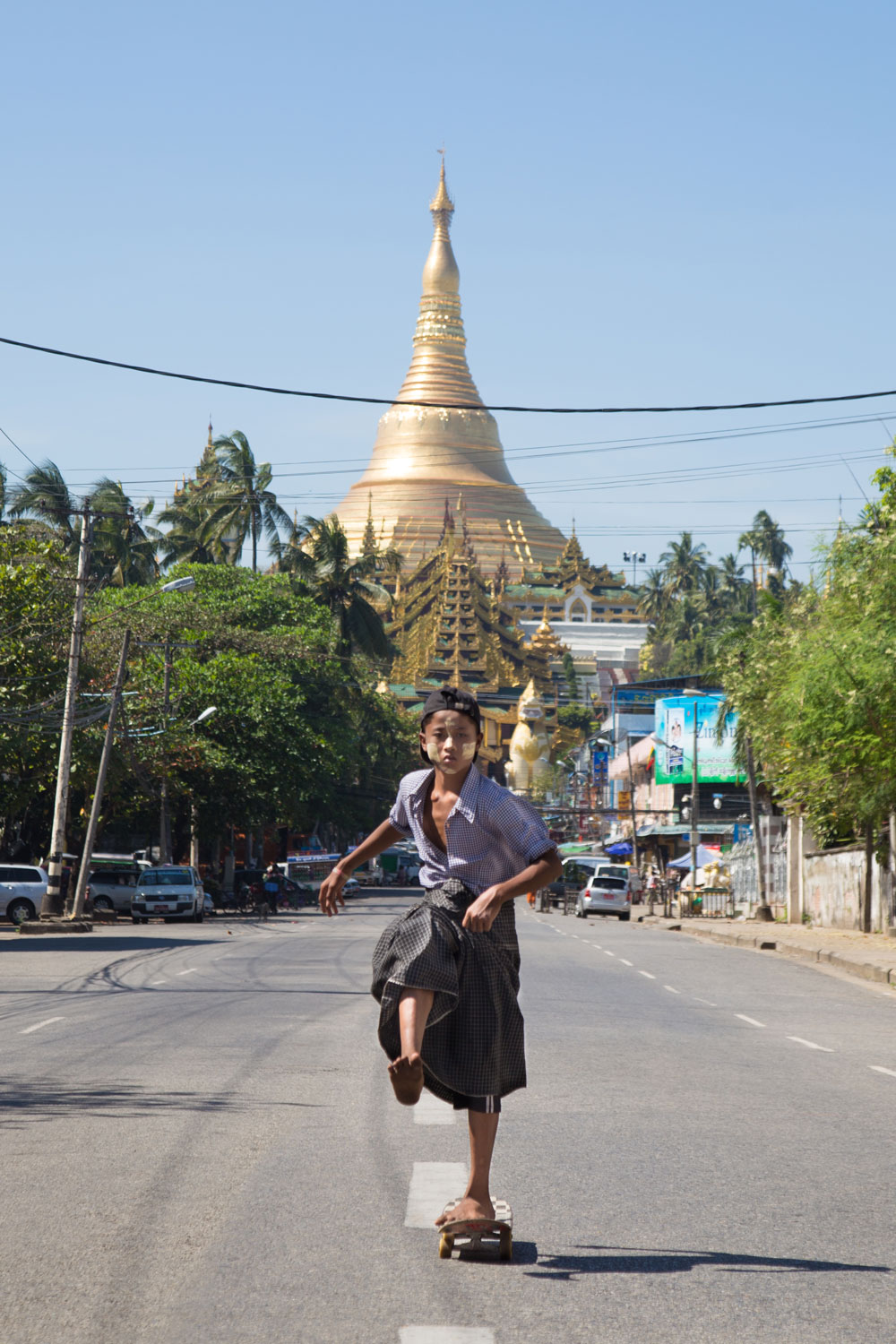 Waso isn’t actually your real name, is it? How did you get your nickname and what is the meaning behind it?
No, it’s not my real name. Waso is the name of the month of July in the traditional Burmese Buddhist calendar. I was born in the month of Waso, so people in the neighborhood gave me that nickname and it just stuck. I like it.

In the film you skate in a longyi (a traditional Burmese sarong for men, pronounced ‘lone-jee’). Can you explain a little bit about how you wear a longyi and what it’s like to skate in one? Do many Myanmar skaters skate wearing longyi?
No, Myanmar skaters don’t skate wearing longyi. It’s more comfortable to skate wearing pants or trousers. You have to wrap the longyi around your waist and tie it in a knot at the front to stop it from coming undone and falling down. If you skate it in, it can easily come undone because you are moving and jumping around a lot. I didn’t own any trousers, all I wore was a longyi, so that’s why I started skating wearing it.

How is skateboarding in Yangon these days?
Things in Yangon are not good at the moment. There are many more cases of COVID and the political situation is really bad. There are police and soldiers with guns everywhere. We can’t freely go and skate around the streets anymore like we used to.

What tricks do you like to do? Do you prefer to skate at the park or skate street?
My favourite tricks to do are Backside Heelfips and Inward Heelflips. I prefer to skate in the skatepark. It’s safe and easier to skate there.

What do you think you would be doing if you hadn’t found skateboarding?
I would probably still be hanging out on the streets getting up to no good, not caring about anything. It’s because of the skatepark and the people there that I have been able to make friends with people who look out for me. I also got to become friends with skaters from other parts of the city. 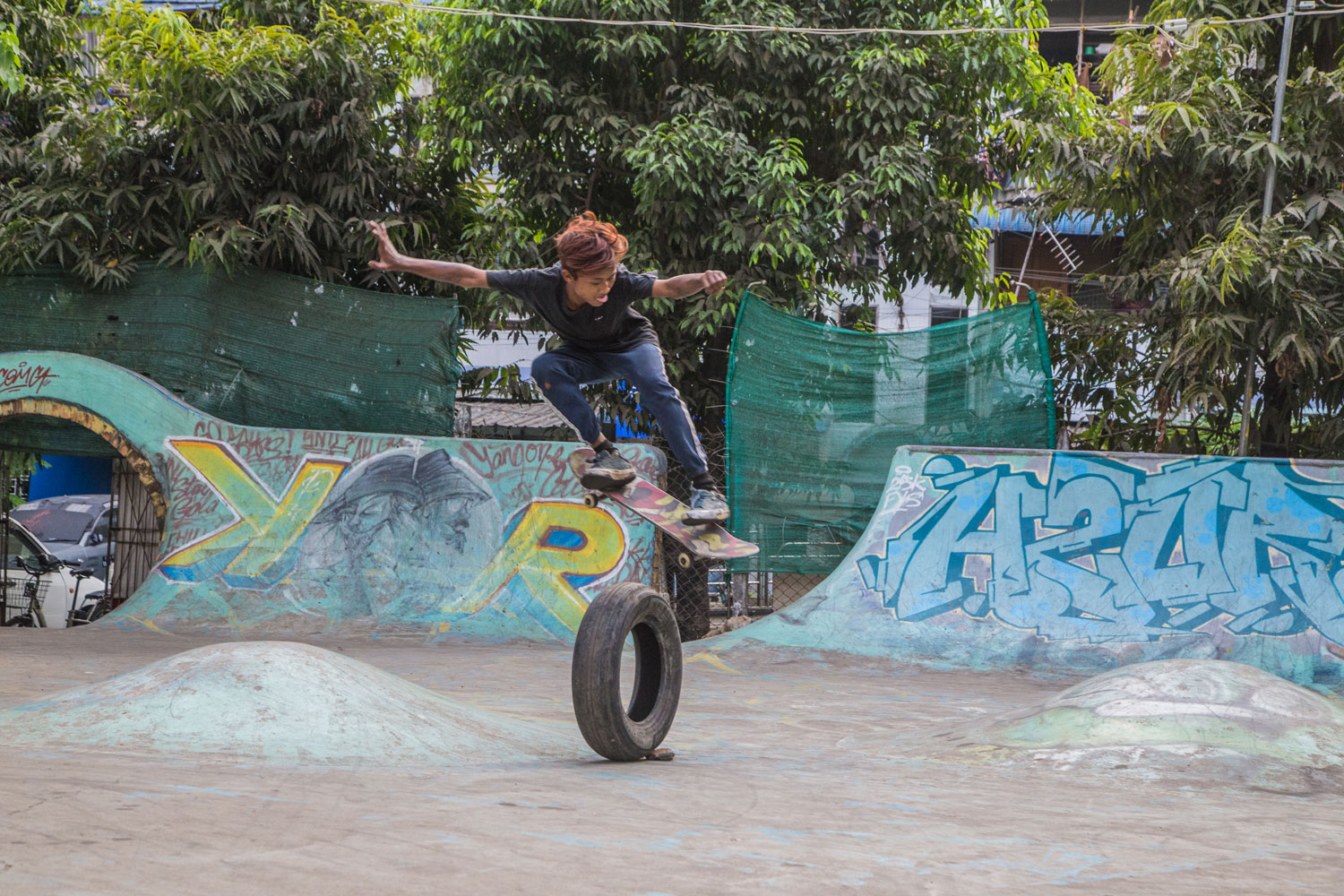 What are your hopes for the future?
It’s my dream to one day become a professional skater. As for a normal job though, I would like to learn how to drive a car and become a delivery truck driver.

Any final comments or thoughts you would like to share?
I would like to say thank you to Pushing Myanmar and all the donors (past, present and future) for their support, and to all of the people who read this interview and watched the video. Kyay-zu-tin-ba-deh!