You’ve probably already seen some of the Loophole edits on our site. You know the ones with Chris Athans barreling down SF’s hills whilst doing flip tricks on every bump and wallrides at every opportunity, the smooth flowing prowess of Jameel Douglas on the city’s streets or Ben Gore’s lines in the avenues where he’s still constantly finding new nooks and nuggets in a city that’s been thoroughly combed through for decades. Well the dude following all these guys with a VX is Zach Chamberlin. And all of these edits were made in an effort to promote the unique urethane that this team of friends has chosen to endorse. ‘Not another wheel company!’ you may be thinking, but alas this isn’t your run of the mill off-the-shelf urethane, it has its own unique formula and is handmade by a skateboarding chemist right there in the Bay Area. We thought it would be good to have a little chat with Zach (keep in mind he’s the guy that filmed this and this), so read on to find out more about the brand, its team, some insight into his hill filming technique and why Loophole should be your next set of wheels.

Photography by Joe Madrigal
Interview by Will Harmon 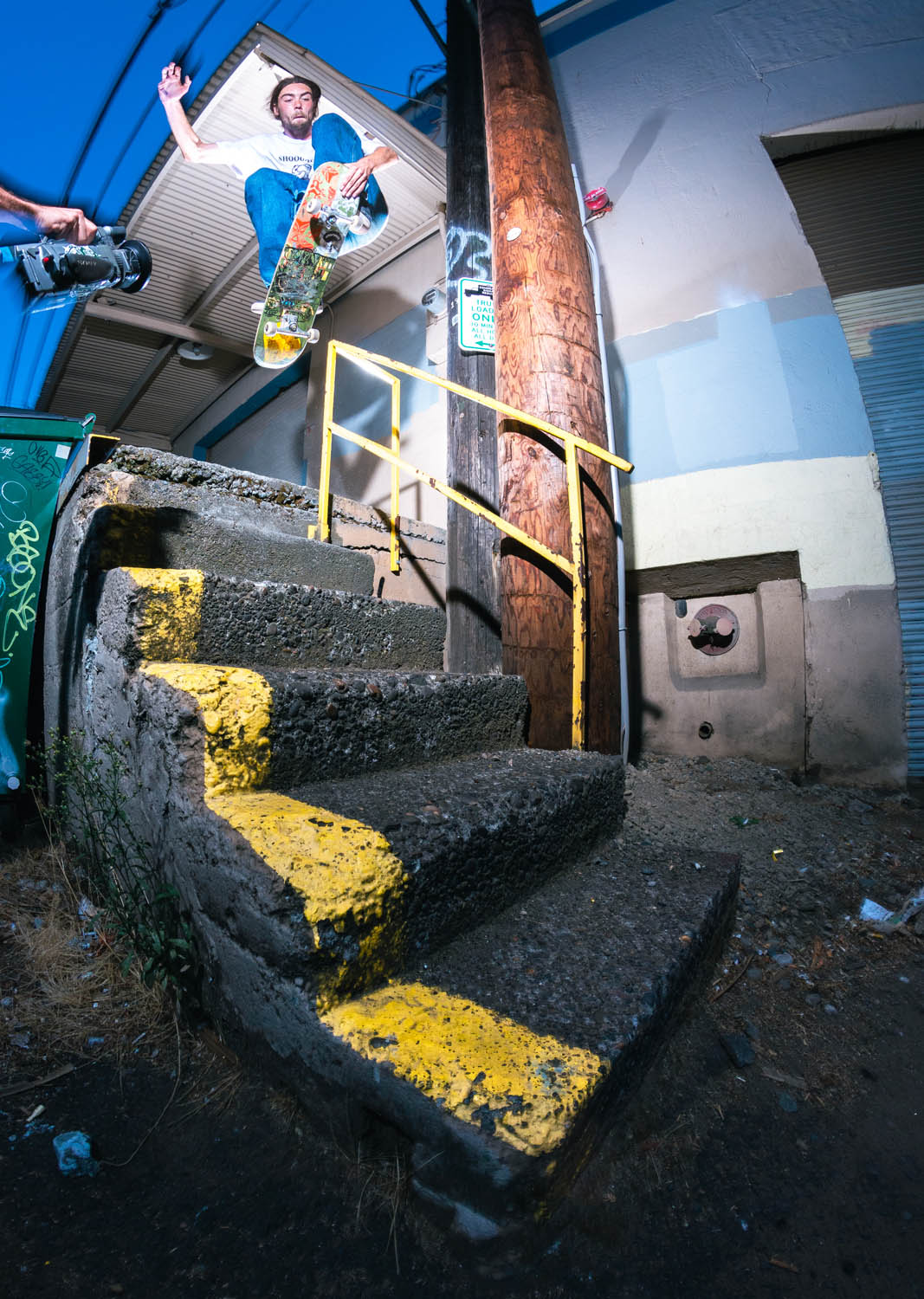 Knowing that San Francisco is home to arguably the world’s biggest skateboard wheel manufacturer, what made you decide to start your own wheel company there?
My partner Jesse Narvaez and I always talked and dreamed of doing something one day. Doing a wheel brand never really crossed my mind, but about three years ago a longtime friend of Jesse’s started a wheel manufacturing company in the city next to their hometown. When it started he dropped off some prototype sets for us to try out. Before trying the wheels it felt like a crazy idea to start a wheel company here, but then we tried them and the feeling was perfect. It felt familiar to the kind of wheels I liked to skate at that time but with a different, better, new feeling as well. They felt faster. And the slide is not too icy but still glides and you can still lock and hold a slide without worrying about flat spots. So really I didn’t want to start a wheel company, but the wheels were asking me for it. They are incredible and the crew was behind it so we just went with it slowly with what money we could put in starting with 200 sets. 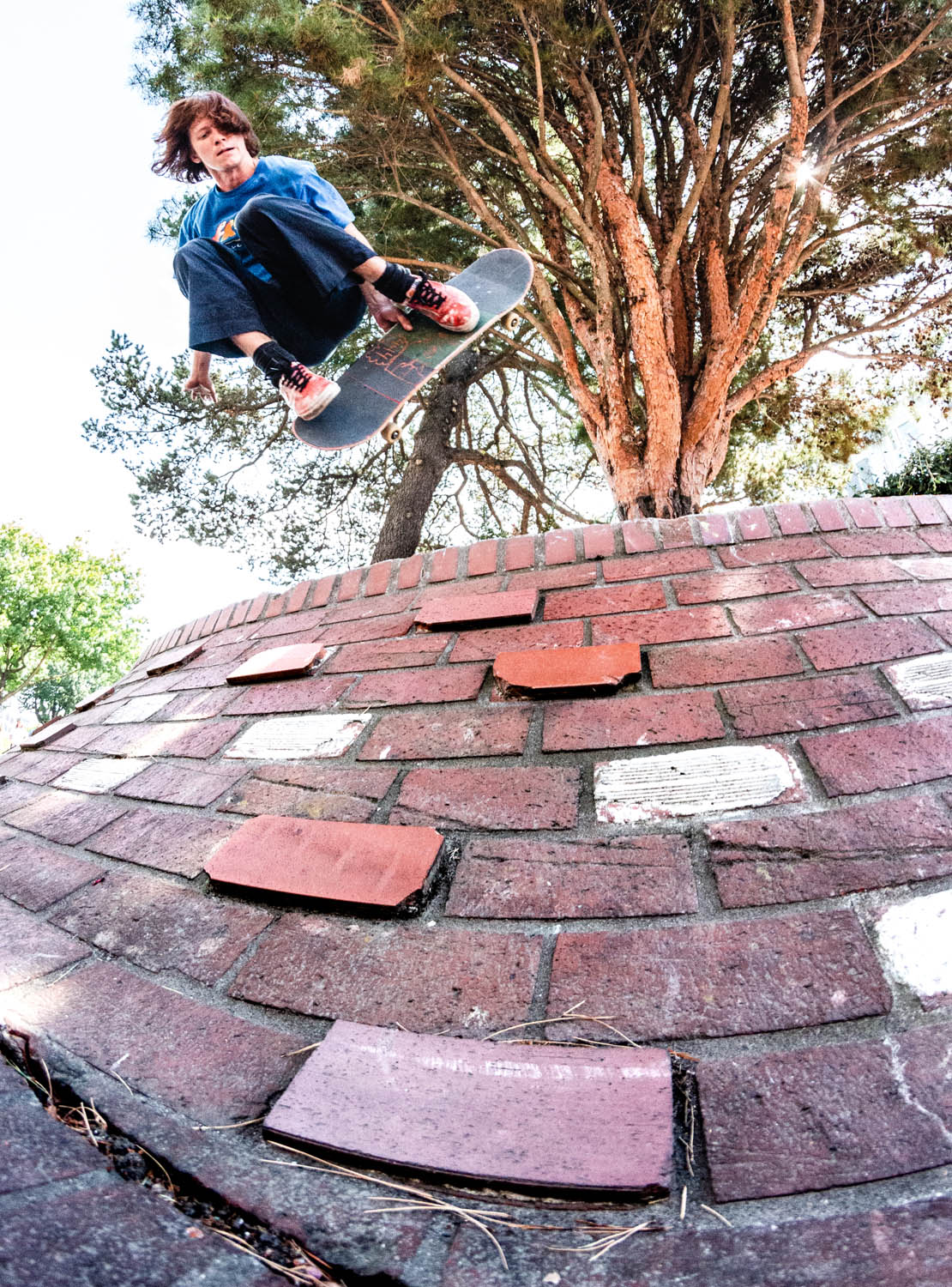 Who makes the wheels?
At first Jesse and our rider Jameel Douglas were in the shop assisting pouring the wheels and printing graphics. Now there is a precisely trained staff. Our guy who makes it all happen is a longtime urethane chemist. It’s all small batches and very limited. The staff and machines do an amazing job but can only work so fast. The ovens have to cure the wheels and can only hold so much at a time as well. Things have grown really well though over the past three years and new leaps are being made all the time. More ovens, moulds, new sizes and shapes… Different hardness options are in the works. We will have to get an interview with the chemist for all the details of making them. It can be quite fascinating and complicated. It’s located just about 20 minutes out of SF. 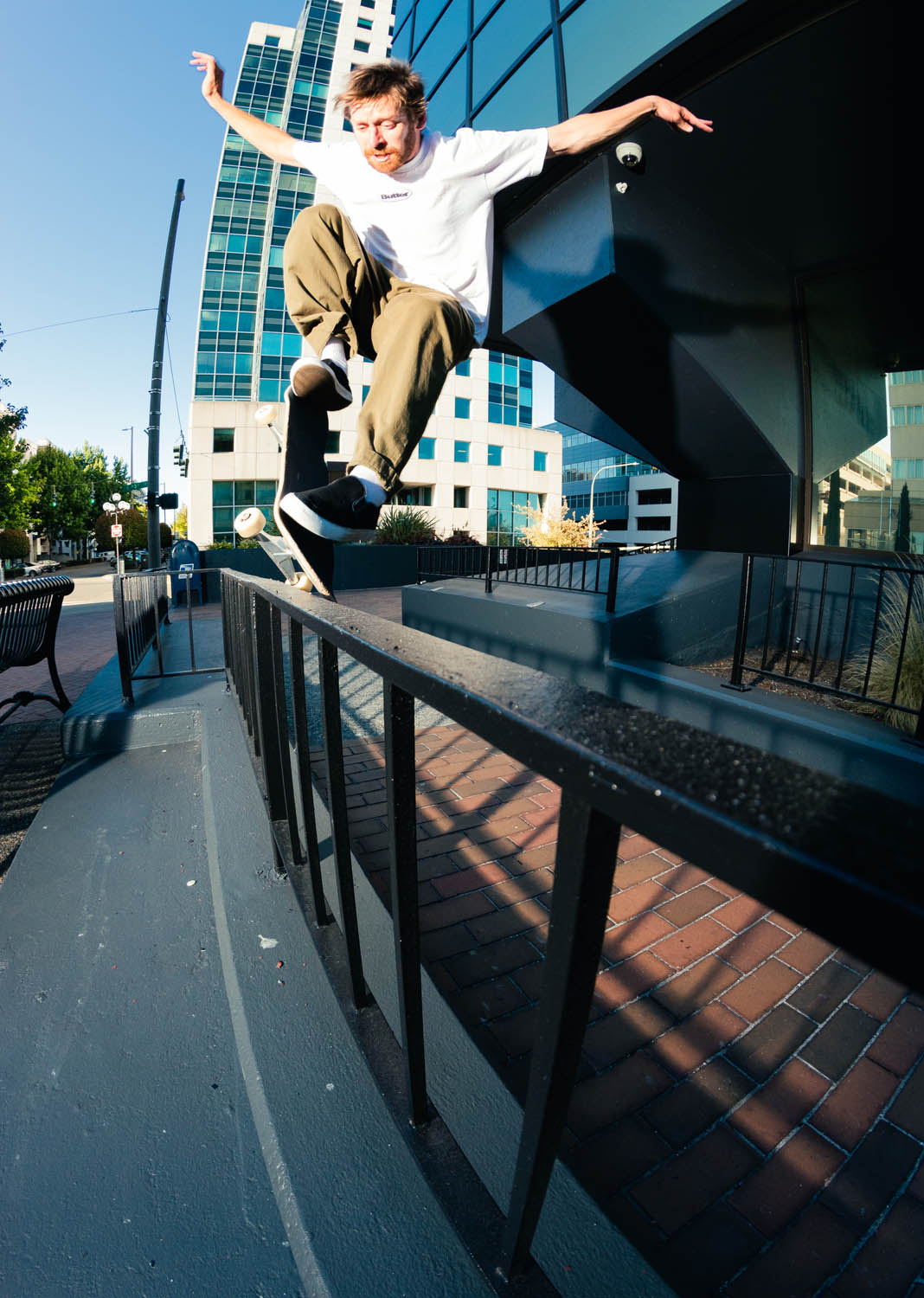 Ben Gore, ollie over to crook pop over.

I’ve ridden a few sets myself, and I can attest that they don’t flatspot. What would you say sets them apart from other high-quality wheels out there?
Hey thanks! Trying new wheels can be understandably hard to do and may feel risky for people who are use to the same setup every time. But I know Loophole is worth a try – overcome the banality of the same. Risk it for a better biscuit. We are 100% USA made; supplying jobs locally. The urethane is the highest quality from the best sources. The way the wheels are made with our moulds creates less urethane waste during the cutting process than typical moulds. We use less additives to bleach the wheels white therefore the colour of our wheels is closer to a natural urethane colour. Additives can weaken the wheel and it can wear down faster. I think our wheels have the most control and responsiveness to the movements we like to make. I’ve seen Chris Athans avoid some fucked up moments with cars and street sharks with powerslides that I would have died probably trying to foot drag out of or other wheels would have slipped out or not slowed down enough. 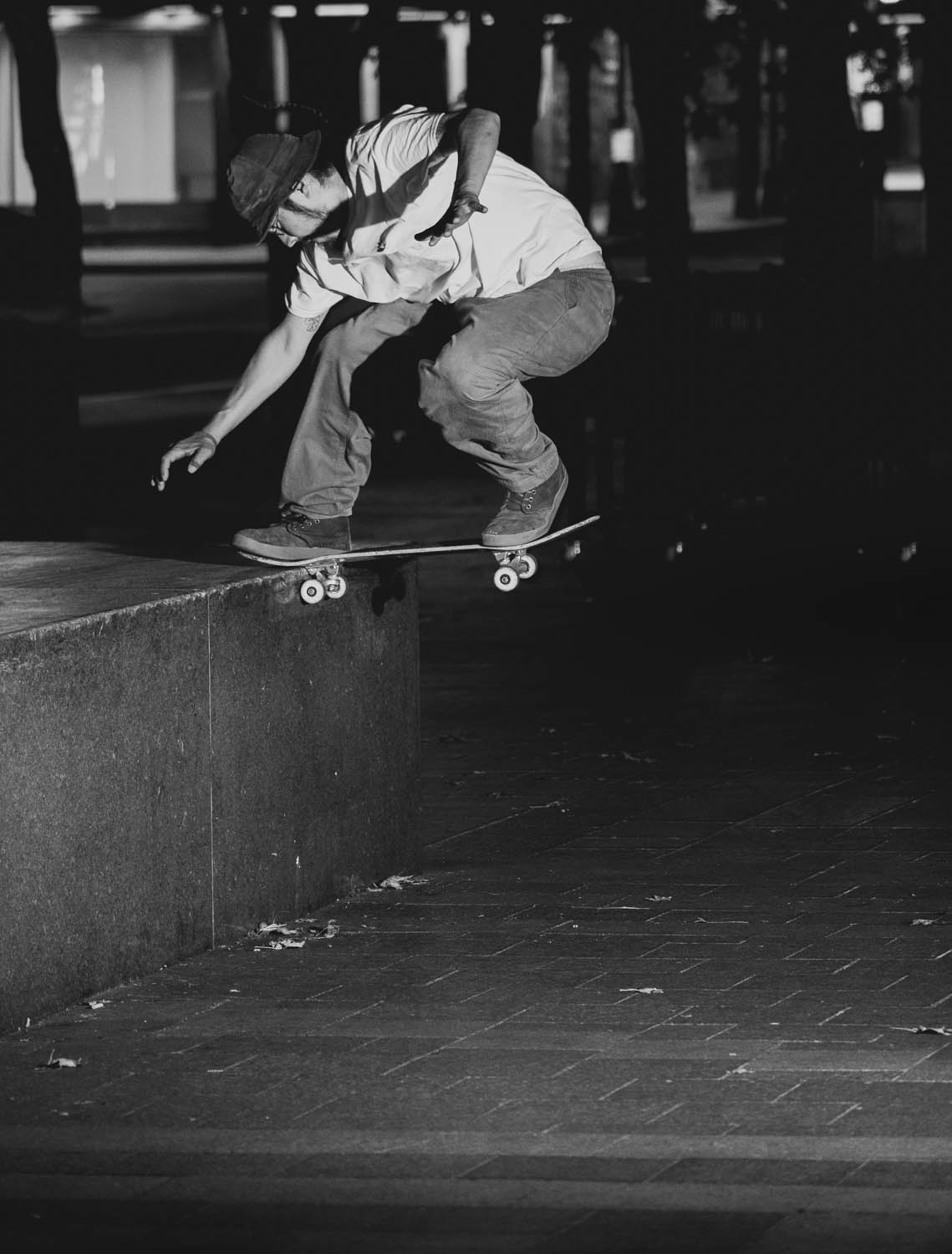 Can you tell us a little about who is on the team?
The team started with the guys who were around us and skating the most when we first started. Chris had just moved out here and was living with Jesse at their adopted grandmother Helens’ house. Jameel Douglas is Bay Area born and raised and pioneered some of our first pad-printed graphics. Roger Krebs is always living the loophole life giving back with spinning records, his infectious laugh or third eye ideas. Glen Fox came around SF for a visit right when we started Loophole so he was keen. Brian Powderly moved out here around the same time we started Loophole and it fell into place. Ben Gore joined forces too. Ty Beall and Sean Powderly (yes Brian’s brother) are new guys to the team. Josh Narvaez (No not Jesse’s brother) has been around since the onset when he first moved to SF. We got a younger gang of guys: Josh McLaughlin, Athen McCrary, James Levinski, Dylon Drew and our international and south of the border liaison Max Brooker. In Canada we have our long time friends Hugo Balek and Alexis Lecroix on the team. We are about to announce our new Pro rider and longtime friends from Japan to the team to accompany Shoma Taketa, Jinnosuke Okada and Tsuyoshi Uchida. Our French connect is also growing and Andrea Dupre and Gigi Nozieres are joining Santiago Sasson. Luis Aponte is part of our overseas connection. He lives in Spain but Jesse and I met him in Panama around ten years ago. Big thanks to all the filmers over the years that have helped especially Ryan Flores, Eddie Claire and Logan Matthews, and Joe Madrigal for lots of photos. Our team/our family are people we have got to know well over the years through mostly skating. It’s our dream team of friends to have a session with and people we enjoy to stay in touch with. 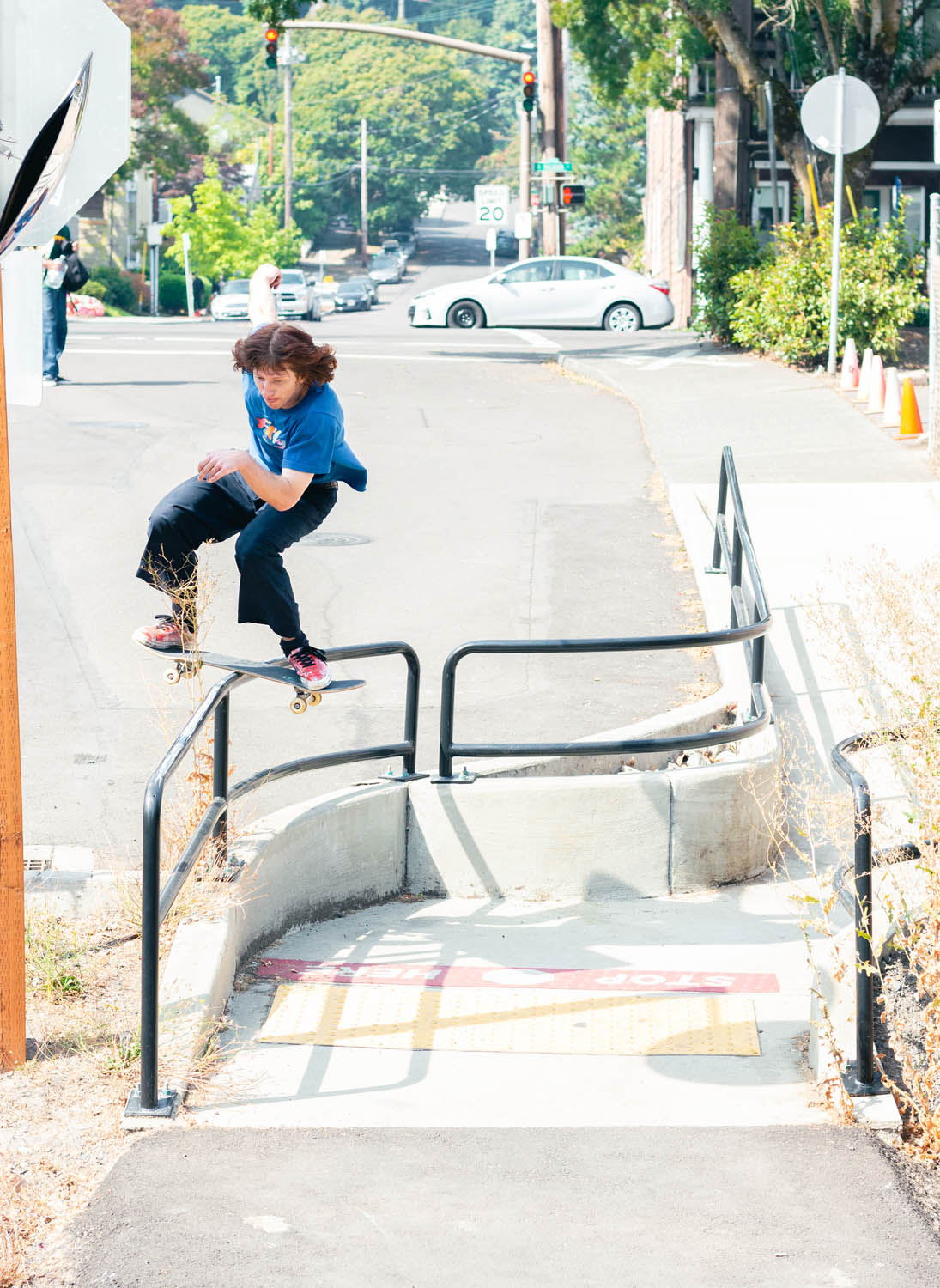 Your riders must have gotten other offers to ride for the big wheel brands, what made them stick with Loophole?
It’s family style here. I think the values and style Loophole embodies are the same or more similar to our riders than other brands. Theres not to many big brands where the riders are actually friends. Also we are growing and that gets seen and felt by the riders. We all support each other.

How long have you been running Loophole now? And who does the graphic design for the wheels and clothing you make?
We’ve been doing it about three years. I have been in charge of making graphics. I have done lots of them but its a lot of work for a guy who just wants to go skate and film. So I ask our riders and lots of friends for help. People close to us have done one-off graphics too. Glen Fox has helped with graphics. Daisuke Morai from Japan helps a lot. Fortunately we just got our friend Jonah who is a professional at everything graphic design and believes in us enough to help for a cheaper price than what his actual Harvard skills are worth. 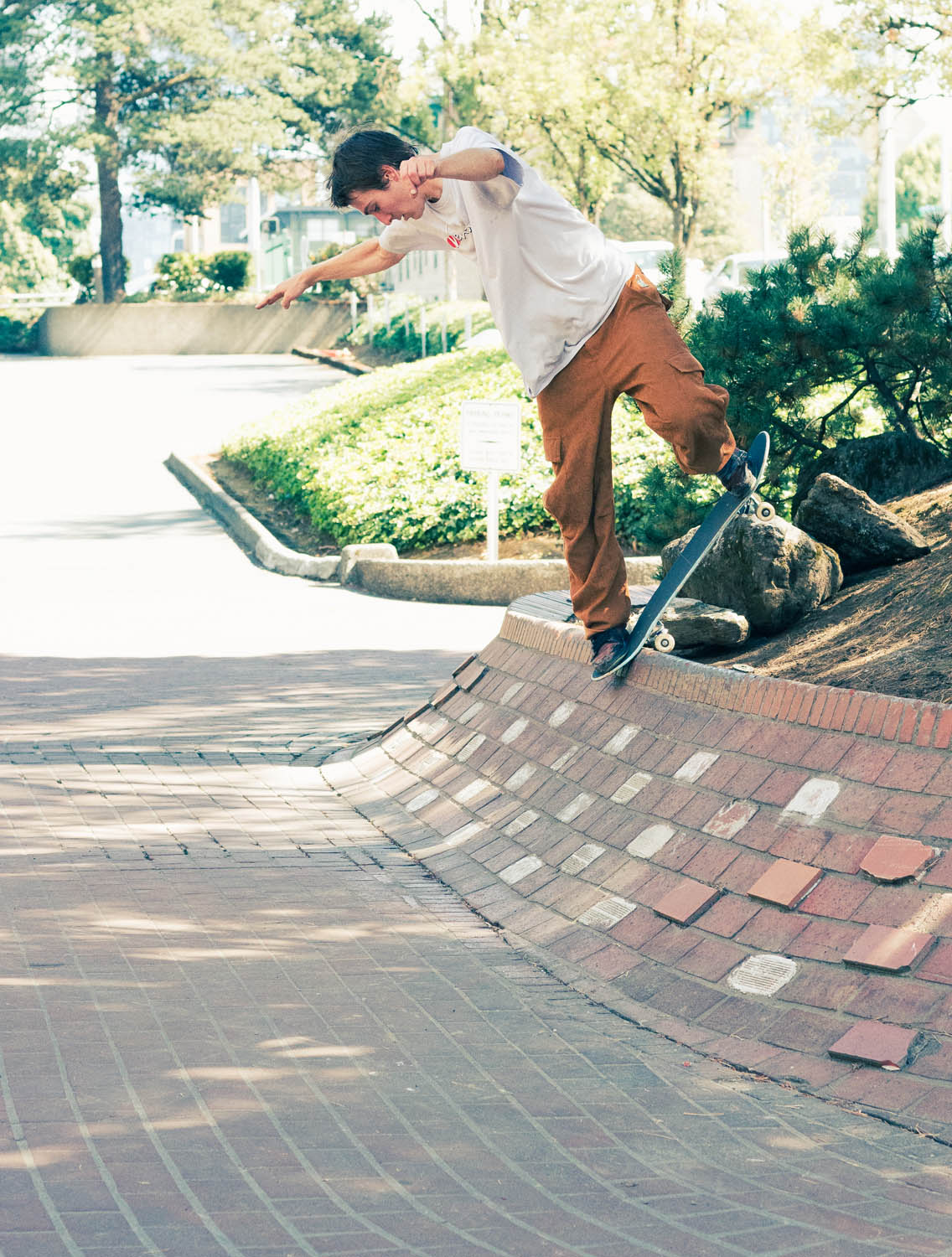 In your videos all the fisheye hillbomb filming tends to be at least as impressive as the tricks themselves, can you talk us through the process of filming some of the wilder ones? For instance Chris Athans’ closing line in the last vid? Or if there’s others you can think of that were even harder to film we’d be keen to hear about them too…
I think I naturally have a slightly different process depending on the situation. Sometimes I check every crack and area and visualise what it might look like before. Get the brain working. Put the puzzle together. Other times I just screw on the lens and go for it with the excitement of very little being known about whats gonna happen next. I like both ways. The Chris line was pretty spontaneous. I’d seen the spot for years and always knew it would look cool to try and make it down it somehow. The magic of a new day with new people and new visions is good stuff. Pretty sure Chris went a little higher up the hill to start from where I imagined. If my first thought is oh thats gonna be hard to film I get pretty stoked to see whats gonna happen. It makes putting in work fun.

Like do they usually have to redo the lines several times for you to get the filming right?
Nah! But of course its happened. 99% its because they are looking for that slightly better feeling they were searching for or just wanna feel it again. 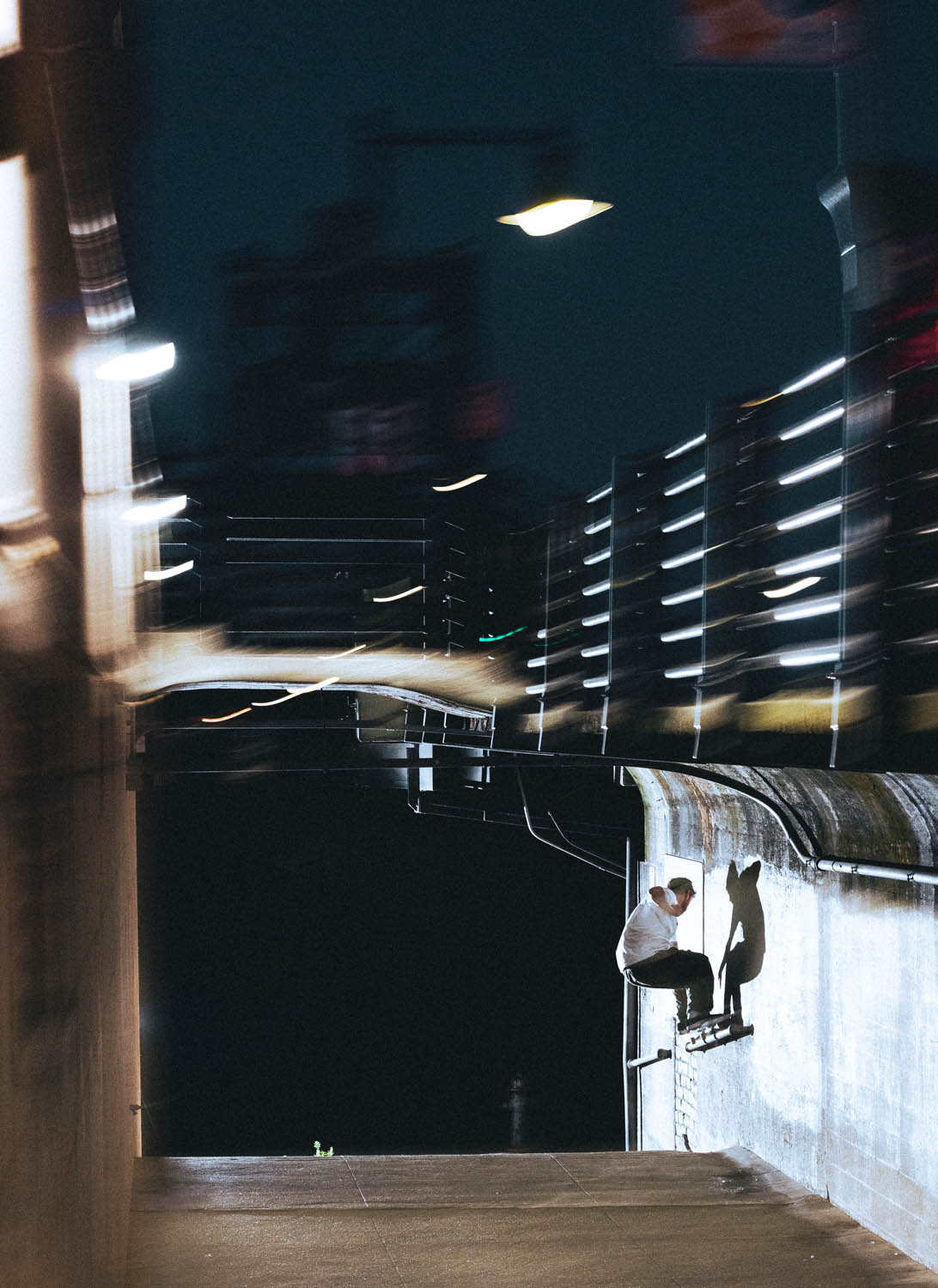 Do you slam a lot filming shit like this? If so, what’s it usually on? Going up curbs? Running down stairs? Pushing/slowing down?
For sure I get smoked filming. Normally it’s a hole in the ground or something I don’t see and it sends me superman with my elbow tucked in to perfectly execute an elbow to the ribs or sternum technique.

You’re obviously not powersliding when these dudes are, how many pairs of shoes do you go through a month?
Shout out to Areth Footwear. I can make a pair last about 1.5 months. Its some serious quality shit that–really for me-–there is no going back. 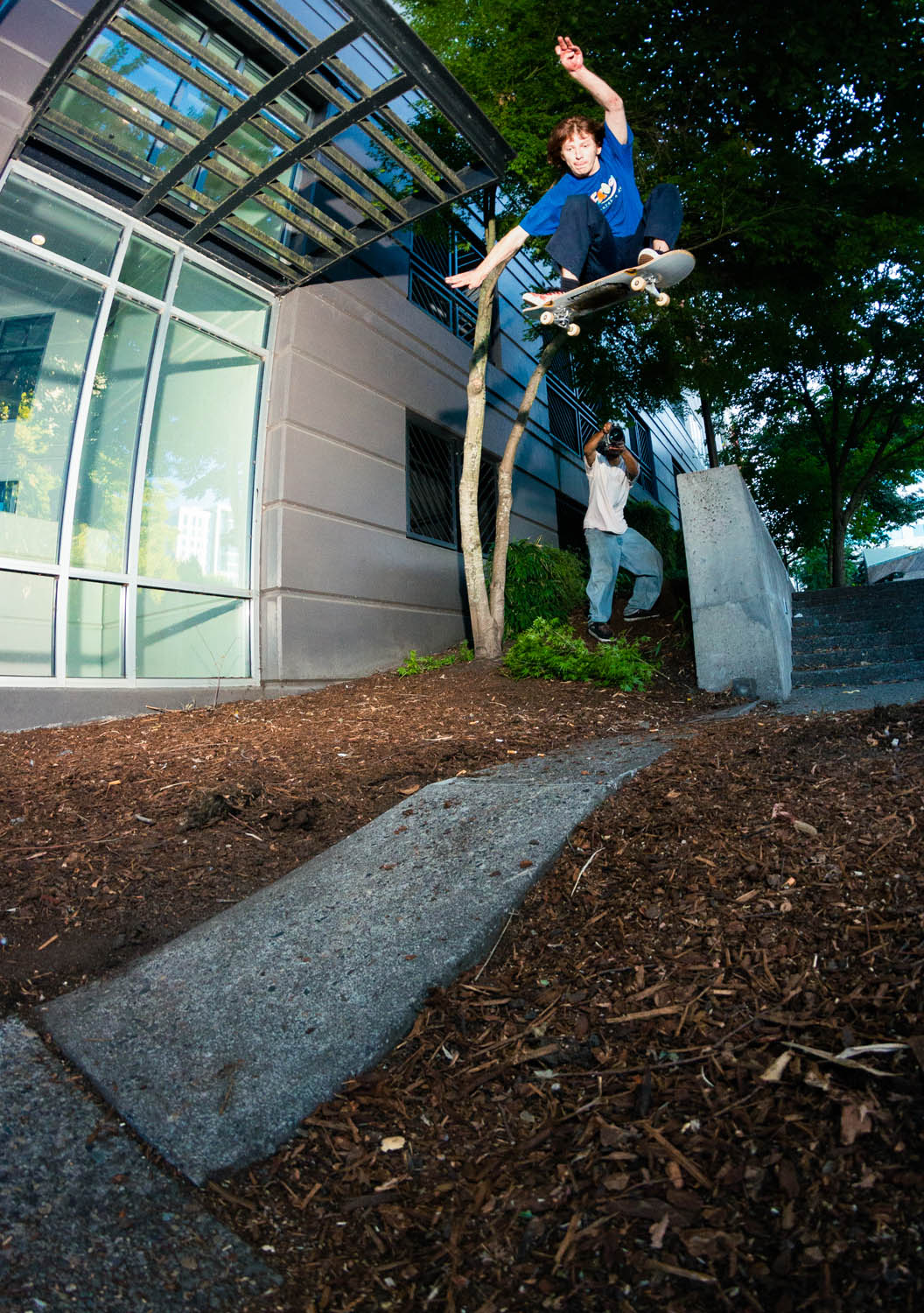 Athen McCrary, frontside 180 into the bank.

So this new edit focuses on a trip to Seattle and Portland… Why did you decide to go there? What were some of the highlights?
Well one of my best friends Max was heading to Portland (where we grew up) for a celebration of life for his brother. Many different emotions later I asked him if he would be down to do a skate trip while he was in town and be around friends, support and have some fun as much as possible. He said he was in. I wanted to make it cheapest possible for all the Loophole riders to be able to come. So I rented a van and stayed at my mom’s house in Portland ha ha. Unfortunately the water broke when we arrived at the house so were taking hose baths outside and making lines at the morning coffee spot. We met this puppy we called Cheesy Paper. Portland was just about two days and then we went to Seattle for about seven. Most the boys stayed at the Dope Planet ramp where Josh McLaughlin used to live. Thanks to the lads there. That place is real magic.

Please tell me you found Carlos Young somewhere up there near Seattle!
If anyone sees him tell him the bay misses him.

I know in the past Loophole edits have been quite international: Mexico, Japan, etc. So I’m sure the pandemic has stymied your plans to travel abroad… Anything planned for 2022?
I think we would have tried to plan something but I’m quite in love with SF so its been great staying here. We got some new guys getting on so we will probably try to have some of them out here to SF and work on some things.

Loophole Wheels can be found in the UK and Europe at the Palomino and SkateDeluxe respectively. 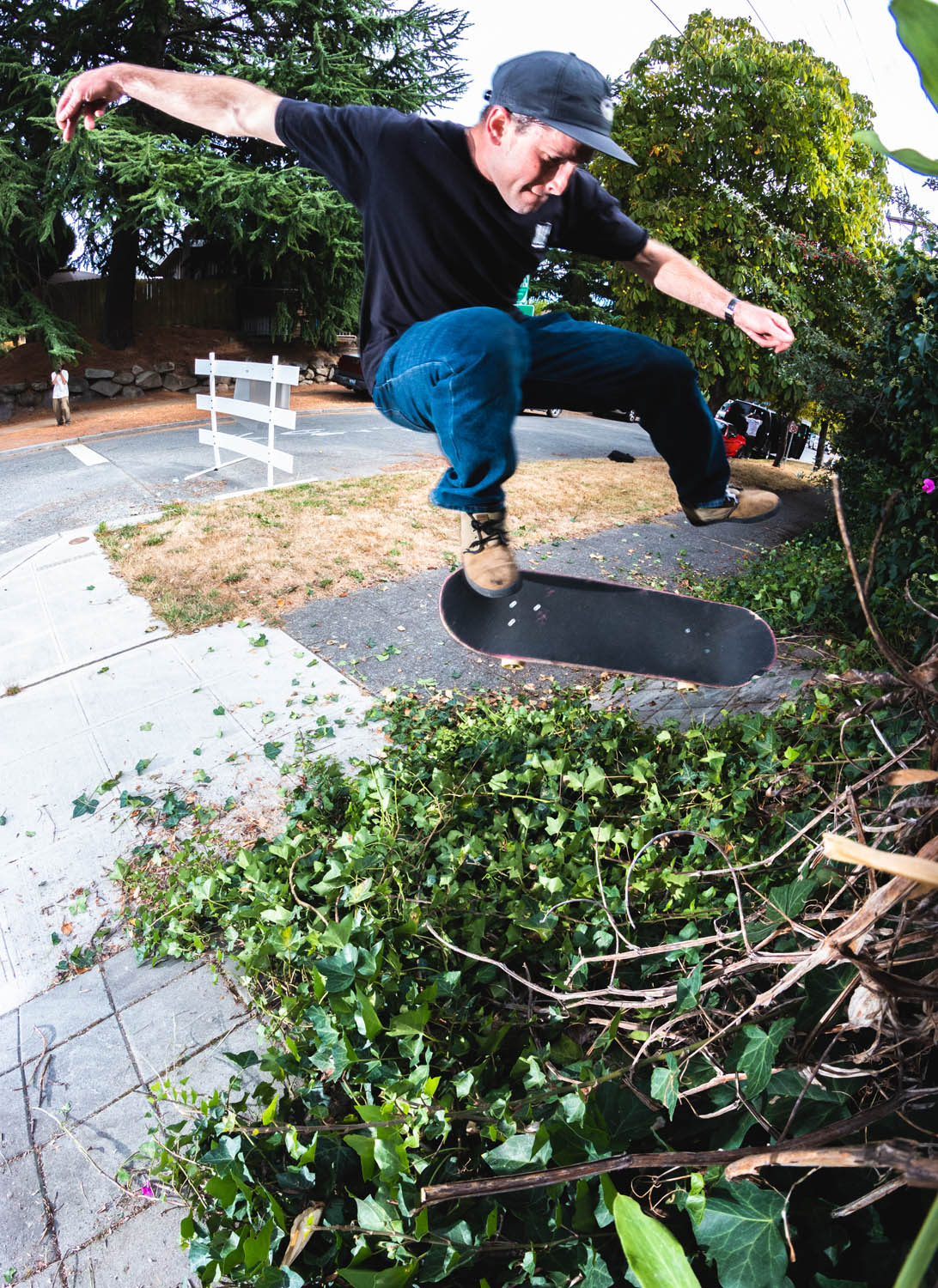