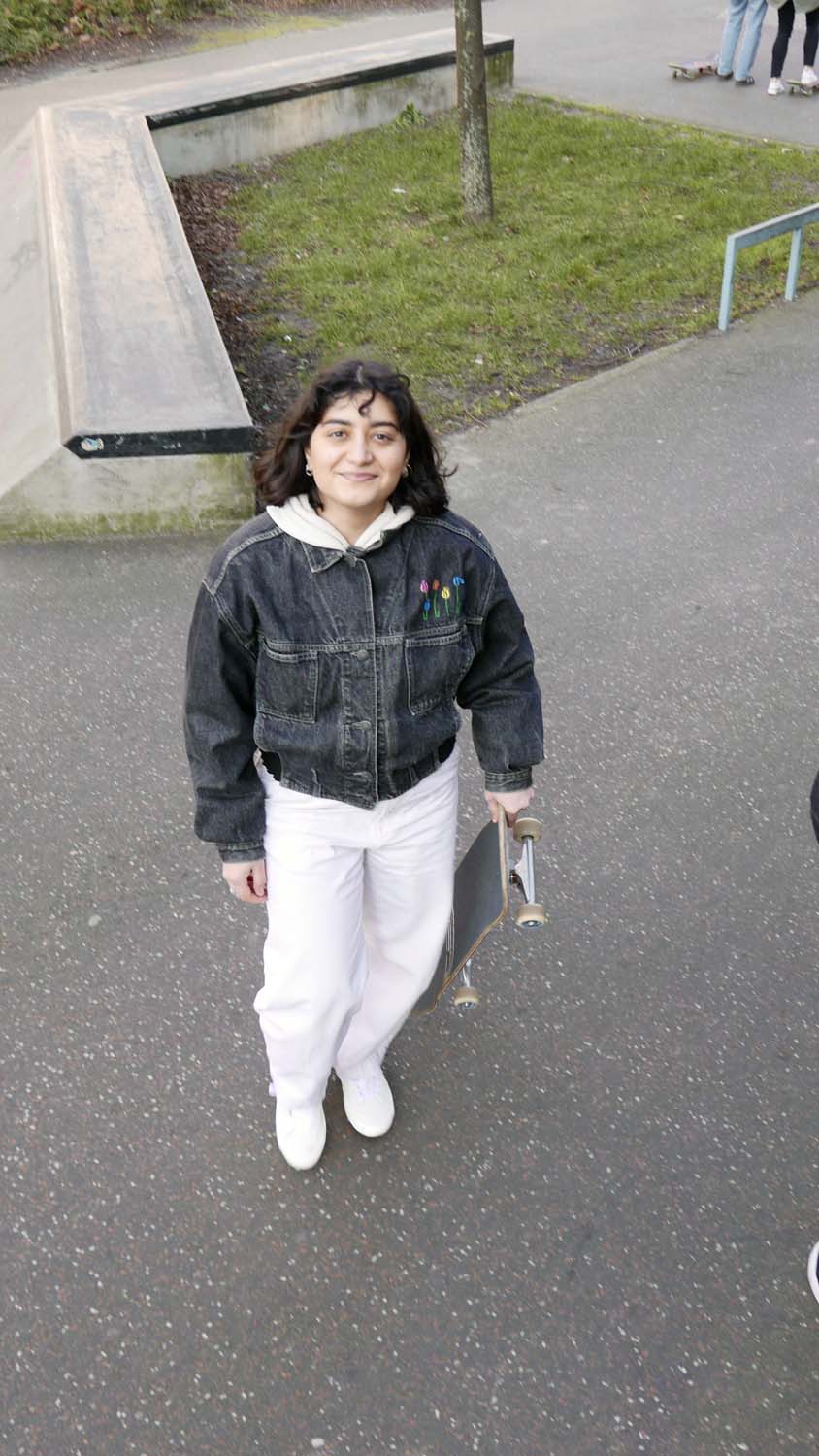 In honor of International Women’s Day, the women and queer skate collective NEW WAVE gathered in Rotterdam’s city centre, as part of weekend-long FEM FEST. NEW WAVE’s mission is to create an equal skate community for all; they invited everyone curious about their mission to join them for a sesh at Westblaak skatepark. Preceding the session was a Pushing Boarders-like panel discussion about the experiences of women and queer skaters and the importance of safe spaces. I invite you along on my account of this empowering celebration.

During the first lockdown in the summer of 2020 I, like numerous others, was bored to death and started my new hobby of skateboarding. I’ve tried to pick up skating a few times before, but growing up in a small rural town I always had a hard time finding friends to skate with. Now, living in the big metropole of Rotterdam, I found myself awed by a couple of skaters at the local skatepark in that late summer of 2020. I bought a board the very next day. Not much after I ran into Kim Butter, who told me she was going to start NEW WAVE.

Skip ahead 1.5 years and I can see how lucky I am to have been a part of its birth. Kim tells me she started skating in 2016 and the first two years she only skated with guys. During this time, she found herself at skatepark Westblaak all the time. “Most of the time it was so much fun, but I also got stared at or even catcalled at the skatepark, even though I was just trying to skate! It’s pretty hard to learn a new trick whilst a man next to you is making gross remarks about your body. I started wearing baggy clothes and hoodies because I liked the style. However, by wearing big pants and hiding my long hair into my hoodie, I also hoped people wouldn’t notice I was a girl.” Those first few years she definitely felt part of the core skateboarding culture. At the same time, she realized how cool it would be to skate with other women. That’s when she joined the organization Women Skate The World and founded NEW WAVE together with Negara Faghir in 2020. Together they started organizing events focused on women and queer skaters; today they organized their first panel talk. 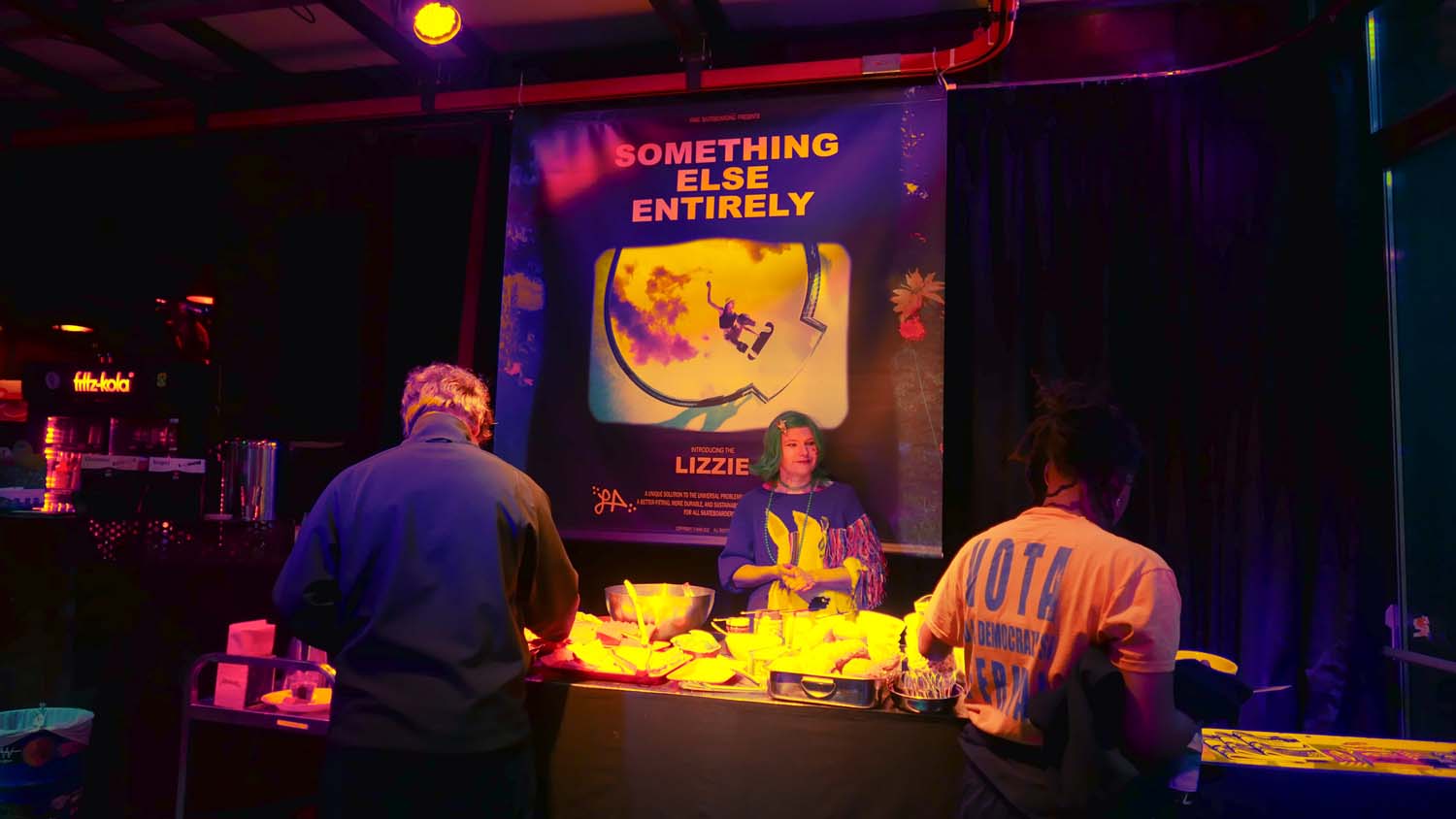 The event starts off with a brunch, held in cultural space WORM. The guests are welcomed with a simple but cute buffet, which serves foods that can’t be left out from a Dutch meal: plain bread, orange juice and peanut butter together with surprisingly delicious homemade hummus. A few people huddle hesitantly around the buffet to get food, while others gather in groups of recognition. There’s an air of solidarity and I notice the crowd is quite diverse. I meet Andre and Borus, who both identify as hetero men. “We’re here because we want to see a change in the skateboarding community, we want to make everyone feel welcome. Within our skating group, where we try to welcome everyone, we still hear about struggles from our women friends.” 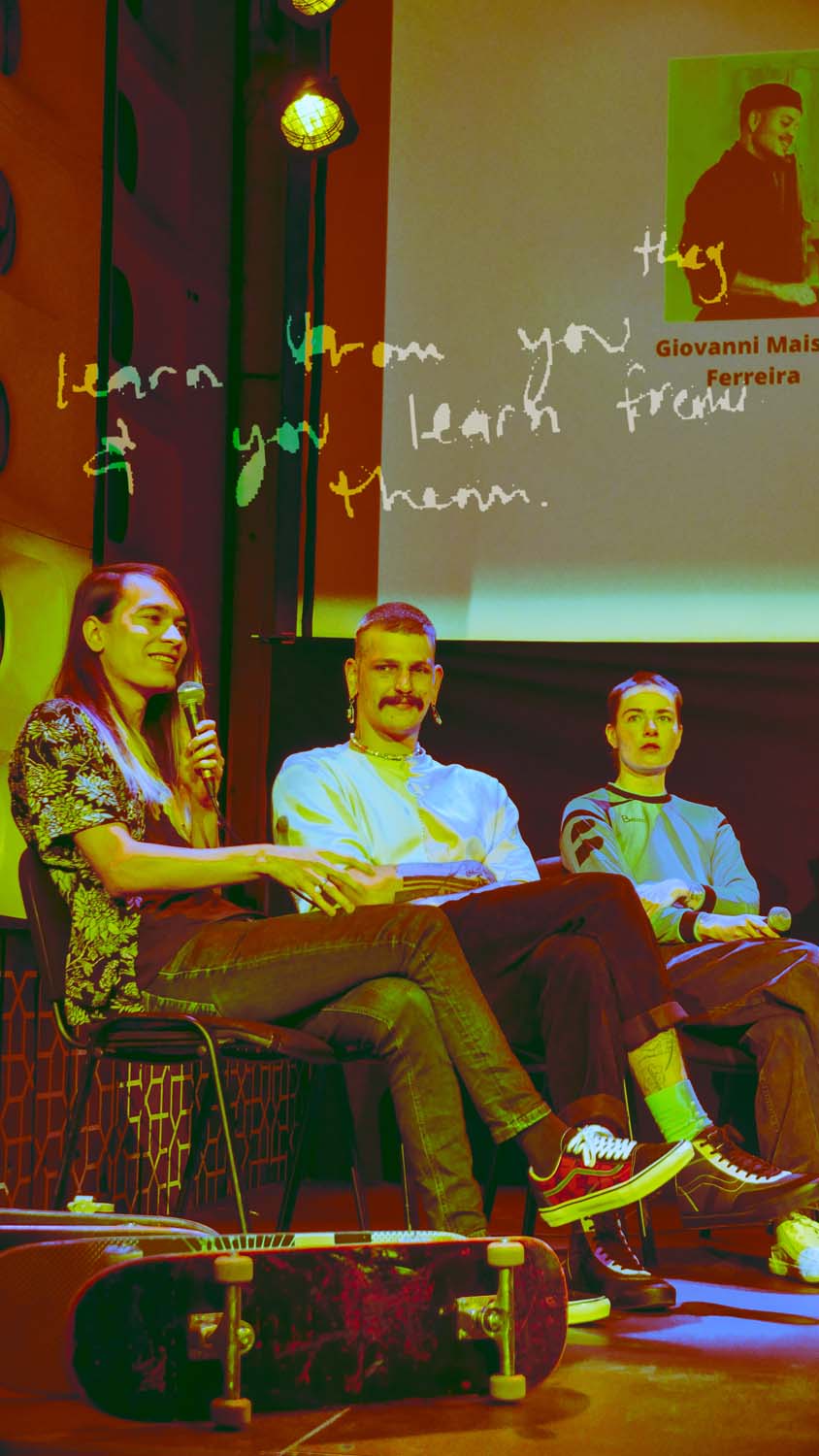 The panel discussion starts and I take a seat somewhere in the back. Host Gio guides us through some experiences and incentives of the panelists to mobilize themselves for women and queer skateboarders. Panelists include NEW WAVE volunteers but also initiators of other organizations pushing diversity in skateboarding. Just like the brunch, the discussion needs some time to get going, but once there’s room for people in the audience to ask questions, a new kind of energy is unleashed. The conversation is carried along topics like policy change, discrimination but also the image of skateboarders in general. It facilitates the opportunity to talk about everything.

Later, I talk to Noâh, one of the panelists. “Ideally, I’d skate wearing a crop top. When I’m skating with friends I do, but at skateparks like Westblaak I still feel a barrier to be completely myself. I know there are kids who make fun of me.” Noâh tells me they think panel discussions like these are a great first step toward uniting different people and perspectives. “Many people are put off by the idea of feminism: it makes them feel like everything they do is wrong. But I also know I’m part of my own bubble, it’s still okay for others to have different opinions.” Kim clarifies: “Some things won’t change on their own. I want to create the space to say stuff like: ‘no, it’s not okay to call people “gay” or a “pussy” when they don’t land a trick’. Things like these actually create an unwelcoming environment for many skaters. They’ll only change when we start talking about them.” To which Noâh adds: “We don’t want to create two worlds of ‘them’ against ‘us’; it’s time we bring those two worlds together.” 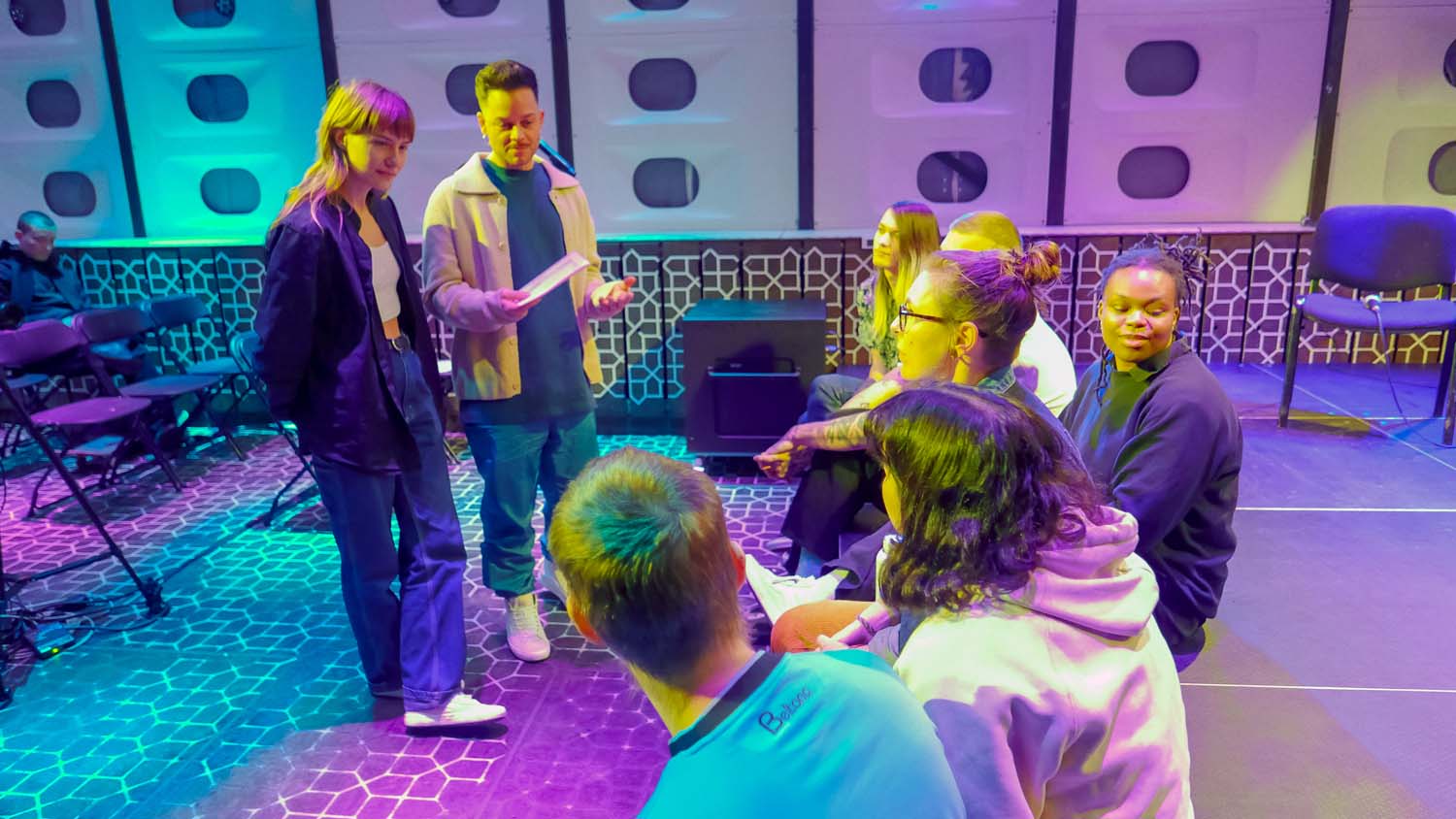 And that is exactly what the NEW WAVE x FEM FEST event permitted: it’s not just queer people and women who take part in the discussion. One of them is Frans, the director of Skateland, who asks advice on how to create a more welcoming environment for women and queer people in his skatepark, to which panelist Zakiya explains: “These little boys see you as their role model, you can tell them how they should and shouldn’t behave.” Another question comes up: people regularly wonder why cishet men are not allowed at the NEW WAVE women and queer only sessions, sometimes they feel left out. Panelist Nago says: “We’re trying to create a safe space for women and queer people to explore skateboarding. It’s a private event, if I don’t invite you to my birthday party there’s also no need to be offended.” Negara explains that sometimes you need to treat people differently in order to reach equality. “Imagine a person with a loud voice and one with a soft voice. You want to give a microphone to the person with the soft voice, because only then we’ll be able to hear both of them. In a situation like this, you wouldn’t feel bad for the loud voice getting no microphone.” The women and queer only sessions serve as a microphone for those who have long been underrepresented in skateboarding. Today’s open event is one of NEW WAVE’s first steps towards bringing skateboarders in all their diversity together. 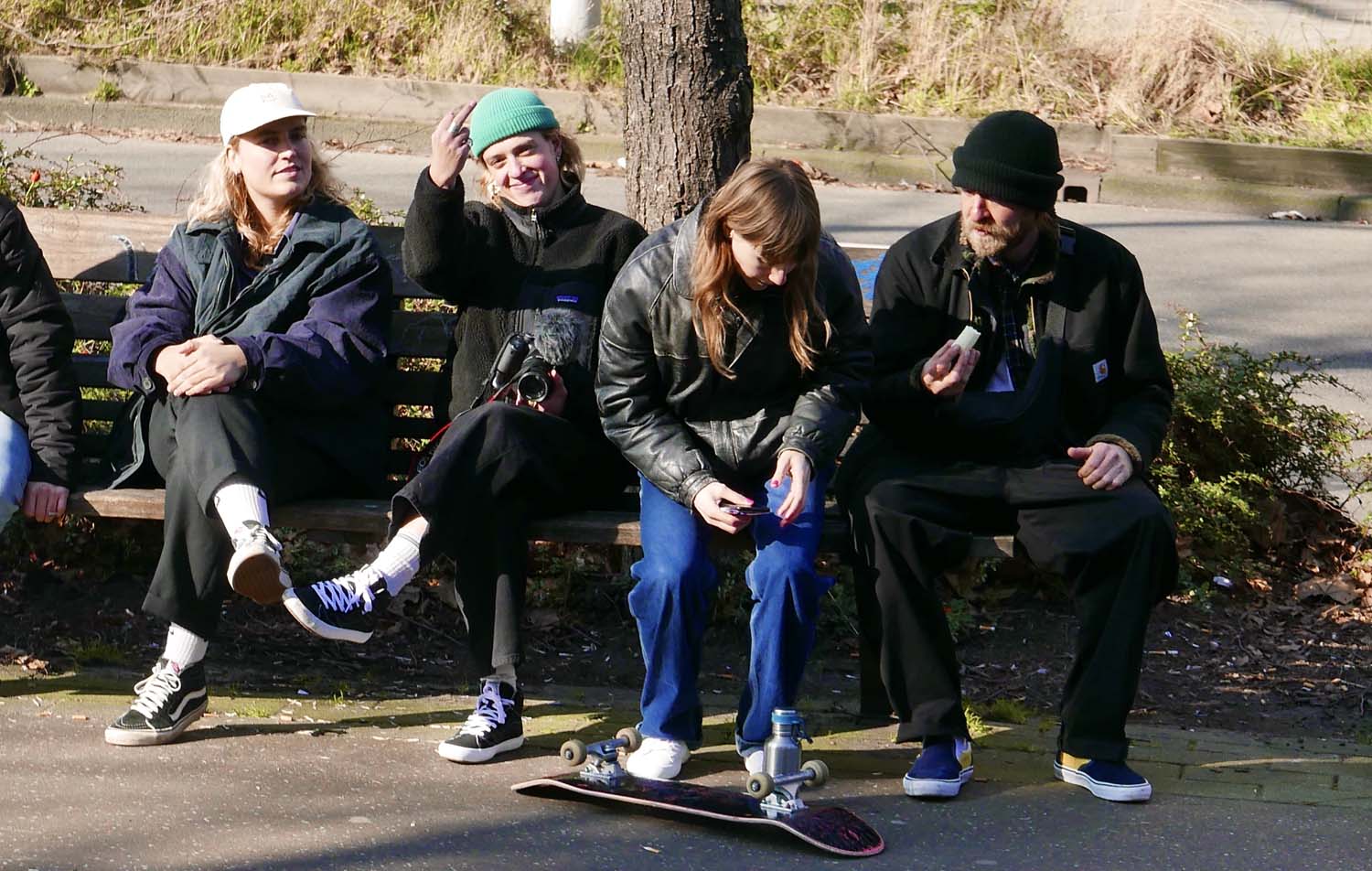 After the panel discussion, we head to Westblaak skatepark just around the corner from WORM. Boards and protective gear are handed out by volunteers and left-overs from the brunch are arrayed on a table. Andre and Borus admit this park has its own culture: “This park is intimidating, also for men. But we can imagine it’s worse for women.” This sentiment is shared by different people I speak to, including Saskia. She tells me she tried skateboarding in the late nineties, but was quickly discouraged by being the only woman skating in her city back then. She has been back into skateboarding for two years now and to her it feels like the skateboarding community is ready to welcome a new change. “I never go to Westblaak on my own, that just seems really scary to me. But because of the NEW WAVE sessions, I’ve become more empowered to skate alone. I’m glad we’re here today. We’re taking up space, both physically as well as metaphorically. And who knows, maybe next time we will be bold enough to come to this park on our own.” 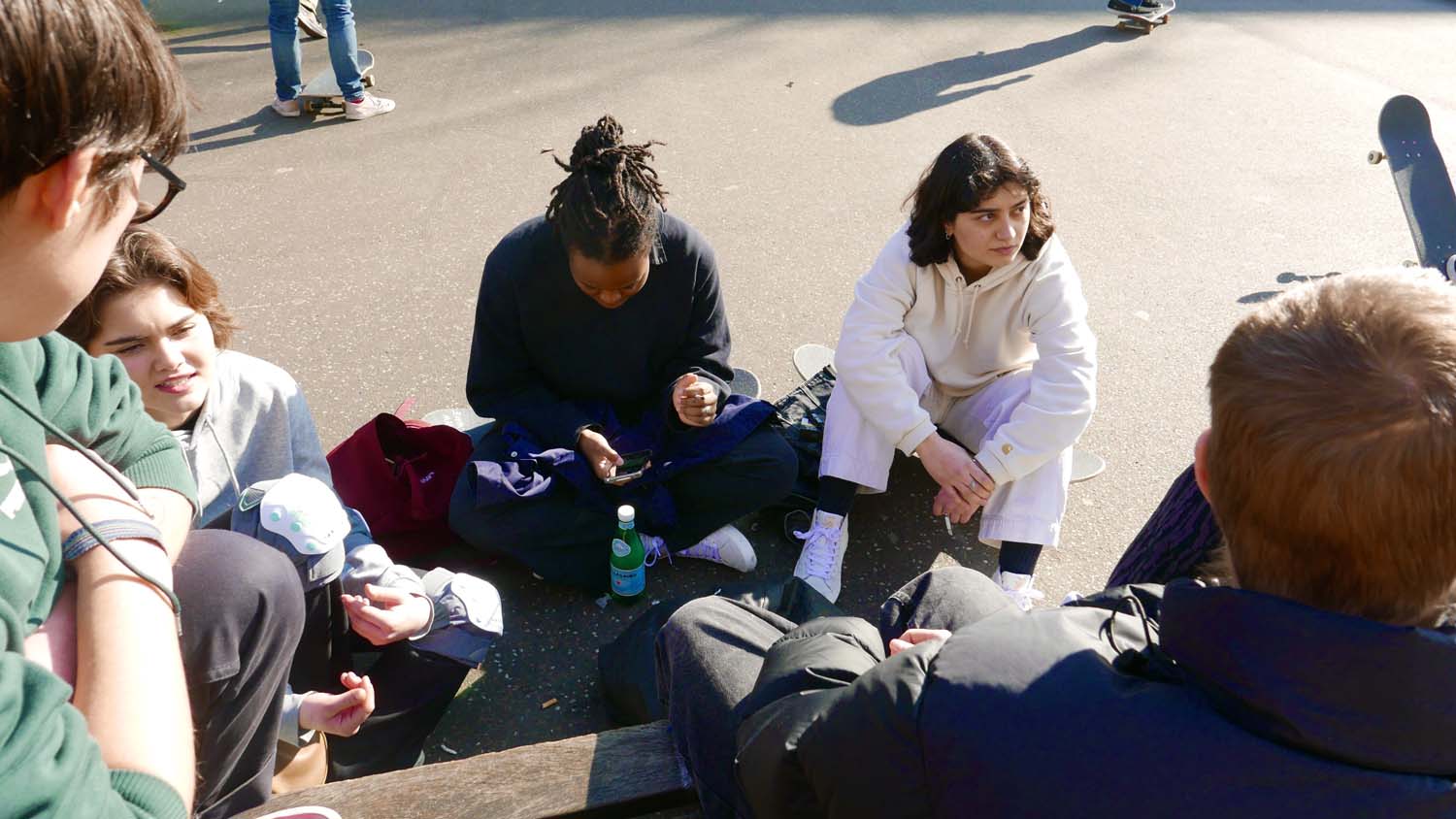 Soon enough, I notice a line forming at the small ramp, and skaters of all levels take turns practicing their kickturns and cheering each other on. A woman shows up at the NEW WAVE stand asking for more information. “I missed the panel, but heard about NEW WAVE and wanted to know more,” Gemma explains. “I have no experience in skateboarding, but so far I can totally see myself as a part of this and I’d like to become a volunteer.” All NEW WAVE’s boards are lent out and there are a bunch of people trying to skate for the first time. This must be today’s most powerful event: the joy and fun of skateboarding spreading to people who have never touched a board before.

NEW WAVE was founded in the Netherlands in 2020 and is growing in popularity ever since. Currently, the women and queer skate collective is hosting events in Rotterdam, Amsterdam and Sheffield (UK). They receive requests for their women and queer only sessions all the time, in fact, the demand is higher than they can physically meet. NEW WAVE invites everyone who is attracted to the idea of an equal skateboarding community to join the conversation. If you have any ideas, comments or want to join us on our mission, feel free to reach out.