For those of you who don’t know Lucien I’m going to start off by giving you a brief CV: he’s 19, from a little village in the mountains close to Annecy in France and is hyperactive, creative, young and talented. Lucien is inspired and inspiring, has incredible board control and is smart with his skating – he sees spots where others wouldn’t and skates them with ease. Too much ease. Forget your classic gaps, rails or tech ledge tricks, and think wallies, wallrides, manual to wallrides, gaps out of slappy curbs, dirt drop-ins, etc. Lucien gives flavour to his skating and does it well. I could keep going on like this about him for days, explaining that he’s a solid guy who looks out for the people around him, that he has an eye for spotting talent amongst his friends and that he’s always down to support them, I could talk about his sponsors, the various crews
he skates with, his career, and give you all the usual spiel
but I think the best way for you to get to know Lucien would be for you to spend a day out skating with him. So dear readers of Free, I’m pleased to offer you a typical day – well two actually – in the life of Lulu.
When Lucien isn’t in Annecy folding trousers at ABS Skateshop, these days he’s usually on his skateboard, in the streets, filming with Thomas Vigoureux. Thomas made the move to Paris shortly after finishing up Lucien’s first section, and up there he’s been filming him for Ace Trucks and Rave amongst others. They’re good friends so the long distance relationship didn’t get in the way of their productivity and it’s only natural that they’d choose to work together on this project (which is supported by Converse). 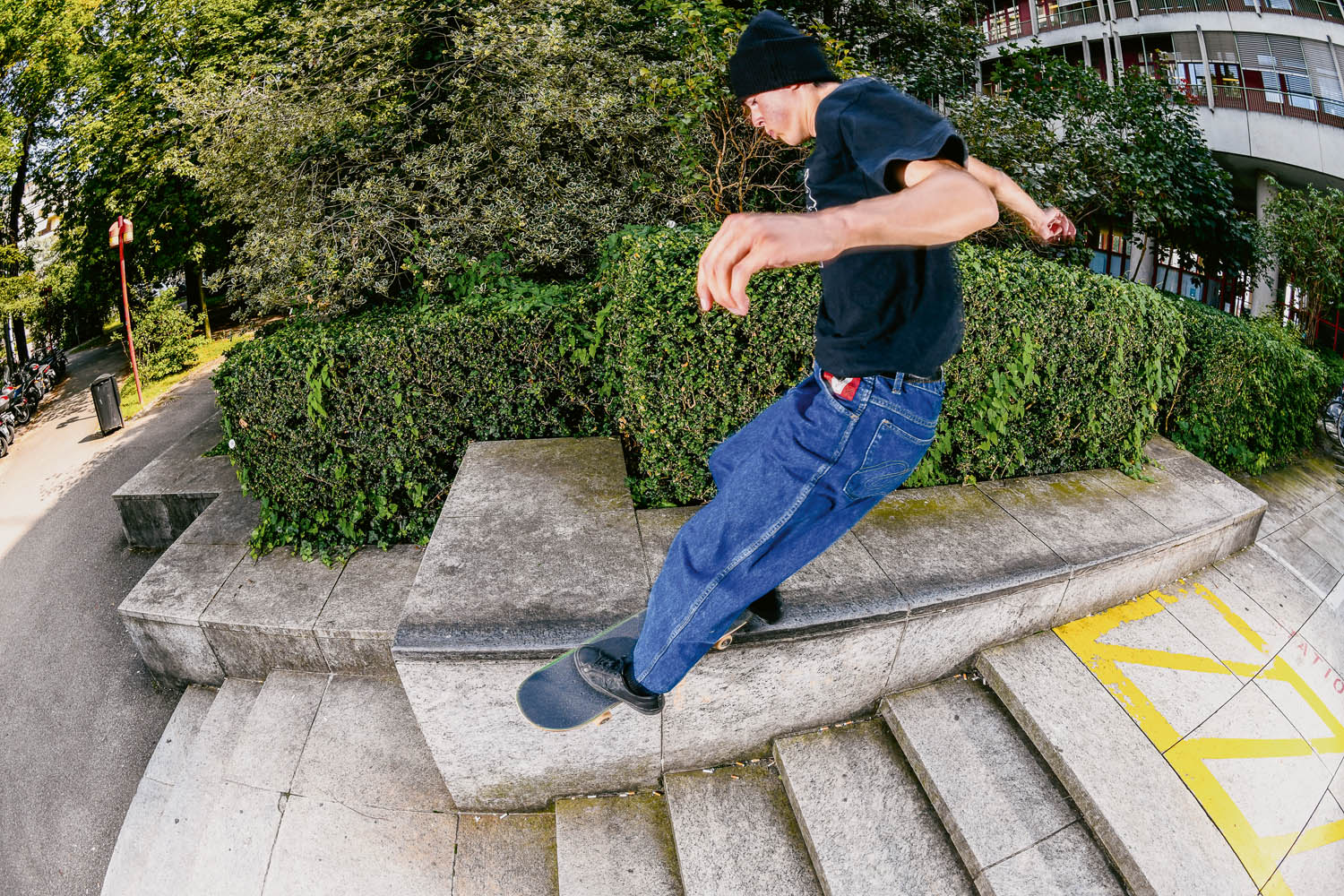 Lucien, tell us what a day of skating in Paris looks like for you.

08:00
I wake up on the sofa bed at Thomas’ aka Vigouz’s place in Pantin, then make my way to McDonald’s for breakfast after getting told off by Ludo, his flatmate, for getting Maccies again.

09:00
We find ourselves some Velibs… We get around on rental bikes a lot, just because it allows you to check out spots on the way and I’m not a huge fan of the metro. When I do use it though I always get a ticket, which the Parisiens I hang with find amusing as everyone there just bunks it. Anyway we get ourselves to a spot that we probably found on Google Street View or just wandering around the day before. I love finding spots that aren’t too straightforward, like if they’re a bit battered or don’t grind or that could be good but there’s just a tiny bit of concrete missing… There’s something I really enjoy about repairing, or adapting them with crowbars, rub bricks, bondo, hedge trimmers, etc. Recently I had to do a 1am hedge-trimming mission at this luxury apartment complex in Annecy because it was so heavily guarded… For some reason I find rolling away from something even more satisfying if you’ve had to prepare the spot a bit first. It’s what I like the most about skating: coming up with an idea for something you think would be good, and then doing everything you possibly can to make that idea a reality. Being around Lilian Fev and Val Bauer who are both really on it when it comes to fixing up spots and stuff probably influenced me a bit in that respect.

10:00
We get to the spot and I look for the right trick (as in a trick that I’ll actually enjoy doing but also that will look good there). There’s nothing worse than getting home in the evening after putting tons of energy into trying something and realising when you watch it back that you probably won’t use it. Or even checking the clip and realising that my outfit really bothers me… Although luckily that doesn’t happen too often these days as I always have two sets of clothes in my bag when I go out skating (both all black ha ha). I’ve got a bit of an OCD thing when it comes to that stuff, like I can’t even handle shoes with white soles. Or at least not on me, on other people they look fine. I should try to force myself…

12:00
If the trick was landed then I’m gassed and we all go eat at Relique Paris. If the trick wasn’t I’m bummed but we probably still all go for lunch at Relique Paris. It’s an incredible vintage shop created by Lilian Fev and his girlfriend, which has a lovely little courtyard where you can eat. There we’ll talk about anything and everything, from the latest skate gossip to Vigouz’s slam in the fountain at République the day before with his P2 and its extreme fisheye in his bag… In fact if anyone reading this has a 3D printer we could really do with a part for his fisheye. 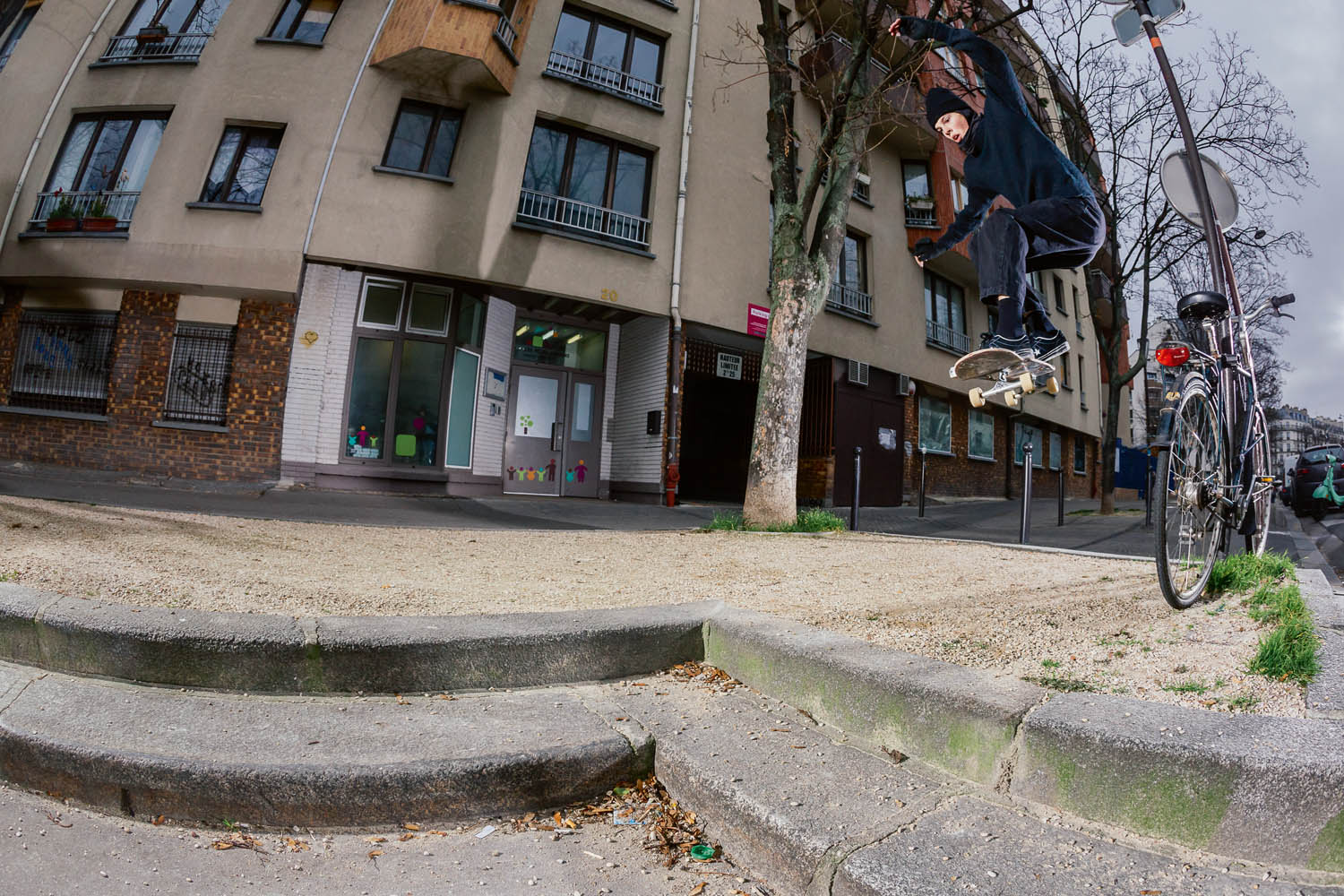 14:00
We jump back on our Velibs and head towards another spot. We get to Jemmapes to try this crack nollie over a street gap to 50-50 but we instantly get the boot from a lady who asks us nicely to come back later as she’s taking a nap in one of the apartments just above it. To kill time we wander around the neighbourhood to see if we can find any other spots, and we come across a long flat ledge with a kink on a hill, that of course does not grind one bit. The three of us (Ludo, Thomas and myself) decide to try and rub brick it without really believing in what we’re doing. After an hour of intense waxing and rub bricking, I give it a few tries but aren’t very convincing at all. At this point I have very little faith in our endeavour but Vigouz convinces me to just try a few more, and slowly the more I try it the more I realise that it’s actually kind of working, and before I know it I’m rolling away and we’re all super stoked! I really like skate missions in smaller groups like this because it allows you to really take your time and give these kinds of spots a shot.

16:00
We’re back at the crack nollie gap out to 50 spot and the lady from earlier no longer seems to be in. I try it A LOT (I don’t think I’d ever tried anything that much) but after almost two hours I finally land it. It doesn’t really get any more satisfying than getting several clips in one session; I really feel like we’ve won today. We’ve made progress on the video part, my trip to Paris feels like it was worthwhile, Vigouz has footage and Ludo didn’t end up helping me for nothing ha ha.

18:00
We hit a supermarket to stock up on supplies for the ‘apéro’, which usually consists of crisps, sweets and vanilla Coke for me (I’m not really into boozy apéros yet, although I have started making some exceptions), and we get ourselves to one of the capital’s few parks that actually has any grass left ha ha. 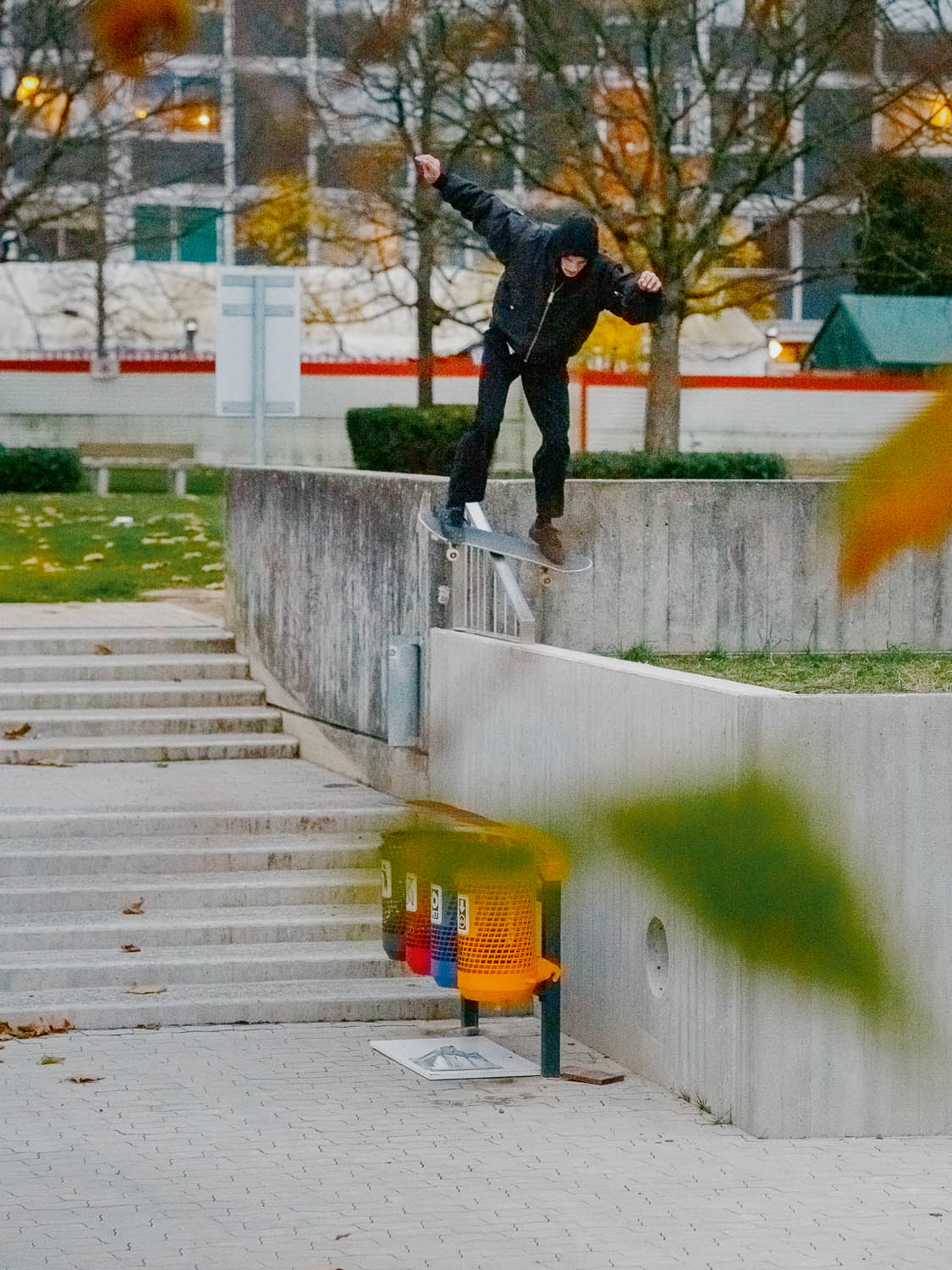 What does a typical day look like for you when you’re back in Annecy then?

08:00
I get up, do 30 push-ups to properly wake myself up (ha ha). Since I don’t have a driving licence yet I usually hitchhike to Annecy. I live in a region where you just lose track of how many expensive cars you come across and I regularly find myself getting driven into town in big 4x4s. I’m impatiently waiting for the day I get a ride from a Porsche 911gt2RS though… I’m quite into cars.

09:00
I arrive in Annecy, make my way down to the basement of ABS Skateshop to get my bike and cycle around the lake for a bit. I’m very lucky to have the keys to the shop; I kind of treat it like my flat, ha ha.

10:00
The shop’s opening time. Sometimes I’m working there, sometimes I’m not, but I’m still there anyway. I can honestly spend hours chilling on the couch watching the new Limosine video ha ha. There’s a lot of videos on the USB key and I know them all off by heart. I’m the sort of person who’ll just watch the same video a million times over. I love zoning in on all the spots and analysing every single detail to really gauge how hard some of them are, because you can never really tell unless you see them in person.

12:00
I go eat a raclette cheese sandwich with my mates. It’s a culinary specialty from around here. Trying them is compulsory for any skater passing through Annecy. The local seagulls are also really into them though so be careful if you’re eating one around the lake, ha ha. 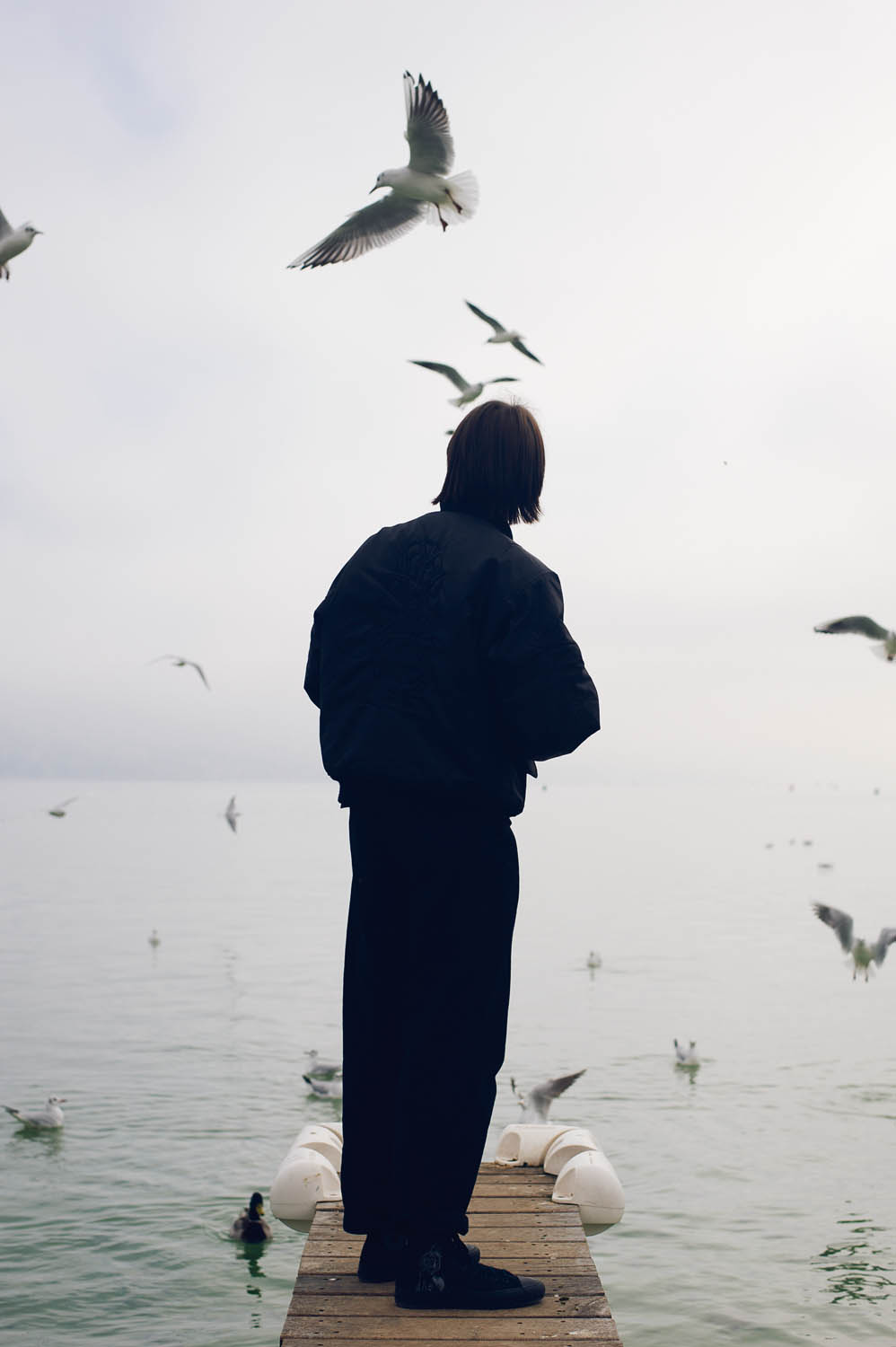 14:00
If it’s winter I’ll go snowboarding. It’s such a treat to be able to do that when it’s really cold. I haven’t been doing it for very long but what I can do already feels amazing. I live 15 minutes away from a ski resort so sometimes I even go in the evenings with my neighbour Julie Betrix (who also skates for Rave). It’s pretty incredible being up there at night when it’s all lit up…
Alternatively I’ll go and lock my back playing golf with Sebba (who runs the shop and shot this interview) and Kevin (who wrote this interview). I’m pretty shit though… Nabil Slimani on the other hand is next level; I reckon he might put out a golf part one day ha ha.
Sometimes I’ll also go skate the skatepark, but when I’m in Annecy over winter I skate a bit less, which isn’t so bad… It means that when I go to Paris I’m extra hyped.
Once the weather starts getting a bit better I’ll jump in Sebba’s van again to go skate Geneva (in Switzerland) with the OG2000 crew. It’s right next to Annecy and much better for street skating. The people there and even the police are super understanding when it comes to skating in places that aren’t necessarily designed for it and the architecture is incredible so I’m always finding the kinds of weird, dodgy spots I’m into. 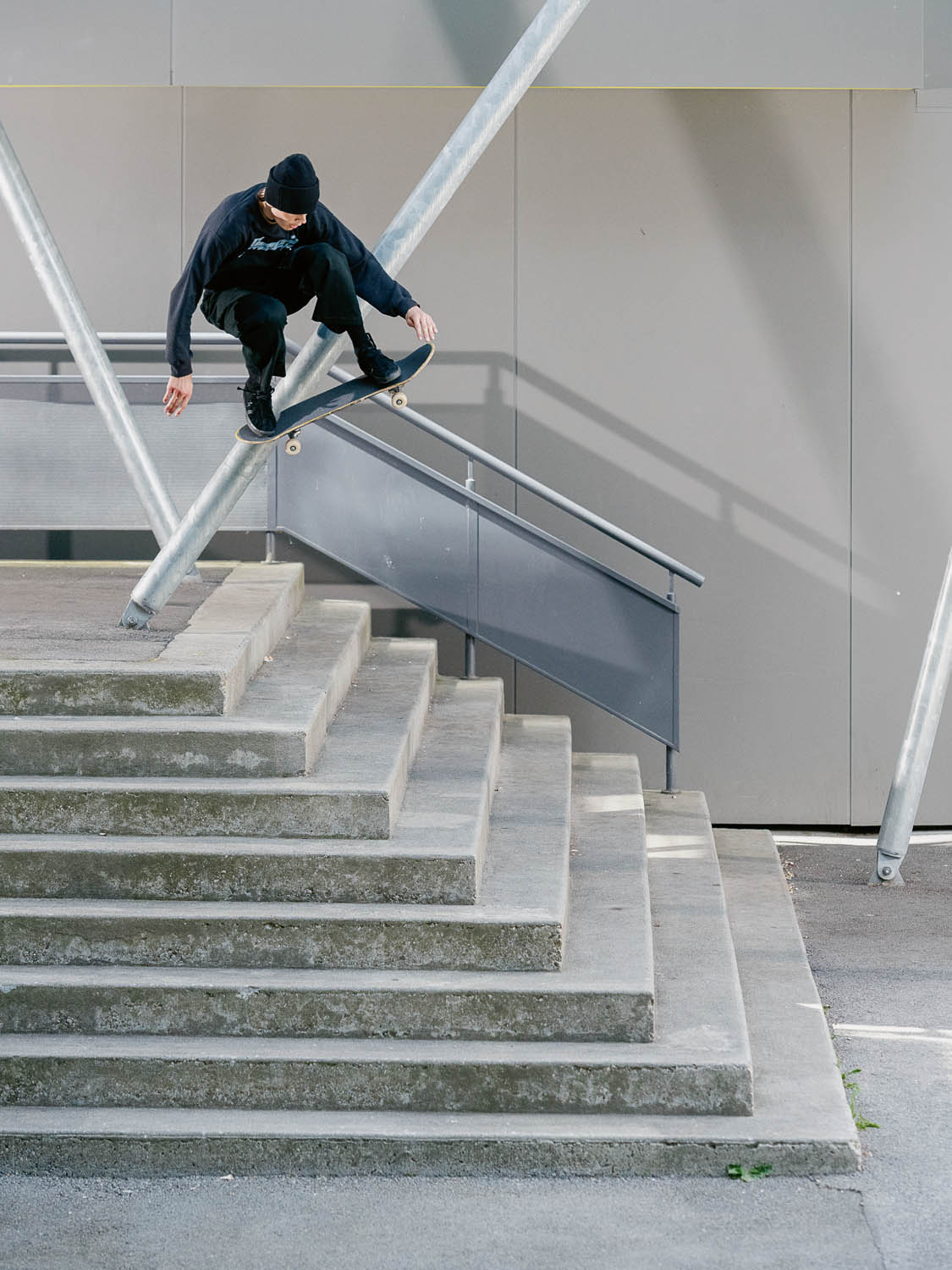 20:00
I’ll go for dinner at my grandma’s who’ll probably have finished knitting me the jumper I requested… 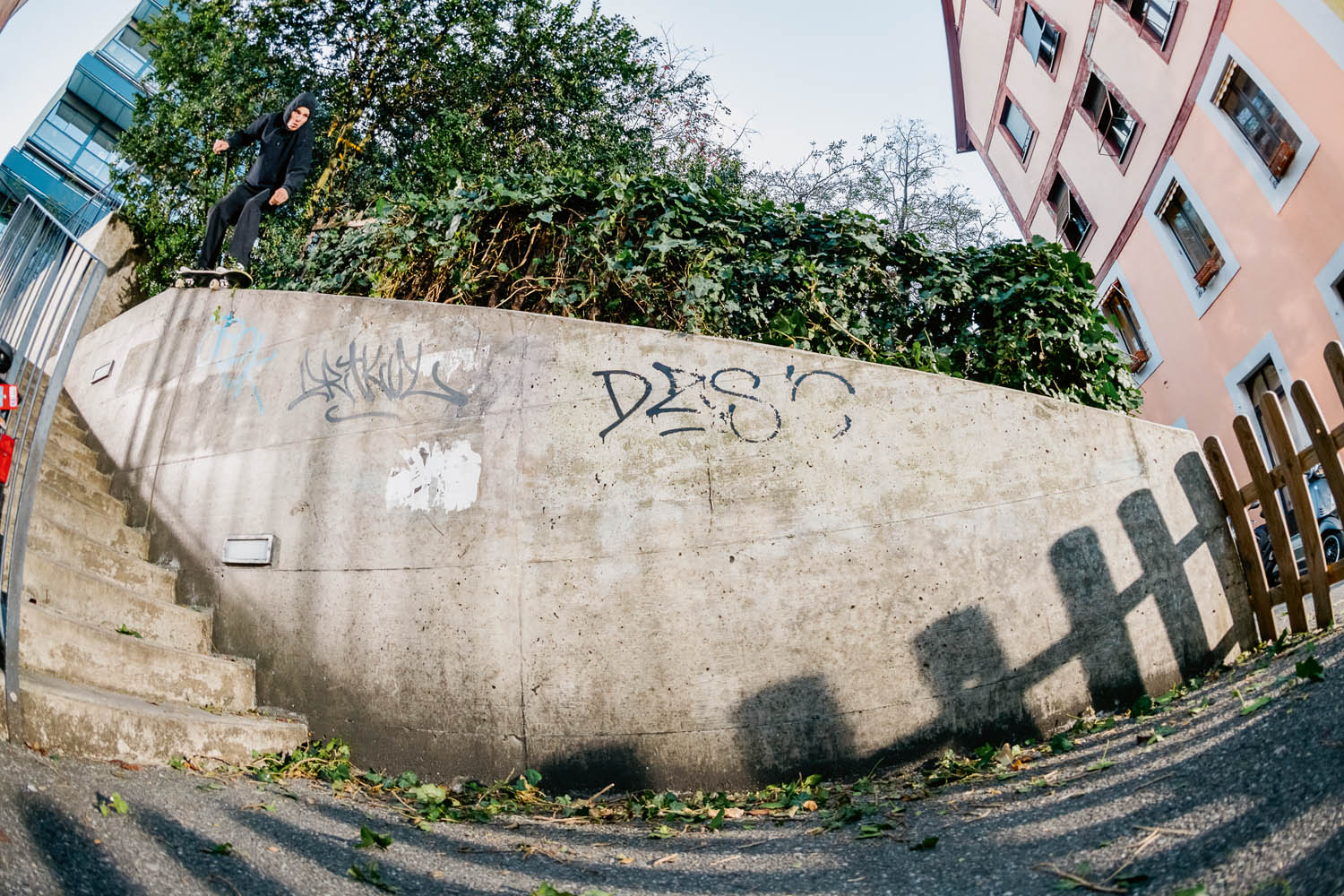