Video by Fritte Söderström. Words by Axel Lindquist. Photography by Sam Ashley (full gallery with all the photos from our article in issue 42 at the bottom of the post).

Days like these make you believe in God,
as a coincidence this proper would not be fair,
I am not a winner.

I get home in the middle of the night, drop my bags in the hallway, sit down by my desk and open up the document with my notes for this article. I scroll to the very top and find these words.
When I re-read them it takes a moment for me to interpret what I have written, way before the trip took off, actually the same day that I got the invitation.
It does sound like pure bliss, doesn’t it? Like a (quite humble) experience of ecstasy.
Did I really write about this trip, Jante – Sicily?
In a way, yes, but not a trip I had yet experienced.
Burdened with the restless premise of mankind, aspiration, the grass always seems greener on the other side. 1
Let this be yet another testimony. 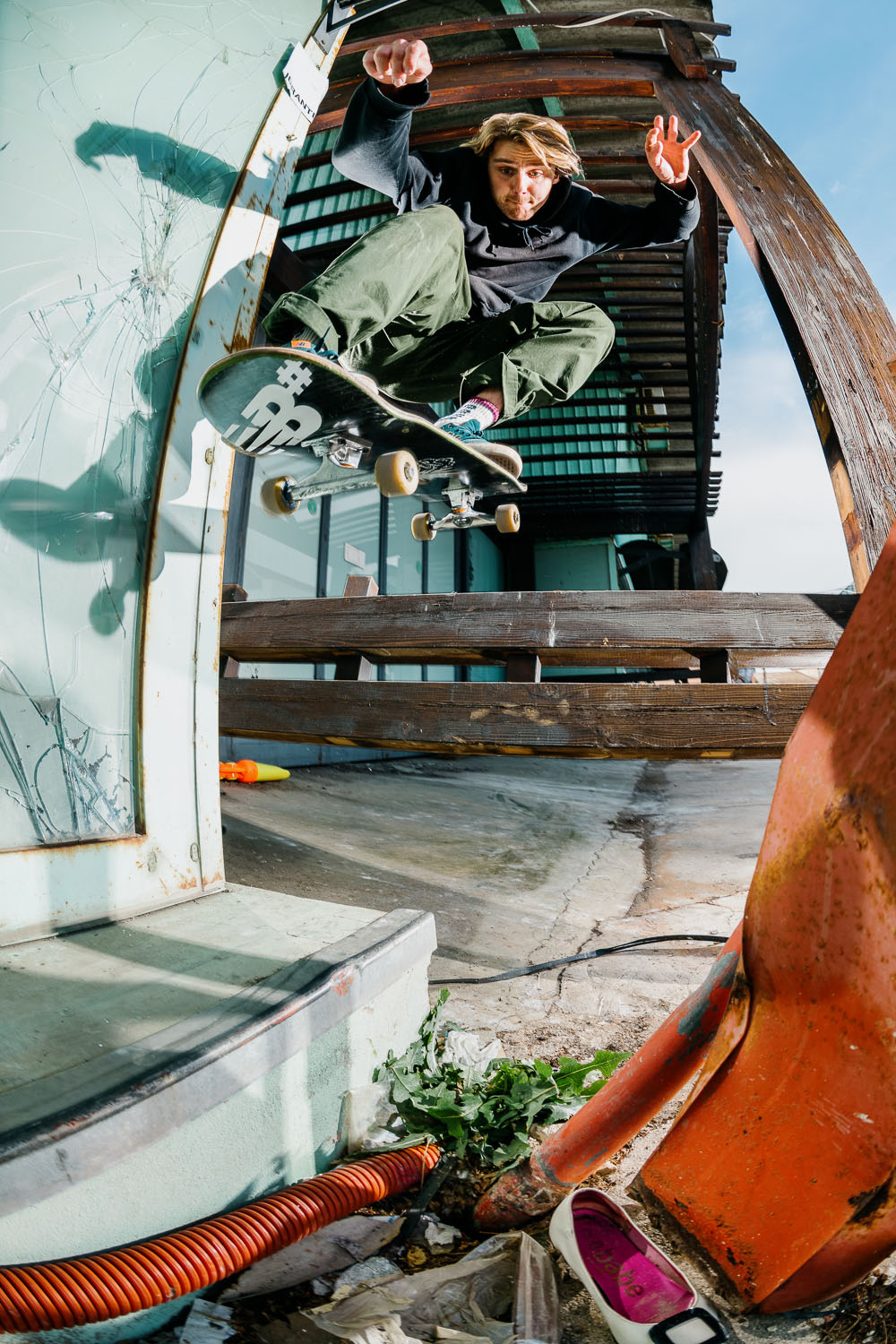 I actually started building the expectations for this trip long before the trip even existed as an idea.
Many years ago, maybe four, I had this epiphany, realising all the things I could accomplish, with all that time left to my hands, if I stopped caring about skateboarding so much.
That may be madness disguised as an insight, but I set a goal: I was done prioritising skateboarding after I got a paid trip abroad.
A sensible goal, I thought.
Then I fell in love, and love conquers all, often your plans and dreams as well.
My plan got pacified and repelled to the point that it soon felt like a secret, and on trips with my girlfriend I caught myself wishing I was in a foreign country skating instead.
In bed, occupying ourselves by wandering with our fingertips between scars on each other’s bodies, as scars are a wonderful source for stories, I constantly downplayed all the joy my old wounds actually recounted.
It felt like I lied.
So this winter, for the third time around we broke up, and for the third time I thought: ‘Now! Now is the time to focus on me!’ and as if a higher power would like to see that actually happen, soon after a secret admirer offered to pay for my trip to join Fritte and the whole Jante crew to Sicily.
A paid trip to one of those warm countries in Europe that are actually good for skating, with some of my best friends and biggest inspirations, a three-storey house with a pool, just got single and paid leave from work.
High off destiny’s perfection I was laughing at the misery in Traffic skateboards’ Rainy Days in Sicily. All honour to Pat Stiener – but that looked depressing, nothing like what our trip would be like. Clearly life had something else planned for me. 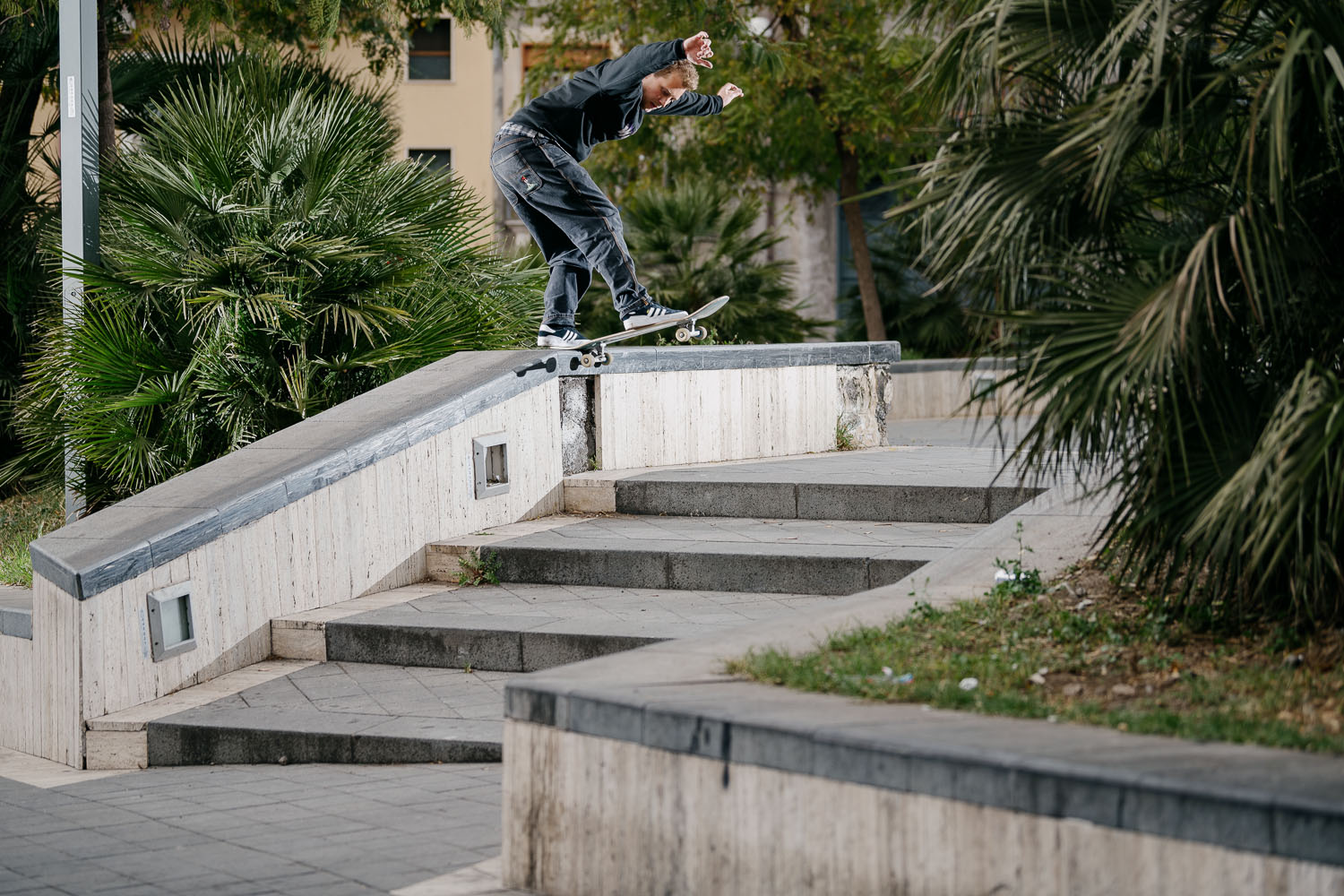 Then it was our turn.
Josef barged in from a six-week long parade for his new shoe model; Vincent came directly from months touring in Spain. Filip arrived from the world’s longest weekend in the States and Martin had spent the same amount of time locked up taking the most important exam of his life. Fritte just got out of hospital, Gustav had to push all the way from Asgård and Nisse had the snuffles.
Only me, Eric and Simon were normal, which isn’t that fun either.
I don’t know the initial state of Sam, but considering winters in England I guess he could be better off.
In short, people were tired from the start; dull weather and bad Internet didn’t make it better.
On the third morning, with the rain lashing against the big terrace outside, the wineglass still half empty from the night before, stretched out on the sheets of my king size bed, on that skate trip I dreamt of for so long, I caught myself missing her.
‘Don’t mind that’, I tried. ‘Think of what to write instead’.
I searched my body for a good story, or just something to tell, anything, but my wounds were all still far from healed.
Early on the trip I made sure to scrape my hands on one of the many hills surrounding the city.
The blood coagulated and the puss stiffened on the steering wheel in the otherwise nice and tidy rental van that I tried my best to manoeuvre in a city where damaged cars bear witness to an alternative driving culture, a culture where it’s okay for the cars to touch each other.
Repos and dents, shattered rear-view mirrors and smashed taillights, it was hard finding a car in Sicily that was intact.
We didn’t even get to spend twenty-four hours on the island before we saw a full frontal crash, on the very first spot we went to. The bystanders seemed pretty jaded, luckily it wasn’t a question of lacking sympathy, I guess they were used to it.
On the contrary the locals were some of the most helpful and accommodating people I have ever met.
When I thanked the parking attendant, ‘Thank you, thank you’, who after half an hour of hassle managed to help me pay for my parking, she smiled, nodded and amiably replied ‘Very much, very much’.
The same kind of good-natured spirit was shown to us the night that Gustav got the idea to grind the lava stone of a 700-year-old church, and the only ones who cared where the local scooter boys who were giving him encouraging applause. 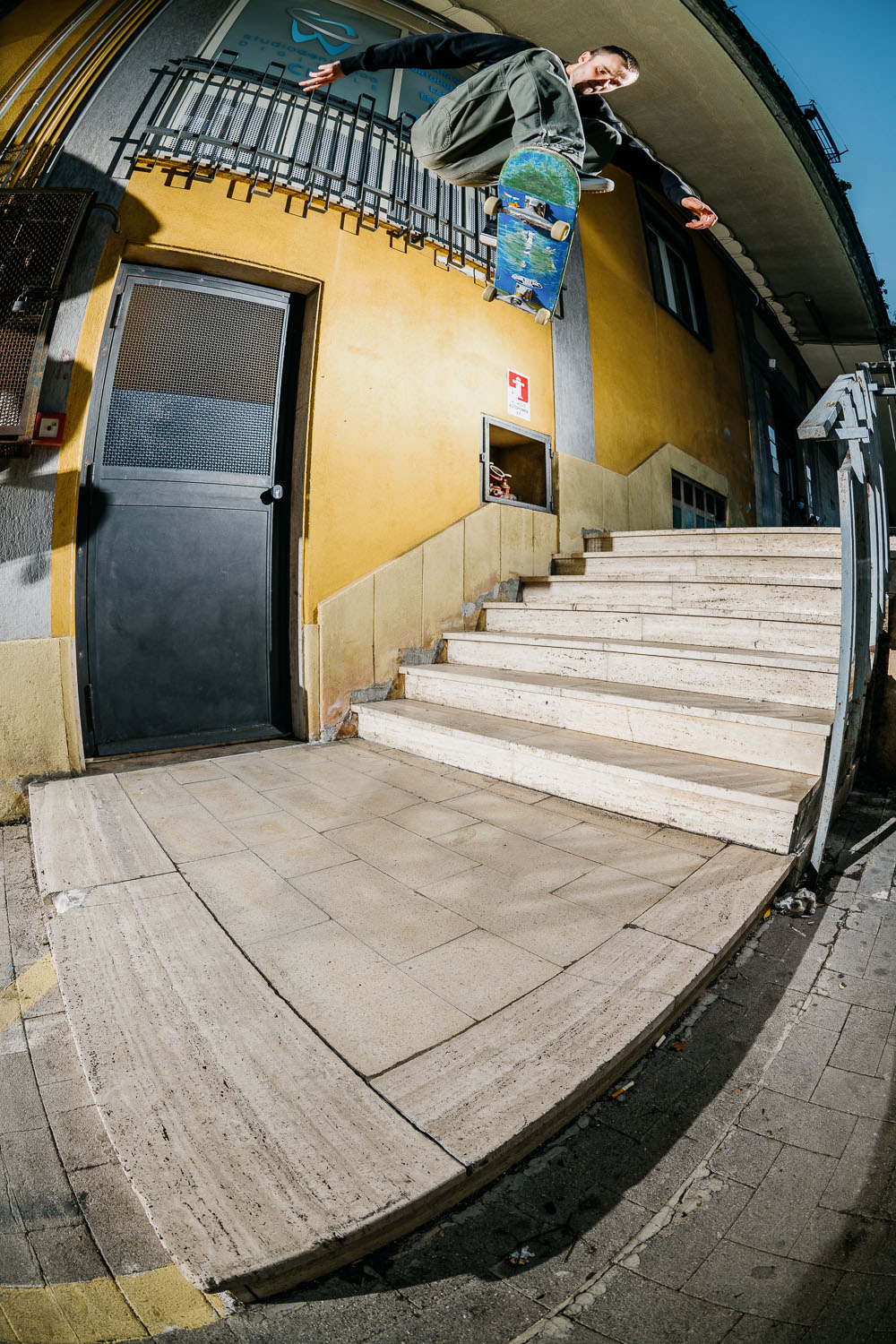 But none of this really mattered to me at the time. Because soon my wounds got infected, and my pale skin flared and started swelling around them, and I could only think of how the threat of the volcano nowadays is overshadowed by the wildfires, and that’s my fault, because I flew here. But still I’m freezing, and not even Tinder’s calm flame can give me any warmth as any other swipe appeals to donate money to an on-going war that we, with heavy hearts, ignore. I swipe left, and the sound of a thousand upset alarms are squalling all around and dogs are barking all night and Sam must hate of us for only speaking Swedish, and I worry about Fritte who drudges with his sore stomach and I worry that Simon is afflicted by the amount hash we are smoking and alcohol we are drinking and damn I must be annoying when I laugh this loud all the time and Nisse won’t think I’m cool, and of course I’m thinking of how much easier everything was with her, and I miss all my friends back home, full of fomo.
11.4 tonnes of carbon emissions worth of joy for a trip and I find myself on the toilet crying.
Thousands of euros just to find out that even the Italian food is better in Sweden.2
But I don’t want to grow bitter. I really, really don’t.
The narcissism of depression is consistent, obviously, but bitterness when you’re sad is like fiddling with dirty nails in a healing wound.
So I’m taking the opportunity to urge two skaters for you to keep track of.
ERIC HEDBERG och SIMON HALLBERG.
Of course everybody on the trip is fantastic, both as skaters and human beings, but Simon and Eric are nowhere near getting the recognition they deserve. Soon you’ll know what I mean.
Not finding the right words is a great way to not get anything said at all, so I guess this is it.

Finally back at the airport in Stockholm, while waiting for our bags at the conveyor belt, I hear Fritte say:
‘Nobody reads the text anyways. You just look at the pictures.’
‘Lucky for me’, I think to myself. ‘Because there is nothing to write about anyways.’
The bag rolls out, I heave mine off the belt and suddenly it strikes me that my hands don’t hurt. I look at them and find that my wounds have started healing.
And it’s at that moment that I began to realise, and really comprehend the curative effects of time and events, friends and experiences. 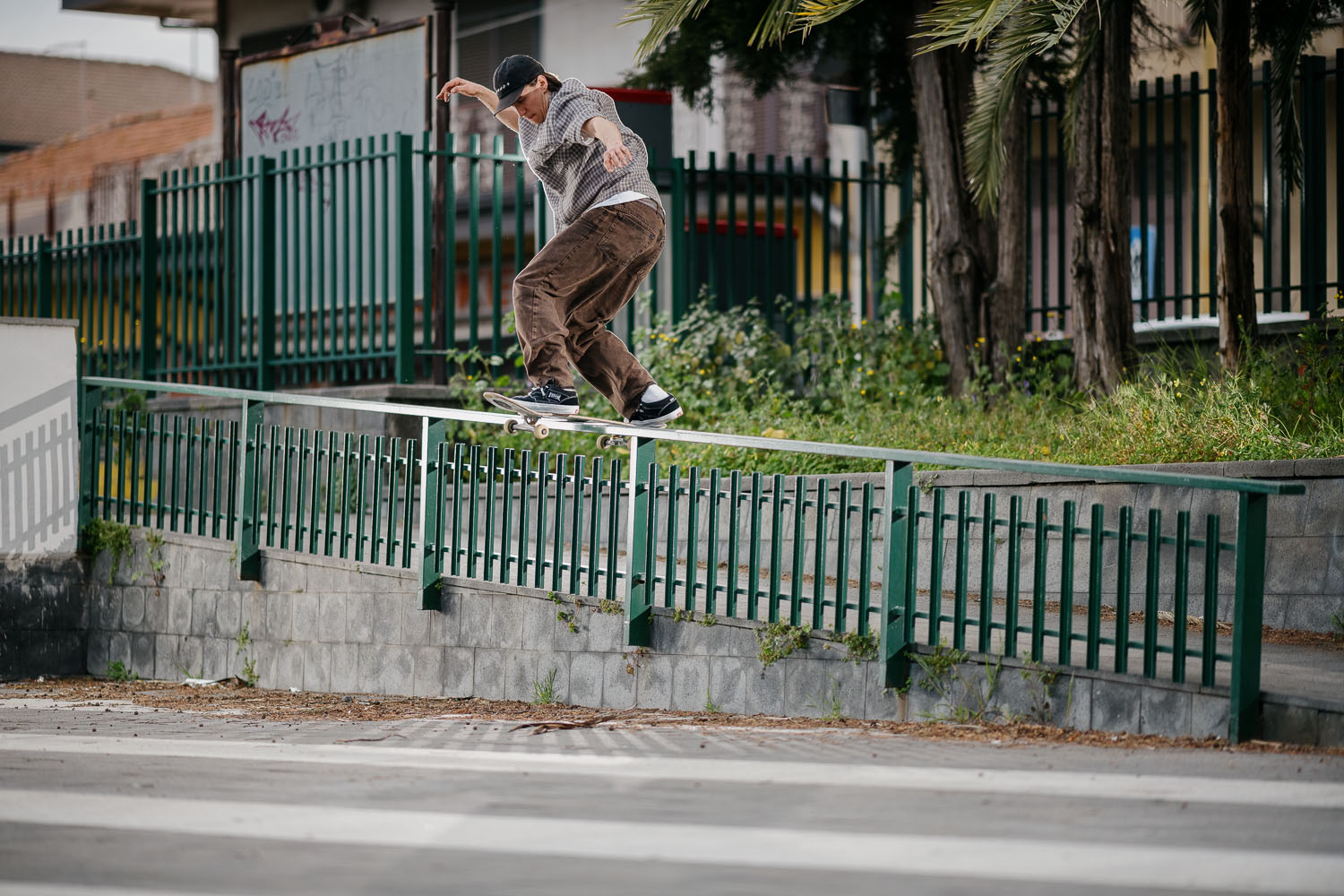 Back in Stockholm, finally at the other side again, a feeling of aspiration suddenly appeared. May it be revenge, may it be desertion, but something tells me that we should do this again.
Even though it rains, and even though the grass on the other side always seems more tempting, wounds do heal sometimes, and we really need to pay attention, acknowledge when they do.
As soon as the wounds are done healing – they will tell a story. Stories that will keep you composed, composed enough for you to once more dare see what’s on the other side. 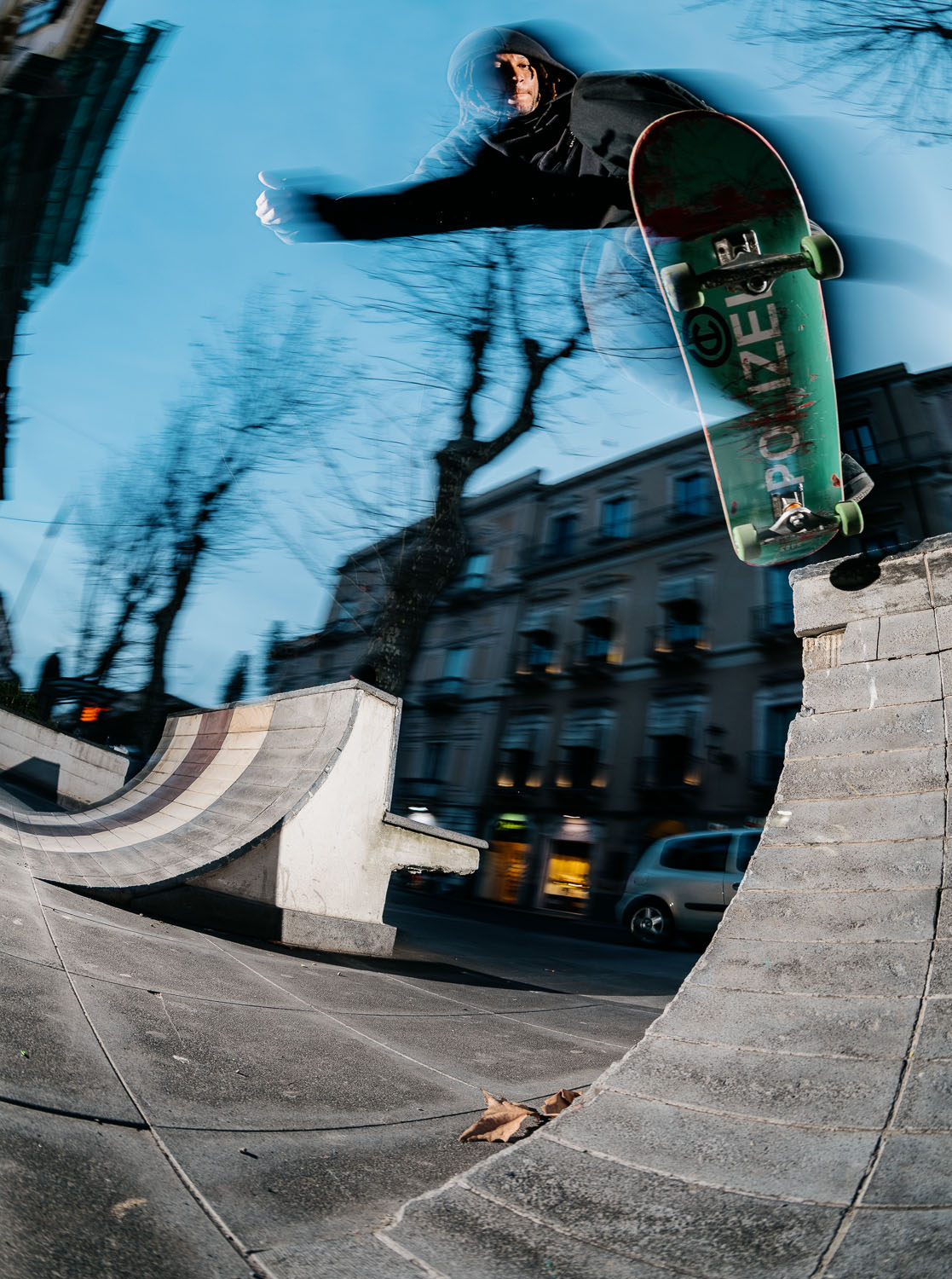 It appears that I have to continue,
I cannot stop caring about skateboarding yet.

1 Micael Dahlén’s Nextopia (2008). A great book if you want to read more about this phenomenon.
2 Mauro, this is an invitation to Sweden to decide for yourself! 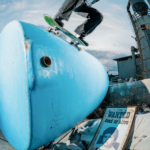 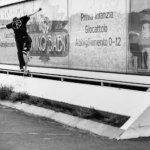 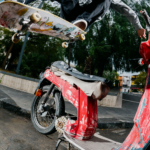