San Miguel, you know the situation 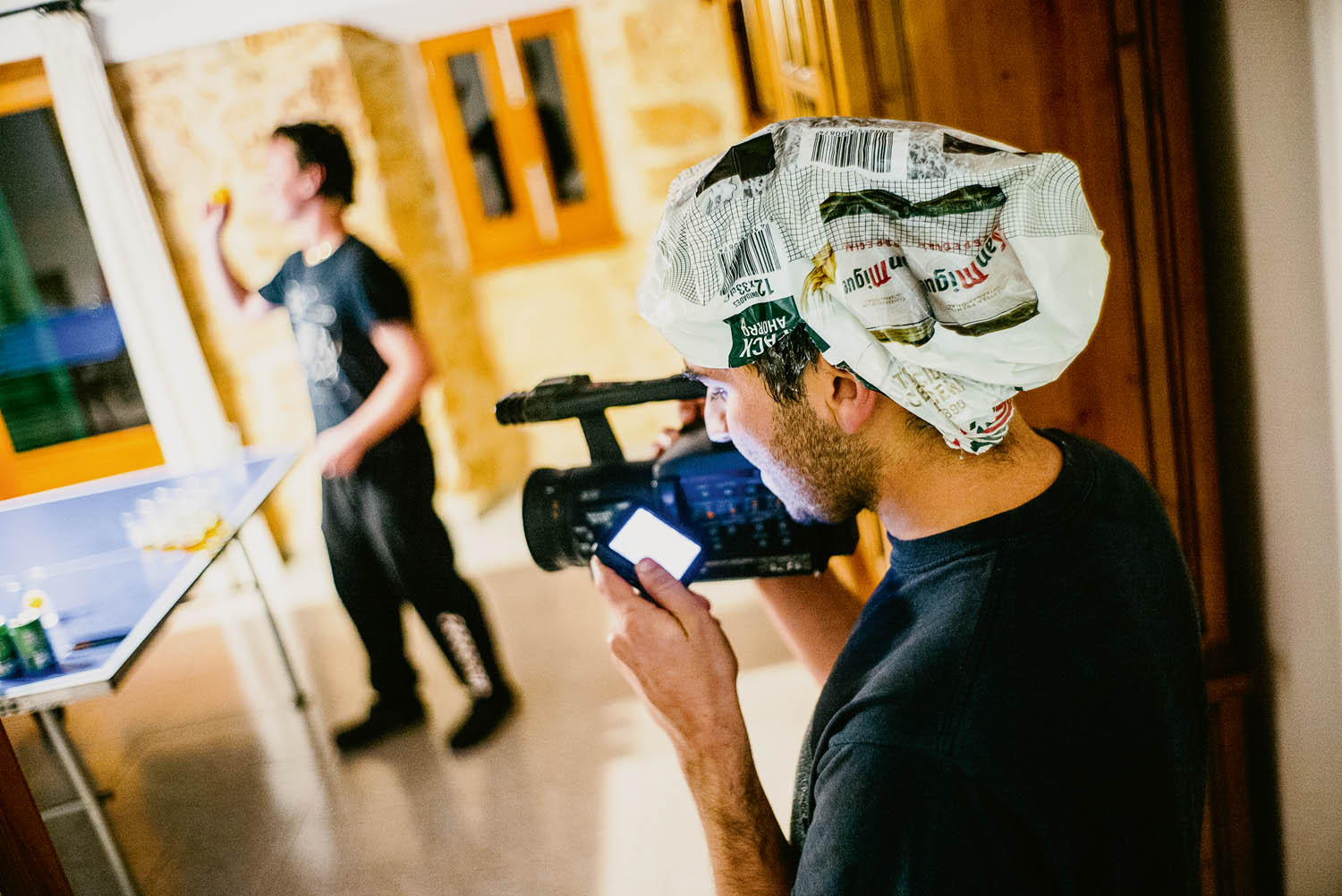 It was time to plan the first big trip since the ‘before time.’ See, in September of 2019, a plan was hatched that a loose-knit crew including Nick Michel, Justin Henry, Diego Todd, Etienne Gagne, Ben Blundell and Danny Brady would crystalise into a recurring trip roster a la what collectives like Atlantic Drift and Gronze have been doing to fomo-inducing success.
We made it to Sicily that fall, and the idea was to add some variance to that list with each trip. We were supposed to go to Buenos Aires in May of 2020. Some stuff happened on earth around that time, and yeah. Most of us were stuck in our respective hometowns for the next two years.
The nascency point of a skate trip is hard to define. Maybe it’s divine intervention, maybe someone cannot bear the sight of the same shit they’ve been skating in their city for the past twelve months. But someone must say: ‘we should do a trip.’
Truth be told, all the ‘we should do a trip’ people in our lives were out of practise after nearly two years of alternating lockdowns and travel restrictions. Thus, there was only one thing to do. It was time to ask Danny Brady.
Danny Brady started skating probably as soon as he was born. He has been to every skate trip destination ten times, with ten times as many people, and as we would soon learn, skates every spot ten times as much as everybody else. He has put these evil talents to work in recent years by being somewhat of a team manager for Palace, while also still continuing pro skater-related pursuits of his own. 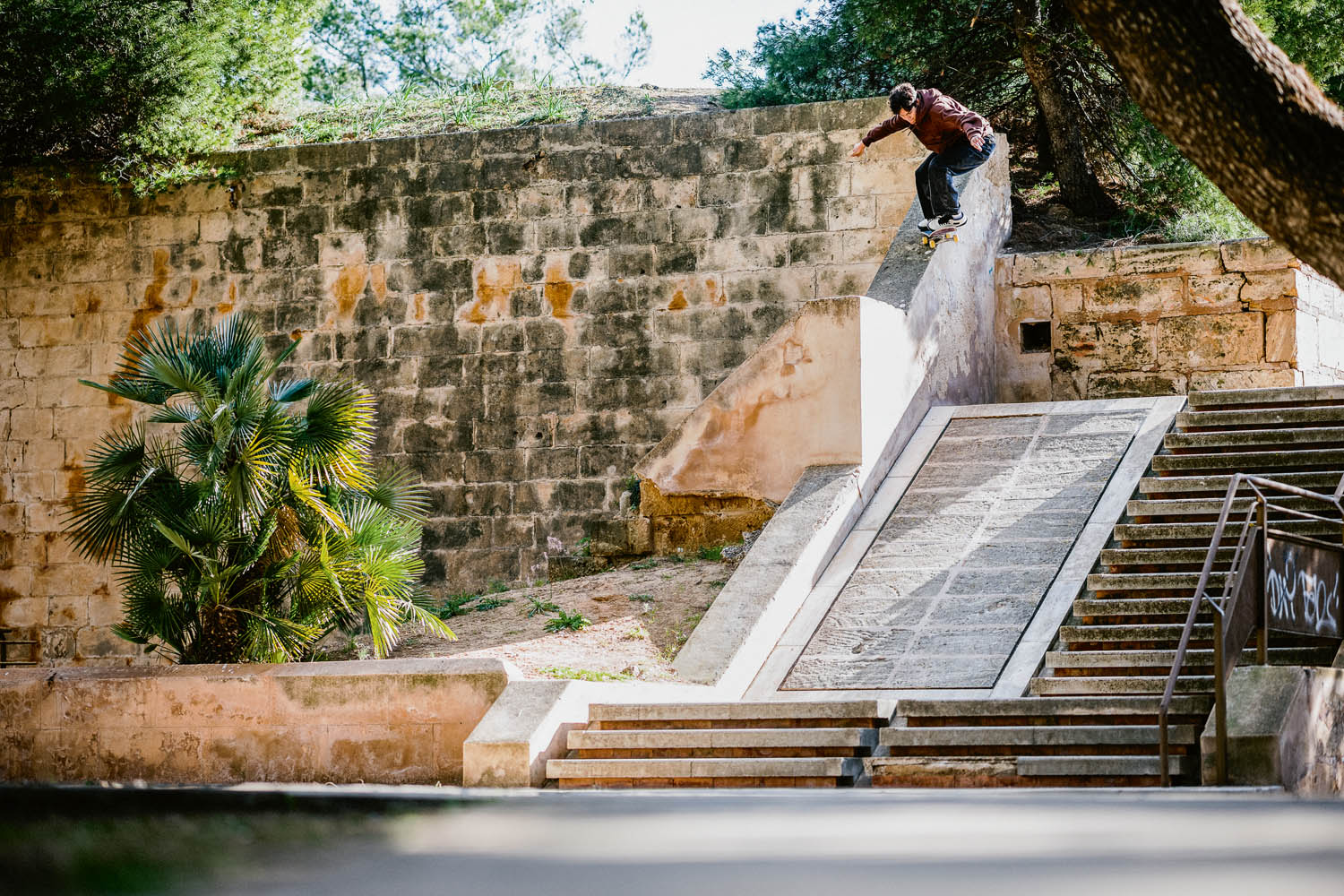 We inquired about a place that was ‘easy.’ Brady, without hesitation, suggested Mallorca, which he had already been to ten times, and as recently as the past summer.
Mallorca in January is empty, and a little cold, though obviously not New York or London cold. The island is about 15% the size of Sicily, it has tons of spots, and going from one side to the other in the same day is feasible. There is an abundance of olive trees everywhere, and once they dry out, they get used for firewood in people’s wood-burning ovens in the winter, producing one of the best smells you could ever imagine.
Our ten-person group was ill-fitted to find accommodations in Palma, an old Spanish city with old Spanish-style living quarters. We somehow found a 22-person Airbnb 40 minutes outside the city, which we would soon learn was a literal farm. On the ride in, our cab driver remarked, ‘classic Mallorca. No girls. Only cows.’
Our particular farm didn’t have cows, but did come with horses, sheep, goats, and chickens. This is perhaps the first skate trip any of us had been on where we would awake to the sound of a rooster. 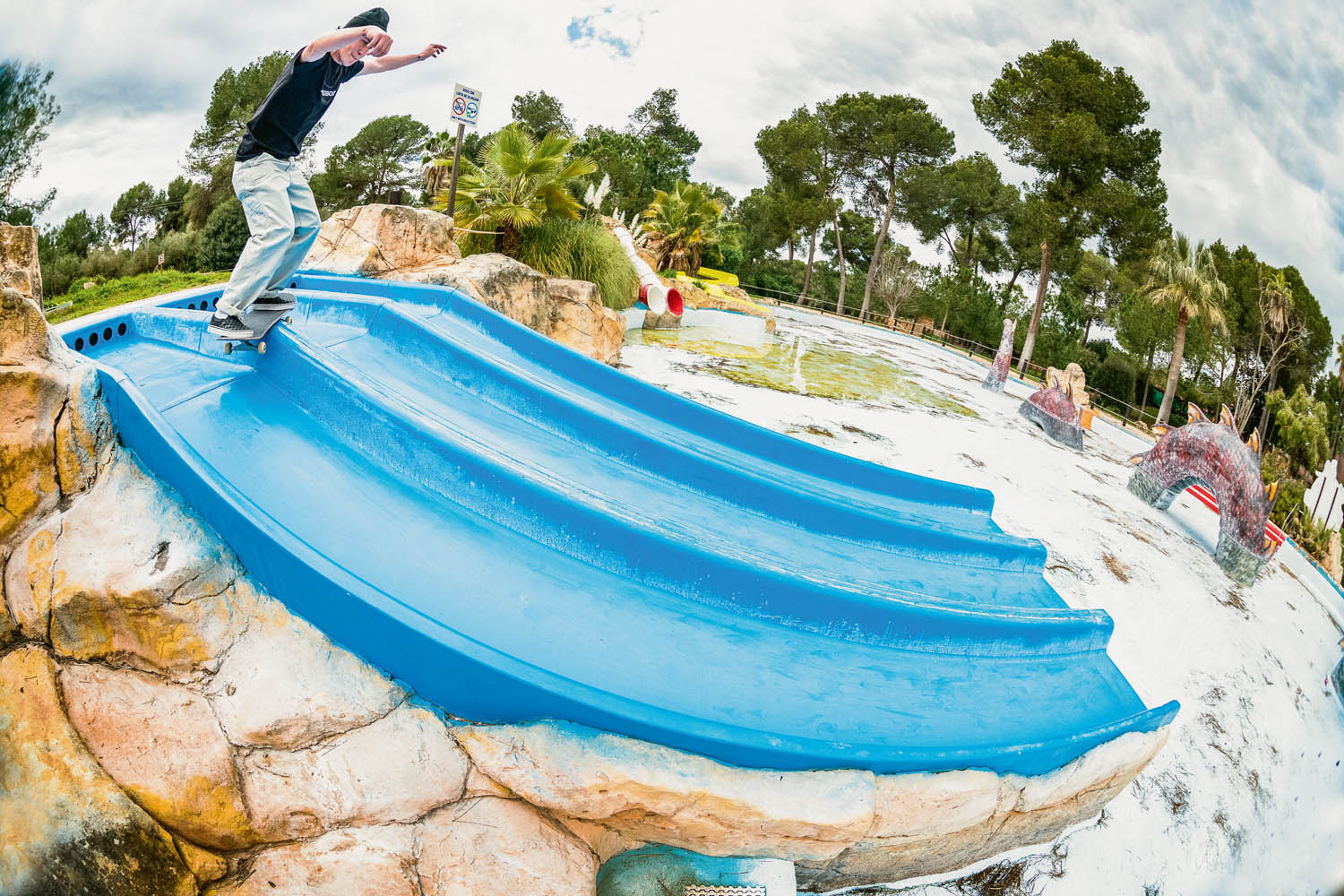 Skate trip articles often turn meta — the writer will struggle and contort their thoughts to ‘justify’ the trip as a greater quest that’s just a bunch of people trying to get clips in a place different than from where they live. Skate writing feels this compulsion to seek a greater narrative arc, a larger purpose than hucking.
If there is one eternal question that burned in our collective consciousness throughout our stay, it was whether or not San Miguel — yes, the beer — was stinkin’ or not.
Allow me to explain.
In Austin Bristow’s Portions video, there’s a five-second exchange between Rory Milanes and Lucien Clarke.
Lucien walks out of a store with a smile and an accomplished look on his face — the look of a man who had just bought beer.
‘What kind of beers did you get?’ an inquisitive Rory asks, out of frame, presumably holding the camera.
‘San Miguel, you know the situation.’
Before Mr Clarke is even able to finish the final syllable in the word ‘situation,’ a profound sense of disgust shifts over Mr Milanes’ intonation: ‘Awww, San Miguel!? Stinkin, man!!!’ 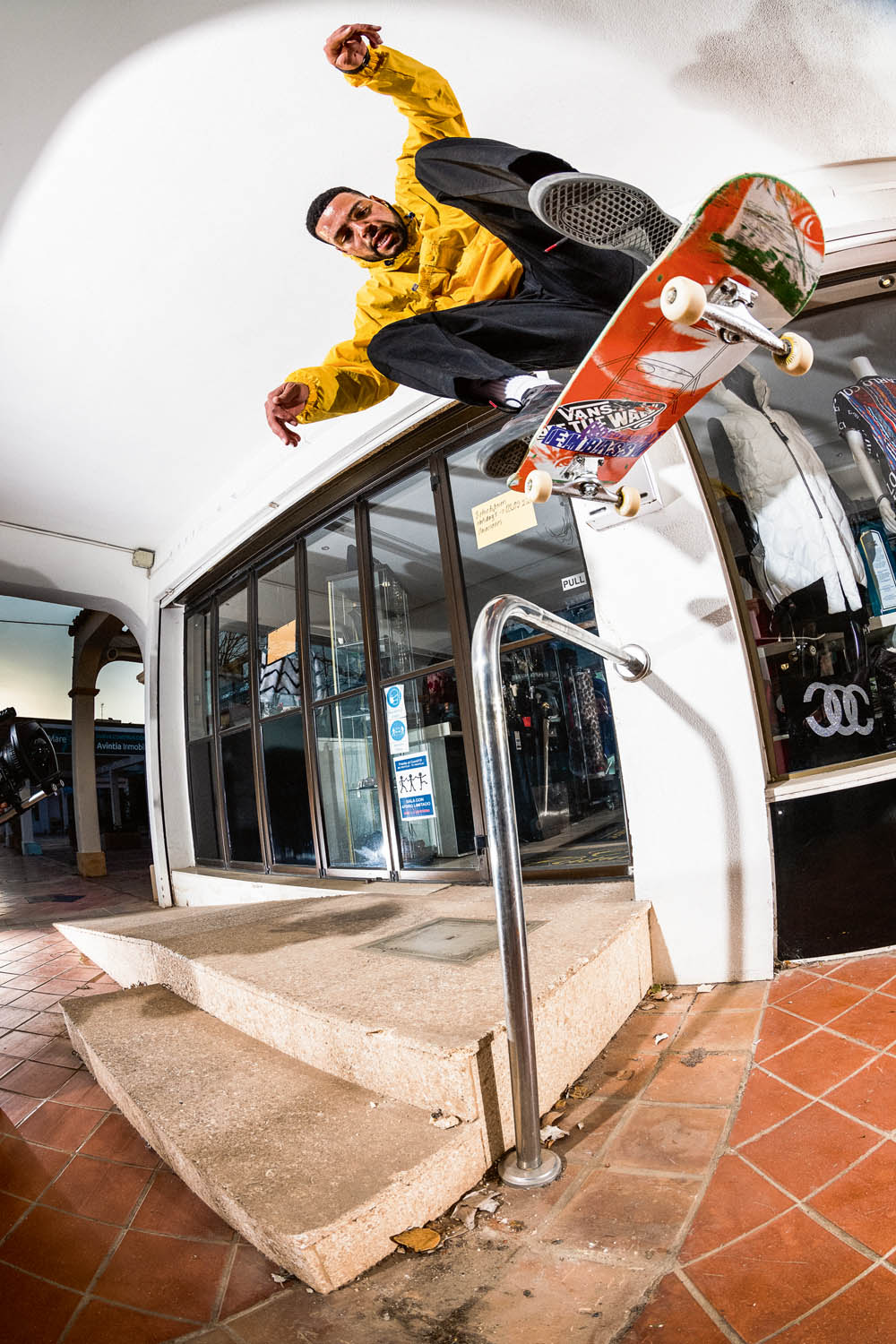 Now, what does this have to do with anything? Nothing really. But this seemingly meaningless bit of Portions managed to stick to our minds in a way that random bits of skate video ephemera have a way of doing — though they are more potent when you’re younger. Skaters of a certain age could never forget the iconic ‘Muska. Sup dog. Some handrails? Oh shit.’-exchange from Feedback. I have a friend who would always utter Dylan Reider’s refrain from A Time to Shine that ‘it’s better than flipping burgers, I guess’ anytime somebody expressed frustration with their skateboard. Do you have any idea how many times somebody said ‘Danny Brady is a wanker’ on this trip?
And San Miguel is everywhere in Mallorca. It was impossible to see the logo without hearing Rory’s anguish in your mind. Or maybe it was a way of still having him there with us, because he bailed on the trip at the very last moment. The only iconography that rivals that of San Miguel on the island is — oddly enough — Satan. 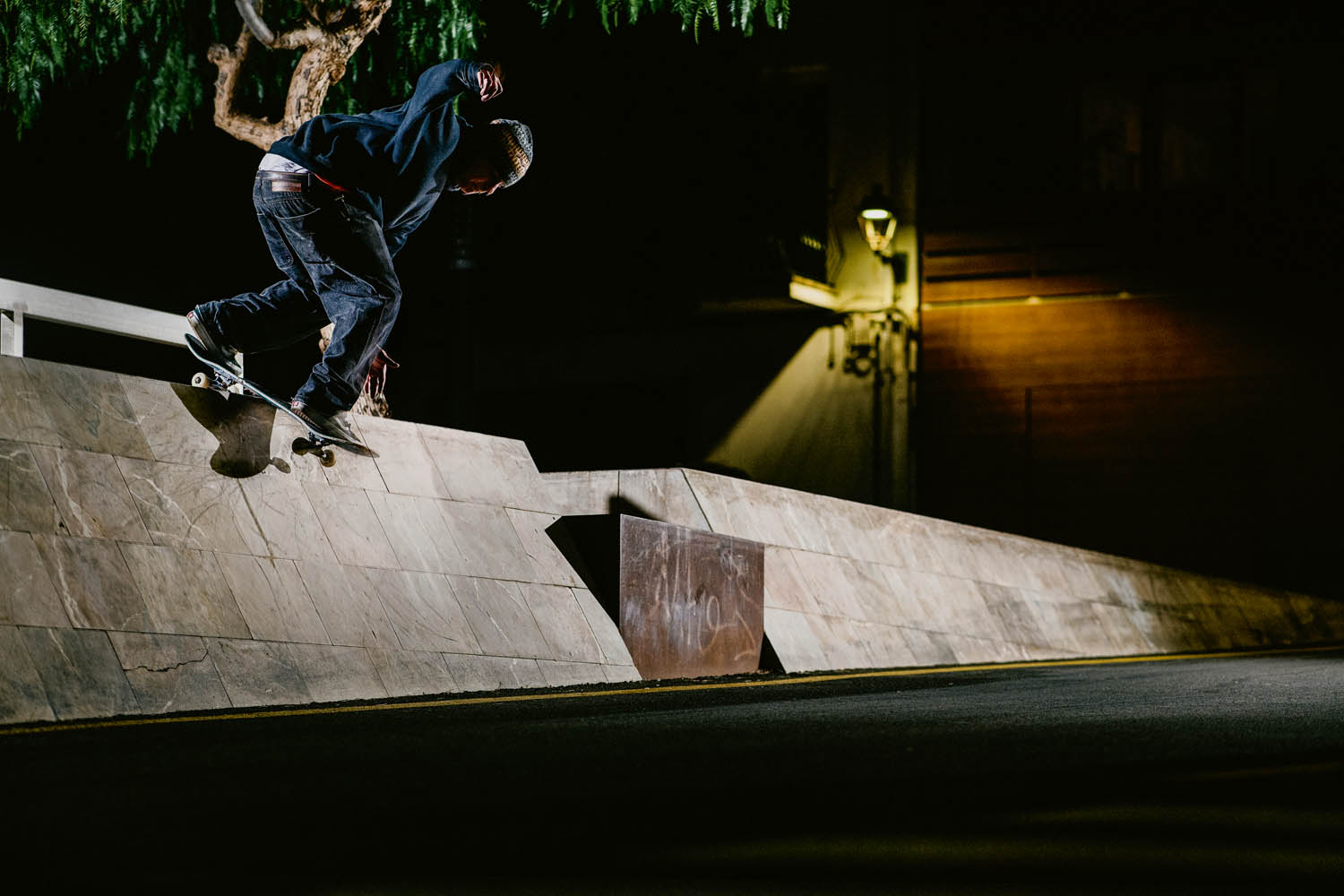 Apparently, we were there for the Feast of Sant Antoni, the patron saint of animals. And as you could gather by the aforementioned Airbnb, our four-legged friends are everywhere on the island. Sant Antoni was an ascetic Egyptian monk who lived by himself in the desert. No Instagram, no San Miguel, no girls, not even cows. The devil would show up in various forms to tempt him with his satanic lures to no avail — the 4th century equivalent of not falling victim to a phishing scam.
The people of Mallorca celebrate this historic defeat of the devil by dressing up like him and lighting bonfires. All the children were running around in devil horns. The church had a literal neon outline of Satan, in addition to a statue of him next to the bell. It was an abbreviated festivity on account of Covid, but Satan’s lying ass face was hard to miss.
And what better metaphor for a skate trip? Here you are, somebody paid to film tricks on a skateboard, constantly tempted by various nefarious deeds and liquids. Those who thrive beyond the temptation earn sponsorships, Ferraris and glory. Asceticism becomes a road to success. 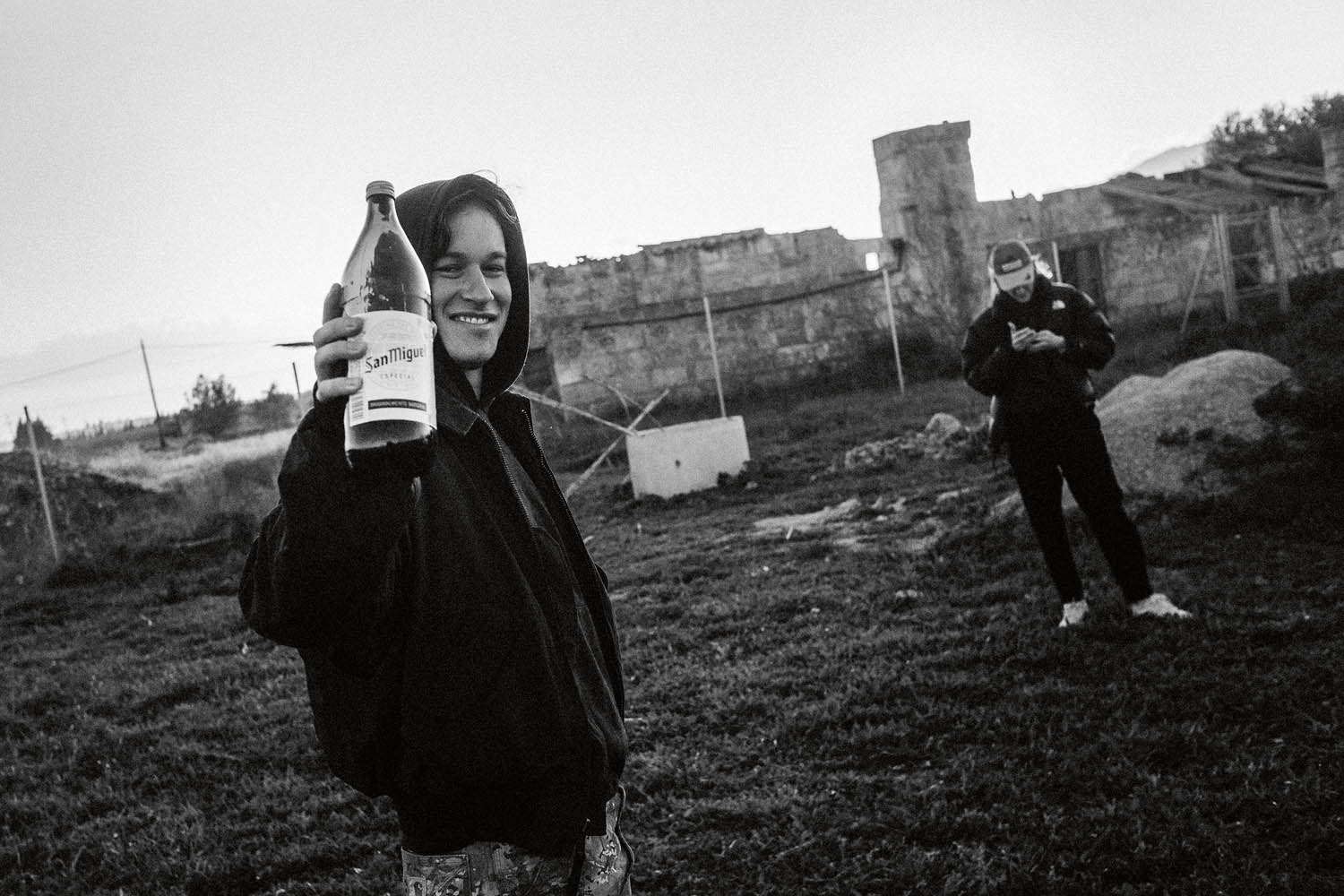 Back to San Miguel, the tempter at hand of this particular trip: San Miguel isn’t even stinkin’. I could think of five beer brands that regularly sponsor skate events that are far more objectionable. We even tried to get a curious local, who was enthralled with Justin Henry’s battle with a bump-to-bar, to say Rory’s line, to which he replied, ‘San Miguel? No, San Miguel is good.’
To further how analogous our particular situation was to that of Sant Antoni — Mallorca is a desert in January. Some of the resort towns famous for catering to British and German tourists were devoid of a single open store or restaurant. The hotels felt abandoned, though they were only awaiting the next tourist season. We even had free reign over a water park, still partially filled with some of 2021’s now-green pool water, which E.T. rolled into for the bargain price of 100 euros. Had all of us not had gone through 2020 lockdowns in our respective cities, this would have felt like skating in the part of a zombie movie before shit gets bad. Instead, there was an eerie comfort with all the desolation, which would not have felt far off from the experience of anyone who ventured into a downtown during the first months of the virus ruling over our lives. 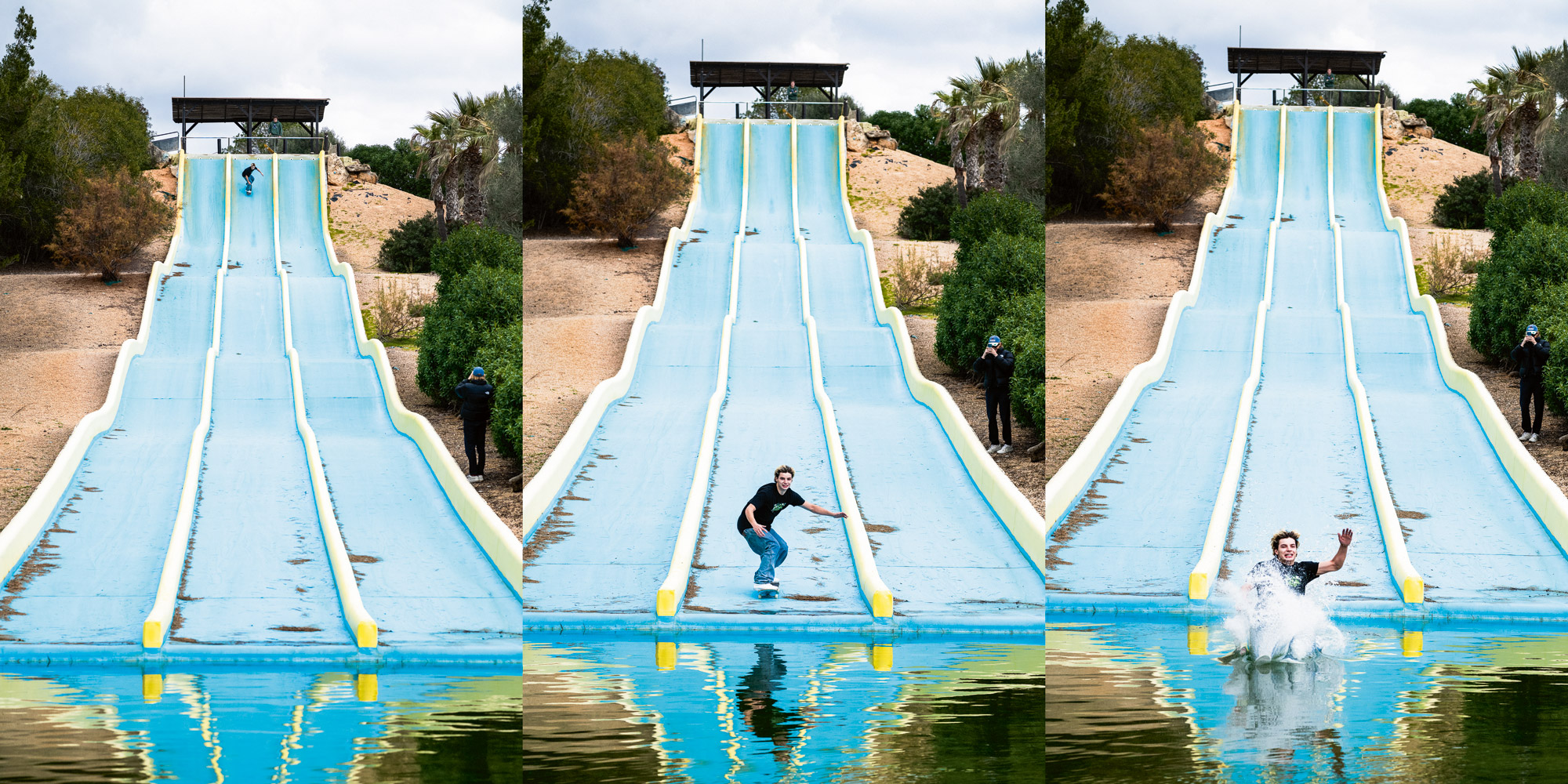 Our guide was Tolo Carbonell and his ten-year-old son, who also rips. Brady has known Tolo since he was 17, and got a copy of American Psycho back from him on this trip, which he had loaned Tolo 15 years ago. It was through his OG expertise that we were able to navigate this Balearic winter desert of skate spots, secret fence openings, and surplus of mini hubbas.
The spots in Mallorca branch far beyond the central plaza in Palma that the island is most known for. I think more than a handful of us expected to get stuck there for at least three of our nine full days — which is standard protocol for any trip with a big crew to a place with a Really Famous Skate Spot™, but no, we managed to avoid yet another temptation.
One of the most distinct stops of the trip was a corner of baby blue and royal tile banked waves in Palma, with a thin volcano structure at their centre. It had apparently been a five-second bust before Covid, but became a five-minute bust in recent times. Nick Michel 5-0’d and smithed the top of the volcano on our first visit, until the threats of cops coming from a local restaurateur became too annoying to deal with. We returned a second time, and the same guy, now feeling emboldened, doused the main bank with soapy water. We were 1-1. 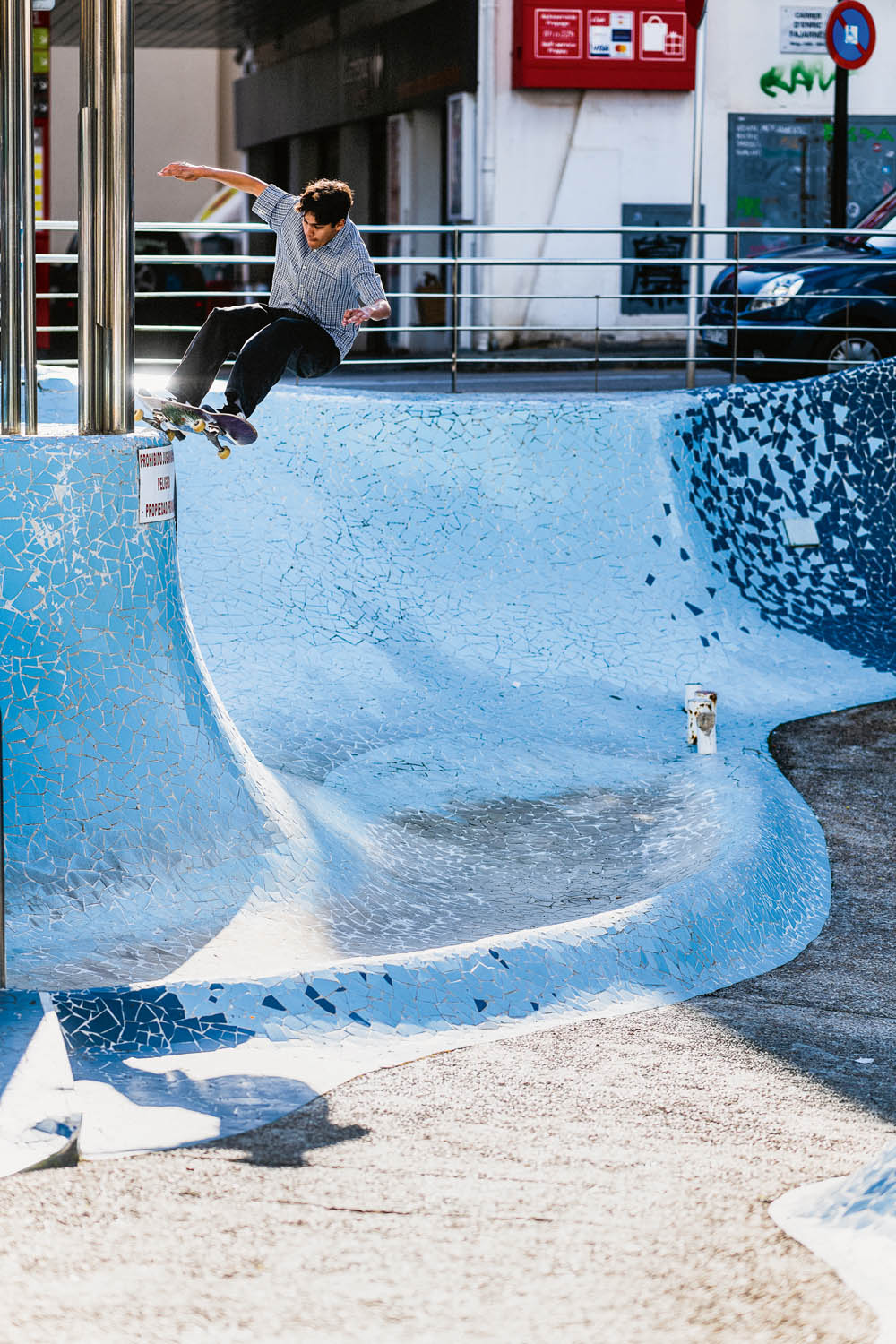 Little did he know, there’s this nifty little trick called ‘Google,’ which reveals any business’ closing hours. It was the final spot, on our final day, and Nick 50-50’d the top bar — something that had not even seemed possible the first time we came — while the soap man was nowhere to be found. 2-1. We won the series. 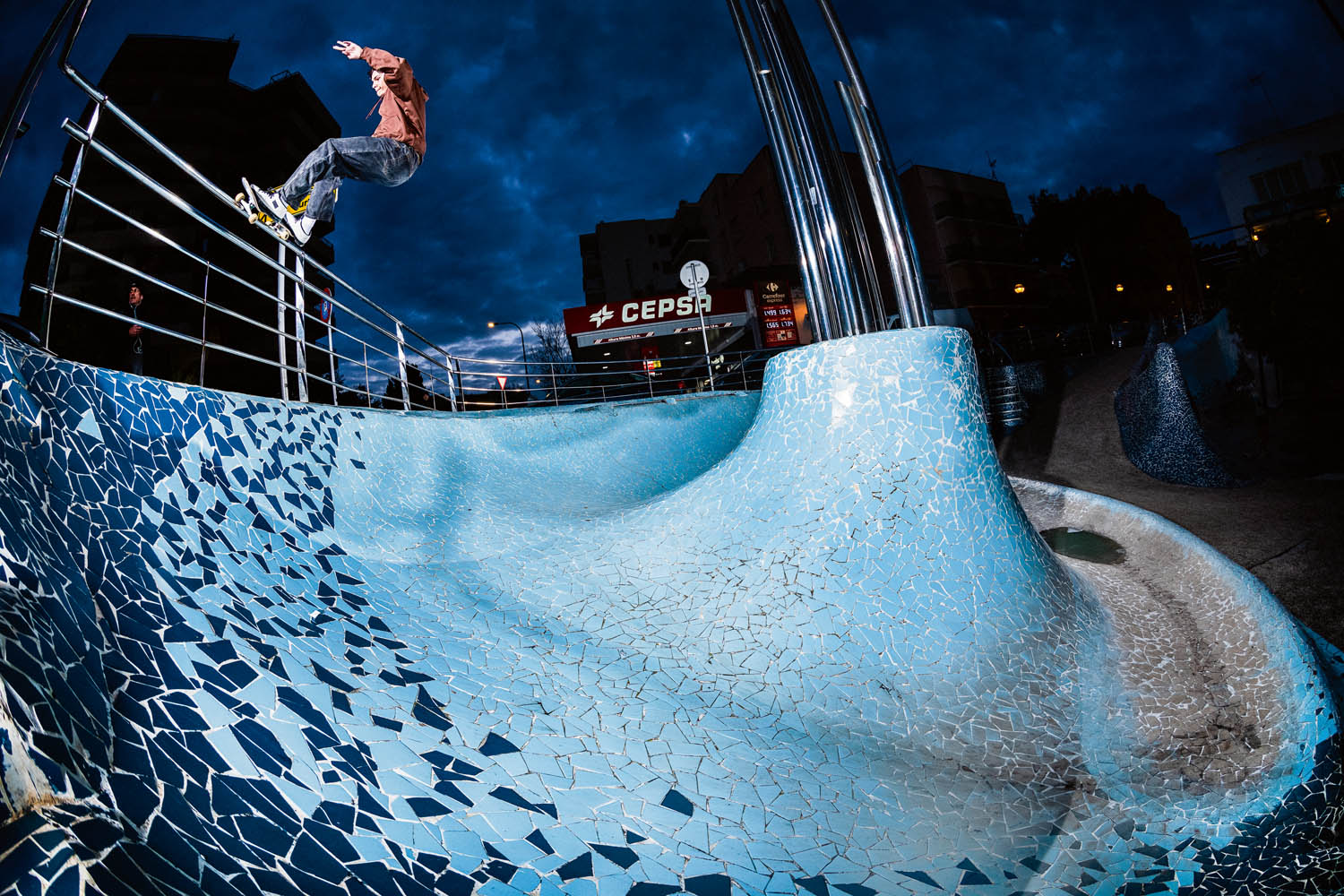 Yet this was not the most triumphant return of our journey.
Ageing is one of life’s great inevitabilities, and experiencing it feels like one endless succession of being unable to do the things that once came easy to us: touching our toes, levelled switch flips, staying out until 4am for five nights in a row. Ever the daredevil, our TM felt compelled to test fate.
On one late afternoon, we found ourselves navigating a windy road between empty low-rise hotels that had been taken over by stray cats. At the cul-de-sac, there it was — the hubba from Brady’s first-ever Blueprint ad, which ran 20 years ago. He had returned to find the answer to the eternal question we all face at some point: ‘do I still have it?’
Much had changed in the economics of skateboard photography since it was valid to run a noseslide down a nine-stair hubba as an ad, but this was not about the skateboard media ecosystem. This was about a man proving to himself that his noseslide prowess from two decades ago was still intact. 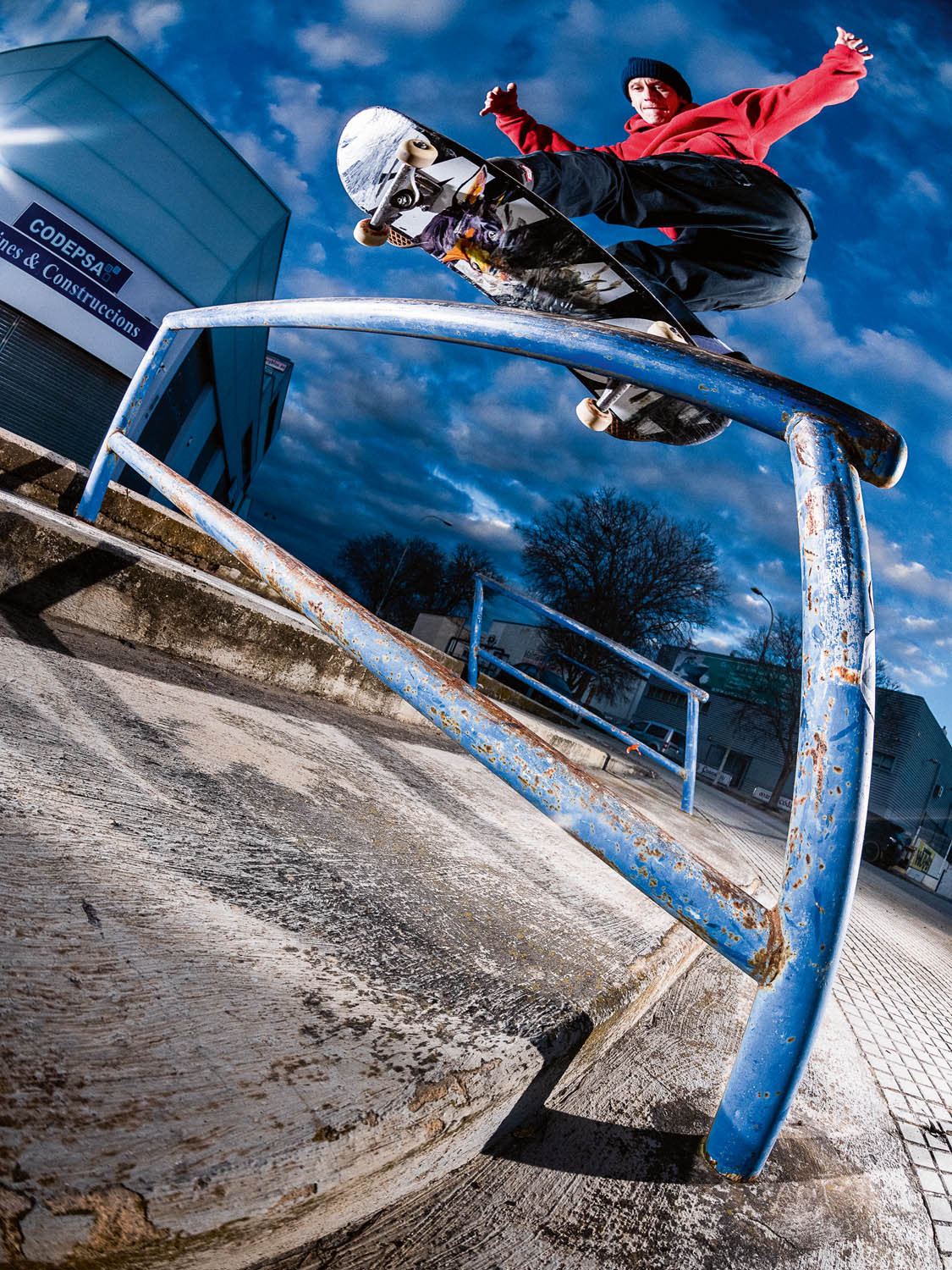 The clouds closed in as we pulled up, thunder roared. None of the 20-somethings on the trip felt any interest creating a sub-plot beside what was clearly between Brady and the hubba he had conquered in his youth.
On the first few tries, the short runway proved tricky. On the next few, the fact that the hubba had maybe not been waxed since Blueprint was around created a new variable. Soon enough, he was sliding down. A try later, he rolled away. We all put a reminder in our phones to return twenty years later to witness the same feat for a third time. It wound up on the Quartersnacks Instagram, only for people to remark how misleading the fisheye had made the size of the hubba look back in 2003. Whatever. Like you never used the magic of lenses and camera angles to make something look bigger than it actually was. 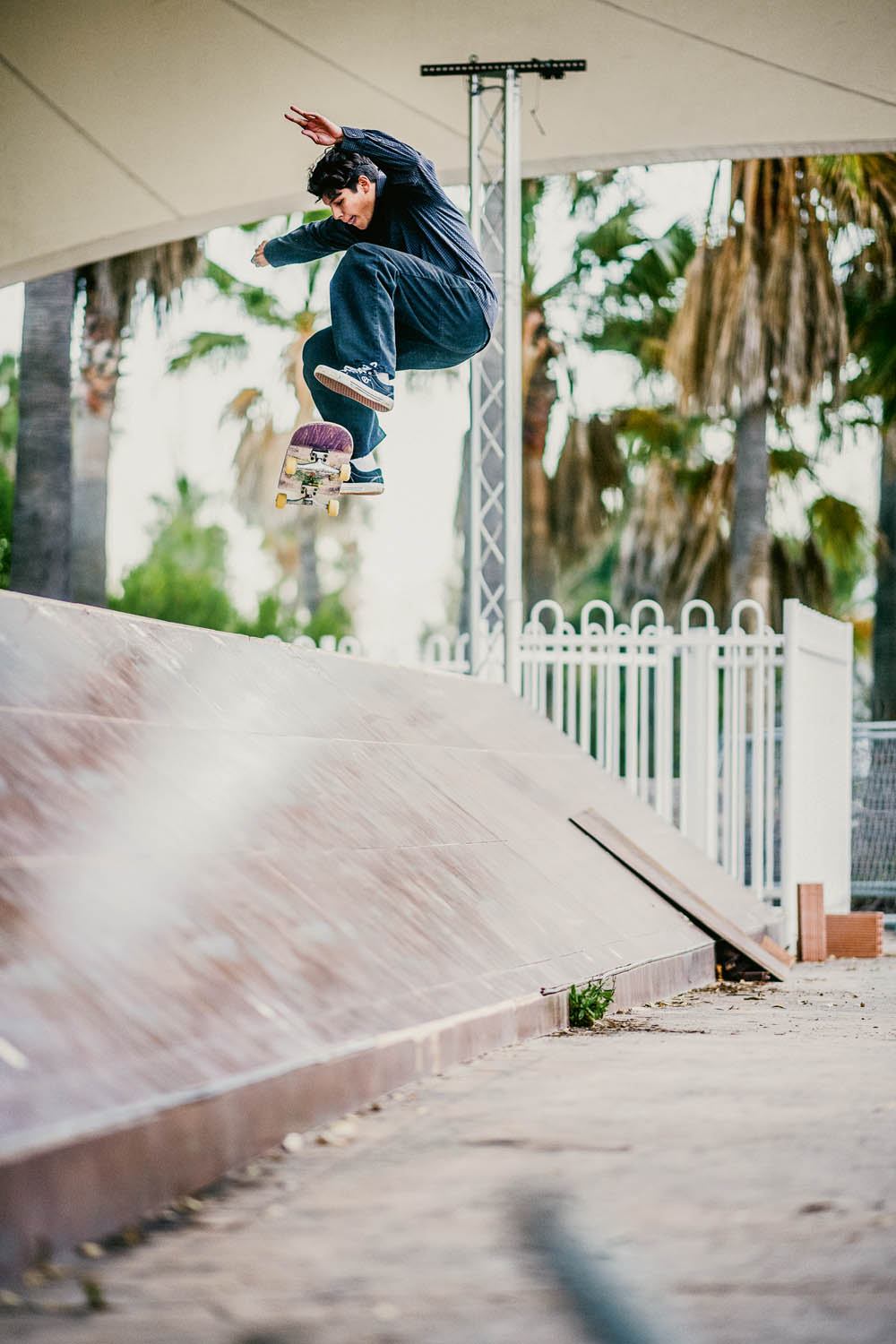 Satan had proved no match for our steamroller of productivity. The raw timeline for the trip wound up in excess of 20 minutes over the course of nine days. Nobody got injured, though Diego’s foot was gushing blood after climbing up a cliff on the return from a cold plunge into the ocean. Everybody tested negative on the way back, and it didn’t rain until the day we left.
As for San Miguel… was it really as stinkin’ as the clip in Portions led us to believe? We decided to leave it up to the will of old fashioned democracy in the form of an Instagram poll. After 24 hours, the results were in: 32% in favour, 68% stinkin’.