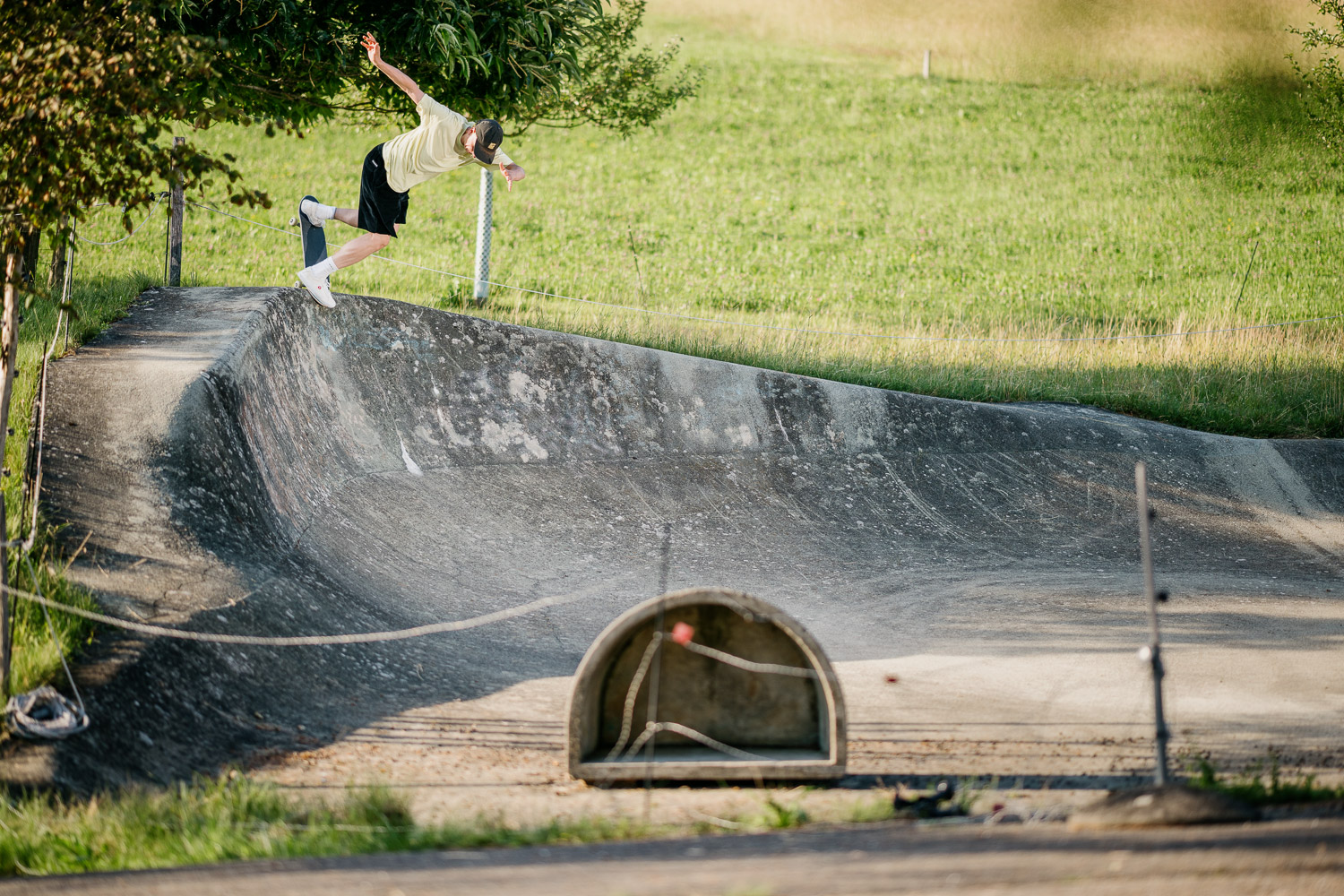 Just got back from 10 days of driving around Switzerland with the crew we selected to film for our Vans collab edit, and I can only equate the state I’m in to the feeling of clumsily staggering out of a club, completely bewildered that it’s fully daylight out in the real world. What even happened in that time warp? How did that fly by so quickly? The memories you have are great ones, but they can’t quite be pieced together in a chronological or even remotely linear fashion. It’s just flashes. You’re completely frazzled, there’s no doubt about that, but there’s also a deep sense of calm that comes over you as you accept the extortionate charge on your Uber home. It’s over. There’s nothing left to chase. All you can do is wait for the hangover to kick in, which in the case of this trip is probably more of an emotional one than a booze induced one. Although the fact that Bobaj (our Swiss filmer and selfless legend of a tour guide) and myself did experience exactly what I described above on our last night/morning in Zurich might explain my lingering headache… But I think we’ll get to that later. 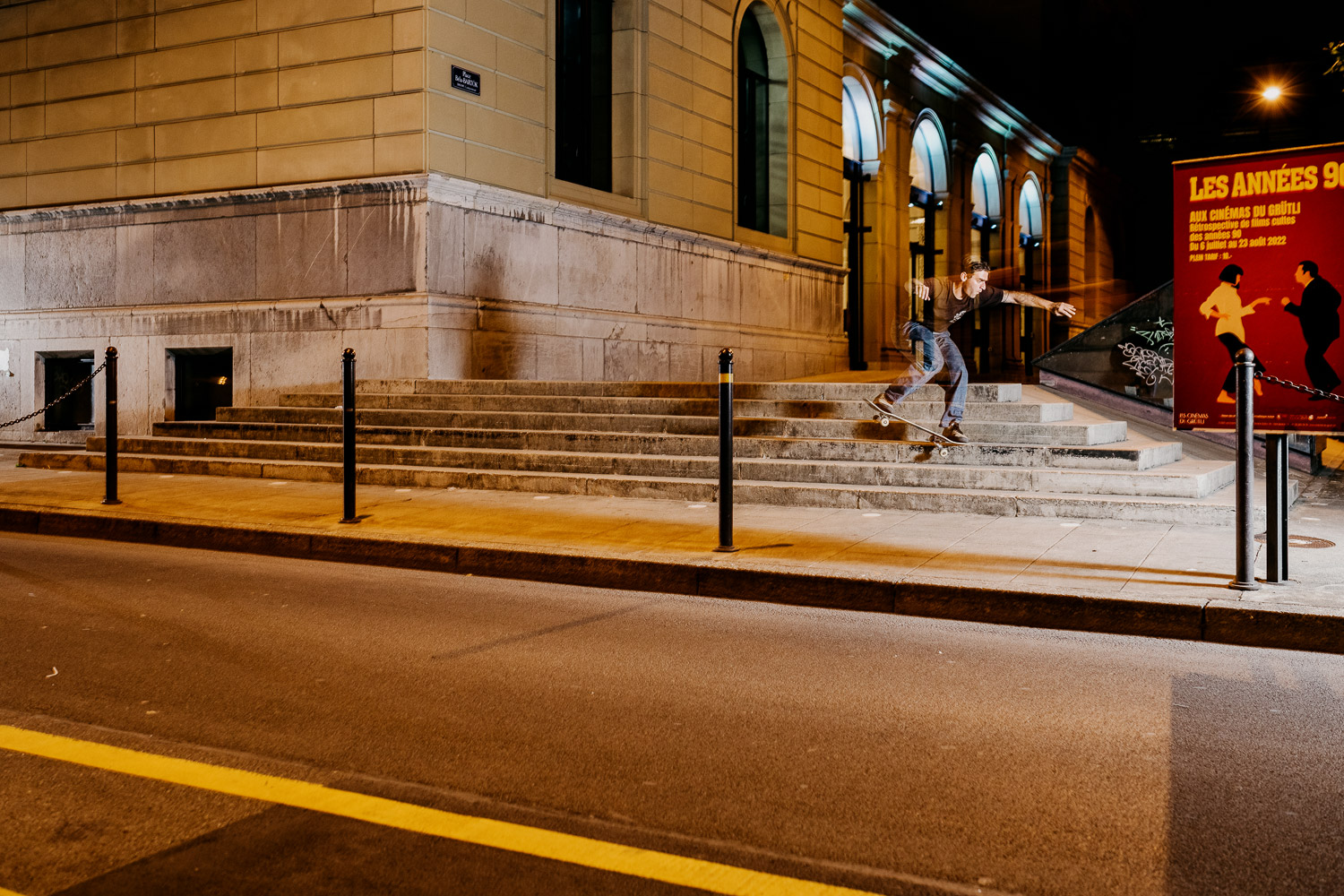 ‘Krrrrrrrrrrrrrrrrrrr’. How the fuck is anyone even considering standing on their skateboard after all that cheese? What’s wrong with these people! It’s about midnight on day seven, I think, and as we finally manage to tear ourselves away from the chairs of the fondue restaurant we’ve been sessioning for the past two hours we hear Notis having an actual session of the four wheeled kind on a long three-stair directly opposite where we were eating. And by ‘long’ what I mean is that to get to the end of it and gap out past the three he was charging towards these crooked grinds like a Busenitz chased by hyenas. Pretty certain I’ve never seen anyone’s trucks travel that fast across any kind of ledge. We all instantly forget the mountain of Gruyere we’ve just ingested and start waxing frantically. Bins get moved, the Cave Valaisanne’s staff finish locking up to come join the hype train, and before we know it it’s decided that this single would actually be converted into a line. Bobaj is clearly running on emergency energy and looks more and more like he could collapse with every push, whilst Jon Wolf, our other filmer (who is now completely delirious) is overheard saying, ‘if this wasn’t so fun this would be horrible.’ A line that still cracks me up every time I think about it, but also isn’t even remotely close to being the most fried thing he said on this trip.
I’d say that was the turning point. On adventures like these there’s always a moment when everyone just starts to let go. You give up on keeping track of what day of the week it is, you forget what was landed yesterday, and the day before, and the day before, and accept that you can’t keep up with whether they speak German or French in the Swiss city you’re visiting (or in Oscar Candon’s case which city that even is). Suddenly it was all just one big blob of memory, full of fluffy green mountains, quaint cottages, turquoise lakes so fluorescent they almost look radioactive, frantic, infectious laughs and unbelievable skate spots. Because yeah, as you can probably tell from the photos, Switzerland possesses an endless amount of skateable terrain of the absolute highest calibre. I know it’s shameful but the abundance of banks and natural transitions was such that even though skating was all we cared about at that specific point in time, it became hard not to get desensitised and remember that 15-foot oververt quarterpipes don’t usually live in the streets.
This shift was also marked by what I can only describe as ‘the sip too many’; AKA the one that makes you wonder if the delicious Quöllfrisch beer cans you’ve been drinking all week were in fact just filled with the spring water drawn on their label; the sip that makes you begin to imagine what life might look like if you were the cheeky little legend drawn in front of the Alps on that same illustration; if rather than being obsessed with kickflips all you cared about was yodelling and bopping around valleys in traditional Swiss attire, a Bernese mountain dog and a cow as your sole companions…
I think the only thing able to snap me back into the present moment at that stage was a loud voice behind me asking ‘where’s my board? I might plant a seed!’ Pfeeew, I was back in the room. Only now I was giggling at the fact that I’d fully accepted that trying to film a trick would no longer be referred to ‘getting that bread’ but ‘planting a seed’, and that in the process of growing this forest each and every one of my easily excitable travel buddies had slowly but surely begun to lose their tiny minds in unison. 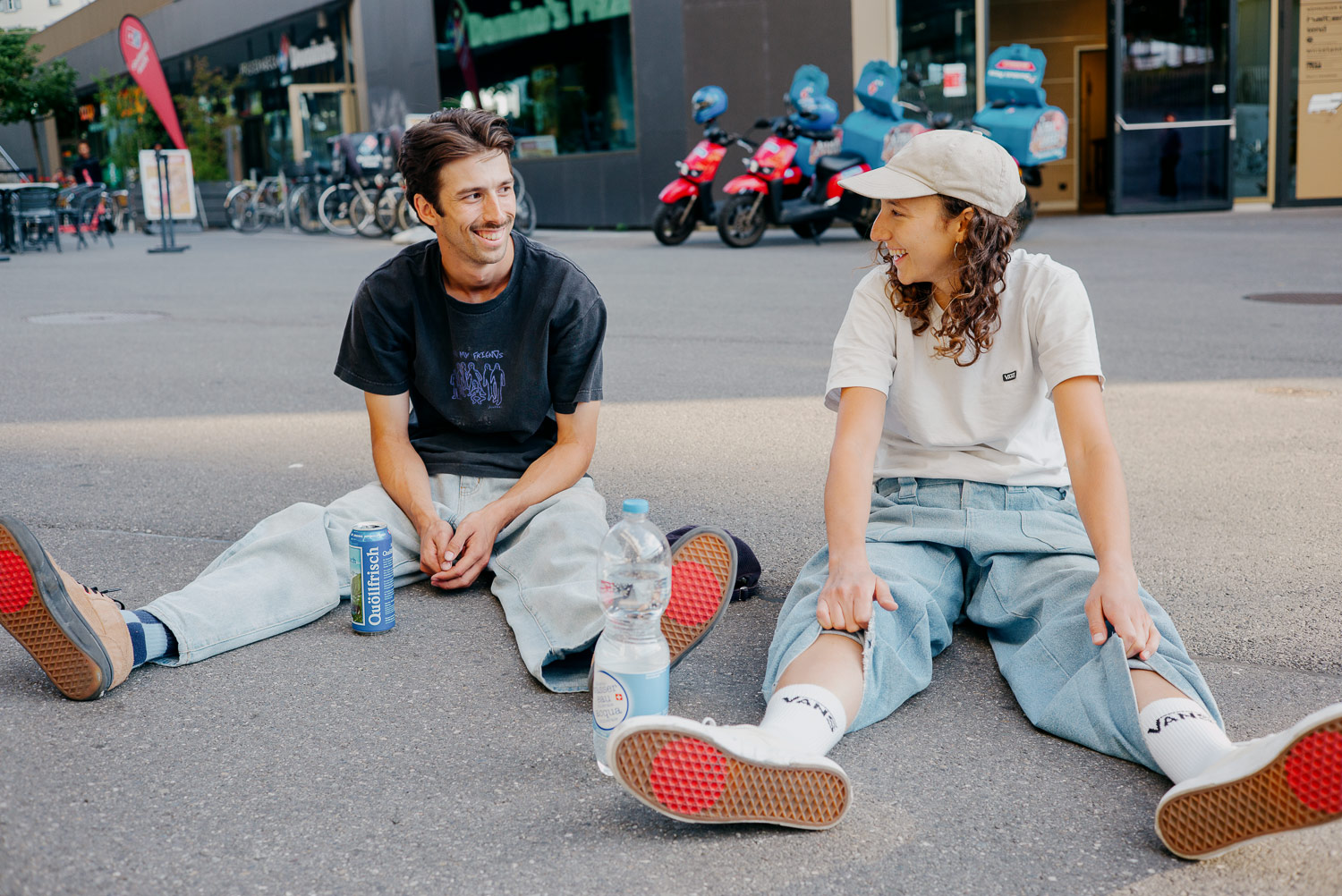 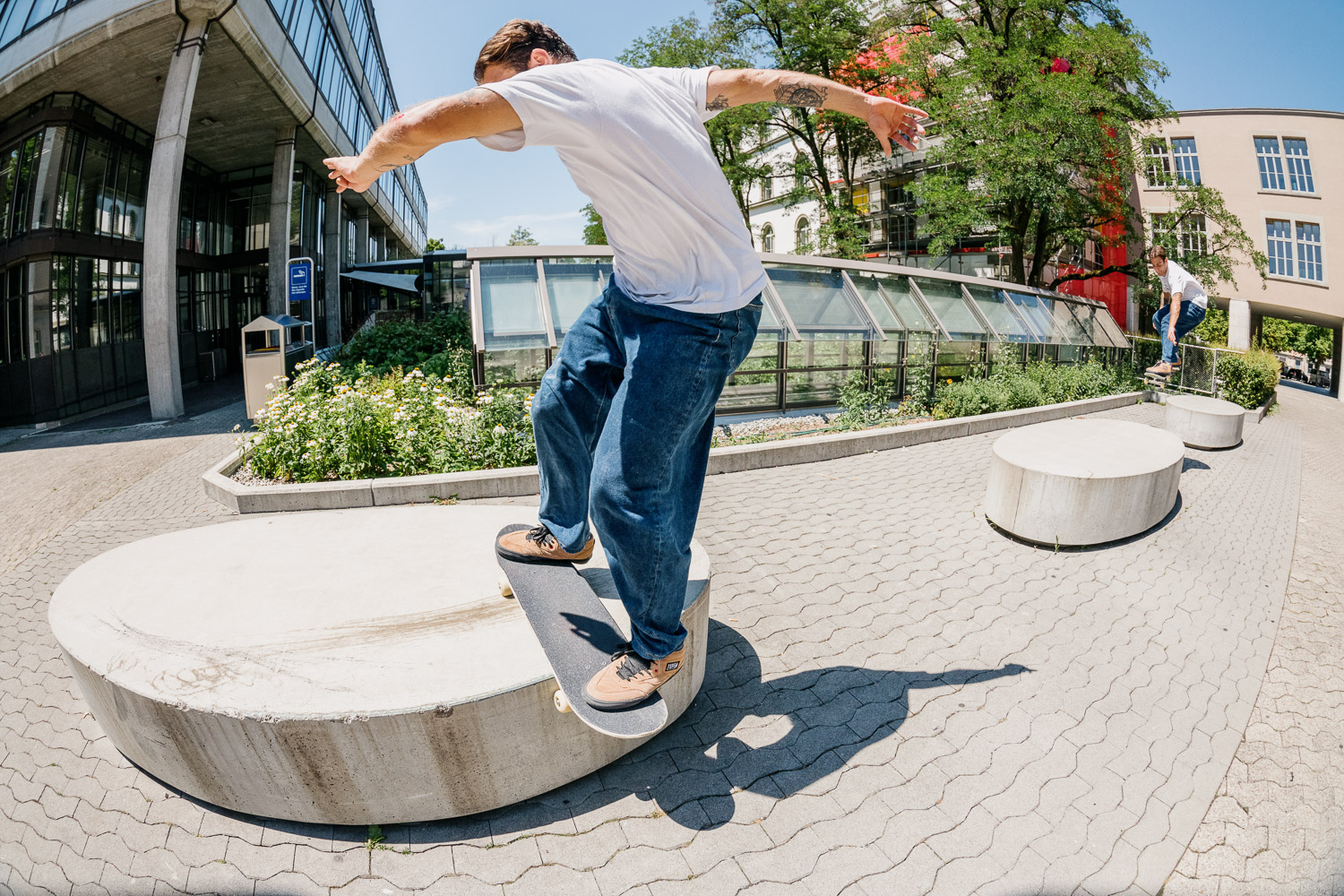 ‘POWER, RESPECT, UNITY, FRIENDSHIP, PROPERTY, INSANITY… NICO!’ It’s about 10am and we’re sat outside the hotel a couple of days after me
joining the trip, and Notis and Oscar, the original and only two members of the ‘Nico Team’ are looking deep into each other’s eyes, united by their love for cigarettes, palms cupped as they prepare for their hundredth slogan shouting embrace of the week. I give them a look of ‘please it’s way too early for this shit’, which is greeted by a stern reminder that ‘Nico is more than a brand, it’s a movement’, or something along those lines. I nod, smile and refrain from pointing out that it kinda sounds like some weird white supremacist rallying cry to not spoil their fun. They’ve been on the road for a bit longer than me so I just accept that they’re probably just at a slightly more advanced stage of their rapidly developing insanity. 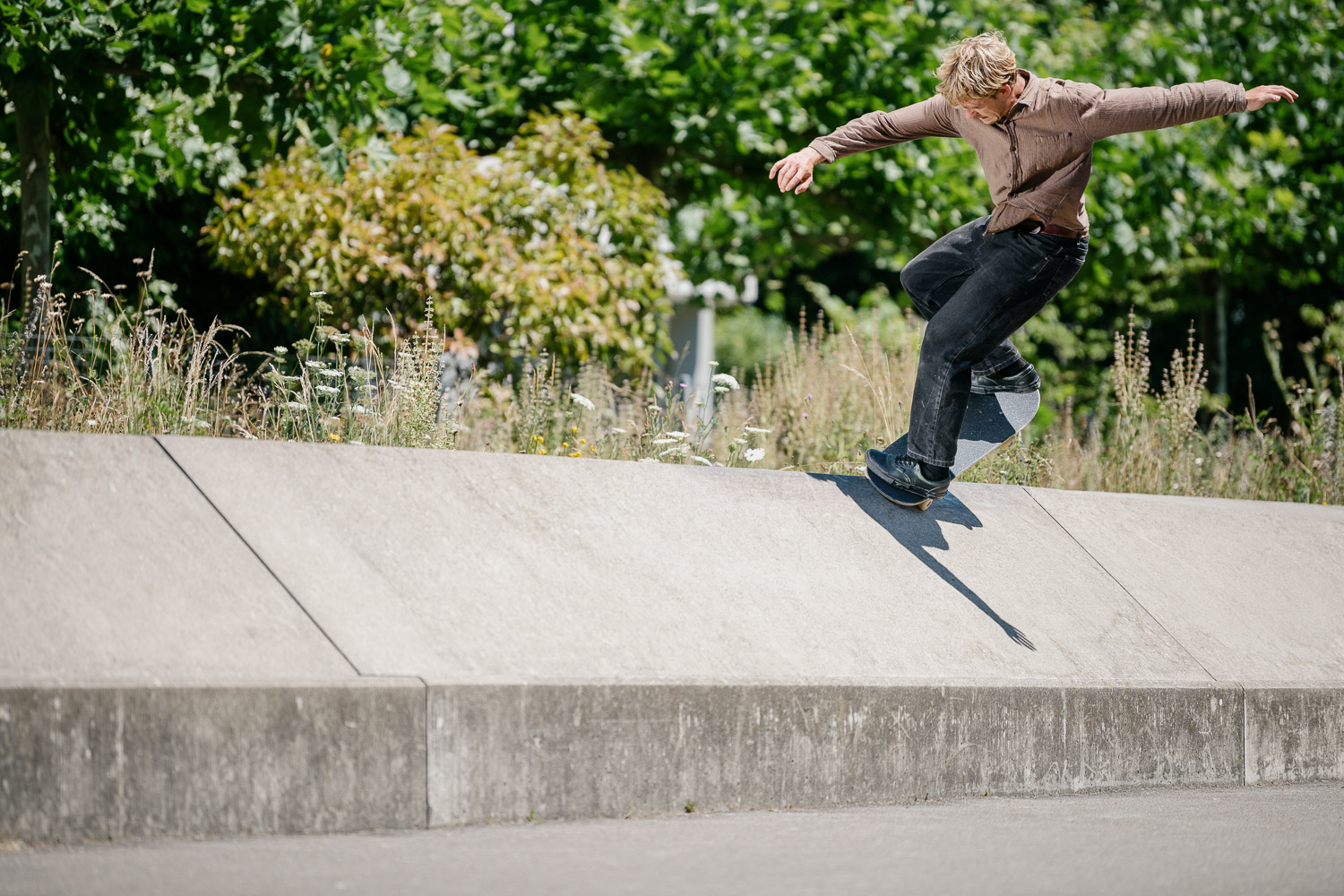 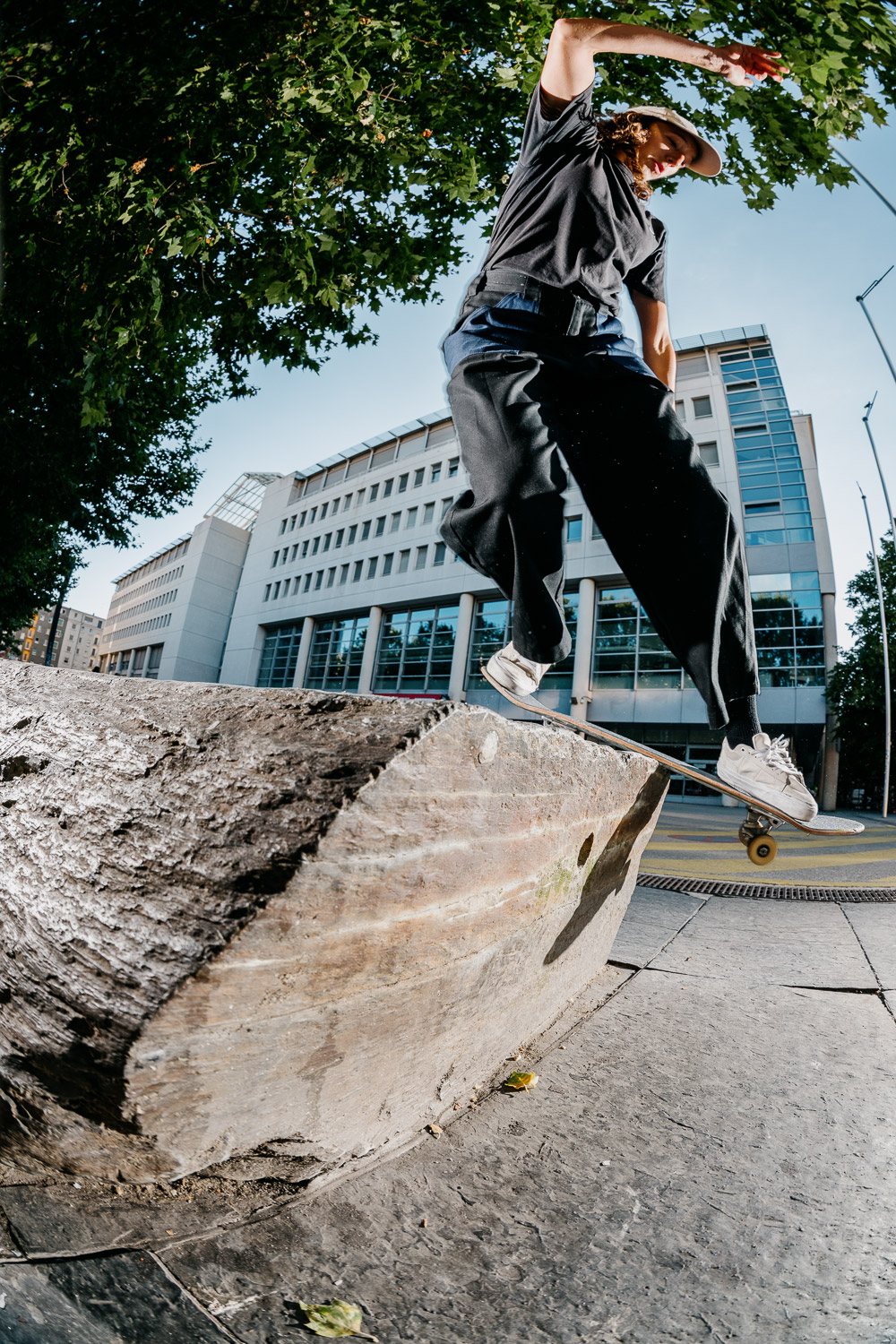 ‘Okay so what happened last night – that absolutely cannot happen again. You hear me? People on the second floor complained about you this morning and I watched the CCTV footage… This is your one and only warning. Pass it on.’
First breakfast of the trip; first conversation of the day with a human being. I bet deep down our gracious hotel manager also found it hilarious that Tania Cruz was waddling around the corridor at 2am covered in a white towel making ghost noises as Helena Long made the lights flicker… I really want to show him Tommi Björk’s angle of the shenanigans but resist the urge. ‘Sorry, we got a bit carried away’, I say instead. ‘I promise this won’t happen again.’ And it didn’t. Not our fault his hotel was haunted though.
As I nibble on the Emmental that poked out of my sweaty croissant I try to think back to the events of the previous day, piecing together what I remember in hope of making sense of why everyone was so hysterical by the time we rocked up at the hotel. Ah yes… That was the 15-clip day. The one where our TM could be spotted doing endless laps of the final spot on a child’s lost scooter, and Jon set up a midnight street office outside Domino’s to capture footage and recharge his batteries. The session that ended with us running up Tina Turner’s ‘Simply The Best’ and Eminem’s ‘Lose Yourself’ full blast on the boom about 70 times each in hope that Simon Zuzic would complete his Muska day as a drop kicked in. It’s also the point when I realised that there was no such thing as a Muska day on this trip, that it was actually completely normal for some of these guys to get several minutes of footage, at several spots, in less than 24 hours. 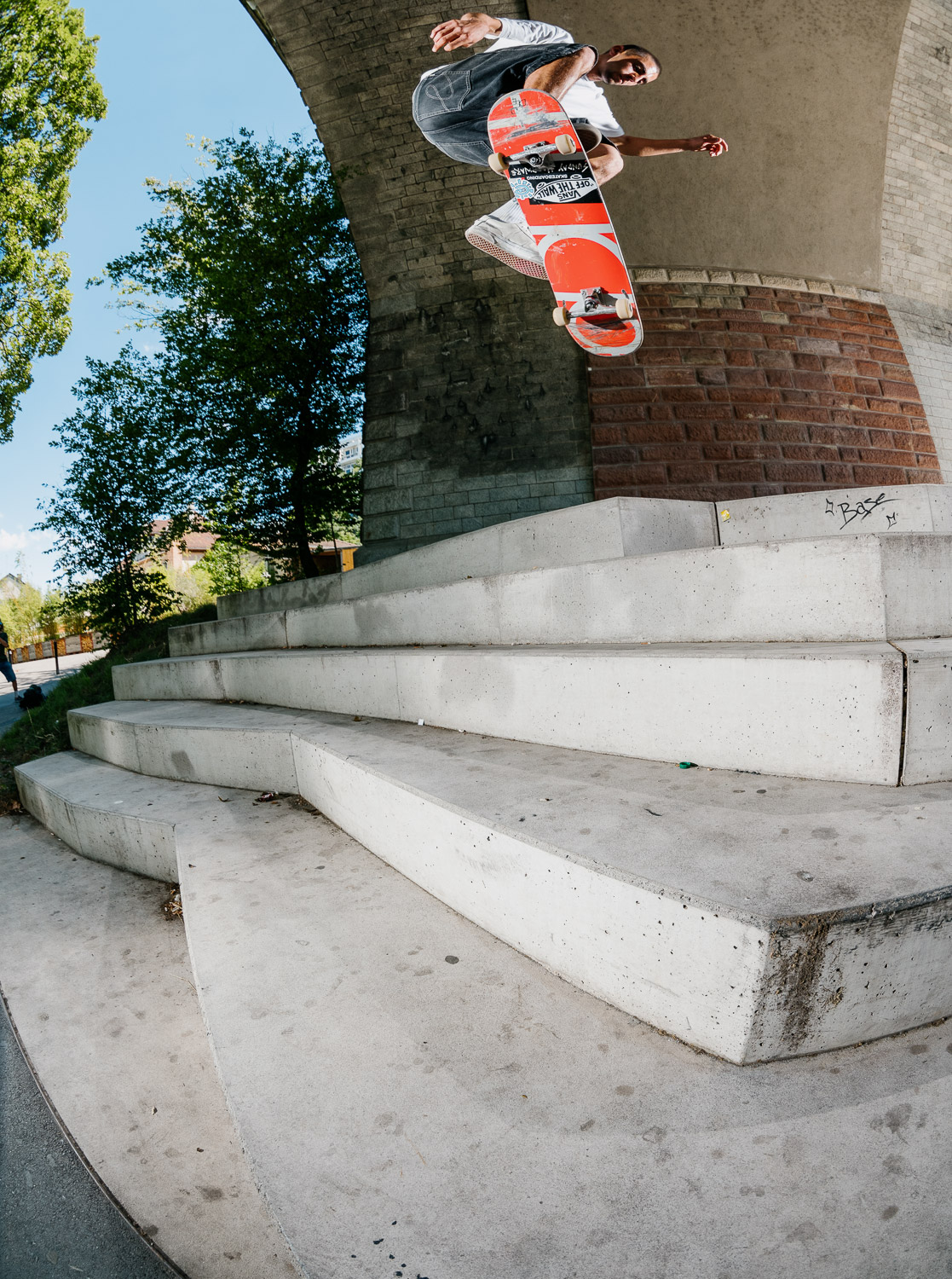 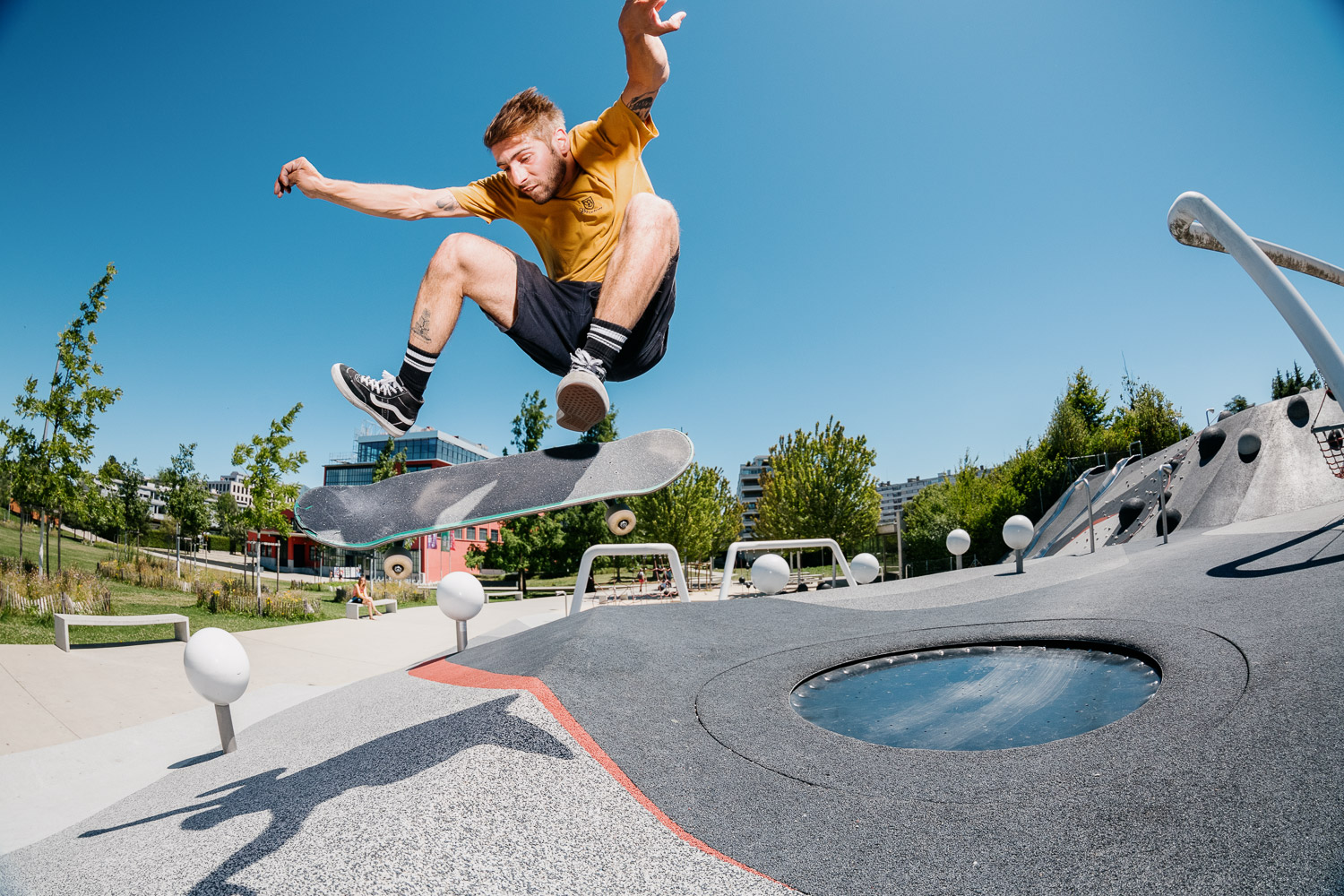 ‘All I want to do is go on trips with my friends. What am I even going to do when I can no longer film skating?’
This is Jon Wolf entering the final stage of tour dementia. The stage when you become the tour, and can’t imagine life outside of it. We’re driving back from Geneva to Zurich on the last day. Last night his roommate’s snoring led him to spend a few hours in his bathtub, and later on attempt to sleep in the very car we were sitting in. The stream of consciousness he’s subjecting me and Arno Wagner to is endless, unfiltered, and clearly a coping mechanism to somehow keep his eyes open and focussed on the road. He’s broken… A puddle. The one thing he desperately needs is to not be on tour yet the closer the prospect of that grows, the less he can picture life beyond the tour.
‘Now he’s fully lost it’ I think to myself as he utters ‘I guess I’ll just be dead’, as if it was a perfectly logical conclusion to the initial question he’d just asked himself. I start to wonder how deeply you’d have to immerse yourself into skateboarding neverland for there to actually be no coming back… I tell myself I must be the only remaining rational thinker in the car.
Fast forward eight hours and I’m on one knee signing Oscar and Notis’ imaginary contract to become the chairman of Nico. Never smoked a ciggy in my life, now officially part of the ‘Nico Team’. Last ounce of sanity just went straight out the window. 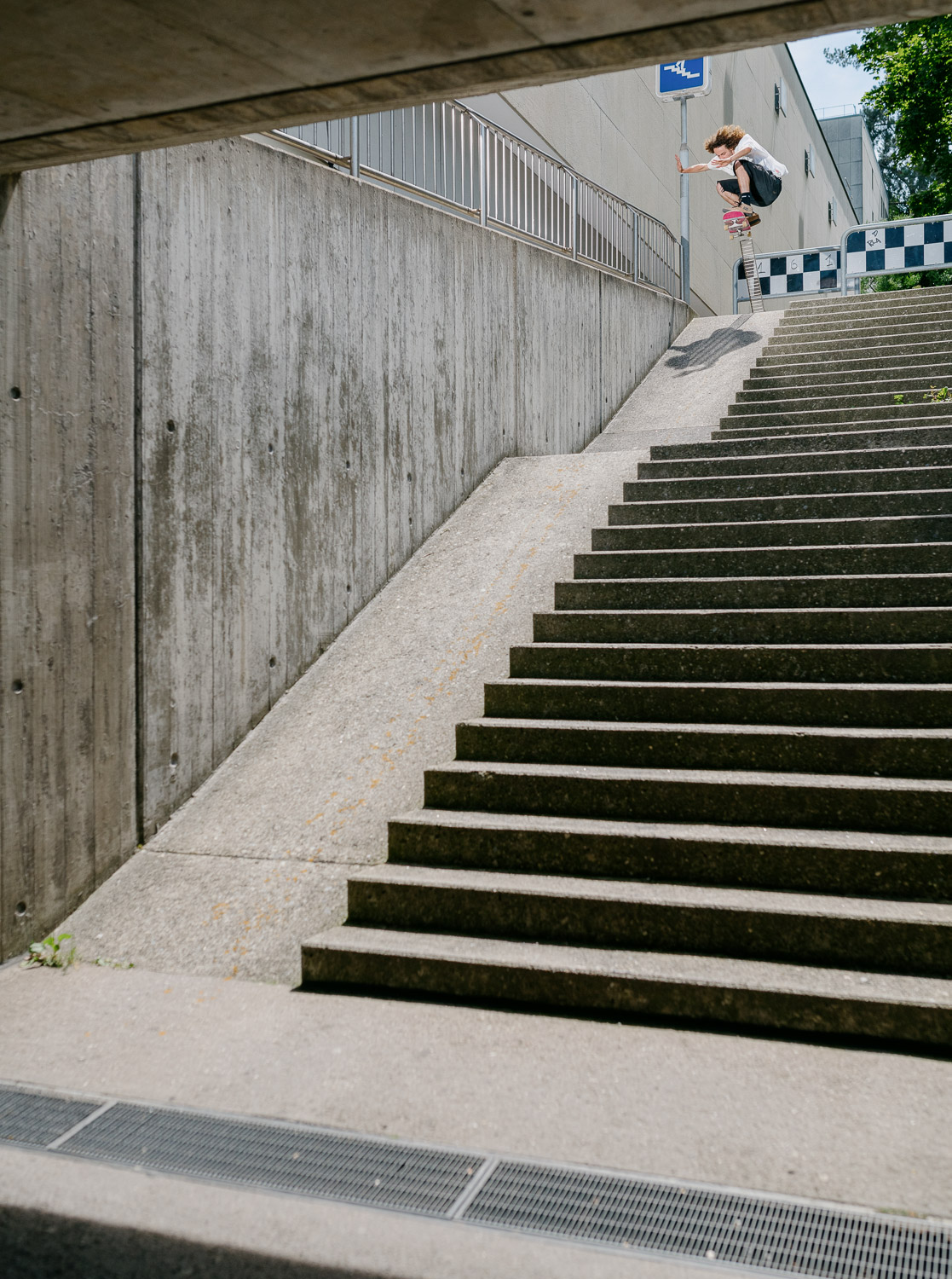 One of the things I failed to mention earlier when I brought up mine and Bobaj’s confused crawl out of that dingy Zurich club (thinking it was 2am and not 6am), is that this bizarre combination of confusion and serenity
that enveloped me, and helped me come to terms with the end of our Swiss pilgrimage, was that it was not exactly shared by my stumbling companion. As I pulled him out of our ride home and attempted to steer him towards the elevator, he spotted two members of our delegation sitting outside the hotel on the floor… Eye contact was made, could tell he was trying to tell something, but it’s not until we the ping of the elevator that he managed to free himself from my stabilising underarm grip and managed to spurt out the words: ‘Ciig… Cigarettes. One more cigarette.’ He just needed more. And I’m not just talking about him proving his legitimacy as a member of the ‘Nico Team’. For people like Bobaj the trip never really ends. He filmed 10 hours a day every day, had dozens of spots lined up for us in every city, kept the WhatsApp group alive even after we’d made it all home, etc. But most importantly, he will already be preparing for the next mission. Just like Jon who came straight from a TWO-WEEK Samurai Safari camping trip, and just like everyone else who took part in this excursion. This is their life. Going on a proper skate trip for the first time in years was ridiculously fun, but it also absolutely battered me. Seeing some of our favourite skaters in shoes with red dots still feels a bit surreal, but I definitely got a good reminder of who we really owe this shit to. If it wasn’t for this ever-growing army of ridiculously dedicated European skaters, filmers and photographers ‘planting seeds’ for the mag all year around there would be no Free, so this one goes out to all of you! Thank you. 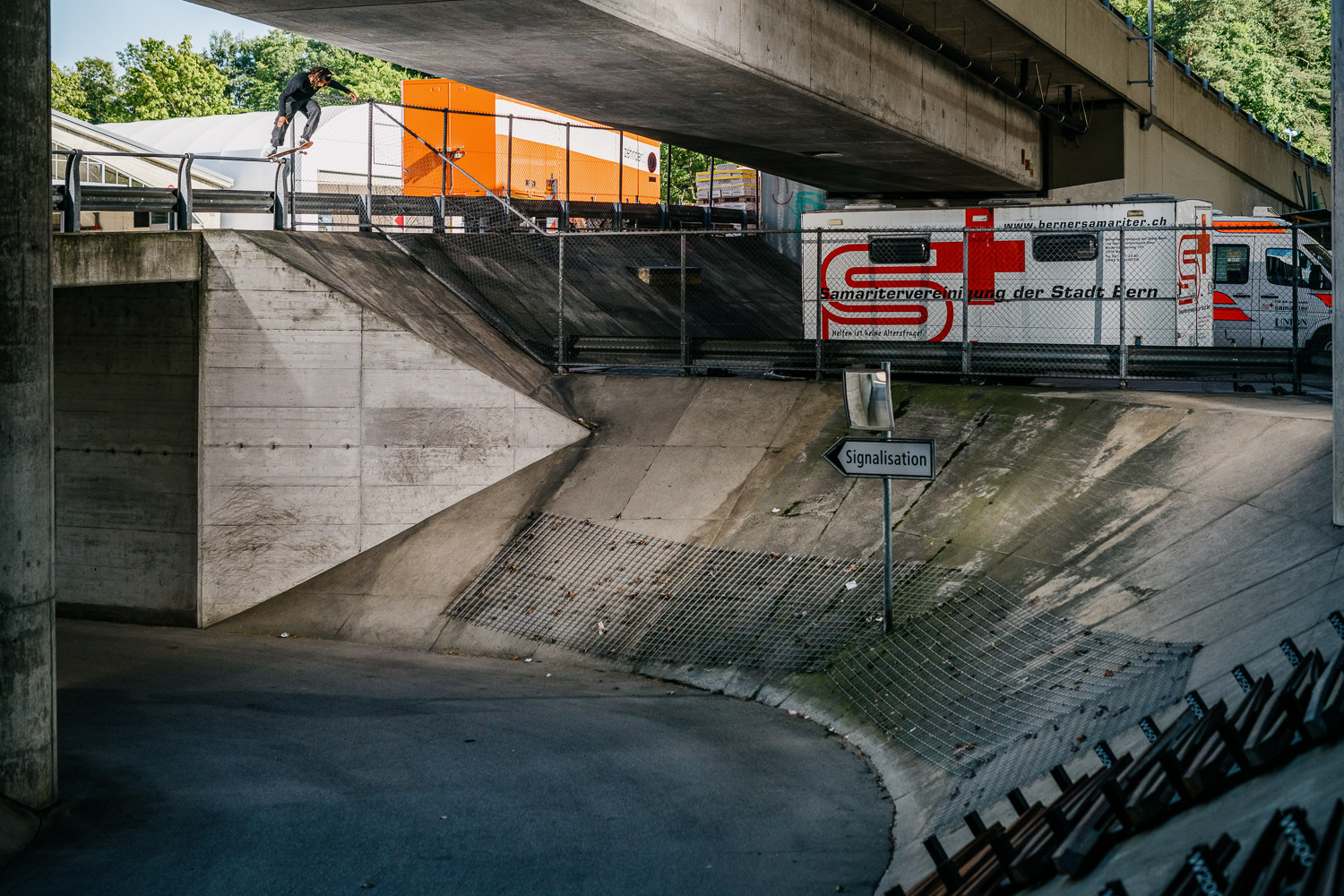 Click through the Gallery below for more of Sam Ashley’s shots from the trip: 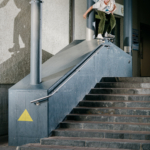 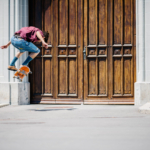 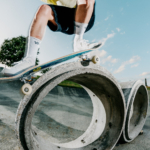 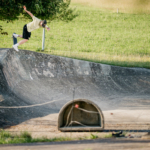