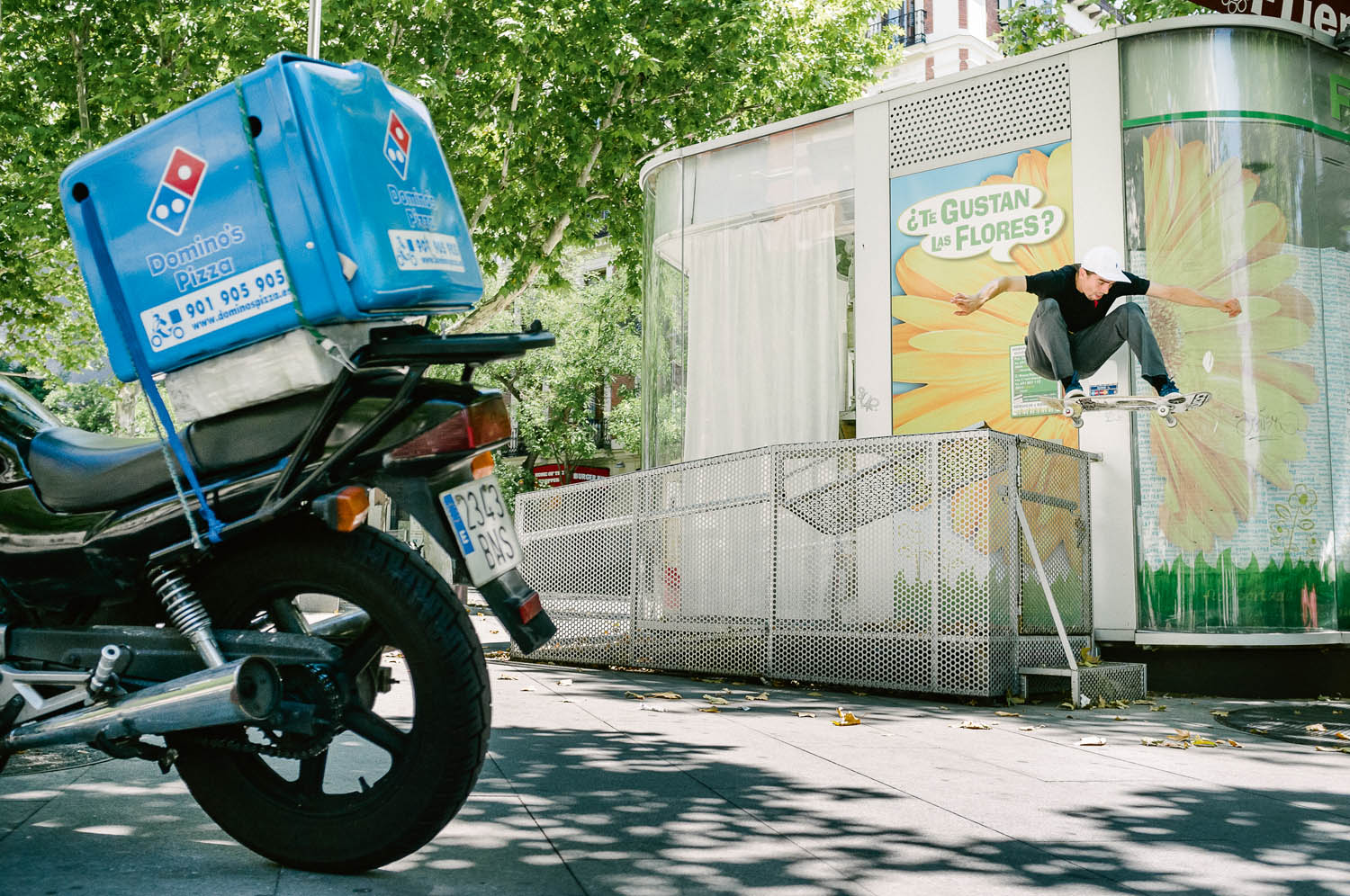 This past July the Converse team rolled through Europe on the Cons One Star World Tour. The team travelled through England, Spain, France, Holland, Belgium and Germany so we caught up with Aaron Herrington who was on the whole journey to fill us in on what went down.

All photos by Sam Ashley
Aaron Herrington interview by Will Harmon

So Aaron obviously you’ve been to Europe a bit with Polar and I know you were over here just recently with the Cons #Pleasecharge thing… How different was this tour to the #Pleasecharge trip?
Aaron: It was different but it was really similar… um… Different in the way that there was just more people, there was like twenty of us, like fifteen skaters. But I mean as far as like… (It being different) I would just say more skaters and more skating and at the same time more goodbyes and more fun, and I mean more memories.

Yeah…
I would say it was a little larger budget so we were all going out a little bit, eating a little nicer, and nicer hotels, but besides that… You know I kind of almost prefer the #Pleasecharge setting where it’s less people and it’s not as glamorous; it makes it a little more genuine sometimes. 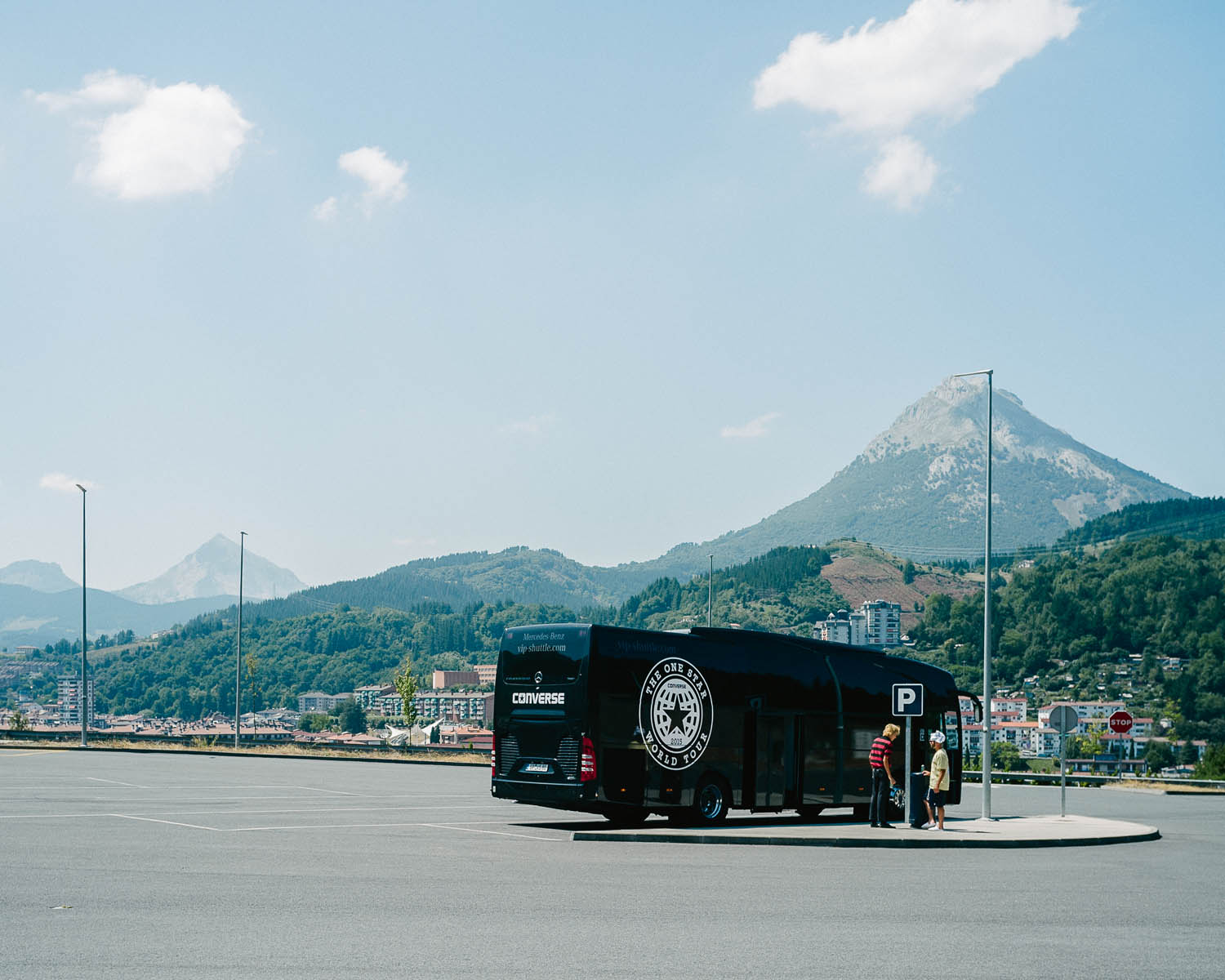 Yeah you feel like you get to know the cities a little more on the #Pleasecharge tour as you guys are going not just to skate a demo, but you are skating the cities and stuff…
Yeah completely, I mean when it’s a smaller crew and you have the ability to skate around, push around, then you get to be a skateboard tourist. But when there’s twenty of you and the focus is around demos, not street skating, then you know it kinda becomes a little annoying or stressful. When you know you’ll be in Berlin for two days, and then Antwerp for two days, Bordeaux for two days and Paris for two days then you don’t really get to fully enjoy or indulge in the city. But at the same time I guess that’s not really the point of us being there… But I guess it’s nicer when it’s small; you definitely get into more things when there are less people.

So you were on the US part of the One Star tour right?
Yep. 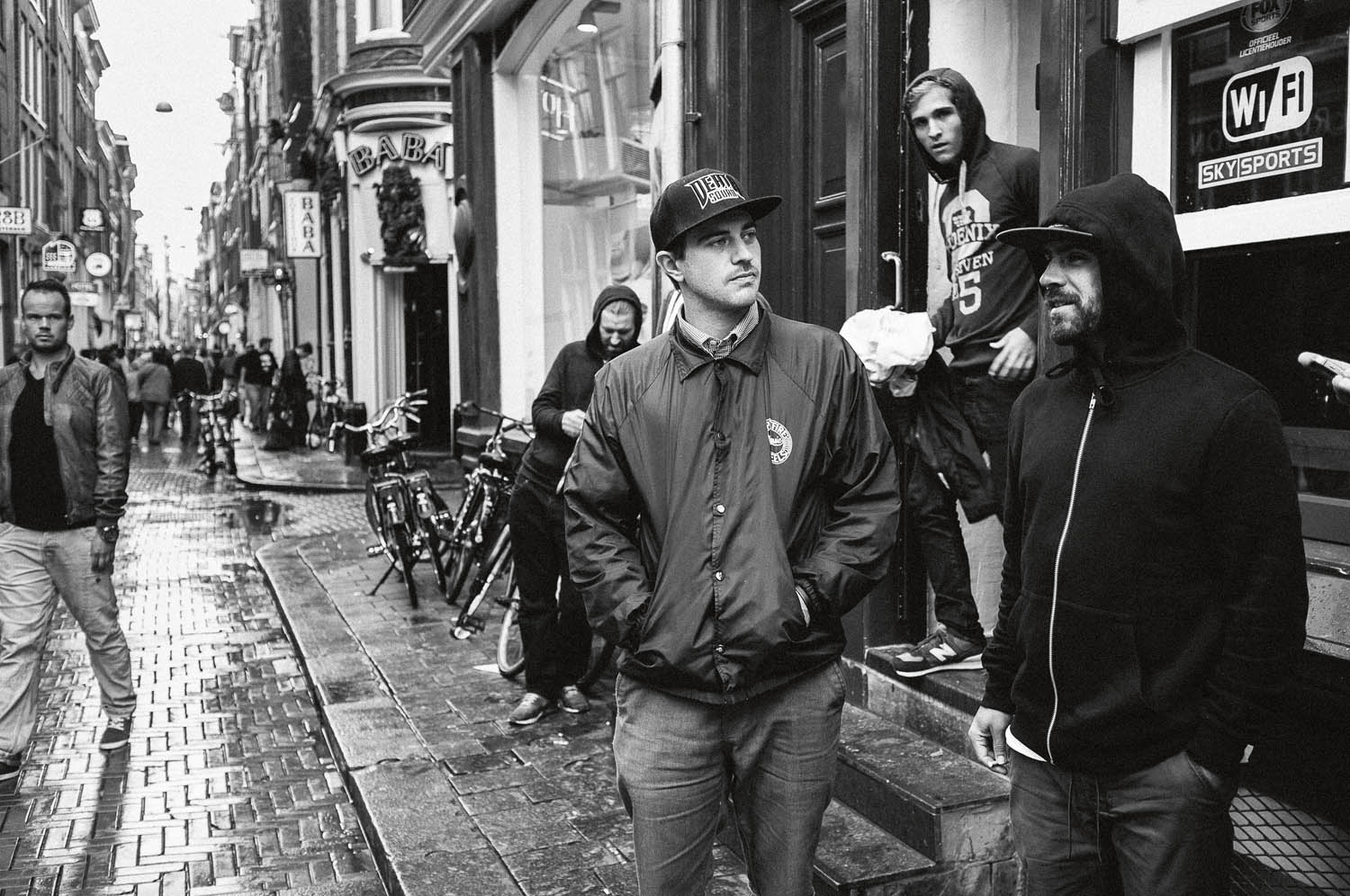 And how was this tour different to the American one?
The American tour was different because we were in passenger vans, versus this massive tour bus and jokingly there was like some van rivalry, you know what I mean like, after a weekend you know one van was against the other van and we were shooting fireworks at each other. I would just say that the US tour was, it’s hard to explain; the Europe tour was amazing because we were in Europe, and regardless of where we were like ‘oh we’re in Europe, we’re not in America’ you know even if it’s a small city in the UK, you know it’s awesome. In America, when you’re in the middle of America, like Little Rock, Arkansas or Oklahoma City, there’s not a whole lot to really indulge in you know – there’s not much history and if there is it’s American history, and there’s not much to do. I mean the cities don’t even have a million people in them any more so they’re not really like a metropolis, like the city its just a big mess of concrete that’s just been left there for 40 years. 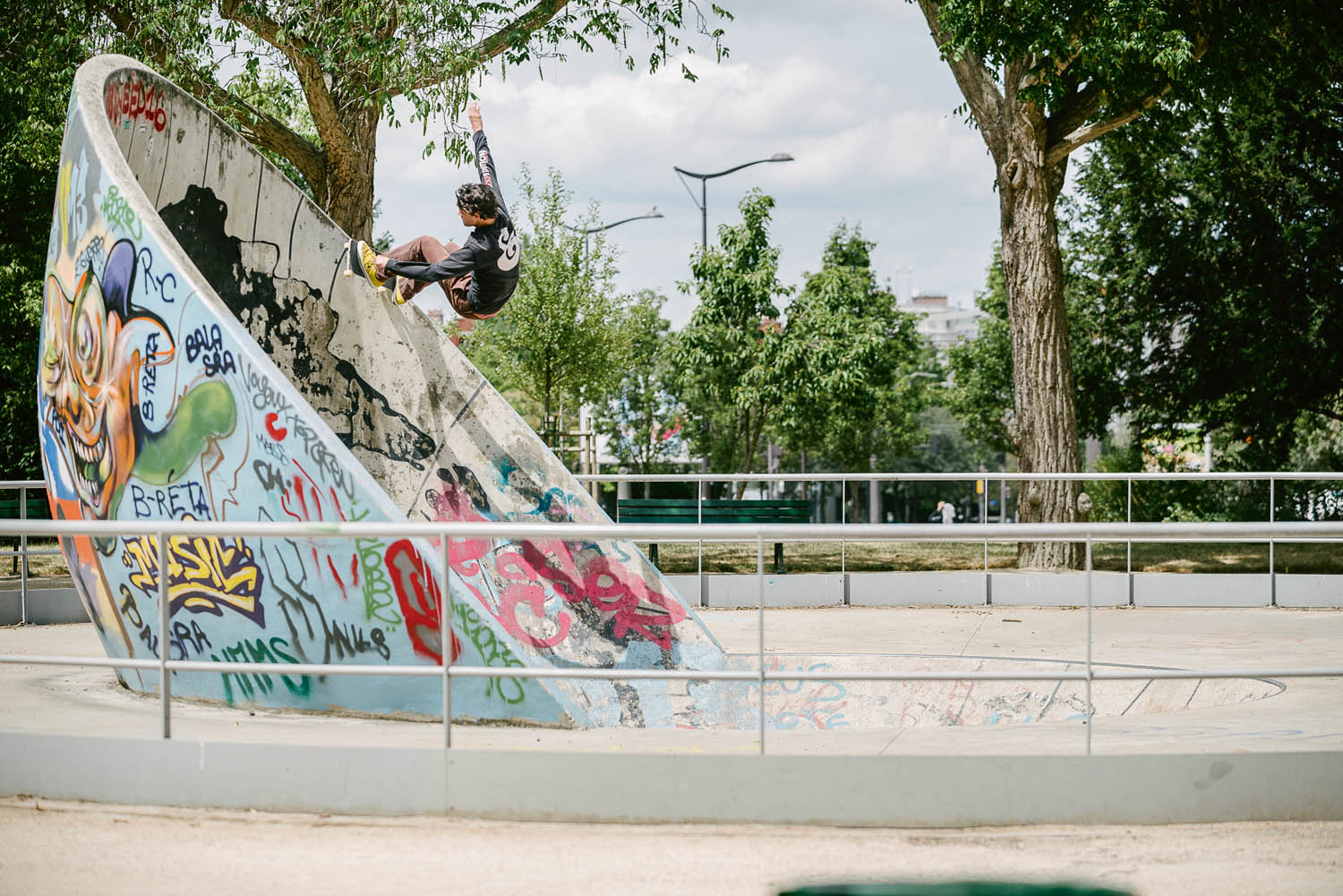 Yeah…
I’ll just say there’s not as much to do in the States. It’s not as pretty, doesn’t look as nice…

And was there like a favourite stop on the Europe one, like a favourite country for you or what not?
When we drove to Amsterdam from Antwerp it was a quick three-hour drive and it rained both the days we were in Amsterdam. So that finally gave us a chance to be tourists ourselves and not really have to focus on skating for a day or two. We got to party and go a little wild and have fun. So I would say Amsterdam was probably like the most fun place because there wasn’t really the stress of having to do a demo.

So Amsterdam was fun, that’s no surprise!
Yeah I mean we did do a demo but it was super low key, it was more like a ‘meet and greet’ and it was raining so you know we just had to really indulge in being tourists. 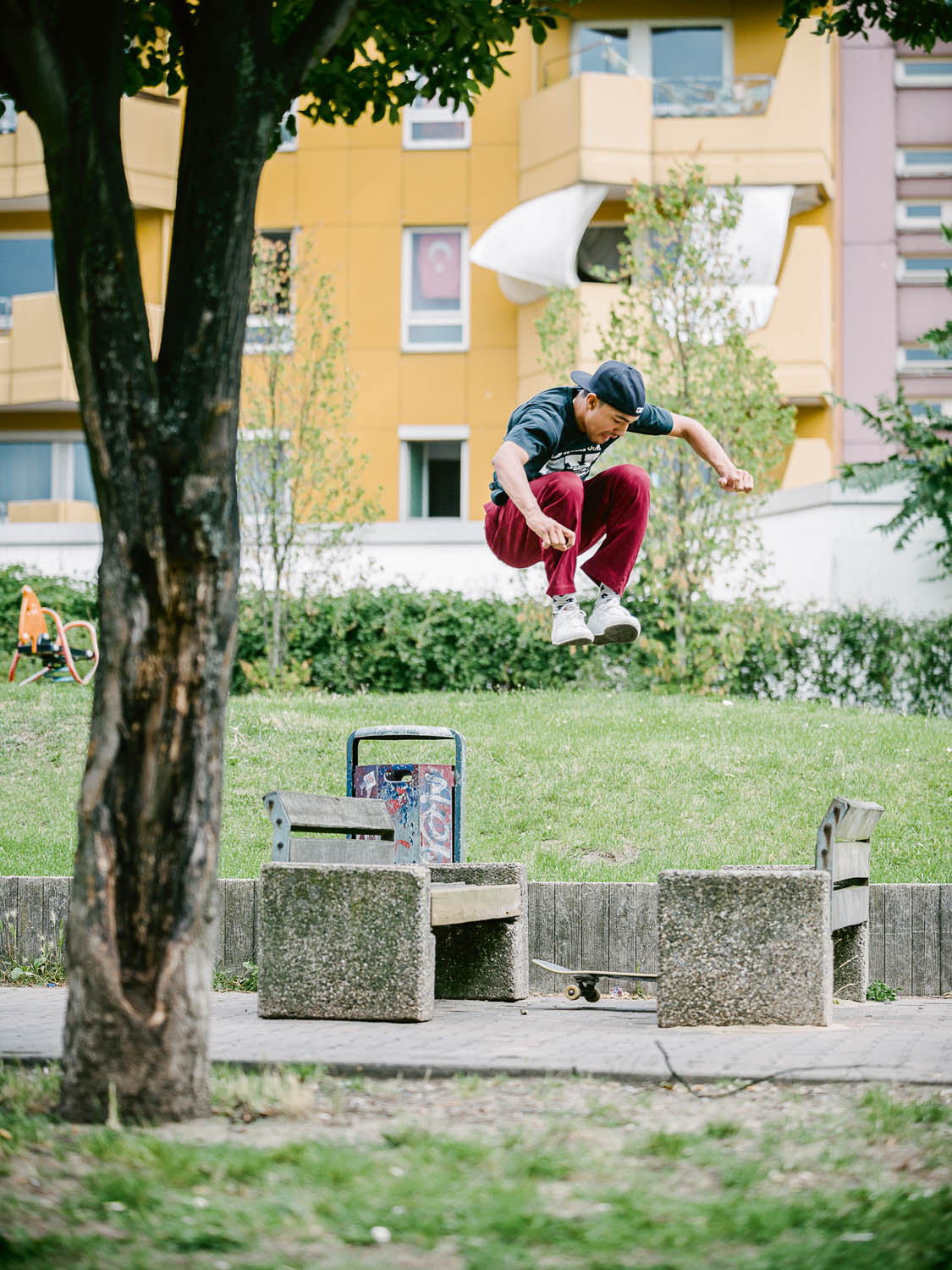 Cool. So do you feel there’s a big difference to European skateboarding compared to skating in the States?
Yeah, I mean as far as the outlook of skating it’s still the same, but I mean just like the skate spots… There are amazing skate spots in Europe where there’ll be like plazas and crusty urban skate spots. I would say the biggest difference would be that you don’t really have to worry about the cops. You don’t really worry about police too much you don’t get kicked out as much I feel like.

Yeah I agree. It’s mainly security guards you deal with, not actual police.
I think in the States you just get hassled by the cops a lot just for being there but it seems like in Europe a lot of people actually understand skateboarding and kinda like it and get it. 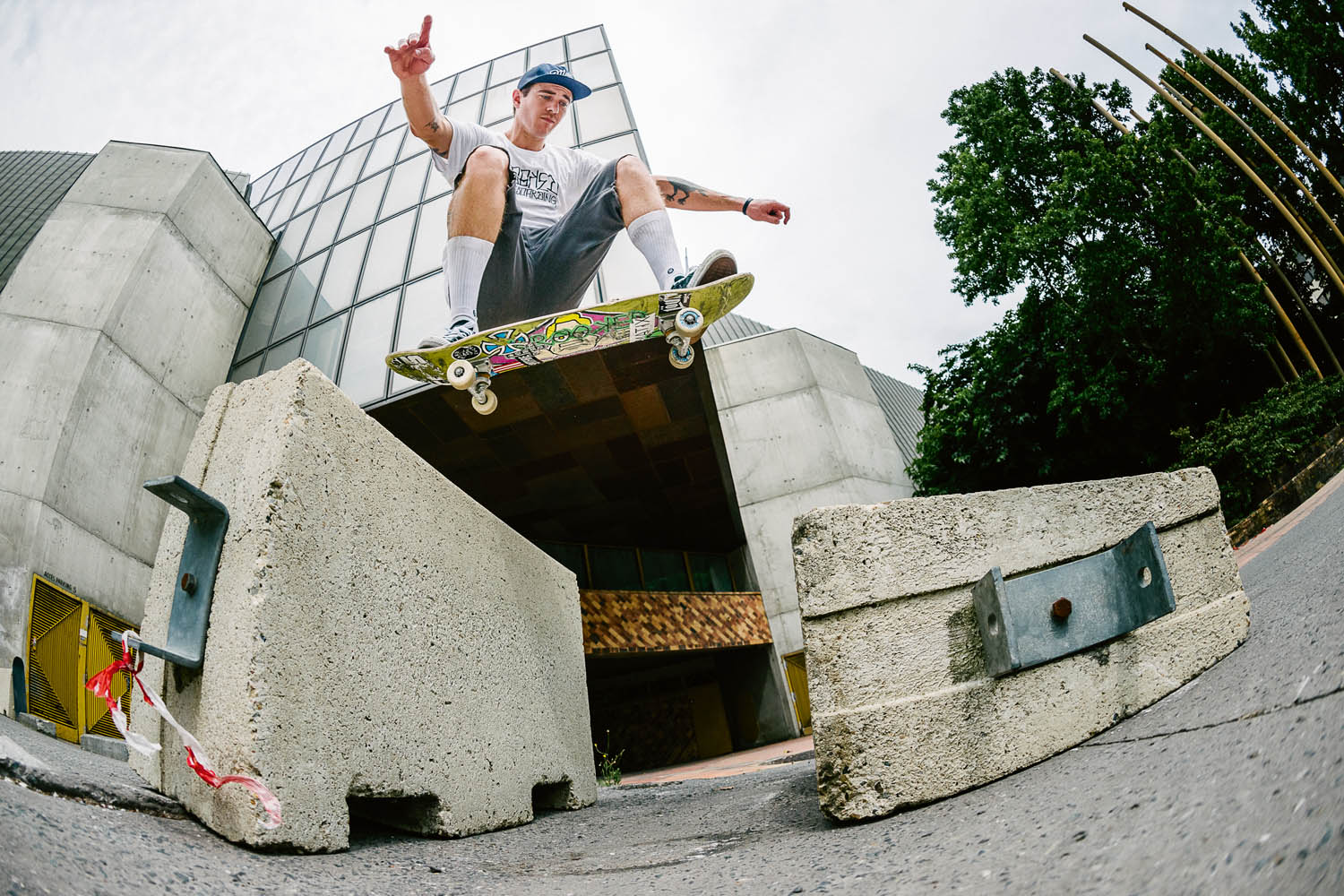 I feel like you rarely ever deal with the police over here. Whereas in the States it happens like every week or something…
Yeah and I mean it even goes further than just talking to the police, you always have to give them your ID and they make sure you’re not a criminal. In New York the amount of times I’ve known of people who ended up getting arrested just for skateboarding because they were in a playground without a child… Just certain things like that… It’s so absurd. 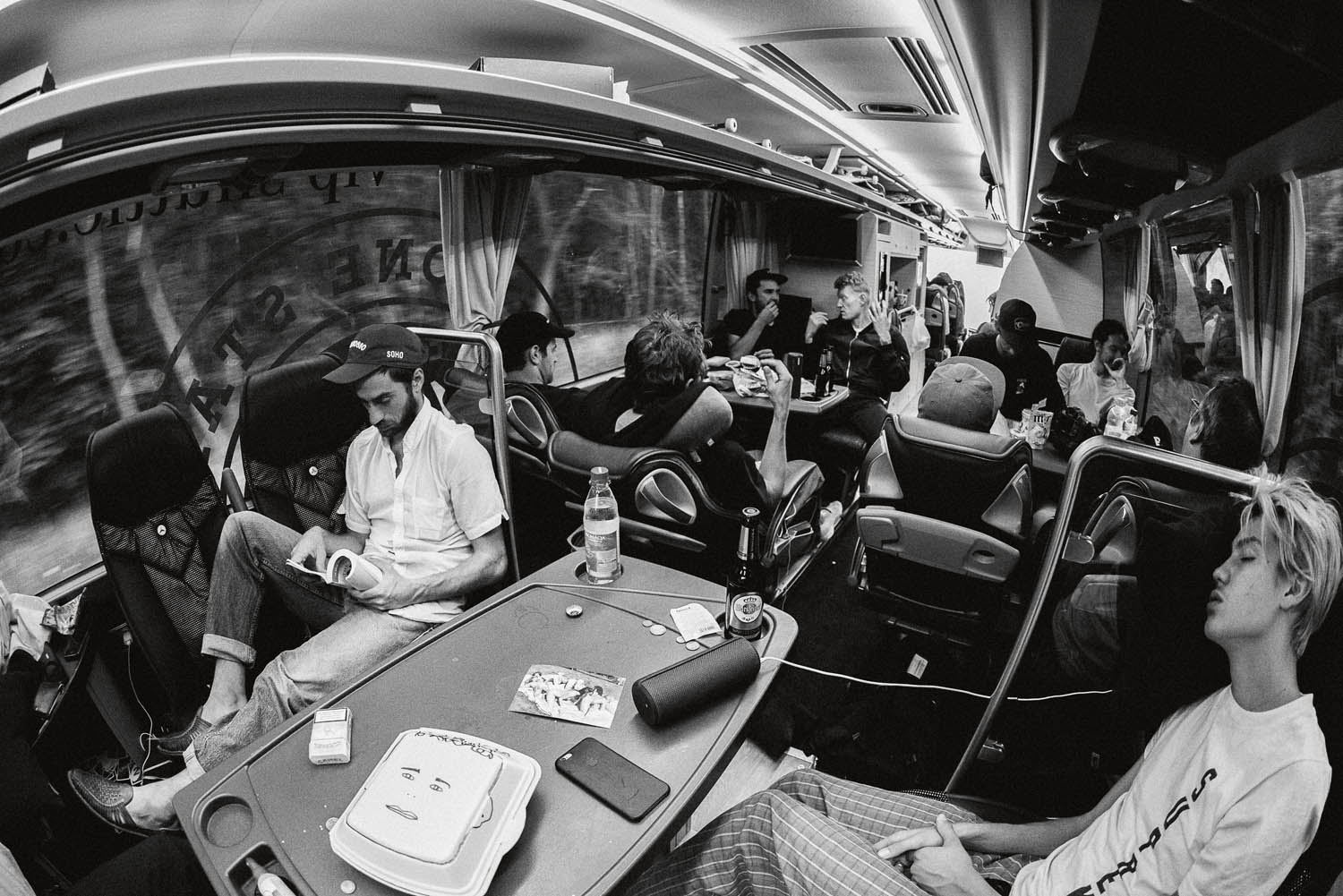 All right so this tour did have a lot of demos. How did you feel skating them and how do you feel about demos in general?
To be honest I really like demos. I think if it’s a good skatepark and a good turn out I think that kind of determines the vibe of the demo. I really liked the vibe of all the European demos. On the US tour we were staying in some of the smaller cities that don’t necessarily have this big skate scene so you go to these demos and these kids 1) don’t really give a shit and 2) not that they have to, but they have no idea who any of us are. So it’s just a normal day at the skatepark for them… I mean so we go to these demos in the States and we’re skating around with all these locals and it’s kinda hectic but then when we went to Europe it seemed as if the kids had a clue and were super interested and were super psyched to see Louie (Lopez) and Sage (Elsesser) and whoever. I mean at that point people actually came and sat down and let us skate and let us do an actual demonstration. 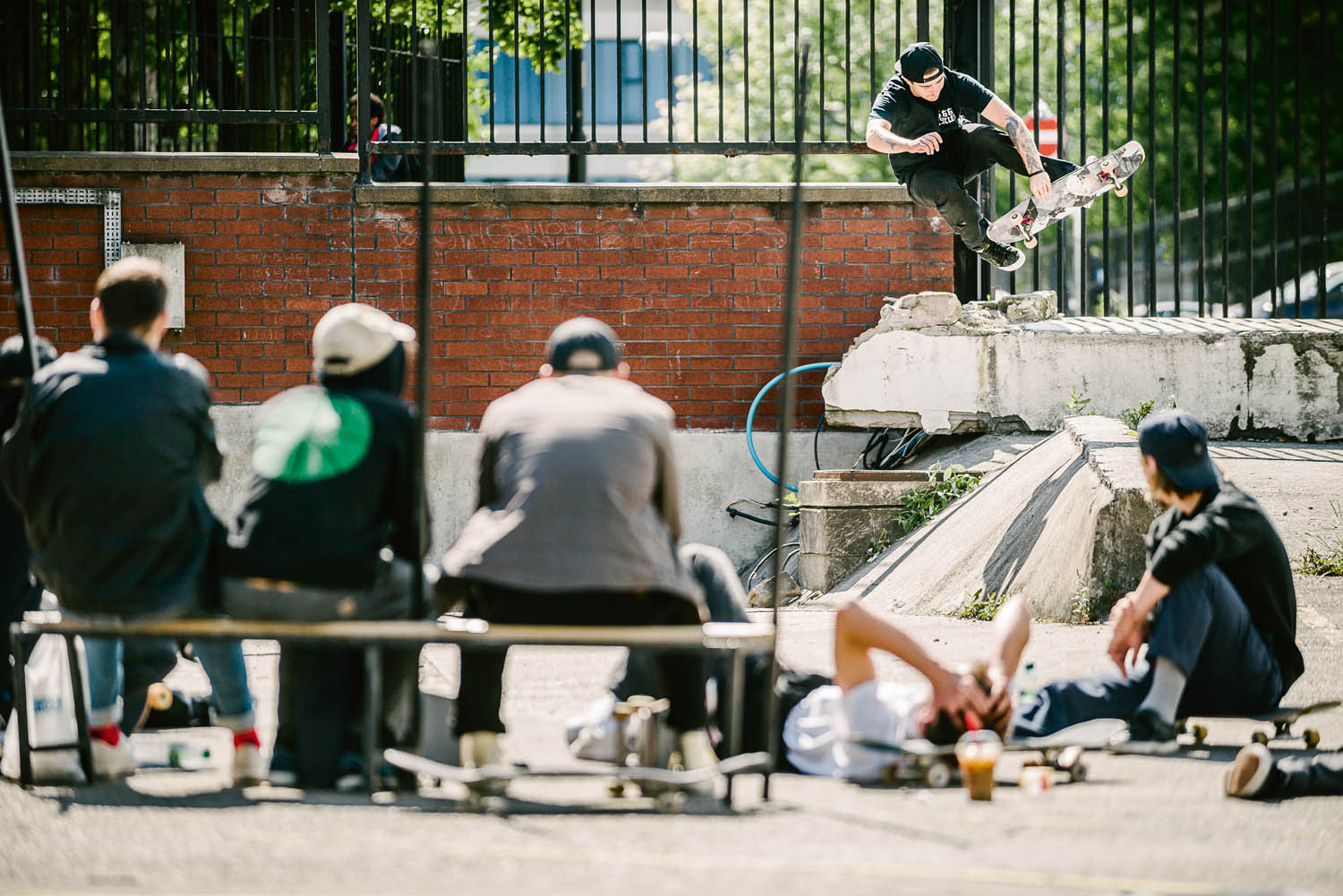 That’s cool. So what do you think about the hometown heroes and stuff that won’t stop skating do you think that’s a bad thing or do you think it’s all right?
I actually think it’s really good because sometimes those dudes really rip, like when we were in Manchester for example there was this dude that was just ripping and doing the craziest manual tricks. He was covering his eyes and doing all this weird stuff like a manual trick into primo stall, and you know flipping his board around in his hand, then back to primo stall, and then flip it to manual then nollie flip out and churning out all these crazy tricks. It’s nice having those dudes take the pressure off us a little bit. 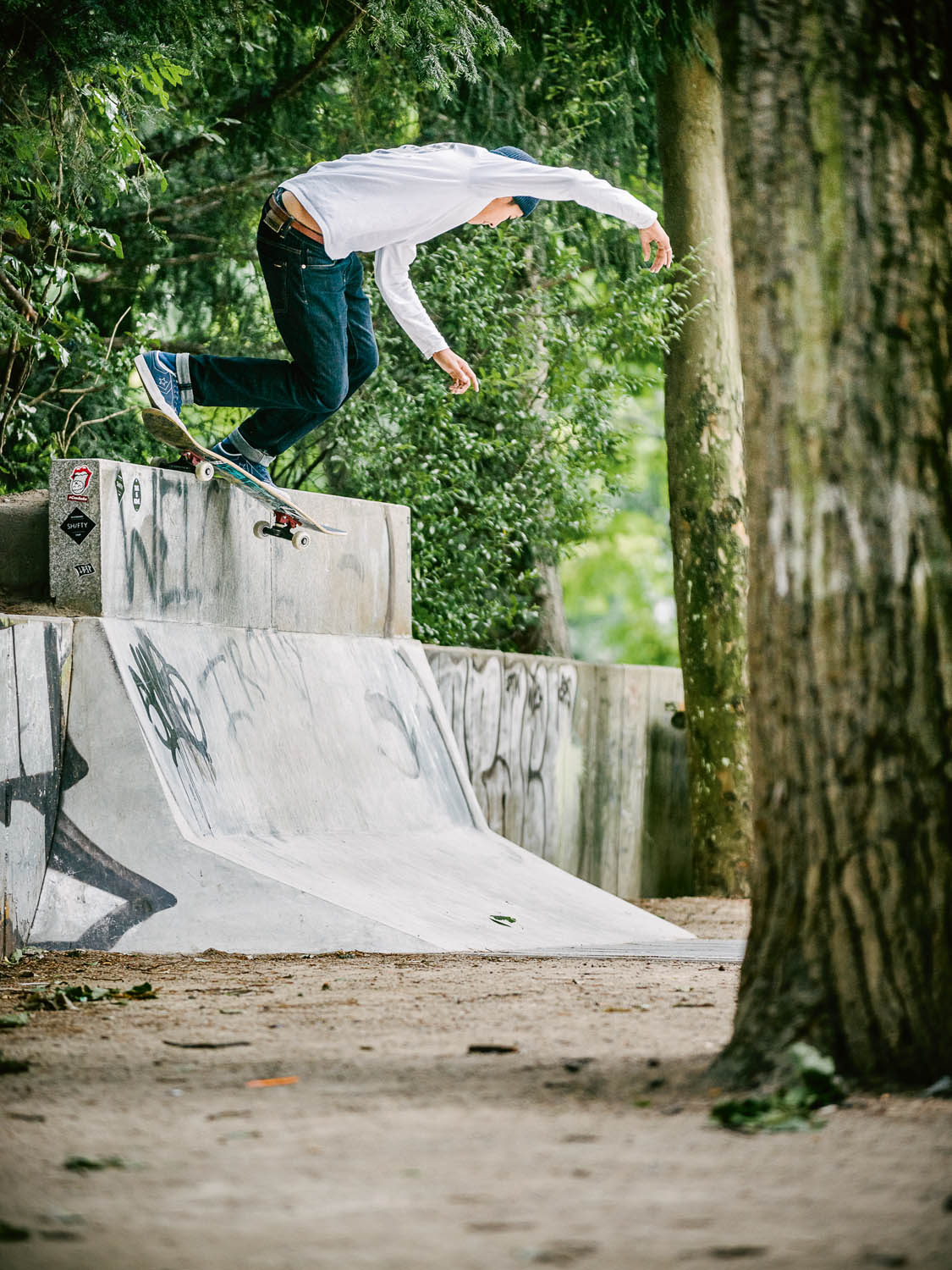 Oh yeah that’s great… I never thought of it like that…
Yeah I mean when there’s other people skating then that’s a good thing because it kinda takes the attention off us a little bit and puts it into the locals. It makes it not so stressful for us and we can relax and skate a little easier… (Laughs)

Ok, so here’s a funny question: How were the donuts in Europe? Sam (Ashley) was saying people were bringing you donuts to the demos…
Yeah they’re good! When we were at the Riot Distribution shop (In Bordeaux) they had like two-dozen donuts there and I was like: ‘ah man I just ate food! I can’t even fully indulge in this!’ But I would say the best donuts are… They’re almost like beignets but they’re like a jelly filled donut and they have them in Bordeaux, but they’re like Nutella filled donuts.

Sick…
And ah… I mean pretty much any pastry in Europe is always on point. It’s always good. We seem to ruin croissants in America… 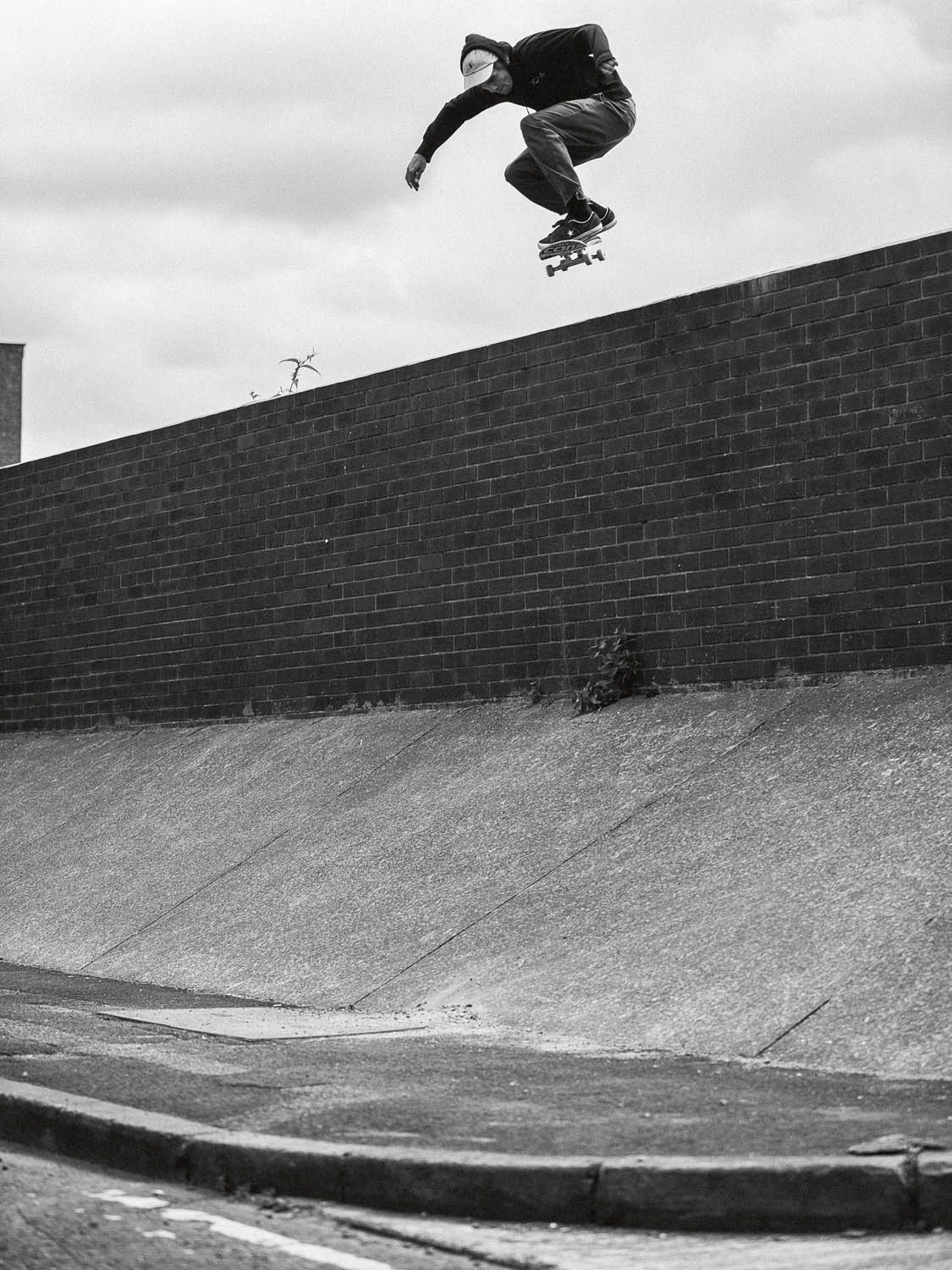 Yeah they’re much better over here, especially in France.
Yeah especially France, and just anything that’s like a breaded, pastry product in Europe is always amazing. And then there’s always Krispy Kreme everywhere too. Krispy Kreme’s amazing.

Indeed it is! Ok thanks Aaron. That about wraps it up. See you over here again for the Polar video premiere! 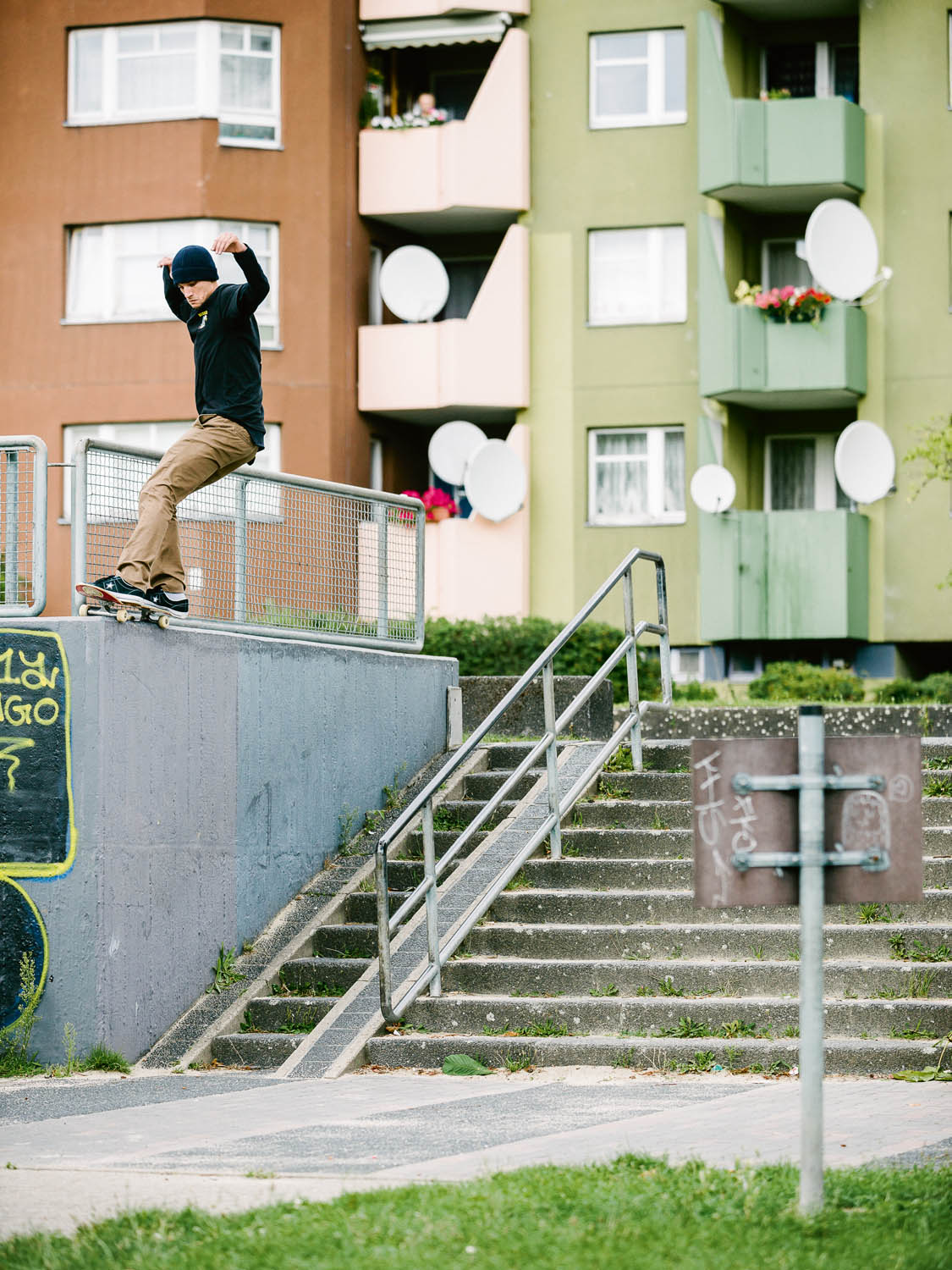