After receiving the photo of Yann Horowitz’s amazing 50 stall pull-in from Sam Clark (which became our issue 15 cover) we knew things were a-brewin’ in South Africa. Through speaking with Sam, Yann and all the South Africans based here in London we found out that Cape Town-based filmer Ryder Django Nel was working on a full-length video. So we hit up Ryder way back in 2017… After seeing the Chakalakka trailer we were instantly interested.
So almost two years later, after dozens and dozens of emails, three premieres and a lot of back and forth we’re proud to present the full Chakalakka video. Have a watch of the vid and read our interview below with Ryder, the guy who put it all together.

First off congrats on Chakalakka! For those not already in the know, can you explain the name?
Ryder Django Nel: Chakalaka is a traditional spicy relish that they say originated in the townships of Johannesburg or on the goldmines surrounding Joburg. Just about all the Chaka Boys are chilli fiends. When we go to a braai (which you guys call a Barbecue) it’s almost a given you need to bring a can of extra hot chakalaka. Lakka is slang for lekker, which is Afrikaans and a word we use frequently. Lakka is used for just about anything you find banging. Example: ‘Ey the jols (party) was too lakkaz last night!’ That’s why I added the double K to make it Chakalakka. I find it a funny word that you can play around with. 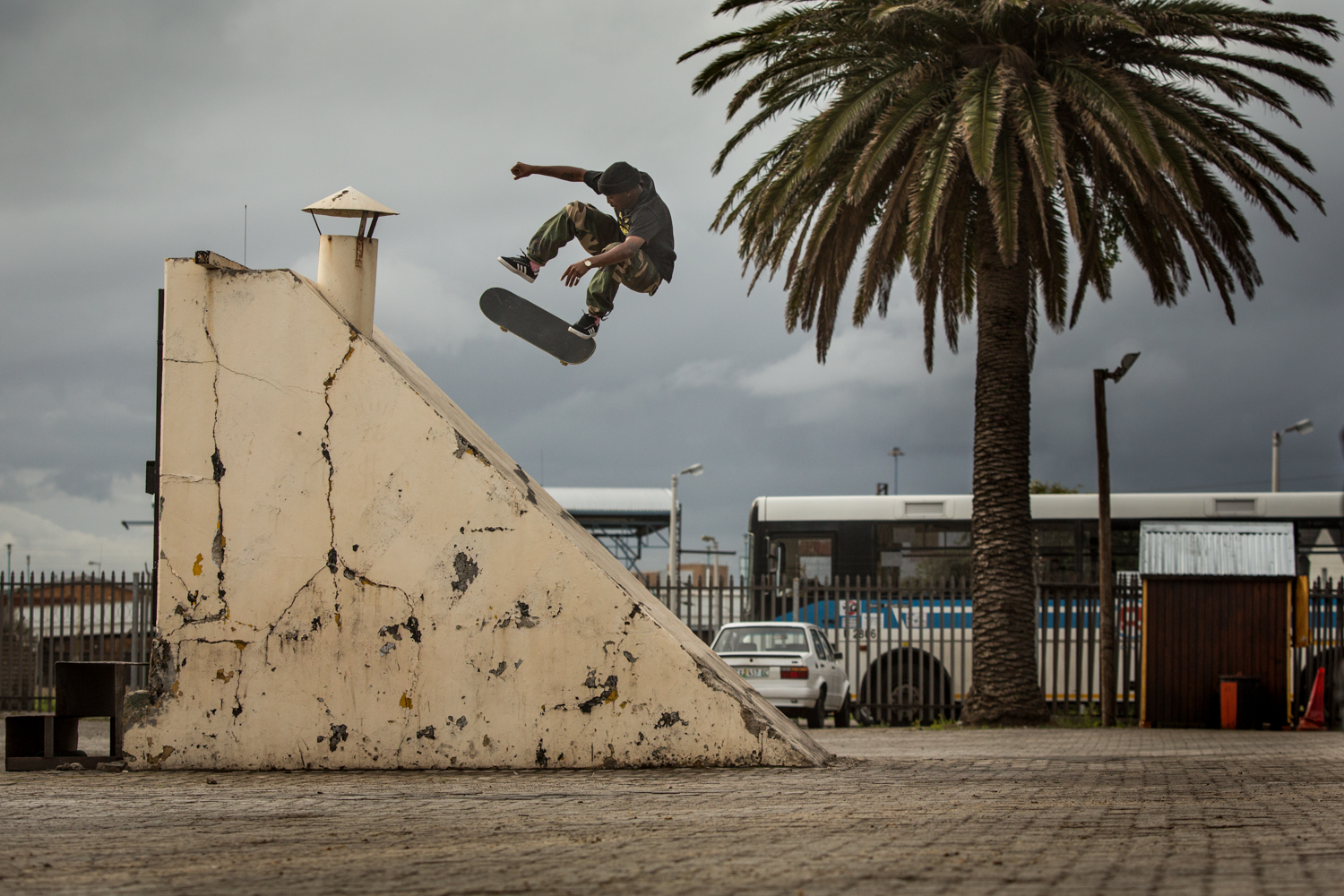 Is it true this is the first full-length video from South Africa in over 10 years? Why is that?
No it’s not true. My homie Joubert Van Staden has made a bunch of full-lengths for his company Plankie Skateboards. That chom is forever filming.
There is also a crew called Veg, which made a video from Joburg called Bitches Luh Dis Shit.
I think the reason people been saying that is because the last video that made waves overseas was Familia’s Bang Chong. That was about 10 years ago and is still the best video to come out of this country.

What is the skate scene like there in Cape Town? I hear every skater in SA is moving there.
The scene in Cape Town is by far the biggest in the country. It never used to be though. It’s the lifestyle here that brings all the dudes to Cape Town. The beaches are banging and the girl to guy ratio is 3 to 1. It’s also the gay capital, which gives even more chances for the choms. But the spots here in Cape Town are not the best by a mile. I guess homies will sacrifice spots for living conditions. Makes sense. 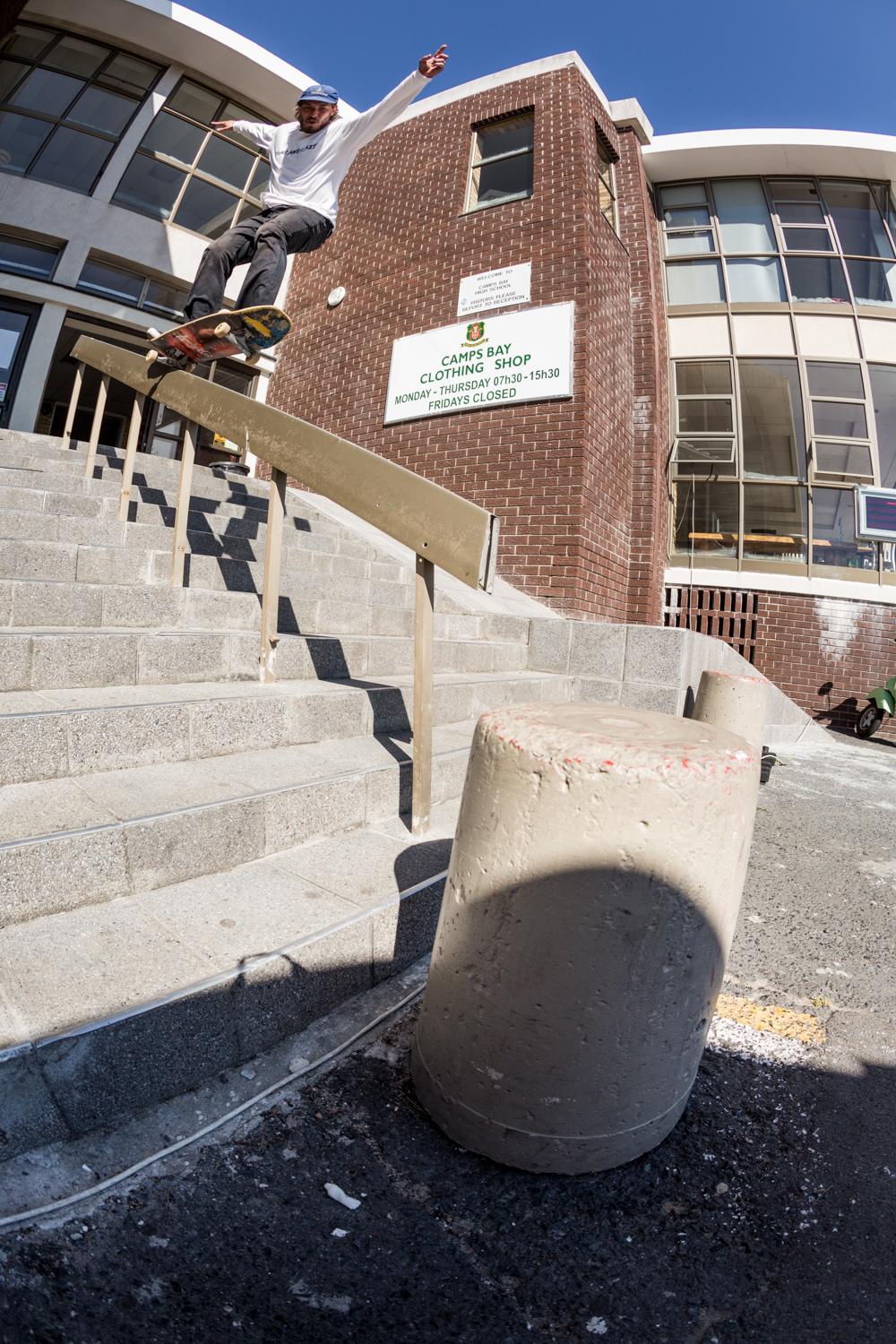 What’s skate scene like in the rest of the country?
Durban where Dlamini, Yann and I are from in my opinion has the best spots. There have been so many good skateboarders that have come out of Durban but everyone moves out because life is so slow out there. Hit a bong and go skate the park by the beach. Durban locals need to get out the park and skate the streets out there. Joburg and Pretoria also have banging spots. The Veg squad is holding it down out there. A lot of the Jozi homies have also made the move to Cape Town. Cape Town has kinda fucked the scene here in South Africa. A lot of shops and parks have closed because of it. Port Elizabeth also has amazing spots!

So how long did it take you to make this video?
I think a good 2.5 years. Not easy when you got a full time job. 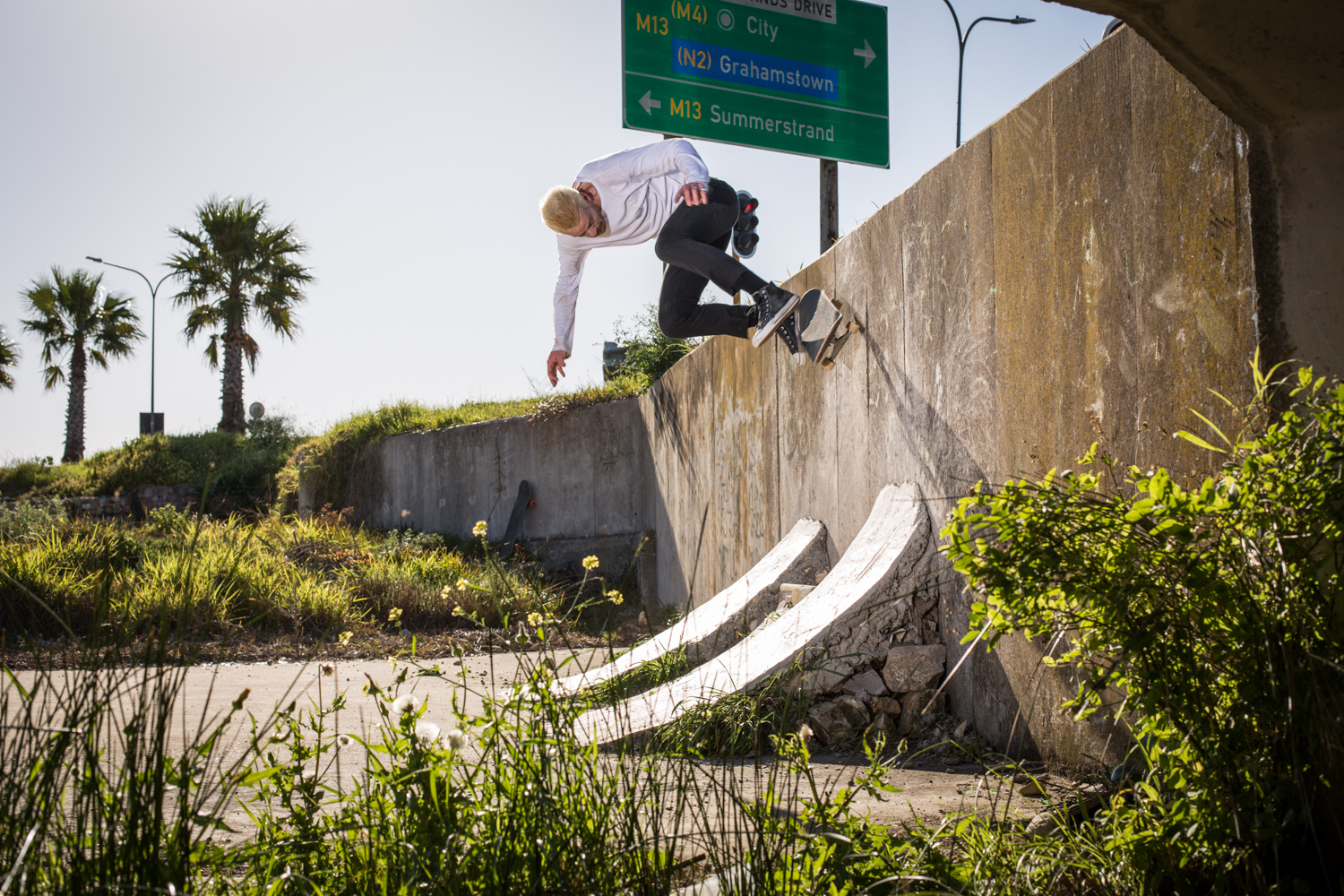 Are the spots in Chakalakka primarily in Cape Town or is it filmed all over the country?
I would say Chakalakka is 75% filmed in Cape Town. Which is a good thing and bad. You could say it’s a scene video. Baseline, the skate shop that sponsored my vid, funded a trip to Port Elizabeth and it was super-productive. All the choms came through on that trip. Just about all the enders were filmed there. It’s a big regret that I didn’t get to film in my hometown of Durban for the video though.

Any interesting stories from the filming of this video?
Oh man if you are filming a full length in South Africa you bound to see some crazy shit go down.
That scene with the lady throwing that big ass rock into the windows was wild. It looked like she was wearing a security uniform so I think she must of got fired and then took out her frustration by smashing these shop windows. I think she was high as shit on something too. I wanted to get closer but was scared she was going to throw that rock into my MK1 lens. I was filming my homie from the States Chinner and he was almost in the tree when I saw him.
There’s also this old demented man in Seapoint that always busts us which is always hilarious. You can see him in the beginning of Dlam’s part and right at the end of the credits. I think he either moved out or he had a heart attack because we don’t get busted there no more. Poor man was shook.
Skating with the junkies around Civic Centre is always interesting. They normally mellow and mind their own business; you just don’t wanna be falling on them needles. 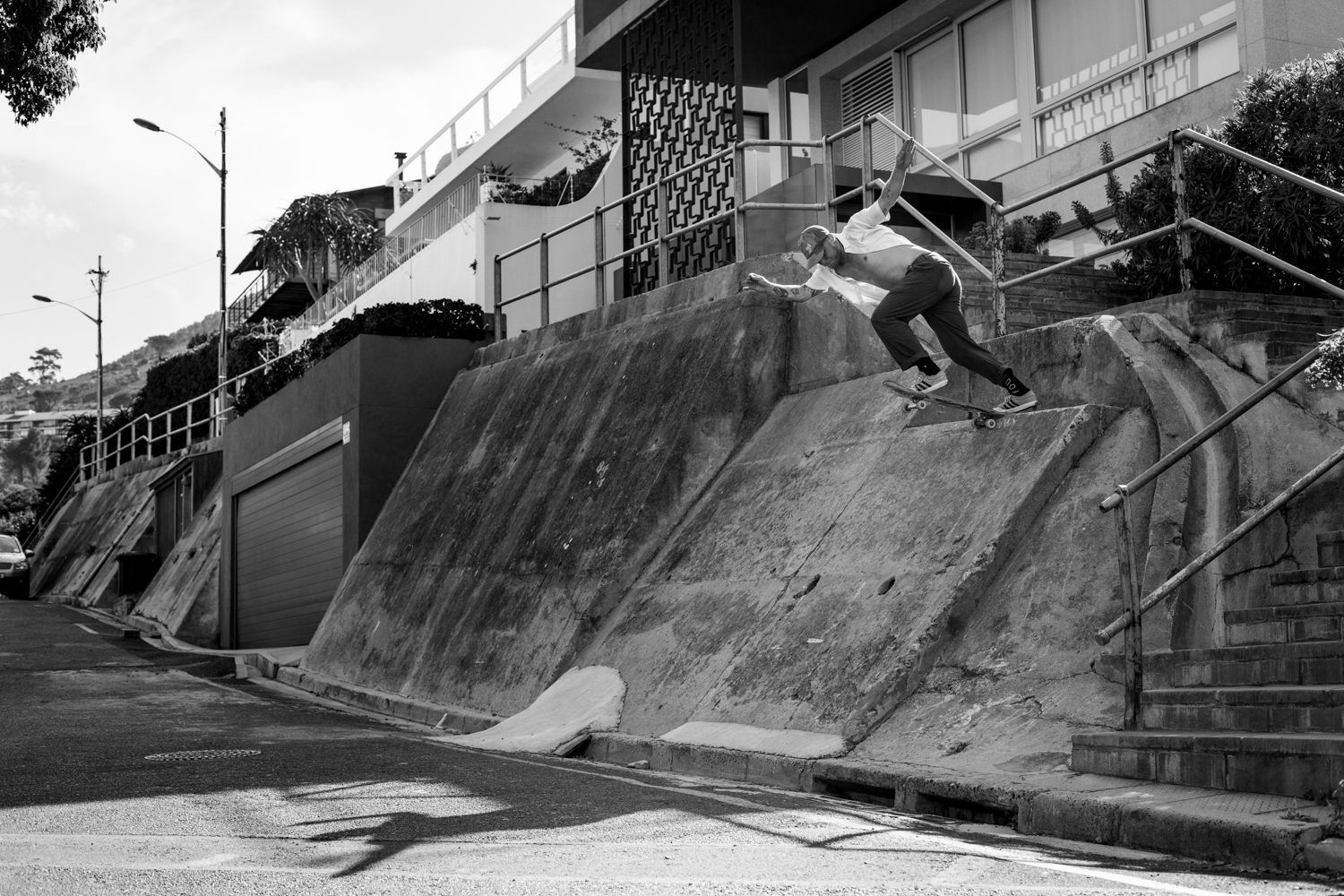 You used to live in London right Ryder? Stoked you had a premiere here…
I was so stoked you guys made it happen. Big ups to Trizzo and you guys at Free! Was real bummed I couldn’t make it out there for that. Yeah I lived in London with Yann and our homie Lil Dog. It was wild times out there. It was your classic hustle out there dodging landlords, three dudes in one small room, two in the bed one on the floor rotating. We got kicked out of every apartment we stayed in there. But good times none the less. I wanna make it out there again sometime this year.

What is ‘Where to from here’?
Where To From Here is a production agency focussing on content creation inspired through skateboarding, travelling and photography. It’s run by the homie Pieter Retief who’s got a killer part. Pieter is a key player in the skateboarding industry of South Africa. Where To From Here’s past projects include Missing a skateboarding film shot in Bangkok, Thailand and The Royal Wheelie, a skate/cycling trip through South Africa. The vision is to keep generating content that stays true to what he believes in with the support of brands or on his own accord. Give @_wheretofromhere a follow! 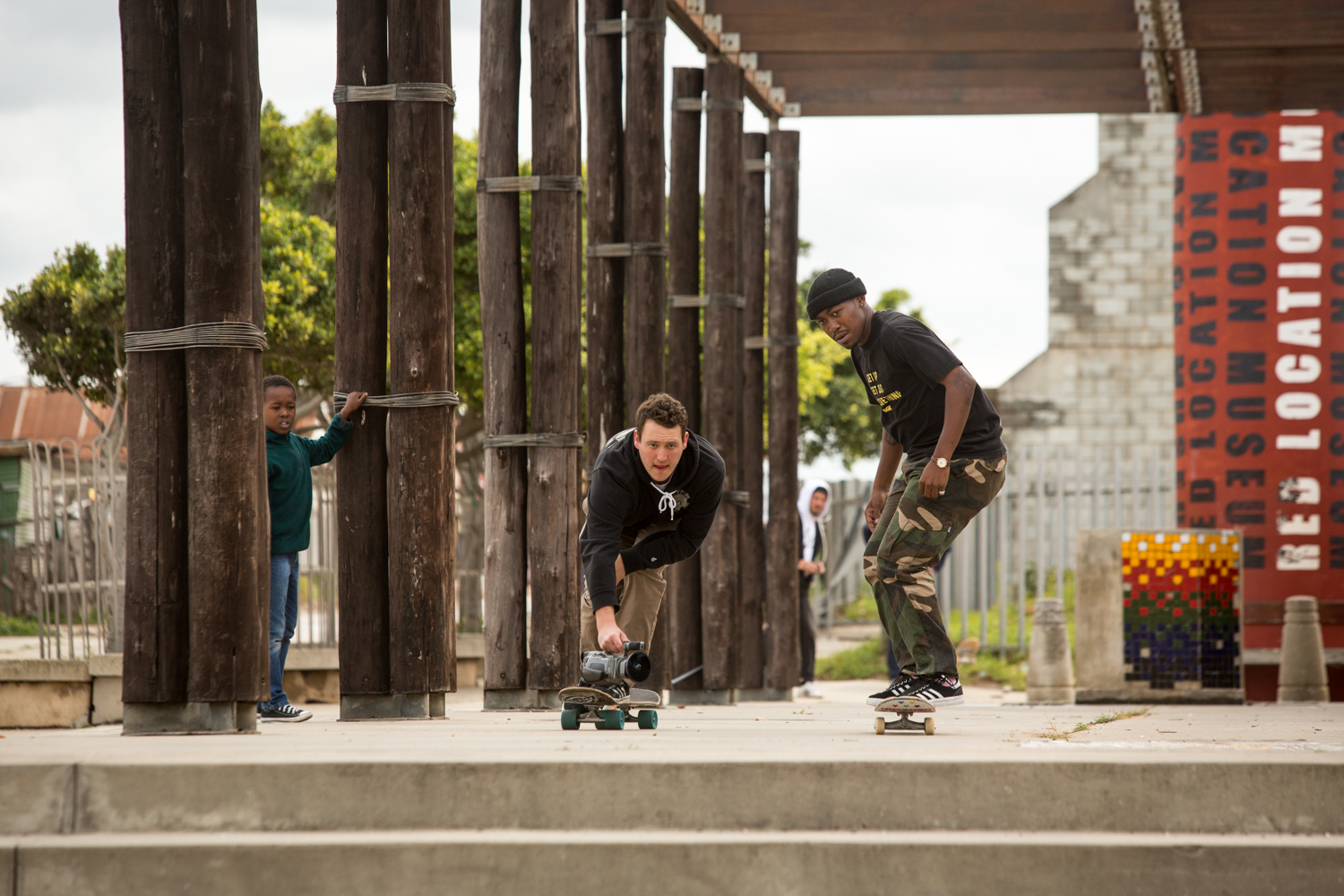 Can you talk a little bit about each of the guys in the vid:

Dlamini Dlamini: Dlams is our tech dude. I liked his part because it shows a different side to his skating. More hill bombs, powerslides and wallrides, which is different to him skating perfect handrails and stairs in Cali. These streets ain’t loyal.
Filming Zoh zoh would always start with a few beers and end with a good few. Hope you can’t tell in the filming. I guess that’s every time I film.

Justus Kotze: Justus is one of those assholes who is good at everything: skateboarding, music, photography, art… I heard he can surf and he even films good which is a bonus.
It was a pleasure filming Justus for this video. Just about every time we film we get something. Super consistent with good trick selection and style. Makes the filmer’s job easy. One of the standout parts for sure. 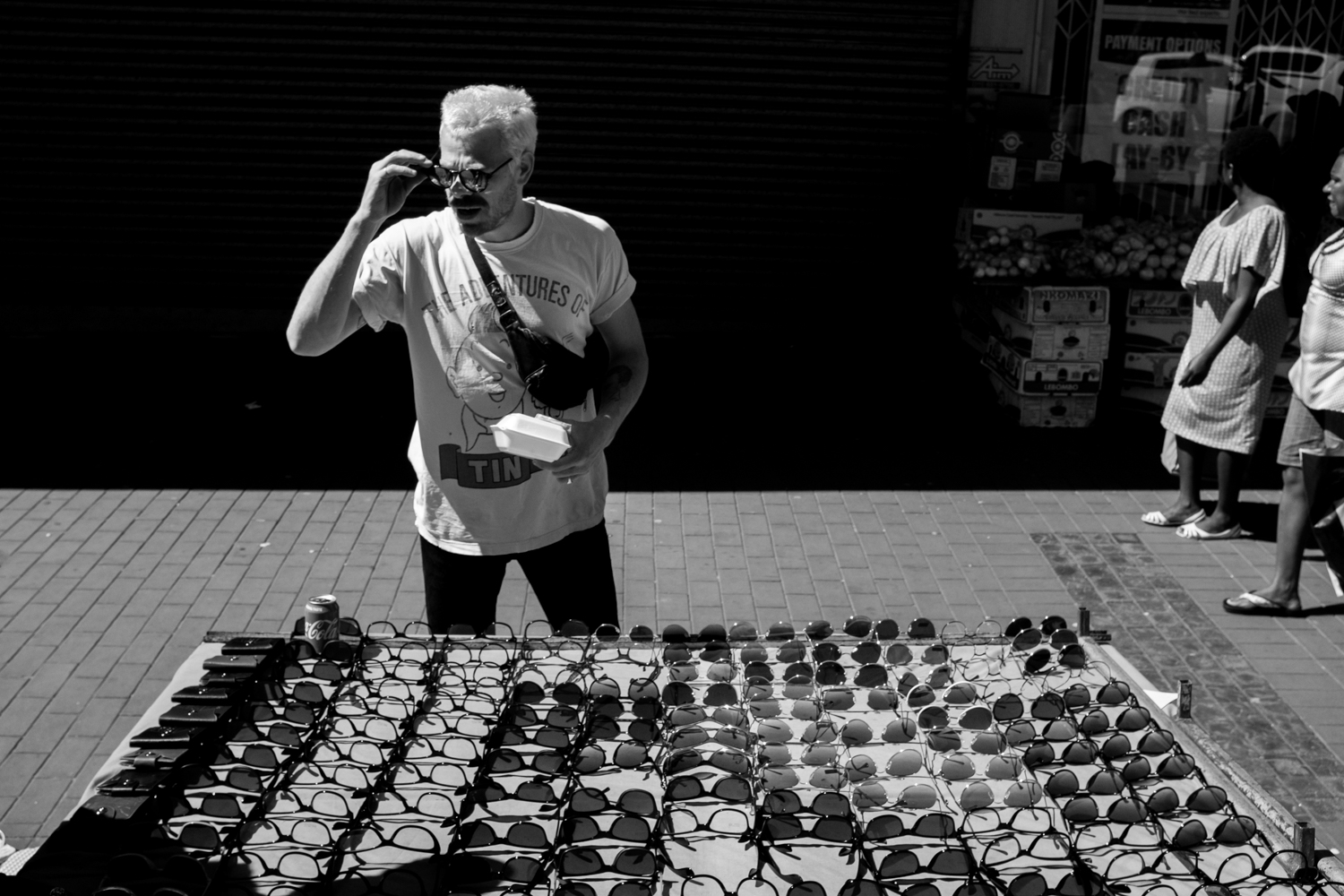 Justus Kotze trying on some shades to protect from the African sun. Ph. Sam Clark

Pieter Retief: Pieter got smoked filming this part. The man’s a soldier. He was MVP for sure because he was always making plans to get out there and hit out of town spots. Driving around, organising the accommodation, making sure the beers were always cold and he gets the dudes hyped up to get the clips. Thank you Pieter.

Yann Horowitz: Yann and I have been choms since we were young bucks. I’ve been filming him so long I think some of the time I tell him what to do at each spot. It was just a pity every time I went on a trip whether it was overseas or locally he unfortunately couldn’t make it. Life gets in the way ya know? His part is still sick as fuck. 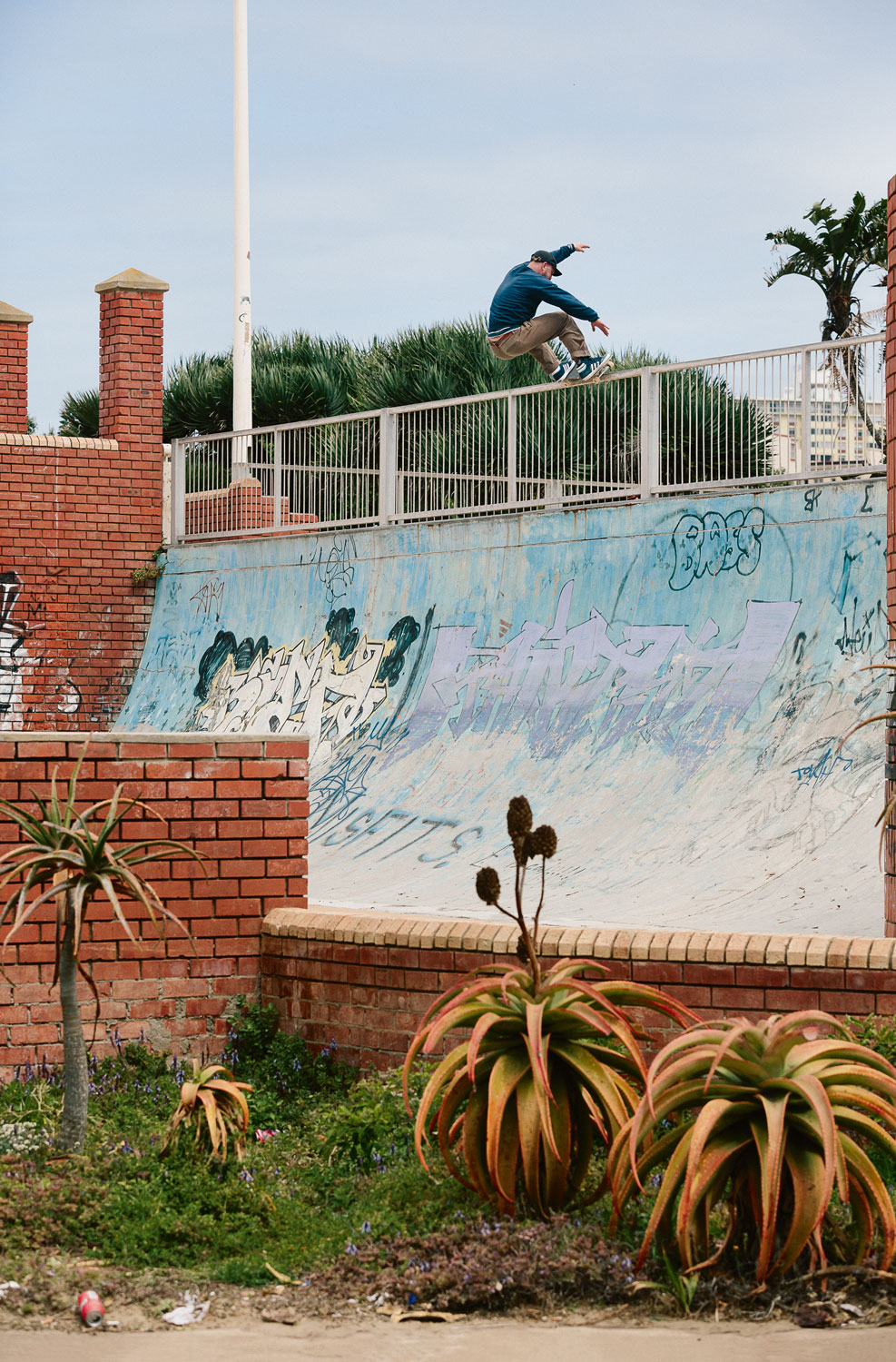 OK can you talk a bit about Yann’s ender…
We were out in Port Elizabeth and we decided to stay an extra day just so that Yann could get this 50 pull in. Yann and I ended up having an all-nighter the night before. One of the PE locals even crashed his Dad’s car that night.
We got to the spot early with no sleep and it was raining at the time. We didn’t even have a motorbike to tow Yann in. The homie Leslie back in Cape Town made a Facebook status asking if anyone In Port Elizabeth has a bike and is willing to tow Yann into this beast. What were the chances of this going down?
Next thing this dude pulls in with a fucking Dakar bike and the rain starts to clear.
I got some morning beers to hype Yann up and to make us feel semi normal. After about 30 minutes of nearly killing himself and a few fattie to flatties Yann conquered the beast. That night was a fun one. 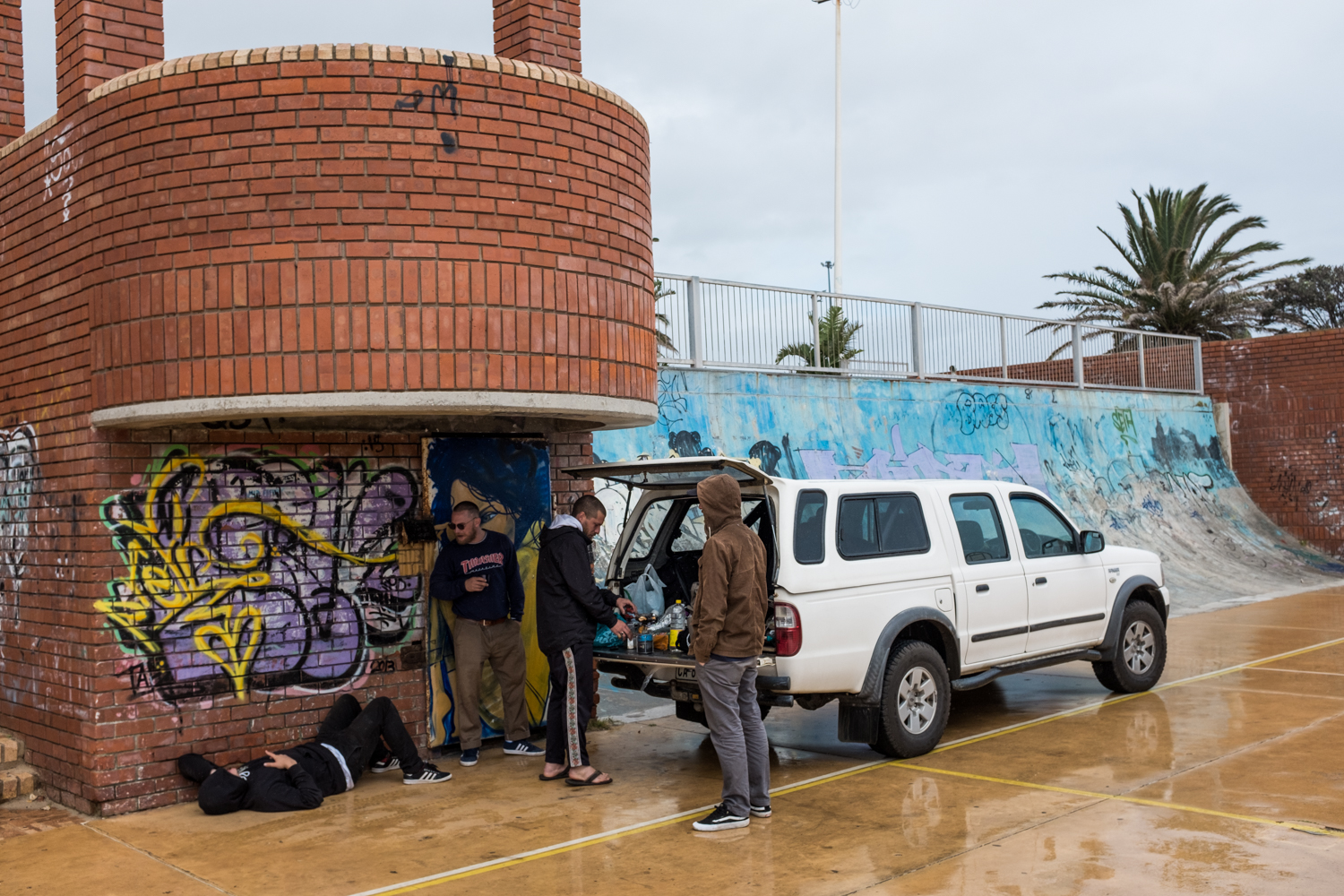 We had arranged a guy with a motorbike to meet us at this spot on the last day of a filming mission in Port Elizabeth before the ten hour drive back to Cape Town. 8am came and it was pissing with rain! we decided to wait it out and organise another tow in. 4pm a couple of games of scrabble and many beers later the 50-50 to fakie on the cover went down! Then the drive home… -Sam Clark

Tristan (Rudman) asks if they’ll be a Mild & Spicy?
Yeah for sure. I think a lot of homies were touched they didn’t make the cut so I’m sitting on a bit of footage. Will try bring it out in the next month or so.

What’s next for you and the choms? Another vid? Any travelling?
I definitely won’t be filming a full length anytime soon. Although I know Baseline Skate Shop wants to do something.
Who knows maybe a lil’ company starts up with the chaka choms. What hasn’t been done though? I wanna make a hot sauce. Maybe sponsor some dudes and make some spicy edits. I would love to get on some trips and film some edits.
Def gonna try hit Europe this year. Hopefully see you guys soon. 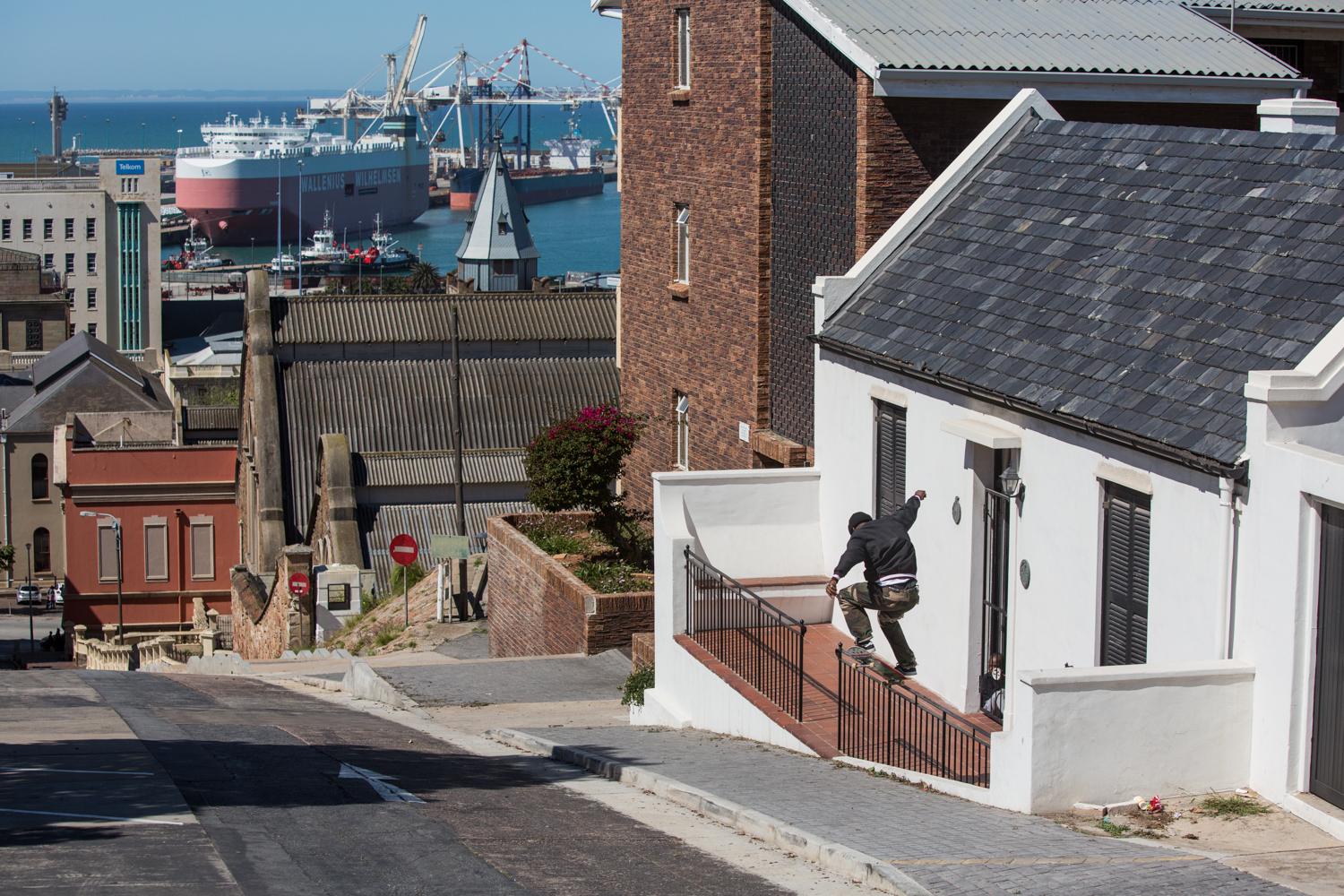