Tim Zom is not a Zombie 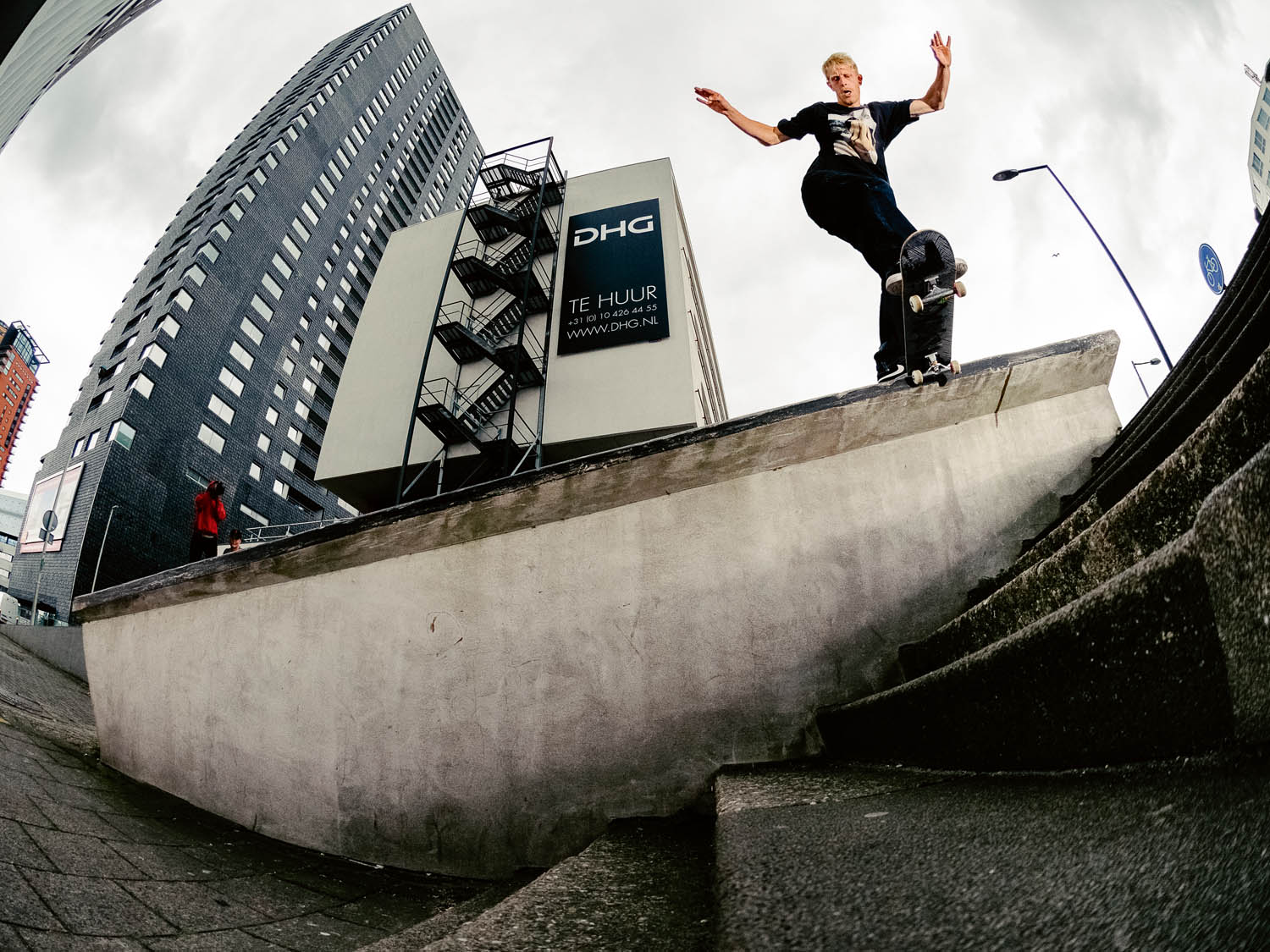 For this piece my journey started with a mandatory viewing of Zombie (2014): the ‘critically acclaimed’ documentary about Tim Zom. For those of you who haven’t seen it, it’s basically a very stylised look at how Tim Zom, despite growing up in a rough neighbourhood of Rotterdam and doing time in jail, managed to overcome his dark past thanks to skateboarding and his unconditional love for his wife. I’m caricaturing a little bit but that’s the general gist of it… It’s a bit cheesy but admittedly quite moving at times. Plus they interview his grandma who seemed like an absolute legend.
Anyway when I first heard about the documentary’s existence, my reaction was ‘sick, this thing has mainstream appeal, it’s exactly the sort of thing his sponsors will like, which means cheques for the foreseeable future, which in turn means lots more
of his high octane “oh shit, what’s he doing up there?!” skateboarding on our screens. It’ll be good for everyone…’ It turns out I was right about him not slowing down (his latest part should be up on the site by the time you read this) but pretty much wrong about everything else.

Yoooooo how have you been man?!
Tim Zom: Good man! It’s been a while!

What have you been up to?
I’ve just been working loads. I’ve started my own company now… I’m in construction.

Sick!
Look at this behind me! It’s my friend Alexander’s garden house; I’m fixing that up today.

Did you start the company around the time you stopped being paid to skate then?
Yeah I’d gotten married, I’d bought a house and I guess I needed to come up with a way to make money… I always liked working with my hands so I thought fuck it, why not?!

Tell me a little bit about being approached for this Zombie documentary then… What was going on with you at that point and what were your initial thoughts on the whole thing?
I’d been an Am for Skate Mental for two months, I was getting paid by Nike SB and Monster and this motherfucker Billy (Pols) from Holland got in contact with me and I guess I didn’t think about it too good… And everything got fucked up.

Go on…
I mean everything with my sponsors. Not my mood or actual skating… Because what you enjoy in skating or even your style of skating, nobody can take that away from you.

At what point did you start realising that saying yes to this thing was maybe a bad idea?
As soon as it was done… Just before the premiere Billy, the guy who made it, asked me to come over to check it out with some friends. He wanted to get my opinion, and the one thing I told him was that I didn’t want this one fight scene in there. I said I didn’t want it in there and that the people at Nike SB had told me that they definitely didn’t want it in there, as they don’t want to be associated with fighting and shit. But he kept going on about how it had to be spectacular and without it, it would be too flat, how you needed ups and downs… ‘No, there’s so much other stuff you can choose from!’ I remember saying. The next time I saw it the documentary was in the big theatre at the premiere with everybody (Editor’s note: for the International Film Festival in Rotterdam where it got second place) … And the fight was in there; there was nothing I could do about it.

Your grandma, who was heavily featured in the documentary and attending that night tragically passed away a few hours after the premiere… Are you comfortable talking about this?
Yeah she was at the premiere… You should have seen the smile on her face; it was beautiful. She had been straight away down for people with big cameras and stuff to come and film her… And once it was done, she couldn’t wait for it to come out! That’s what’s so cool about it; that she actually got to see it. 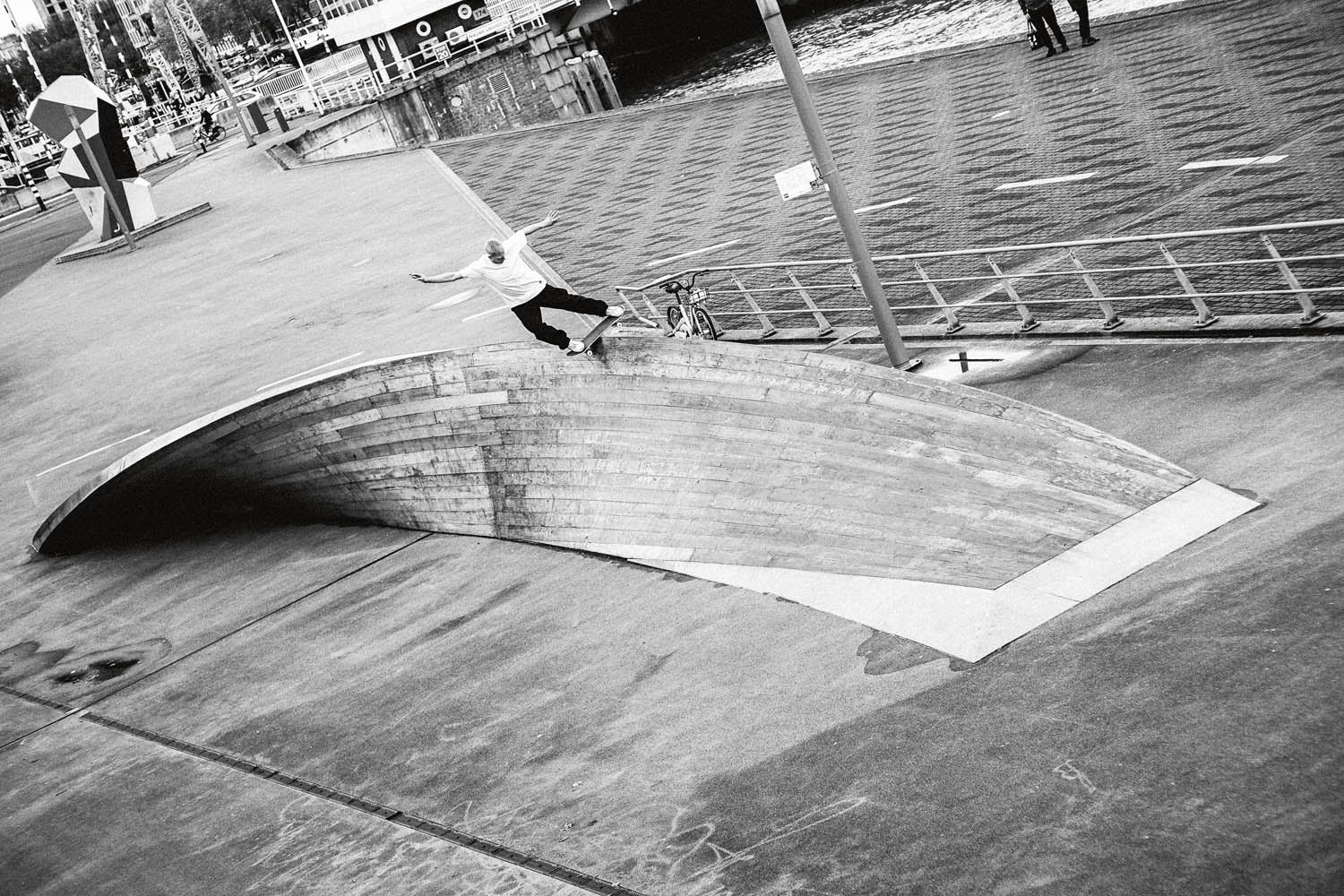 Boardslide all the way to transfer, Rotterdam. Ph. Berry Heesen

She’s amazing in it too. Everything she says in Zombie is so on point.
Ah man she was so positive… And REALLY from Rotterdam, like kind of crazy, ha ha, but would always say what she thought. She didn’t give a fuck you know? Anyway yeah around one o’clock in the morning after she got back from the premiere she walked into the living room where my uncle was chilling (he was living with her to take care of her because she was old) and she just told him: ‘Hey can you call an ambulance, I think I’m having a heart attack.’ Then they took her to hospital and that night she passed away…

Wow…
What happened with the film after the premiere? Because it was super well received at the film festival…
Yeah, what happened next was crazy. We got invited to a late night talk show to speak about it, and what do they do? They pull out that one fight clip…
And show the one thing you didn’t want in there to the whole of the Netherlands, on live television…
Yeah. And the guy I punched, he recognised me from the talk show and got in contact with the police! The next day they called me to the police station and I got in so much trouble over this fucking bullshit. I was sued 5000 euros for hitting him, had to do community service… It was a mess.

Do you still talk to Billy who directed it?
Nah man… He probably owes me money… That motherfucker sold that thing to Videoland, which is like the Dutch equivalent of Netflix.

No way! Was there an agreement about this stuff? Like if it did well were you supposed to get money?
Of course man there was a contract. 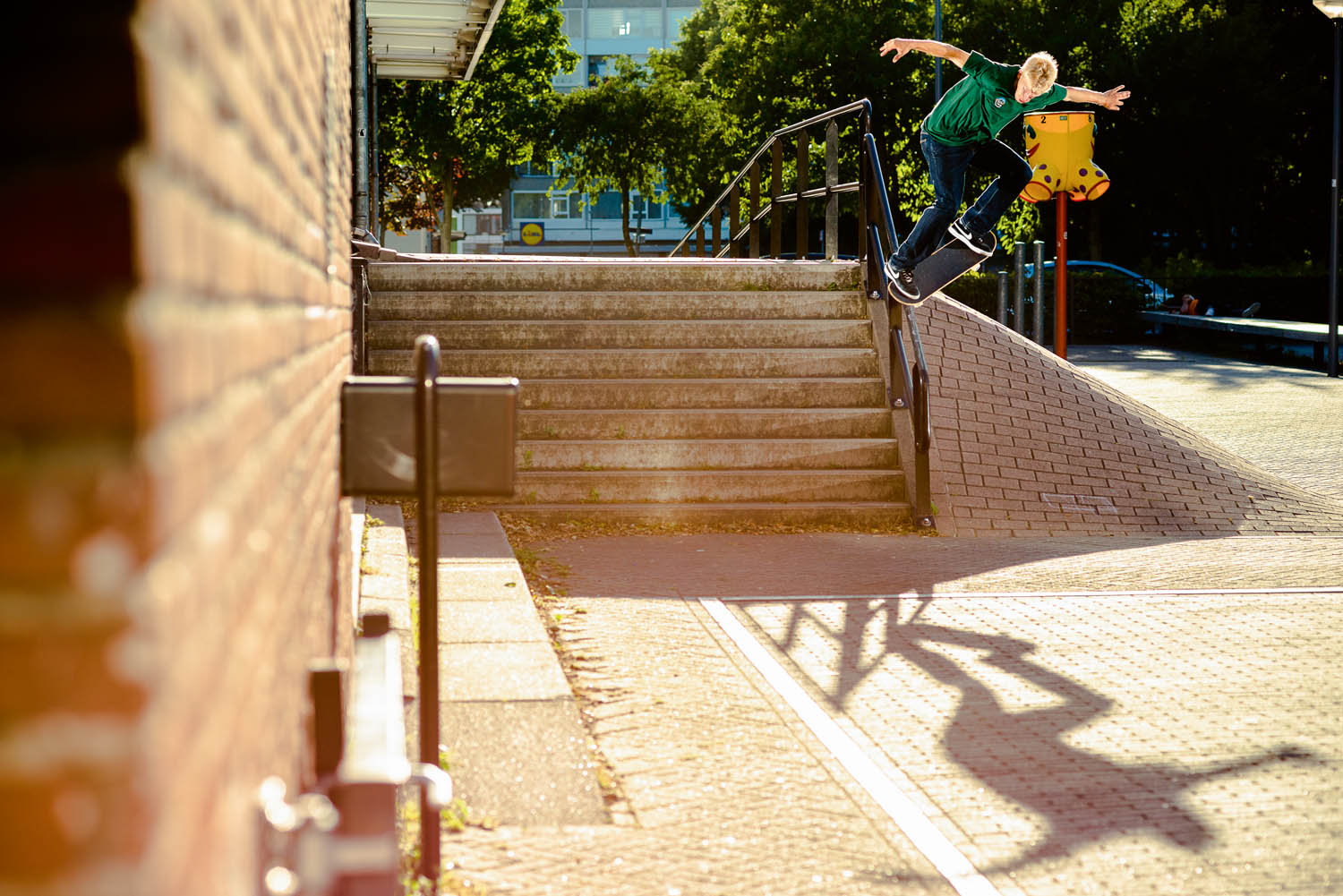 Then, as if all that wasn’t enough, around the same time the Skate Mental thing started going to shit right? What was going through your head when all this was happening?
I mean you feel it man… I put all my faith in this one guy from the States who promised me a lot of things…

As in Brad (Staba) the Skate Mental guy?
Yeah. And the way it ended… I felt lost man. It’s a complicated story but basically I was on a trip with him and couldn’t take any cash out because I lost my bankcard so I asked him for money to eat. He told me he couldn’t do it from the credit card so I didn’t eat that day. The next day I skated again and asked for money for food in the evening again but again he didn’t have it… By the third day I was becoming fucking paranoid man. I was skating my ass off…

… And you couldn’t eat!
Nah but the food wasn’t a problem man, I’m used to it. Back in the day when I didn’t have money there would be times where I wouldn’t eat for one or two days and that’s fine. That wasn’t the point. It’s that I had four or five thousand euros in my account; I could have paid for the whole trip… All I wanted was for him to pay me something so I could eat and I’d pay him back as soon as I’d be back in Holland… But for some reason he just couldn’t do that. Then half a year later I saw him in Holland and asked him what was up with the Skate Mental thing and all he said was ‘you’ve been downgraded to the European team’. And I just thought to myself… There’s not even a European team, why are you bullshitting me? What’s the real reason? I didn’t understand and it frustrated me a lot because I had nobody to talk to about it, nobody knew him that well… 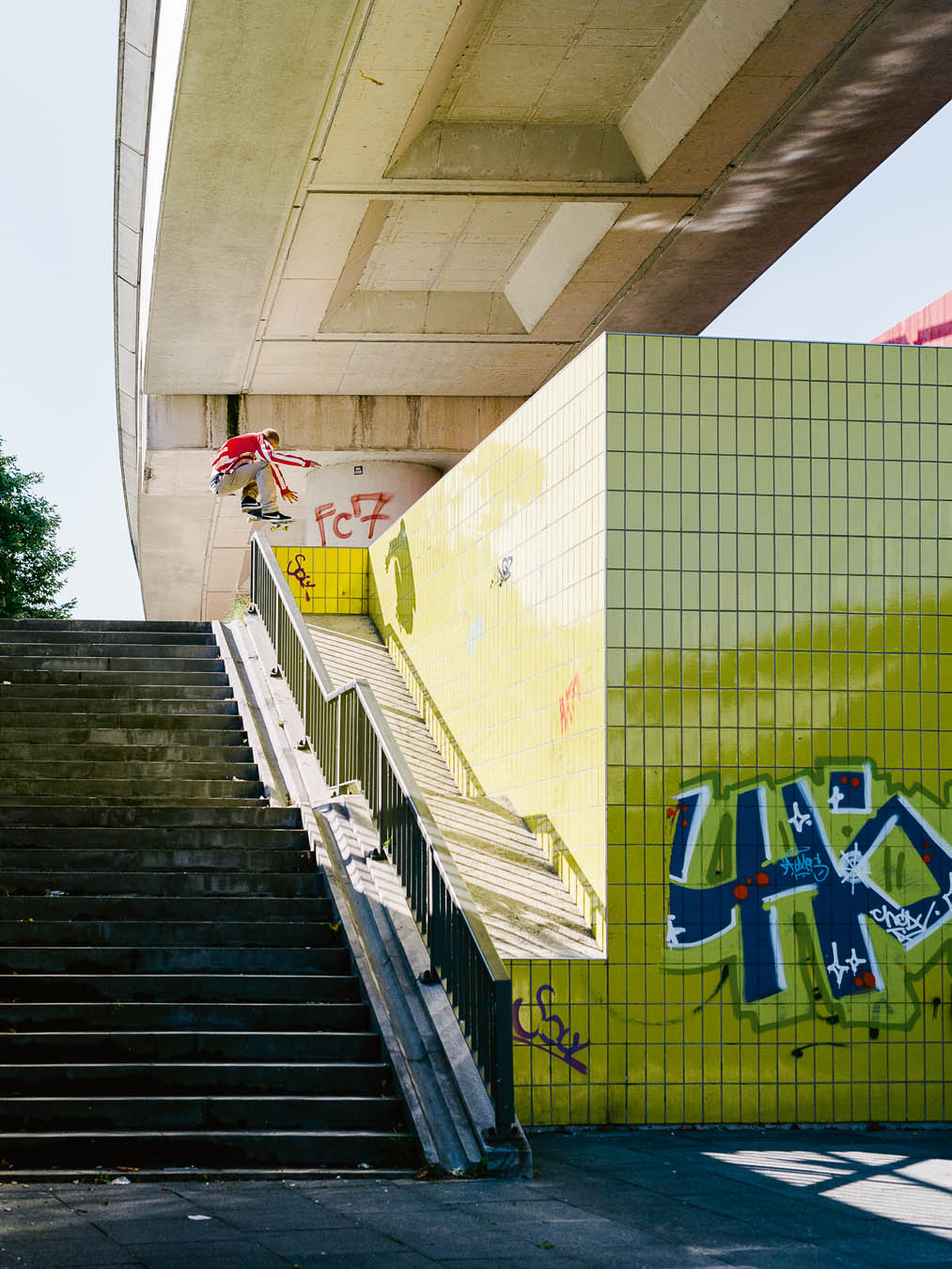 Sorry man, that sounds really shit.
The main thing is that I thought he was a good friend and that with friends you can always talk, no matter how bad it is. It fucked with my head man; I really didn’t know what to do. And when I turned Am for them my father had just died so it was quite a difficult period for me anyway… So I just put it away in a corner of my head and just kept skating.
Then of course the documentary came out with that whole fight scene bullshit that Nike said they didn’t want in there…

Which ended up on national TV.
Yeah I think that’s why after that Nike didn’t want to deal with me or do anything with me anymore… It was the final straw.

It really shows how fragile your position as a paid skateboarder can be sometimes… A few ‘bad’ decisions and it can all be over. Not that anyone could have predicted that Zombie would lead to such a mess…
Yeah… But also, that’s life man. When you take difficult decisions, sometimes the decision isn’t good and you have to live with it. And all this stuff? It’s nothing man. When I was in jail I was with people who made some bad decisions, real ones – guys that are in there for 25 to life. My neighbour he was in jail for three murders… This is peanuts. I’m still living, I’m outside, I’m smiling. I really enjoy having my own company, I’ve built skateparks, houses, I’ve been renovating places… And I still get to skate loads. Like even if I work 10 hours I’ll go to the skatepark on a Wednesday night. It’s getting cold but on the weekends we still go street skating and we’re still getting footage!

Right after we finished recording this interview Tim sent me a funny selfie with his dog. Booba’s massive, like his head is bigger than Tim’s… The photo’s pretty cute. Anyway, as I was staring at it, I remembered one of the first things I read about him: ‘Tim Zom is the kind of guy who goes to jail, gets out, and immediately jumps down some gnarly shit.’ It was the line Thrasher wrote underneath his Skate Mental part, which is how most of the world discovered his skating.
We’re not going to try and ascertain whether Billy Pols voluntarily fucked Tim over with this documentary. One thing is certain though: he was desperate to make that shoe fit. And that doesn’t mean he didn’t admire him: when I called Billy he told me how refreshing it had been to spend time around someone so pure; how once when they were eating in a restaurant, without saying a word, Tim had silently gotten up from his seat to give his hoodie to a homeless person he noticed waving from outside… It’s just that we as ‘the media’ need to be careful about how we cultivate the images of our heroes, because it has consequences. Tim is not a Zombie. 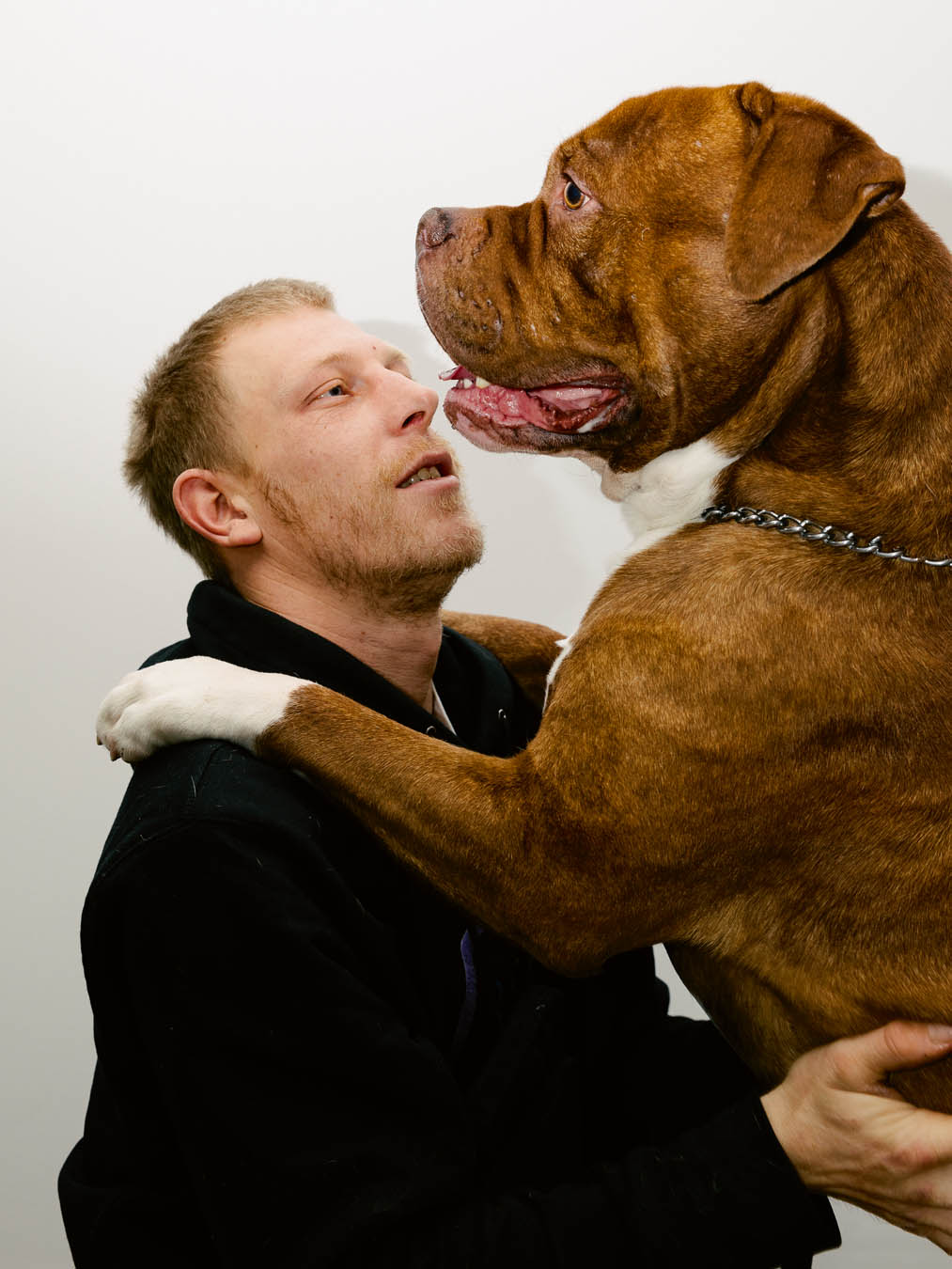